Speed and noise. Far be it from me to tell you the reasons you should be opening your wallet or purse to extract $573,966 but, if raw pace and the soundtrack to match are your primary concerns, the Lamborghini Aventador SVJ Roadster has twelve cylinders and a removable roof to sell you.

The theory behind the Italians’ most expensive production series car has been thoroughly demonstrated already. The coupe version has the same 6.5-liter naturally aspirated V12, the same 531 lb-ft of torque, and the same 770 horsepower as the convertible. You get all-wheel drive too, along with four-wheel steering. 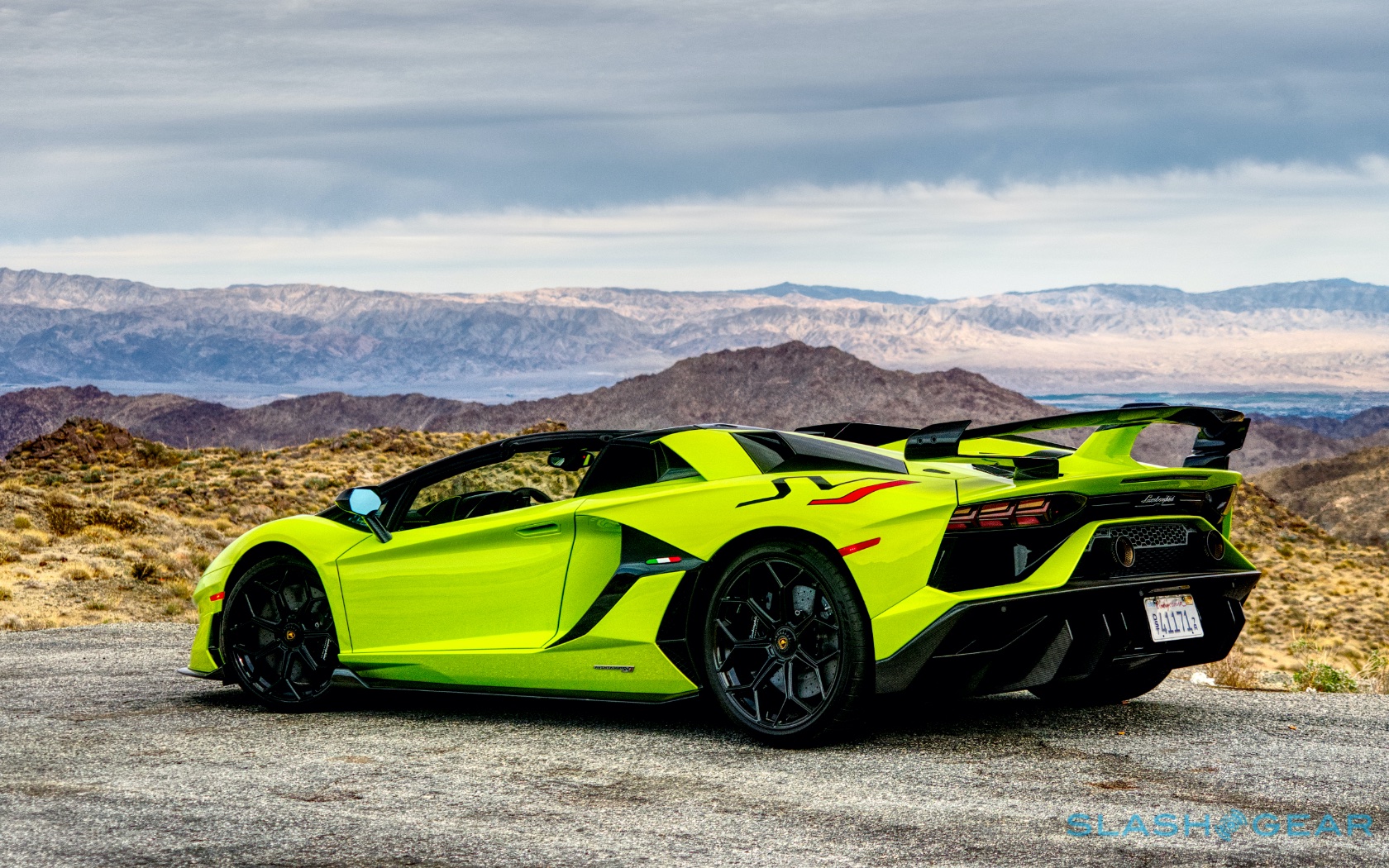 Slicing off the roof – and then adding some stiffening – adds 110 pounds to the curb weight, and that adds a tenth of a second to the 0-60 time. Still, we’re talking 2.9 seconds versus the 2.8 of the coupe. Top speed remains in excess of 217 mph.

Like the tunnels running beneath Disney Land, the SVJ’s creased and crenulated bodywork hide secrets of their own. Aerodynamica Lamborghini Attiva is now in its second generation – hence ALA 2.0 – having debuted on the Huracán Performante back in 2017, but it’s no less fascinating in its approach to aerodynamics. 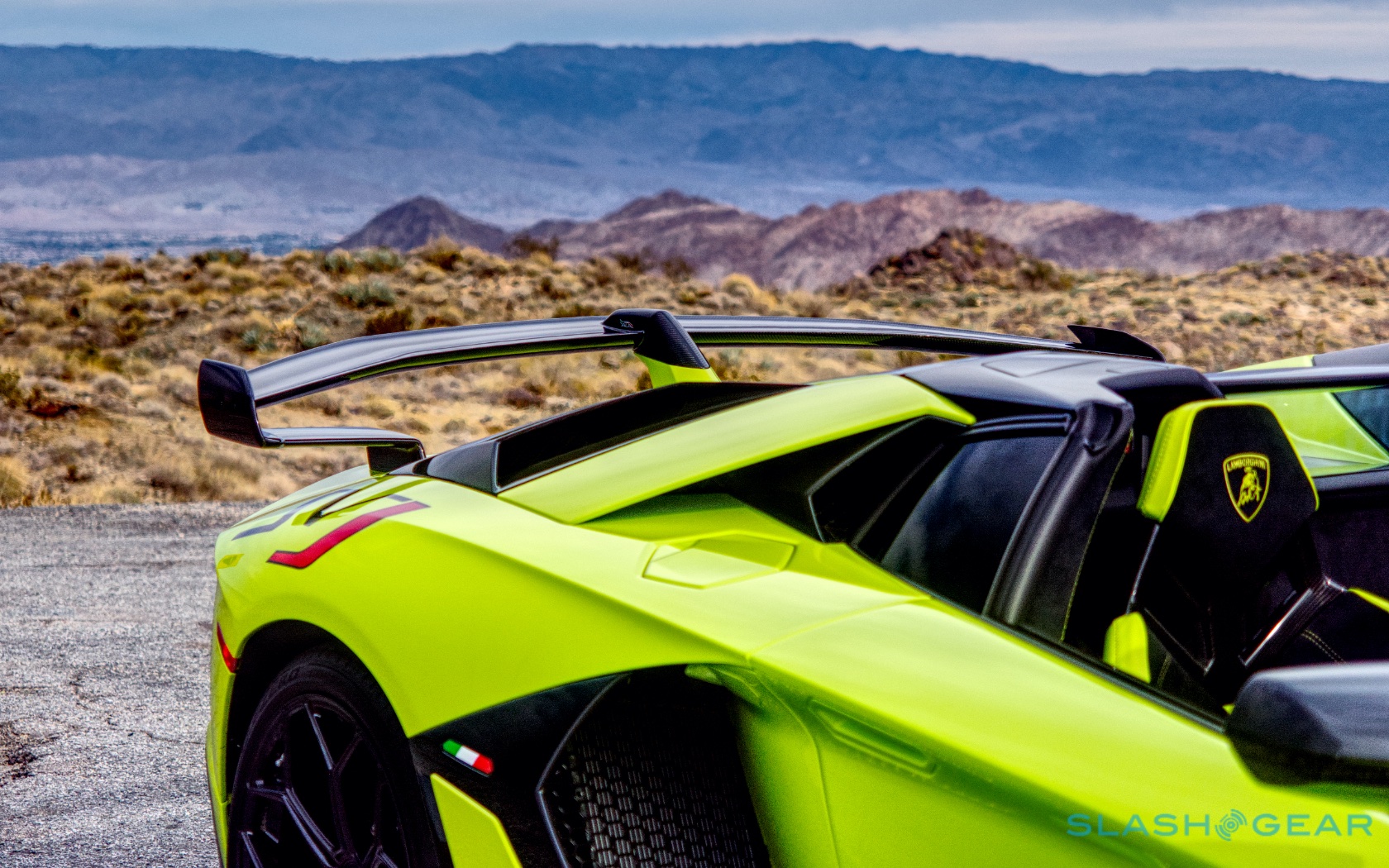 Rather than a vast, position-shifting wing, morphing bodywork, and active spoilers galore – clever, sure, but also heavy and mechanically complex – ALA 2.0 goes all Last of the Airbenders as it balances downforce and drag. At the front, small panels can hinge open in the splitter and the hood, guiding airflow along the underbody. At the same time, two flaps at the base of the spoiler’s central support open, allowing air to flow up and out through a series of holes along its trailing edge. Together, they cut the car’s drag and maximize its straight-line speed.

For grip, though, you want downforce. Then the flaps flip, guiding airflow over the top of the Aventador and pressing it to the asphalt. When you get to a corner, ALA 2.0 can open just one of the two spoiler flaps, airflow rushing through only one side of the spoiler, and increasing downforce on the left or right side alone as the Roadster pivots. 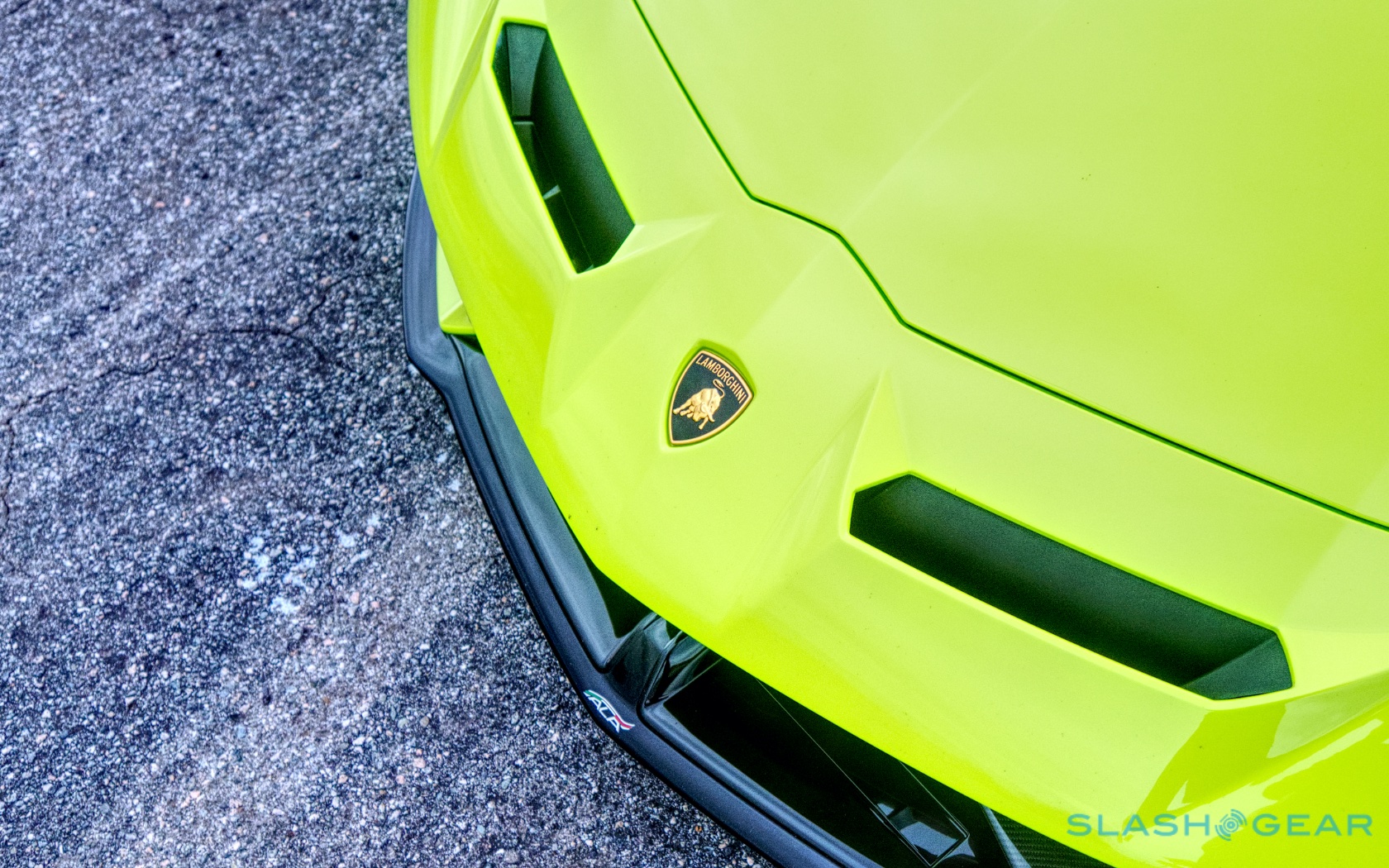 It’s epic in its elegance; invisible to the driver, beyond the feeling of a near-$600k car crisply making turns that simple physics might suggest should end otherwise. ALA 2.0’s behavior is controlled via the four drive mode system – Strada at one end for the street, escalating through Sport and then Corsa for the track, with Ego offering customization over things like engine, transmission, and suspension – with a live status graphic in the digital cockpit display if you’re foolhardy enough to look away from the road. 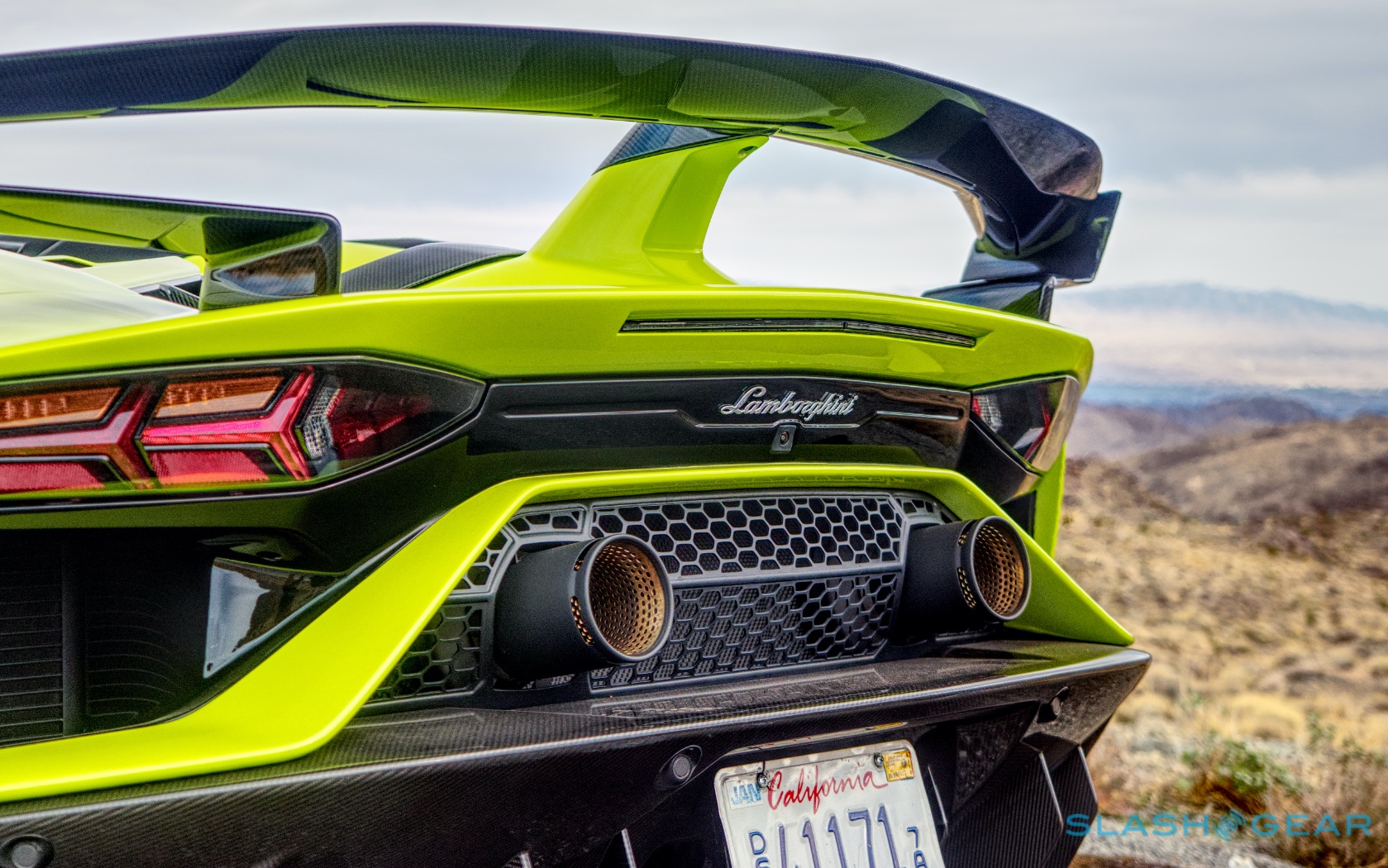 The smaller, lighter Huracán Performante is always going to feel more nimble, but the Aventador SVJ Roadster’s combination of bombast and brutal power are intoxicating in their own, special way. A deeply excessive way. Unlatch the carbon fiber roof panels and every pop, gurgle, howl, and roar of the engine are yours to savor. A tiny rear window powers down to let in even more engine noise and general bluster. 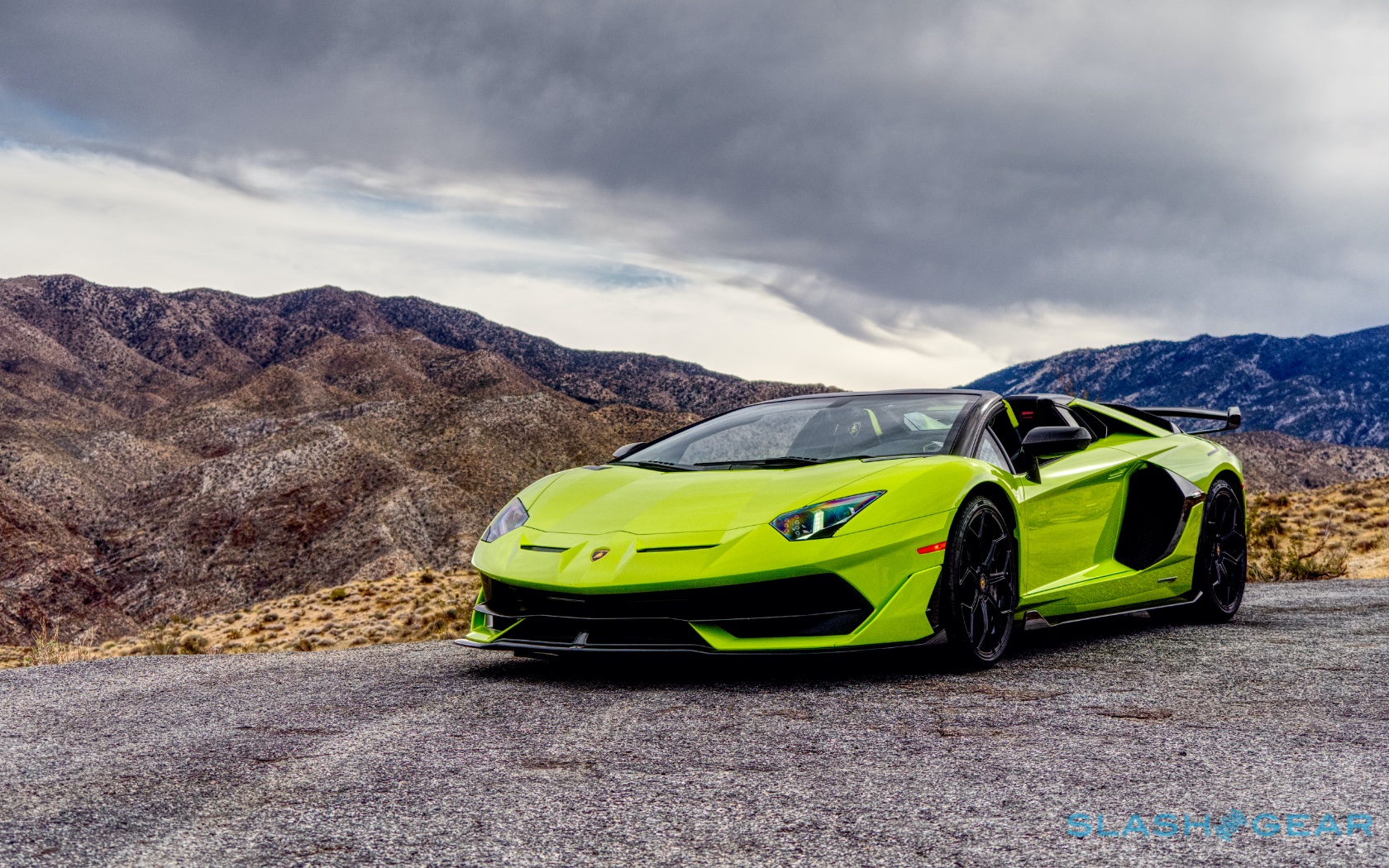 License-shredding speed is terrifyingly easy to achieve. Luckily slowing down is almost as much fun, a combination of ridiculously effective – and dinner-plate-dwarfing – brakes and the knowledge that you’ll soon get to hear that V12 thunder again.

With the hills around Palm Springs to play in, Lamborghini’s choice of venue for hosting us for the drive, the Aventador SVJ Roadster’s limits were far, far off in the distance. You’d need a track to get anywhere close to them, in fact, plus a helmet, and that would only block your ears from the audio treats in store. 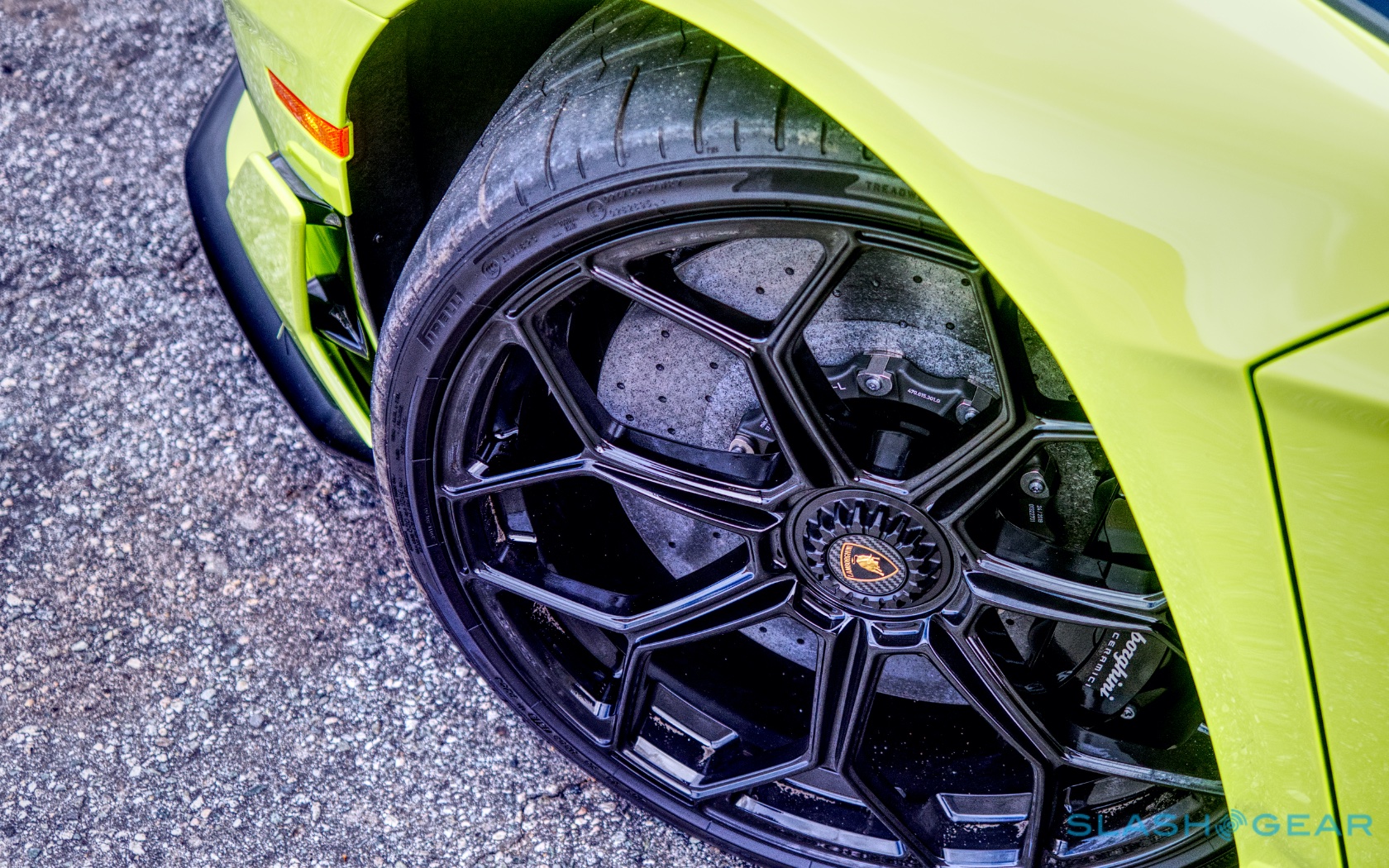 Learn to trust the slick aero, the all-wheel steer, and the sticky Pirelli Corsas, and the Roadster hides its curb weight well. It’s a big car, sure, but it blusters past any complaints of that with torque, bravado, and up to three degrees of twist on the rear rubber. The Aventador’s seven-speed transmission is clearly outperformed when it comes to smooth-shifting by the dual-clutch system in the Huracán, its jerkiness particularly noticeable at low urban speeds (yes, when all eyes are on you in your “Verde Scandal” drop-top), but its cog-juggling comes into its own when urgency is more important than finesse.

There are other signs that this isn’t the car for your commute. Practicality is borderline-laughable: the roof occupies most of the already-small front trunk, along with a two-piece air diffuser that can be slotted onto the windshield to guide most of the wind (and grit) over the top of your head rather than directly into your forehead. With the V12 at the back, and no glove compartment, you’re left to squeeze your bag either behind the seats or down by the passenger’s legs. 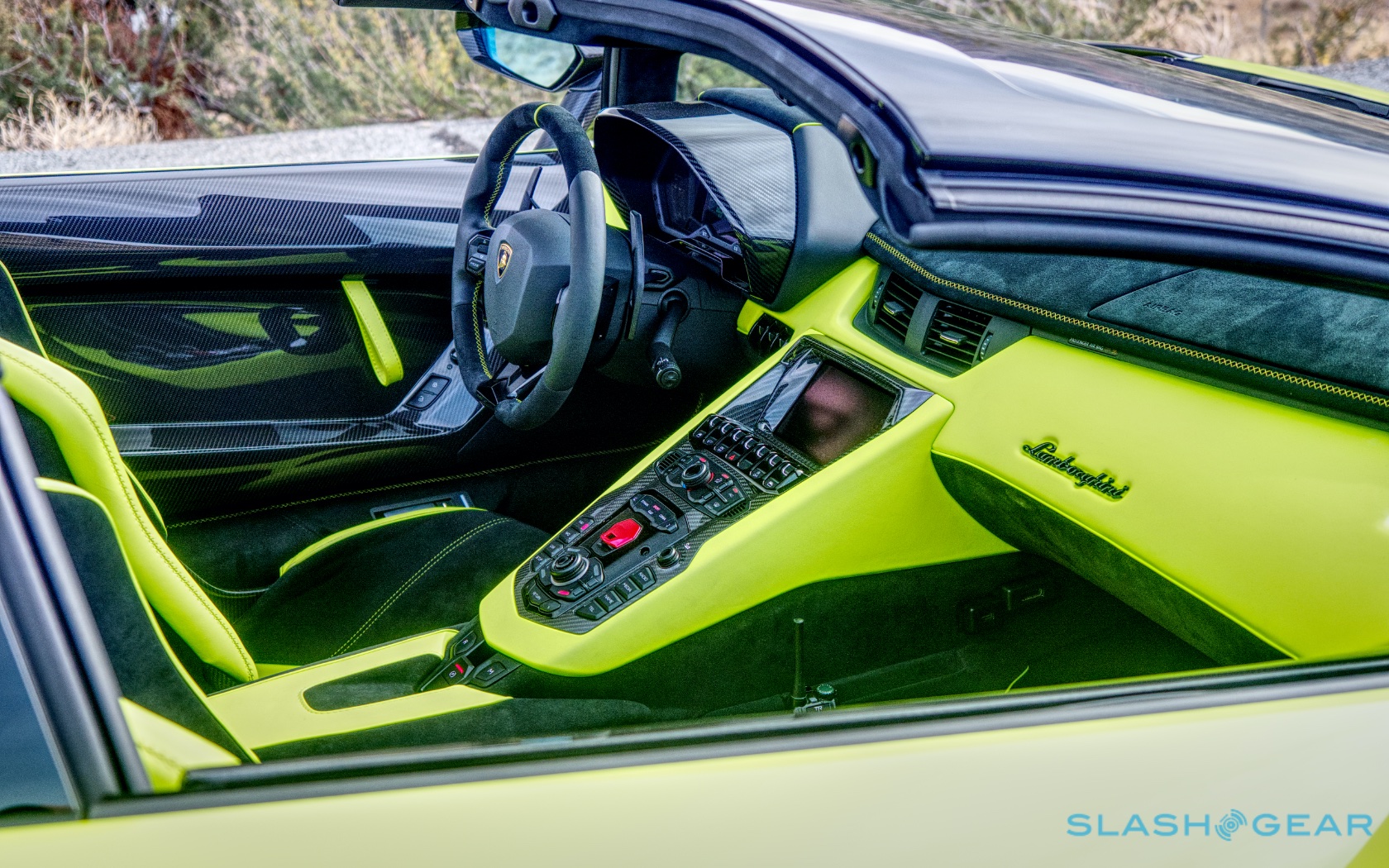 They’ll have a fairly regular chance to stretch them, though, since the Aventador SVJ Roadster guzzles fuel with alacrity. Lamborghini quotes 11 mpg on the combined cycle, but I fear the person with sufficient restraint to achieve it. Push even remotely hard and you’re down in single-digits and watching the fuel gage drop almost in real-time. No, I don’t think the typical owner will care about the cost, but don’t expect the clunky infotainment system to help you find gas stations with the super-high-octane juice the V12 demands.

What’s interesting is that Lamborghini can clearly do “practical” if it chooses to. You could have a Huracán as a daily-driver, and the Urus is positively family-friendly. If anything, we should be surprised – and grateful, so very grateful – that the Aventador SVJ Roadster exists at all. 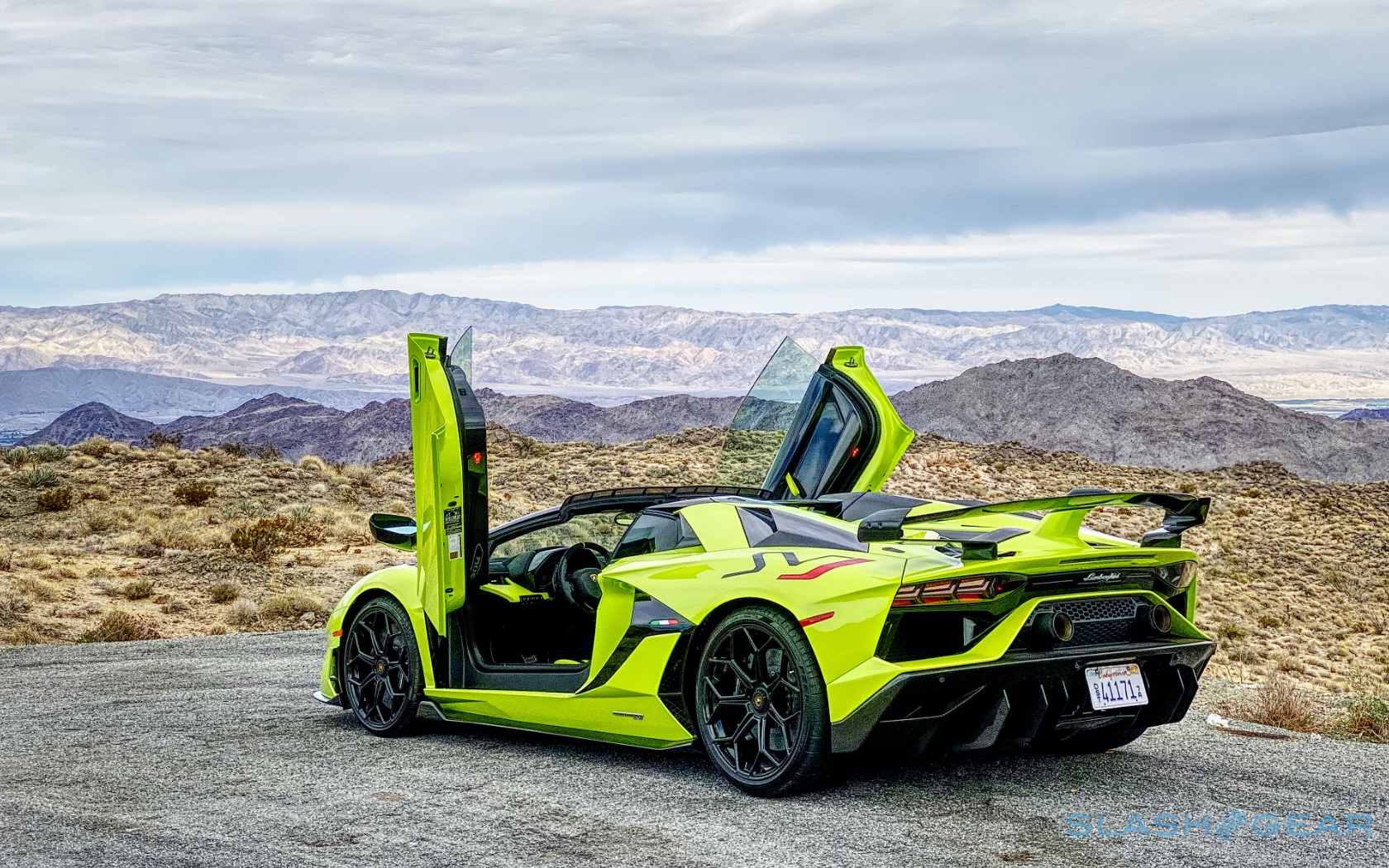 Just 800 will be produced. Beyond that, you have to wonder quite how long the simple recipe of a natural V12 can hold out. Lamborghini is investing heavily into cutting-edge battery tech and, though a pure-EV is still far from feasible for the automaker’s purposes, it’s dropping heavy hints that hybridization is the future.

And look, that’s no bad thing. Hybrids are great, what with their lashings of instant torque, and I’m fascinated to see what Lamborghini’s engineers can do with the best of gas and electric to play with. A ten year run as a supercar consistently worthy of posters on bedroom walls is nothing to be ashamed of. If the Aventador SVJ Roadster really is piping out the end of an era, we couldn’t have hoped for a better song.