The 2018 Lamborghini Huracan Performante doesn’t want to kill you

“Don’t crash.” Two simple words, but with a lot of emphasis when you’re talking about the brand new 2018 Lamborghini Huracan Performante. The line-up of professional drivers responsible for coaxing faster and faster lap times – not to mention more and more trophies for the automaker’s awards cabinet – currently facing me does nothing to disabuse the knowledge that, on a track, I’m a novice at best. Suddenly, the idea of planting a raging $280k supercar into a wall seems all too possible.

Lamborghini, it’s fair to say, markets its fearsome reputation well. In age when a Bugatti Chiron can take you to 261 mph with little more than a shrug, while Ferrari has become the de-facto choice for the Riviera GT jaunt, the raging bull promises nothing but pure, unbridled aggression. The Countach may be long behind us, but its spirit lives on.

Couple that with a price tag that puts even the “base” Huracan out of the reach of most, and it’s no surprise I was feeling apprehensive about the Performante, the most potent of its clan. It may be too sneeringly aloof to say it, but you can’t spend too much time near – or inside – a modern Lamborghini without getting the impression that it might want to kill you.

The Performante more than most, in fact. It’s lighter, more agile than the usual Huracan: Lamborghini has been pushing forged composites as a way to deliver strength without heft, chopping carbon fibers and then embedding them into a matrix of resins. It allows for bodywork and chassis structures that are as strong as traditional woven carbon fiber, but allow for complex geometries to be molded, and won the automaker the 2016 JEC Award for Innovation. 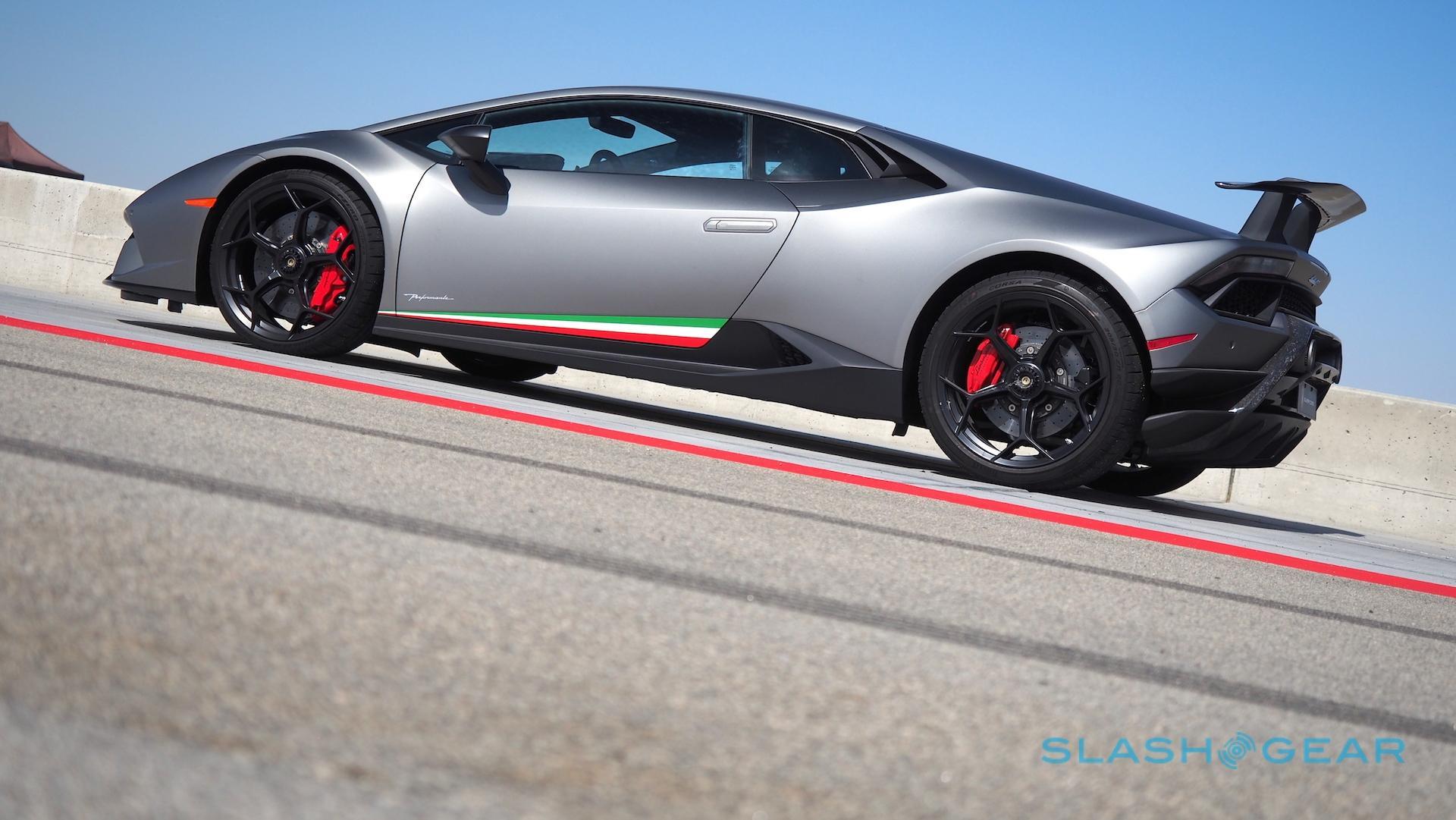 As you might expect, then, it shows up in several areas. Forged composites are used on the front lower spoiler, the rear hood, the wing, and the lower fascia and bumper. Overall, it saves around 88 pounds from the regular Huracan. 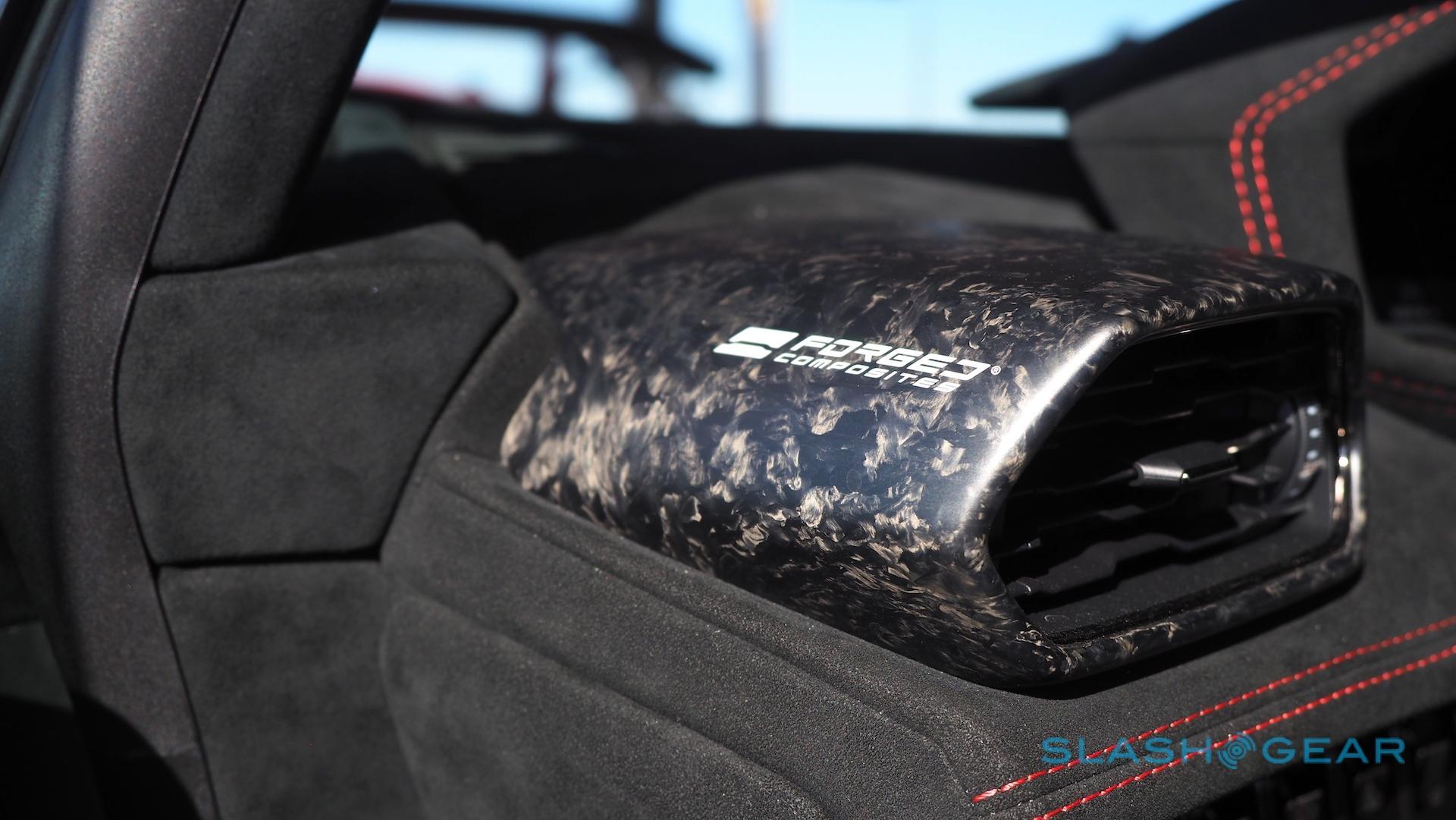 There’s only so much you can do with light weighting, mind, and so Lamborghini’s engineers looked to another problem all performance cars face. Aerodynamics are a tricky topic: on the one hand, you want your car to be as slippery through the air as possible, to minimize resistance and maximize your top speed. At the same time, though, you need downforce in order to stick to the road. The two aren’t commonly mutually compatible, yet Lamborghini came up with a solution.

It’s called Aero Vectoring, and it’s fascinating both in how effective and how simple it is. Other cars have aerodynamic features that adjust according to whether you want to increase downforce or cut drag: the Ford GT’s huge, hydraulically-powered rear wing is a prime example. What Lamborghini has done is boil that down in a fiendishly clever way. 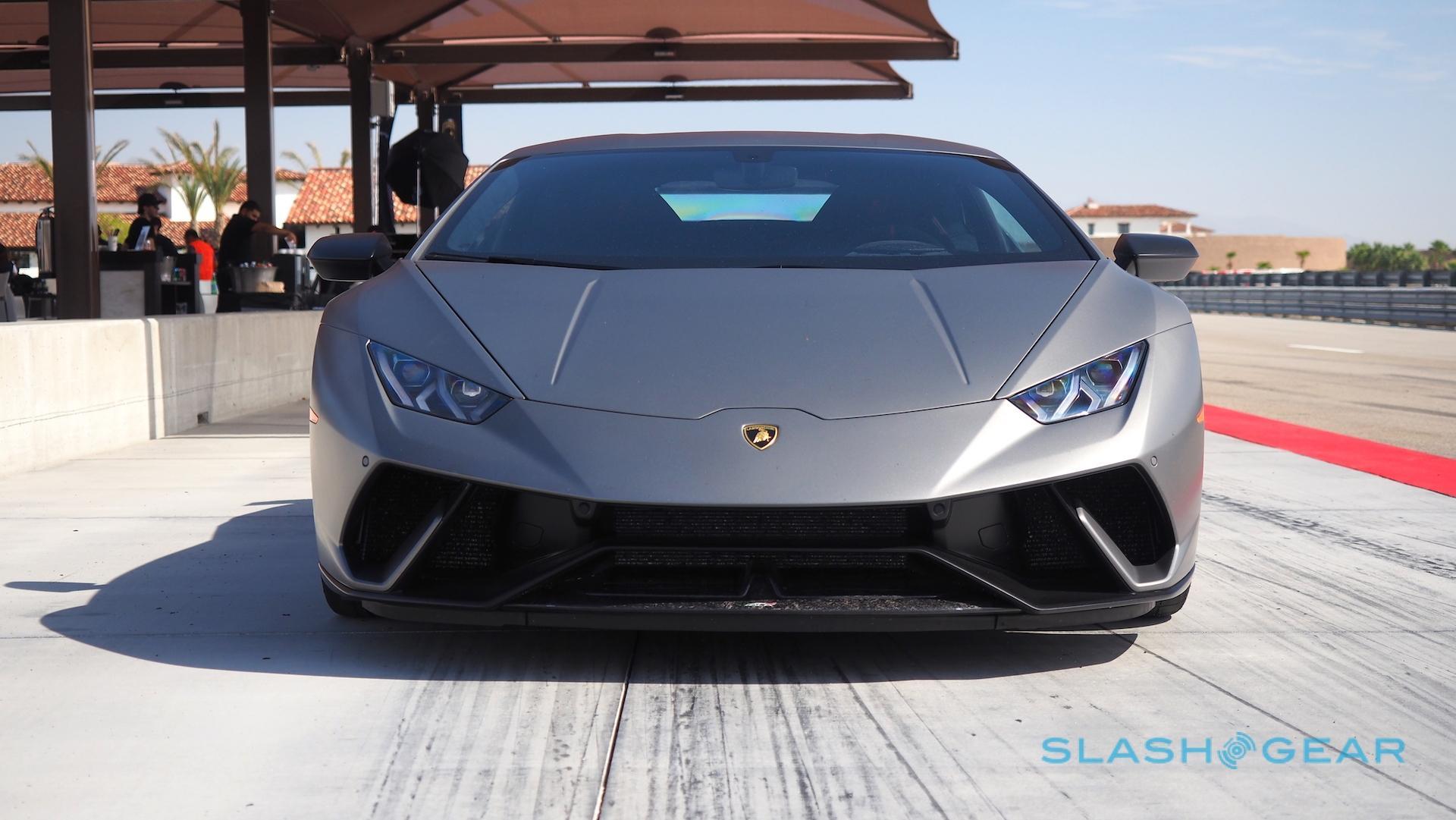 At the front, a flap in the lower spoiler can direct air either across the underside of the car or bypass it. That means the Performante can adjust whether it’s super-sticky to the tarmac for high-speed cornering and stability, or super-slippery to the air for maximum speed.

It gets even more interesting at the back, mind. At the base of each slender strut holding up the fixed spoiler, there’s a channel diving deep into the bodywork. Peer down one, and you see a tiny square flap, which Lamborghini can open or close in just 0.2 seconds. If they’re open, air flows down those channels, up the spoiler supports, and then out of a row of vents on the underside of the wing. 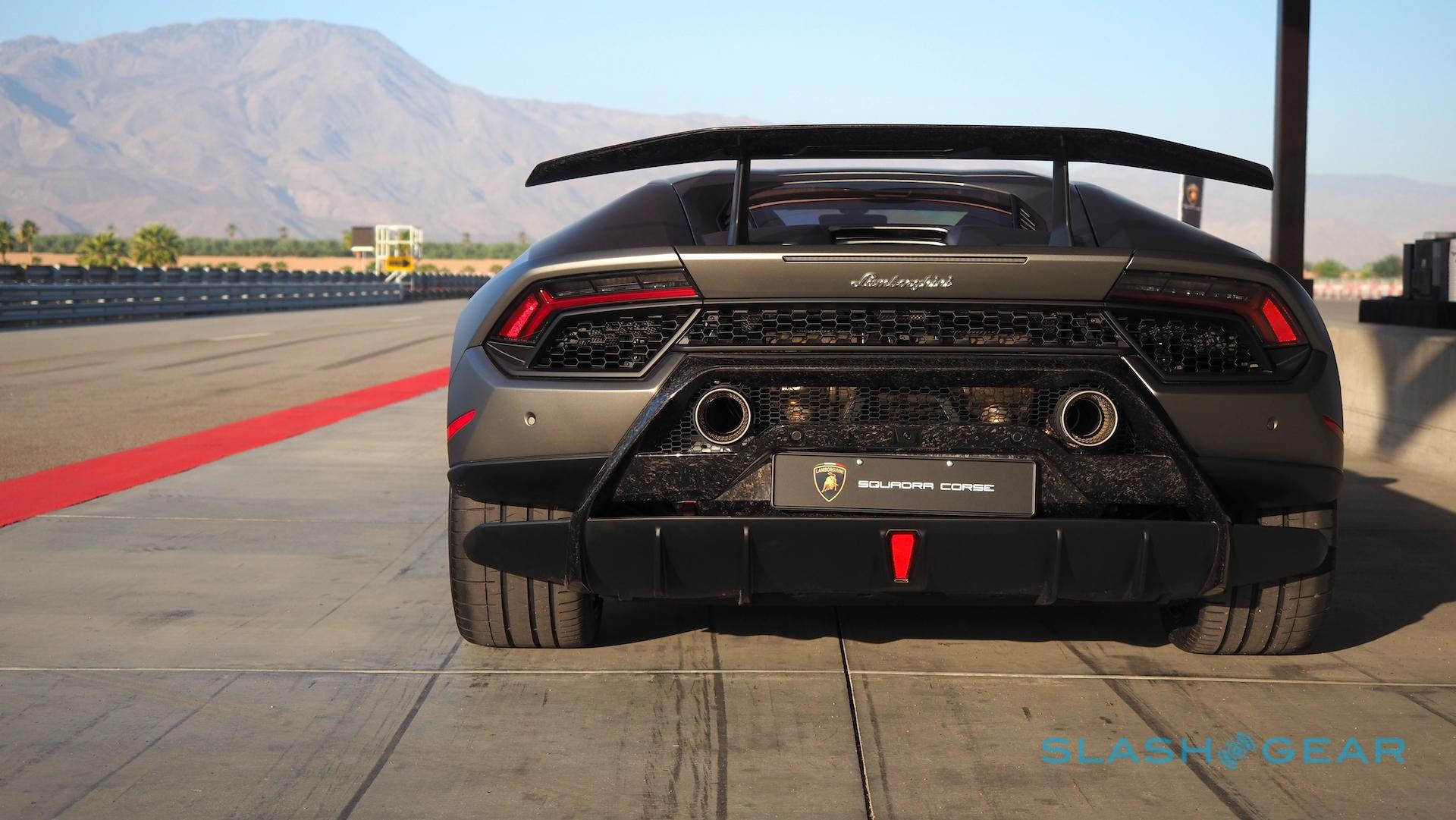 Since the Huracan Performante can control each of those vents independently, it can control whether the flow of air arrives out of the left or the right side of the wing. That pays dividends when you’re cornering, since the car can increase downforce over the inside wheel alone for better traction. Factor in the all-wheel steering, and you have improved cornering with less steering angle, and without a huge aero element fighting against the rush of air.

The result is a car that grips, and grips, and grips. Hurtling down a slalom I flicked the wheel and promptly wiped out a cone: the Performante had thoroughly beaten every expectation of turn-in ability I’d expected. On the track, there’s no sawing at the controls, just deft twists with your grip never shifting from 9 and 3. 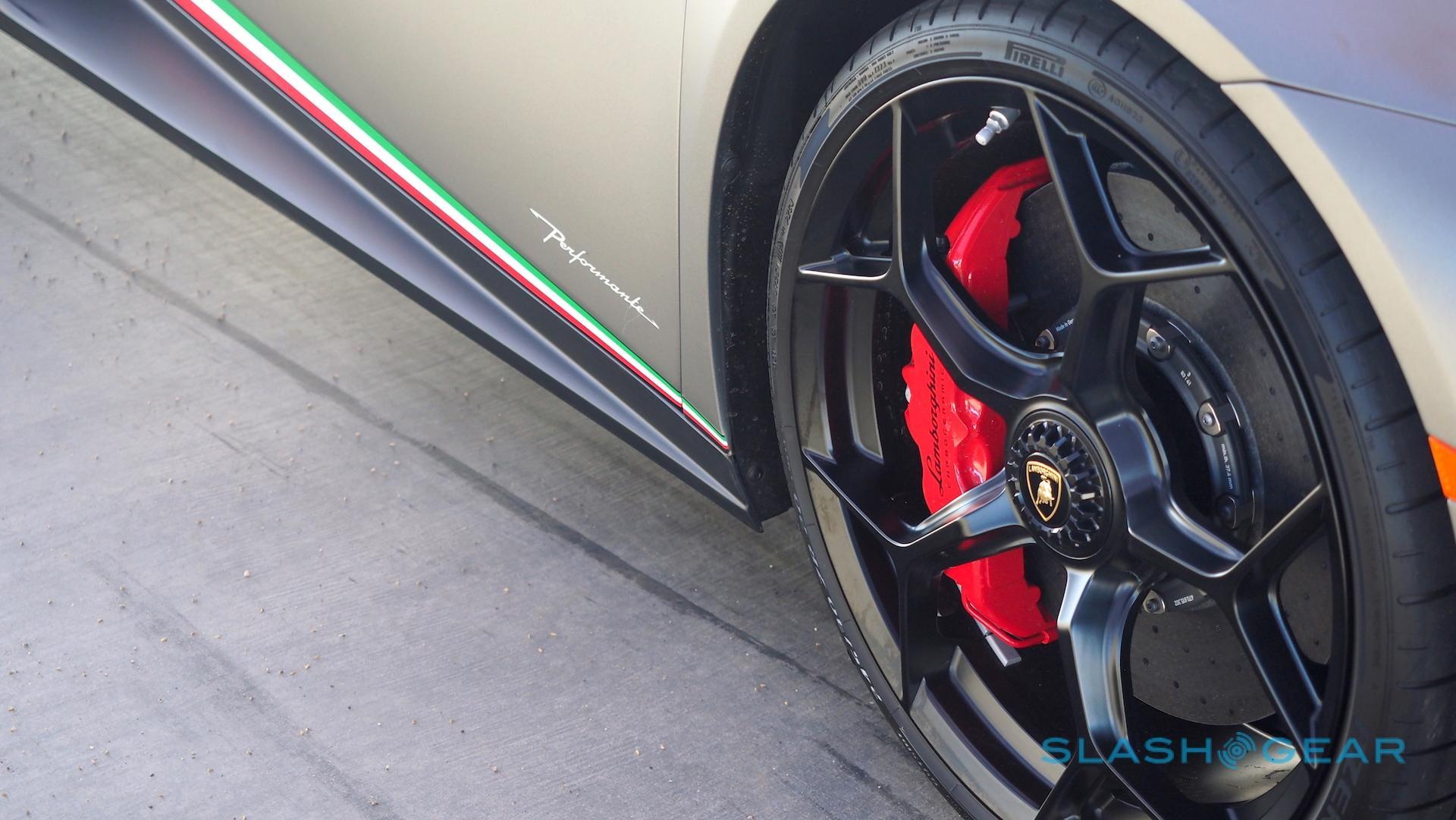 Lamborghini’s ANIMA drive mode system still has three modes, though their characters have been spread out more in the Huracan Performante than in the regular car. Strada is the default, the Italian coupe keeping its evocative soundtrack but sufficiently docile from behind the wheel to drive to the market and back (even if you’d not fit much in the deep, narrow front trunk). 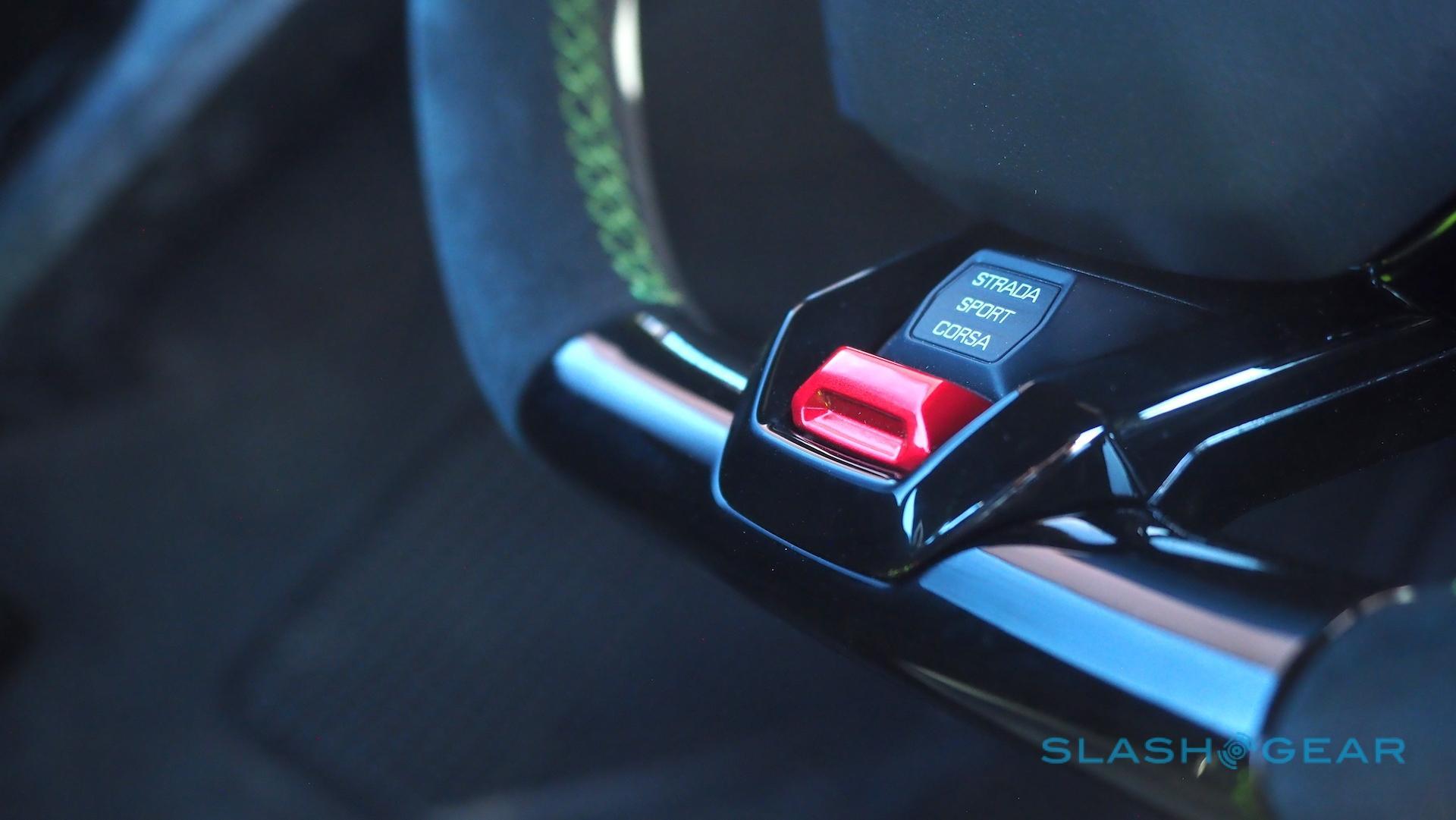 Sport dials up the eagerness, pushing most of the 631 HP to the rear wheels and making the Huracan more drift-friendly. Finally, there’s Corsa, which dials back the RWD-emphasis in favor of track stability and handling, while minimizing the electronic nannying. It also puts the 7-speed dual-clutch LDF transmission into full-manual mode, leaving gear changes solely to the driver and their paddles. There’s no auto-upshift when you hit the 8,500 rpm redline, either. 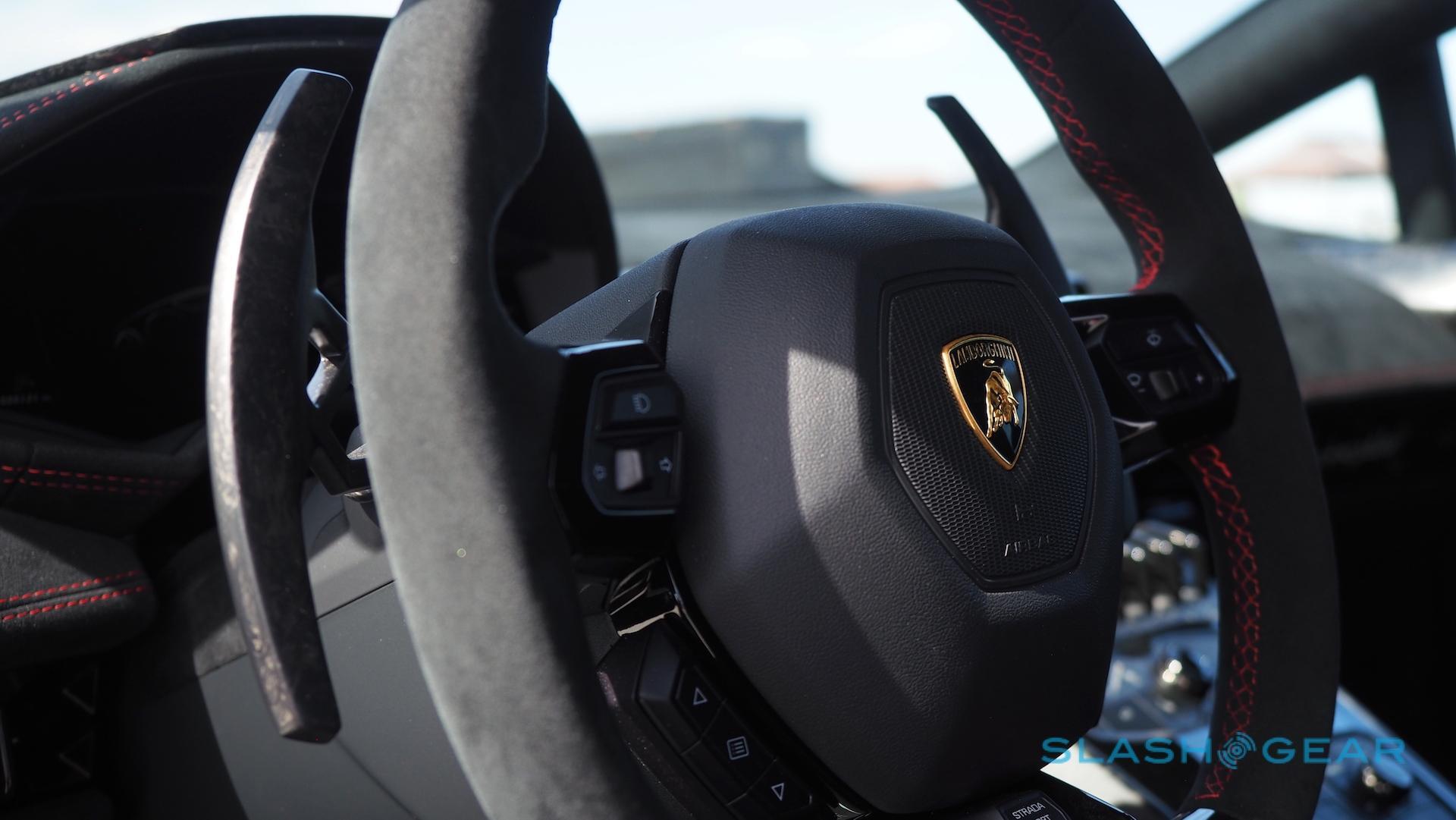 That redline may be high – one of the joys of a naturally-aspirated 5.7-liter V10 – but you reach it shockingly quickly. Time after embarrassing time in Corsa mode I found myself hitting the redline, losing vital seconds – vital, that is, were this a competition – before it registered that yes, it was time to upshift. Even so, the Huracan Performante is forgiving. 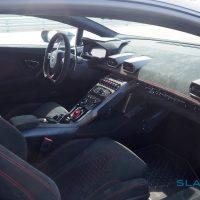 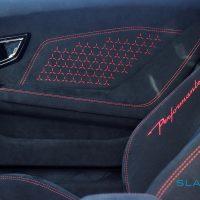 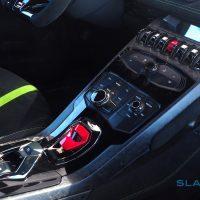 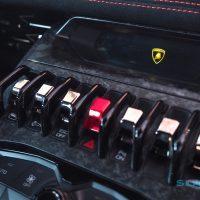 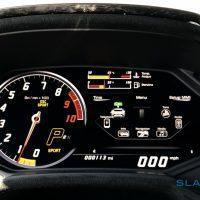 Here’s the thing. I’d expected the fiery embrace of death or, more likely and less melodramatic, the shameful and expensive embrace of bodywork repairs. Yet the Performante shrugged off my occasional ineptitude with Latin insouciance. When I screwed up my line into the corners, the all-wheel drive finessed me back into place. When I carried too much speed, the carbon ceramic brakes hauled me to sensible levels without wheel-spin, clouds of smoke, or a backend that wanted to overtake the front. All of the raw angst that I’d expected, the refusal to compromise to me, a dumb human who had been stupidly entrusted with the keys, failed to materialize. 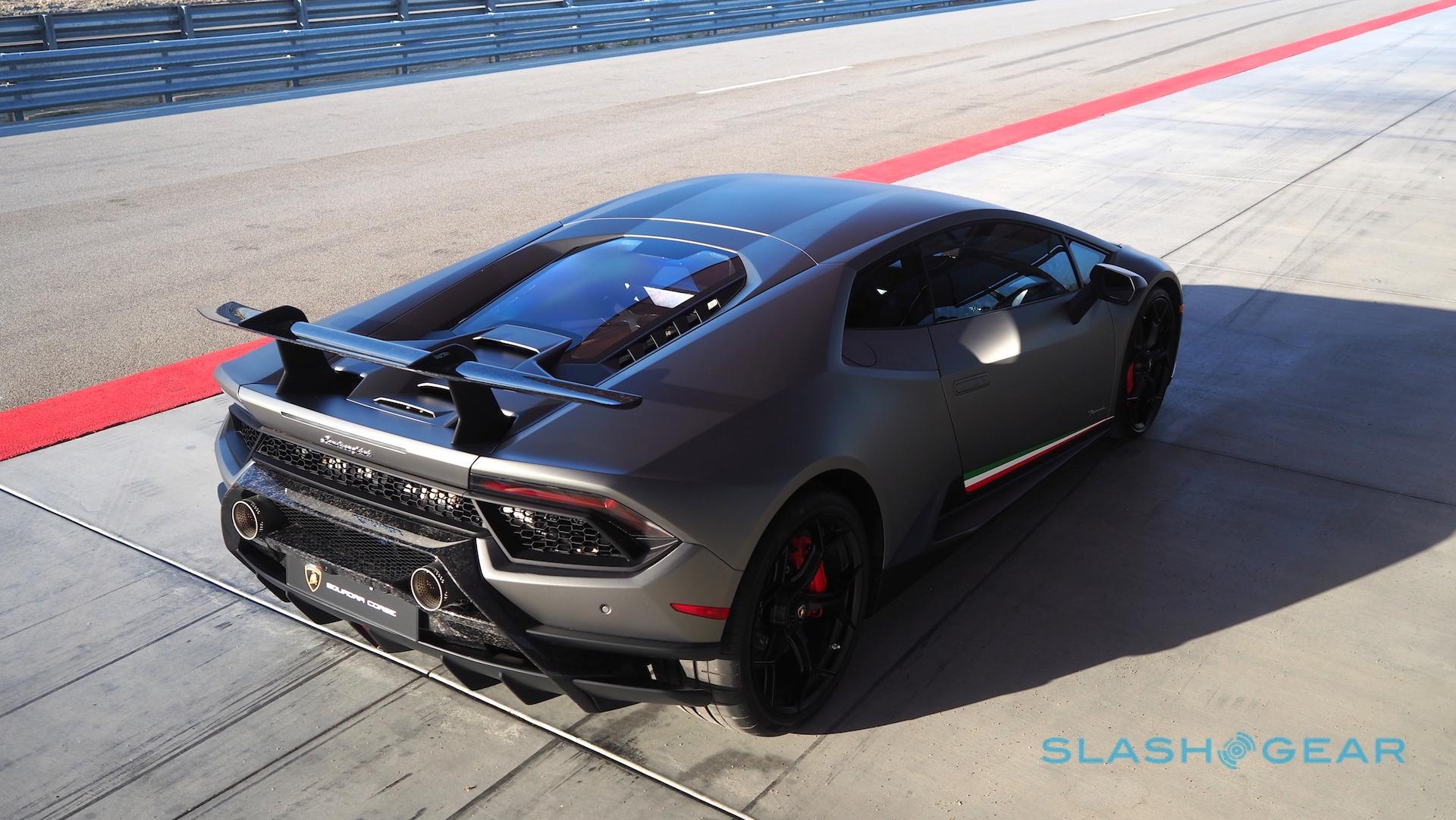 Could it be that Lamborghini’s engineers have made the Performante simply too good? The consensus is that the new, more extreme model easily out-performs the regular Huracan. It grips more, turns more sharply, does a better job at getting its power to the asphalt.

“At the limit,” one of Lamborghini’s pro-drivers explained to me as he threw me around the track on a hot lap, “it’s super-tuned to what you’re doing with your feet.” I don’t doubt it, but since I’m far, far from the level of a professional racing driver, I suspect I’d never get anywhere close. 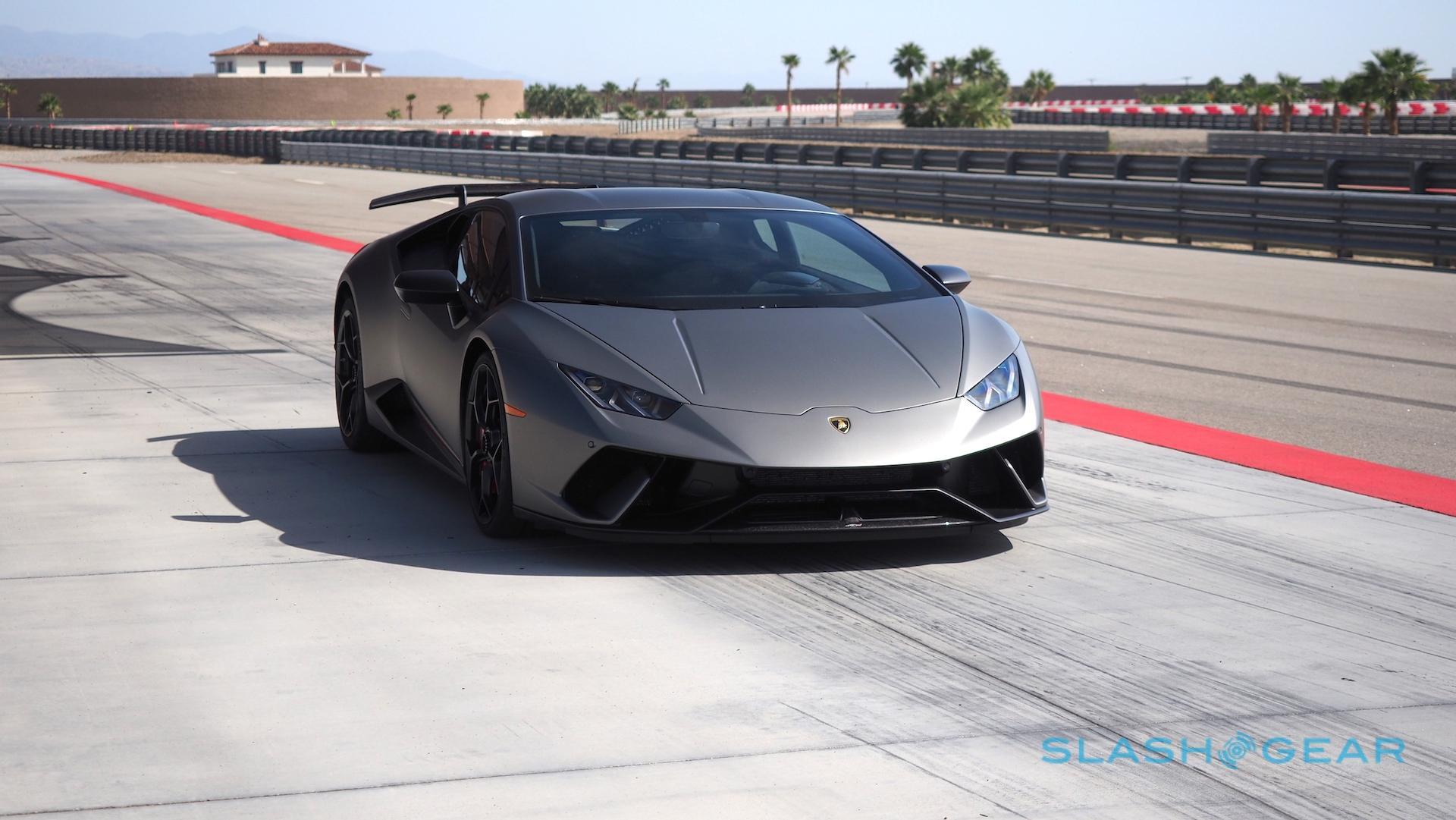 Don’t get me wrong, the Performante wants to go fast. Aches to, indeed: it’s where it sings, where it demonstrates every advantage of its impressive technology. Never, whether I was fumbling at the wheel or Lamborghini’s pro was in control, did I feel like it was about to break loose and ruin my day, dramatically and expensively. That might almost sound like a disappointment, if you’re primed by temperamental cars in the automaker’s history, but I strongly suspect it’s more welcome when you’re the one footing the bill.

Barring driver stupidity, I feel like there’s no way you could reach its limits on public roads, at anywhere in the ballpark of legal speeds. In a twist I never saw coming, the Huracan Performante is actually eminently approachable. It looks like a Lamborghini, it sounds like a Lamborghini, but I would not have expected the controlled fury I found behind the wheel.