Is it time for an even bigger iPad Pro?

The gap between the iPad Pro and the MacBook only gets smaller, and now I suspect it’s time for Apple’s tablet to get bigger. The arrival this week of the new 2020 iPad Pro, complete with LiDAR Scanner camera and fancy new Magic Keyboard cover, saw Apple take a huge step with the addition of mouse and trackpad support, and an on-screen cursor.

It’s something that the Cupertino company has long maintained is unnecessary, even as it quietly changed its mind on things like stylus support and external peripherals. Even so, the Apple Pencil and USB-C are one thing: the ability to use a good old-fashioned mouse with your iPad Pro feels like quite another.

Apple’s messaging cranked up a gear, too. The newest iPad Pro “is so fast it outpaces most PC laptops available today,” the company crowed. The new “A12Z Bionic is designed to be put to work, especially with pro apps.” Multitasking, split-screen view, and big-name software all add up to one core conclusion: it doesn’t really matter whether you consider the iPad Pro a “laptop” now, it’s aiming to eat the segment’s lunch regardless.

Suddenly, the iPad Pro feels much more than a tablet with accessories. The Magic Keyboard cover – with its QWERTY keys borrowed from the MacBook Pro, and a trackpad finally – is expensive, sure. Still, seeing the iPad Pro suspended in mid-air from the cover’s new, cantilevered hinge puts me in the mind of an iMac-style docking station, not just a case that happens to be handy for text entry.

From that perspective, maybe it’s time for Apple to go even bigger. Large tablets, like Samsung’s 18-inch Galaxy View, haven’t exactly set the world alight, but that’s arguably because they haven’t really done enough – bar being bigger – to distinguish them from cheaper, smaller Android slates. 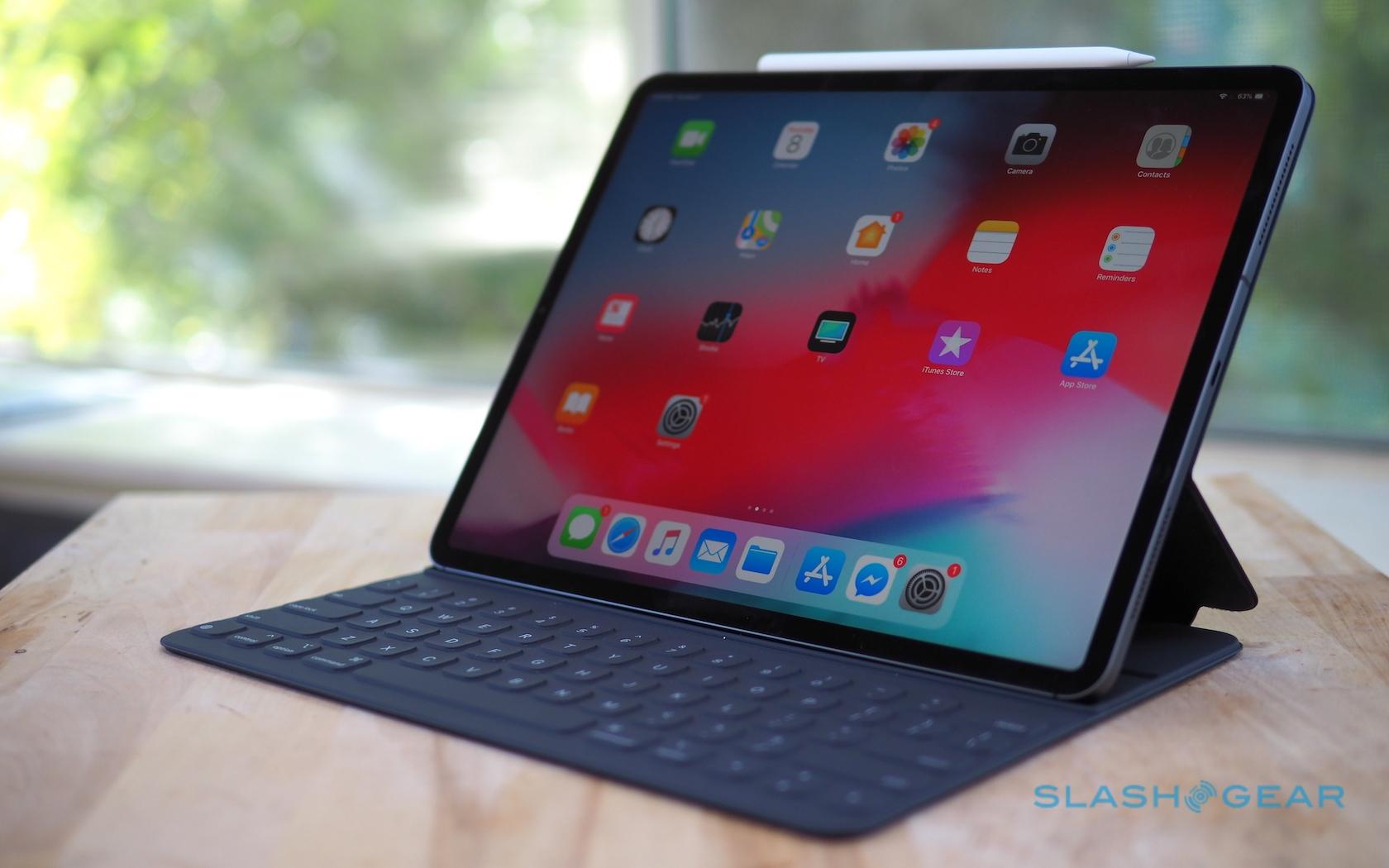 Part of me finds it’s odd I’m even considering the value in a bigger iPad Pro. After all, the 12.9-inch version of Apple’s tablet always seemed borderline too-big for my tastes. Seeing fellow travelers pull one out of their bag in airport lounges or on planes, then twist it up atop its comically truncated keyboard case, only reinforced my opinion that the 11-inch iPad Pro was the sensible decision.

Today, though, that doesn’t seem so clear-cut any more. I think it’s because, with the arrival of trackpad support and an on-screen cursor, the iPad Pro no longer falls squarely into the “tablet” category.

Instead I’m envisaging something more akin to what we’ve seen Wacom offer creatives over the years. Its Cintiq range of “pen displays” combine art tablet with high-resolution display, but have long been limited to a fairly small audience. No small part of that is the price – a 16-inch Cintiq Pro is $1,500 – not to mention the fact that they’ve also demanded a PC or Mac to actually drive them.

The iPad Pro, in contrast, is self-contained. I’m currently imagining a larger iPad Pro, docked in such a way that it could be pushed upright to use as an iMac replacement, or pulled down near-horizontally for art and video editing, and making a mental list of what software I’d really need for that to become a practical reality.

Therein lies the rub: it’s not just hardware, but software that’s required. If a larger iPad Pro is to succeed – if, indeed, the continued narrowing of the gap between iPadOS and macOS is to get smaller – then Apple needs to address the few glaring app omissions. Final Cut Pro seems like an obvious one, particularly now that Adobe appears to be all-in on bringing Photoshop for iPad up to feature parity with its traditional counterpart.

Creatives have always liked the idea of replacing a laptop with a tablet, they just need the full suite of apps – and the full range of functionality within those apps – in order to make that practical. 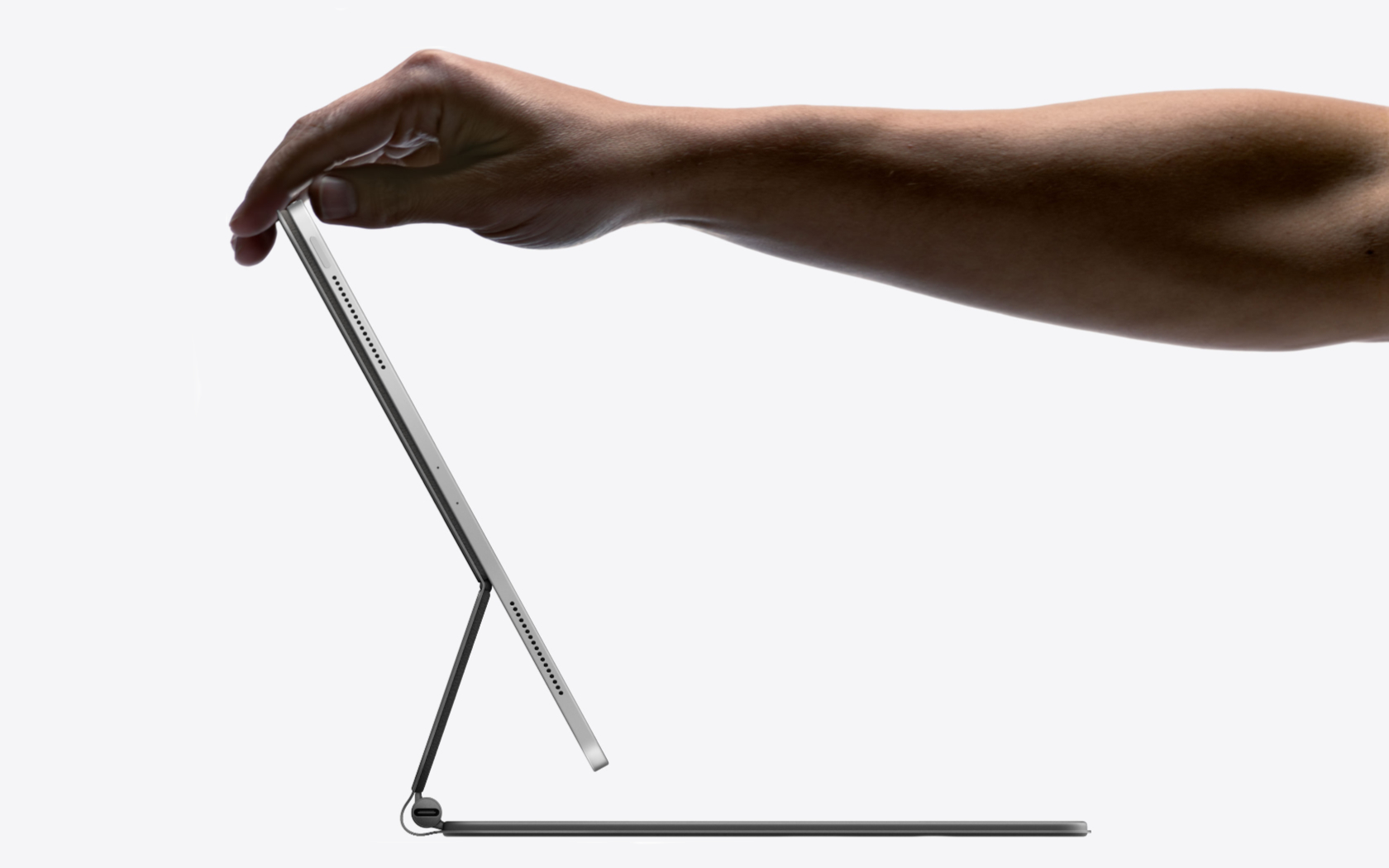 The irony is that, with its processors seemingly tailor-made by Apple to focus on content creation, the iPad Pro has always had more relevant horsepower for things like video and photo editing than similarly-priced notebooks. With a bigger screen, a desktop dock, and now keyboard and mouse/trackpad support, it would arguably no longer be an “alternative” to that notebook, but the obvious first choice. Meanwhile the barely-kept secret that Apple is exploring how a wholesale switch to ARM chips, and all that might mean for app ubiquity, could be enacted would only encourage developers to embrace new form-factors.

As is so often the case in flights of fancy like this one, in the end it comes back to imagining just how the Apple keynote might go down. A spotlight on a stage at Apple Park, focused on what, at first glance, looks like a streamlined iMac on its plinth. Tim Cook, grinning, slowly shifting the display down into place as a graphics tablet, then – with just one finger, naturally – gliding it back up again. And then – “it’s the most flexible iPad Pro ever” – reaching out to pluck it from its dock as applause thunders and wallets spring open.

Unthinkable? Maybe. But then we said that about a stylus for the iPad, and for Apple giving up on Lightning too. The iPad Pro is already a big deal; maybe it’s time for an even bigger one.