Well, you survived. At least, we hope you did, with some semblance of your sanity left over. If you were one of the many, many people out there to stand waiting in a line to get your hands on the latest and greatest gadget from the ridiculously smart minds at Cupertino, then hopefully you’re busy enjoying it as we write this. What is this, you might ask? Well, as you could probably glean from the title, it’s a wrap-up of all the craziness that was today. And yes, it was crazy.

To be fair, but not too ridiculous here, we’re going to actually start at the end of yesterday, June 23rd. Why? Because we’ve got to point out that when Apple announced the iPhone 4, there were two variations: white and black. And, while the black obviously still holds the major details of the iPhone 4, the white one attracted plenty of attention in of itself. Unfortunately for everyone who wants one, we already know that the white one wasn’t available at launch. But, what made it worse, was the announcement that Apple wouldn’t have any white iPhone 4s available until the second half of July. And, they’re apparently sticking to that.

It didn’t help on that particular day that, throughout the majority of it, people were reporting all sorts of doom and gloom stories regarding their brand new toys (which, coincidentally enough, they got early). Ranging from Retina Displays having spots or lines of yellow, to reception being next to abysmal (sometimes), the complaints were coming quickly from all sorts of different directions. And then, iFixYourI decided to destroy their own iPhone 4, which they got from a very nice gentleman, and found out that if you drop your iPhone 4, you’ll probably want insurance. 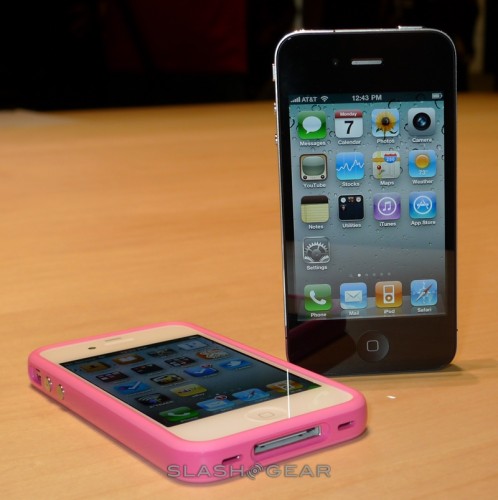 And now, the big day! Today, June 24th, is the official day the iPhone 4 goes on sale! And sure enough, you could find some kind of line at almost every Apple Store across the country. (Indeed, around the world.) And while people waited in lines, talking amongst themselves, the rest of the world watched in one capacity or another. From news stations, to blogs, to newspapers, the hustle and bustle that is the iPhone launch day waiting line was definitely easy to find today.

And, who was the first to sell-out? It wasn’t anywhere hear in the United States, surprisingly enough. (Then again, maybe it’s not all that surprising, considering across the pond they had a few hours of a head start.) But, carrier wise, the first place to sell out of iPhone 4s was Vodafone. There’s plenty of other stores around the world that followed suit, of course, and we’re sure that they’ll have to wait just as as many weeks as Vodafone is: at least a few, before they’ll be able to refresh their stock. So, if you’re in their neck of the woods, hopefully you already got your hands on one. 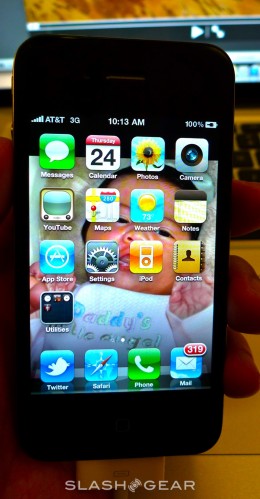 Now, remember those poor reception complaints we mentioned above? Well, sure enough, they picked up all day today. So much so, in fact, that we chronicled it within another post. And, while there was plenty of speculation, the main two arguments were the antenna (the external one, that frames the iPhone 4), or the software. While we showed you one video that showcased the software end of things, we’ve got it on good authority (from Apple), that it is indeed the external antenna and you do have to not hold it in such a way that you’d block that antenna with any kind of moisture on your hand. It’s a real thing, and as we’ve seen from the comments in that section, we’re not exactly sure the customer base is all that pleased with that result.

So, what about the screen discoloration? Apparently that’s adhesive glue that got used during the manufacturing stages of the iPhone 4’s development life cycle. The glue hasn’t dried yet in a few places, on a few phones, and therefore the Retina Display has changed its hue in a small spot in some locations on the screen. The good news? Since it’s adhesive glue, apparently it’s going to fix itself over time. Though, we don’t know many people that would sit and stare at their new toy with a yellow spot on it, hoping beyond hope that it disappears. But, if you’re going to take Apple’s word on it, sit tight.

And then, ultimately, it all comes down to the unboxing, doesn’t it? We’ve obviously got a couple of iPhone 4s running ’round these parts, so we wanted to do the traditional unboxing for you, and show you all the goodness that is the iPhone 4. You won’t find much in the box, obviously, as Apple doesn’t mess around when it comes to wasting things in boxes. You will find the USB cable, and, of course, the iPhone. But, you probably don’t need us to talk about it right here, so just go ahead and watch the video below for all the goodness.

And finally, there’s something you need to check out. It’s been a pet project of ours for a little while now, and we’re happy to finally unveil it right here, right now. And, it’s fitting, considering the day, the events, and the product that’s launching. If you click right here, you’ll be taken to our new page, which we’ve lovingly entitled Roots. It’s where you’ll find all the essential information on the iPhone 4. This includes our reviews, unboxings, and any other piece of news relating to the new iPhone from Apple. Oh, and the best part? You can review the product yourself! That’s right, just follow the page, put your own spin on a review, and hit the submit button, and sure enough you’ll find your own voice right here on SlashGear. So, go check out http://roots.slashgear.com/iphone-4.