There should be no doubt at this point that Apple is preparing to release a reboot for the iPad in the very near future, not least of all because of a set of up-close assembly photos appearing today. This set of photos from Macfixit Australia shows the front glass as well as digitizer assembly of the next-generation iPad, appearing to confirm the idea that this generation, Apple will be kicking out a reaction to the success of the iPad mini.

This new iPad has been suggested – more than a few times – to be working with a slimmer body and design cues straight out of the iPad mini construction manual. You’ll see here that the iPad’s 5th generation will once again stick with a similarly-sized set of bezels, but will be curving its corners in to match the look and feel of the iPad mini. You’ll also notice – though it wont likely affect the final user experience all that much – that there are now 2 connector cords coming out the side of this panel rather than just one.

We saw a similar vision on the 5th of August with another iPad 5 front panel that looked to have the same features as the one we’re seeing today.

In the past the iPad worked with an FFC cable – that’s a Flat Flexible Cable, and one that’s been working in each iPad thus far save the original. The new connectors (two instead of one) are FPC, that is: Flexible Printed Circuits. Connectors of this same sort exist on the iPhone 4/4S as well as the iPhone 5.

The size of the display is said by the photographer of these images to be exactly the same as the current-generation iPad. This makes a lot of sense since the iPad’s display size hasn’t changed significantly since its original release. The release of the iPad mini (as a completely separate device in and of itself) struck a chord with Apple and its consumers, as this full-sized iPad’s style, again, replicates the smaller unit’s industrial design. 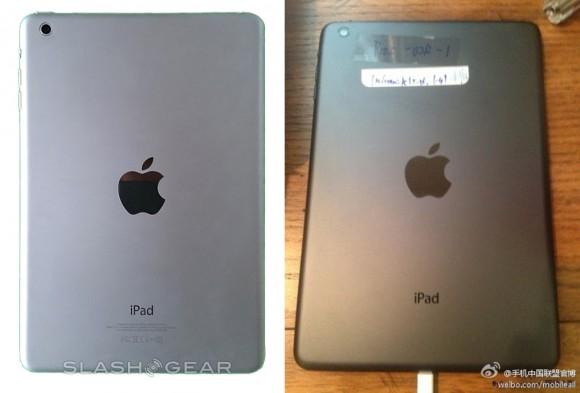 The appearance of this panel now follows through with suggestions earlier this year that iPad 5 and iPad mini 2 production would be taking place this month. Above you’ll see an image of the original iPad mini sitting aside another leaked image of the iPad 5, this suggesting once again that the iPad 5 will take on the appearance of the smaller slate.