I expected Apple to jump on Leap Motion first, not ASUS

If you can judge a technology’s wow-factor by how much it’s accused of being vaporware, Leap Motion‘s gesture-tracking was a hit from the off; companies jumped on the idea, though it’s perhaps a surprise that the first should be ASUS, not Apple. The matchbox-sized gadget – which can track the movement of ten fingers individually, and 200x more accurately than kit like Microsoft’s Kinect – will soon be integrated into Windows 8 PCs from ASUS, according to a new deal announced today. Microsoft’s OS certainly loves fingers, but Apple’s moves to blend the best of OS X and iOS arguably make it and Leap Motion more obvious bedfellows.

If you missed it first time around, Leap Motion’s eponymous gizmo is a tiny, $70 box that hooks up via USB and creates a four cubic foot area above itself within which individual finger movements can be tracked. That’s at an accuracy of within 1/100th of a millimeter, and the system can differentiate between fingers and, say, a stylus being held for mid-air handwriting, as well as recognize when finger movements are intended to be linked, such as for pinch-zooming.

So why would Apple be interested in Leap Motion’s tracking technology? It’s all down to the Cupertino firm’s dual stance on touchscreens. On the iPhone and iPad, Apple hasn’t been slow to adopt touch, driving the adoption of capacitive technology, but its Mac desktop and notebook ranges have stubbornly avoided finger-friendly displays.

Apple’s argument has always been that the ergonomics of touch simply aren’t suited to a notebook or desktop form-factor. Reaching out across to a display – whether to your MacBook screen or to stab at an all-in-one – isn’t comfortable, so their argument goes, when compared with a large trackpad such as the company’s own Magic Trackpad. 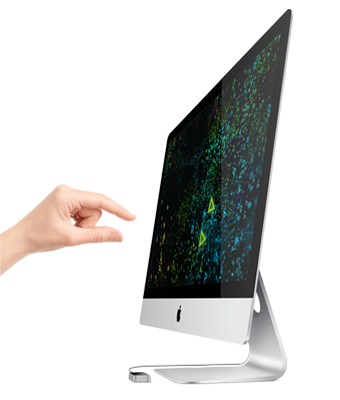 It’s a strategy entirely at odds with where Microsoft has pushed Windows 8, with the new Metro-style interface of the latest OS expressly designed for touchscreen computing. ASUS’ deal with Leap Motion, however, means its future laptops and all-in-ones will also support gestural interaction, waving and grabbing at the air in front of the display so as to manipulate what’s on-screen.

That’s actually an area of research that Apple isn’t unfamiliar with: the company has previously filed patents for Kinect-like navigation, including around a 3D display, or by using infrared light bouncing off your hands above a keyboard. None of that research has actually ended up in shipping hardware, however.

OS X has borrowed an increasing number of features and usage concepts from iOS in its latest iterations; that’s only expected to increase with the launch of OS X 10.9 later this year. With iOS so finger-focused, however, the limitations of a trackpad or Magic Mouse will continue to keep the reach-out-and-tweak-it immediacy iPhone and iPad users are familiar with from the desktop experience. Leap Motion’s approach would’ve fit that paradigm perfectly, though I’d be surprised if Apple wasn’t cooking up its own approach as the gap between mobile and traditional computing narrows.