We had high expectations for HTC’s first dual-core smartphone, and the company delivered with the HTC Sensation. A mixture of evolution and revolution, the family resemblance is clear: a 4.3-inch display like the Desire HD, only now running at qHD 960 x 540 resolution; a Snapdragon processor like the Desire S, only now Qualcomm’s new 1.2GHz dual-core MSM8260 processor; and HTC Sense, only v3.0 with a new intelligent lock-screen and HTC Watch for video rentals and downloads. All in all, the HTC Sensation is shaping up to be one of the smartphones to beat in 2011; check out our full unboxing and first-impressions after the cut.

In the box there’s the usual sparse selection of accessories: a USB AC adapter, USB to microUSB cable and a wired stereo headset with in-line controls. We’d like to have seen the MHL-to-HDMI adapter bundled too, like AT&T sensibly did with the Infuse 4G, but that’s still an optional accessory; you do get DLNA streaming support over WiFi b/g/n, though. HTC will offer a charging dock – you can set the Sensation to automatically boot into Dock Mode, with weather and Facebook updates shown, and even optionally turn on the Mobile Hotspot functionality – though right now it’s not on sale.

Construction is solid, with a sheet of toughened glass up front that rises to a slight lip at the edges of the screen. That serves double purpose: keeping the display raised slightly off the table when placed face-down, and also giving some tactile feedback as to when your thumb is swiping toward the very edge. Responsiveness is good, and the whole thing is creak-free. Unlike the somewhat fiddly slide-off doors of recent HTC devices – the Flyer was a particular chore to open up – the Sensation pulls out of its rear chassis entirely, revealing the microSD slot and SIM slot. 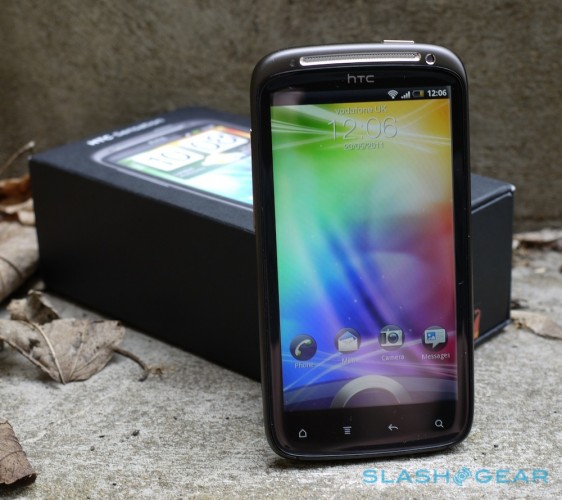 Android and Sense moves swiftly on the dual-core chip; the jerkiness we spotted when pulling shortcut buttons down to the launcher ring on the Flyer’s lock screen is non-existent on the Sensation. The 3D animations on the homescreen are smooth and menus open without delay. Similarly, the browser renders even heavy pages quickly, and thanks to the qHD resolution you can read, say, SlashGear homepage articles without having to zoom in from the full page width view. Just to whet your appetite, we ran benchmarking tool Quadrant Advanced and the Sensation scored 2245 overall, with 5918 in the CPU category.

We’ll be putting the HTC Sensation through its paces over the next few days in time for the full SlashGear review, but for now let’s just say this: the Samsung Galaxy S II has got some serious competition.