The HTC Sensation is official, and it’s a beast of a smartphone. Freshly announced at HTC’s London event today, the Sensation slots in at the top of the company’s range complete with a high-resolution qHD display and speedy 1.2GHz dual-core processor. Check out our hands-on report after the cut.

There’s a lot to like about the HTC Sensation. While it has the same screen size as the HTC Desire HD, it’s narrower and thinner and, thanks to more distinctly curved edges, feels far more slender in the hand. The bright, clear S-LCD screen also packs in more pixels: 540 x 960 rather than the by-now traditional 480 x 800 of WVGA. It adds up to crisper graphics and smoother text, and makes a significant difference to webpages in full-screen view. HTC has given the edges of the Gorilla Glass display a slight concave finish, serving double-duty to keep the screen off the table if placed face-down, as well as to form a physical lip for your finger to slide up against while scrolling.

The Sensation is one of HTC’s first handsets with a dual-core processor – the HTC EVO 3D has the same 1.2GHz Qualcomm MSM 8260 chipset – and the speed shows in page transitions and how the smartphone handles the increasingly graphically-heavy Sense interface. There are now 3D effects between homescreen pane transitions (spin the homescreen fast enough and the perspective pulls back to show the full carousel in action) with a sprinkling of extra detail for the eagle-eyed: as you rotate the pane with HTC’s familiar oversized clock widget, for instance, you can see the round end of the clock barrel mechanism. Pointless, perhaps, from a functionality standpoint, but evidence of HTC’s joined up thinking with Sense.

The unibody design skirts the line between solid heft and lightweight convenience, and is creak free; that’s helped by the fact that the back panel and edges are one solid piece, into which the screen section slots. The microSD card slot (though not the SIM slot) can be accessed without removing the battery. Ports and controls are limited to power/lock on the top, next to a 3.5mm headphone socket, and a volume rocker and microUSB port with MHL HDMI support on the side; there’s no dedicated camera shortcut key.

HTC doesn’t plan on bundling the MHL HDMI dongle in the box with the Sensation, at least initially; like with the iPad 2’s media adapter, it will be sold separately. In fact, there should be two dongles on offer, one drawing power from the Sensation itself, and another with a separate USB input for externally powering (and recharging the phone) the whole setup. The Sensation will support full screen mirroring, not just video output via HDMI, so everything on-screen will be replicated on your HDTV or projector; it’s capable of 1080p Full HD output. 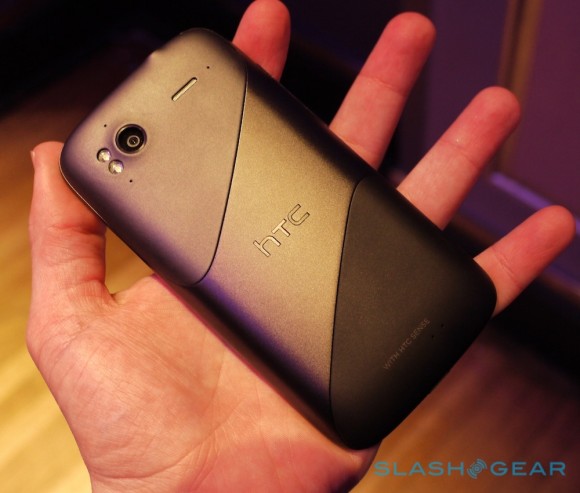 What users will most likely be pumping out via HDMI is content rented or purchased from HTC Watch, the company’s new media store. Initially offering movies and TV shows – with the possibility of music videos in future, HTC tells us – pricing is yet to be finalized but from what we saw on demo devices the UK pricing looks to be around £0.99 for rentals and £1.99 for purchases. HTC is aiming to preload several trailers and perhaps even a full movie on the Sensation out of the box.

Although the app works well – there are various My Library views including a basic list, separate TV and movies, and full details of content (including user-submitted reviews and the ability to share links to titles through the usual array of Android sharing options) – there are still limitations, primarily around DRM. Up to five HTC devices can be registered to a single account at any one time (you can add/remove one device within a 30 day period) so you could watch purchased movies on, say, your Sensation and your Flyer tablet; however, you can’t transfer the purchases/rentals over to your PC or Mac. There’s also no automatic content sync or bookmarking between devices; if you want a movie on each device you have to trigger a download each time, and there’s no facility to start watching on, say, the Flyer and then pick up where you left off on the Sensation. HTC tells us that’s something they’re working on for the next release of the HTC Watch app.

What won’t be present, unlike on the Flyer, is the OnLive streaming gaming app. In Europe that’s primarily because HTC is yet to finalize the relevant licensing deals, though the Sensation should be capable of running the system on a hardware basis, at least. The company does plan to introduce OnLive to phones, though it will be limited to the top tier of devices (both for brand positioning purposes and because of the minimum hardware specifications demanded).

There’s also no sign of the custom HTC video chat app demonstrated at MWC 2011, which the company tells us is because it still hasn’t managed to gain carrier approval as yet. Carriers are wary of the data load, it seems, though the Sensation’s front-facing camera can still be used with Skype and other video calling apps available in the Android Market. Right now, though, there’s no timescale for the HTC app’s release.

The new Sense works well and, despite the animations and glossy finish, moves slickly on the dual-core CPU. There are various tweaks all through the system; HTC’s Mail app, for instance, now offers optional previews of body text – a choice of 2,3 or 5 lines, along with the sender and the subject line – and the video app now supports clip trimming. Connect to a WiFi network which requires in-browser validation (such as hotel or café landing pages, which demand you click an agreement button before you can get online) and the Sensation will warn you about it. You still get access to the HTC Hub and download store, together with HTC’s own mapping system (with support for offline navigation), and the Mirror app – to use the front-facing camera so as to turn the Sensation into a very expensive pocket mirror – is present just as on the Desire S.

Despite the higher-resolution display, apps scale well. We installed the SlashGear Android app and it worked with no problems on the qHD panel. The online suite of HTCSense.com services will also work as usual. Still, it’s a shame HTC didn’t increase the number of homescreen widget slots available: the traditional 4 x 4 grid seems unnecessarily sparse on a screen of this size and pixel-density.

Nonetheless, it’s hard to escape how polished and complete the HTC Sensation is, and how well it slots into the flagship spot in HTC’s line-up. Fast, handsome and ticking all the key boxes on the spec-sheet, it’s a hugely appealing phone with the potential to take on Samsung’s Galaxy S II and Motorola’s ATRIX 4G. We’ll save final judgement for the full review, but even now it’s clear to see that HTC stands a good chance of retaking the top spot in Android smartphones.