Offline navigation may be coming to Google Maps but Nokia’s HERE app has long supported it, and is today revamping its offline maps with even more data. One of the biggest improvements is to HERE‘s mapping of Africa, with navigation and offline support added to seven countries including Cameroon and Equatorial Guinea, not to mention far more road detail. Meanwhile, public transit line accuracy has also been tweaked to making it more illustrative of how you’ll actually travel.

Cameroon, Central African Republic, Chad, Republic of Congo, Equatorial Guinea, Gabon and the island nation of São Tomé and Príncipe are all gaining navigation support in this update. Meanwhile, Cape Verde, Democratic Republic of Congo, Ethiopia, Guinea-Bissau, and the Seychelles all have improved mapping data.

As for public transit, whereas before HERE was simply linking stations together with straight lines – albeit color-coded ones depending on each city’s system – now the maps show the actual routes involved. It’s something HERE tried with its updated Chicago mapping last year, and now it’s rolling out more broadly across locations in America, Europe, Australia, and New Zealand. 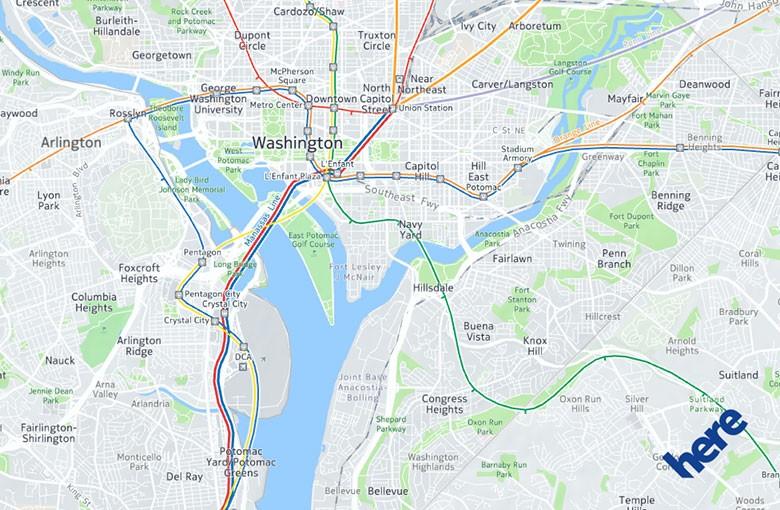 The new lines follow more accurately the route the transit – whether train, subway, or tram – will actually take.

HERE also says that its new maps should be swifter to update in future. Enterprise subscribers get even more embedded data that can be shown in optional layers, such as road weight limits and height restrictions that trucking companies require.

These richer maps – on the way to what HERE refers to as HD Maps – are in no small part what has made the company an acquisition target for firms focusing on mobility and autonomous vehicle research. The most recently-announced real-world trial will be in Virginia, which is opening up more than 70 miles of its roadways to self-driving cars, and using HERE data to ensure they’re safely mapped.

Meanwhile, companies like Uber, Mercedes-Benz, and others are all believed to be weighing bids for HERE.

The updates to offline maps should be flagged up in the iOS, Android, and Windows Phone apps soon.