Donald Trump was concerned this week that Google suppresses conservative news media in search results. He did so in two Tweets, one of which asked whether this practice was legal. Inside the United States, the FCC effectively ended Net Neutrality in December of 2017. Net Neutrality is not the same as Search Neutrality, and neither the FCC nor the FTC (nor any other government entity) has the legal power to tell Google that it needs to show “fair and balanced” search results – at least where politics are concerned.

Trump’s Tweets asked about laws and suggested certain things were illegal. Instead of consulting with officials and the unending supply of highly-qualified professionals he absolutely undoubtedly has access to, Trump’s ego told him to Tweet. Have a peek at the Tweets in the gallery below. I put them in a gallery so you don’t have to look at them if you don’t feel the need. 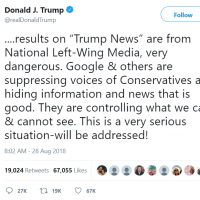 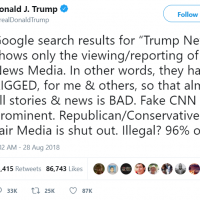 You don’t really need to look at what Trump said to find value in the data I’m about to share. This is all about the law, and law enforcement. And a little bit about Free Speech, which does not mean what apparently MOST people think. The First Amendment to the U.S. Constitution reads as follows:

“Congress shall make no law respecting an establishment of religion, or prohibiting the free exercise thereof; or abridging the freedom of speech, or of the press; or the right of the people peaceably to assemble, and to petition the Government for a redress of grievances.” – Text from The First Amendment to the U.S. Constitution

Didn’t Google get hit with some antitrust fines recently?

The FTC has a similar power in the United States. In January of 2013, the FTC closed an investigation of Google for “search bias” – specifically about competitive organization of search results in favor of the company itself. Google was not found guilty of promoting its own products and services over others in its own search results – you can read the FTC statement on the matter from January 3rd, 2013 if you do so wish – but the important part here is the Consumer element.

The Law (has little power here)

It is an opinion, not a law, that Google should remain an utterly unbiased provider of search results. There is no law which restricts Google from favoring CNN over Fox News. Similarly, there is no legal reason why Google can’t block all search results that use the word “Trump” in any way, shape, or form.

In the year 1949, a policy was enacted by the FCC that placed requirements on holders of broadcast licenses – news sources, for the most part. The fairness doctrine required that important public issues be presented by broadcasters and that broadcasters should present these issues in a fair manner. Below you’ll find a clipping from the 1949 Fiscal Year-end FCC Fifteenth Annual Report with mention of radio editorializing which lead directly to the FCC Fairness Doctrine for broadcast license. 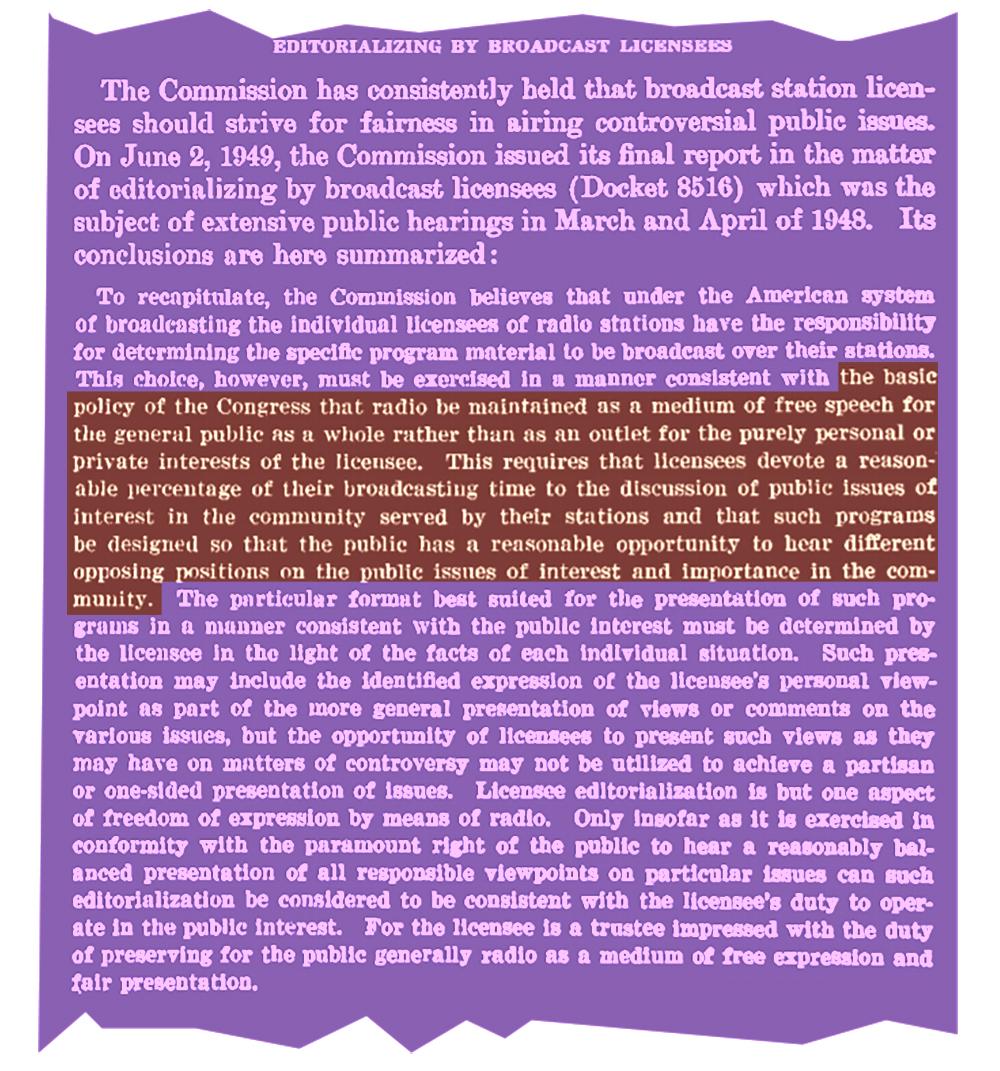 In this report, they mention that because radio waves were owned by the government, “the individual licensees of radio stations have the responsibility for determining the specific program material to be broadcast over their stations.” Free speech, right? Citizens have the right to speak out against their government without fear of reprisal as such.

The document goes on: “This choice, however, must be exercised in a manner consistent with the basic policy of the Congress that radio be maintained as a medium of free speech for the general public as a whole rather than as an outlet for the purely personal or private interests of the licensee. This requires that the licensees devote a reasonable percentage of their broadcasting time to the discussion of public issues of interest in the community served by their stations and that such programs be designed so that the public has a reasonable opportunity to hear different oppositing positions on the public issues of interest and importance in the community.”

This was in effect the Fairness Doctrine as it applied to news sources on the radio and eventually on television, just the same. The FCC didn’t enforce the doctrine a whole lot – but the doctrine did come into play a few times.

One example is the revocation of TV station WLBT’s license for the complete white-washing of local and national news, including zero African American newscasters or employees in a listening area that was 42-percent African American. According to Dr Everett Parker, speaking on Democracy Now back in 2008, the station had never featured a black person “unless they were arrested.”

The situation came to a head when a black minister requested to be sold broadcast time from the station. When the White House got wind that the minister (Minister Robert L.T. Smith) wanted to purchase time in order to broadcast his intent to run for congress, they told the station that they’d appreciate it if the station would sell the minister some time. The station abided, but the station manager took Minister Smith for a walk by the station’s nearby water source. He apparently said the following: “I’m going to be so sorry when I see your body floating down the river tomorrow.”

Everett Parker, head of the Office of Communication of the United Church of Christ, filed a complaint with the FCC, aiming to get the WLBT’s public broadcast license revoked. The FCC did not agree at first with the complaint, but – years and court battles later – Chief Justice of the United States, Judge Burger, filed a decision on the day he was sworn in as Chief Justice. That decision revoked the FCC public broadcast license from WLBT.

FUN FACT: Companies like Twitter follow a fairness doctrine of their own, not because it’s the law, but because it’s good for business. For example, remember that time Twitter made clear they won’t delete newsworthy Trump tweets. Technically they could delete Trump’s entire account – it’s not against the law that they keep Trump’s account as-is. It is, however, in their best interests to keep Trump’s account untouched and active for all eternity.

In August of 1987, the FCC abolished the Fairness Doctrine in a unanimous vote. As such, news broadcasts of all sorts have no official requirements put upon them by the United States government. But it’s not like it’d matter anyway, now that the FCC no longer holds sway over the Internet.

The FCC removed themselves from enforcement of citizen and consumer protections with regard to the Internet in December of 2017. In an initiative called “Restoring Internet Freedom,” the FCC moved any responsibility it had in rules enforcement on the Internet to the FTC. Again, the FTC protects consumer interests, and only matters having to do with consumer fairness, etc.

Also with “Restoring Internet Freedom), the FCC removed rules enforcing Net Neutrality. As such, no requirement exists for internet providers to give equal access to websites to any individual user, or group of users. As such, not only does Google not have to follow any sort of “fairness” rules in search, a company like Comcast or Verizon has every right to block any websites they want from any user – or, for example, the entire population of the United States.

Because it’s not a law:
• Google can legally block all “positive” news about Trump from its search results. Google could legally block all “negative” news about Trump if it wanted, too. Google could straight up block Trump from the Google Search engine entirely if it wanted to – and it could do so entirely legally under current U.S. law.
• Twitter can legally delete Trump’s entire account – or edit his Tweets – or change his profile pic to a silly goose snake.
• Internet data providers can legally block any webpage or all web access from any or all users across the United States.

I’m not saying Google is blocking anything, really. It makes very little sense, for business or ethically, for Google to block Trump-positive news, or conservative news sources in general. Twitter probably won’t turn Trump into a goose snake or delete his account any time soon. Internet providers probably won’t do a lot of webpage blocking for the time being – not until people stop caring about Net Neutrality entirely.

Dear Donald Trump: Google can organize its search results however it likes under United States law – that includes potentially blocking links and sources it does not want to list. Especially since we’re talking about the Google Search Engine, which does not fall under any sort of government organizational umbrella for search results that don’t directly compete with Google’s business. Google Search also has no accountability to the First Amendment. If Google was run by the U.S. Government, it’d be a different situation entirely. 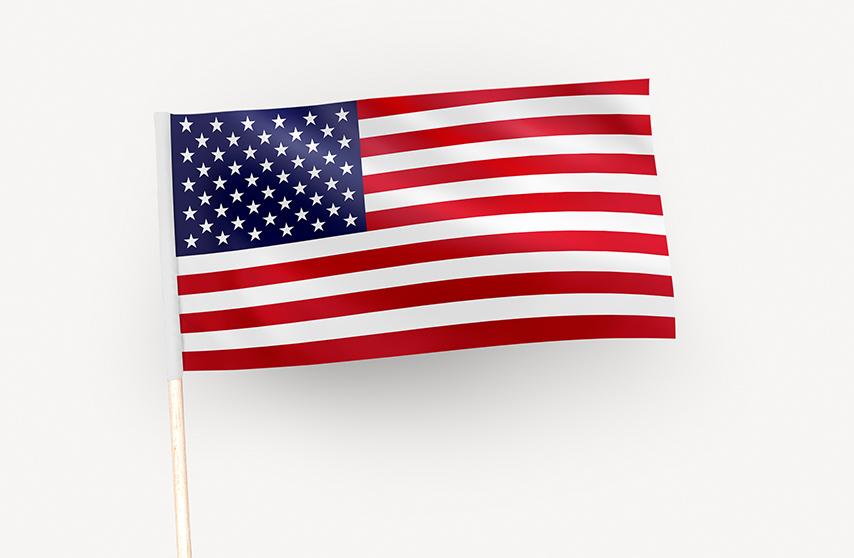 Further, because of the FCC’s “Restoring Internet Freedom” ruling passed in December of 2017, internet data providers have no obligation to provide anyone equal access to news about Trump. That goes for positive and negative news about Trump, just the same.