Google I/O and the year of the Context Ecosystem

We went into Google I/O hoping for hardware and gadgetry; instead, we got three and a half hours of software and services – gaming, messaging, Larry Page wistfully envisaging a geeky utopia. You can perhaps excuse us for getting carried away in our expectations. I/O 2012 was a huge spectacle, with lashings of shiny new hardware only overshadowed by skydiving Glass daredevils and Sergey Brin looking moody on a rooftop. In contrast, 2013’s event brought things a whole lot closer back to the developer-centric gathering that the show had originally been established as. Glass was conspicuous by its on-stage absence, and the new Nexus tablets that had been rumored were also no-shows; the emphasis was firmly on how the components of Google’s software portfolio were being refined as the mobile and desktop battles waged on.

A lot of people were disappointed by the absence of hardware. Google’s largely a software and services company, of course, but we’re still trained to expect shiny new gadgets first and foremost. What I/O proved to be was a reminder that the industry has moved on, and that it’s high time we recognized that.

“Specs are dead” is an opinion growing in prevalence among those following the cutting-edge of phones and tablets. There’s a limit to the usable resolution of a smartphone display, for instance – once your eyes can’t make out individual pixels, do you really need to step up to Ultra HD? – and to the speed of a tablet processor. The areas that still need real advancement, like high-performance batteries, are evolving too slowly to make a difference with each new generation.

Hardware used to make a big difference to the usability of a device. Now, it’s just a question of badge-loyalty and aesthetics. What really makes the difference is the range of applications and services that are on offer; not solely the raw count of available apps that gets trotted out at every big press event, but whether the specific titles the user needs are on offer to them.

Software is at a tipping point, too, though. Android used to be clunky and ugly; now it looks great, and the gap between the instant usability of it, iOS, and Windows Phone is arguably nonexistent. The software race has moved on, away from silo’d applications and slick UIs to where our phones – and the companies that make them – are finally considering context alongside capability.

Context is a tricky thing to explain, certainly compared to the instant crowd-pleaser of a big OLED screen or a blisteringly-fast, multicore processor. Put simply, it’s a more intelligent way of your phone or tablet integrating itself into your life, whether that be more time-appropriate notifications, an awareness of the people around you, or of the other devices you might use. It’s about predicting rather than just reacting. 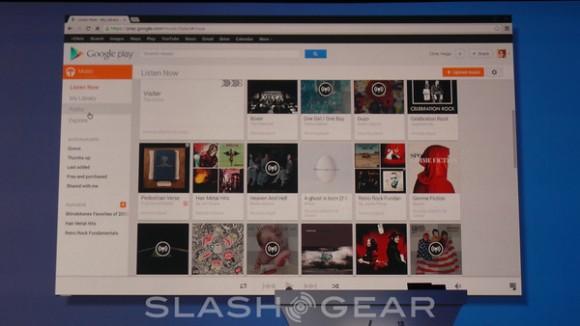 Google’s arguably doing the best at that of all the platform companies, and I/O was its opportunity to demonstrate that. Google Now is the most obvious expression of a system that offers up suggestions instead of waiting for you to go hunting for answers, but through the I/O keynote we saw signs of the disparate strands of Google’s products coming together in intelligent, time-saving ways.

Google Maps, for instance, won’t just autocomplete your recently-used addresses, but learn from your preferences in restaurants and other venues and make suggestions it thinks you’ll enjoy. Google Play Music All Access has a ridiculous name, but its ability to build dynamic playlists based on your favorite tracks will help cut down on one of the most common complaints about cloud-jukebox services: that they overwhelm with choice, and subscribers simply end up listing to the same playlists over and over again.

The new Highlights feature in Google+ is another example of the cloud being clever, not just capacious. As many have discovered, thousands of photos quickly become unwieldy when it comes to sifting through them for the best shots, no matter whether you’re storing them locally or from somewhere in the cloud.

Google’s ability to pick out the cream (and give them a little auto-enhancing along the way, just to make sure you’re looking tip-top) could mean you actually end up looking at them more, rather than feeling guilty because you’re not manually sorting them.

Google+ remains the big social network people love to slam, but it’s also the glue that looks set to hold all of these personalized services together. Just as Google hinted back in 2012, when it controversially changed its privacy policy to explicitly allow services to share information on the same registered user between themselves, the key here is the flow of data. That might not actually require people to actively embrace Google+ – indeed, they may well not even know they’re using it – but it will cement its relevance in a way that Facebook can’t compete with. 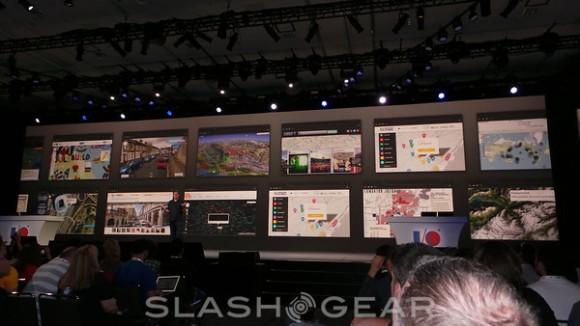 Make no mistake, context is the next big battleground in mobile. As our smartphones have become more capable, they’ve also become more voracious in their appetites for our time and attention. A prettier notifications drop-down is no longer a legitimate solution to information overload: pulling every possible alert into one place doesn’t make it any easier to cope with the scale of the data our phones and tablets can offer us.

The device which understands us better, and which handles our information in a way that’s bespoke, not one huge gush, will control the market. Google knows that; it also knows that hardware is basically just a way of getting a screen in front of users’ eyes, whether that be on a Chromebook like the Pixel, a phone or tablet from the Nexus series, or suspended in the corner of your eye like Glass.

In the same way, speech control – which also demonstrated marked improvements at I/O – is just another way to make sure people can engage with your products, on top of what touching, tapping, and clicking they’ve already been doing. More flexibility means more usage; more usage means more data to collate and customers that are further wedded to Google rather than any other company.

All of Google’s services are gradually interweaving. Google I/O 2013 is an ecosystem play, and it’s one of the biggest – and arguably ambitious – we’ve ever seen. It’ll drag Google+ with it along the way, and it might even kickstart the “internet of things” when we start to see some legitimate advantages of having every device a web-connected node. Google didn’t give us a new phone for our pocket or a new tablet for our coffee table; instead, it gave us so much more.