The Google Home Hub is a big idea in a compact package. Bucking the trend of larger and larger smart displays, this latest container for the varied talents of the Google Assistant occupies a smaller footprint than most of its rivals demand. The size – and the competitive $149 price tag – may be diminutive, but the Home Hub’s ambitions are not.

Your first reaction to seeing Home Hub in person will probably be the same as mine: “oh, it’s so much smaller than I expected.” At 7-inches, it doesn’t sound much different to a 10-inch Amazon Echo Show or Lenovo Smart Display. In reality, you’re talking about something with roughly half the overall screen real-estate. 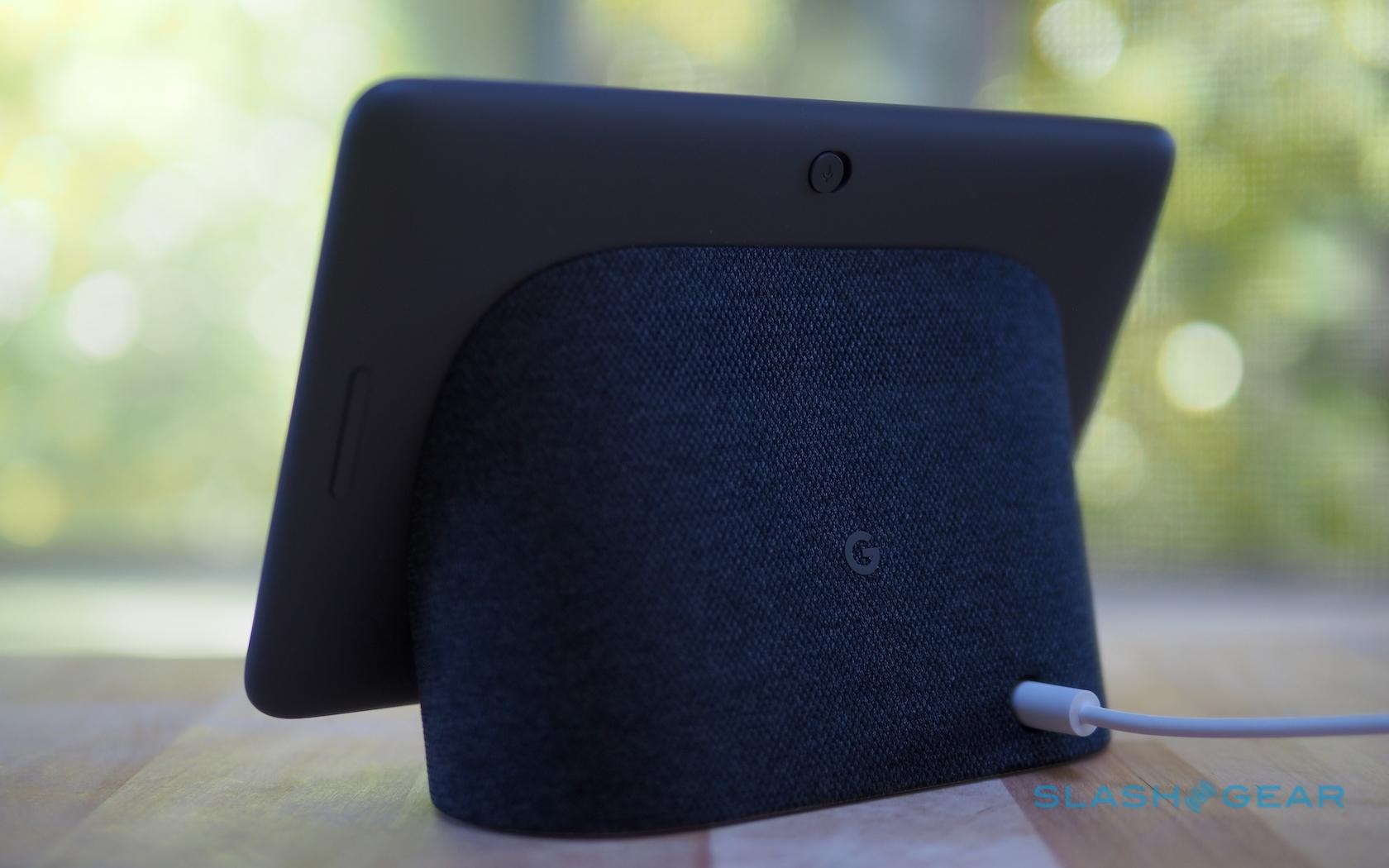 Combine that with the minimalistic, fabric-covered stand that hides behind the touchscreen, and you’re talking about a very compact gadget. Controls are similarly minimal, too: a physical switch that shuts off the microphone, and a pair of volume buttons. Despite the scale, Home Hub had no problems hearing me from across the room, just like a Google Home could.

On the speaker side, there’s more volume than you might expect given the dimensions, though Google can’t work magic. The full-range speaker is apparently designed to fire out from under the screen; it’s definitely loud enough to hear the Assistant respond, and for casual music playback, but this isn’t going to replace your Sonos One. Happily you can pair a Bluetooth speaker for beefier audio, or indeed use Home Hub to control multi-room playback on numerous connected speakers. 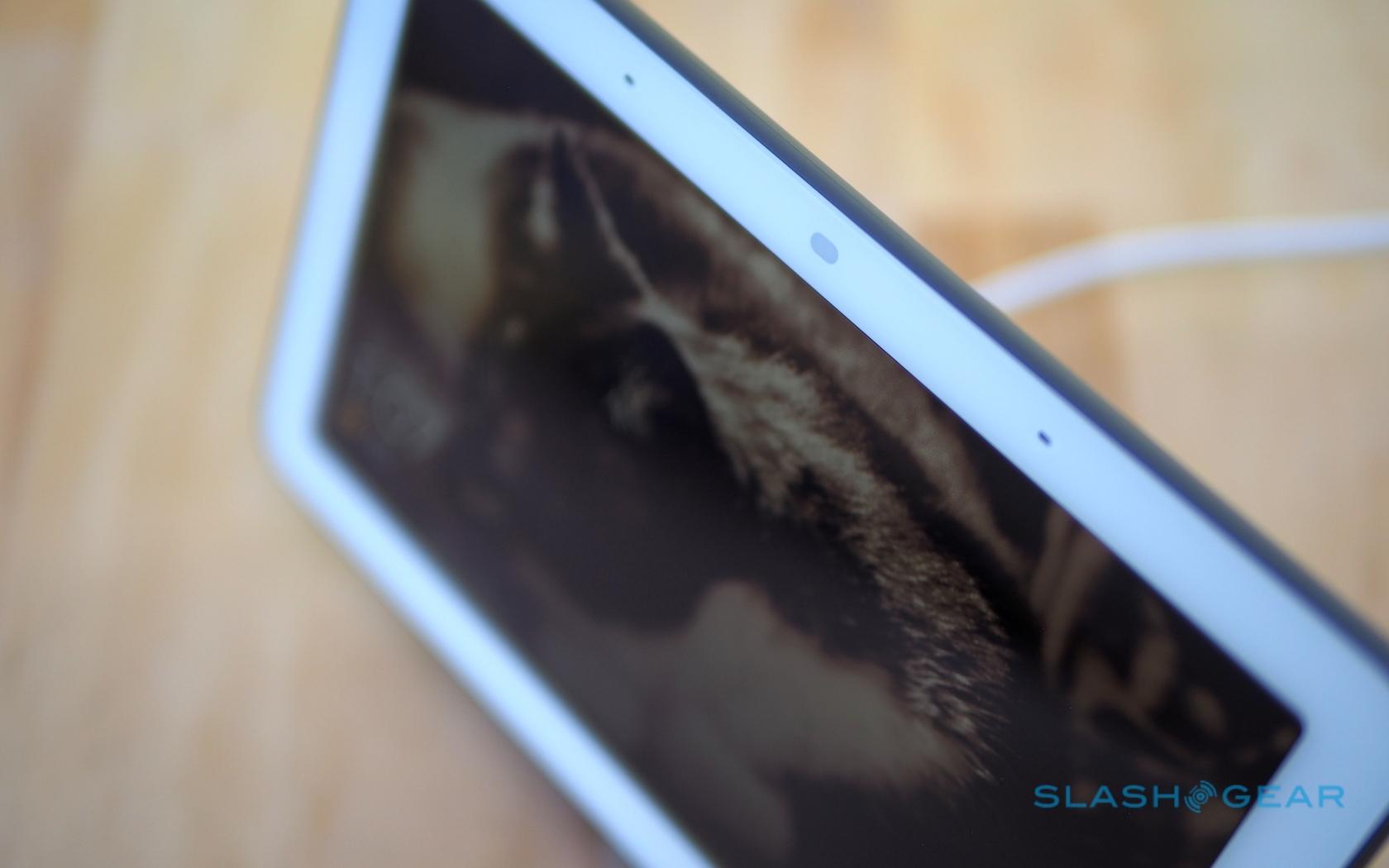 It’s not just the outside which is intended to be more friendly on the eyes. Google has equipped the Home Hub with what it’s calling “Ambient EQ” – basically an ambient light and color sensor – with which it can adjust not only how bright the screen is but its color tone too. Think along the lines of the iPhone’s True Tone, but in a smart display. 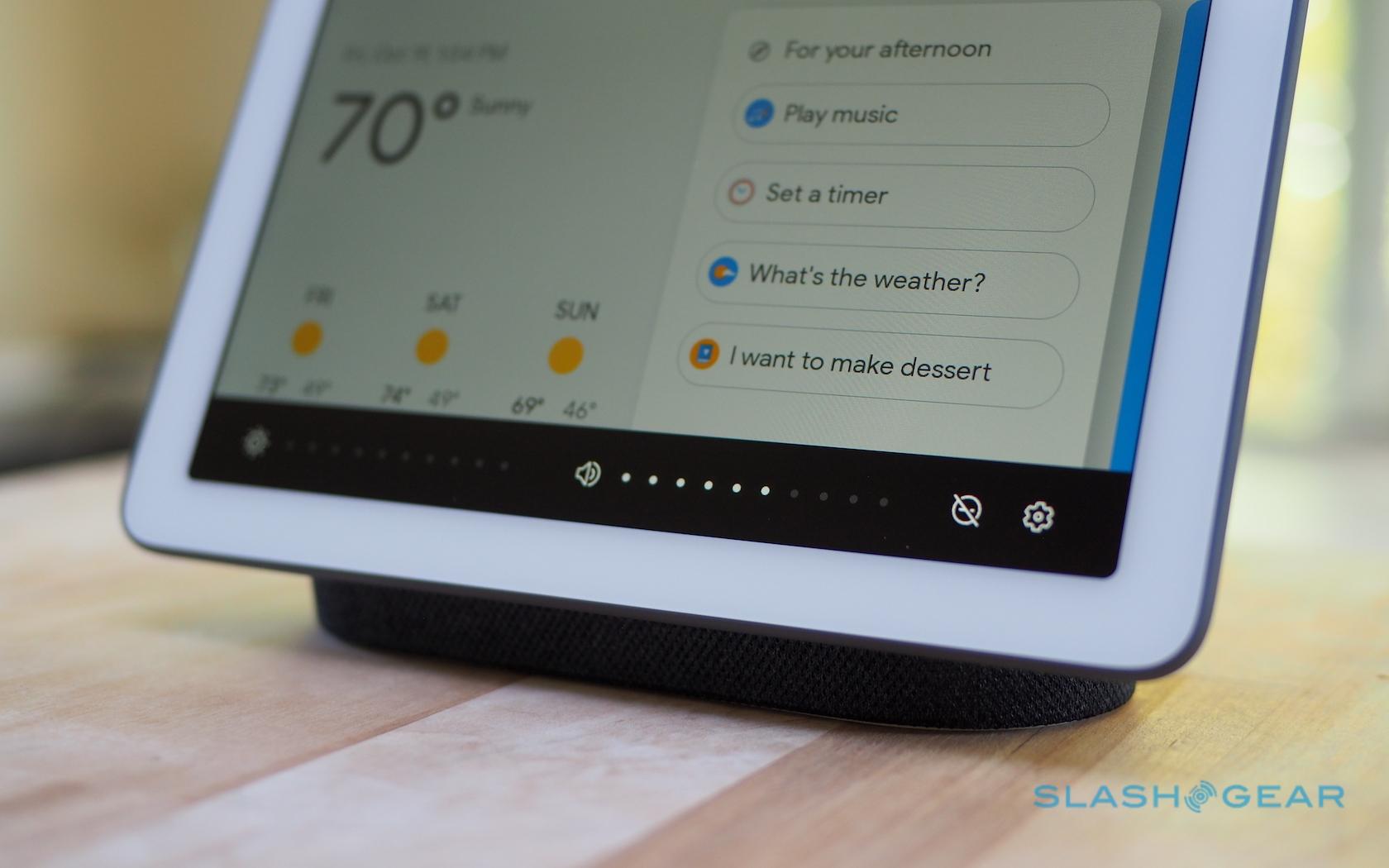 In practice it’s subtle, but that’s by design. Certainly, alongside a glaring Echo Show, the Home Hub’s screen looked warmer as the evening approached, matching the lamps I turned on. As with True Tone, it may well be that you only really notice the difference if you disable it. You can tune how Ambient EQ adjusts the brightness, though oddly only from the Google Home app. If you swipe up on the Home Hub’s touchscreen and use the brightness slider there, it’ll also disable Ambient EQ. 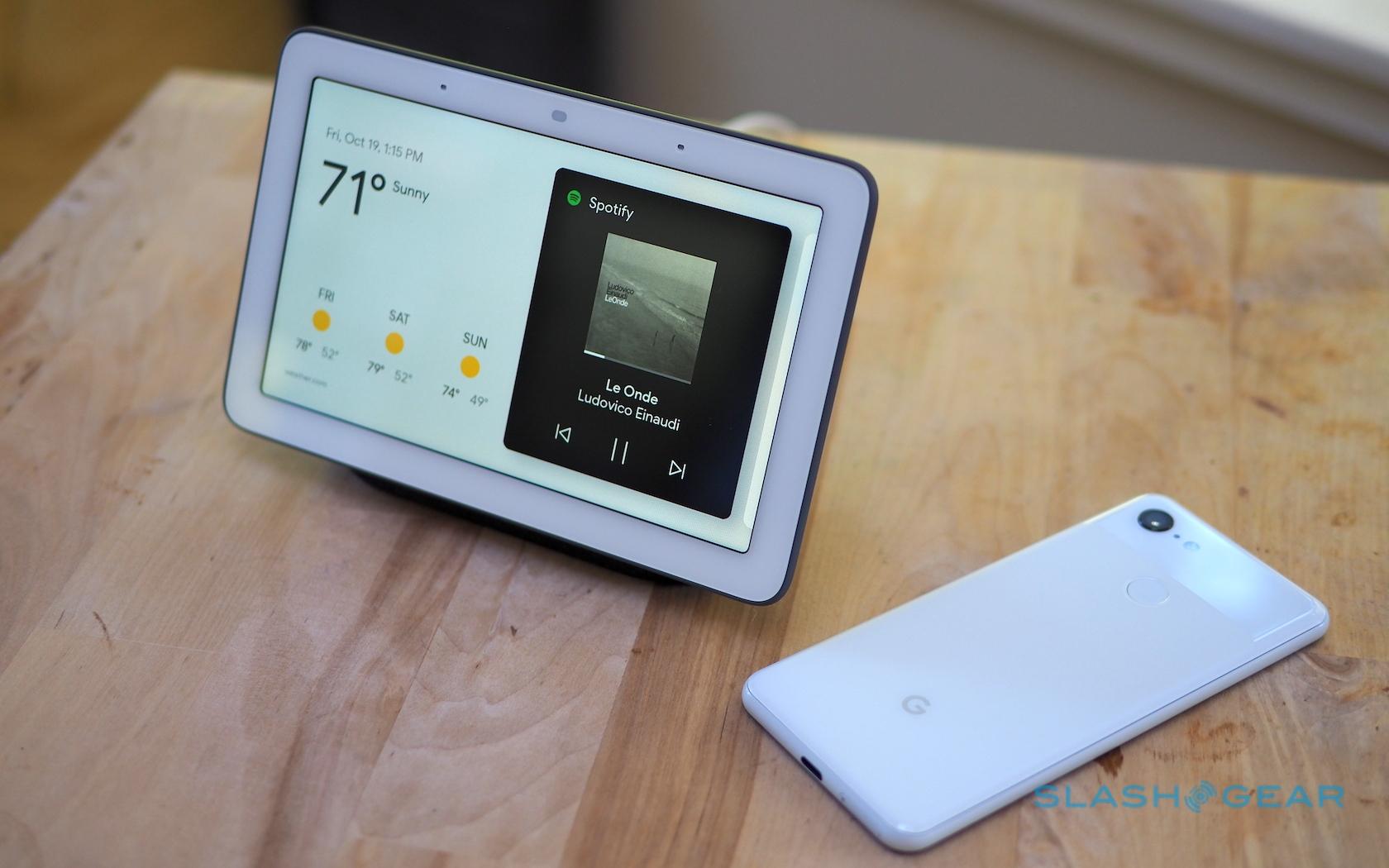 The other big people-friendly feature is actually an absence. Despite Google pushing, well, what seems like half a dozen video capable products these days, the Home Hub arrives with no camera whatsoever. That, the company says, is a reaction to general mistrust of connected devices that might be able to see you when you don’t necessarily want them to, and I suspect it’s a sensible one. Several people have expressed frustration with Amazon’s Echo Spot to me, seeing it as the perfect scale for beside their bed, but uncomfortable with the idea of bringing a camera into the bedroom. Considering how many devices we already have with cameras, I don’t think Home Hub’s omission will count against it.

At first, placed near to a second-generation Echo Show, the Home Hub’s diminutive display seemed instantly overshadowed. Your eye automatically goes to Alexa’s screen, its cycle of headlines designed to catch your attention and encourage an interaction. Even Google’s default brightness seems a notch lower than that of other smart displays; a little less glaring and a little more subtle. 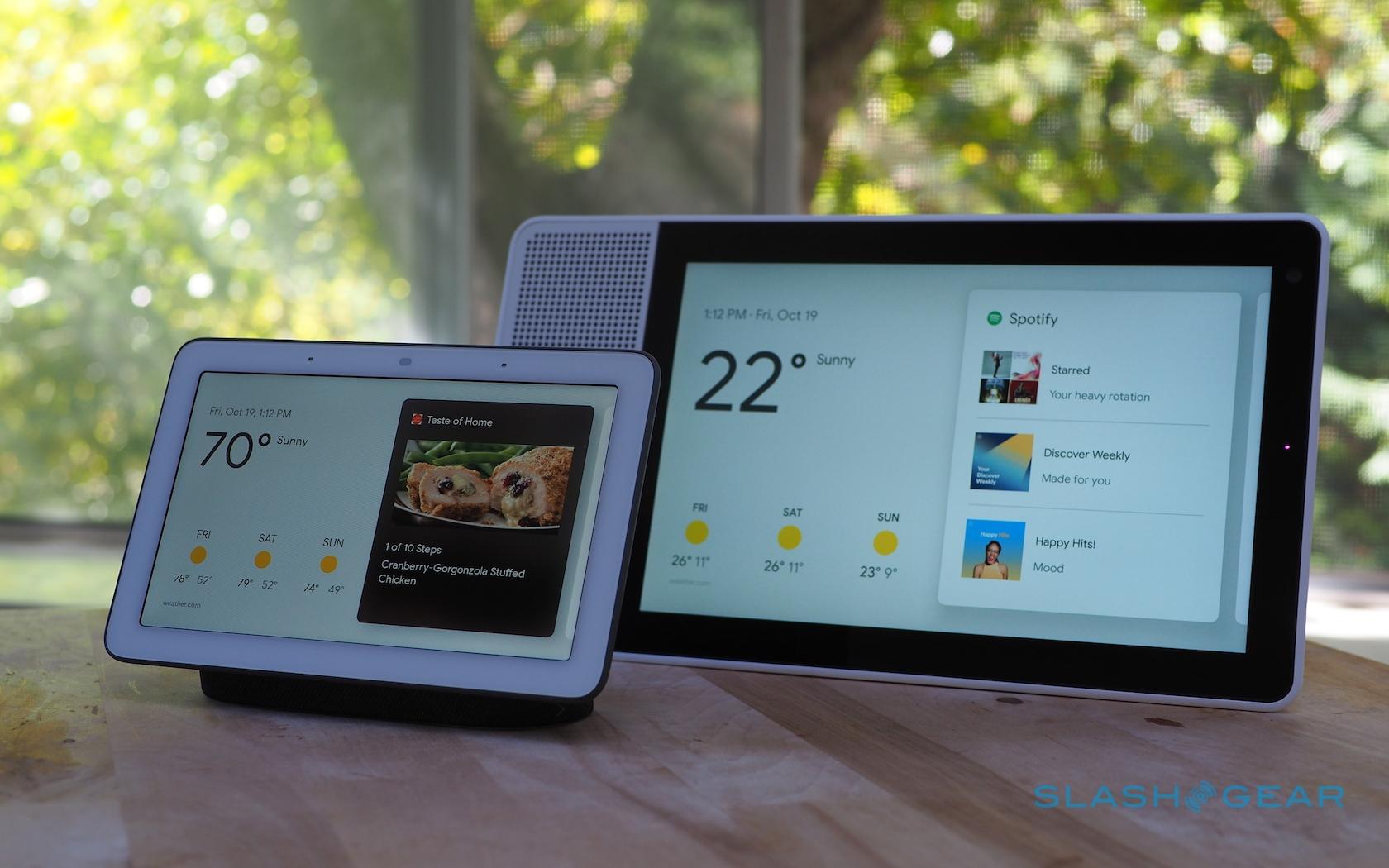 That subtlety, though, is increasingly the Home Hub’s charm. It’s less grabby than Amazon’s screen, less needy. 7-inches, a display size more akin to an oversized smartphone than a tablet or TV, lends itself to more intimate encounters.

It comes into its own with Live Albums, of course, that charming and discreetly clever feature of Google Photos that automatically corrals images of the same person – or people – into a perpetually updating folder. In moments I was able to create a new album of our cat, share that from my personal Google Photos account to the Home Hub signed into my work account, and have that slideshow cycle through. 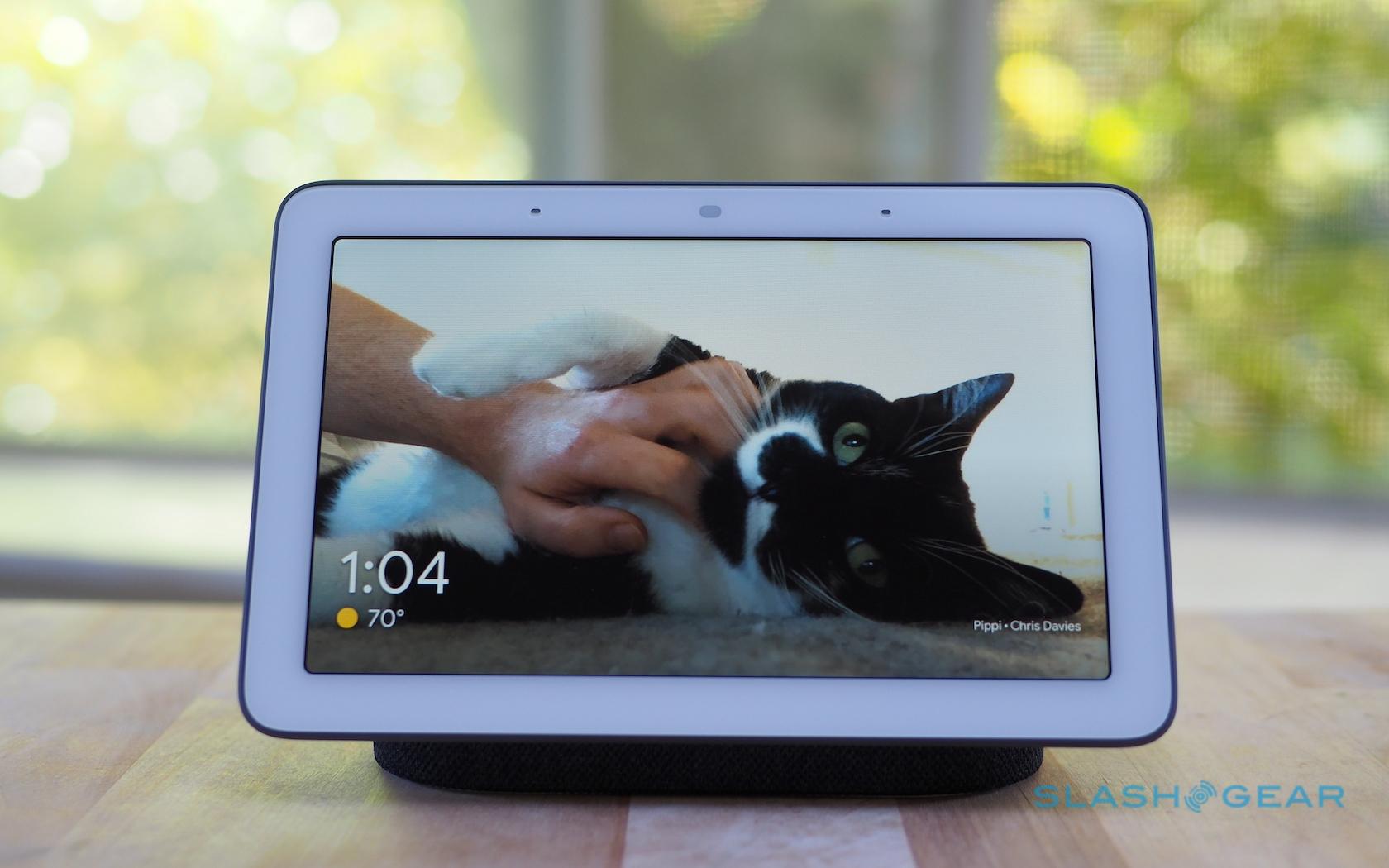 Google, despite its vested interest in Google News, doesn’t have a headline option for Home Hub. You can turn on Facebook content in the experimental settings, if you dare subject yourself to that morass of awfulness, but the default is quiet, subtle photography. You could have the Home Hub on your nightstand, or an end table in your living room, and not feel like it’s competing for attention with everything else.

Like Lenovo’s Smart Display, the Google Assistant is the smarts behind the screen. As on the Lenovo Smart Display, results come with both spoken and visual feedback, whether as simple as an illustration or as involved as a YouTube video or a weather forecast graphic. The Assistant is pretty smart, too: if you ask something fairly generic, like “Play me The Daily Show,” it’ll try to pick the most recent episode. 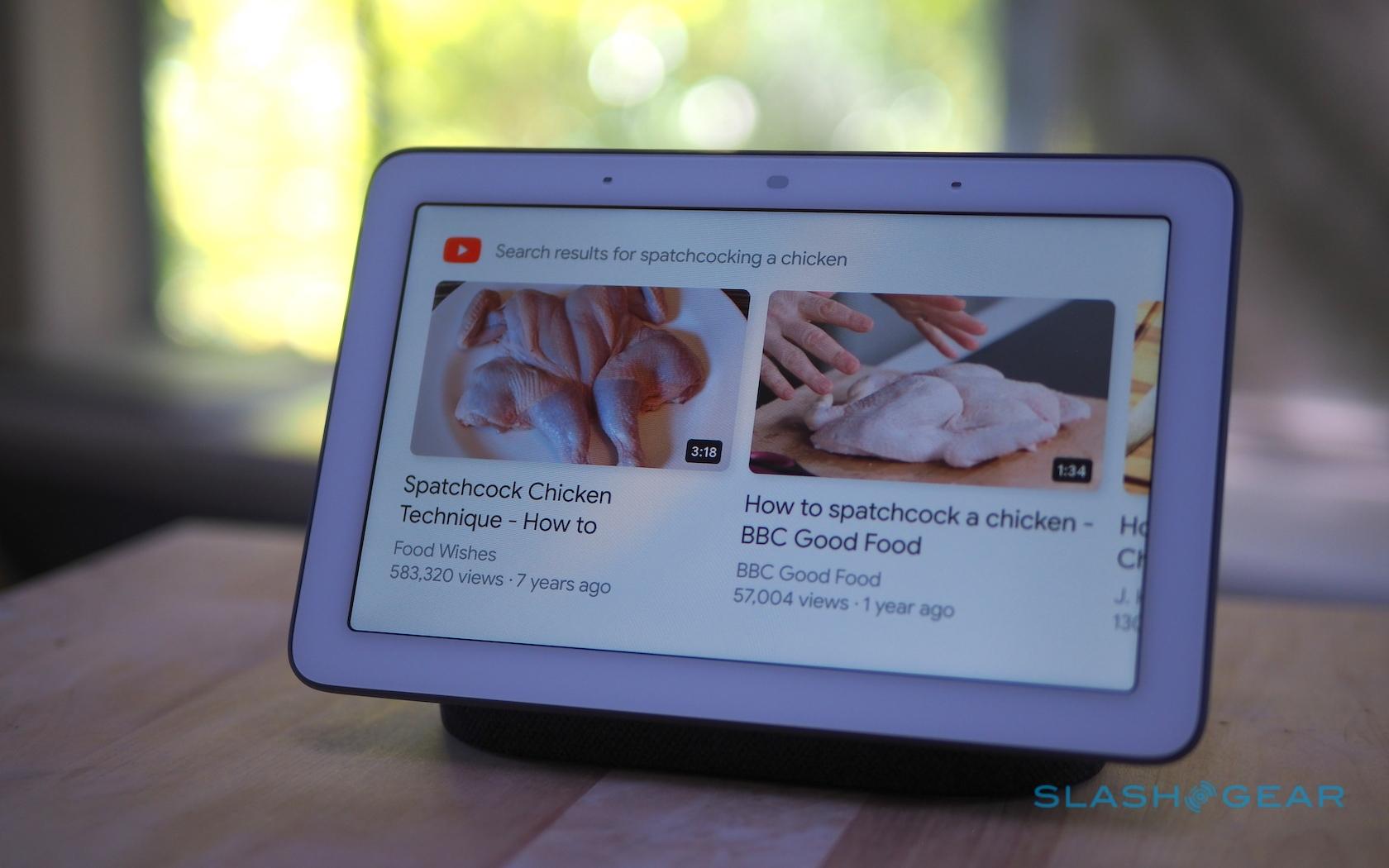 The Home Hub can act as a speakerphone, too, at least for outgoing calls. You can ask to place a voice call to any contact in your address book, or after searching for a business. Voice profiles – where you teach the Assistant what you sound like, and it matches the voice to the right account – promise to prevent unauthorized access to your information. As with setting up a new Android phone, if you’ve already taught the Assistant on a previous device, the Home Hub will borrow that profile rather than forcing you to go through the steps again.

A sous-chef, of sorts

The kitchen is a common place for smart speakers and smart displays to end up, and so Google is making recipe assistance a cornerstone of the Home Hub proposition. Partnerships with a variety of recipe sites – including Allrecipes, Food Network, Tasty, and The Kitchn – bring specially laid-out ingredient lists and instructions, with the Assistant walking you through each step. It can be entirely voice-controlled, too, useful if your hands are wet or sticky. 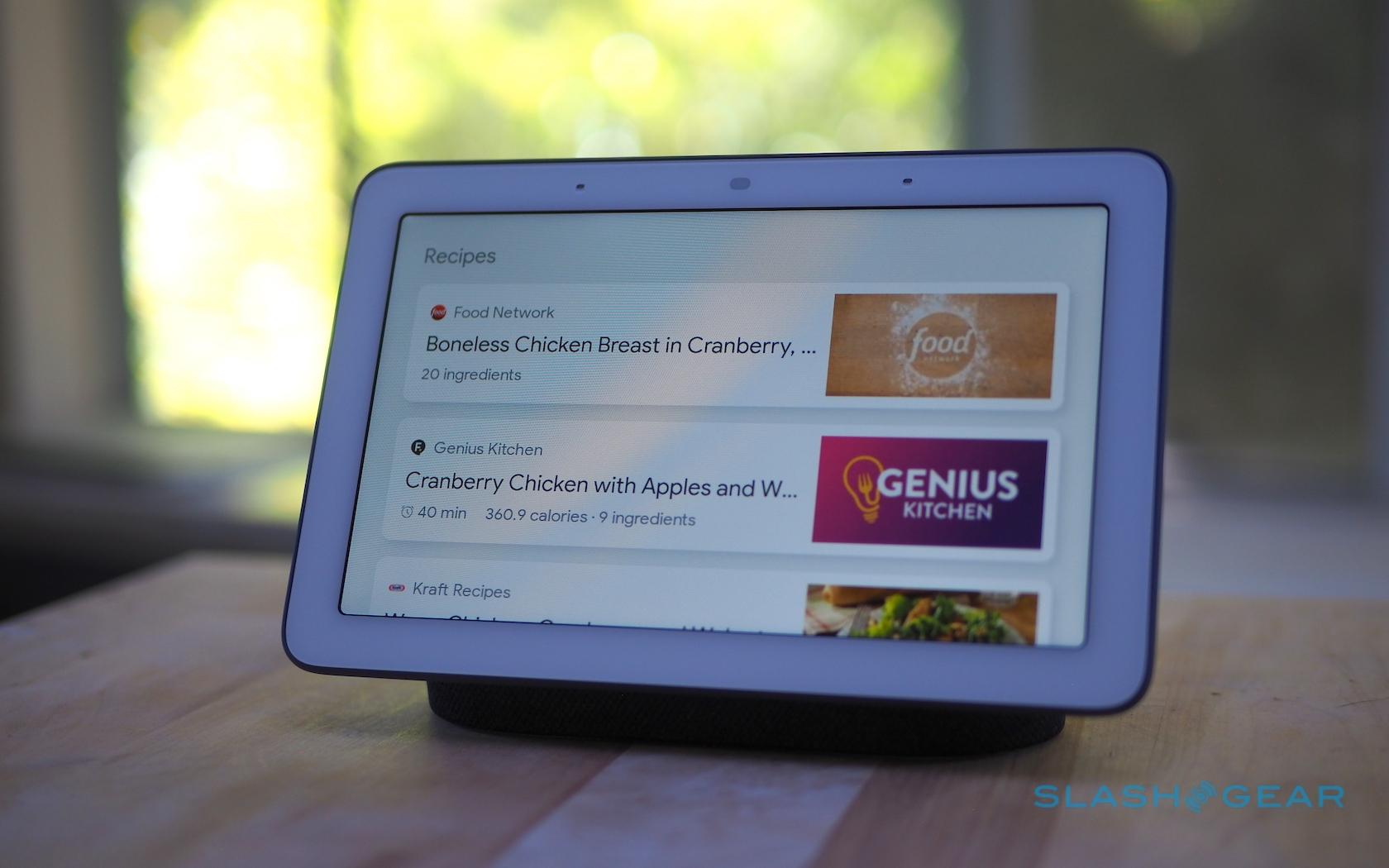 As you cook, the Assistant remains accessible for those useful conversions and timers that smart speakers have always been particularly handy for. When you’re done, you’re dropped right back to the step you were last up to. Even if you return to the home screen, a recipe-in-progress will still show up as the live tile there, making it easy to jump back in. 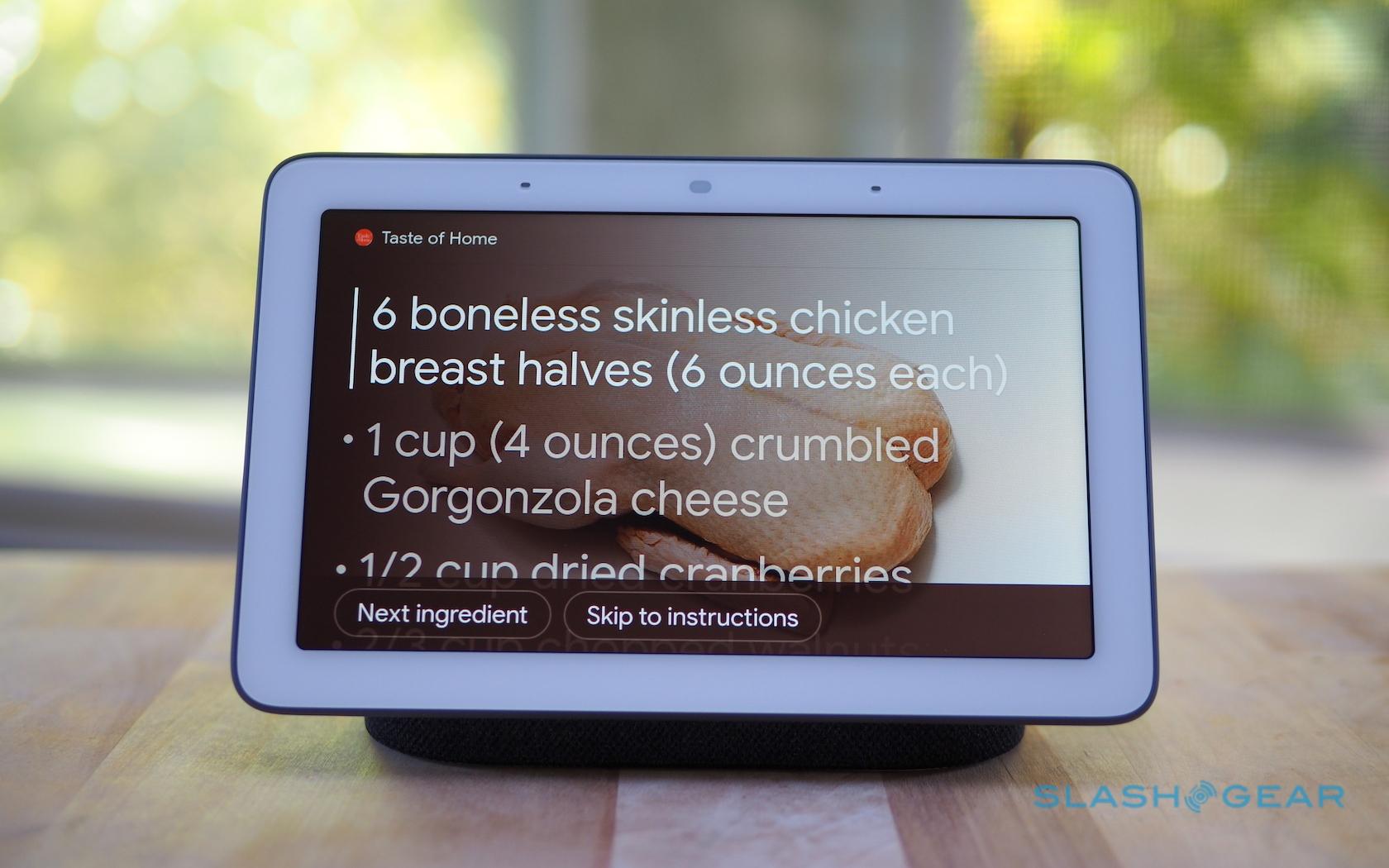 It’s useful, but not perfect. You can ask for specific recipes, or for a search based on what ingredients you have to hand – “show me recipes with chicken, cherries, and green beans” – but browsing on the Home Hub’s screen felt awkward compared to on my phone. Right now there’s no way to locate a recipe on your Android or iOS device and then cast that directly to the Home Hub’s display, even if it’s from one of Google’s initial partners. Instead you have to search for it again, by name. 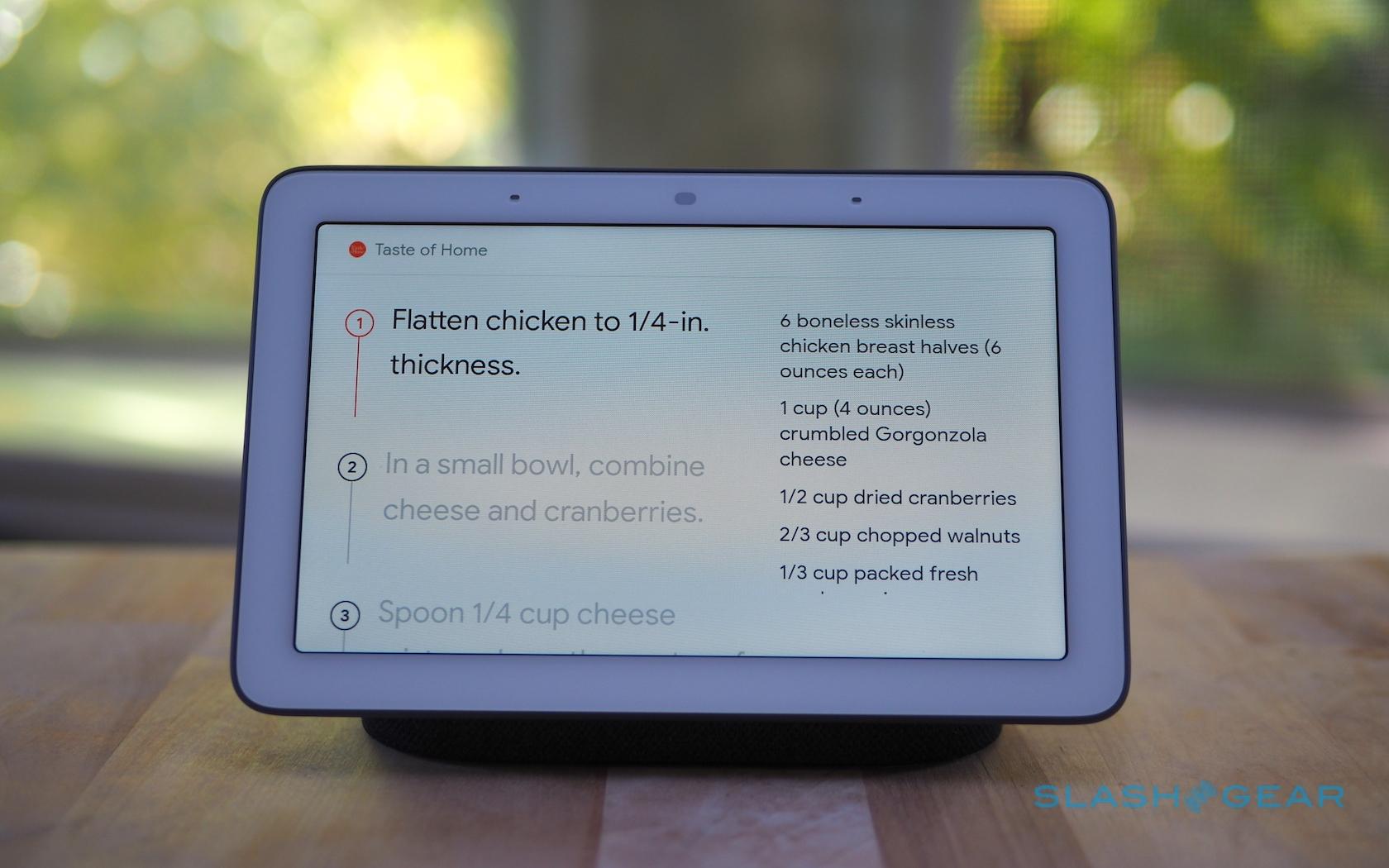 The Home Hub introduces Google’s new smart home interface, accessed with a swipe down from the top of the home screen. That offers up shortcuts to the common features like lighting or music. Alternatively you can tap through and see all of the devices available to play with. 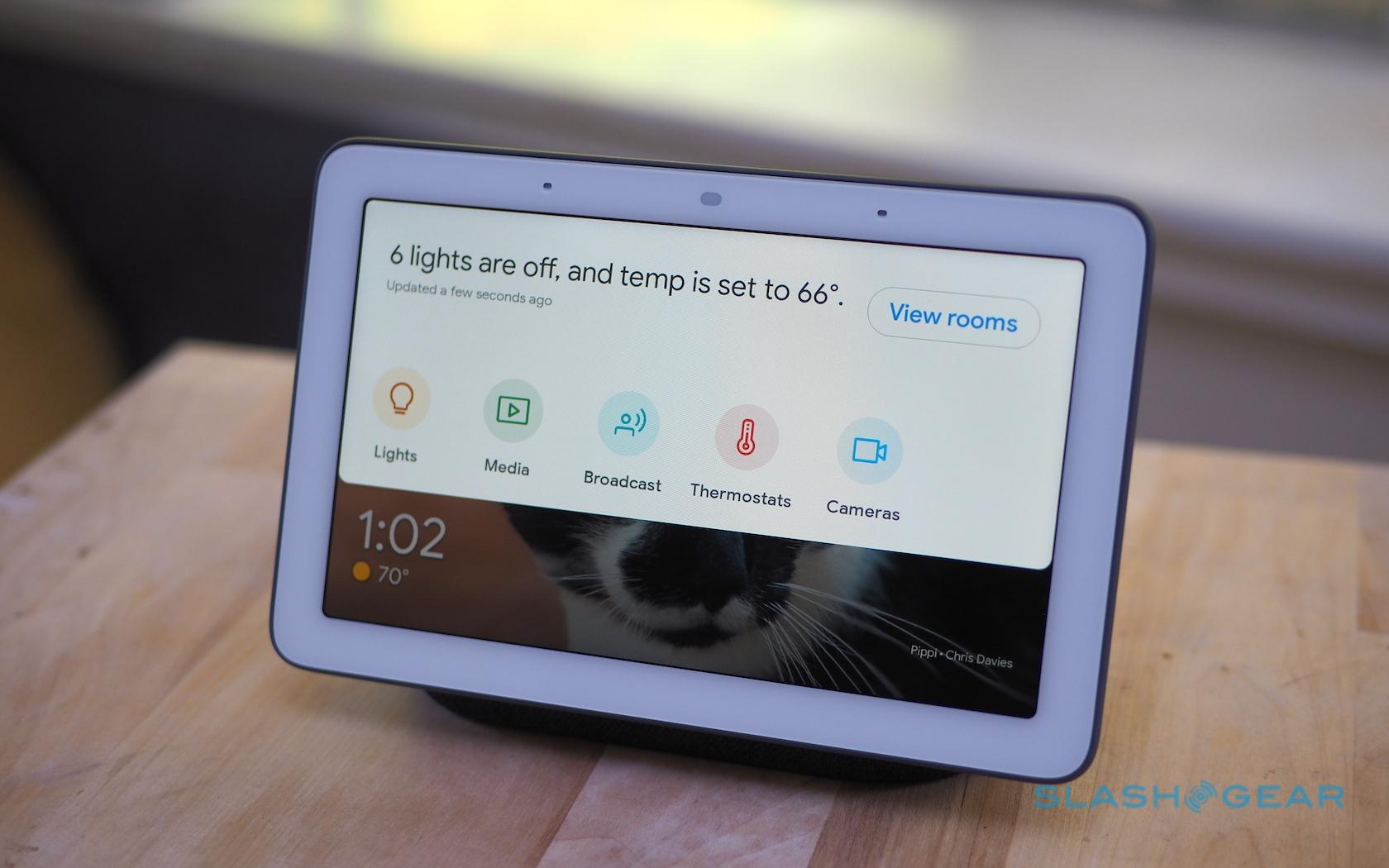 Each room shows up as a tile, with all of the connected devices – lights, Home Hub, smart speakers, Chromecasts, and anything else – grouped together. Tapping them brings up whatever is most contextually-relevant: brightness and color for bulbs, maybe, or music playing for a connected speaker. You can control it all silently, too, which is nice. Sometimes it’s just easier and quicker to tap a few icons and have everything adjust accordingly, rather than issue a stream of commands to the Assistant. 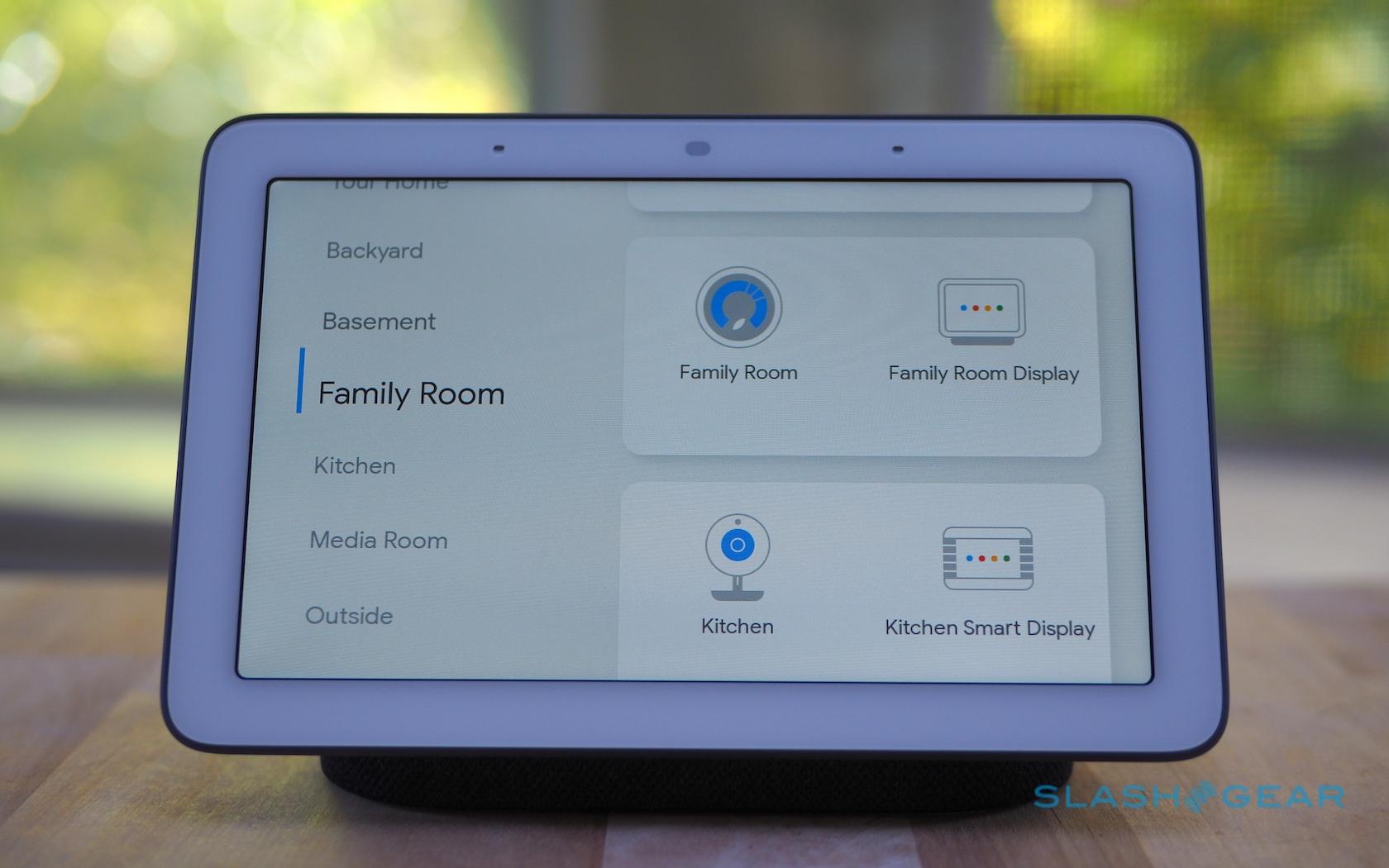 With the right smart TV, or set top box, you can control volume, channel, and other features directly from the Home Hub’s display. Since it’s compatible with universal remotes like Logitech’s Harmony, too, it can act as a far friendlier interface to your whole A/V shelf. Unfortunately there’s no way to have that UI stay on-screen; after a few moments it’ll automatically go back to ambient mode, and you’ll need to tap back through the menus to bring it up again.

For the most granular control, you’ll probably want to stick to the native apps of each device. On the flip side, the Home Hub’s routines allow you to combine multiple actions addressing several devices into a single command. “Hey Google, get the TV room ready” can have your lights adjust, your TV and audio system turn on, your Chromecast boot up, and YouTube TV load, all in one fell swoop. 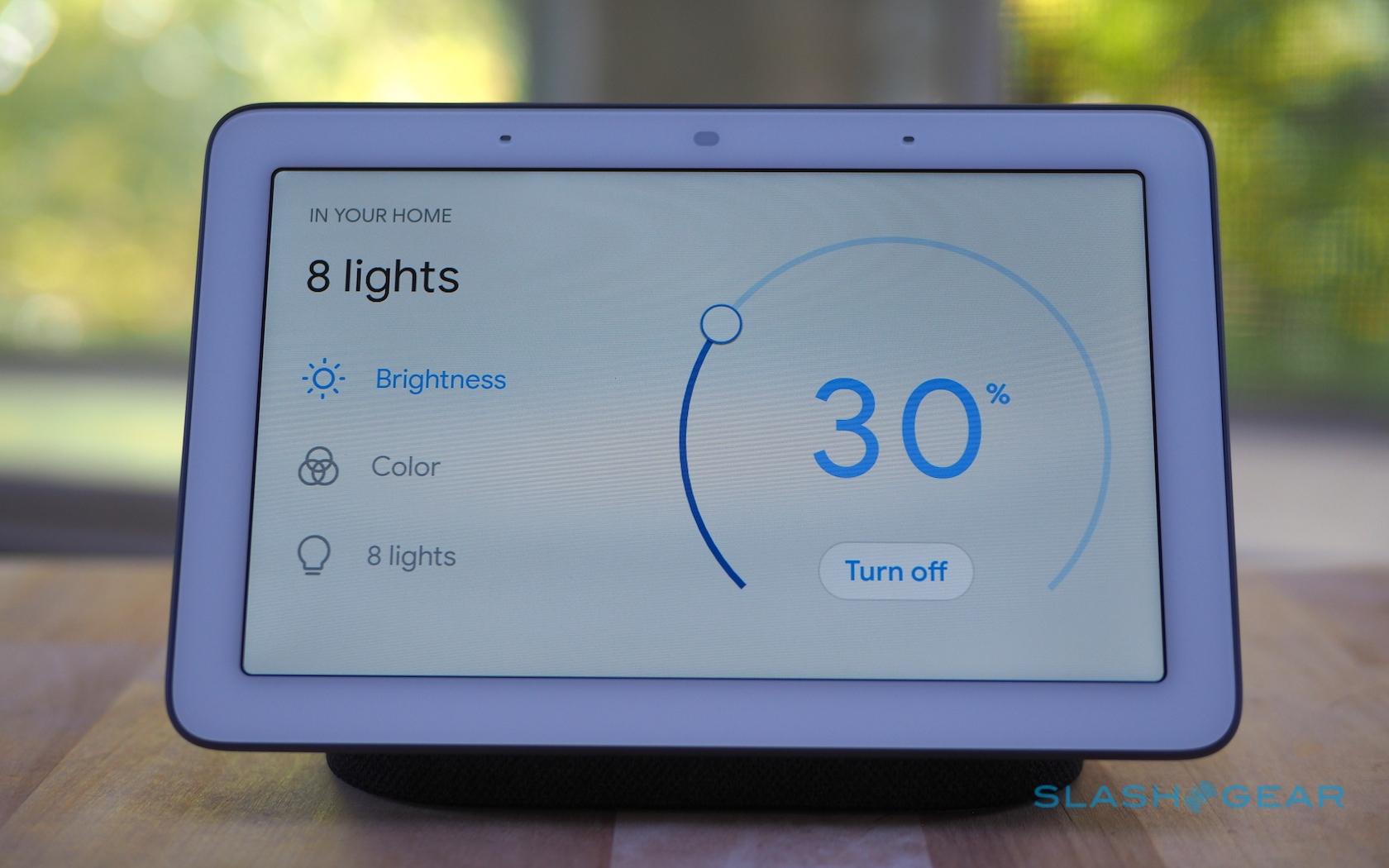 Google Home Hub is smaller than Amazon’s Echo Show and Lenovo’s Smart Display, and so is its price. At $149, in fact, it’s only $20 more than a Google Home. That seems like a no-brainer, which I suspect is what the search giant is counting on. 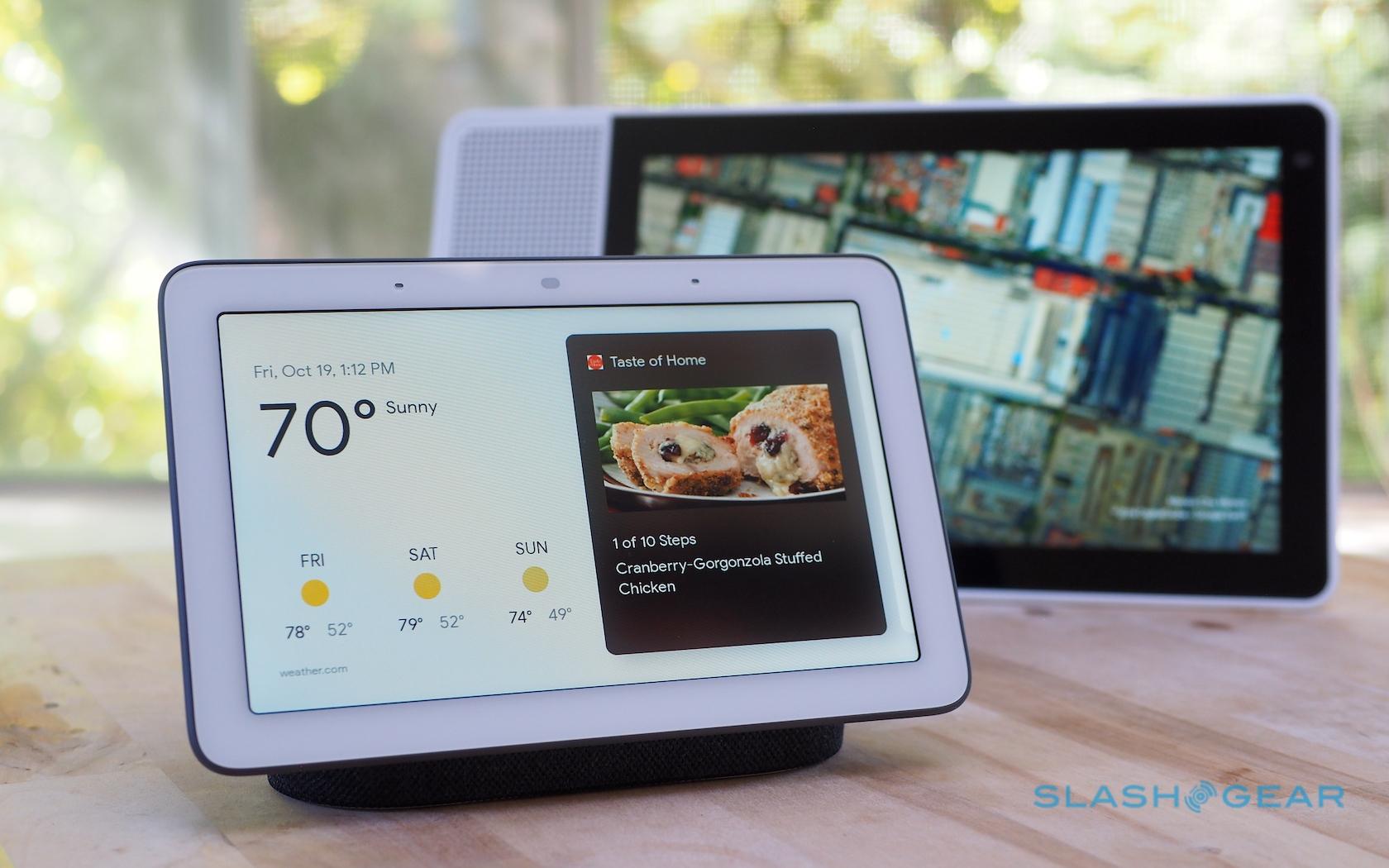 As we’ve seen happen with Alexa devices, the smart home war is about how quickly you can colonize. Getting into as many homes – and as many rooms in as many homes – as possible is key. If your AI’s name is the first that comes to mind when people have a question, or want music played, or simply want to hear a dumb joke, then you’re winning.

By those rules, the Google Home Hub scores on several points. It’s affordable, creates none of the camera-fueled paranoia of the competition, and it looks cute and unthreatening. Human-scale, rather than some brash, blaring screen demanding its tithe of attention. When everybody else went big, Google paradoxically went small, and the Home Hub is all the more impressive because of it.