Google co-founder Sergey Brin’s Project Glass outing last night has been revealed in high resolution, with photographer Thomas Hawk showing off some detailed snaps of the wearable AR headset. The first public sighting of the head-mounted display – at least to be caught on camera – the Project Glass prototype is apparently functional to at least some extent, though still relatively glitchy according to Brin.

According to the exec, right now you mostly see the headset restarting, though Scoble reported seeing a blue light flashing in the headset too. However, Google has high ambitions for the system, with Brin revealing that the eventual goal is for it to be self-contained.

It’s unclear from these shots as to whether there’s a cable involved, connecting the prototype headset to some sort of battery pack or processing unit. Suggestions earlier indicated Brin could have been carrying external parts of the system in his backpack, the straps of which you can see in the photo below.

Announced earlier this week, Project Glass is yet to be dated for a full commercial launch. You can see high-res versions of Thomas Hawk’s photos here. 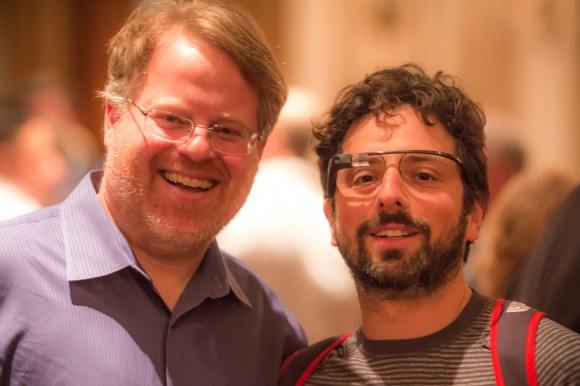