Wireless car charging is a step closer to a 2020 launch

Future Chevrolet, Cadillac, and other GM electric cars and plug-in hybrids could soon recharge without needing to be plugged in first, thanks to a wireless charging deal. The agreement, with WiTricity, sees General Motors testing out the wireless power transfer company’s latest Drive 11 park-and-charge system with a mind for offering it to EV and plug-in EV owners. If that pans out, future Volt and Bolt EV drivers might no longer have to fiddly with cables and adapters.

Instead, it would be a case of parking the car on top of a special charging plate. That “floor pad” would wirelessly transfer power to its counterpart integrated underneath the car. Currently, the prototype system GM and WiTricity are experimenting with supports both 7.7 and 11 kW charge rates.

Although many electric vehicle owners say they appreciate the ability to recharge in their garage or on their driveway, rather than having to take a traditional gasoline car to the nearest gas station, the change in routine can catch new drivers by surprise. Walking out in the morning only to discover that, because someone didn’t plug in the car to charge overnight, you have to figure out another way to deal with the commute into work is enough to sour you – at least temporarily – on electric motoring. Meanwhile, the hassle of plugging in and then unplugging before you leave can dissuade drivers from making incremental top-ups if they’re using the car frequently through the day. 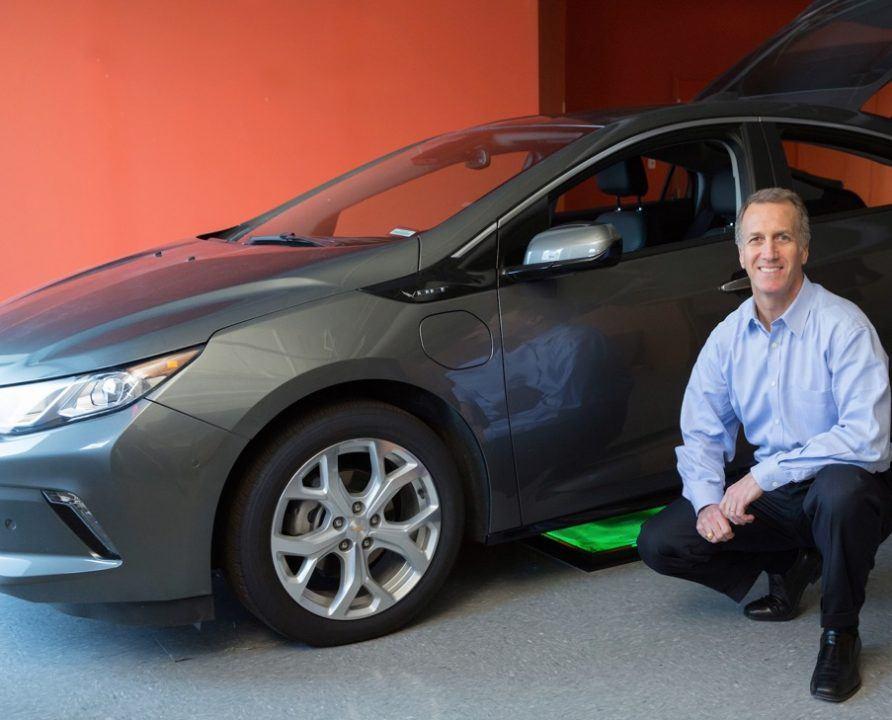 Wireless charging would address all of those issues. In some of the systems we’ve seen previously, the car uses its parking sensors to help guide the driver on top of the best point on the charging pad beneath. Others, generally more expensive, rely on auto-park functionality in the car to take control of the wheel and actively position the vehicle itself.

GM and WiTricity’s goal, though, isn’t just streamlining the process when you get home and want to get inside. The two companies are talking about the potential for wireless charging pads integrated into the pavement in public and commercial parking lots. That way, you’d not have to worry about plugging in while your car was at work or at the mall.

For that to be worthwhile, though, there needs to be a standard for wireless automotive charging. They’ve been proposed by SAE International’s J2954 Committee, and WiTricity says Drive 11 is designed to be compliant with those non-final specifications. The company is already working with Toyota, having kicked off trials back in 2014, in addition to big car part suppliers like Delphi and TDK.

Of course, General Motors and Toyota aren’t the only two firms exploring the potential of wireless charging technology. BMW and Mercedes-Benz announced they would partner on the tech back in 2014, Mercedes later inking a deal with Qualcomm to explore its Halo system. Earlier this year, regulatory filings revealed that Google was looking at the potential of wirelessly recharging its self-driving cars.

Audi’s Prologue concept previewed its take on wireless charging last year, and the automaker has said it intends to embrace high-power versions of the system for its future electric SUV. Not every automaker necessarily believes wireless is the answer, though. Tesla has opted to instead develop a robotic charger – which resembles a segmented metal snake – that could plug itself into the charging port on cars like the Model S, Model X, and upcoming Model 3.

According to SAE International, the wireless charging standard – which will include interoperability between the three different primary technologies – is expected to be finalized in 2018. Testing this year showed compatibility at up to 7.7 kW, with trials to explore higher powered, 11 kW systems, along with autonomous positioning, expected in 2017. However, commercialization isn’t likely until 2020, the organization says.