GM has launched a new electric business, BrightDrop, aiming to corner the market in EV vans and delivery vehicles along with the motorized pallets and software ecosystem to track them. Fresh out of General Motors’ Global Innovation division, BrightDrop – which already counts FedEx among its first customers – will use the automaker’s Ultium platform for all-electric vehicles.

So far, we’ve seen Ultium as the basis of consumer trucks, SUVs, and crossovers, with the promise of other vehicle types in due course. BrightDrop, however, will be using it for an all-electric delivery vehicle, the EV600.

An electric light commercial vehicle, the EV600 is expected to have a range of up to 250 miles on a charge. It’ll recharge via 120 kW DC fast charging support, with the potential for adding 170 miles per hour plugged in. In the back, there’ll be over 600 cubic feet of cargo space, while GVWR will be under 10,000 pounds. 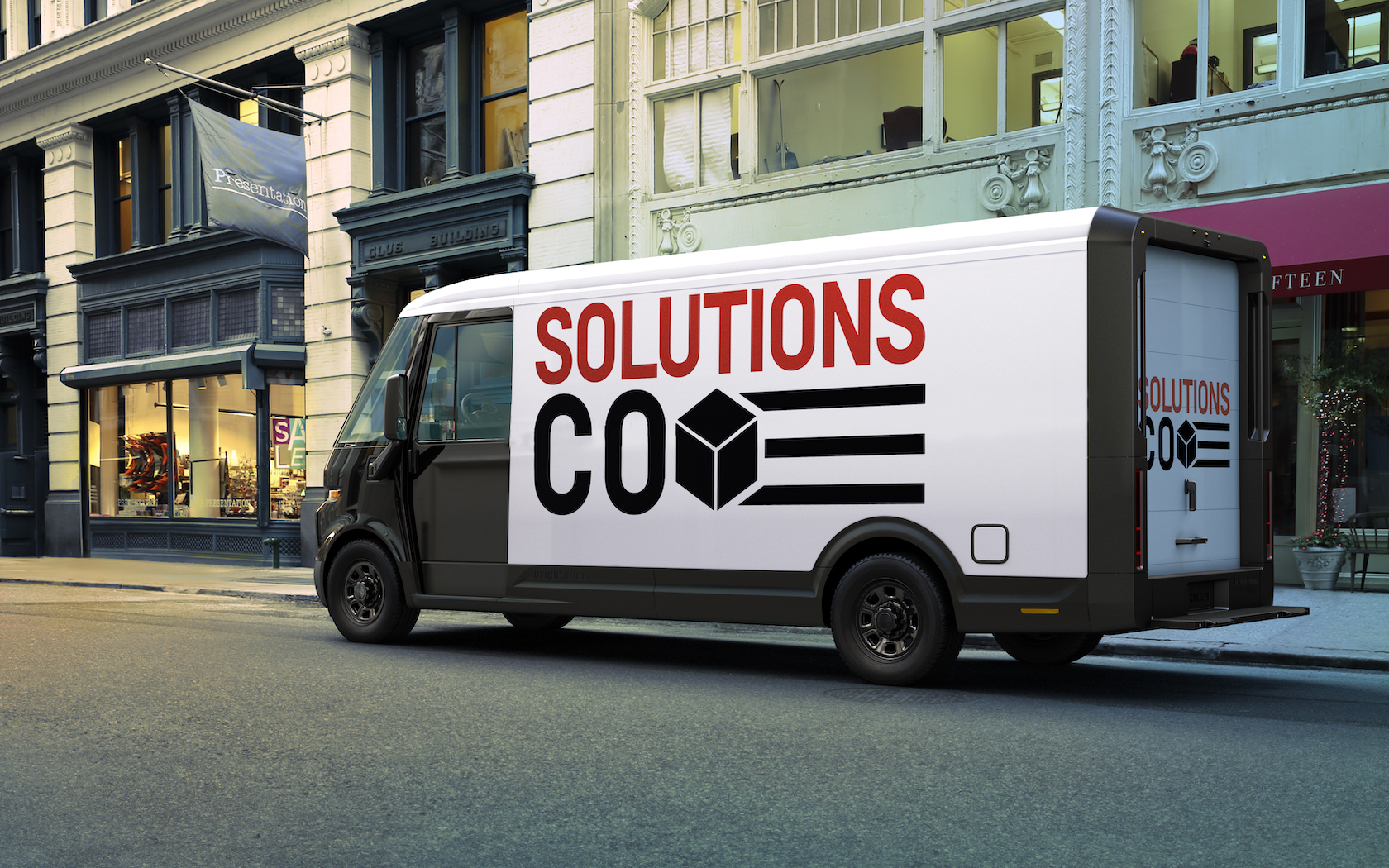 EV600 will have all the tech we’ve come to expect from modern vehicles, including safety features like automatic emergency braking, forward collision alerts and pedestrian braking, and lane-keeping assistance; BrightDrop will also offer a variety of optional feature like blind zone steering assistance, 360-degree cameras, and rear cross traffic braking. The cabin will have a 13.4-inch infotainment display along with front sliding pocket doors; an auto-open cargo bulkhead door will give access to the rear, where a motion sensor security system will be used to keep the cargo safe.

What GM is hoping it’ll be filled with is the new electric pallet developed for the startup. The BrightDrop EP1 will actually be the company’s first product to arrive – later in Q1, with initial deliveries of the EV600 by the end of the year – and is a rechargeable, powered pallet intended to move goods over short distances. 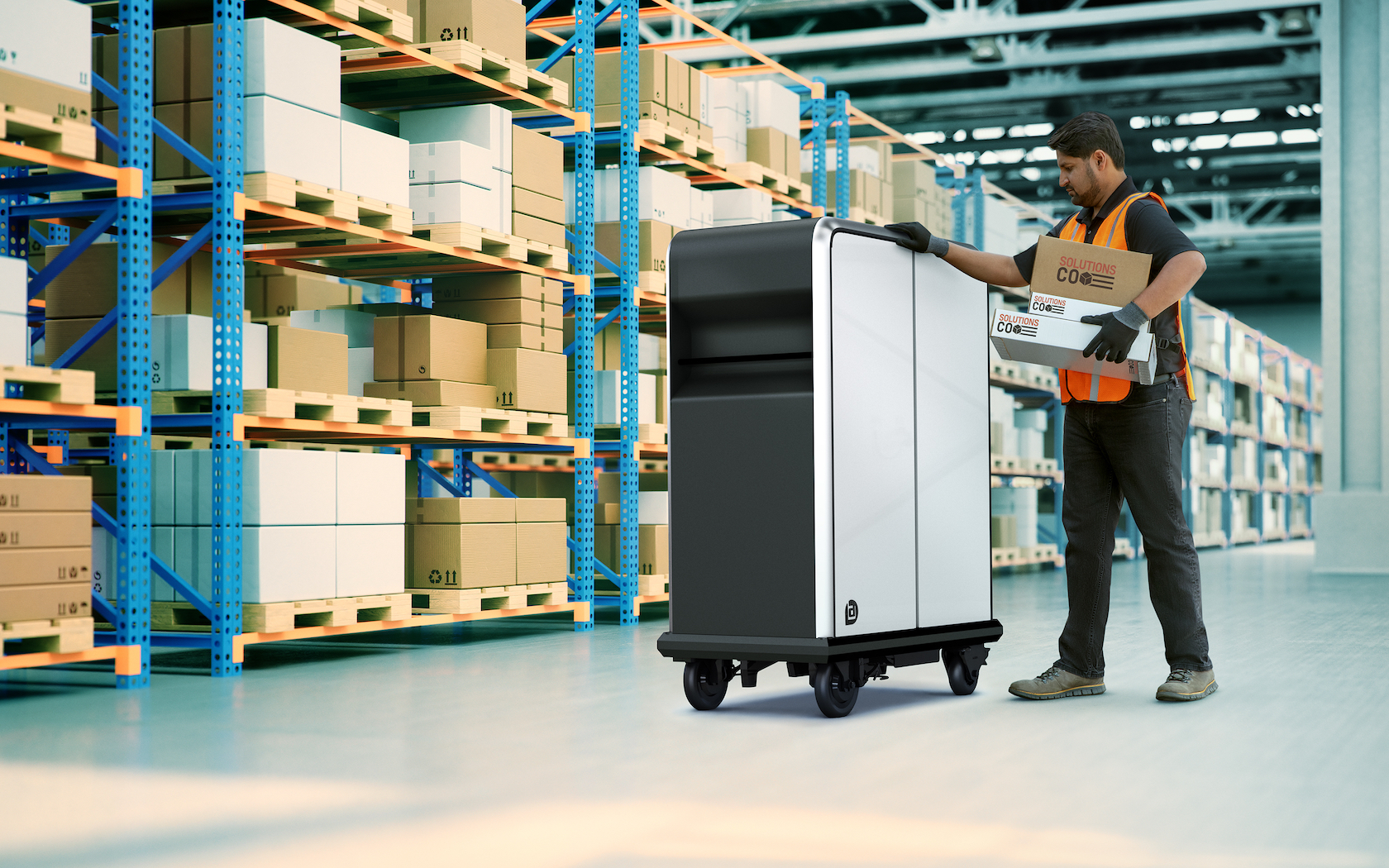 It has an electric hub motor that can drive the EP1 at up to 3 mph – depending on the operator’s walking pace – and a 23 cu-ft cargo space that can carry up to 200 pounds. Adjustable shelving and lockable doors add extra flexibility as to what’s inside. BrightDrop envisages it being used in warehouses, to bring products to consumers’ front doors, and elsewhere; operators will even be able to synchronize multiple EP1 units together, guiding one and having the rest follow.

Both EV600 and EP1 will support real-time monitoring. Companies will be able to log in and see where the electric delivery van is located, for example, as well as its battery and charge status, whether any upcoming maintenance is likely to be required, push out OTA updates, and even deliver driver safety coaching and incident recording. For the EP1, it’ll be possible to check location and battery, push updates, and lock or unlock the cabinet doors.

It’s all been enough to catch the eye of FedEx, which has been testing out the EP1 in 2020. The pilot suggested that FedEx Express couriers could handle up to 25-percent more packages each day, with reports of less strain and loads being easier to maneuver. Another urban pilot will take place in 2021, and FedEx will get the first 500 units of EV600 at the end of the year. 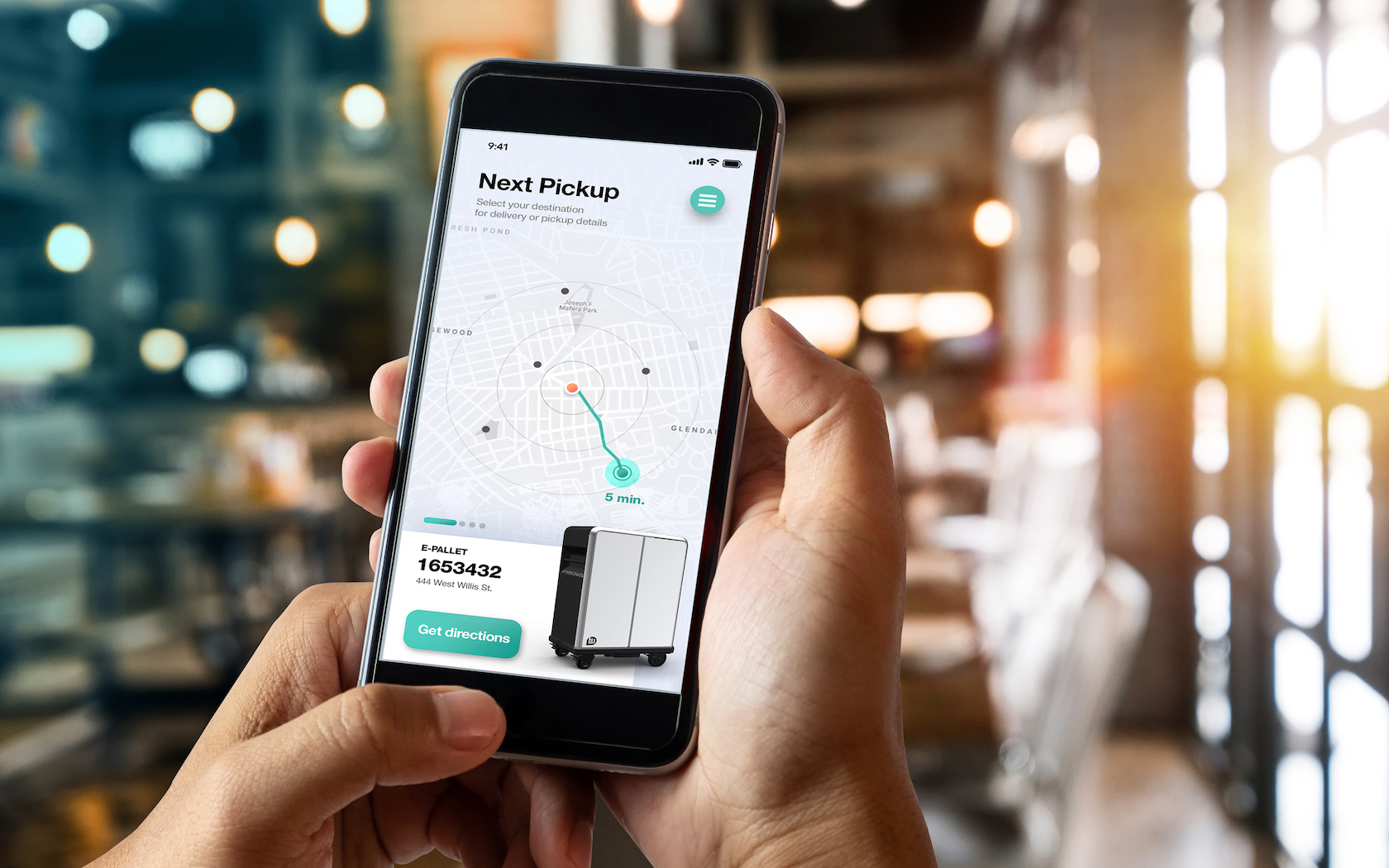 Broader availability for the electric van will begin in 2022 and, according to Pamela Fletcher, Vice President of Global Innovation at GM, new clients are already lining up. “Interest in these products have been tremendous,” she said, “and we have letters of intent signed from other customers.”

Initially, BrightDrop is targeting the US and Canada. Down the line, that could expand, and the startup also has some ideas for future products, too. A BrightDrop Medium Distance vehicle, for example, would be scaled for last-mile deliveries and slot in underneath the EV600. A Rapid Load Vehicle Concept could swallow up multiple EP1 pallets in one go, dramatically cutting the time required for loading and unloading. 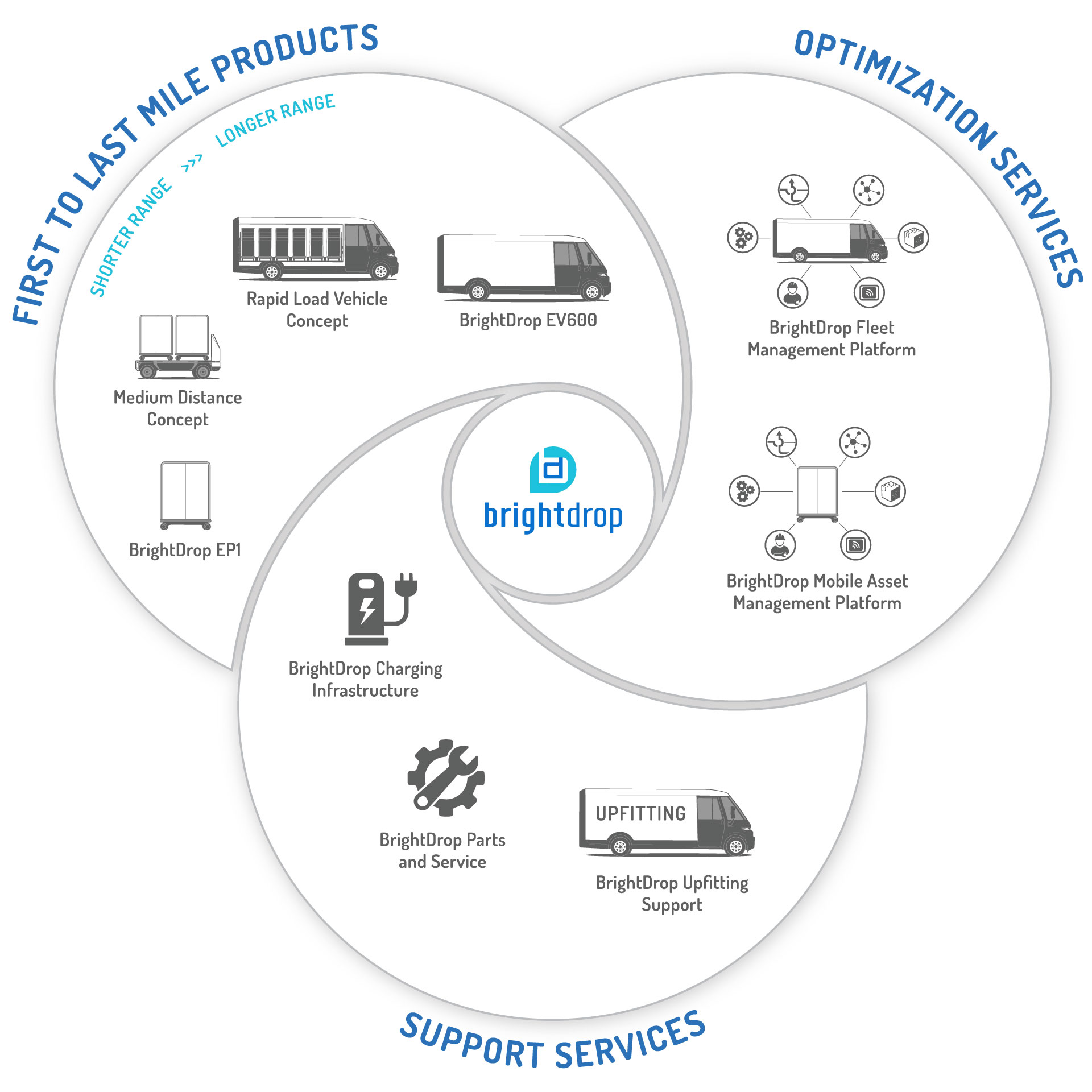 Before any of that has a chance to arrive, of course, customers will want to use EP1 with their own fleets. BrightDrop will offer a few routes to upfitting existing vans, working with providers depending on their needs. It’ll also help with installing charging infrastructure, and BrightDrop will have its own, independent customer support team and a separate dealer and service network from GM’s existing one.

In the future, more vehicles and potentially fewer drivers

That separation will include the EV600 itself. It’s exclusive to BrightDrop, beyond the Ultium architecture, and there won’t be a version of it launched under another GM brand’s nameplate, Fletcher says. Dealer and future product specifics will be shared later on, and BrightDrop – which will be led by new president and CEO Travis Katz – isn’t talking about how much contribution to GM’s bottom line is expected yet, either.

Still, Fletcher says, the van market generally is “worthy of us making significant investments,” and she expects the contribution to GM’s financials “will start very quickly.” 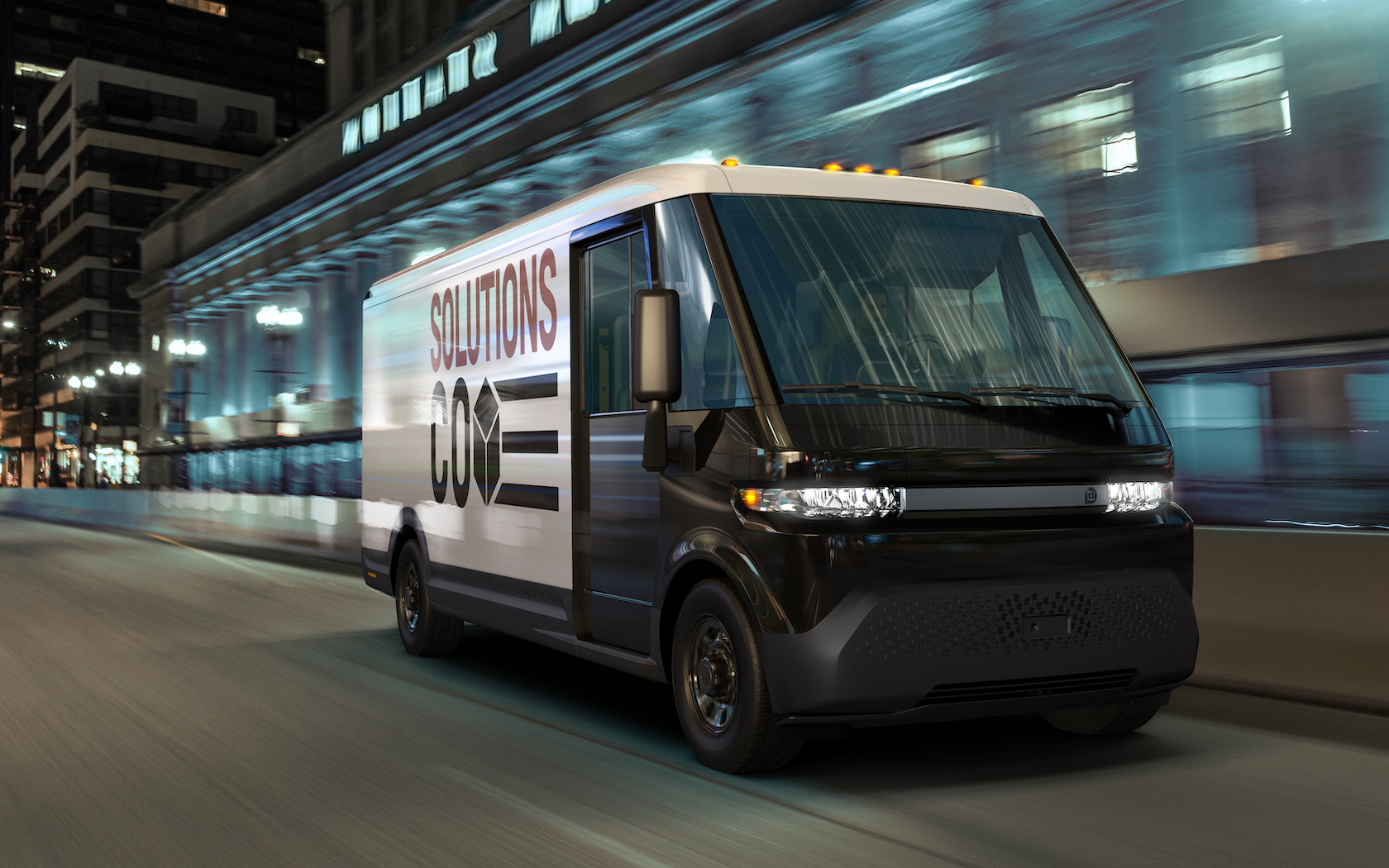 What is conspicuous by its presence right now, is a human driver. Although GM stablemate Cruise AV is working on autonomous vehicles, for the moment BrightDrop is counting on a physical person behind the wheel. “The technology roadmap for BrightDrop is long, we have a big vision,” Fletcher said, when asked about the potential for self-driving vans. “What we think is really important is that everything we show can literally be scaled in a big way today.”

BrightDrop won’t have the industry to itself, of course. Ford has already announced the 2022 E-Transit, an all-electric version of its best-selling cargo van, expected to go on sale in 2021. Rivian, meanwhile, is working on an electric van in its Amazon partnership, as is Bollinger, and only last month Canoo revealed its Multi-Purpose Delivery Vehicle which it expects to sell from 2022.