Ford has pulled the wraps off its latest all-electric vehicle, and the 2021 E-Transit is a big deal when it comes to zero-emissions. A plug-in version of the cargo van that’s already a best-seller around the world, it’s expected to deliver 126 miles of range when it goes on sale next year. While that might sound low in EV terms, Ford has an argument to back it up.

While range anxiety among individual drivers remains a headache, that’s primarily because most of us don’t actually have a realistic idea of how much we really drive each day. Fleets running existing Transit vans and other cargo products, however, have long been collecting data on how far they actually drive. 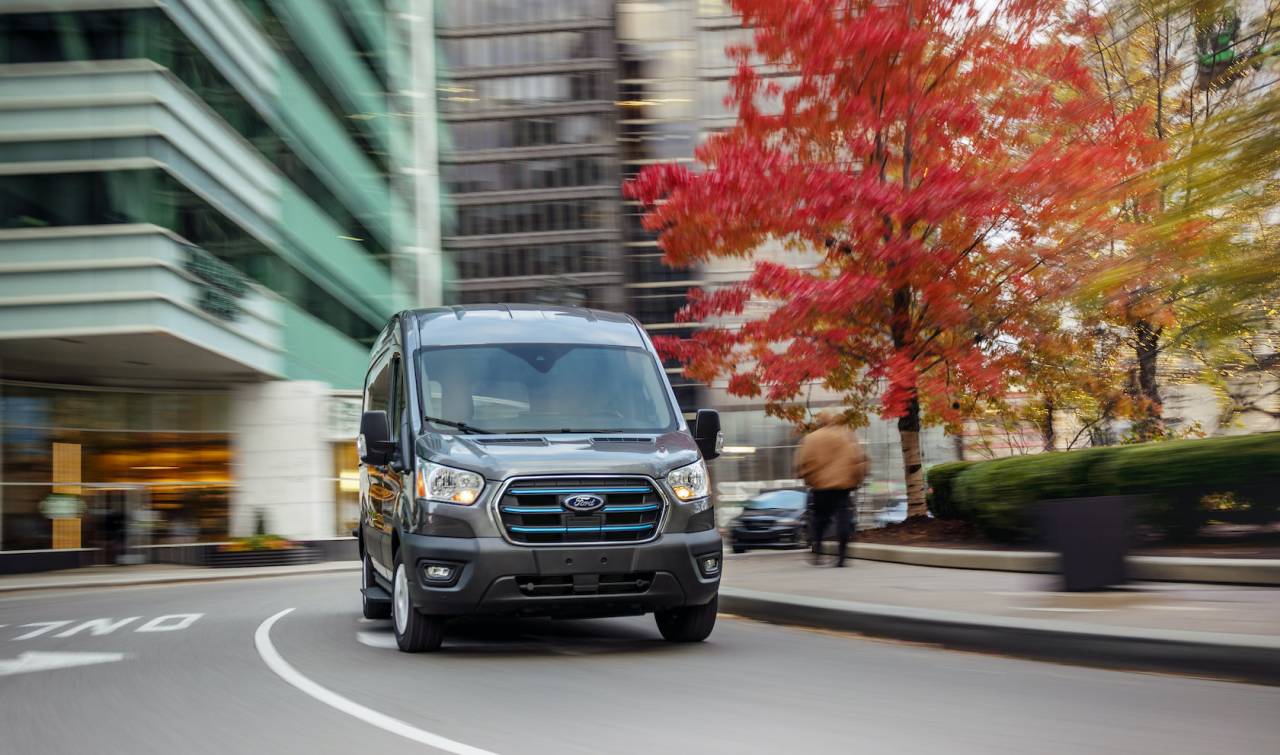 Ford says that gives it a 30 million mile log of customer telematics in order to crunch just what sort of realistic range the 2022 E-Transit needs to succeed. After all, packing in too much battery is arguably just as problematic as not giving the electric van enough, since that would add to weight and cost. The result is a 67 kWh battery which, Ford is estimating, should allow the low-roof cargo van E-Transit variant to drive 126 miles.

It’ll also have a starting price under $45,000 for fleet customers in the US. There’ll also be a high-roof, extended wheelbase variant of the van – Ford is yet to say how far it’s likely to drive on a full charge – which will offer up to 487.3 cubic feet of cargo capacity. In the US, there’ll be a maximum payload of 3,800 pounds, or up to 4,290 pounds for cutaway versions. 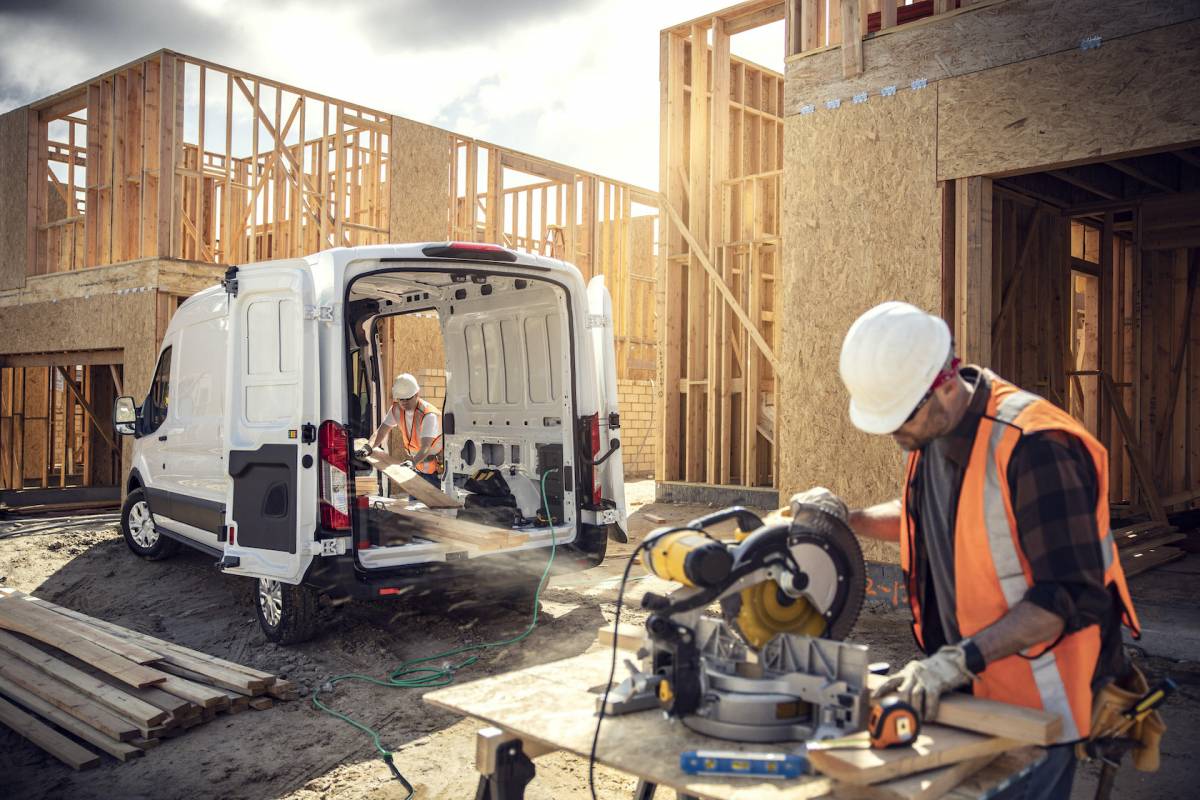 In total, there’ll be three roof heights and three body lengths on offer for the US, plus cargo, cutaway, and chassis cab versions of the E-Transit. All will be rear wheel drive, and Ford says it reworked that system – and the rear suspension, using a new, heavy-duty semi-trailing arm system – so that it could make space for the battery pack under the cargo bay floor, and improve driving dynamics.

Regardless of body style and size, the electric motor will be good for 266 horsepower (198 kW) and 317 lb-ft of torque. There’ll be AC and DC fast charging, with Ford bundling a 120/240V mobile charger for top-ups on the go; figure on an eight hour charge in the best case scenario there. However, with a 115 kW DC fast charger, you’ll add more like 30 miles of range in 10 minutes, or 45 miles in 15 minutes. 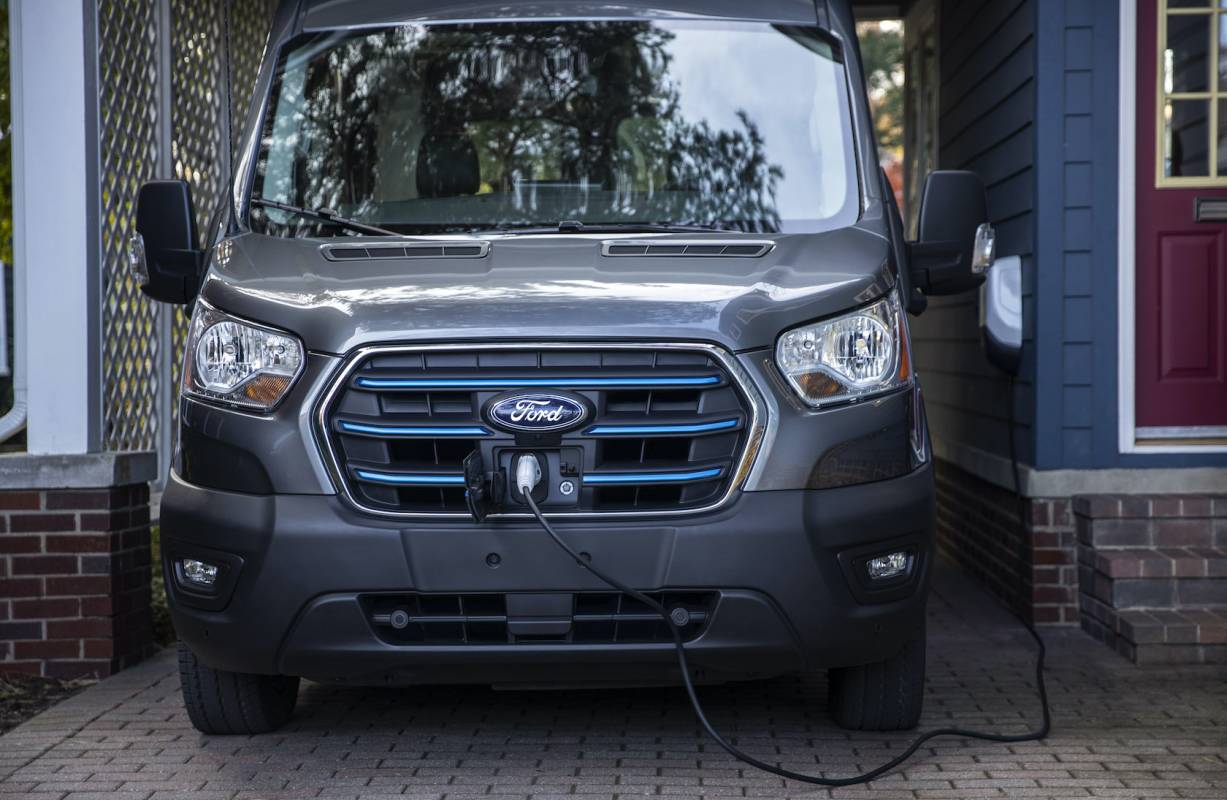 Like the electric F-150 that Ford is also working on – and announced just this week that it would be boosting production of, based on unexpectedly high interest – the battery will also offer up its charge in other ways. An optional Pro Power Onboard system will provide up to 2.4 kilowatts to run things like belt sanders, circular saws, and other job site equipment, effectively turning the E-Transit into a mobile generator. 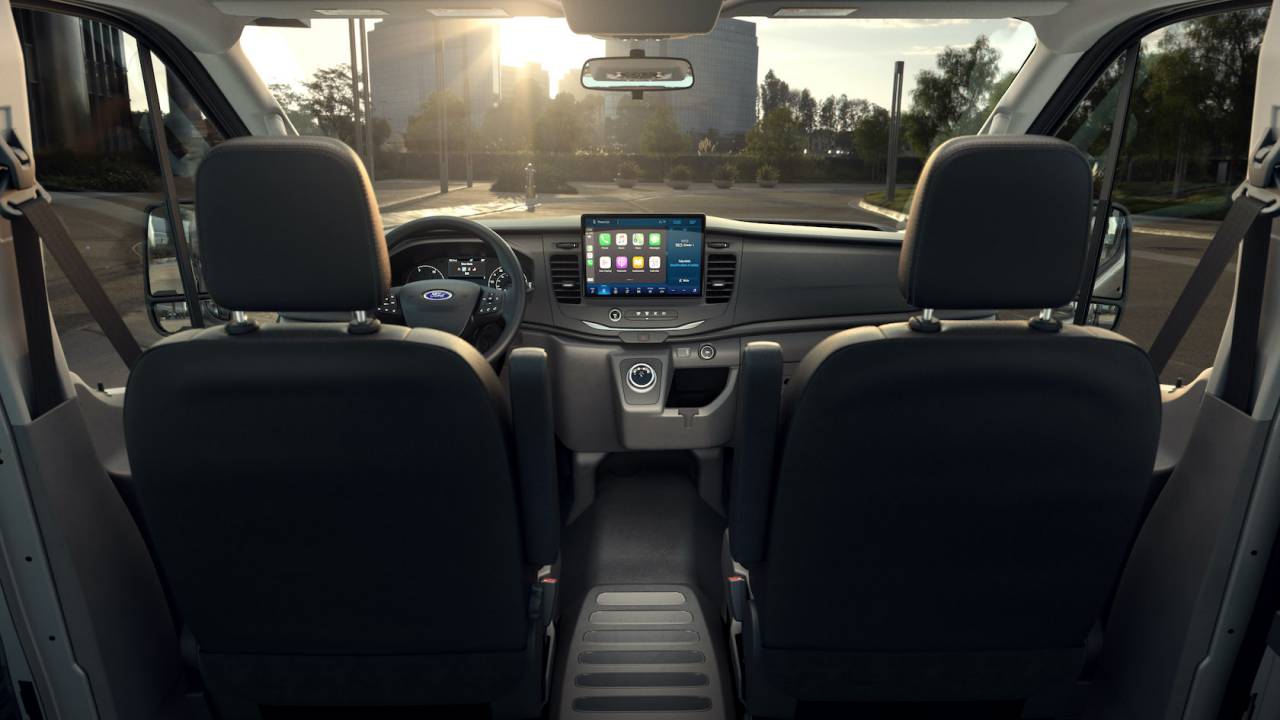 It’ll be controlled with the standard SYNC 4 infotainment system, and an embedded 4G LTE modem. That can be used for fleets to monitor the performance of the E-Transit vans in the wild, as well as do things like remote vehicle pre-conditioning, cloud-enhanced navigation, and improved voice recognition. Fleet managers will also be able to use the system to reimburse employees who charge the 2022 E-Transit at their home, since it’ll be able to report just how much electricity it required. 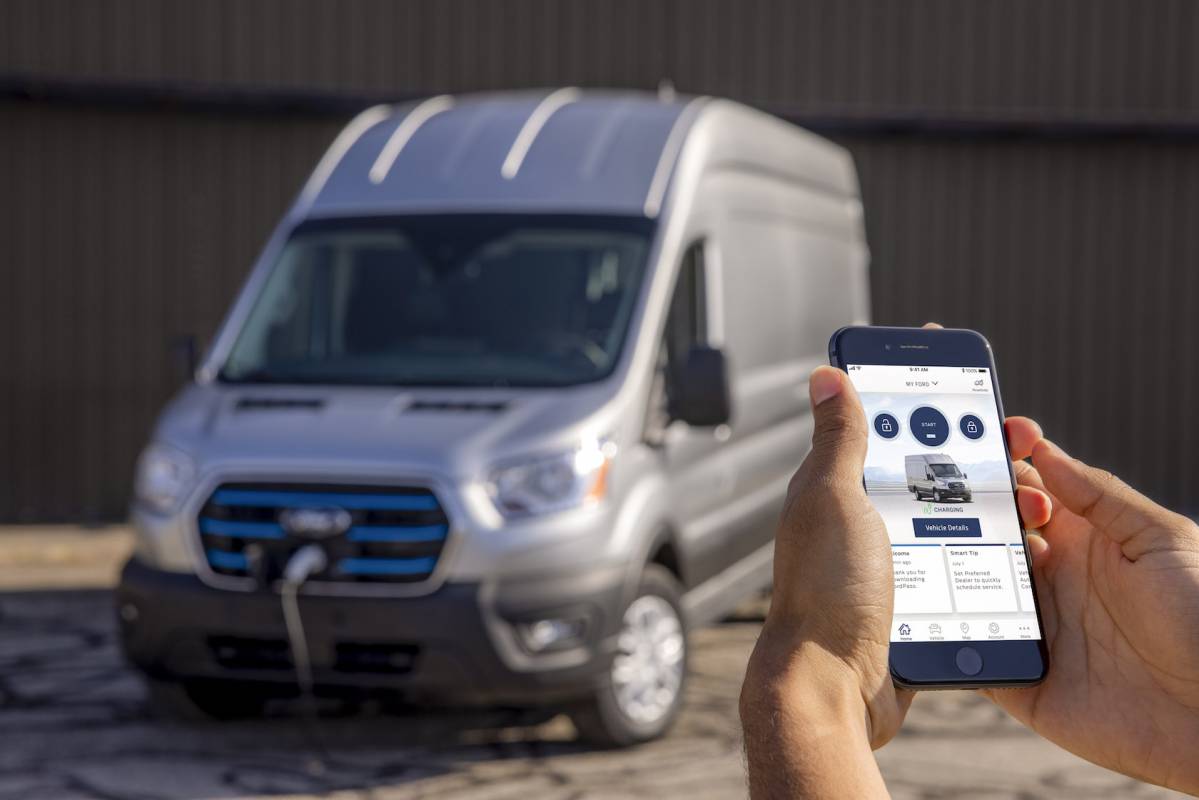 Ford Co-Pilot360 will be offered, with adaptive cruise control, speed sign recognition, and Intelligent Speed Assist. As standard, there’ll be lane-keeping assistance and pre-collision assistance, and automatic emergency braking. Blind spot warnings and assistance will be optional, as will a 360-degree camera and reverse braking assistance. 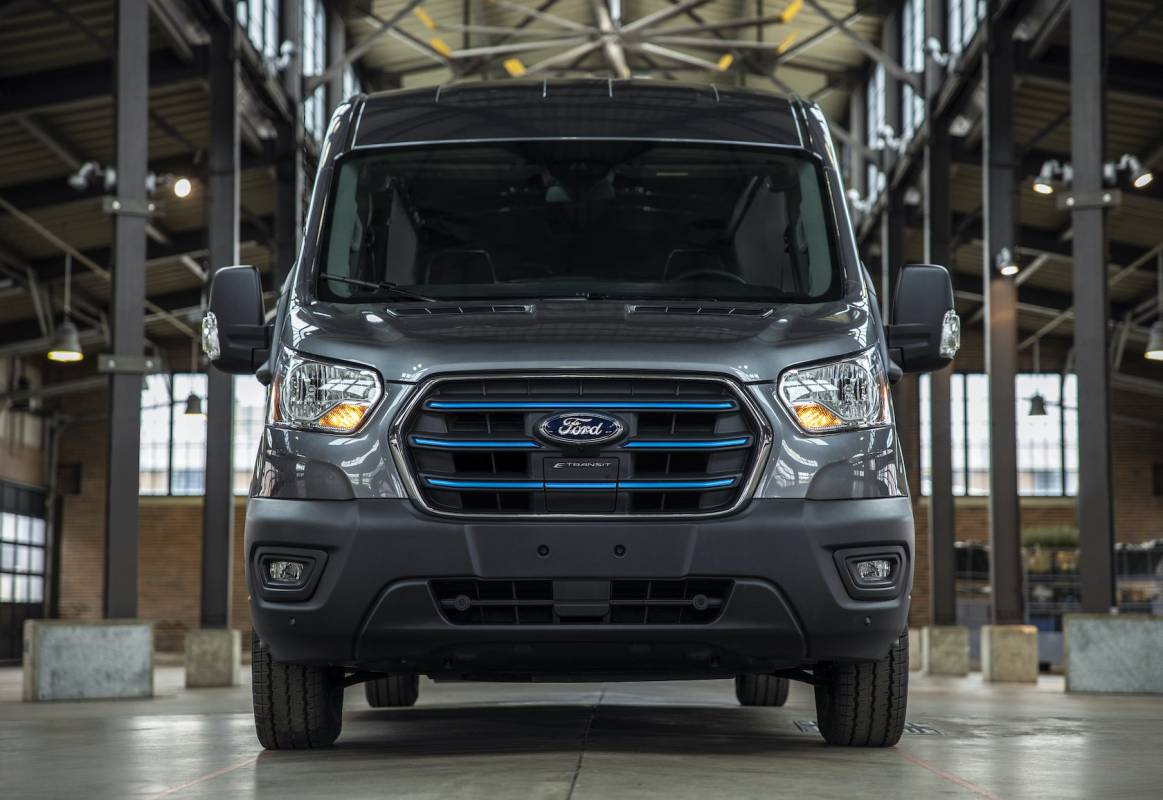 What may make the decision for fleets is Ford’s warranty. That’ll be eight years, 100,000 miles for the electric vehicle components, and given traditional EV drivetrains are less problematic for maintenance than their gas or diesel counterparts, that could help offset any price difference with the regular Transit which starts at $40,180 (plus destination) for the 2020 model year van. 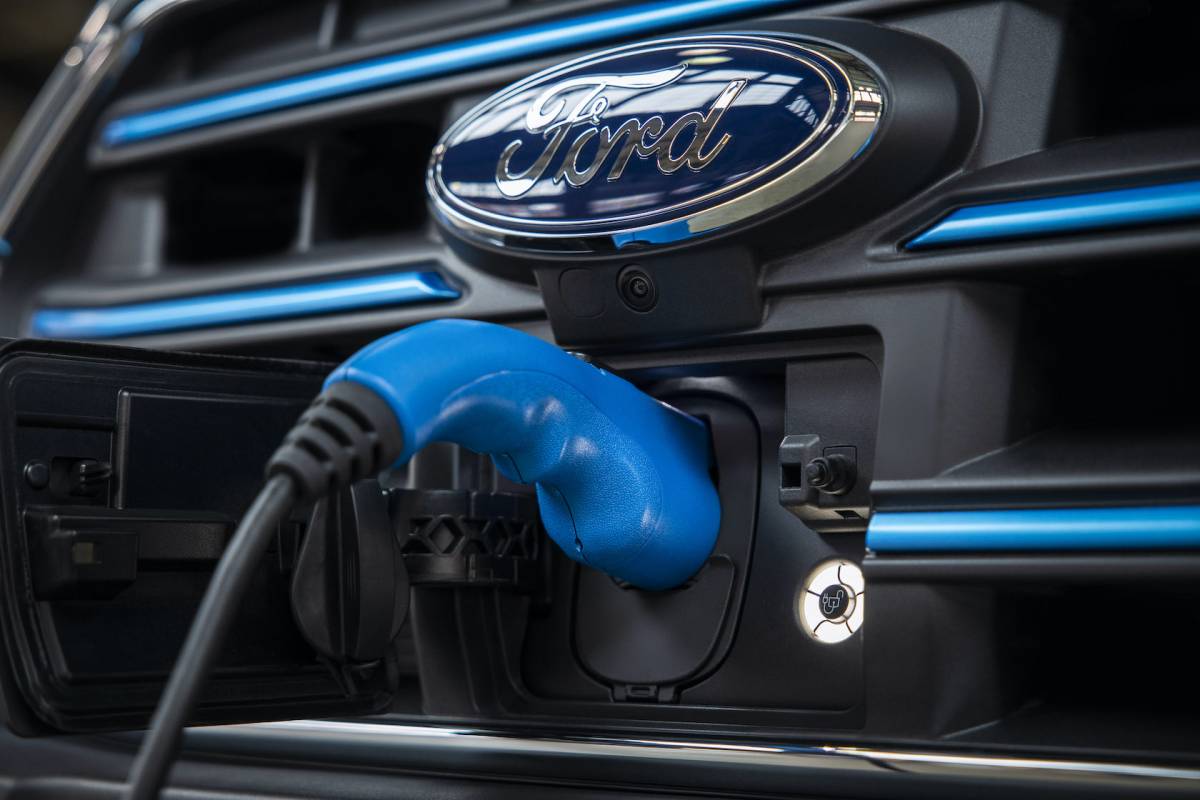 In the end, the 2022 E-Transit isn’t designed to be an electric cargo option to replace every other van out there. For urban deliveries, though, it’s a focused attempt to leverage Ford’s big brand, and maybe cut down on some city smog in the process. Sales will kick off at the end of 2021.