This week and throughout the next we’ll be continuing to explore the many facets of the Galaxy Nexus both inside and out, this newest post showing off the power of the device running this vanilla version of Ice Cream Sandwich with some benchmark tests. You’ll see CF-Bench, Linpack, Quadrant Advanced, and SunSpider (web browser test). Each of the tests run in their own app from the market while SunSpider runs in the native WebKit web browser that comes with the device. Will this newest Samsung device outdo the Galaxy S II, or will it prove to be less of a powerhouse than Samsung’s hottest selling space-themed handset?

The Samsung Galaxy Nexus runs a dual-core processor from Texas Instruments, the OMAP4, clocked at 1.2GHz for each CPU core right out of the box. This device is running Android 4.0.1 Ice Cream Sandwich in as vanilla (aka untouched by Samsung or any carriers for the interface) as possible, this showing off Google’s vision for the most advanced mobile operating system on the planet. What you’ll find in the benchmarks is that while this device may be the hottest handset on the market right this second, it’s not necessarily the best at taking tests.

NOTE: the image above is taken from our review of the Philips Fidelio AS851 working with the Galaxy Nexus right out of the box, the both of them. 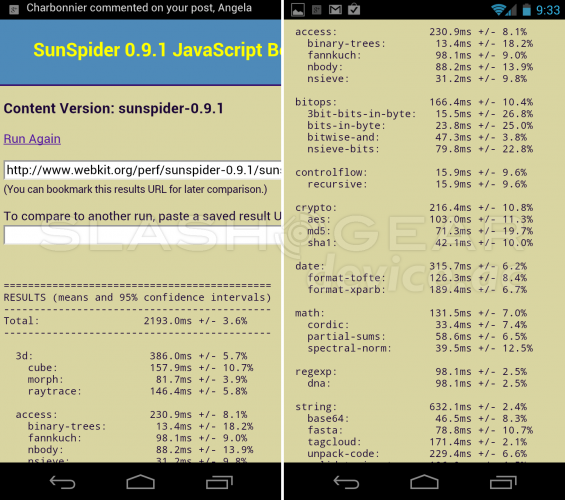 The scores you see here don’t necessarily mean that the device is more or less powerful than any other in any more than a very general way, but you can get a basic idea of what its capable of by comparing the numbers to those we’ve collected in each of our reviewed devices found in the upper right-hand column of your browser. You can instantly see how well this device does against the common Samsung Galaxy S II score in CF-Bench, noting that while Java and Overall scores beat out the GSII by a narrow margin, the Native score remains on top for the Galaxy device. What this tells us is that the two devices are surprisingly similar in their ability to take this same test even though they use processors from different manufacturers. 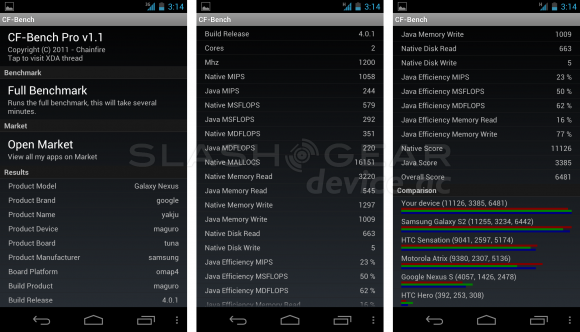 The rest of the tests, without getting in to too much detail, basically put this device and its built-in web browser up there with the top tier of mobile devices out today without placing it 100% clearly at the very top. That spot is still reserved for the upcoming ASUS Eee Pad Transformer PRIME with the first quad-core mobile processor on the planet: the NVIDIA Tegra 3. We’ll see how that continues to add up against the Galaxy Nexus SOON we hope!

Also be sure to check out the rest of our ongoing hands-on series with the Galaxy Nexus as well as Ice Cream Sandwich to round out your tasty day, and be sure to ask us any questions you’ve got on either one!