Digg Reader, the company’s attempt to replace ill-fated Google Reader, has made its jump to mobile, with an update of the Digg iOS app introducing RSS support. Available in versions for iPhone and iPad, the new app – v5.0 – not only pulls in the feeds users have set up or OPML imported in the browser-based version launched a week ago, but in time will integrate them with other news pulled from social feeds.

A “Digg” button in the reader view allows popular articles to quickly be fed into the main Digg feed, as well as helping to shape the “Popular Sort” feature. The company aims to use that evolving data to in effect offer customized RSS without the requirement that users sign up to multiple feeds in the first place, offering them instead a curated selection based on their interests.

Most reader services use some sort of preconfigured bundles of sites to get new users started. However, they’re generally organized around relatively generic themes, such as sport, technology, or design, rather than being shaped according to social circles. 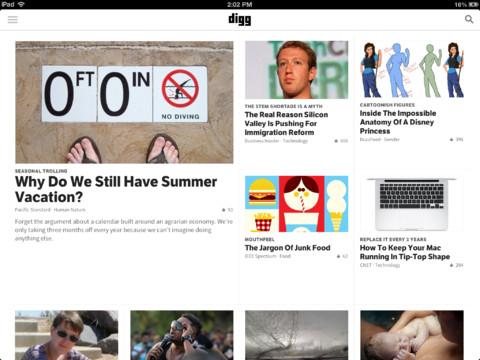 Those features will have to wait a little, however, as Digg is still in the early stages of development of Digg Reader. The company raced to get its product on the market before Google shuts down Google Reader, which is expected to happen next week.

Also in the pipeline is an Android app, which Digg says should hit the Google Play store before the end of July. There’ll also be more sharing options, including Google+ for social, popular microblogging platforms like Tumblr, and cloud storage services like Evernote and Dropbox.

The company isn’t the only one trying to grab a slice of the reader market Google is vacating. AOL Reader launched in beta earlier this week, while Feedly has been building out its alternative.

Meanwhile, Facebook is said to be working on a news-centric project of its own, believed to be internally codenamed Reader, though various leaks have disagreed on the service’s exact functionality. However, it’s believed to be broadly a social-powered news consumption app, populated with curated content from Facebook friends and similar users, and which the social network hopes will promote longer periods of mobile use.