Remember when Google announced that they’d be shutting down their Reader service? Of course, who can forget? Many users were upset by the news, and while Google Reader isn’t shutting down for another three months, users are already finding alternatives, Feedly being one of the most popular, with over three million users switching over to Feedly from Google Reader.

In response to the massive spike in users, Feedly has updated its mobile app for both iOS and Android. The user interface received a slight update, making swiping and navigating through stories much more easier this time around. The app also has a new discovery algorithm that takes popular stories for the day and moves them to the top of the list. 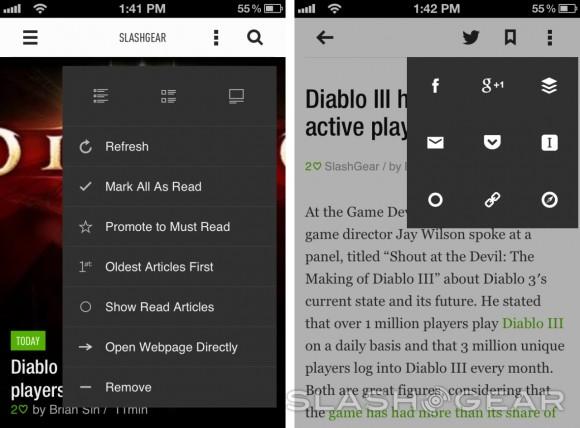 They’ve also made searching and sharing a lot quicker and easier, as well. Searching for a website to add to your feed is amazingly fast, and I was extremely shocked at how quick it can be to search for a website. Sharing an article is also dead easy, thanks to a new drop-down menu that lets you share something to your favorite social network.

Feedly was one of our suggestions in our post about five alternatives to Google Reader, and while it certainly doesn’t have the simplicity of Google Reader, the design and execution of Feedly is rather good. It’s said that Digg will be building its own alternative and releasing it at some point, which means that Feedly could have some serious competition sooner or later.