In the following hands-on blood-spewing experience with this next-generation first person shooter from the same folks that brought you Shadowgun, you’ll see zombies. You’ll see so many zombies that your head will explode. We’ll be showing off this game Dead Trigger THD, developed by Madfinger Games in collaboration with NVIDIA for their Tegra 3 quad-core processor, on the newest device to utilize that architecture, the Google Nexus 7 tablet.

If you’ve played Shadowgun, you’ll feel right at home with Dead Trigger. You’ve got essentially the same controls, the graphics are extremely similar, and the amount of fun you’ll have here is at least as high as it’s been in that non-zombie game. Here you’ll have a host of new weapons, a much more terrifying environment, and zombies. Understand this if you understand nothing else: there’s lots of zombies in this game. Lots of once-dead people who are now out to eat your brains.

You’ll see water and fluid effects like you’ll find nowhere else, similar to what’s been shown in the THD (Tegra High-Definition) version of Shadowgun. You’ll also see variable lighting as well as volumetric fog and some excellent rag doll physics all around. And lots and lots of blood. 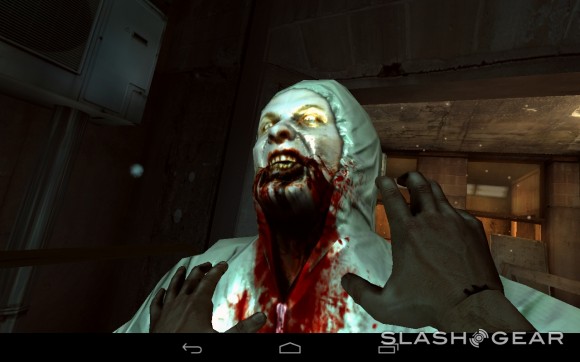 NOTE: also be sure to have a peek at the tablet in this post in our Google Nexus 7 Review. Then have a peek at this game in the TegraZone and/or the Google Play app store right this second for the impossibly inexpensive price of $0.99 USD. It’s impossible not to grab. Grab it right now.