From the developers who brought you the epic Shadowgun THD first-person shooter somces Dead Trigger, a zombie massacre that’s not to be missed. This game will be perfect for those of you prepared in advance with HDMI-toting Tegra 3 tablets and wireless gaming controllers as this game was meant for the big screen as much as it was meant for the tiny one. PC-quality gaming and water effects mixed with lots and lots of blood, coming your way soon!

The folks at NVIDIA have teamed up with Madfinger Games to develop a game that’s certainly not a sequal to Shadowgun, but I’ll be darned if it’s not in the same universe. You’ve got controls that are essentially identical, movement appears very similar, and many of the same technologies have been used to bring this next-level game to light.

Ragdoll physics, for example, will be implemented here so that your device can make full use of your SoC, with real-time rendering of objects right in front of your eyes. If you shoot a zombie in the face on the right side of its body, it’ll fly left. If you shoot the next zombie in the knee cap, it’ll fall in a completely different manner than the first.

You’ve got volumetric fog, variable lighting, and again, water and fluid effects that make the whole game seem that much more visually intense.

Have a peek at the trailer above and prepare for the release of this game very, very soon. Meanwhile check out the timeline posted below for a selection of other Tegra-enhanced choice games for Android. 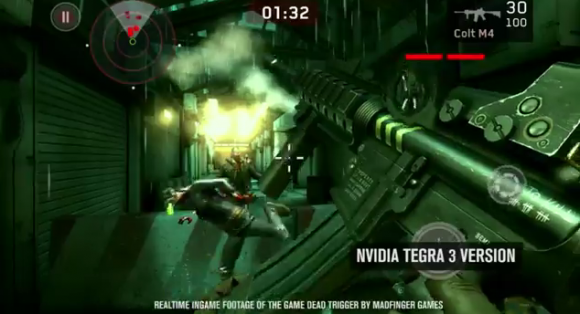