As the AT&T iteration of the Samsung Galaxy Mega 6.3 hits the market, there’s a surprisingly accepting atmosphere for devices with displays of all sizes. Back in 2011 when the original Samsung Galaxy Note was introduced, it was considered daring – a device with a 5.3-inch display? That was massive! Now we’ve got the Samsung Galaxy Note II with a 5.55-inch display and Samsung continuing their “one of every size” method of finding the ideal form for devices – a method they continue to work with in the tablet universe.

This device takes the Samsung Galaxy S 4 and blows it up to a monstrous size. While the Samsung Galaxy Note III hasn’t quite been revealed (we’re expecting it to appear in early September), this Galaxy Mega device is more akin to a larger “S” series device simply because, without the pen, a Note just isn’t a Note. That said, the Galaxy Mega may look like a giant Galaxy S 4, but it’s not quite as powerful – nor nearly as sharp. 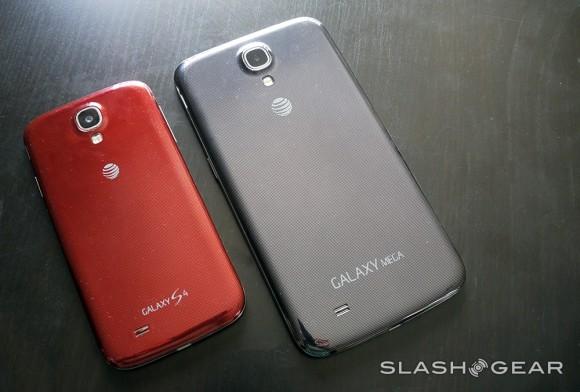 If you’re used to the Samsung Galaxy S 4’s display, you’re going to have a tough time getting used to the sharpness (or relative lack thereof) of the display on the Galaxy Mega 6.3 – the same can be said of the Galaxy Note II, but if you’re transferring from the Note to the Mega, the transition will be slightly easier. Though then you’d be dropping the S Pen. 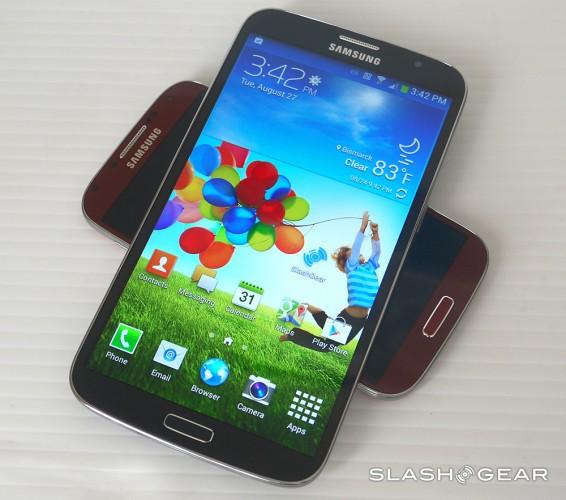 This device works with a dual-core Qualcomm Snapdragon 400 processor clocked at 1.7GHz paired with 1.5GB of RAM. That’s the sort of setup we’d expect from a much smaller device, but to our surprise, this SoC has done the work we’ve needed it to on a daily basis with ease, especially considering the massiveness of the display. Benchmarks don’t support this case, of course, but again – when you’ve got a display this massive, you’ve got to consider how much harder the processor has to work to achieve the same results.

What this device will be great for is watching movies, showing off photos and videos to your friends and family, and general entertainment purposes all around. What this device has been rumored to have done is to prove to Samsung that they don’t necessarily need to continue ramping up the size of the Galaxy Note series to keep ahead of the competition – the competition being devices like the LG Optimus G Pro (also carried by AT&T right this minute, mind you). 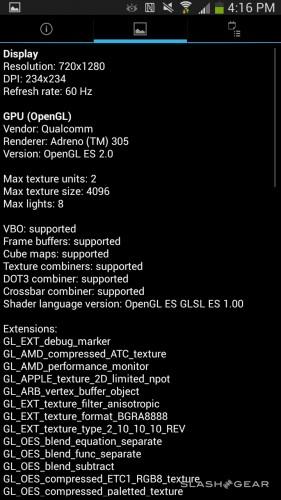 Unless you’re purchasing a device not to do battle with the rest of the smartphones on the market today, but to satisfy your own personal wants and needs. In that case, the Galaxy Mega 6.3 offers a bunch of features you’ll be glad to have if you’re just aiming for the abilities of the Galaxy S 4 with a much more massive screen for your gigantic palm. 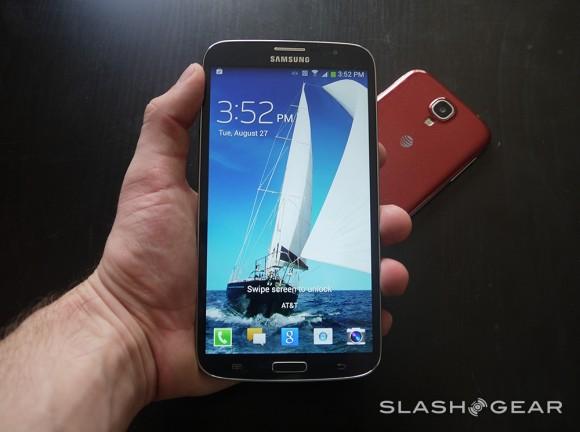 This device works with Bluetooth 4.0, NFC, 5GHz Wi-fi, 3G and 4G connectivity – and it’s a world phone. The Samsung Galaxy Mega 6.3 works with Android 4.2 Jelly Bean right out of the box and you’ve got both Air View and Smart Remote abilities due to this machine’s set of sensors and IR-blaster up top (that’s infra-red, if you did not know – able to control your television, even if it’s not “smart” as such.) 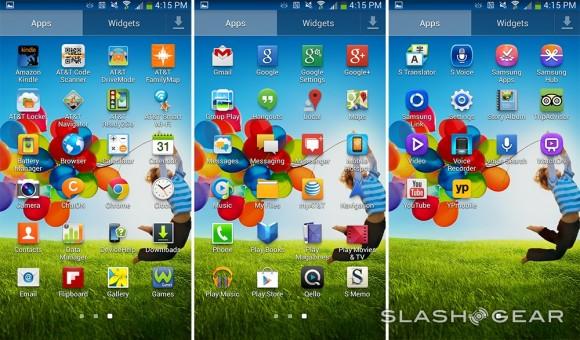 There’s also an Easy Mode included with this device that makes its massiveness even more helpful than before to those with beastly hands. Icons are twice as big and only the most essential abilities are presented – this might even be the most ideal way for grandma to get ahold of a device she can see, finally! 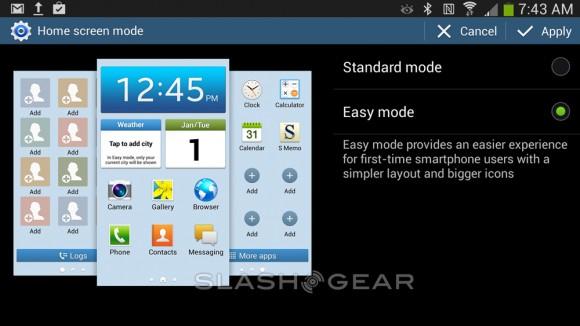 Group Play is included on this device to allow you to converse with the rest of your current-gen Samsung devices. This Group Play app allows users to view the same content on multiple smartphone and/or tablet devices at the same time in an interactive fashion – this works with documents, photos, and videos alike. The most recent version of Group Play also allows for multiple players to join in on the same optimized video game and to share music as well – all within the same local wireless network.

Samsung Link allows you to connect your devices together with your Samsung account, allowing extra-simple sharing of media between Samsung devices – that’s Samsung notebooks or desktop computers, smartphones, tablets, and smart TVs. The Samsung WatchON app allows you to control devices with infra-red – that’s the standard technology included in your remote control for your TV – at the same time you connect to and browse local network television programming. 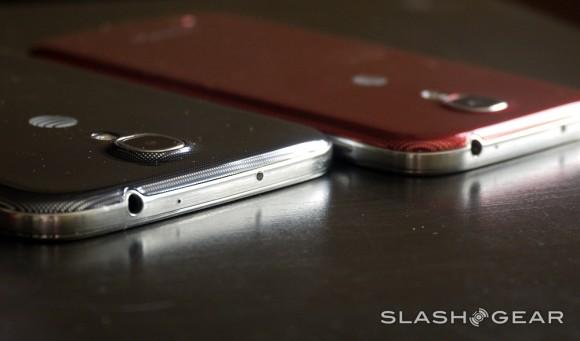 Above you’ll see both the Samsung Galaxy Mega 6.3 and the Galaxy S 4 with their IR-blasters up top – that’s the small circle on the top edge of the phone.

S Memo is also here as the single app to have found its way through a collection of Samsung devices since birth with the Samsung Galaxy Note series. You don’t need an S Pen to do your work and create fine digital artworks here, S Memo is just an advanced drawing and note-taking environment disguised as a simple doodle app – don’t be fooled.

The camera on this device is quite similar to that of the Samsung Galaxy Note II, working with 8-megapixels of power on the back with a single LED flash, autofocus, and the ability to capture 1080p video (which is always strange with a device that can only play back 720p in the end). The front-facing camera is also similar to that of the Galaxy Note II with 1.9 megapixels, though the both of them do benefit from the enhanced photography app brought on by the Samsung Galaxy Camera wave of devices. 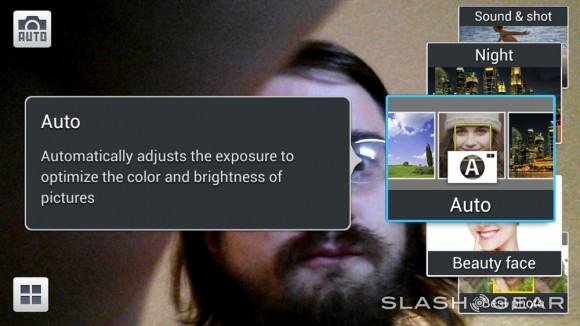 Here you’ve got Auto mode, Night, Sound & Shot (creating a strange single-frame image with sound), Best Face – taking a series and letting you select, and Continuous Shot – that’s rapid fire. Best Photo is another effect similar to Best Face, allowing you to keep the whole photo in this case rather than just selecting which face of a human you’d like to keep. Beauty Face remains creepy, suggesting that “enhanced” facial features are something you’d like for your selfies.

NOTE: the photo of the underside of a couple of paintings and a ceiling was taken with the front-facing camera – it’s OK, but nothing to write home about.

Have a peek at photo and video samples here and let us know if you’re finding the quality to be significantly different from that of the Samsung Galaxy Note II. At the moment it would very much appear that the two devices use quite similar – if not identical – hardware to snap back-facing photos and video.

Meanwhile the device has proven to serve the same quality voice calls and audio brought on by the Samsung Galaxy S 4, suggesting the company went with something similar for microphone and speaker technology on both ends. In other words: expect top-quality sound both to and from this device when making and receiving calls.

There’s a 3200 mAh lithium ion battery in this device for a reason. By the standards of any other smartphone, 3200 mAh is absurdly large, but here with the Galaxy Mega 6.3, it serves to keep the biggest battery drainer in any smart device (its display) from ending the up-time of the device in no time flat. As there is a 6.3-inch display on this device, it is fairly easy to drain the battery if you’re aiming to do so. 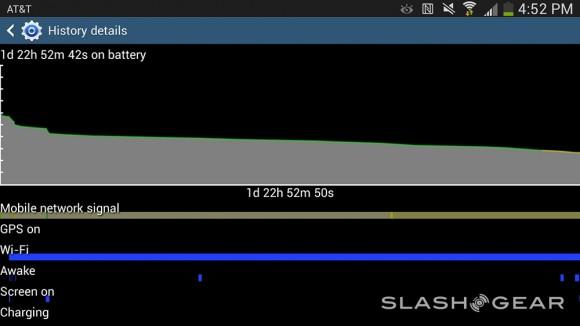 On the other hand, if you’re smart about keeping your display away from the highest brightness point – automatic brightness works well – you’ll have enough battery life to last you through the day. Standby time in particular is spectacular, as it has been with the past couple of generations in Qualcomm Snapdragon SoC architecture in smart devices of all kinds. Don’t expect the Galaxy Mega to outlast the Galaxy S 4, but without blasting your display all day long, you’ll have plenty of juice to work with.

The Samsung Galaxy Note 6.3 is not a tablet disguised as a smartphone, no matter how much it would appear to be one. Instead you’ve got a massive handset made for those users that have out-of-the-ordinary needs. Perhaps you’re professional basketball player that’s twice the size of the average human. Maybe you’re in need of a large display to play movies on your frequent airplane trips and the Galaxy Note II just isn’t cutting it.

Maybe you’ve collected the rest of the innumerable Samsung smart devices on the market and you gotta catch em all – for you, the Galaxy Mega 6.3 will be a must-have. 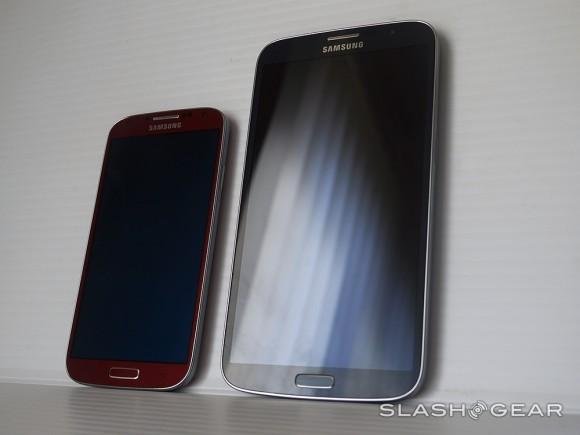 Of course then you’ll have to recognize that there’s also a Samsung Galaxy Mega 5.8 on the market (only internationally at the moment) that you’ll have to pick up as well. May the collector gods have mercy on your soul.

Meanwhile for those just looking at the AT&T collection of smartphones deciding which one is best: there’s really nothing that matches the Galaxy Mega 6.3 with this carrier at the moment, nothing save the Galaxy Note II – and eventually the Galaxy Note III, which we’re expecting will take the whole family for lunch with power that at least matches that of the Galaxy S 4 – with a display that’s not quite as sharp. So take a peek – you’ve got more options than you’ll know what to do with!