We’ve been keeping a close eye on the Apple TV jailbreak situation, and with one reportedly functioning exploit based on SHAtter already tipped to be working on the set-top box, it was only a matter of time until it fell to the hacker’s attempts.  The iPhone Dev Team wrapped SHAtter up in a custom build of their PwnageTool – apparently not quite ready for public release, sadly – and managed to convince the Apple TV to load a pre-jailbroken IPSW. 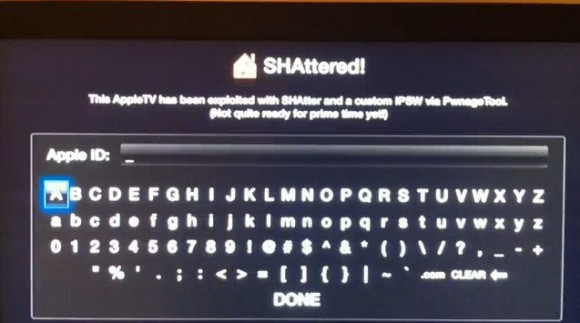 The end result is an Apple TV onto which you could load third-party apps; the Dev Team says there’s nothing on the box in its stock state apart from Lowtide.app – which we’ve already seen running on an iPod touch – and with no official App Store access that’s not going to change anytime soon.  Still, early rumors suggested Apple were planning to bring the App Store across at some point so, if jailbreaking doesn’t appeal, that doesn’t necessarily mean you’ll never be able to load new software onto your Apple TV.