AMD Big Navi is here with the AMD Radeon RX 6000 series graphics cards, and AMD’s got the benchmarks to prove it. Of course we wouldn’t want to claim the end-all, be-all accuracy of the company reporting said benchmarks since they’ve got a LOT to gain from said benchmarks being favorable to their cards… but the results are telling, just the same. Included in the mix today are the AMD Radeon RX 6800, 6800 XT, and 6900 XT, with details on how they stack up VS NVIDIA’s RTX 3000 GPU lineup.

AMD Radeon RX 6800 is the baseline card in this collection. AMD’s benchmarks compare the card to the NVIDIA RTX 2080 Ti, a card released in late 2019. In this comparison of games like Battlefield V, Doom Eternal, and Resident Evil 3, the RX 6800 has anywhere from an insignificant advantage over the RTX 2080 Ti, to an FPS advantage over said NVIDIA card that’s worth noting. This first set of benchmarks works with 4K60 settings and what appears to be MaxQ across the board. 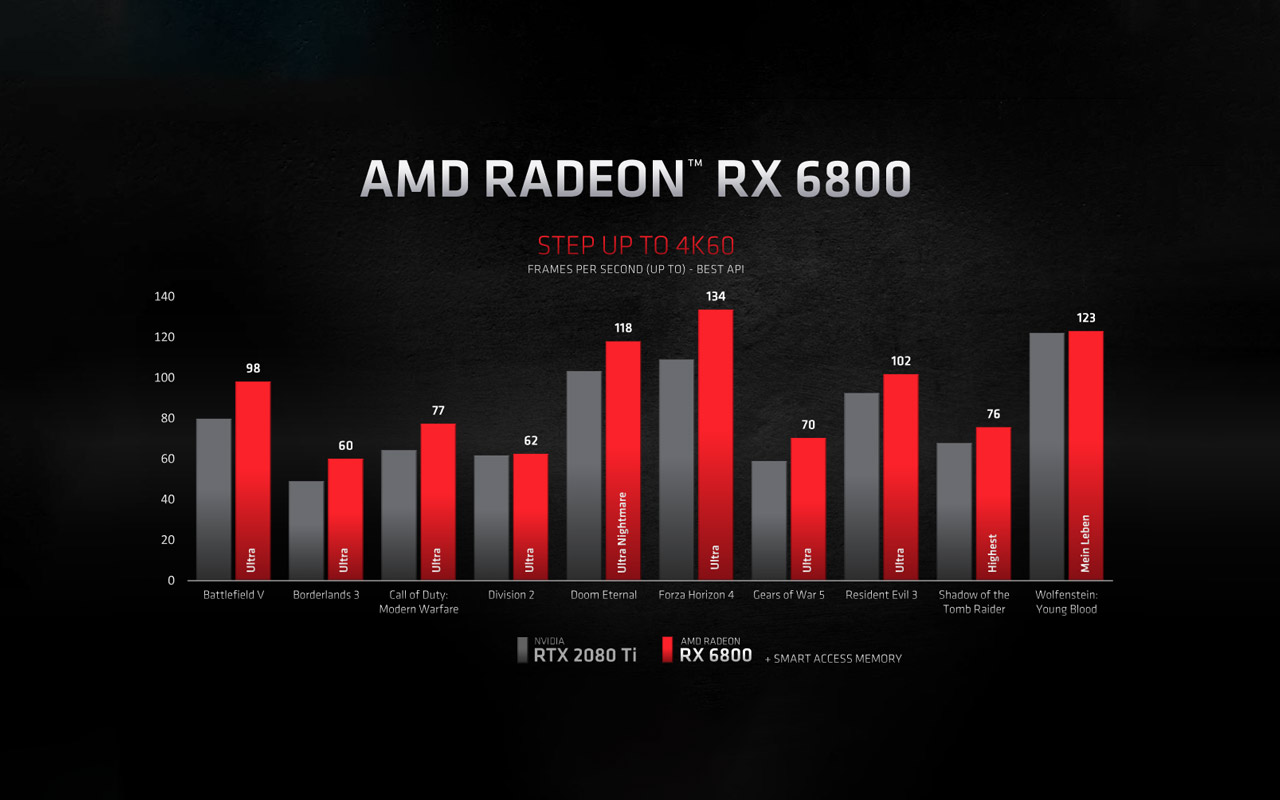 AMD also pitted their RX 6800 against the RTX 2080 Ti with MaxQ on all games with a resolution of 1440p. It’s here that the Radeon RX 6800 appears to pull ahead by a significant margin in every game. 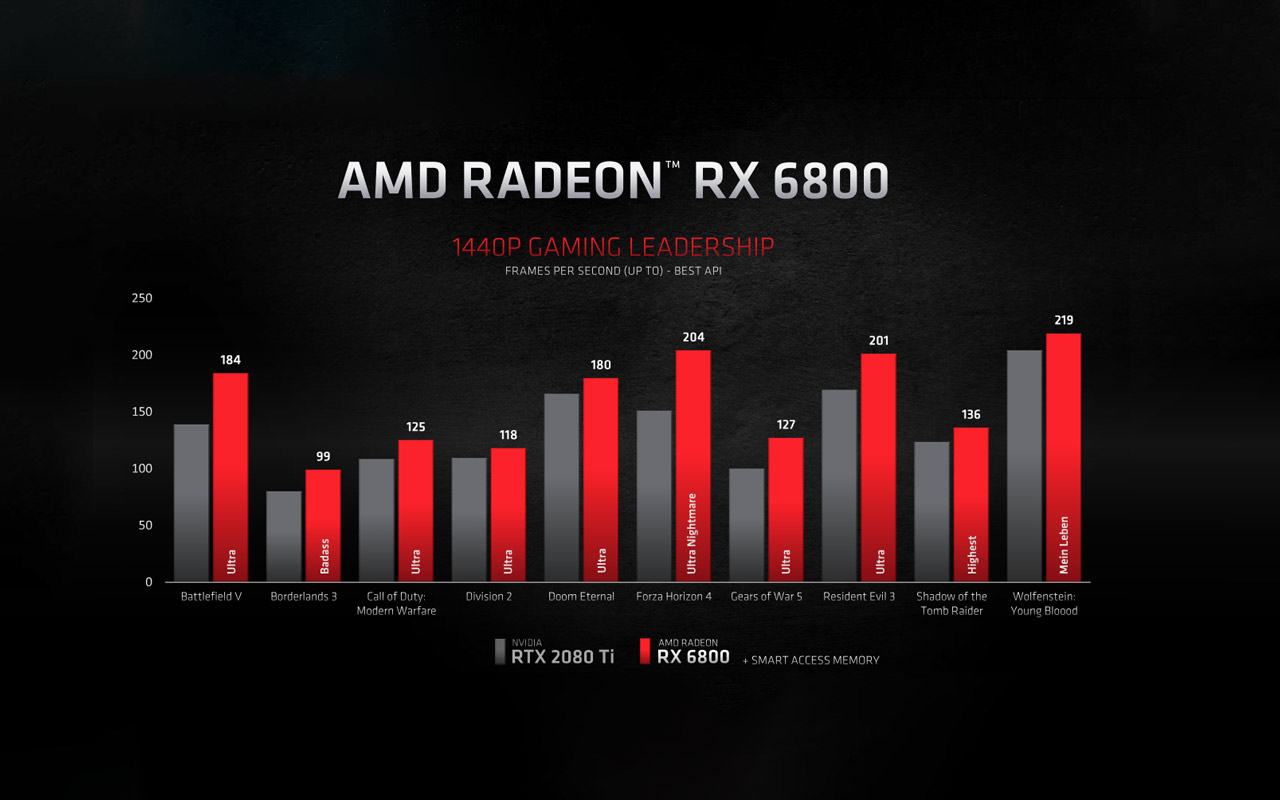 You should note, at this point, that AMD (like most companies in this position) employs visual tactics in their presentation of benchmarks that make their product appear as impressively better than the competition as possible. They’ve put their benchmarks in red, while NVIDIA’s are gray. They’ve given their benchmarks actual FPS results, while NVIDIA’s rely entirely on the general scale of the chart.

For the AMD Radeon RX 6900 XT, AMD shows the same games as appear in the benchmarks above – but here they’re facing off against NVIDIA’s newer RTX 3090. This set of benchmarks is interesting because it does not claim that RX 6900 XT is the better card outright. 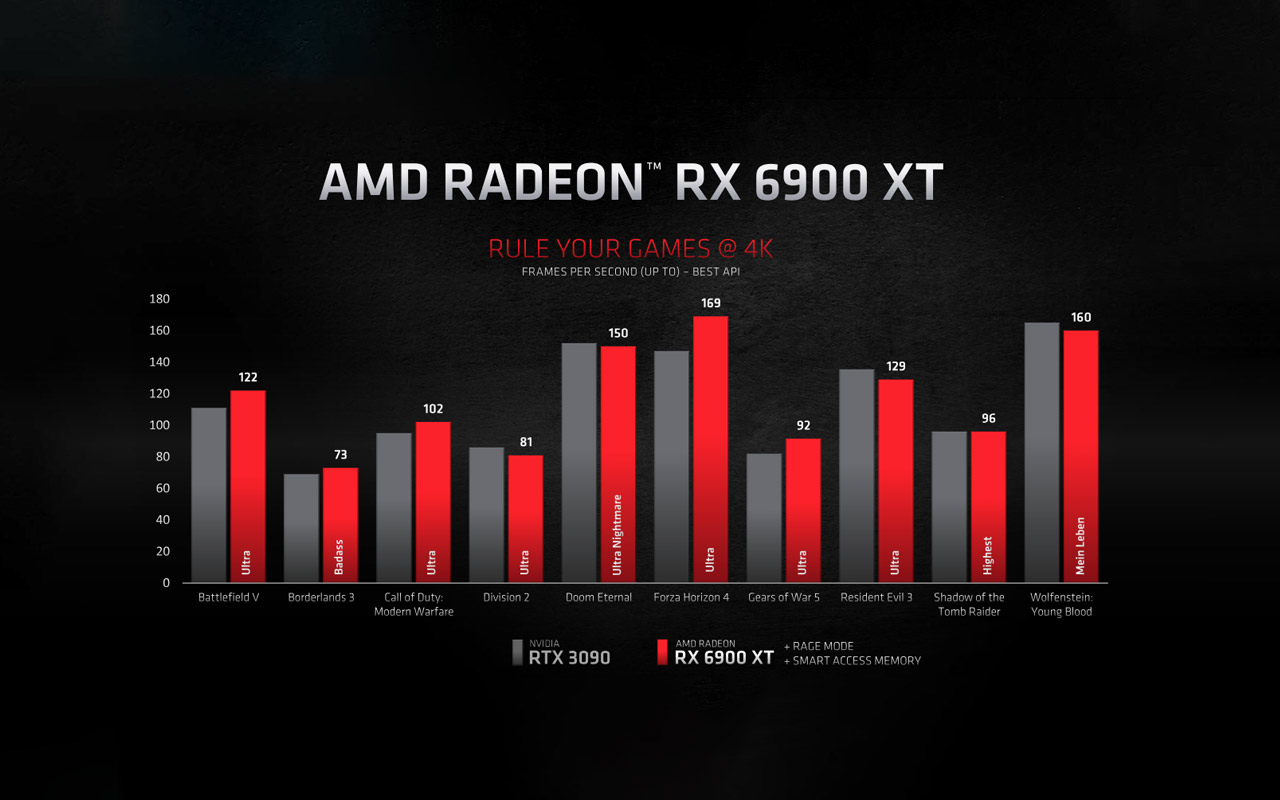 AMD shows here that their RX 6900 XT out-performs the RTX 3090 in five of the 10 games tested. They appear to claim that the cards match on performance when testing Shadow of the Tomb Raider, but that AMD’s card doesn’t quite meet the GeForce RTX 3090 in Wolfenstein: Young Blood, Resident Evil 3, Doom Eternal, and Division 2.

The key here is the cost. AMD’s made the case that these cards are shockingly similar in performance (at least when benchmarked from an FPS point of view), but that they’re able to offer the hardware for a significantly lower price. Where the NVIDIA GeForce RTX 3090 has a price around $1500, the AMD Radeon RX 6900 XT has a suggested retail price of approximately $1000.

Above you’ll also see the presentation from AMD of their Big Navi cards in full effect. Our first details post should give you some idea of what AMD’s claiming, here. Processing power with the potential for availability and pricing that could beat NVIDIA. Time for some healthy competition!