The NVIDIA GeForce RTX 3080 is a big graphics card. Physically, this card is large – and it’s got a new power connector, too. You’ll need to to prepare yourself for the possibility that your current rig is too snug a fit for this new, slightly larger card before you buy it. You’ll also want to prepare yourself for a jump in performance the likes of which you might never have seen before… but maybe you already have an RTX 2080, and you believe there’s no reason to upgrade? Let’s take a peek at what’s in store here with the latest in biggest, baddest GPU power from NVIDIA.

The NVIDIA GeForce RTX 3080 Founders Edition graphics card works with 8704 NVIDIA CUDA Cores with a base clock speed of 1.44Ghz and a boost clock at 1.71GHz. This card has 10GB GDDR6X memory and a promised 29.7 teraflops of performance. 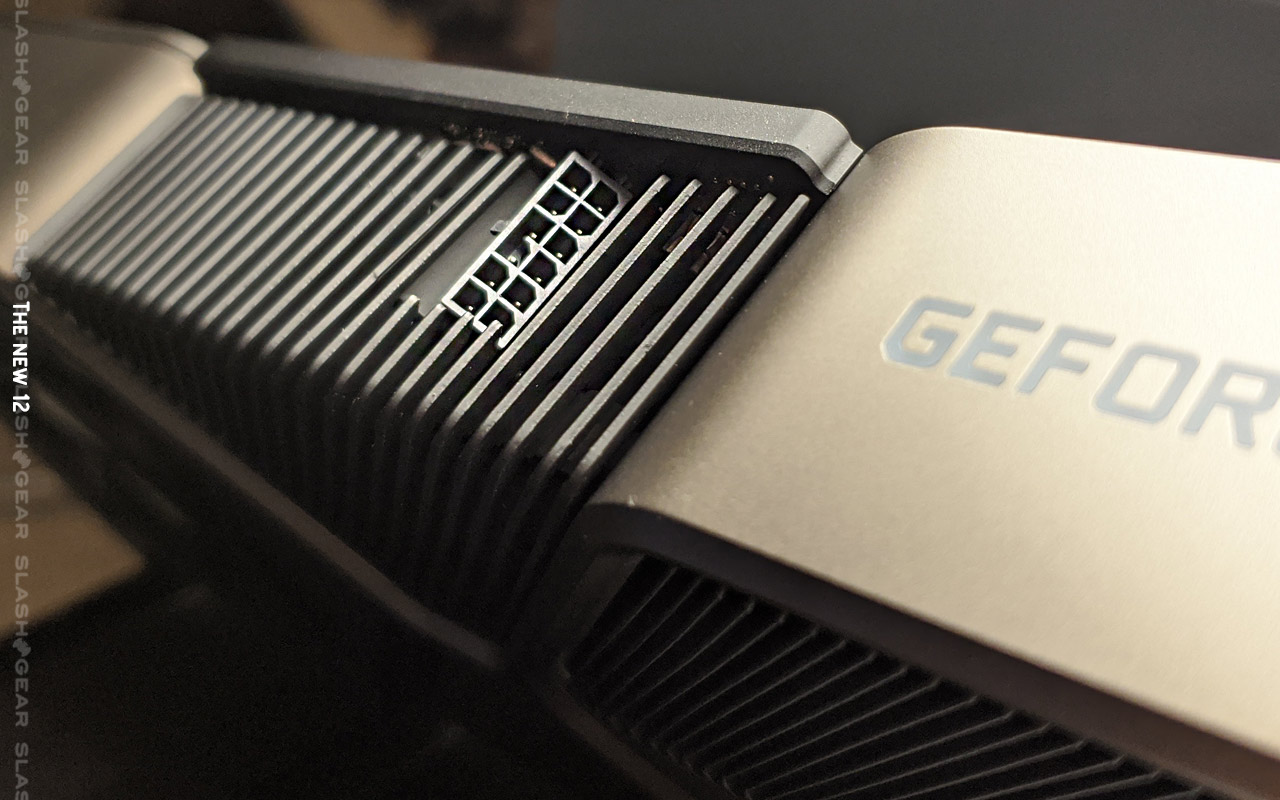 With the Founders Edition RTX 3080 we had a fairly straightforward experience with installation. The card is large – larger than the 10.5-inch long RTX 2080 SUPER we’ve replaced in the rig we’ve used for benchmarks and performance testing. The card is actually slightly less wide than the RTX 20 series (Founders Edition, anyway), at 4.4-inches vs last year’s 4.556-inches.

Provided your PC isn’t cramped to the absolute limit already, you shouldn’t have a big issue removing one card to install the other. If you’re using metal build bars for back support, there’s a good chance you’ll need something different – that extra 0.1556-inch was more than enough to require some rethinking of our setup if we thought we’d be keeping this card installed long-term. 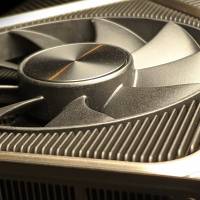 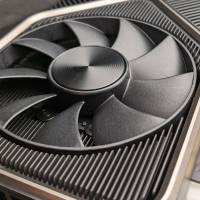 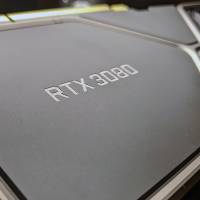 Not that you’d EVER block EITHER side of your graphics card for any reason, but it’s important to note that this card doesn’t have 2x fans on the same side, like so many cards did in the past. This card has one “front fan” and one “back-side fan” so air moves through the hardware in a manner that’s both efficient and effective.

This card uses NVIDIA’s new 12-pin power connector system, and it includes a 2x PCIe 8-pin converter. So, as long as you’ve got the one 8-pin connector you used for your last card, and you’ve got one spare 8-pin connector that you likely currently have sitting unused, you’ll be in business.

All tests done for this review were run with the latest available NVIDIA GPU driver: v.456.16 with an NVIDIA GeForce RTX 3080 (Founder’s Edition) graphics card. We’re working with an AMD Ryzen 9 3900X on an ASUS ROG Crosshair VIII HERO motherboard. The RGB lighting you see in a couple of the photos in this review comes from a pair of TridentZ RGB memory sticks and ARGB lighted fans. The RTX 3080 card works with LED lighting too – all in PURE, EYE-SEARING WHITE. 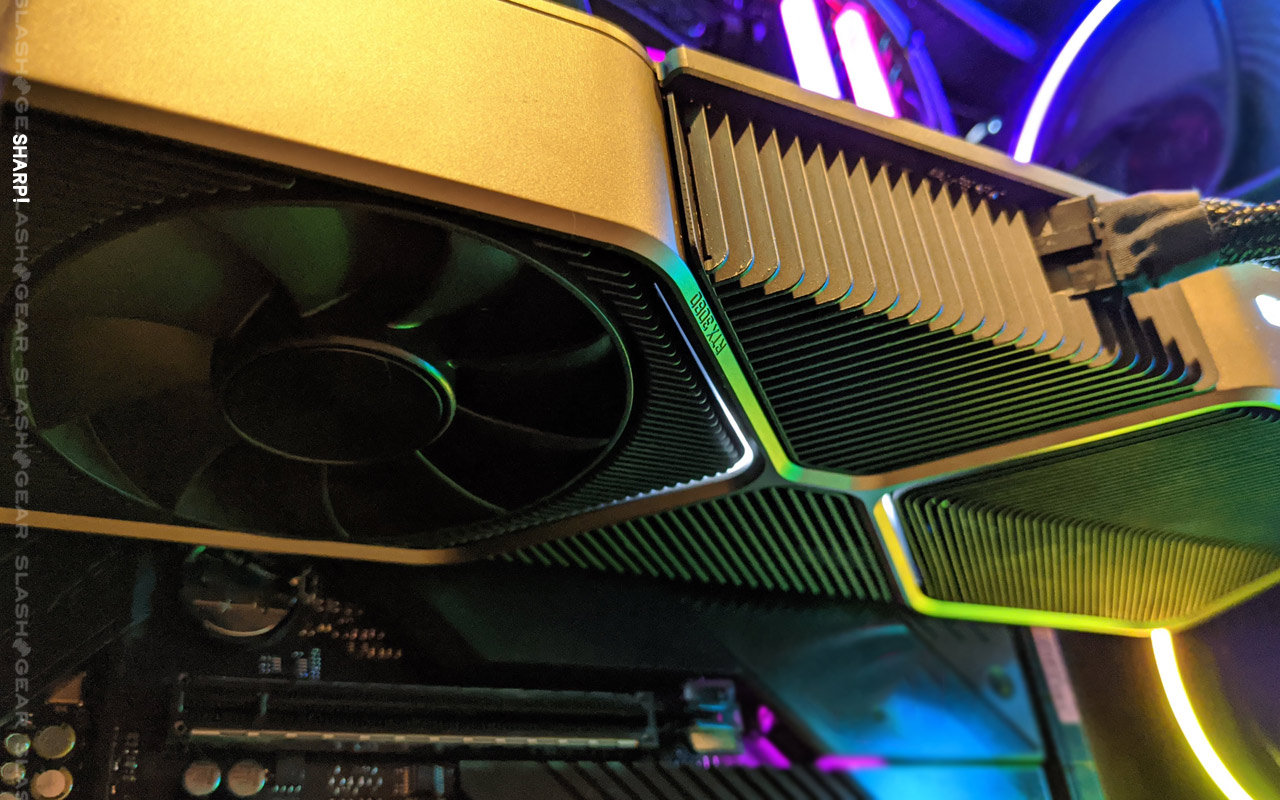 We ran a few synthetic benchmark tests with 3DMark over the past week, averaging results between sets of three runs for each individual test. Test results VS results for RTX 2080 Super (run with the same build setup) showed a significant jump in every single 3DMark test. 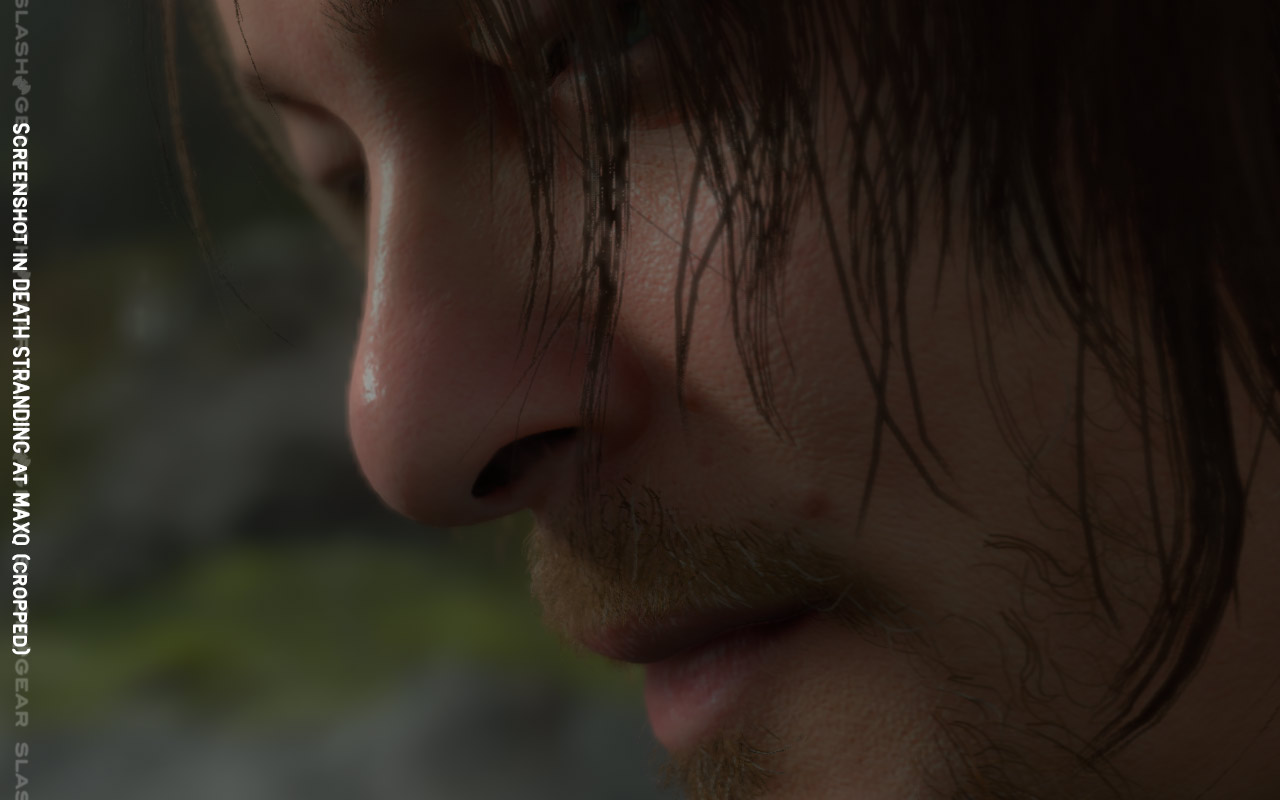 Tests run with Death Stranding show average frames-per-second with just a couple of variables. One test runs at 1440 resolution with max quality settings, with results showing DLSS OFF and DLSS ON. Sometimes that makes a big difference, other times it’s just a bump. You’ll see results of the same settings with 1440p, then with 2160p (aka 4K).

You’ll see both the RTX 2080 Super and the RTX 3080 here, with results from the same rig save the graphics card. This is true for tests run throughout this review. 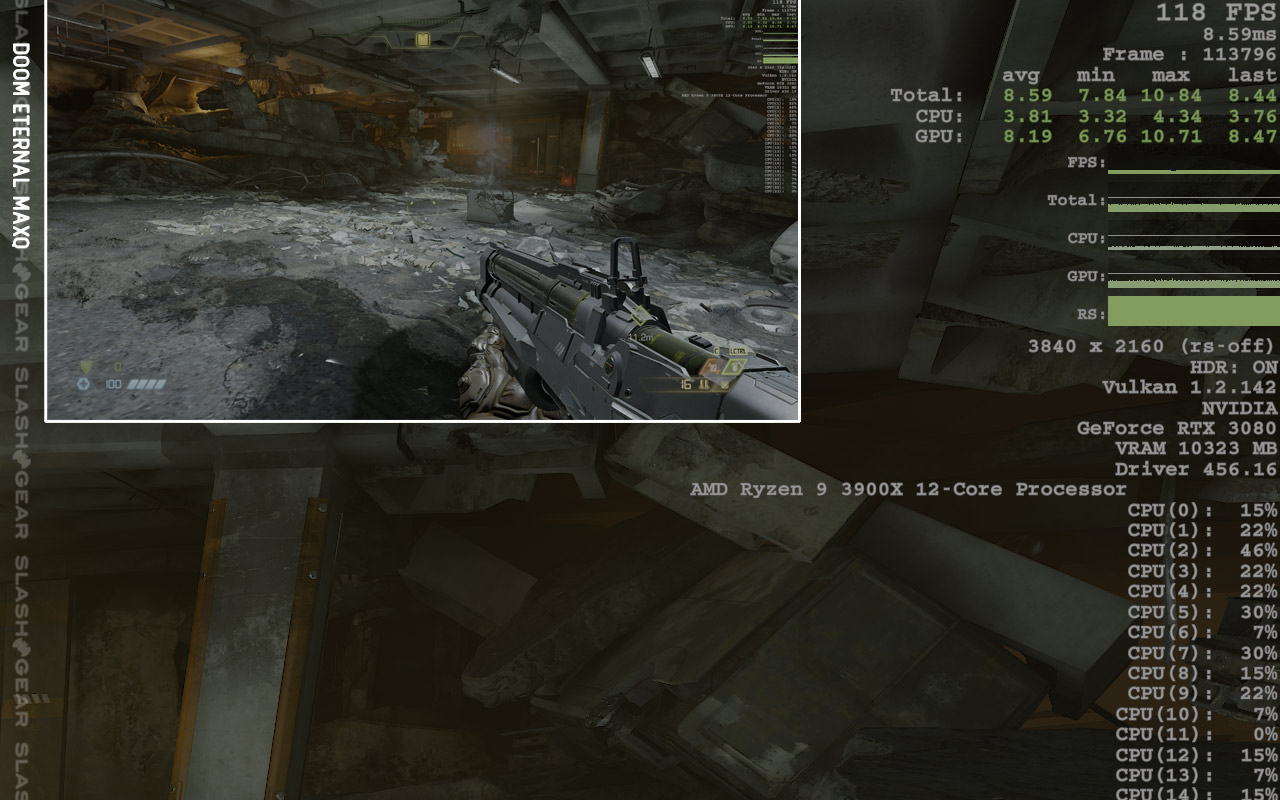 Below you’ll see test results run with DOOM Eternal. As extraordinary as Death Stranding looks – particularly when we get up close with cinematics, underwater environments, and the like – DOOM Eternal was the game during which I said “wow” out loud the most while testing the RTX 3080. 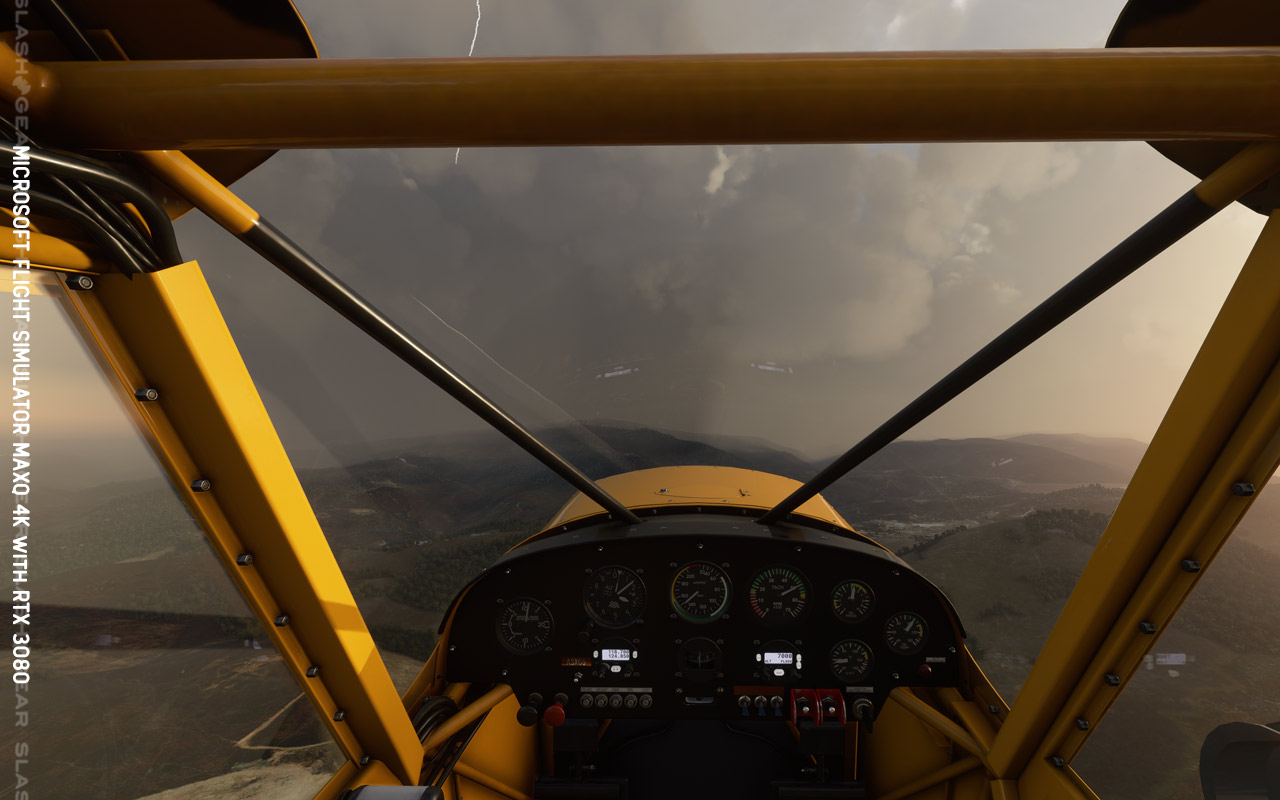 We also tested the most demanding game in the world right this minute – MICROSOFT FLIGHT SIMULATOR. It’s an absolute beast, the likes of which no GPU’s ever seen before. This game (or simulator, whatever you’d like to call it) has the potential to make most graphics cards look pathetic. The NVIDIA GeForce RTX 3080 does its best and, indeed, out-performs every other single graphics card setup we’ve benchmarked thus far.

That’s not half bad! It’s no 200 fps DOOM action, but with the RTX 3080 we get the most smooth Flight Simulator experience we’ve experienced yet, with maxed-out settings (ULTRA) and a 4K resolution (2160p).

The NVIDIA GeForce RTX 3080 Founders Edition graphics card has a release date of September 17, 2020. The starting price for this specific RTX 3080 is approximately $699 USD. You’ll find a variety of configurations available from NVIDIA partners soon, too, for prices according to their power and features.

It’s been a long time since graphics cards transitioned from a niche enthusiast product for gamers to an essential part of the best-possible computing experience for users of all sorts. Now, with the boosts in performance and modifications to the design of the card enacted here, the NVIDIA GeForce RTX 3080 represents NVIDIA’s dedication to the future of both work and play.

With the NVIDIA GeForce RTX 3080, we’ve witnessed not only a jump in performance year-to-year, but a significant positive jump for NVIDIA to a new era in industrial design. If you’ve been waiting for what seems like forever to upgrade your graphics card, now’s the time. The NVIDIA GeForce RTX 3080 is well worth the price you’ll pay for it, right out the gate.

ALSO: Stay tuned as we expand on this review with more judgement on how well it handles creative applications and work. This isn’t over yet!