Acer has officially announced the Iconia Tab A200, its latest Android tablet, though don’t expect any Transformer Prime-style performance rivalry here. The Iconia Tab A200 runs Android 3.2 on a Tegra 2 processor, not the newer Tegra 3, promising affordability rather than cutting-edge specs. However, Acer has confirmed that the A200 is in line for an Ice Cream Sandwich upgrade come January 2012.

The 260 x 175 x 12.4 mm slate weighs in at 720g and comes with either 8GB or 16GB of storage. There’s a 3,260 mAh battery, good for up to 8hrs of video playback or 400hrs of standby Acer reckons, together with 1GB of RAM and a full-sized USB port for connecting external peripherals like keyboards. A microSD card slot can be used to add to the storage, and the 10.1-inch display runs at 1280 x 800 resolution with a 2-megapixel front-facing camera above it (but no rear camera). 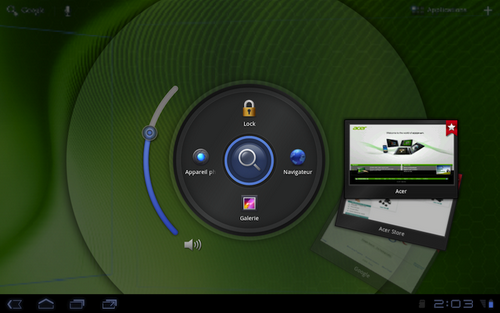 There’s the usual WiFi b/g/n, Bluetooth 2.1+EDR, GPS, a 3.5mm headphone jack, gyroscope and accelerometer, together with DLNA media streaming under Acer’s clear.fi brand. The company will preload a slightly customized UI, too, with the so-called Acer Ring offering shortcuts to the browser, gallery, volume, multitasking and other elements of the system.

Pricing is yet to be confirmed, though we’re guessing this will be in the bargain area of the tablet line-up. Acer is tipped to be bringing two Tegra 3 based models, the Iconia Tab A500 and Iconia Tab A700 to market imminently.