In many ways, for many perfectly sound reasons, this 2022 Honda Civic Hatchback shouldn’t exist. The regular Civic is a mainstay of the compact sedan segment, a perennial best-seller, and a rare outlier in the market transition to SUVs and crossovers. This more practical, more enthusiast-friendly version with its manual gearbox option, though, would seem at first glance like a tougher sell to the accountants and product planners.

To my eyes, the 2022 Civic Hatchback has two main advantages over its Civic Sedan sibling. The first is, obviously, the greater practicality of the hatch versus a traditional trunk. Viewed in profile, the silhouette of the new model leans more toward a fastback style than before, but that doesn’t really dilute the practicality. 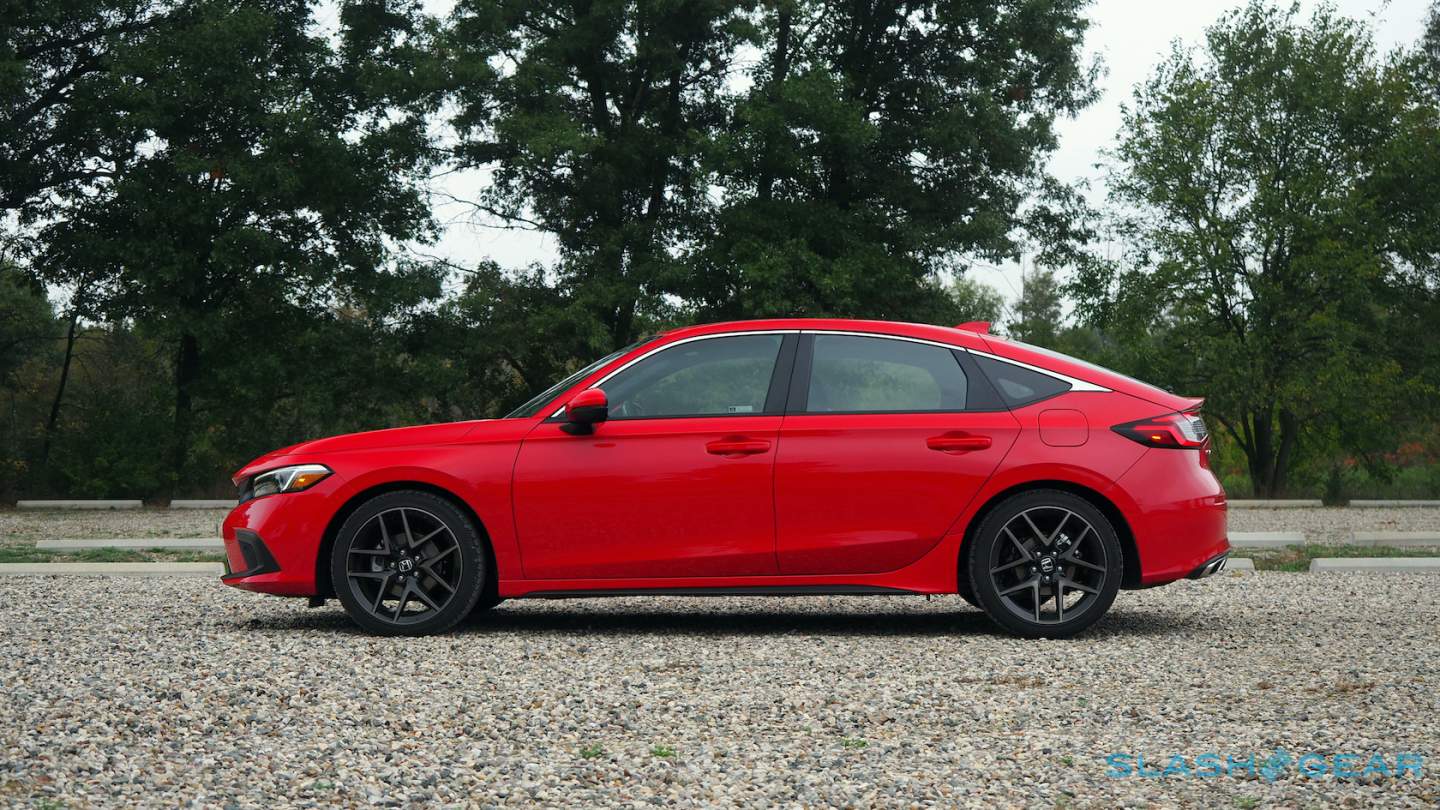 At 24.5 cu-ft with the rear seats up, total space is actually down just a little from the 25.7 cu-ft of the outgoing car. Honda, though, has made that space easier to access, widening the trunk opening by more than an inch and a half. The slick retractable cargo cover – which pulls across from the side, making it easy to stow versus a traditional parcel shelf – is carried over. The sedan, in contrast, tops out at 14.8 cu-ft. 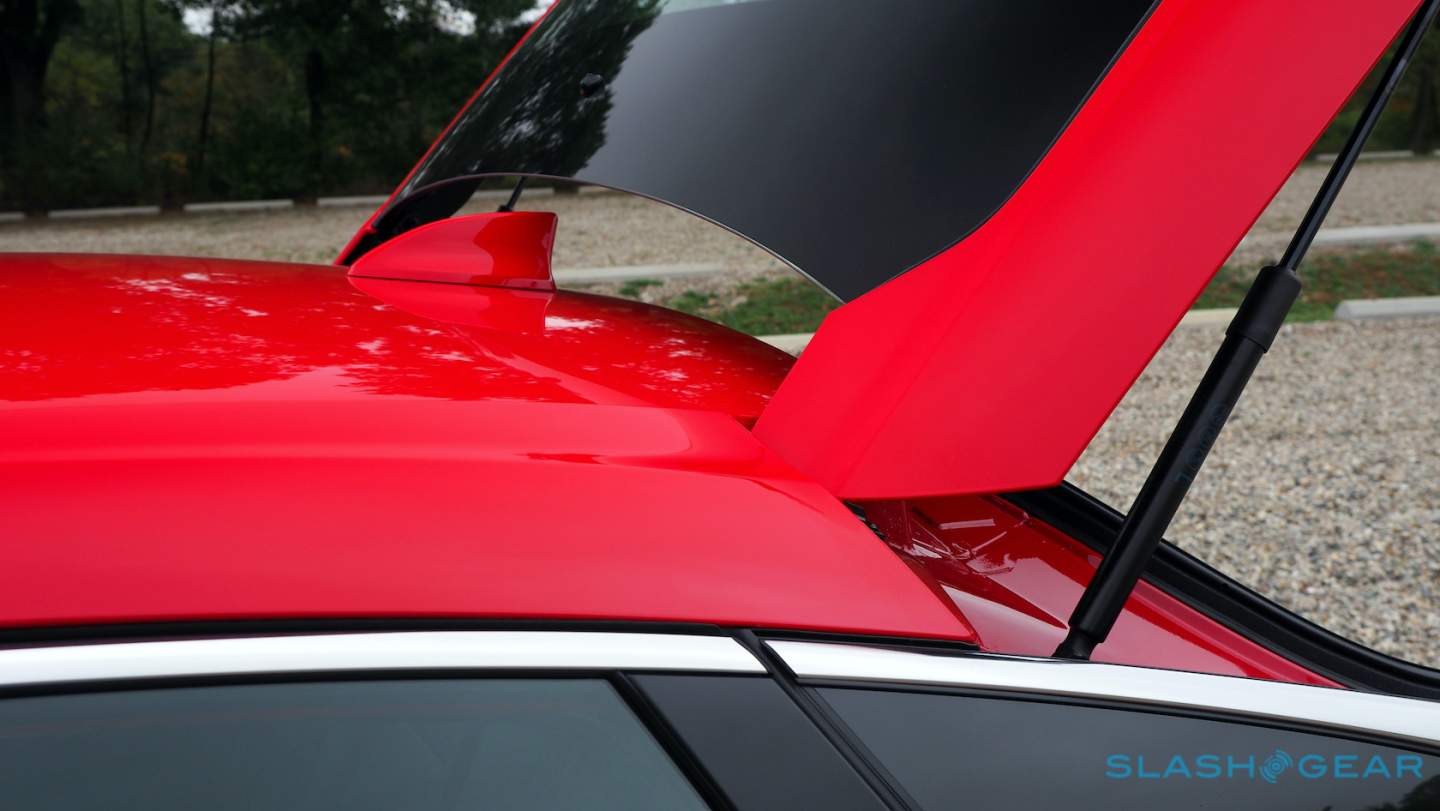 The other big advantage – and, I’ll admit, this comes down to personal taste – is at the opposite end. Many months after its big reveal and I’m still struggling to love the Civic Sedan’s fascia. The way the hood slightly overhangs the grille just makes me think of Gonzo the Great from The Muppets.

For the 2022 Civic Hatchback, though, Honda revamped the grille with a new, hexagonal pattern, and it trimmed back the hood. The result, to my eyes, is much cleaner. 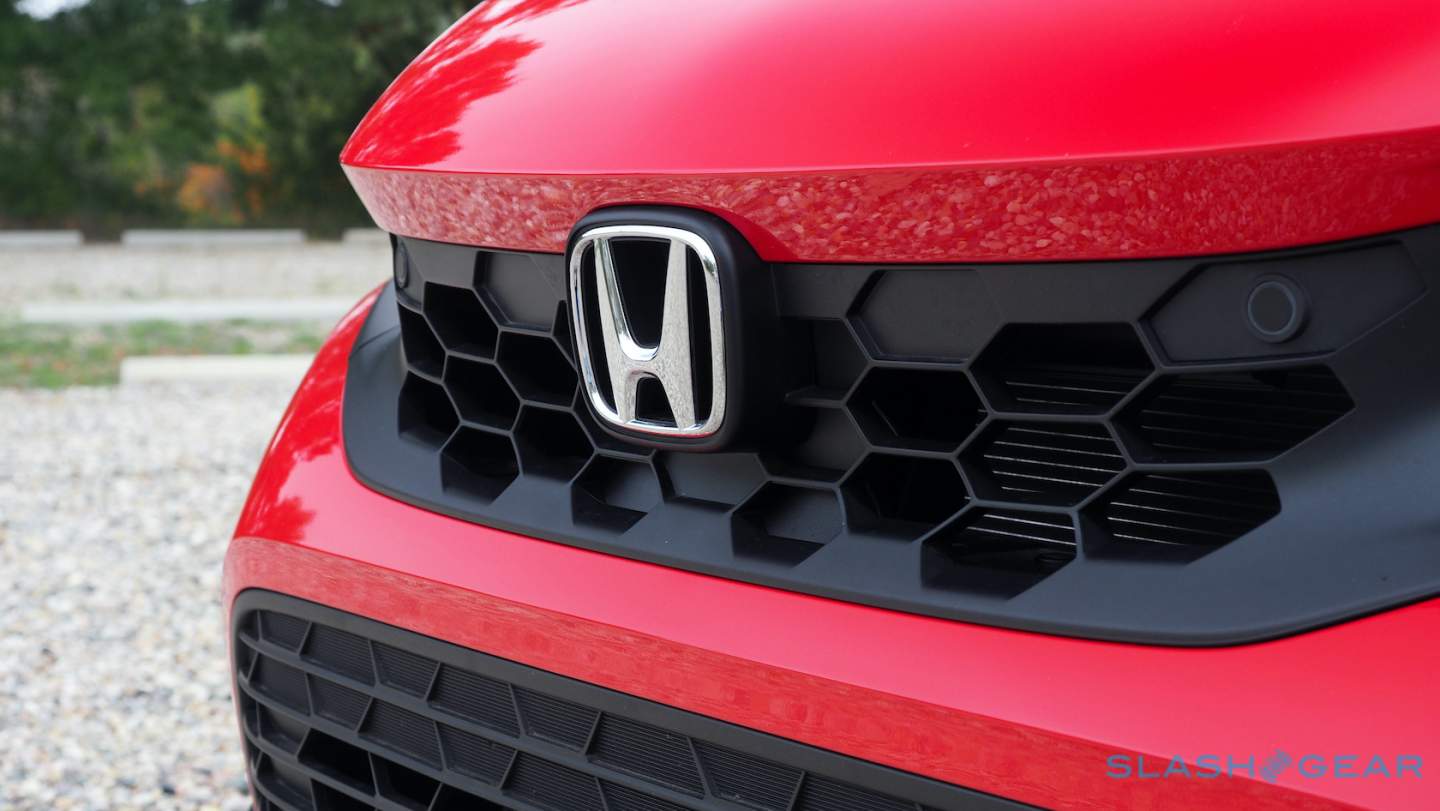 Otherwise, though, this is a familiar car. Just about everything from the front to the C-pillar just behind the rear doors is the same, on Sedan and Hatchback, a few minor trim pieces notwithstanding. The beltline is lower, the A-pillar pulled back a couple of inches, and the result is less rear weighting visually and improved visibility from inside. A slightly wider rear track – the wheels pushed half an inch further out than on the Sedan – lower front fenders, and side mirrors that mount on the doors all help there too. 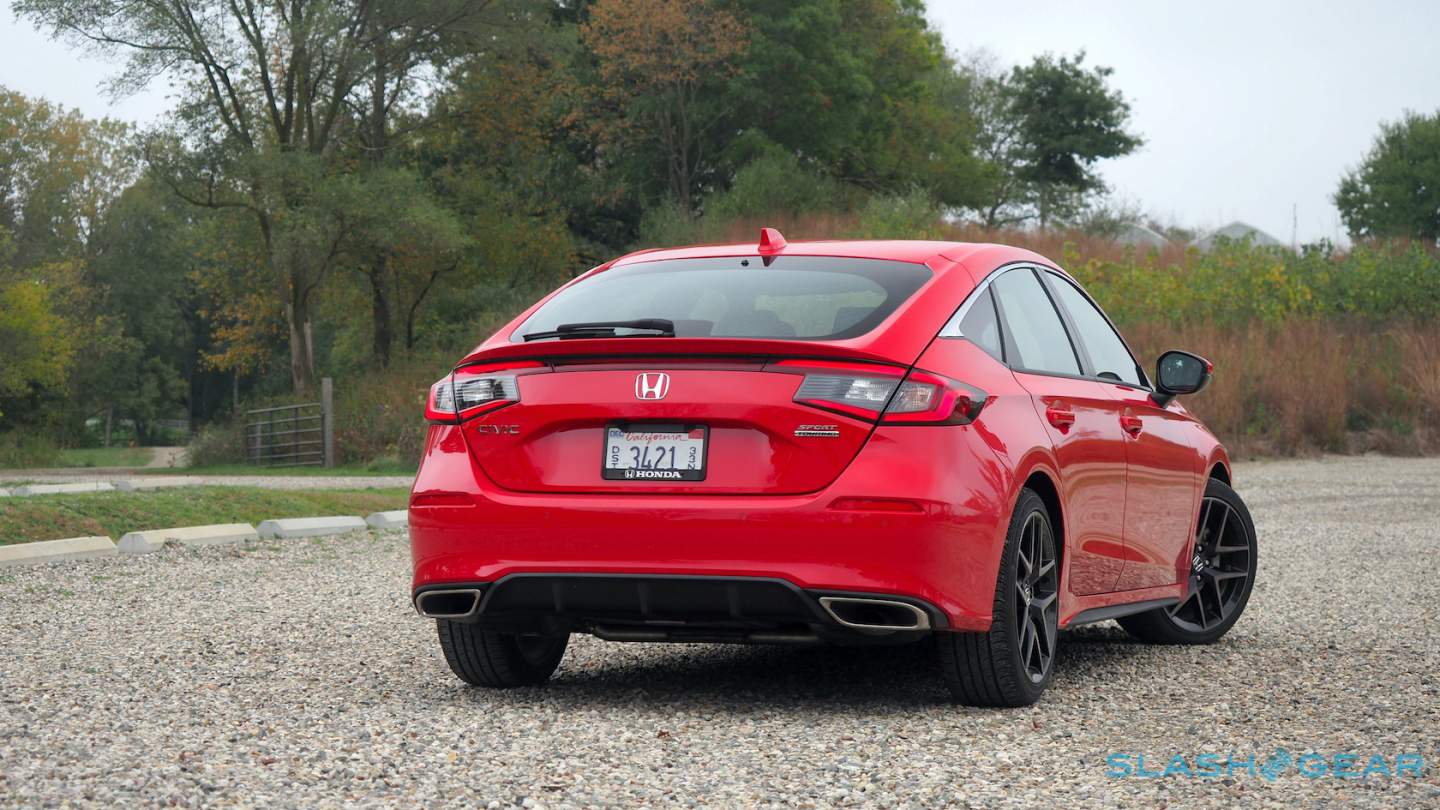 Inside, too, is familiar, and that’s still a very good thing. Honda’s dashboard design – with its bold mesh, joystick-like vent controls, and pleasingly straightforward switchgear – still sets it apart from the crowd. The buttons and knobs have the heft you’d expect from a more expensive car, while thoughtful materials selection makes it tougher to find a piece of trim on which to leave fingerprints and smudges behind. 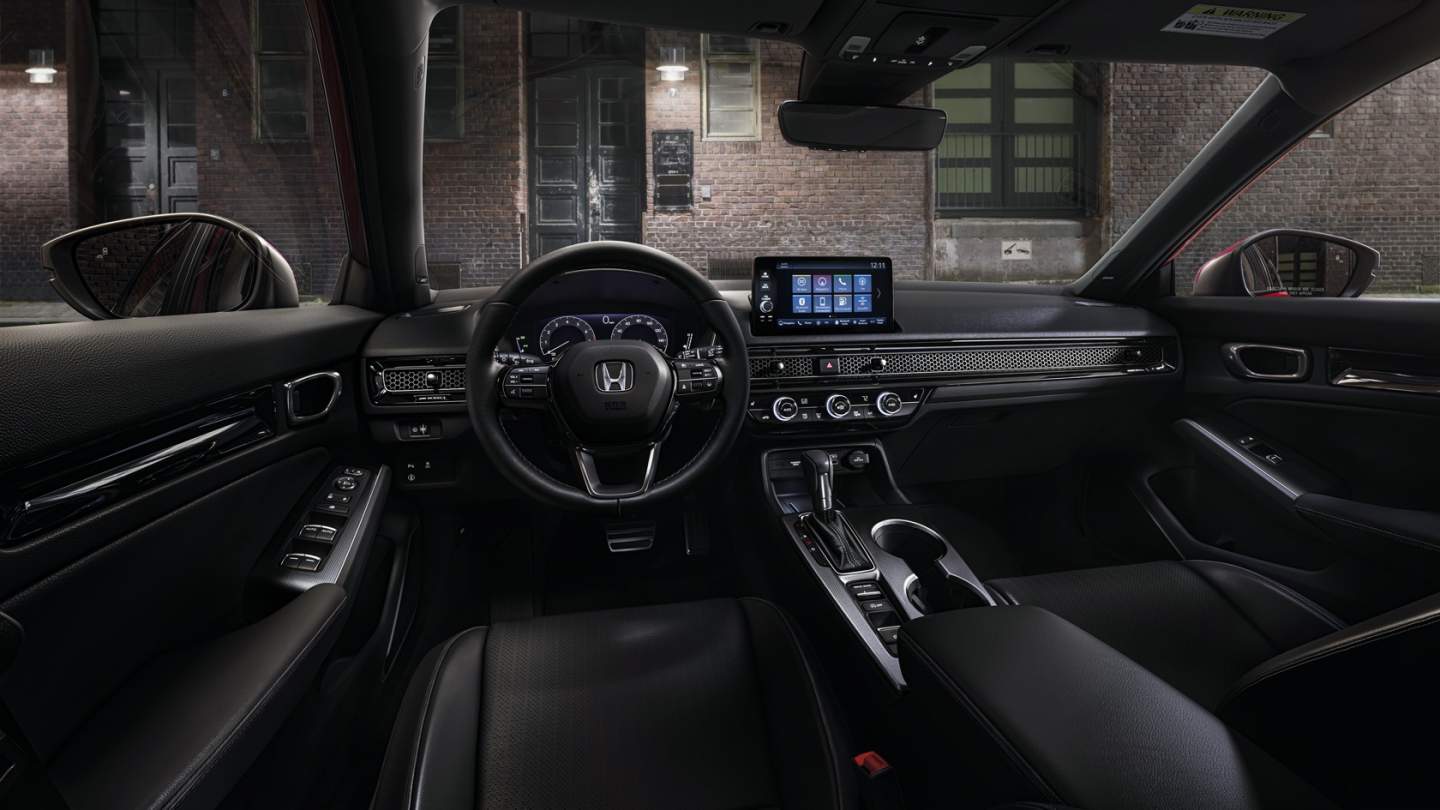 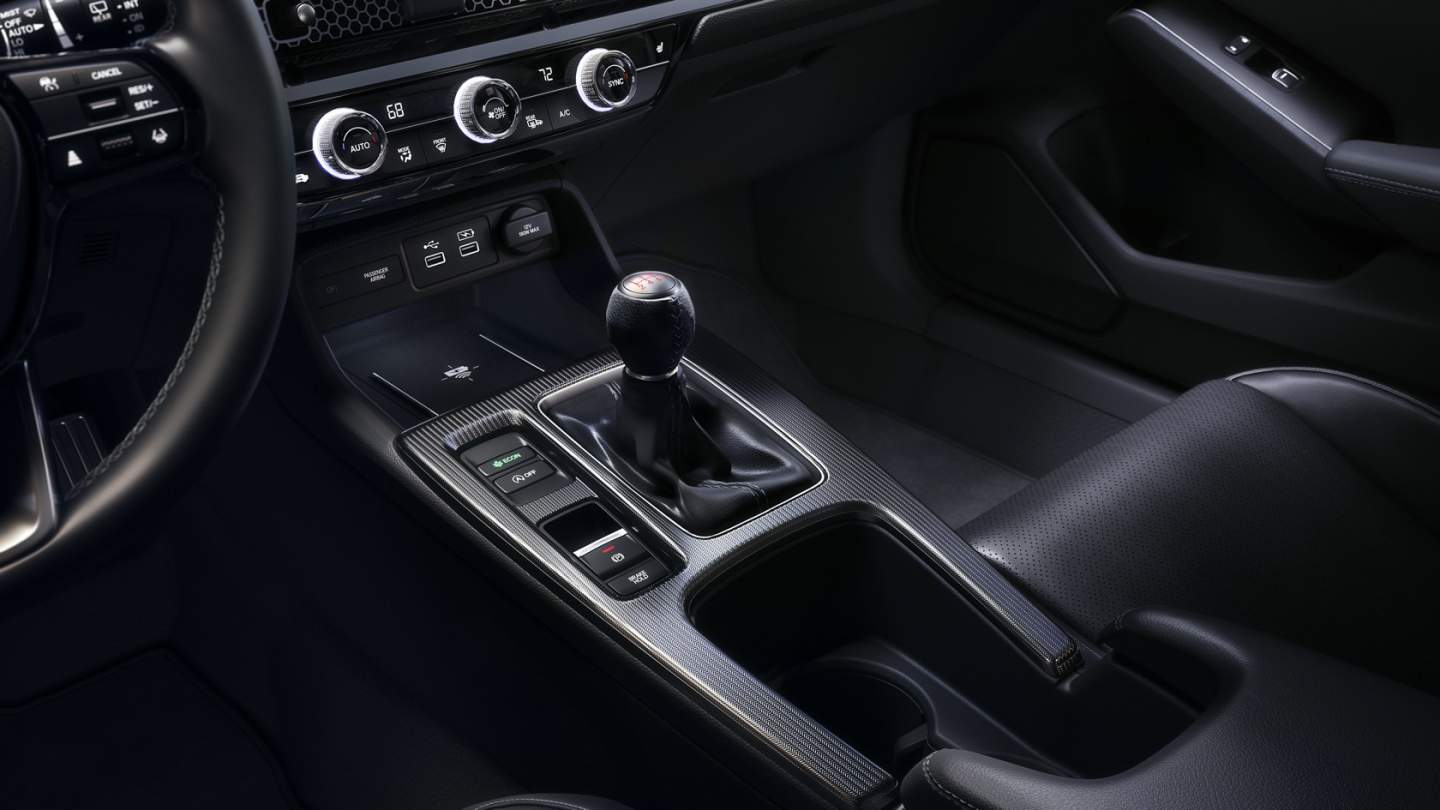 Apple CarPlay and Android Auto are also standard on all trims; a 7-inch touchscreen is the default, with the Sport Touring upgrading that to a 9-inch touchscreen with navigation and wireless smartphone projection. It gets the 12-speaker Bose audio system, too, plus wireless phone charging and a fully-digital 10.2-inch driver display versus the 7-inch hybrid analog-digital cluster of the other cars.

LX and Sport trim have manual driver’s seat adjustment; EX-L and Sport Touring have 8-way power driver’s seat, plus heating for those in the front, and leather trim. 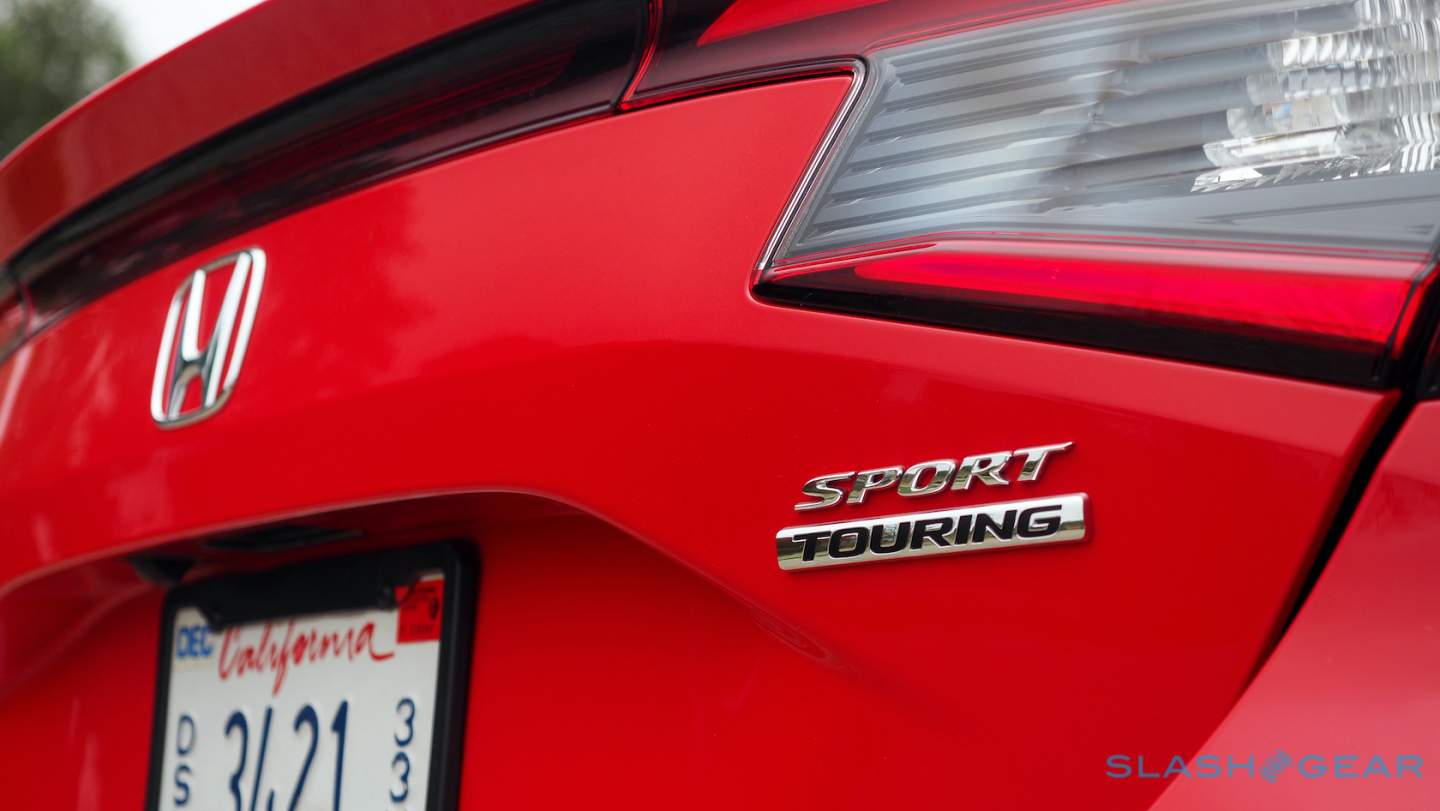 As with the Civic Sedan, Honda offers two engines. LX and Sport trims get the 2.0-liter inline-4, with 158 horsepower and 138 lb-ft of torque. EX-L and Sport Touring upgrade to the 1.5-liter turbocharged inline-4, with 180 horsepower and 177 lb-ft of torque. While the LX and EX-L have a CVT (continuously variable transmission), Sport and Sport Touring give the no-cost option of a CVT or a six-speed manual gearbox.

That’s a big difference from the Civic Sedan, where you don’t get the stick-shift option. Paired with the smaller but more powerful turbo engine in the Sport Touring, it makes for an unexpectedly engaging car.

I’m all for saving the manual, but the blunt reality is that not every example is a good one. Honda’s, though, has plenty to recommend it; neither too long in its throw nor too short, and with enough heft to be pleasing but not exhausting in traffic. The clutch is nicely weighted, too, with a well-defined bite point. It’s easy to modulate, which makes a big difference for hill starts, though all 2022 Civic Hatchback get auto brake-hold too. 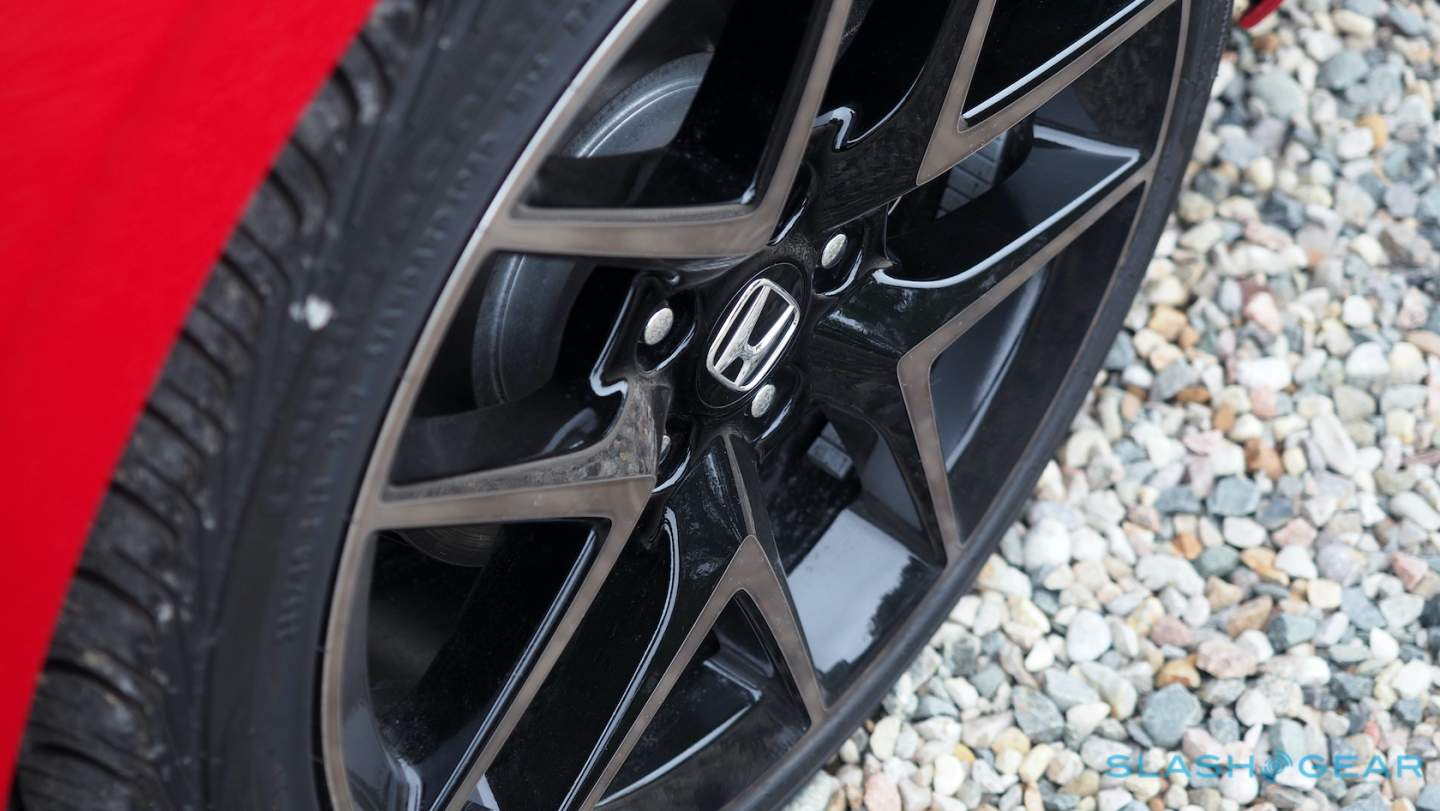 Combined with Honda’s punchy but not over-powered turbo engine, and the result is something to smile about. The upcoming Civic Si and the Type R will, of course, push even further into enthusiast territory, but the hatchback does a fine job of straddling the everyday and the impromptu-eager. Find yourself on a fun little backroad and the Civic can play along nicely, but it’s just as content settling back and ambling around town.

There, unsurprisingly, the CVT has an edge in ease. It’s not as rubber-band slushy as many of its ilk, while the paddle shifters and faux ratios at least invite some greater involvement should you care to partake. Sport mode adds some urgency and encourages the Civic to push further toward the redline. Again, this isn’t going to replace a sports sedan, but the stiffer underpinnings and more precise steering leave it confident in turns without sacrificing compliance. 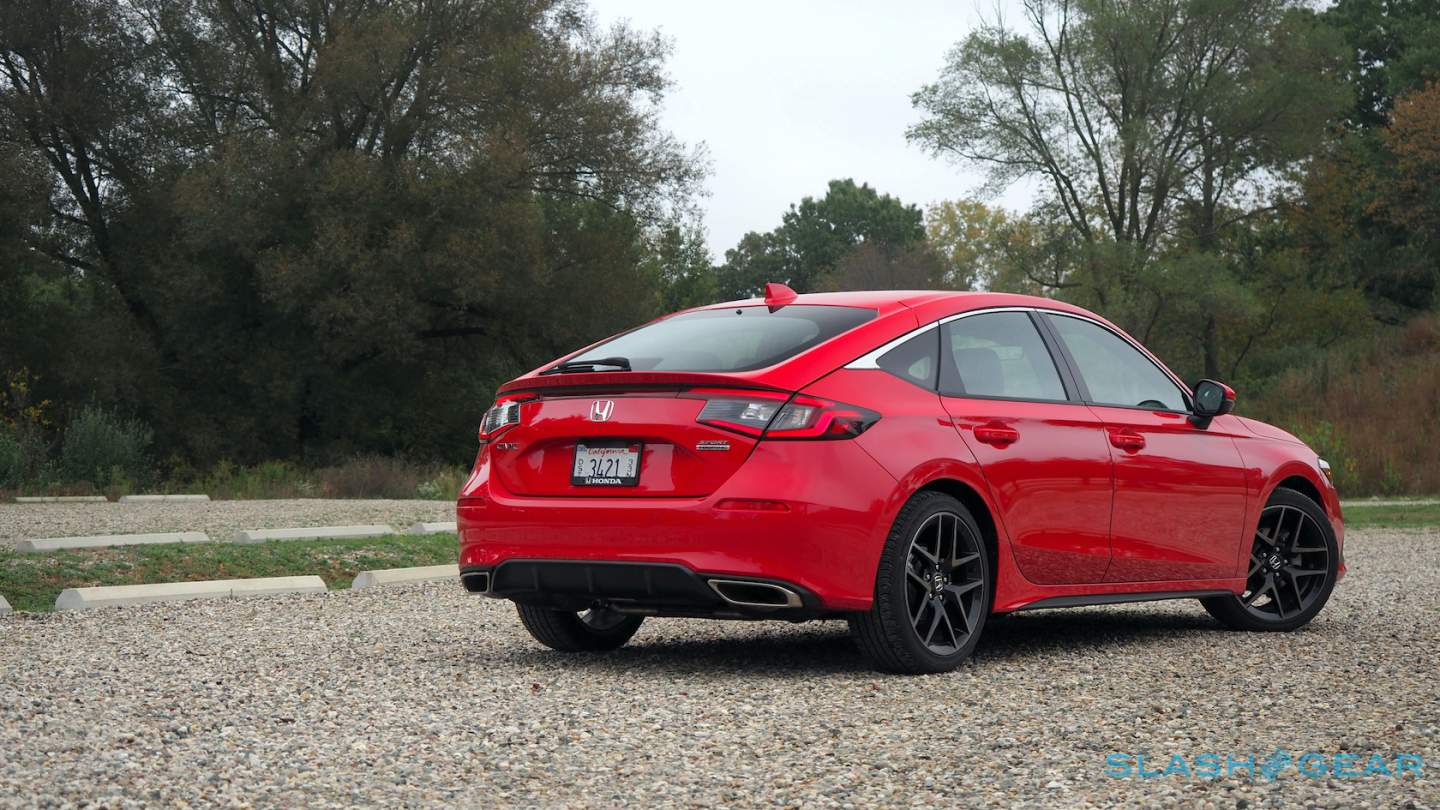 Honda didn’t have a 2.0-liter car on hand, but having driven that engine – with the CTV – in the Civic Sedan I can predict with reasonable confidence that it will be perfectly serviceable in the Civic Hatchback, too. Neither as enthusiastic or as refined as the turbo, nor as economical: at best, the EAP says the 2.0-liter will do 33 mpg combined, versus the 1.5-liter’s best showing at 35 mpg. Exact figures vary depending on trim and transmission.

Neither is a bad choice, though. Honda’s heaping of features familiar from much more expensive cars helps keep the shine there, too. Steering assist is particularly useful, effective as much off the highway as it is on. It’s still a hands-on system, the Civic Hatchback getting snippy if you aren’t pulling your weight, but it handles all but the most twisting roads neatly. 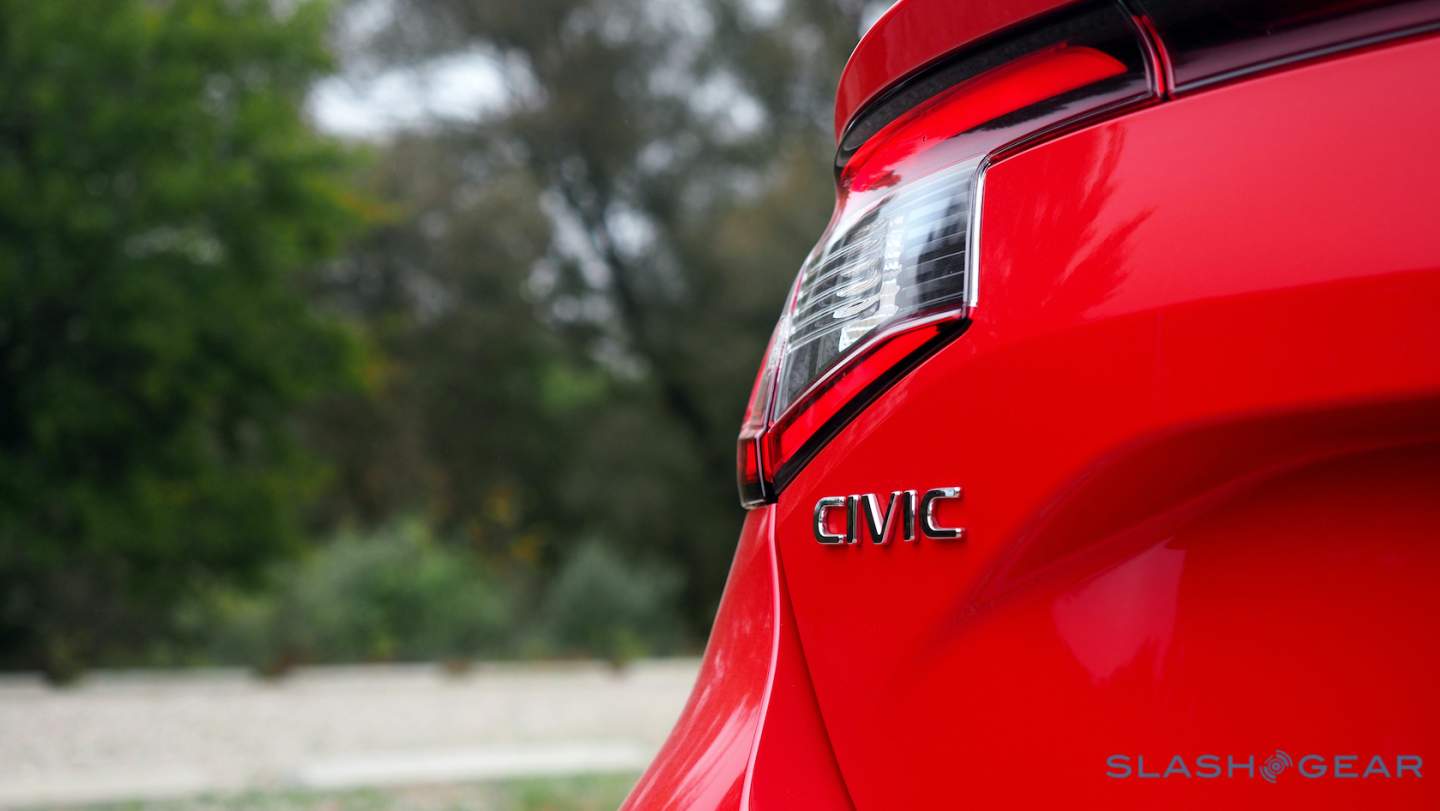 Compared to the Civic Sedan, Honda expects only 20-25 percent of buyers to opt for the hatchback. That’s a reflection more of US drivers’ antipathy toward hatches than it is of confidence in the car itself. Of that, only 8-10 percent are likely to go for the six-speed manual, Honda forecasts.

The fact that it’s even willing to keep offering that combination – and not force everyone to wait for either the fast-approaching Civic Si, or next year’s hotly-anticipated new Civic Type R – is a gratifying diversion from most of the rest of the auto world right now.

As Honda seldom tires of telling us, over its eleven generations the Civic has become a big deal in the compact car segment. Popular with younger buyers, a gateway to the Honda brand, and a proving ground for the mass market application of active safety and convenience tech that once would’ve been reserved for far more expensive metal. 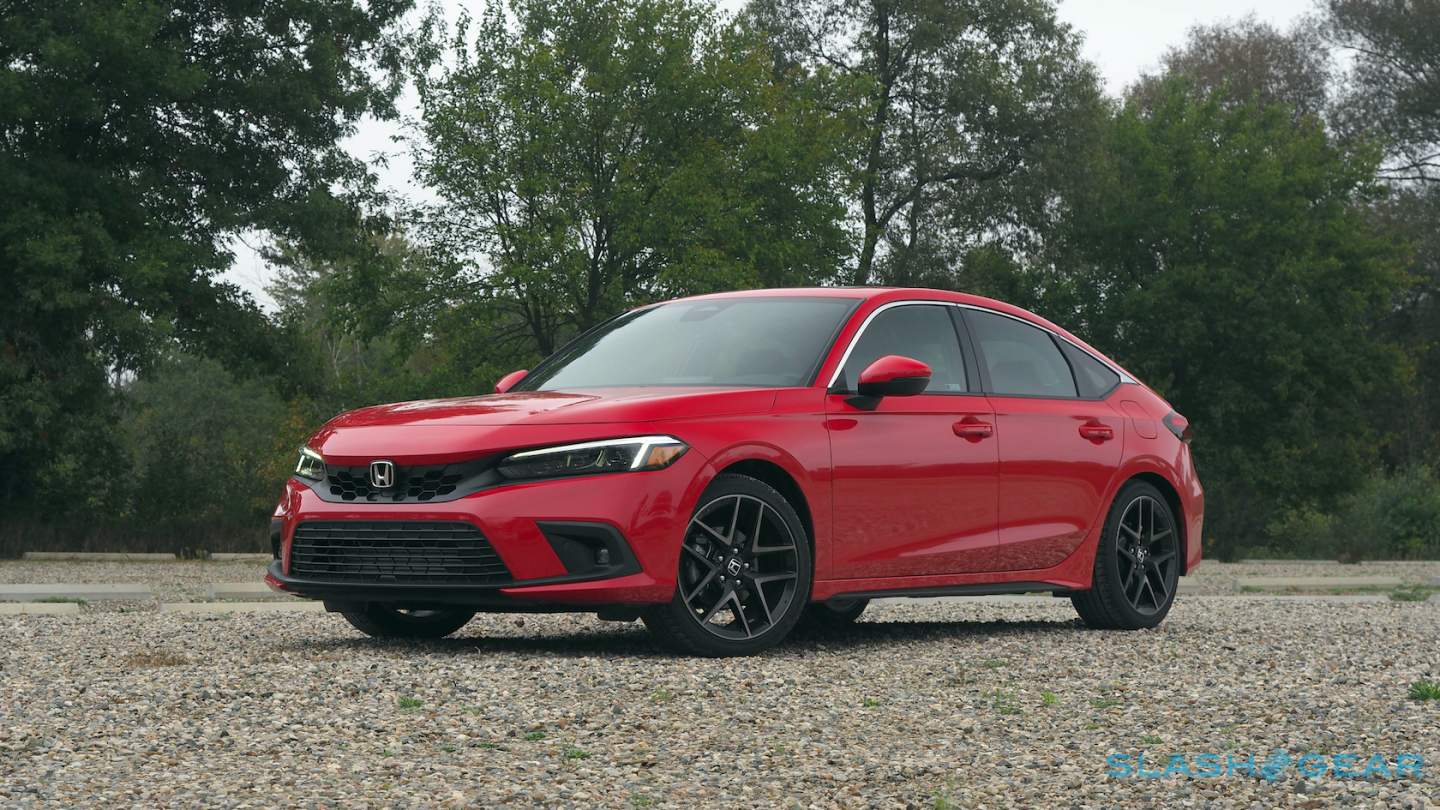 What’s gratifying is Honda’s willingness to look beyond complete and utter simplification. The automaker could, after all, make a perfectly reasonable argument that manual gearboxes are now so niche as to be unnecessary. That it doesn’t – that it makes the mildly impractical but generally admirable decision to please that subset of purists, regardless of their meager number – is a decision worth celebrating, and another reason why the Civic is so often the pick of the segment.

Faced with the 2022 Civic Hatchback, then, you can’t really begrudge Honda some pride. Here, more than with most, it’s the idea of a whole package that stands out. A great driving experience, plenty of practicality, more gadgets than you might expect, and finished off with decent style and aggressive pricing. Yes, there’s strong competition elsewhere, but there’s a very good reason the Civic is the benchmark and this 2022 model doesn’t change that.