It’s hard to express just how important the 2022 Honda Civic Sedan is. Gateway to Honda ownership, nearly 3 out of every 4 Civic buyers end up coming back to buy another Honda: screw up your updated model, then, and you’re basically saying goodbye to a generation of new brand loyalists.

At the same time, this 11th generation Civic arrives as Honda is teetering on the edge of some huge changes. It’s a microcosm of the auto industry as a whole, of course: increasingly precarious sedan sales, greater attention on electrification, and questions around economy, value, and practicality. For some of those, the 2022 Civic puts in a grand showing; in others, I still have some unanswered questions. 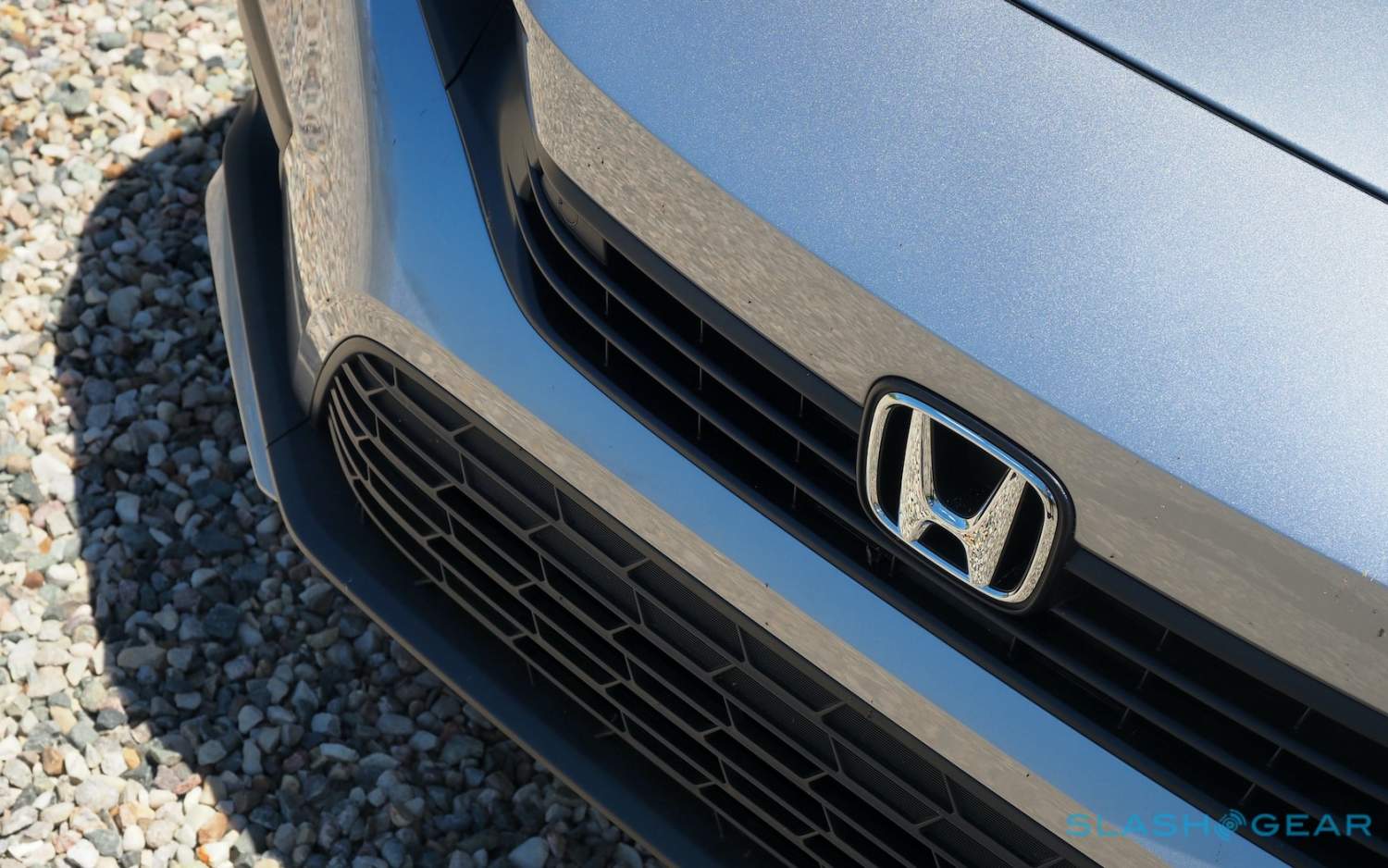 There’s no denying it’s a sharp looker. The changes over the old Civic become more clear the longer you look at it, with Honda’s biggest adjustment being to the beltline and the A-pillar. The former has been lowered at the rear by over an inch, reducing some of the visual bulk back there, while the latter has been pulled back around 2-inches. 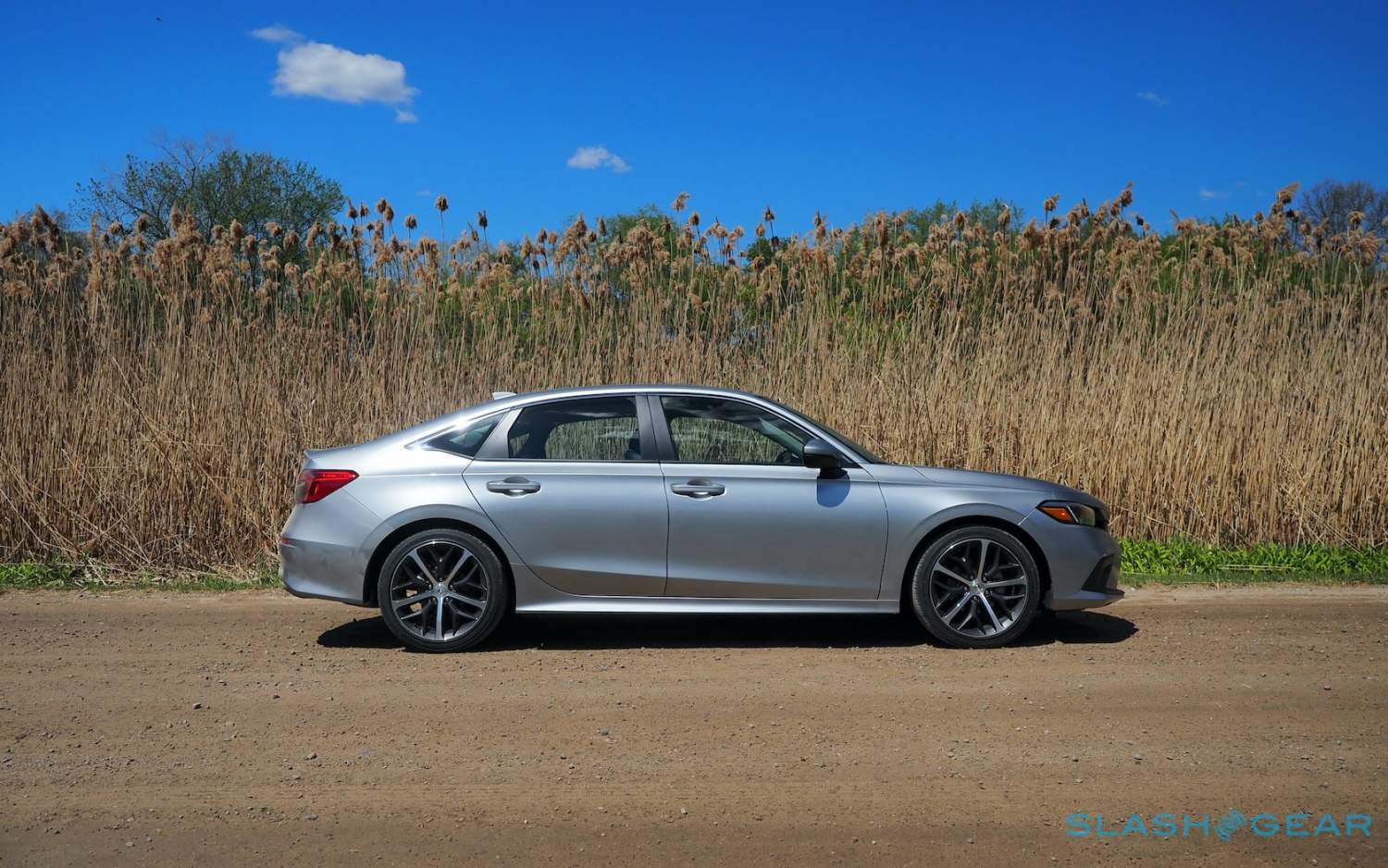 If there’s a glitch in the overall cohesiveness it might be that body-colored nose. I suspect I’ll need to see more new Civic Sedans on the road before I get past my first impression that it’s a tribute to Gonzo the Great from the Muppets.

Overall, though, the result is a longer hood and a car that appears lower and leaner than the old sedan. Honda doubles-down on that by pushing the wheel track out a little more, dropping the front fenders, and generally smoothing out the detailing. The side mirrors now mount on the doors, and even the door handles have been stripped of their cylinder locks for the first time. 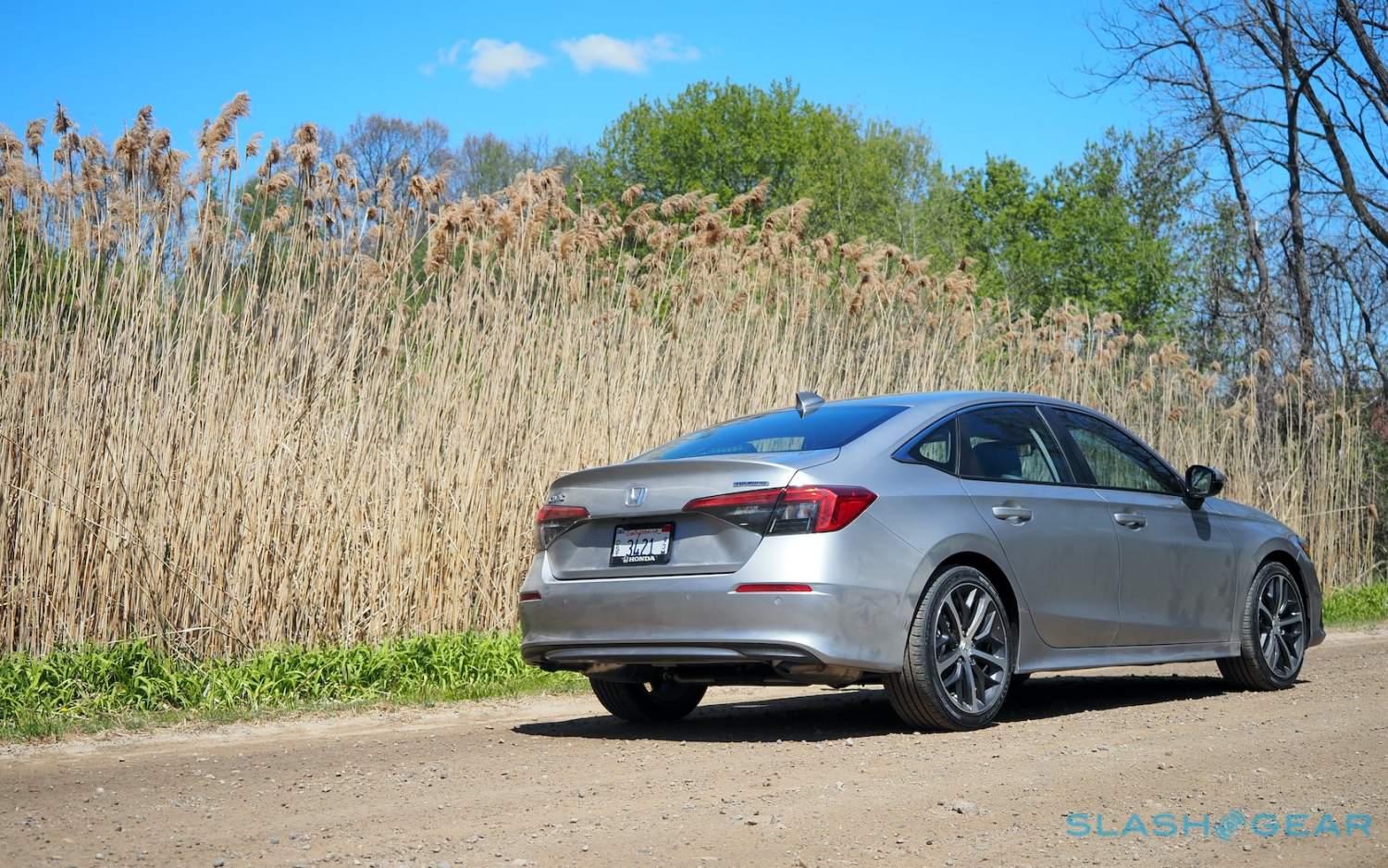 It’s not just for aesthetic reasons, though. The lower beltline means the rear seats feel more spacious; the trunk is a flexible 14.8 cu-ft (or 14.4 cu-ft on the Touring trim). Combined with a lower front dashboard cowl, there’s a noticeable uptick in driver visibility, and indeed the 2022 Civic Sedan feels much like like a driver-focused car. No, this isn’t the feisty Civic Type R which is still to be unveiled, but it’s definitely more rewarding than the old sedan.

LX and Sport trims get a 2.0-liter naturally-aspirated four-cylinder engine paired with a CVT, good for 158 horsepower and 138 lb-ft of torque. Compared to the outgoing car, the CVT has been retuned for a quicker, smoother response, Honda says. It’s a perfectly fine drivetrain, and the Sport trim now gets a Sport drive mode too which nudges the CVT even further toward eager driving. 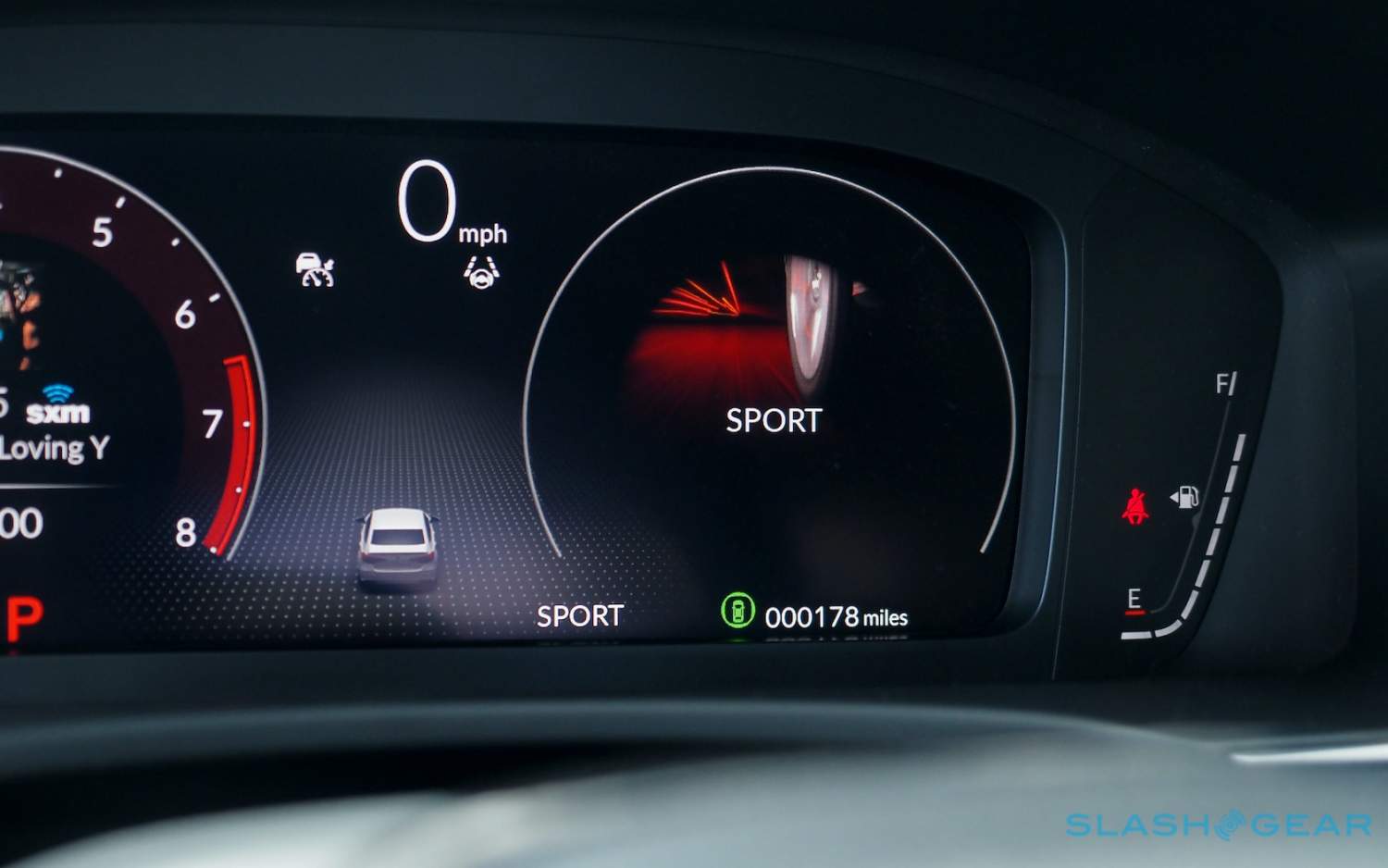 Still, the pick of the engines is definitely the 1.5-liter turbo-4 in the EX and Touring. Again, there’s a CVT, along with 180 horsepower and 177 lb-ft of torque, and the Touring trim gets the Sport drive mode too. The result feels like a much bigger engine: more refined when you’re cruising, and more eager when you’re pushing harder. The slight lag in power arriving which the 2.0-liter still suffers occasionally isn’t present in the turbo.

Helping either way are the revamped underpinnings. Honda says the 2022 Civic shows 8-percent more torsional rigidity, 13-percent more bending rigidity, and has a tenfold increase in structural adhesive across critical areas. The steering has been retuned for a more precise feel and response, and the suspension tuned for a 20-percent smoother ride. 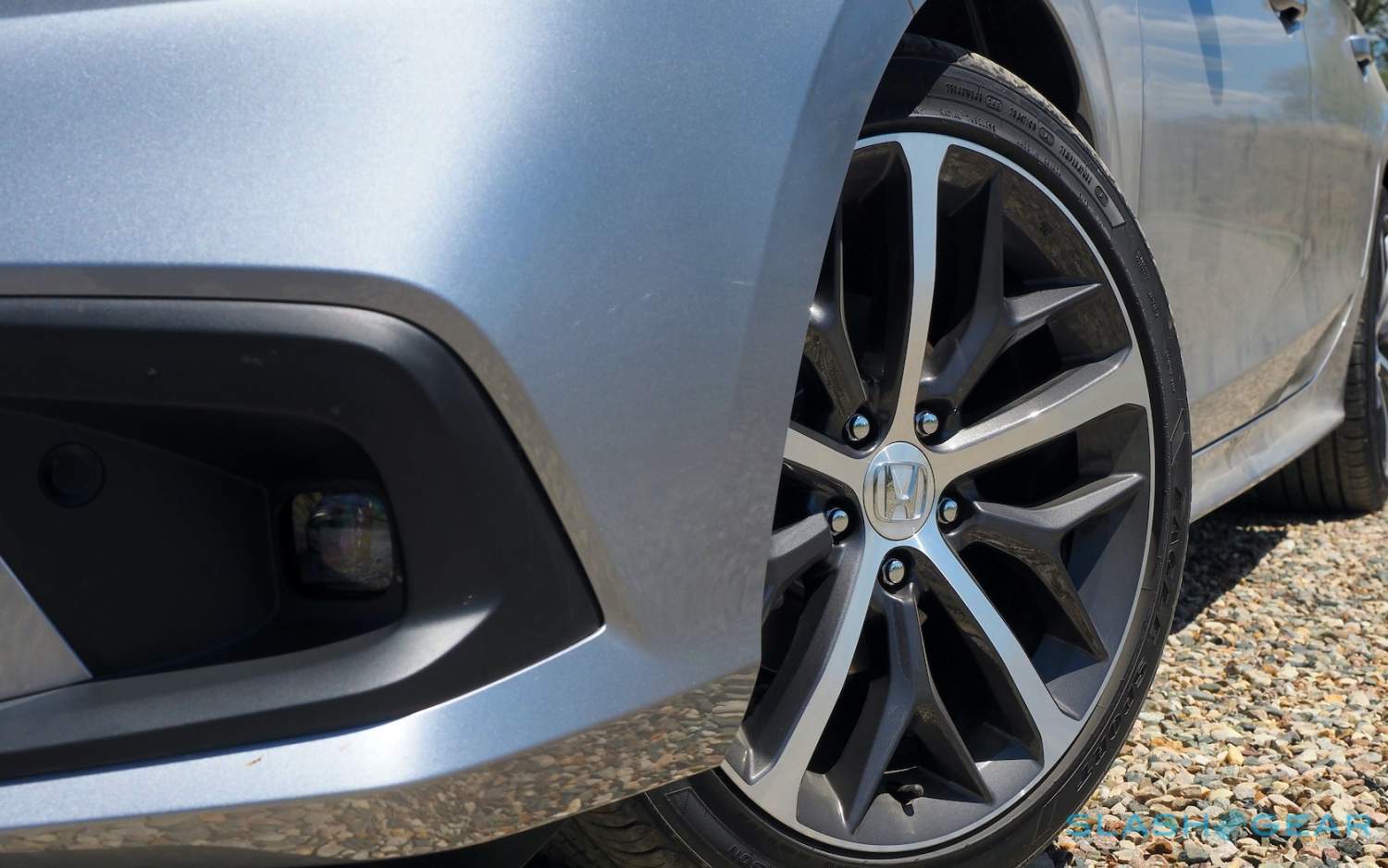 Lots of numbers, sure, but the takeaway is simple: Honda has really nailed the new Civic’s overall tuning. It feels balanced and poised, with a nice amount of feel through the steering without losing its refinement. You notice it in the corners, too, where the sedan feels planted and stable.

What catapults Honda to the front of the class is the new Civic’s cabin. Gone is the old car’s sturdy-but-staid expanses of plastic and bland buttons; in its place is a design that’s genuinely interesting and – equally important – executed beautifully, too. 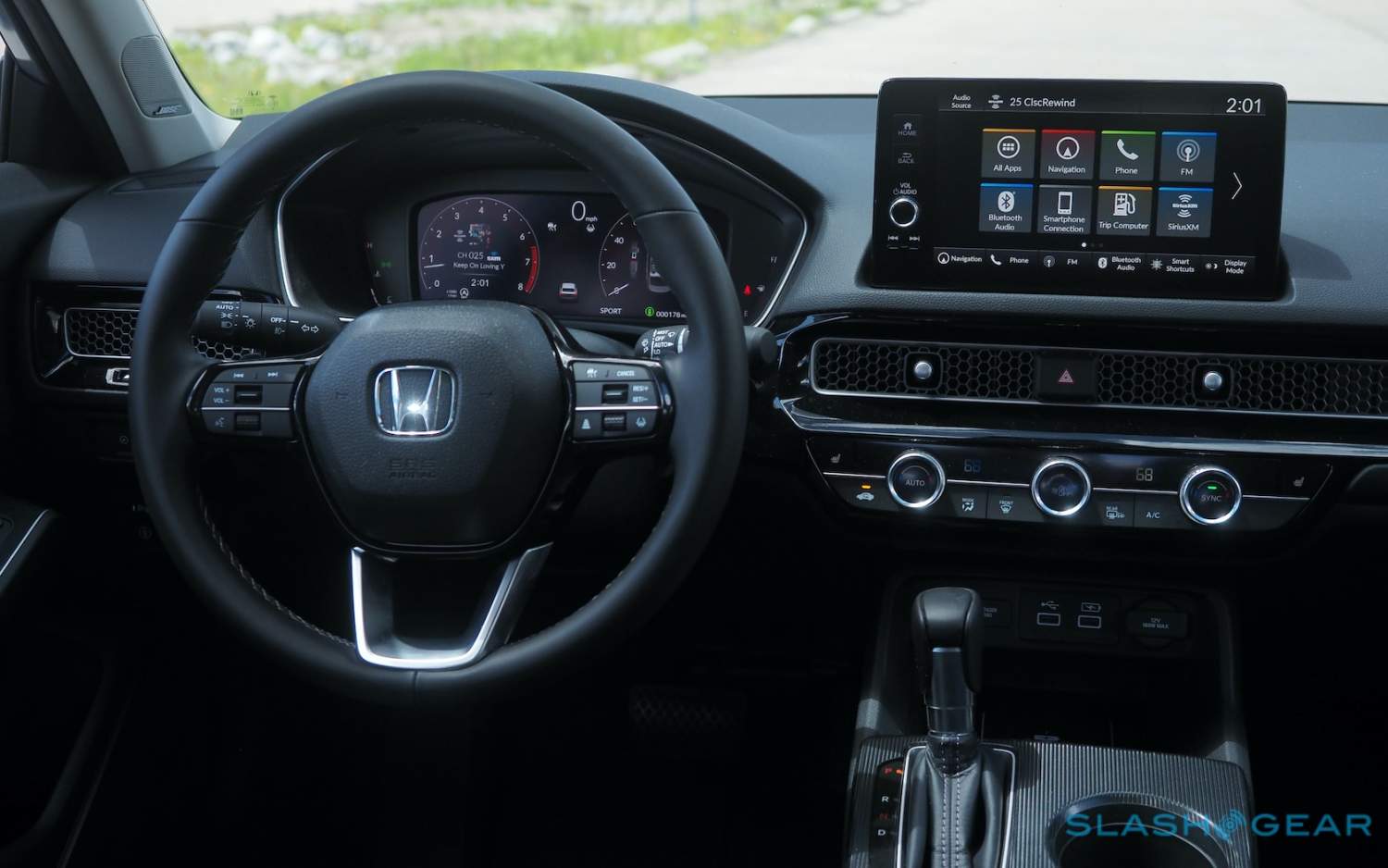 Honda calls it “elegance through simplicity” and the core recipe is straightforward. More horizontal lines, a clever use of materials, and a renewed focus on the touchpoints you come into contact with most frequently. The honeycomb panel that runs the width of the dashboard, for example, is real metal; the joystick-like knobs that emerge from it, to control the hidden vents, feel solid and tactile. Better still, they’re vastly more intuitive to actually use than what you’ll find in most rivals.

It’s a pragmatic approach, too. The trim panels around the door and center console switchgear is textured to avoid picking up fingerprints, rather than swathes of glossy black plastic or faux-wood, and Honda says it was careful to make all the surfaces clean and broken up with as few cutlines as possible, thus keeping reflections to a minimum. The plastics feel solid and sturdy, and things like the HVAC knobs have a pleasing weight to them. 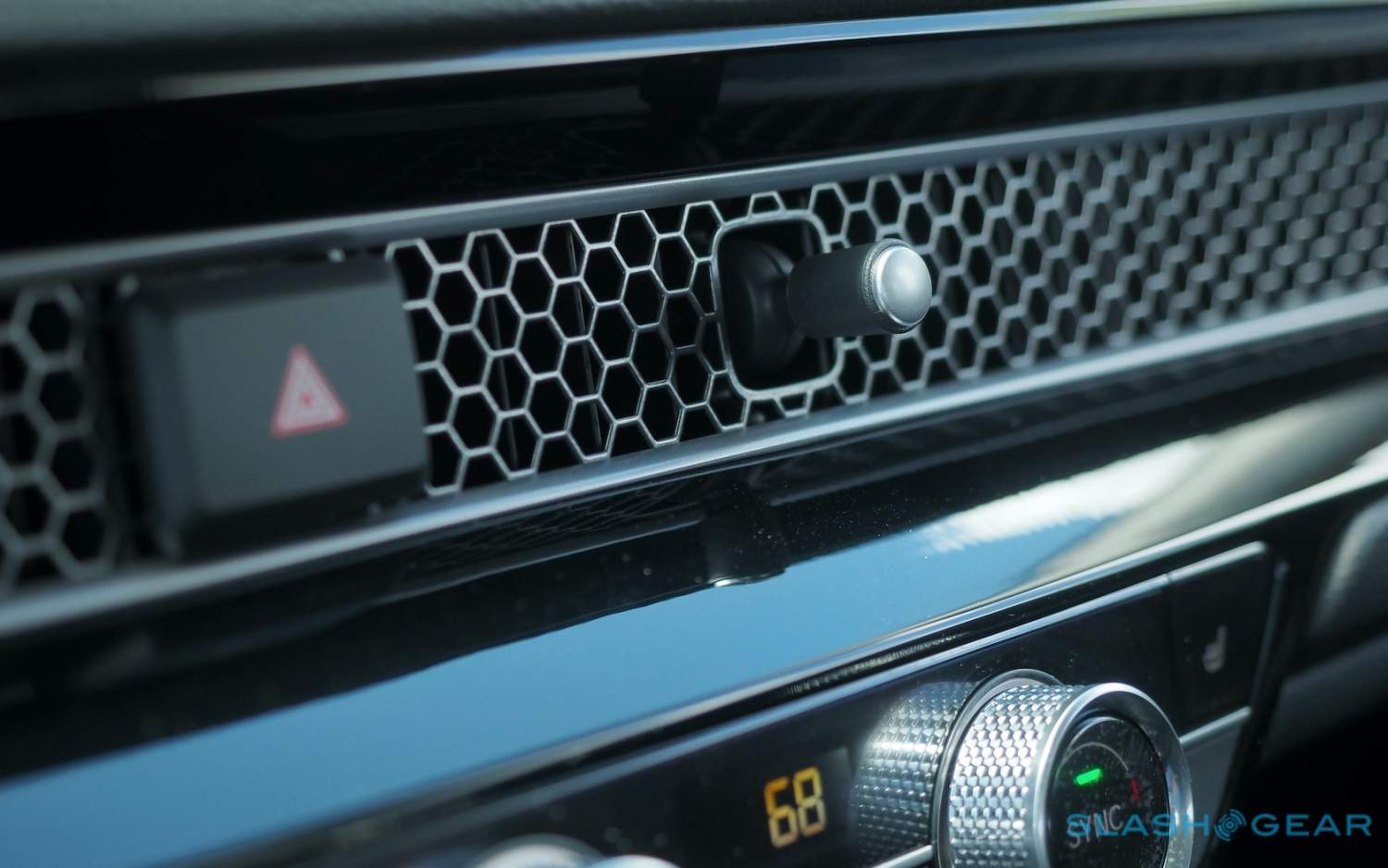 Sitting on top is the infotainment touchscreen, 7-inches on LX, Sport, and EX trims, and 9-inches – Honda’s largest ever, indeed – on the Touring. There’s a new UI, too, with simplified menus and a faster processor; it’s a welcome improvement over the old, slightly blocky interface, which could be just that little bit sluggish day to day.

The frustration is that, if you want the bigger screen, you need to upgrade to the 2022 Civic Sedan Touring: Honda won’t sell it as an option on the other trims. It’s not just about screen size, either, since while both systems have Apple CarPlay and Android Auto, only the bigger-screen version supports wireless connections. 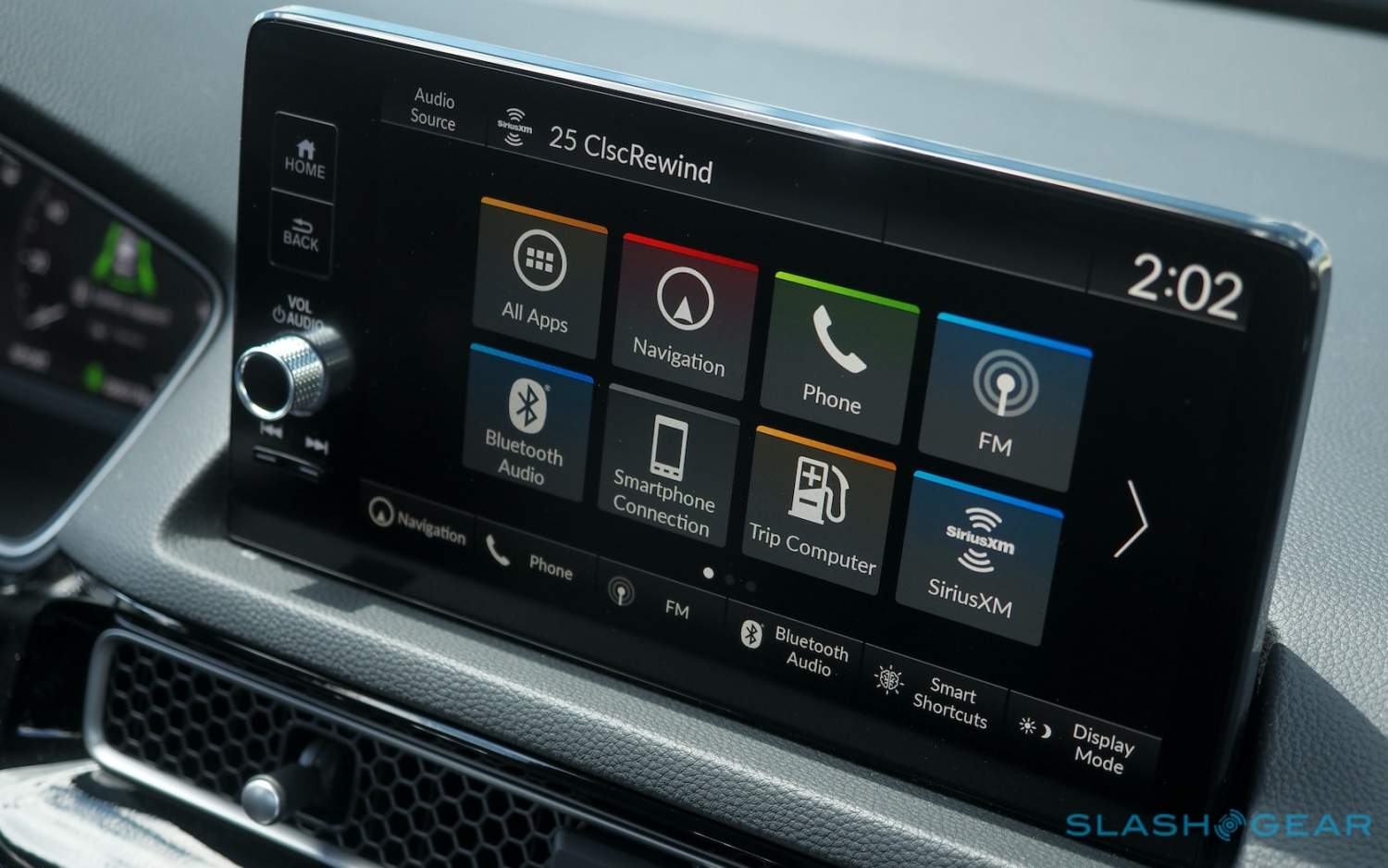 In contrast, the 7-inch touchscreen still expects you to use a cable and it lacks the Touring’s Qi wireless phone charging pad, too. Similarly, only the Touring trim gets the new Bose 12-speaker audio system – another first on a Civic, and featuring the company’s Centerpoint 2 technology – and the fully-digital 10.2-inch driver display. The rest make do with a 7-inch screen there, alongside analog gauges.

Safety, at least, is consistently good across the board. Honda Sensing is standard, now switching to a camera-only forward-facing system rather than the old camera/radar hybrid. Honda says that improves range, field of view, and consistency, though we’ll have to wait for some inclement weather to arrive to see how well the tech handles poor visibility. 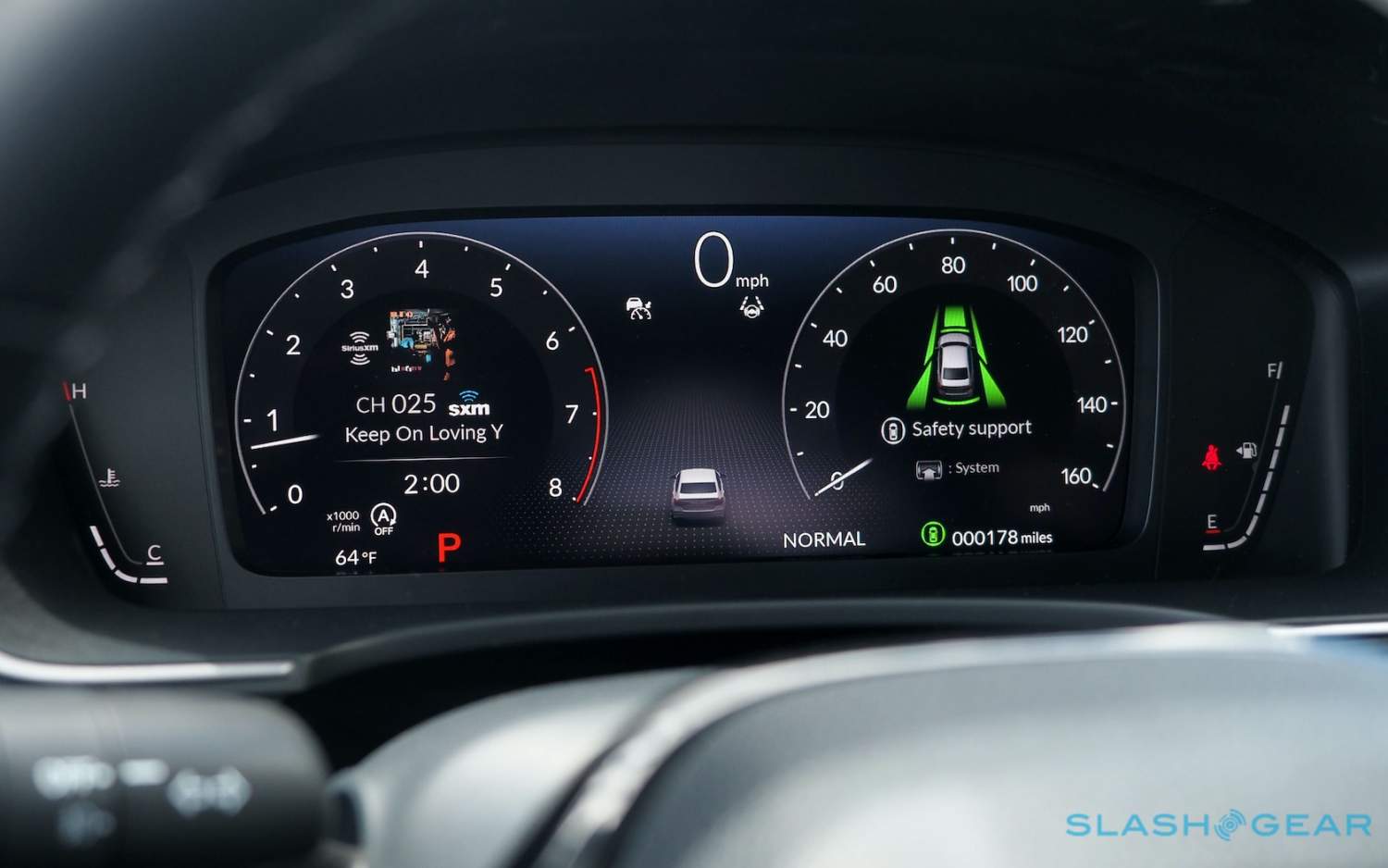 As for economy, numbers range depending on engine and trim. Best is the EX, with 33 mpg in the city, 42 mpg on the highway, and 36 mpg combined; the Touring manages 31 mpg city, 38 mpg highway, and 34 mpg combined. 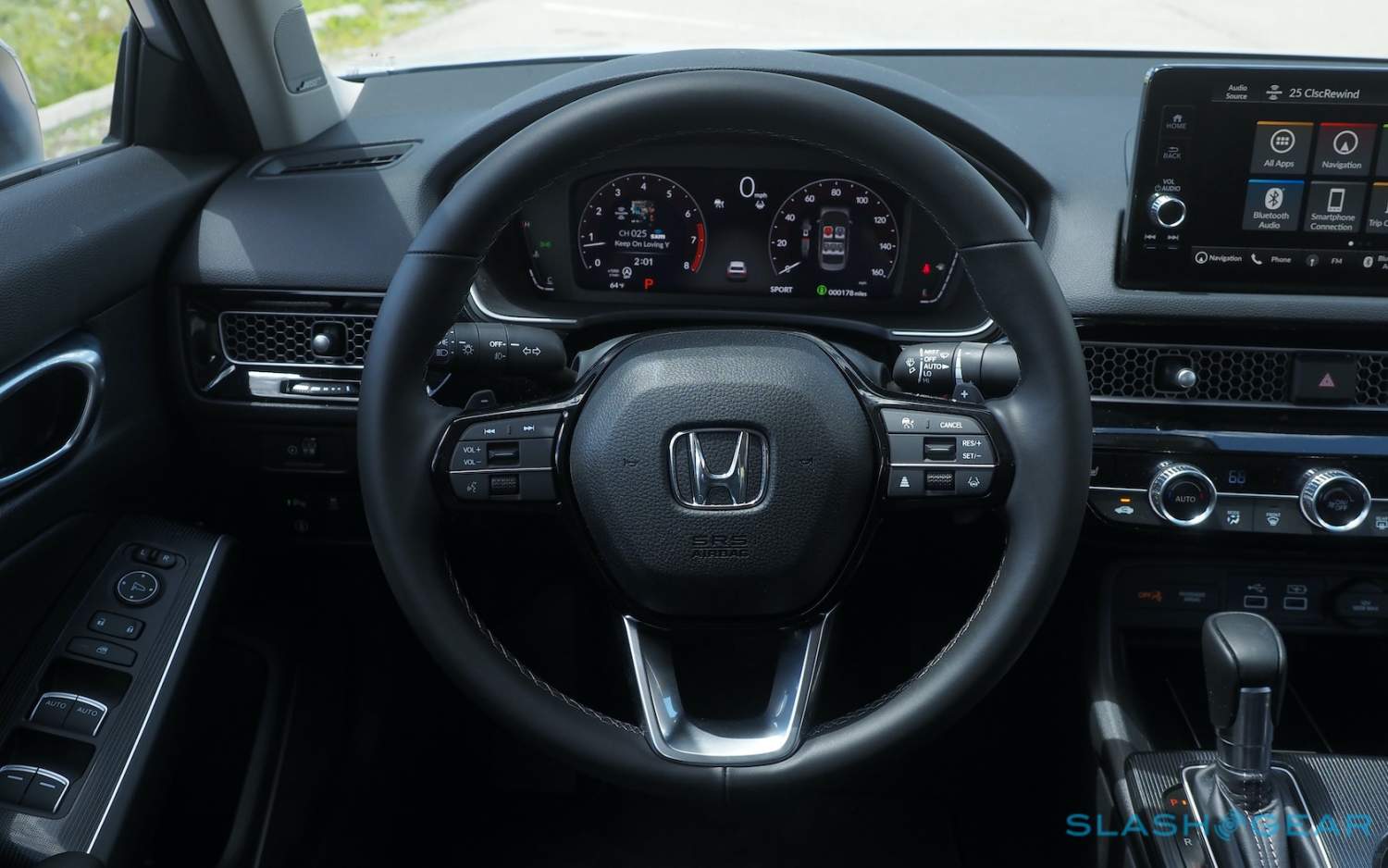 They’re decent figures, but it’s getting harder with each new Honda to overlook the conspicuous absence of electrification among the powertrain options. The automaker is saying all the right things, and even has decisive commitments to going all-EV in North America from 2040, but right now you can’t even get a Civic mild hybrid.

It’s what Honda puts under the hood that I keep coming back to. In so many ways, the 2022 Civic Sedan is an astonishingly complete car: good looking, distinctive and cohesive inside, well-equipped and rewarding to drive. I’d recommend the turbo engine if your budget stretches, and the Touring has the best toys, but the more affordable trims don’t feel conspicuously compromised or lacking. 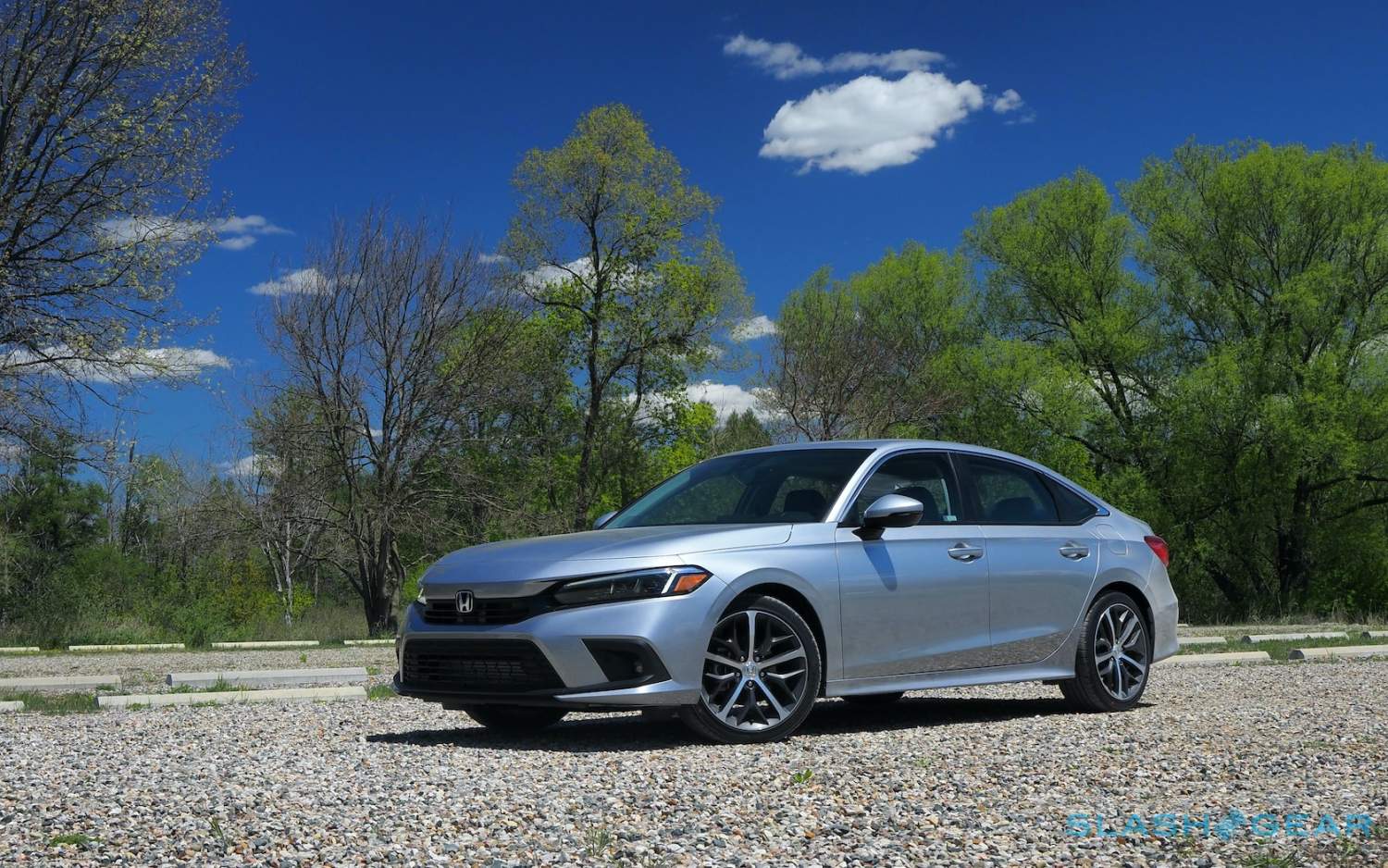 Honda, then, has done just what it set out to: make a great new Civic. The problem is that, for now at least, the new Civic it has made ignores electrification completely, and that seems myopic to the point of intentionally obtuse. The new car could’ve been a gateway not only to the Honda family but the electric Honda family.

The fact that it isn’t is, quite frankly, a missed opportunity. One I hope Honda corrects sooner rather than later, because I suspect the Gen Z shoppers it’s courting will be looking for electrification too. The 2022 Civic Sedan feels thoroughly modern in so many ways, and it leaves me legitimately excited about the rest of the 11th generation line-up still to come, but good as its gas engines are they feel like Honda played it safe amid its otherwise bold decisions.