If high-output gas engines are facing their gradual curtain call at the hands of electrification, the 2021 Mercedes-AMG GT Black Series is going out with a howl. Fiercest of the tuning division’s Black Series, it’s a 720 horsepower track-ready, road-legal monster GT where excess comes as standard. It’s also a reminder of what AMG has traditionally done best – and that big changes are fast incoming.

As with AMG’s most extreme cars, the AMG GT Black Series uses a handcrafted V8 engine – the builder’s name featuring proudly on the cowl – here tuned for 590 lb-ft of torque. It’s rear-wheel drive, with a seven-speed dual-clutch AMG-SPEEDSHIFT transmission. 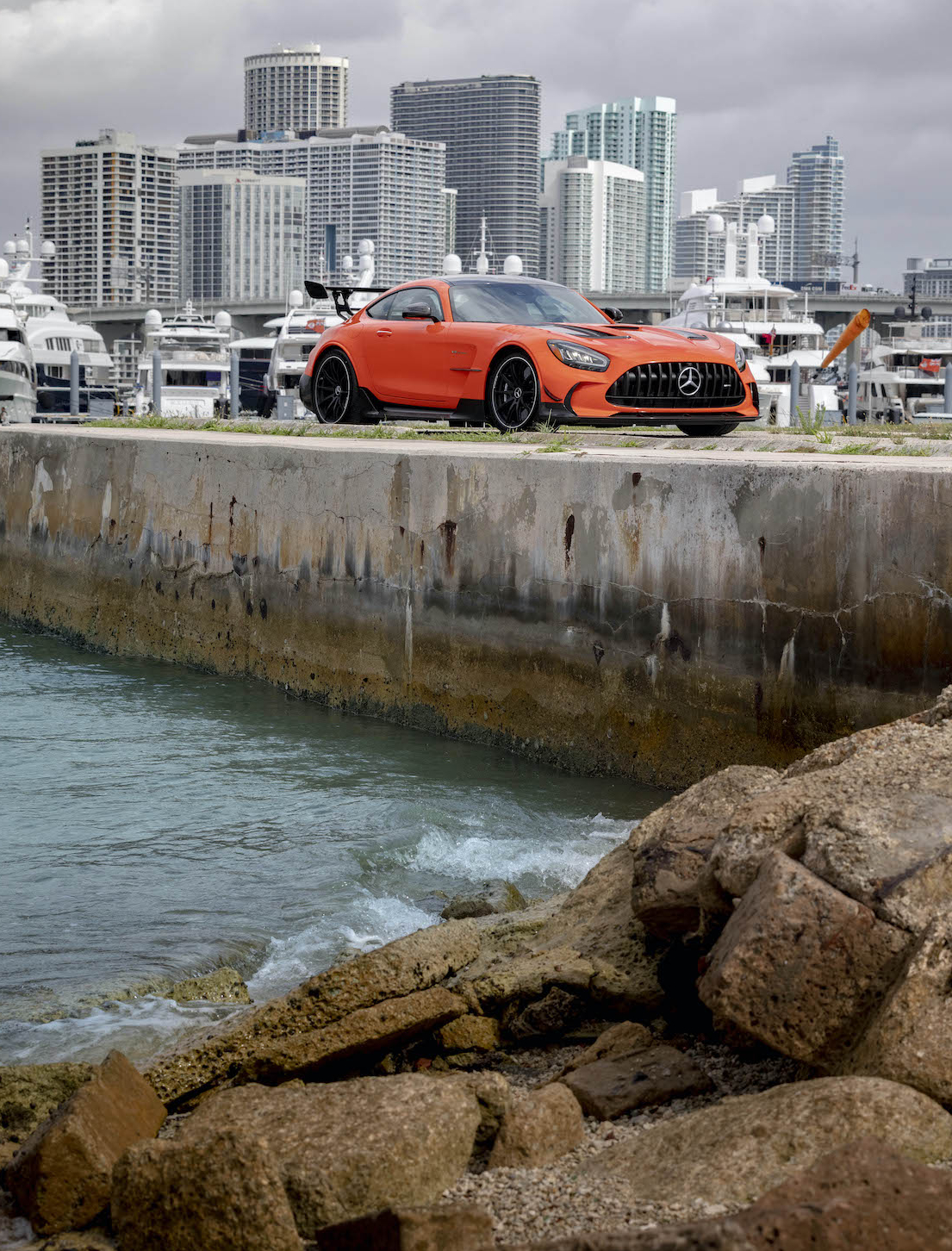 0-60 mph drops in 3.1 seconds, AMG says, and the top speed is 202 mph. It’s already proved its worth at the Nürburgring, setting a production car record there, though the course at The Concours Club in Miami, FL where AMG invited me out to try my hand is an altogether different track. Tighter, with sharp hairpin curves and quick changes of direction; the handful of fast straights hardly give you time to reset before the next corner arrives. 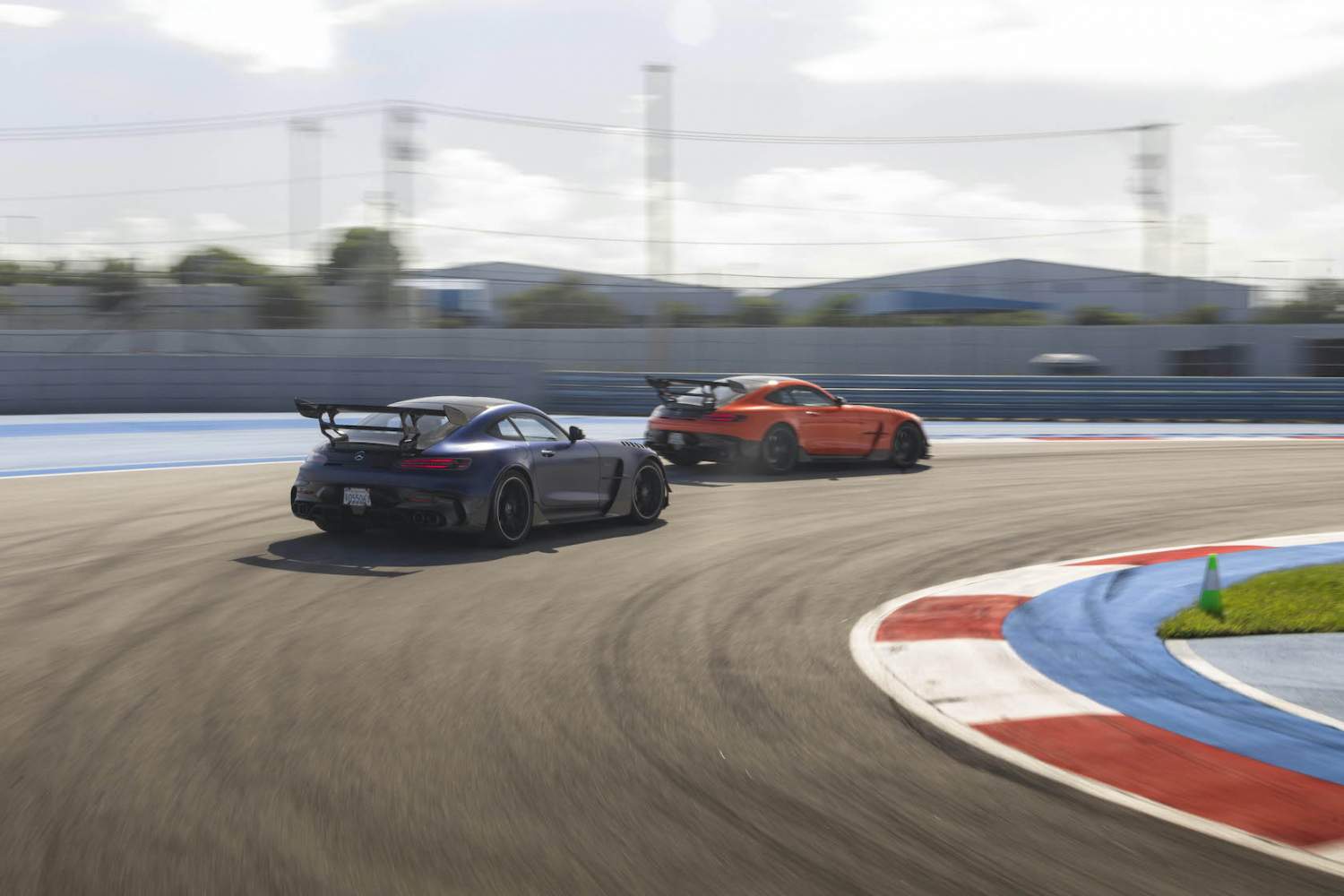 AMG doesn’t have one single secret weapon to make the GT Black Series fast, but the unique crankshaft certainly helps. Redesigned to make it lighter, the flat plane trims out some of the balancing mass from the old version. That not only helps with the coupe’s overall diet, but improves throttle response too.

Nobody could accuse AMG of being subtle with its styling. The AMG GT Black Series looks every bit as fast as it is, but as with the best performance cars the form absolutely follows the function. 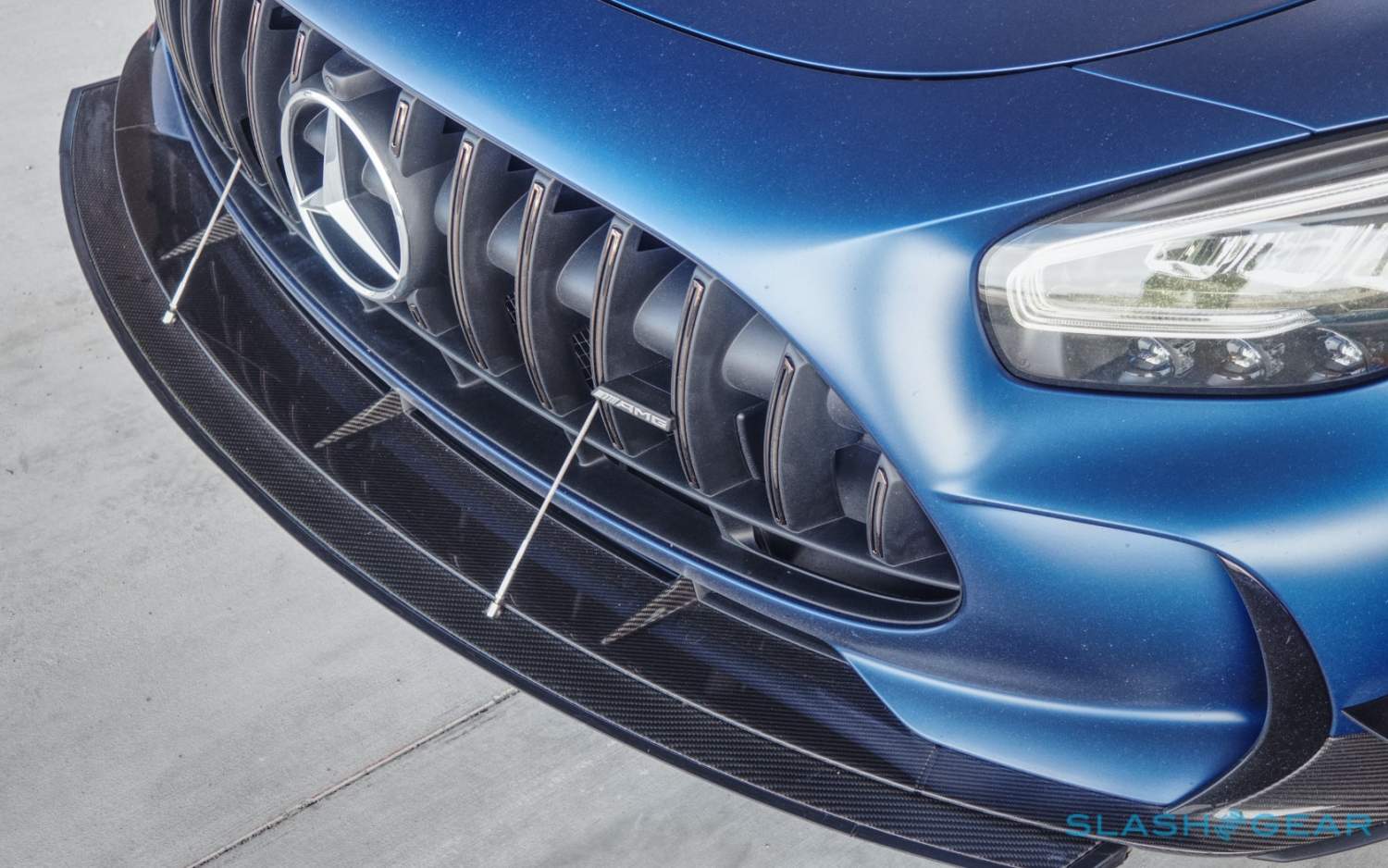 The regular GT isn’t exactly retiring, all priapic snout and bulging rear haunches. For the GT Black Series, even more carbon-fiber is added to the mix, along with some strong GT3 race car cues.

What you can’t miss, of course, is the new rear wing. Or, more accurately, the twin rear wings: stacked one atop the other, with the normal GT coupe’s far smaller rear spoiler looking positively coy underneath. The lower of the two new wings is manually adjustable; on the upper section there’s an electronically-adjustable flap which will automatically pivot to different degrees depending on the current drive mode. 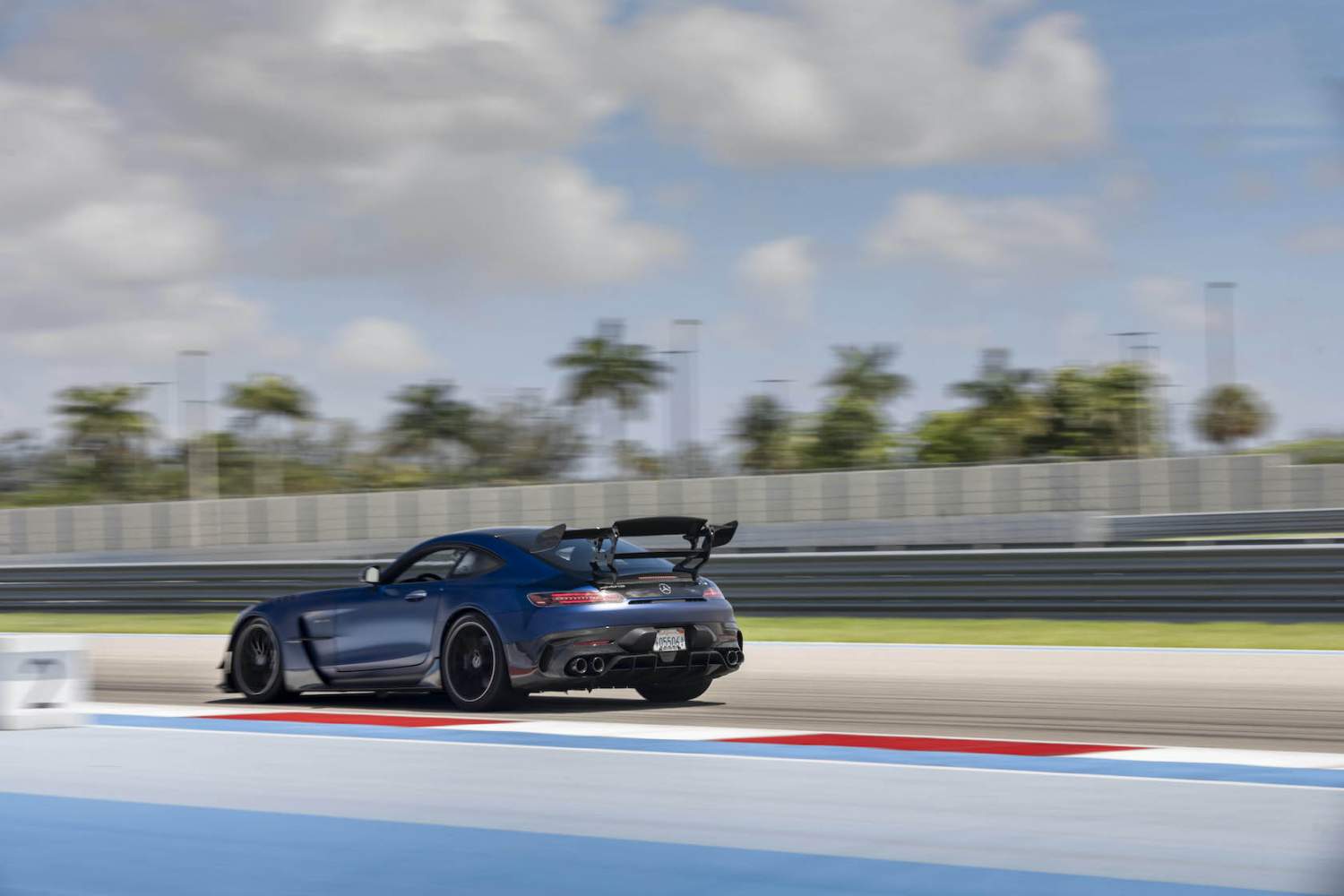 In “Master” mode, for example, it fully extends to deliver maximum downforce. Only when – if – you hit 155 mph will it deign to retract, trading grip in deference to outright speed. With all the various aero at play, there’s a whopping 882 lb-ft of positive downforce generated.

Even before the most extreme settings, though, the result is a coupe both fearsomely fast and unexpectedly forgiving. There’s a sense, with some performance cars, that they barely suffer the merely average driver. Do something even vaguely approaching silly, like braking at the wrong point in a turn or stabbing at the gas inopportunely, and they will reward you with the embarrassment (and potential repair bill) of spinning out or at the very least some tail wagging. 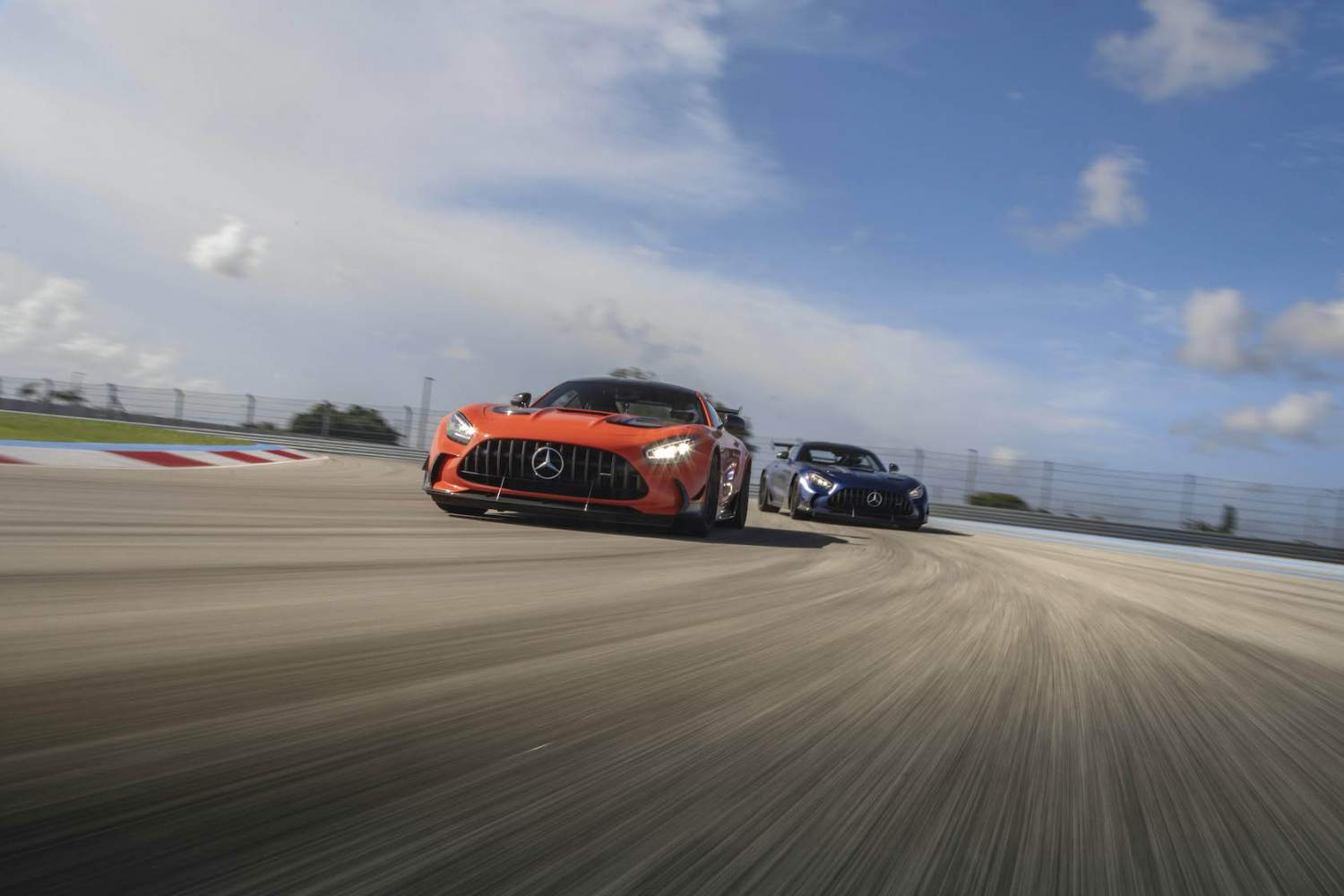 The AMG GT Black Series, though, has a Germanic need to provide assistance. Sure, it’s exceptionally powerful and a bonafide weapon in the hands of a pro-driver, but it’s also unexpectedly accommodating. Want to stab on the throttle a little earlier coming out of a turn? Sure, go for it; you’re not going to flick out. Screw up your line? No problem, the combination of sheer grip and surreptitious electronics have you covered. Get a little too carried away with the gas and carry too much speed, too far into the next corner? Somehow, physics be damned, the AMG doesn’t seem to care.

What stands out are the brakes. Specifically, a vast AMG high-performance carbon ceramic-composite system with enhanced cooling, leaving absolutely nothing to chance. After all, there’s no such thing as overkill on the track. 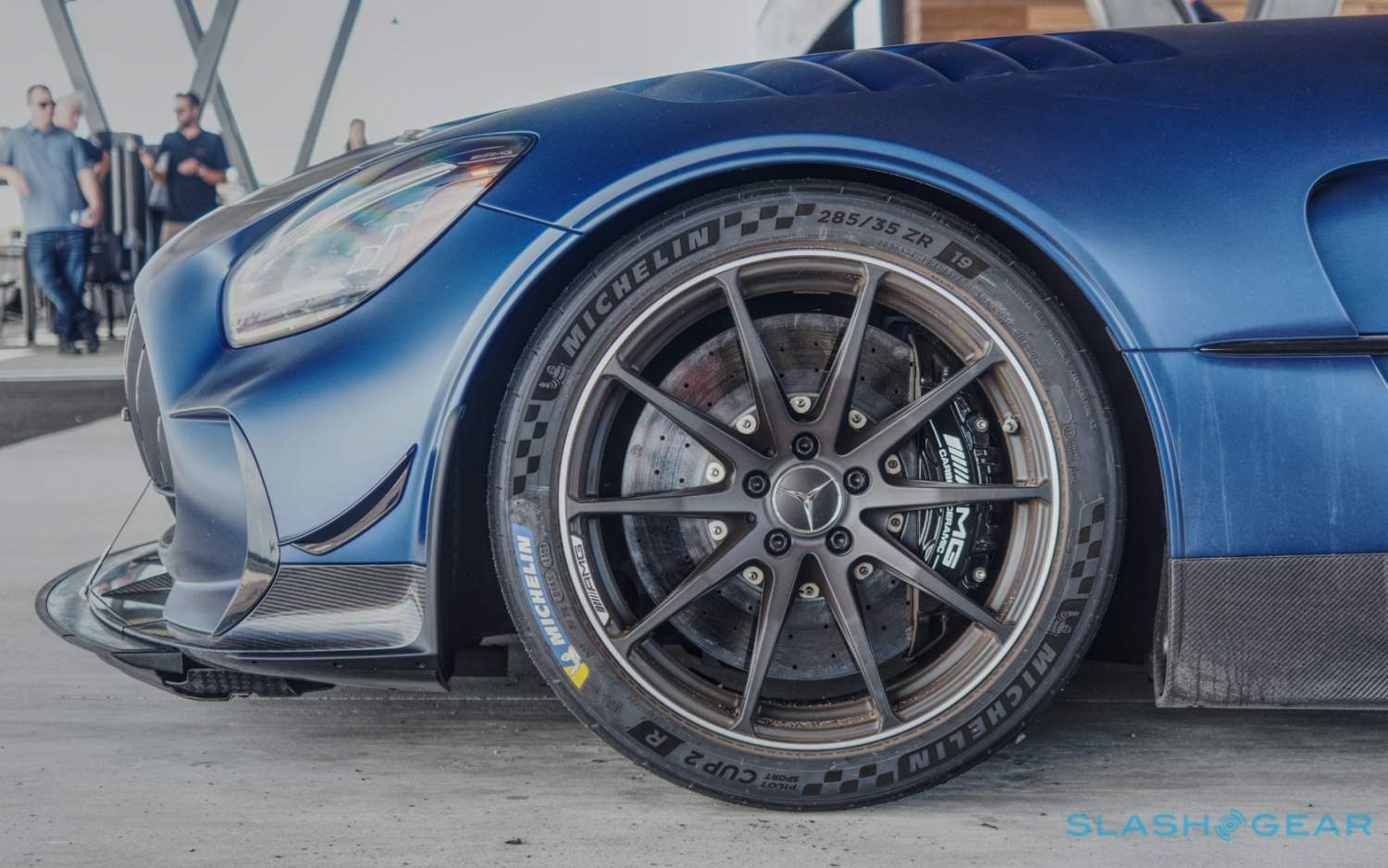 Going fast is fairly straightforward, new Mercedes USA chief Dimitris Psillakis pointed out later: “you just add more horsepower.” What makes the difference is how well you can modulate and manage that speed. Brakes you know you can rely on mean you can slow later and harder; take more advantage of those horses under the hood when the opportunity arises. It turns the AMG GT Black Series into the superlative all-rounder, not just a straight-line rocket.

I am, with some track time under my belt but nothing approaching proper training, an average performance driver. Nonetheless, after just a couple of familiarization laps it becomes abundantly clear that the AMG is more than capable of handling my rookie mistakes. It never feels tame – and nor would you ever want it to – more conspiratorial. There’s neither time nor need for recrimination at positioning or brake point goofs on an unfamiliar racecourse; it just tells you to keep on pushing. 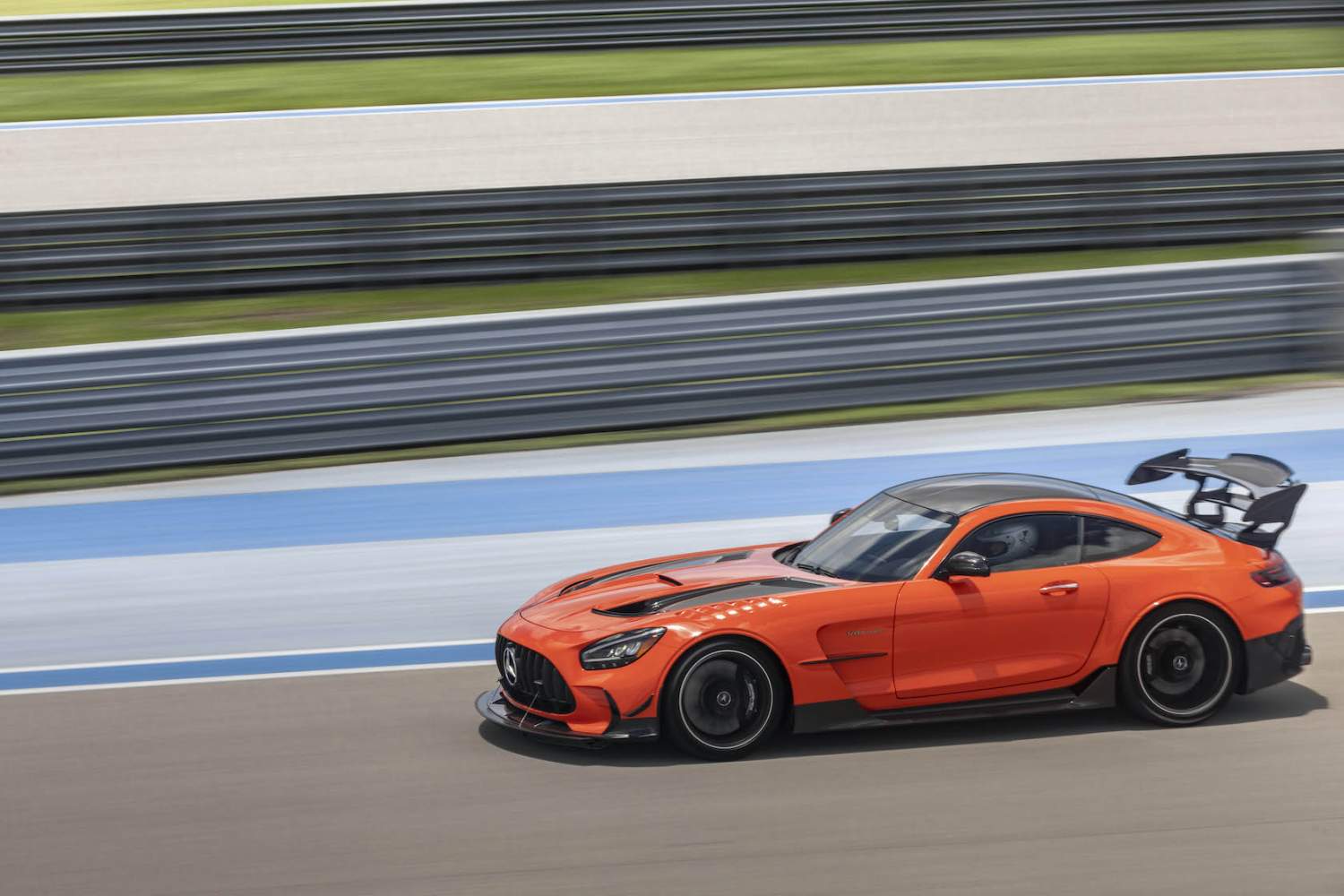 There are, if you feel so inclined and have the understanding, dozens of settings you can tweak to coax the very best out of the AMG GT Black Series. Like all modern AMG cars there are the usual drive modes – cranking up to Race at their most extreme – along with individual adjustment for suspension, ESC, traction control, and everything else. A new golden knob taking pride of place in the center of the dash tweaks traction levels when the ESP is shut off.

You can go wild with all that, or you can set the car to Race and simply get to driving. I suspect, dialed back, it would be oddly usable on regular roads as well. With only two of the cars currently in existence in the whole of the US, Mercedes was unsurprisingly not keen on the idea of my borrowing one to try it out on a Costco run, but assuming you plot a course with minimal curbs so as to avoid scuffing that all carbon fiber I think it would do just fine. 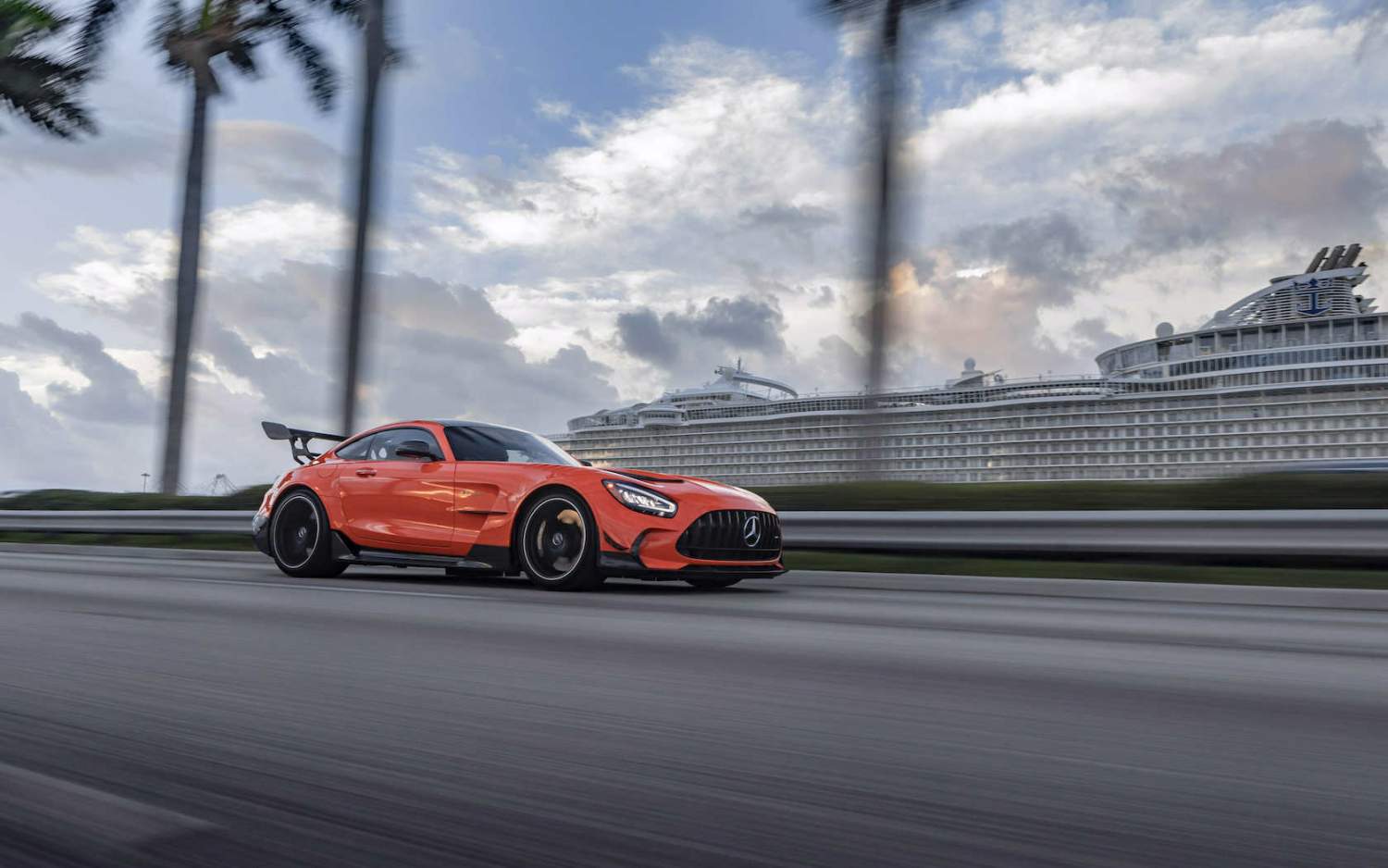 That is, of course, the magic of the AMG Black Series in general. More performance and more exclusive, naturally, but also a Mercedes with it. All the usual toys are in the cabin, along with perfectly trimmed sports seats. AMG may have removed weight but they haven’t gone spartan with it, even if the combination of successive lap after lap and 90+ degree Miami heat did leave the A/C compressor taking the occasional time-out. 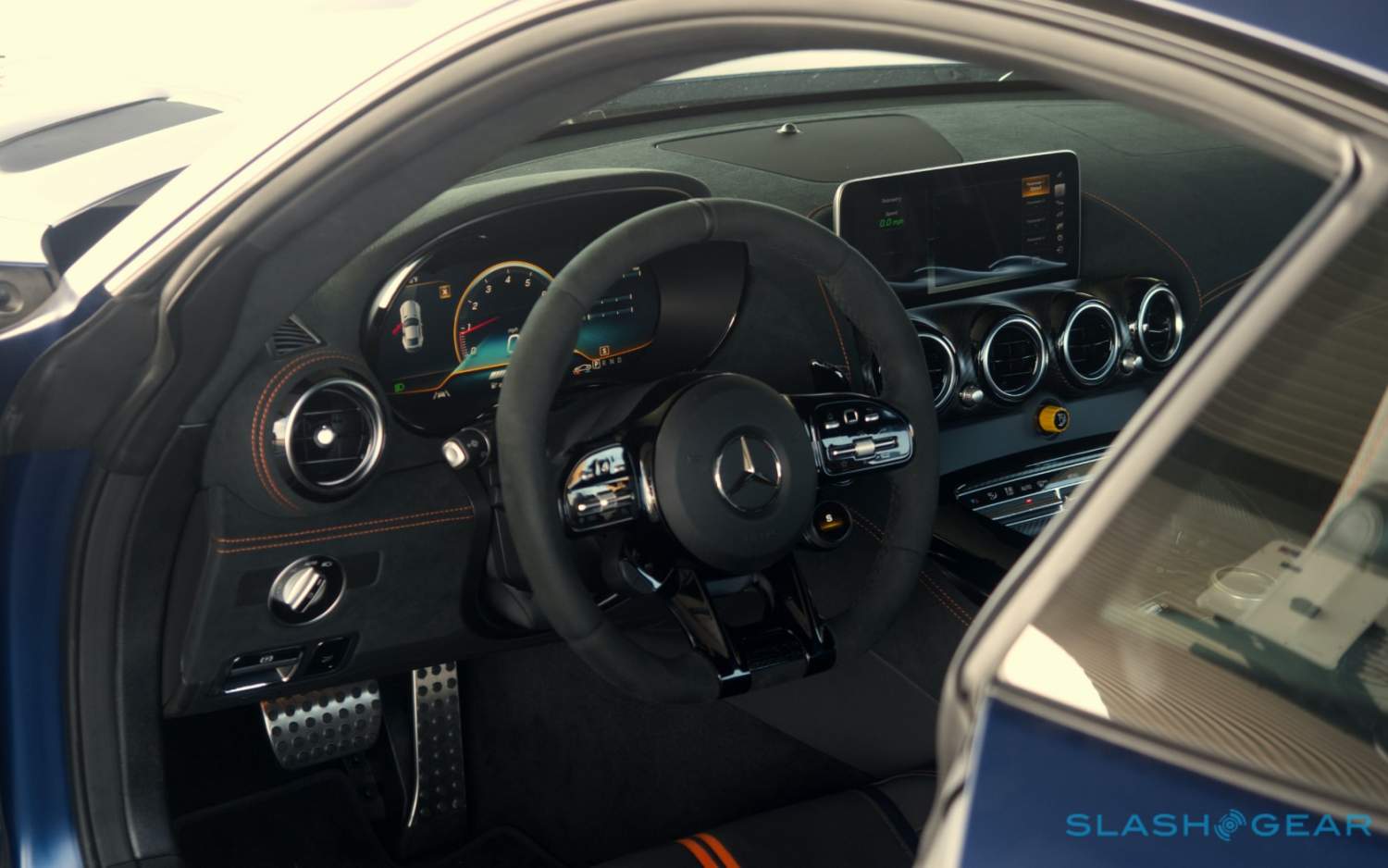 Production of the AMG GT Black Series is limited – Mercedes isn’t saying quite how many it’ll build – and only a portion of those will make it to the US. Despite strong demand, AMG says that there won’t be enough coming over for every one of its American dealerships to get a car. That means fewer than 389 or so, even if the exact number is a secret. 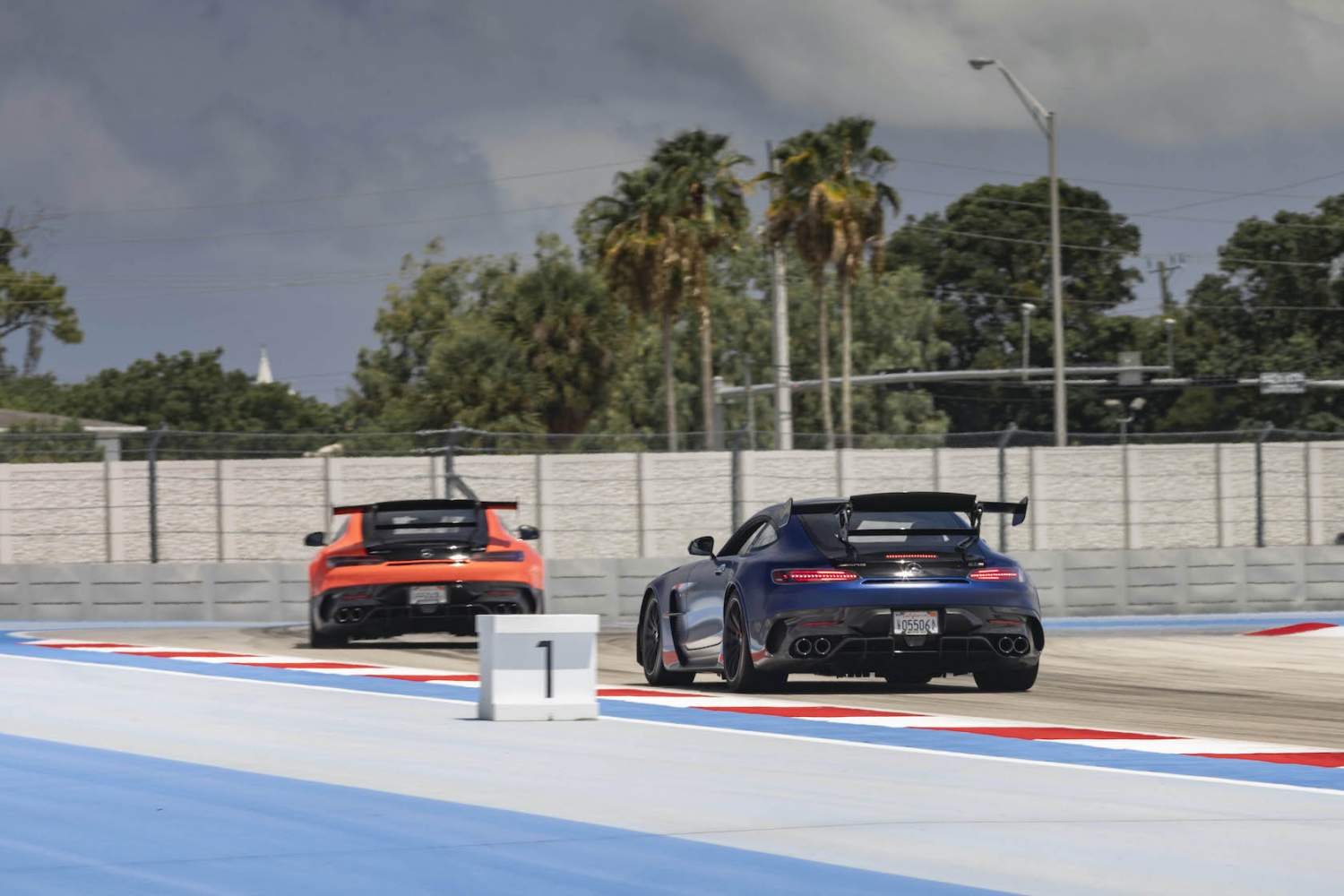 What comes next is a big question. AMG has already committed to electrification, both with E Performance plug-in hybrids that will deliver 804+ horsepower, and EQ all-electric performance EVs. On the one hand I can see purists getting worried and, certainly, those pure-electric cars will be a very different experience of speed compared to the growling, howling AMG GT Black Series when pushed hard.

Still, our first taste of that electrification does promise to be a little like having your cake and eating it. The AMG E Performance cars won’t ditch their V8 biturbo engines after all: they’ll just add to them with electric motors. With gas driving the front axle and electric for the back, you’ll get soundtrack and speed. 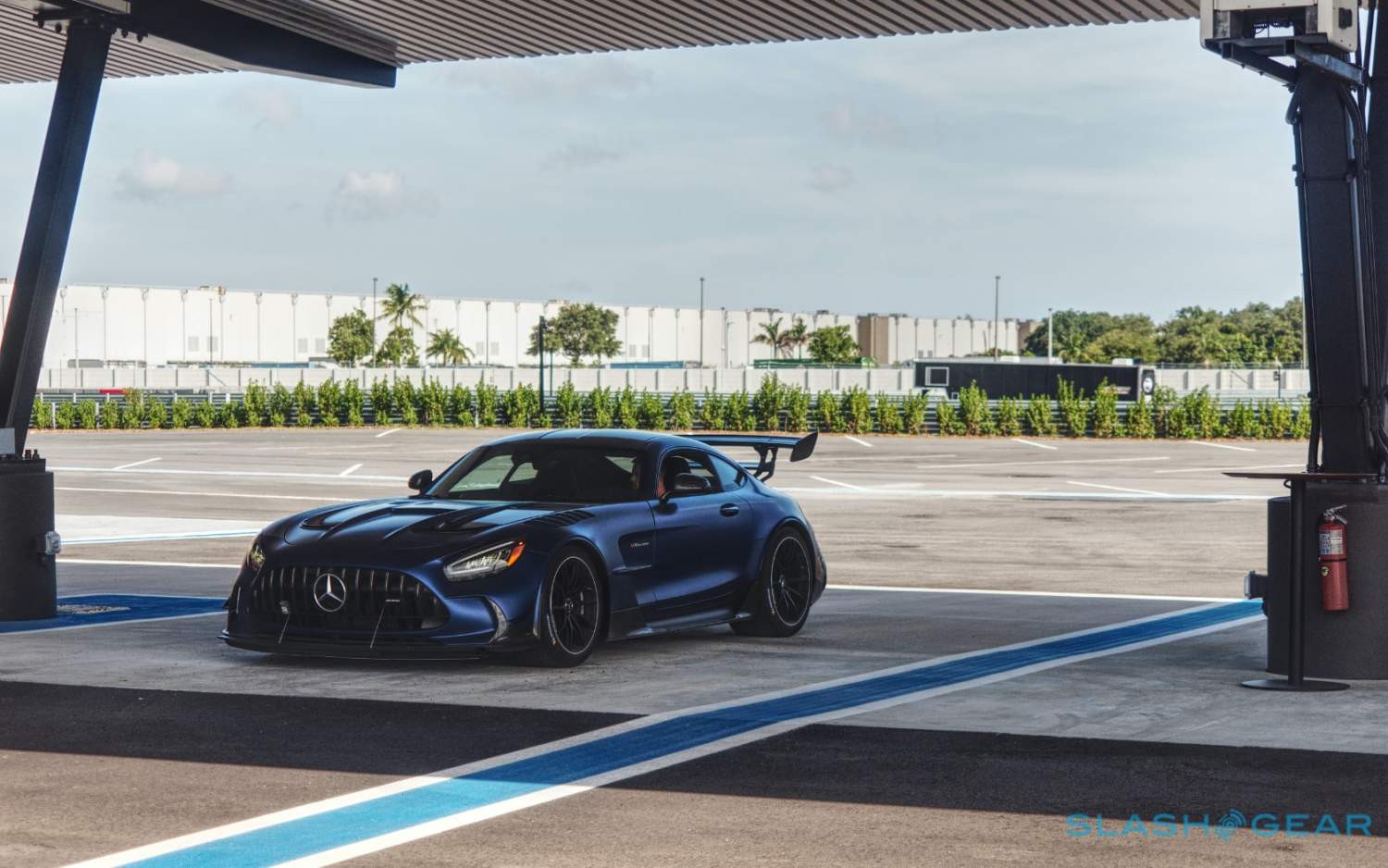 Even when the pure electric drivetrain is deemed sufficiently well-rounded for flagship status, though, I’m not sure we need be concerned. What the AMG GT Black Series demonstrates is that good driving is about more than just the engine.

Trade out the biturbo V8 for some performance electric motors and the same sort of aero, suspension, and general tuning polish that left me feeling so capable on the track, and – while it may not sound the same – I think the end result will be no less engaging. The heart of a sports car may be its engine, but the soul is a broader, more encompassing thing. This GT Black Series is fine evidence that AMG has more than enough of that to spare.