AMG is readying a new breed of all-electric performance vehicles, eschewing gas engines in favor of sports BEVs based on upcoming Mercedes EQ models. The strategy will operate in tandem with AMG E-Performance, the gas-electric sports hybrids which the automaker will also begin releasing this year for its most power-hungry owners.

Much as we’ve seen the AMG 43 and 53 series cars take standard Mercedes-Benz models and give them performance and styling upgrades, so too will the AMG all-battery-electric models follow the same strategy. In this case, they’ll be based on the EQ architecture, but redeveloped in AMG’s Affalterbach facility. 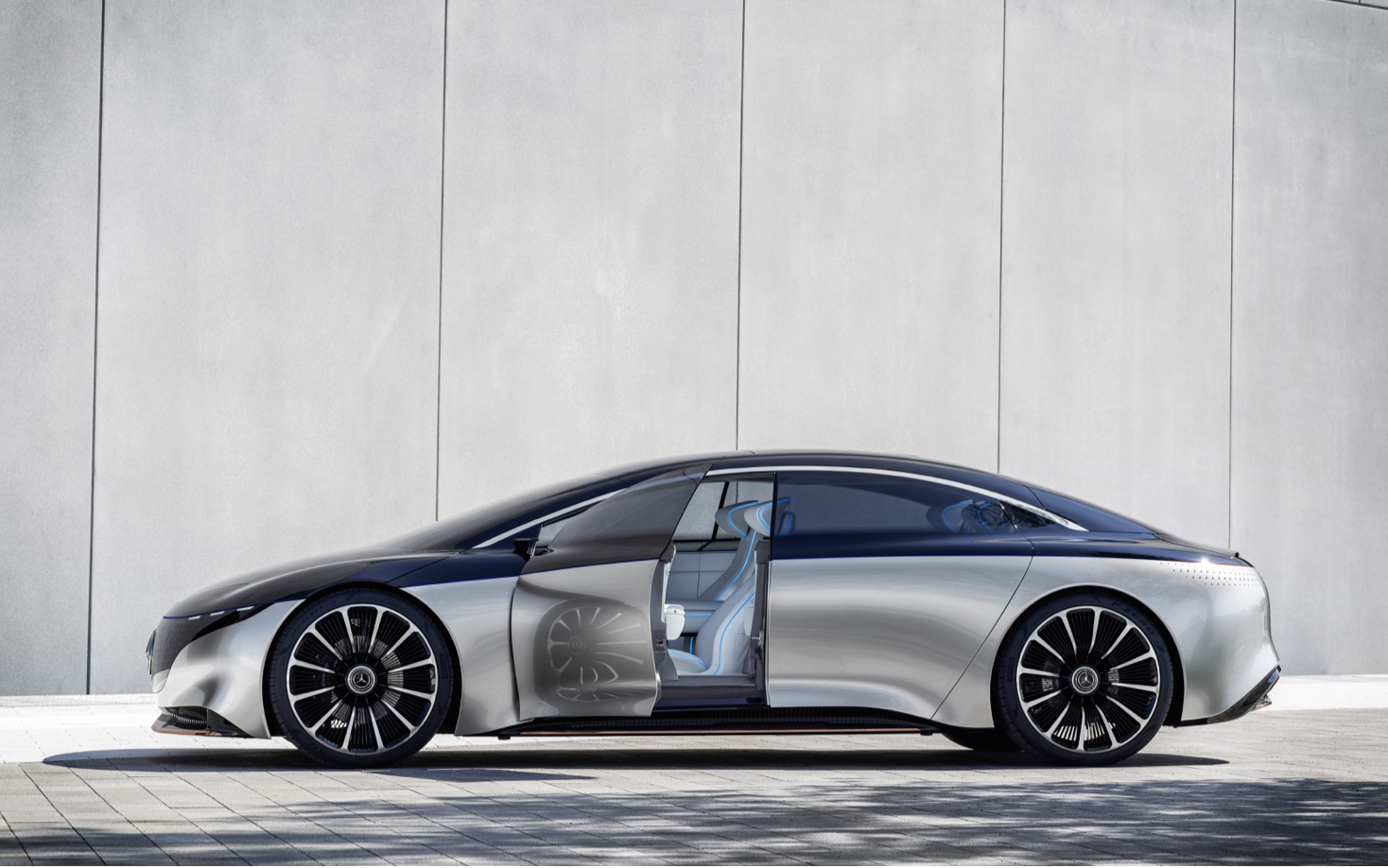 There, there’ll be a renewed focus on things like drive, chassis, brakes, sound, and exterior and interior design, with the AMG audience in mind. AMG will add its own unique radiator grilles with their distinctive vertical slats, along with redesigned front bumpers and side sill panels. There’ll also be an independent rear bumper design, with spoiler lip and diffuser.

Finally, the AMG EQ cars will get unique AMG wheels in Aero or Heritage designs. Turning to the inside, there’ll be special AMG seats with custom graphics, AMG-specific functions and displays for the MBUX infotainment, and an AMG Performance steering wheel with its circular controls for drive mode and more. AMG will also have a catalog of other options for those who want to make further tweaks.

Initially, the underlying architecture will be based on the same strategy of dual electric motors and e-AWD as the regular EQ cars will offer. That’ll rely on independent, permanently excited synchronous motors and fully-variable all-wheel drive with modular torque distribution. The motors themselves can rev up to 18,000 rpm.

As a result, we can apparently expect the sort of power that currently you’d need a 4.0-liter V8 biturbo for. 0-60 mph could drop in under 4.0 seconds, model depending, and top speed is up to an electronically-limited 155 mph. 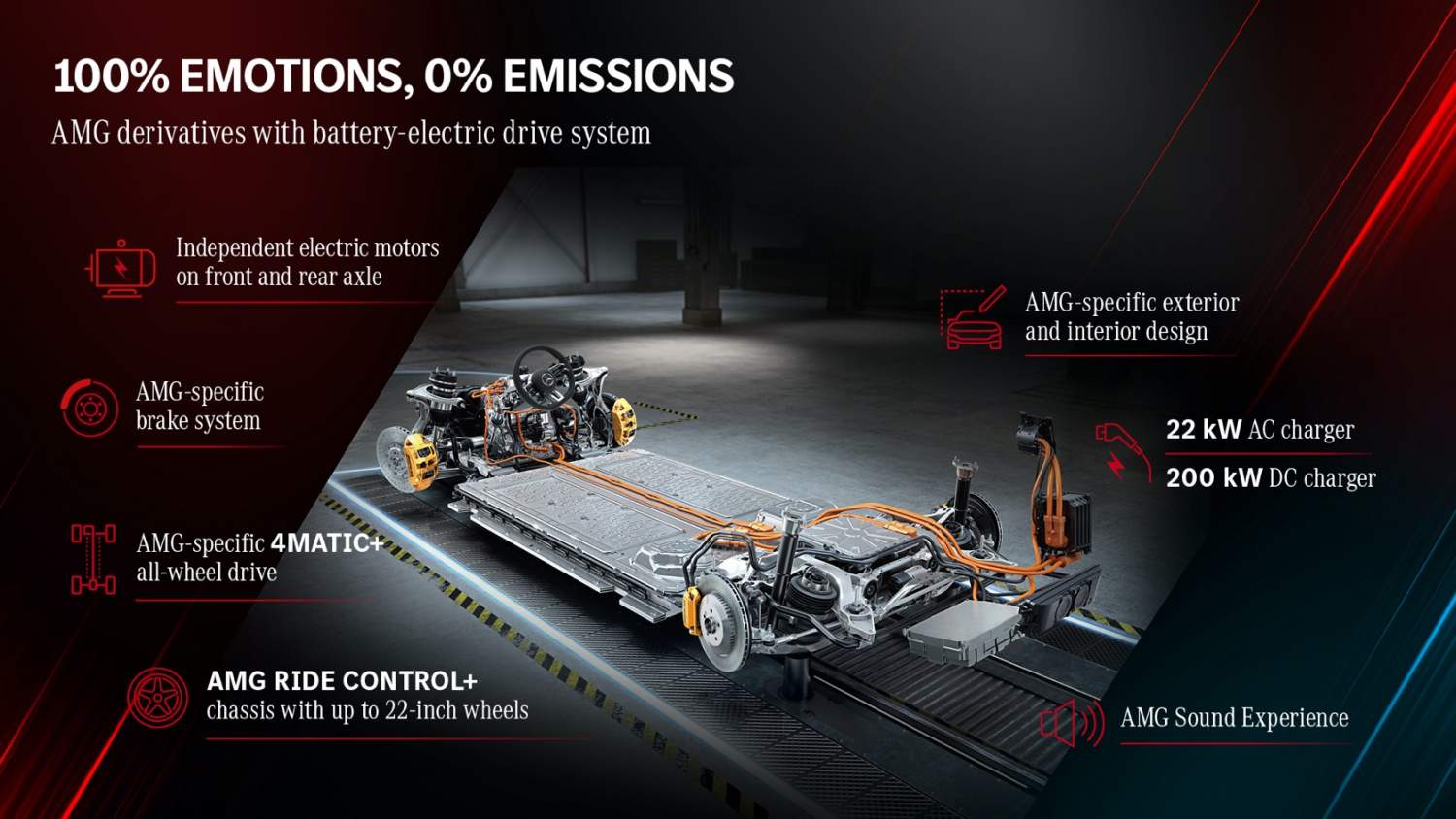 For power, there’s a 400 volt li-ion battery, with a custom AMG wiring harness to handle higher performance operation. It’ll support up to 22 kW Level 2 charging, and up to 200 kW DC fast charging.

AMG Ride Control+ air suspension gets tweaked, too, for better poise during aggressive driving. For slowing, meanwhile, there’s the electro-exclusive AMG i-Booster additional function, which AMG says combines both recuperation – to pump power back into the battery – and traditional hydraulic braking for maximum deceleration.

Finally – and probably most controversial – there’ll be emphasis on the sort of sound people expect from their AMG. That includes adding extra speakers, a “shaker,” and a sound generator, to deliver a newly-composed “AMG Sound Experience” soundtrack. We’ll get to hear what that sounds like, exactly, when we see the first of the AMG EQ BEV models later this year.