The new 2021 Ford Bronco Sport is not the new Ford Bronco, a faintly odd sentence you find yourself saying fairly frequently in parking lots and at traffic lights when you’re driving a bright red Badlands trim example. Blame until-now-untapped enthusiasm for the Bronco brand and the high profile resurrection of the nameplate this year – oh, and Ford’s massive “BRONCO” lettering across the grille – for that, and get used to some staring.

The “true” new 2021 Bronco arrives later this year, but to tide us over there’s the 2021 Bronco Sport with some of the styling, some of the cachet, and some of the off-road talent. At least, that’s Ford’s big pitch for what you could, cruelly, describe as an Escape crossover playing dress-up as a Weekend Warrior. 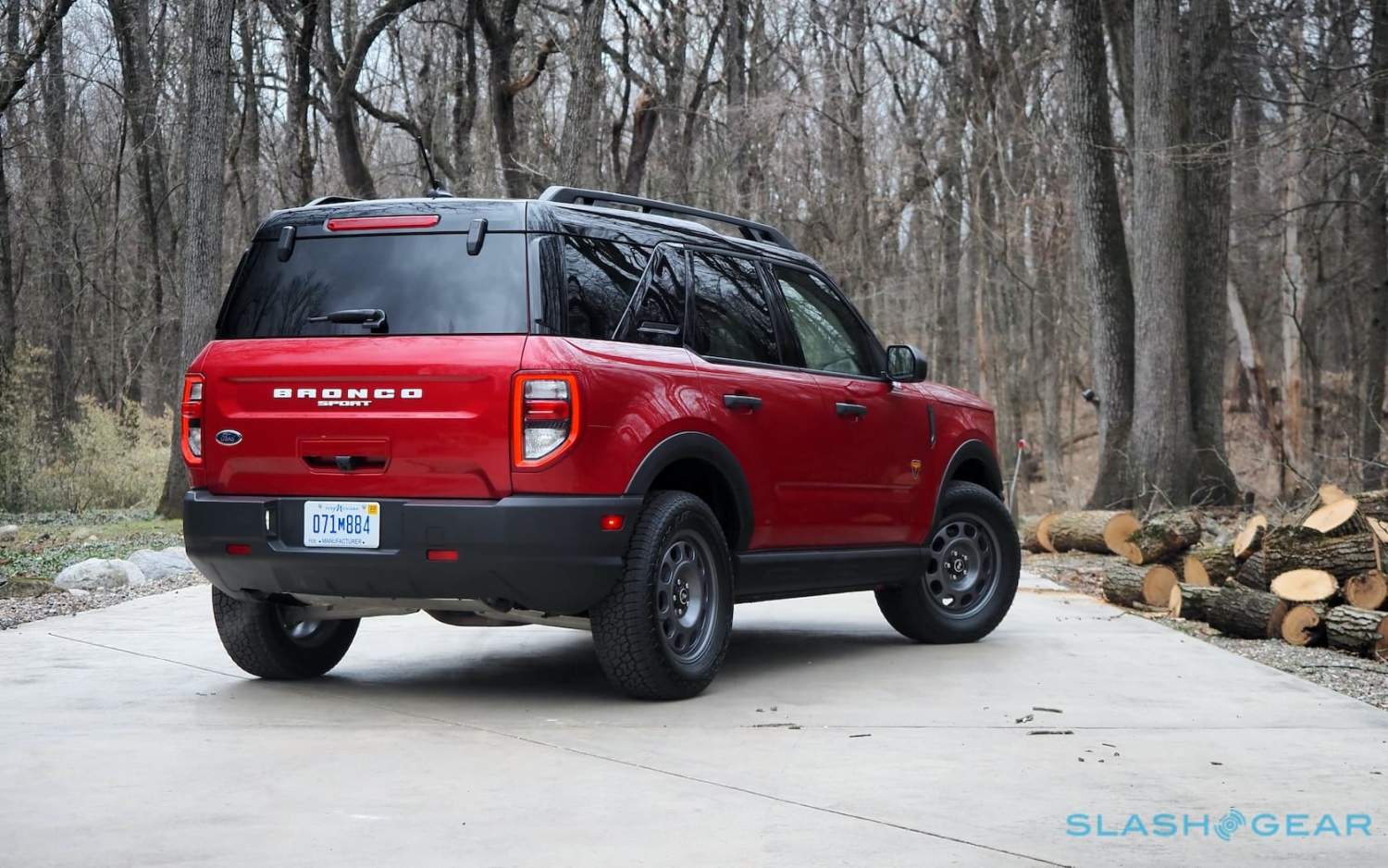 Certainly, the Bronco Sport and its Escape cousin share some guts. Ford’s C2 platform is underneath – meaning the baby-Bronco also has DNA in common with the Lincoln Corsair – and familiar engines are under the hood. You can have the Bronco Sport with the 1.5-liter EcoBoost turbo three-cylinder engine with 181 hp and 190 lb-ft of torque, or step up to the 2.0-liter four-cylinder version with 245 hp and 275 lb-ft. Either way there’s an 8-speed automatic transmission. 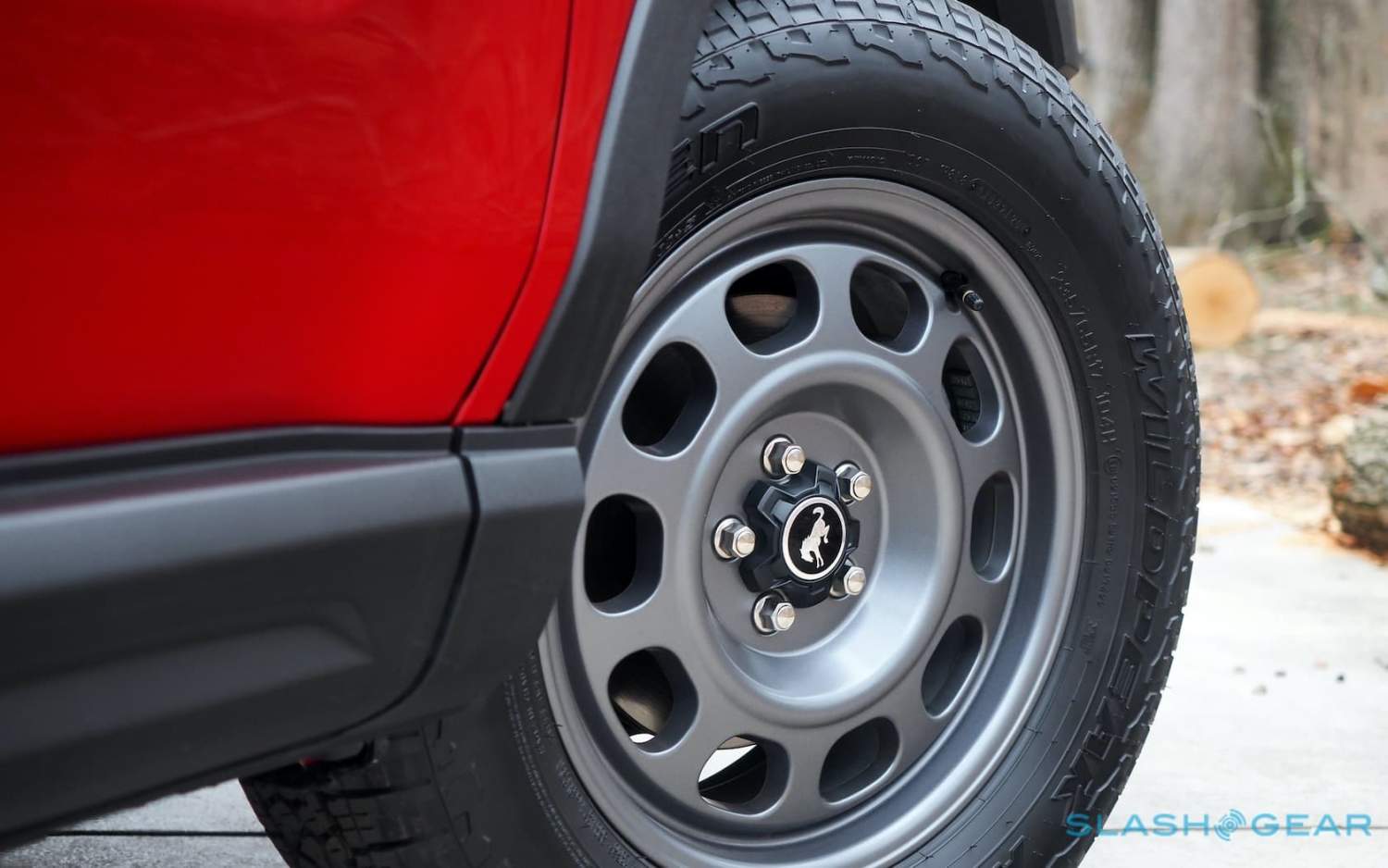 The bad news is that, unlike with the Escape, there’s no hybrid engine option. The good news is that 4×4 AWD is standard on the Bronco Sport, rather than optional as on the crossover.

In fact there are two 4×4 systems. Most Bronco Sport models get a version of the Escape’s AWD with programming nudged in an off-road direction. The Badlands trim – that I reviewed – gets a twin-clutch rear differential, with torque vectoring and a differential lock. That can push all of the engine power to one of the rear wheels, should you find yourself in a particularly tricky situation.

My colleague Vincent had already been left impressed by just how capable the Bronco Sport actually is in off-road situations (much to, quite frankly, his surprise). Badlands trim gets a suspension lift – raising ground clearance from 7.9- to 8.8-inches – and boosted dampers, too, and adds Mud/Ruts and Rock Crawl to the five drive modes – Normal, Sand, Slippery, Sport, and Eco – in Ford’s G.O.A.T. (Goes Over Any Type of Terrain) terrain management system. 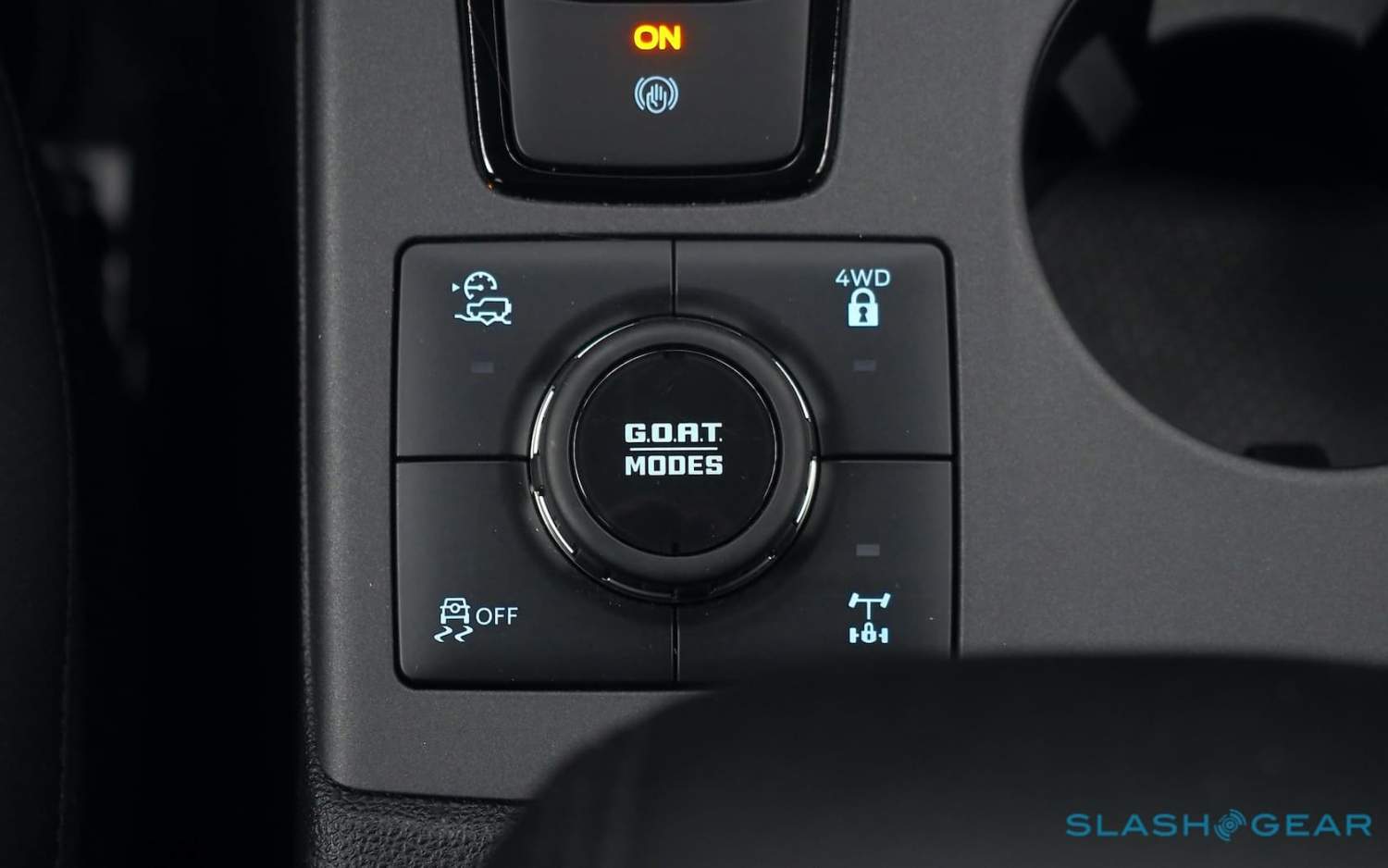 You access that with an easily-twiddled knob in the center console, surrounded by chunky buttons for the 4WD lock and other features. The whole Bronco Sport cabin keeps to that burly, glove-friendly off-road feel too. Knurled rubber knobs, big HVAC controls, and a generally clean layout add up to a dashboard with some personality. Sure, not all of the plastics are the same soft-touch that Ford has used judiciously, but it works well both aesthetically and practically, with no shortage of cubbies (with grippy rubber linings). 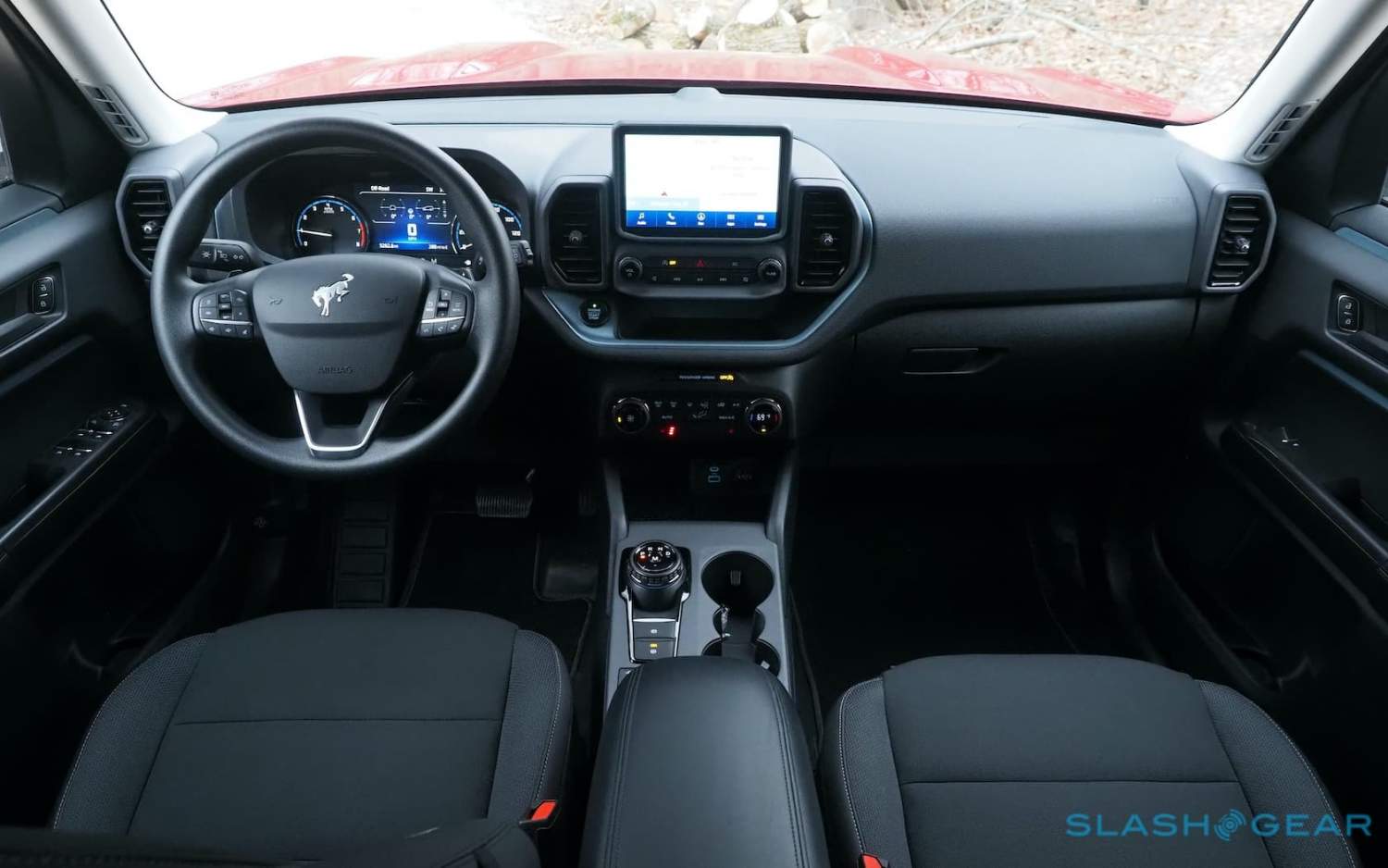 Indeed, the Bronco Sport is full of thoughtful features. The separately hinged rear-glass was useful for dropping in bags of shopping in tight parking lots while the front 180-degree camera, though intended to help you squeeze through perilous mountain passes, proved just as handy at avoiding curbs. Ford Co-Pilot360 is standard across the board, with pre-collision assist with automatic braking, lane-keeping, blind spot warnings, and auto high-beams. Upper trims get Trail Control, which is basically low-speed cruise control for off-roading, and adaptive cruise control with lane centering for the highway. 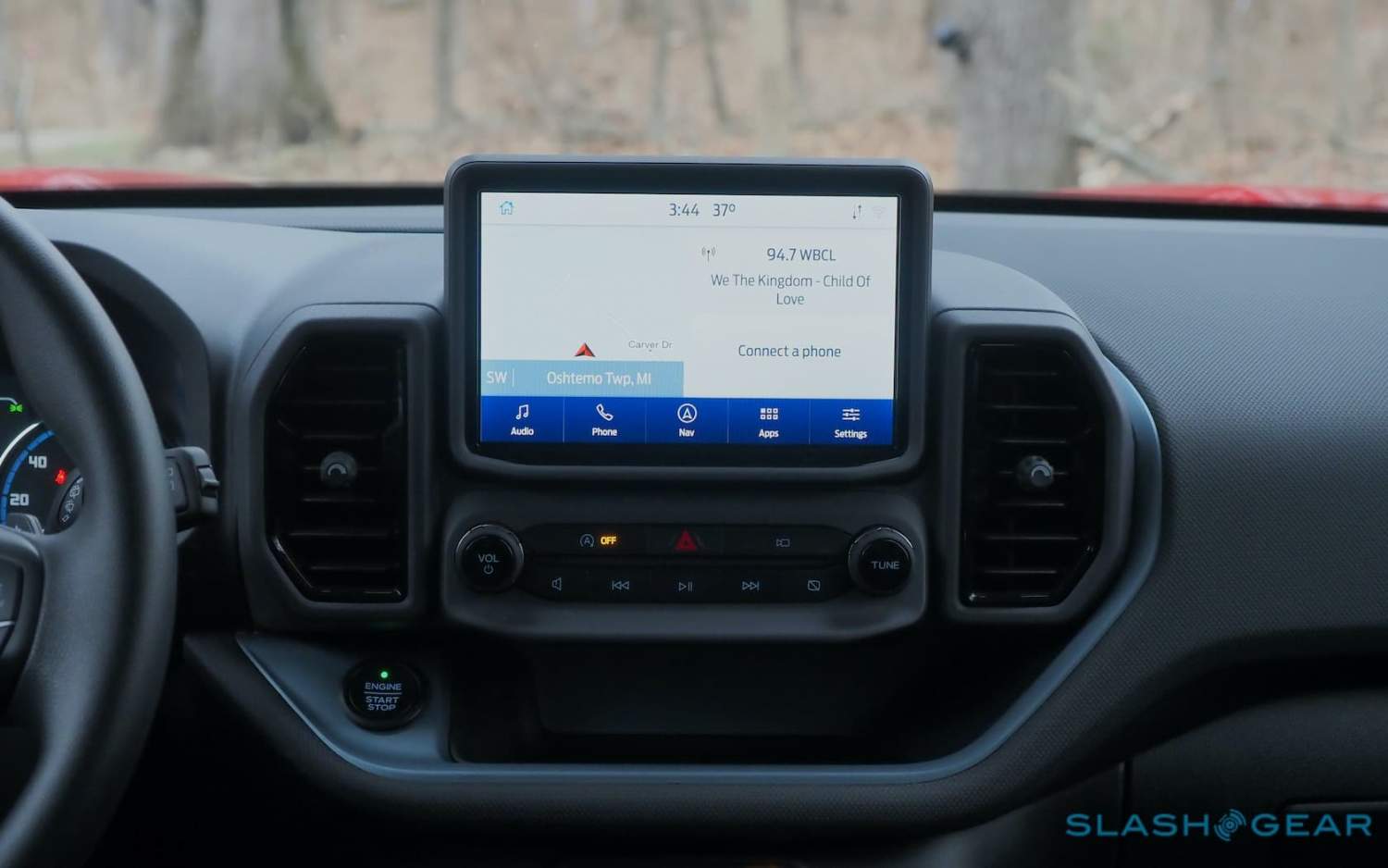 SYNC 3 supports Apple CarPlay and Android Auto, with a wireless charging pad as standard, but I do wish Ford had used its newer SYNC 4 on the 8-inch touchscreen as that looks and operates more cleanly. You also get the FordPass Connect smartphone app, which allows for optional remote start, unlock/lock, and other features from your phone. A 10-speaker B&O audio system with subwoofer is optional. 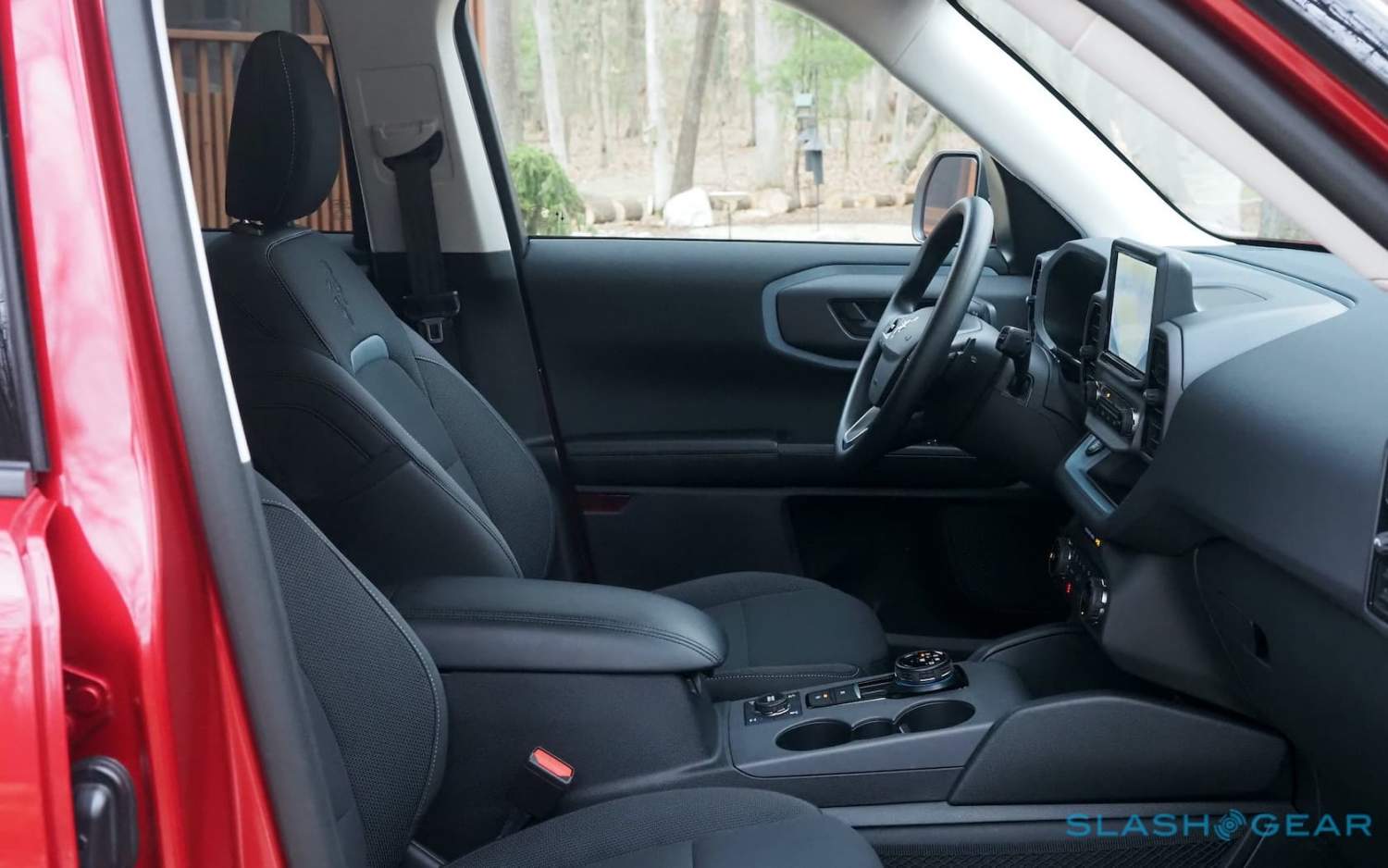 The front seats are comfortable and well-padded, though Badlands trim keeps dual-zone climate control as an option. You do get studier fabrics and materials on it than some of the other, plusher Bronco Sport trims: the Badlands has rubberized flooring, a matching cargo floor, and tough velour seats that feel like they’d be easier to clean. 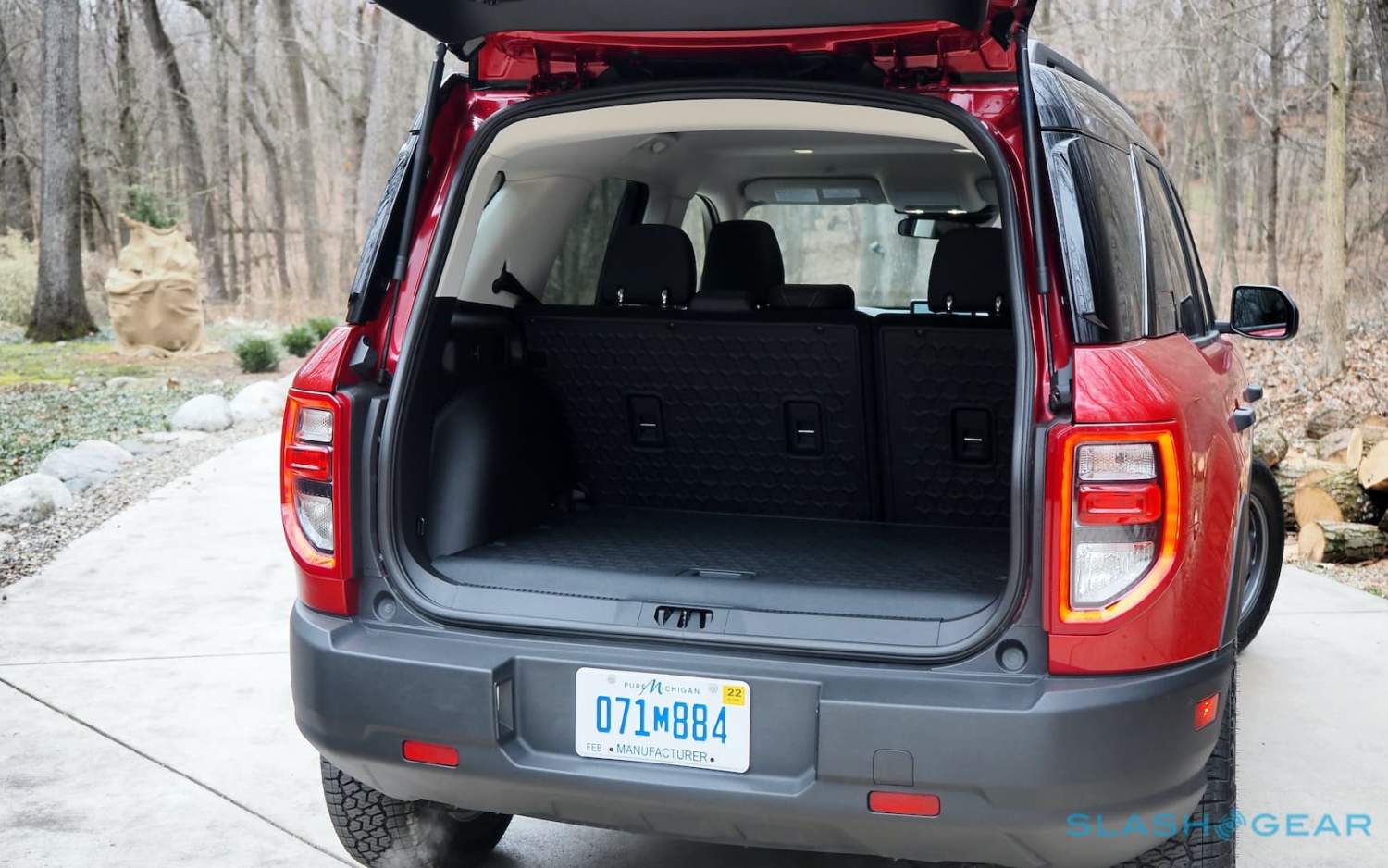 In the back, the Bronco Sport’s height means headroom isn’t an issue, but legroom feels tight. Rivals offer more space for your knees, and the useful zippered pouches in the seat-backs only eat into what you do get if you stuff them full. The 60/40 split bench lifts to reveal more storage or alternatively folds down, expanding the 32.4 cu-ft trunk to 65 cu-ft. The high roofline makes it big, flexible space, and there are hooks integrated around the edge to lash things down. Ford also offers various lights and outlets, including some built into the tailgate itself for those early morning or late night loading and unloading sessions. 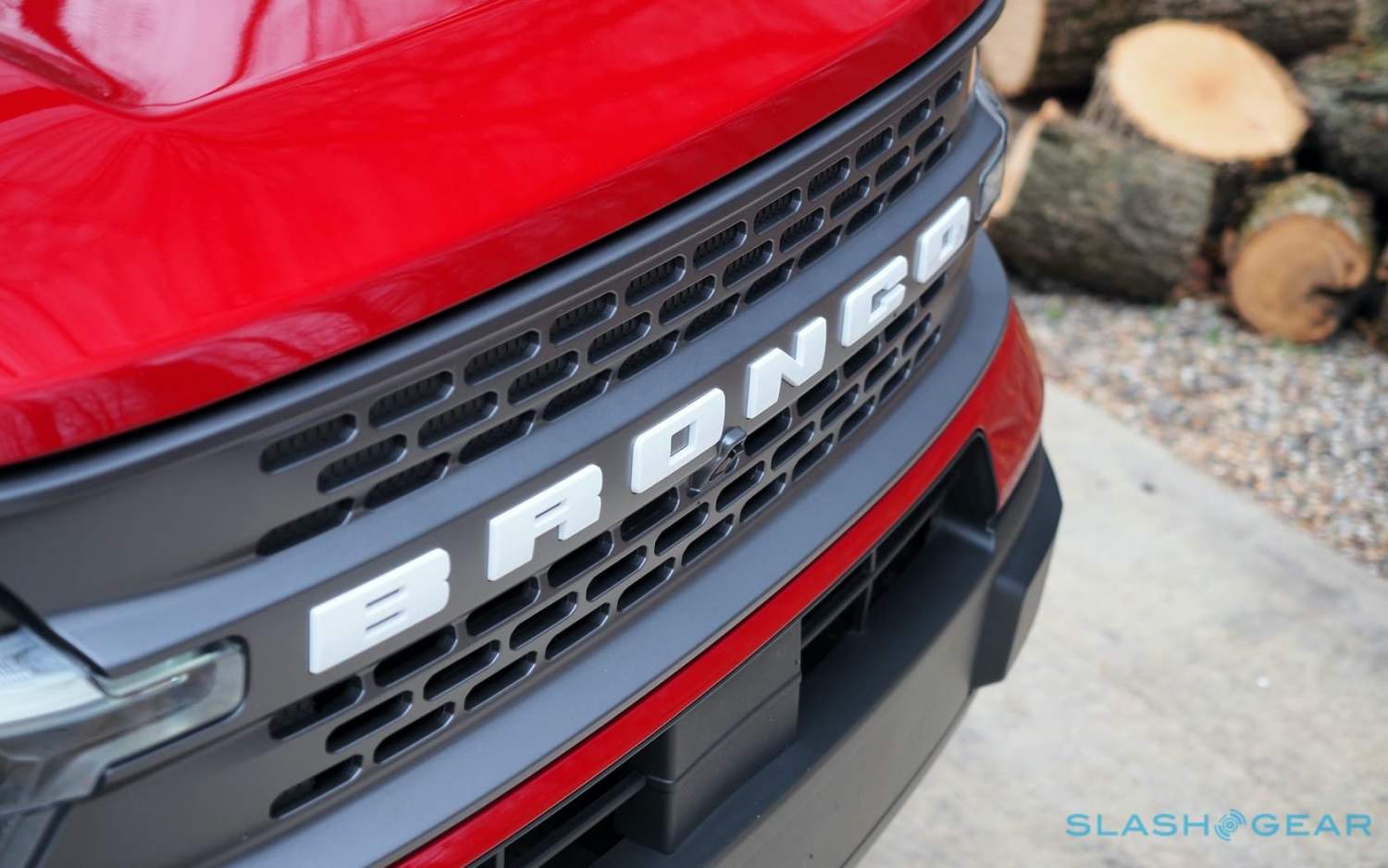 The 2.0-liter EcoBoost may be familiar, but that’s no bad thing generally. Torque arrives rapidly, and leaves the little off-roader feeling perky and urgent around town. Highway cruising isn’t short on grunt either, though you hear more of the drivetrain than in rival crossovers. As for the suspension, that’s dialed in with the wilderness in mind – to avoid shaking your teeth out should you venture off asphalt – and, combined with fairly strong power-assistance on the steering, means that cornering can feel a little more remote than in some sportier alternatives. 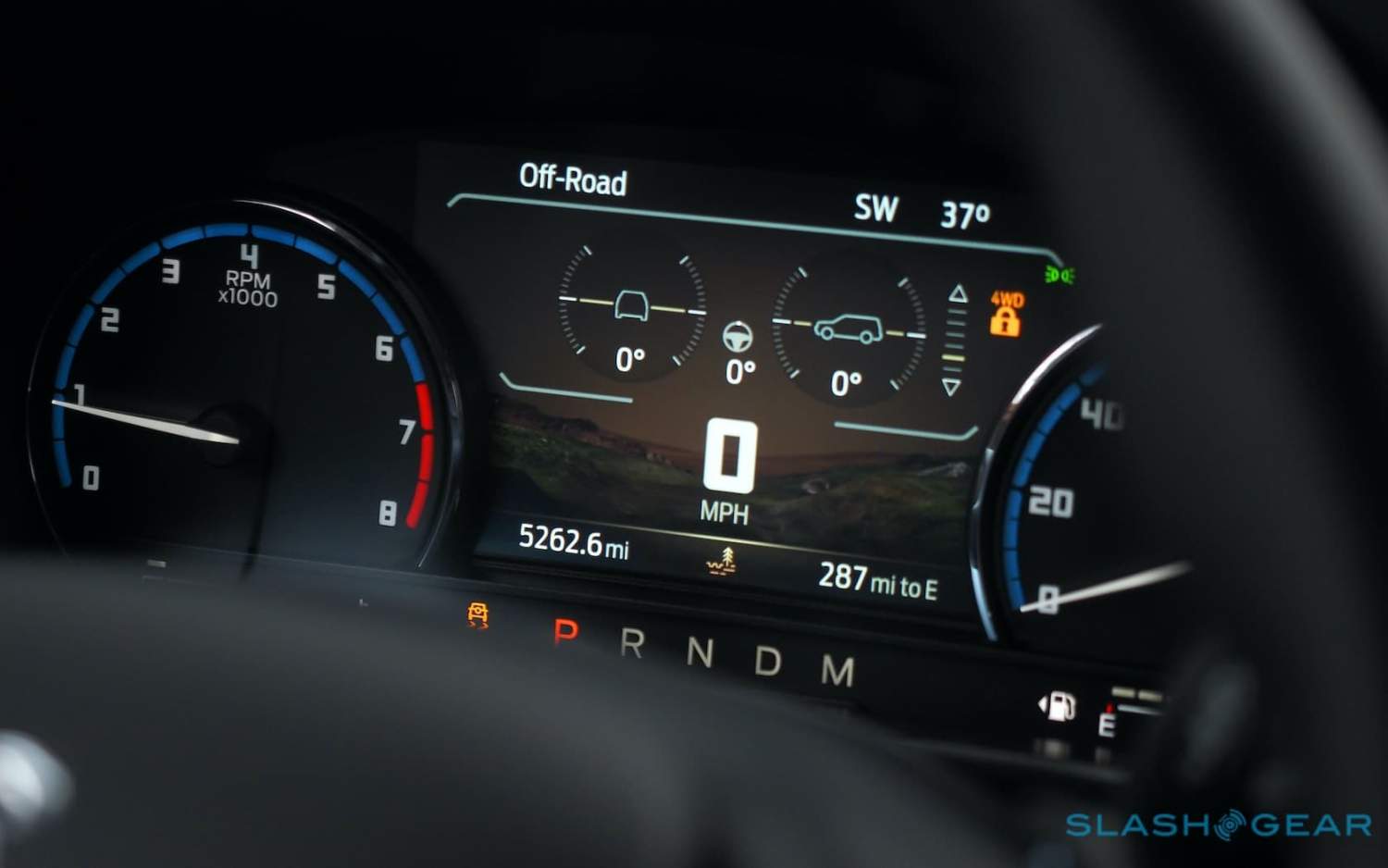 That’s not to say the Bronco Sport is incapable of fun, it just comes in a different flavor. Treated to unpaved dirt roads it playfully flirts with traction, delivering smiles but not forcing you to hose down those velour seats afterwards. I suspect owners taking their Bronco Sport off-roading will be in the minority, despite Ford’s marketing pitch, but that doesn’t mean they won’t find some entertainment taking the back roads instead. 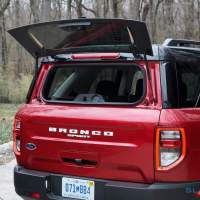 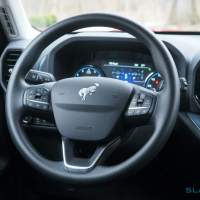 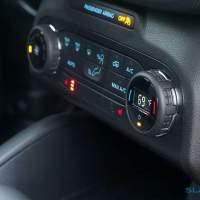 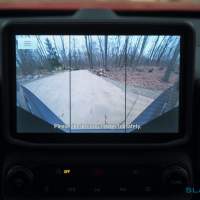 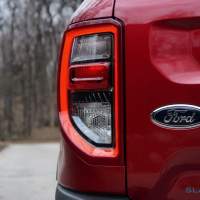 Ford’s packaging means you can carry a pair of mountain bikes in the back, which is impressive. The 2,200 pound tow rating is less so, and the 21 mpg city / 26 mpg highway / 23 mpg combined economy ratings aren’t going to win the crossover any awards. 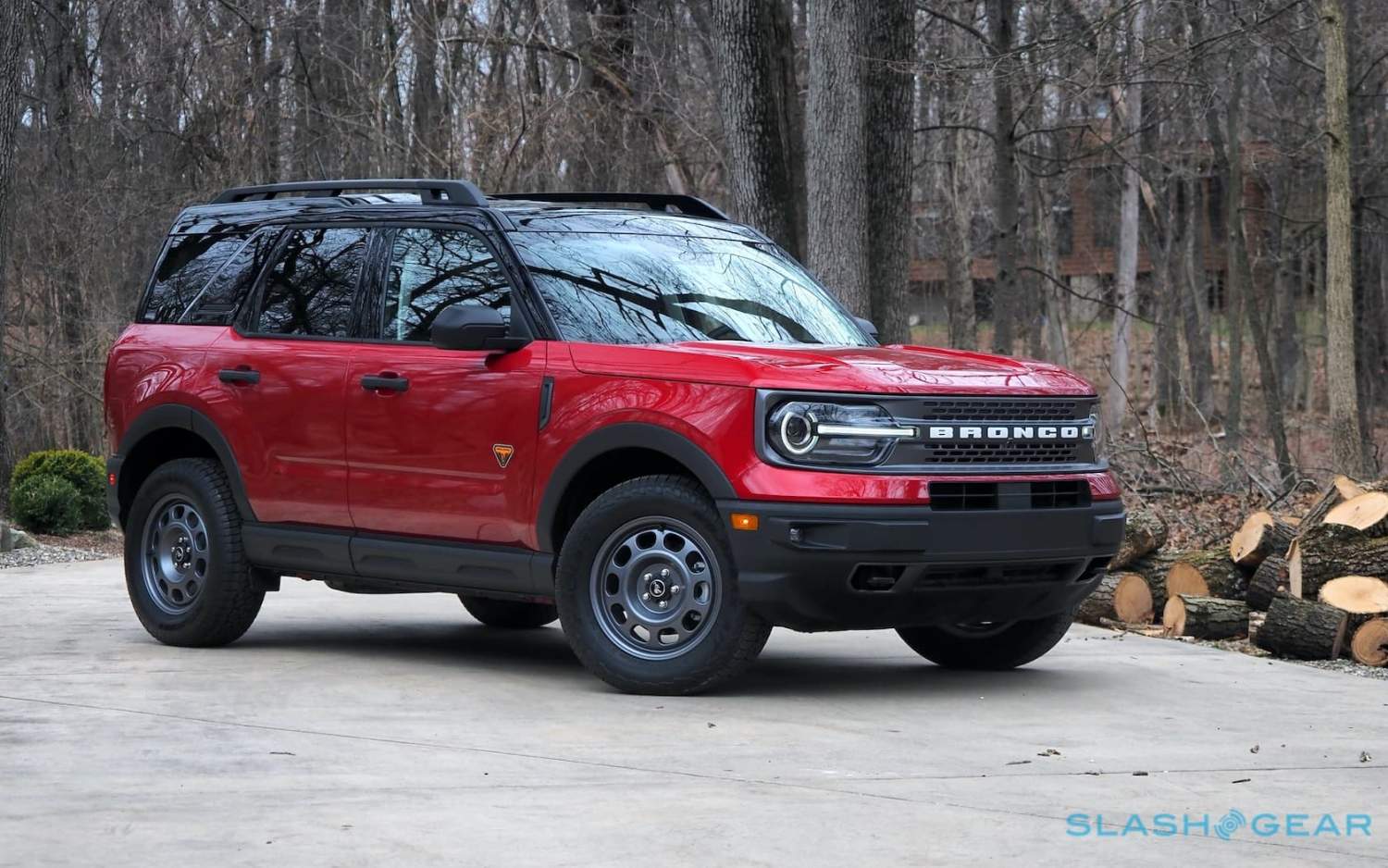 It’s tougher to dislike the Bronco Sport than I expected, frankly. The boisterous styling, playful driving manners, and flexible cabin and cargo area add up to a little SUV that feels distinctly different to its crossover rivals. If the Mazda CX-30 nudges the segment in a sportier direction, then the Bronco Sport does the same in the off-road direction. That’s without too many of the compromises that a full-scale mud truck demands of you, and enough that even when the actual Bronco arrives this mini-version shouldn’t be completely overshadowed.