Somewhere along the line crossovers turned into “just smaller SUVs,” and the 2020 Mazda CX-30 isn’t willing to go along with that. The segment trend toward practicality and an elevated driving position has been gradual but insidious, with dynamics at best an afterthought if not forgotten altogether. Question is, can the CX-30 strike a better balance?

There’s not much space in-between the CX-3 and CX-5 crossovers, but Mazda has decided to fill it nonetheless with the CX-30. The automaker would’ve called it the CX-4, in fact, had that name not already been used in China. 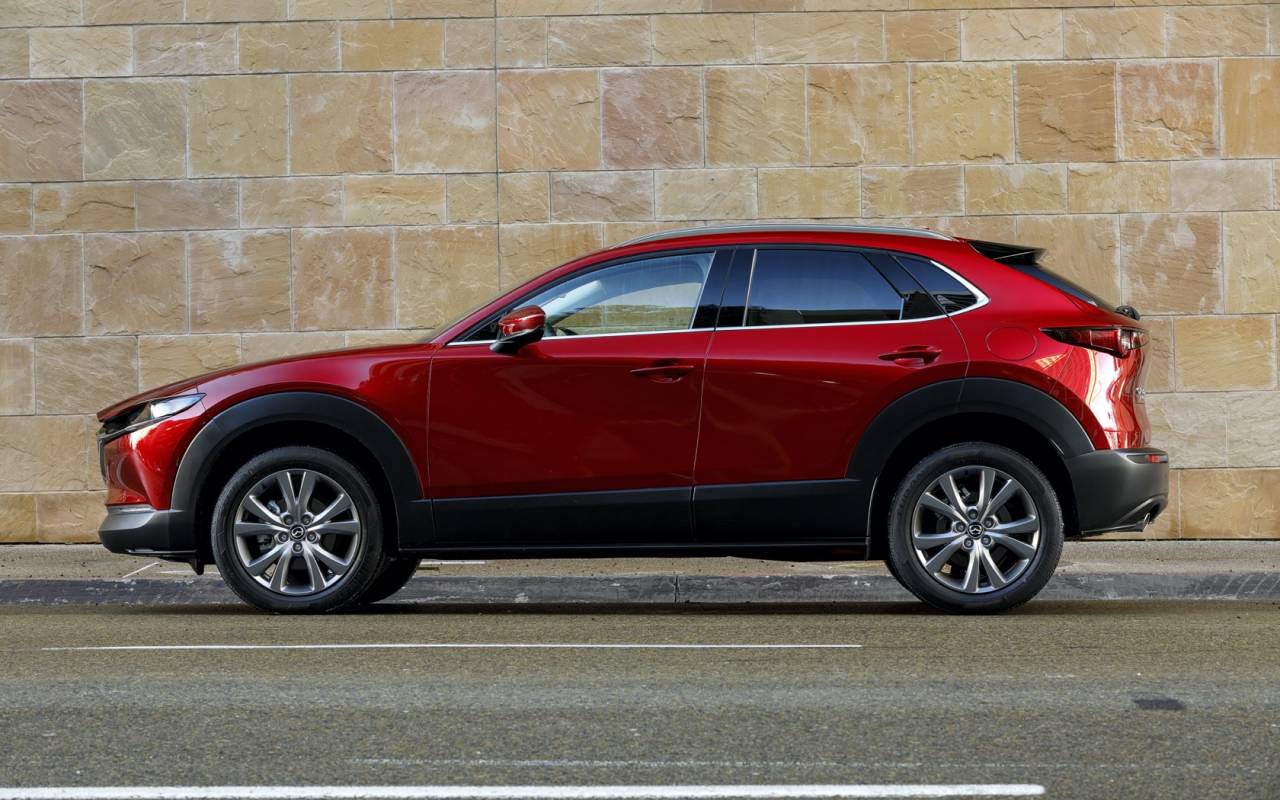 Mazda’s design language is a familiar thing these days, but it’s no less handsome. The CX-30 takes what we’ve seen on the CX-3 and CX-5 and gives it a slightly butcher refresh, with chunky black cladding around the front and rear lower spoilers, around the wheel arches, and along the side sills. There’s a splash of chrome in the kohl-like lining under the headlamps and grille, but generally the look is more purposeful than that of its siblings.

The side trim in particular helps to shrink down the sheet metal of the doors, visually at least. From some angles the CX-30 almost looks like a jacked-up Mazda3. Funnily enough, that’s pretty much what it actually is. 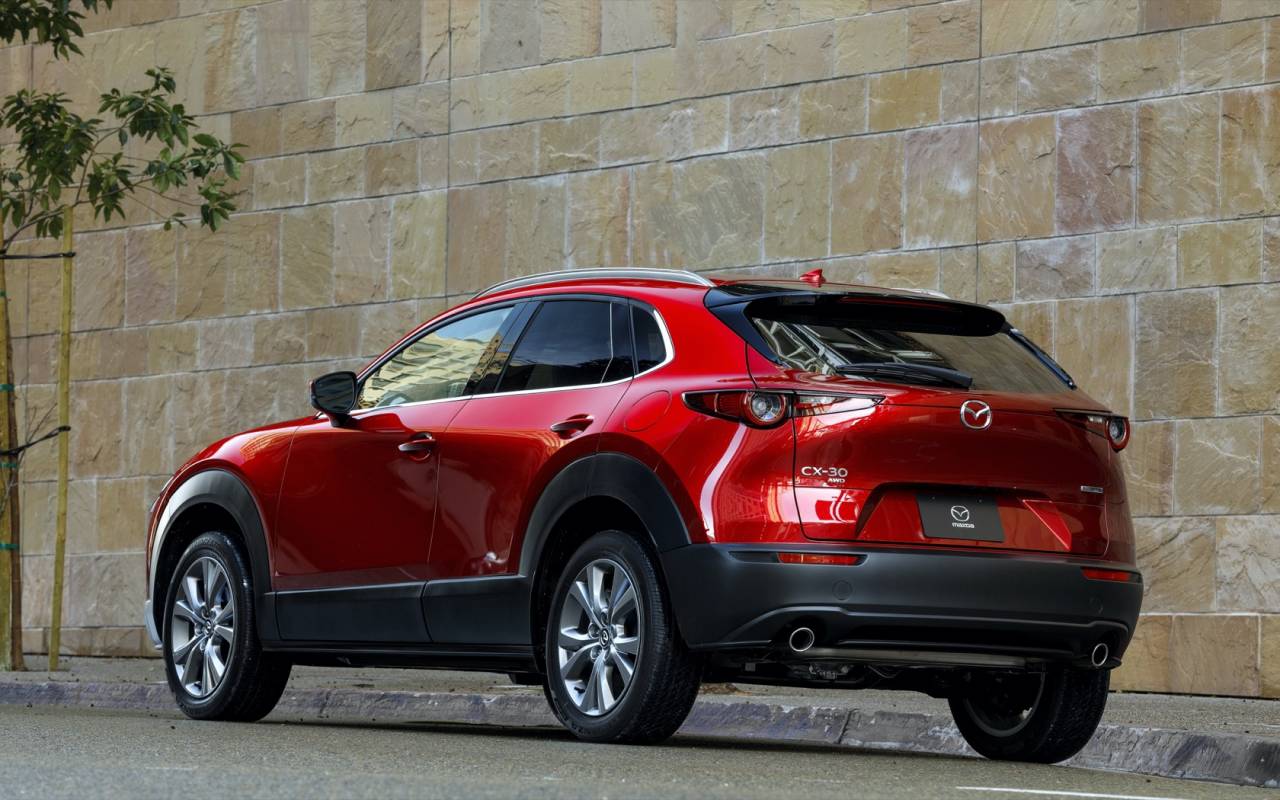 Both sedan/hackback and crossover share the same platform – the CX-3, in contrast, uses that of the Mazda2 – though Mazda juggles how it uses the space for the front and rear seats. Those in the front get the best deal, while the three-seater bench in the back is really scaled more for two adults by width. If you happen to have three narrow, long-legged friends, they’ll be okay.

As for the trunk, that starts out at 20.2 cubic feet with the rear seat-backs up, and 45.2 cubic feet with them down. That’s about 10 cu.ft. less than Mazda’s key rivals from Honda and Nissan, but then the HR-V and Rogue Sport don’t come close to the CX-30’s aesthetic charms. You pay your money and you pack your luggage to suit. 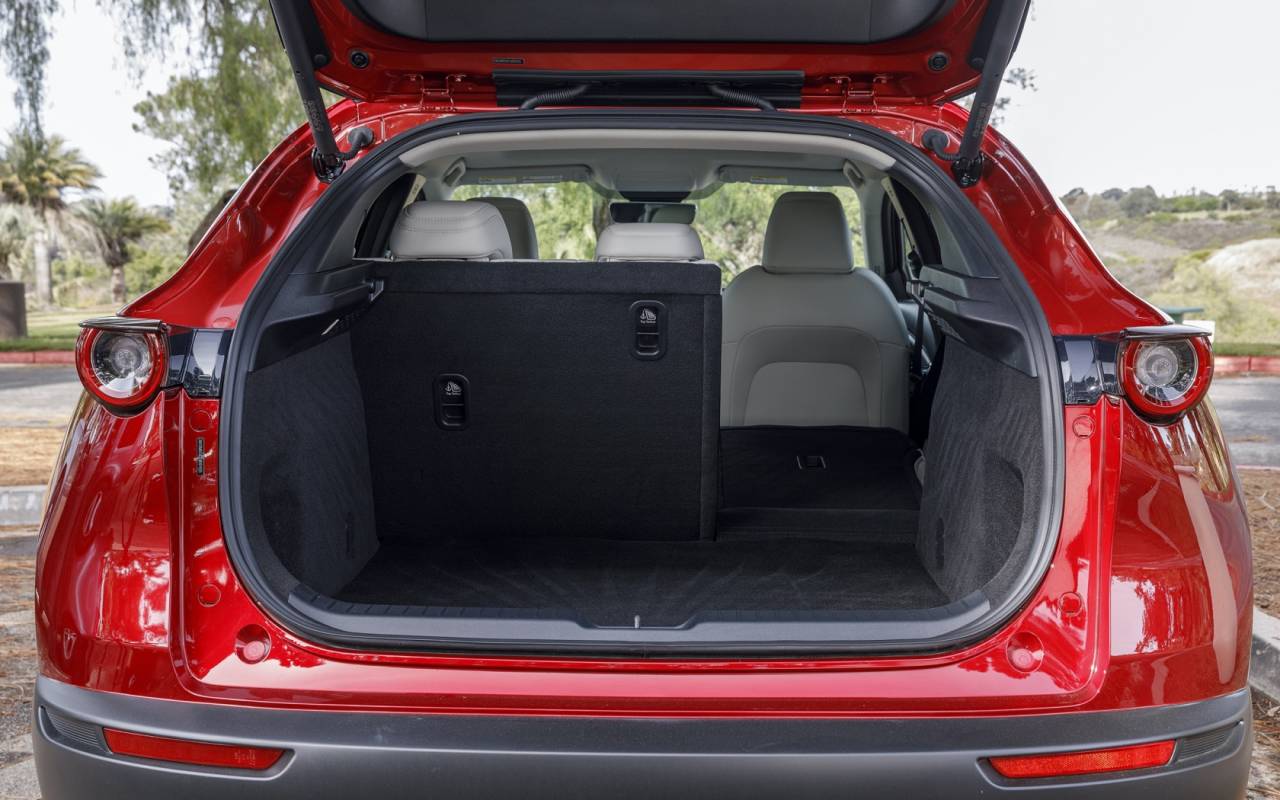 There’s a lot to like inside as well. If I’ve had a criticism about recent Mazda interiors it’s that they can often look the part but not quite feel it; the CX-30 doesn’t make that pratfall.

Again, Mazda3 drivers will see a lot they recognize here, and that’s no bad thing. Mazda’s designers aren’t afraid of leaving swathes of clean space, and leaving things like leather on the dashboard and the pleasingly tactile physical controls to reassure your fingers and gaze. Only the glossy black plastic in the tunnel around the transmission shifter feels a little underwhelming. 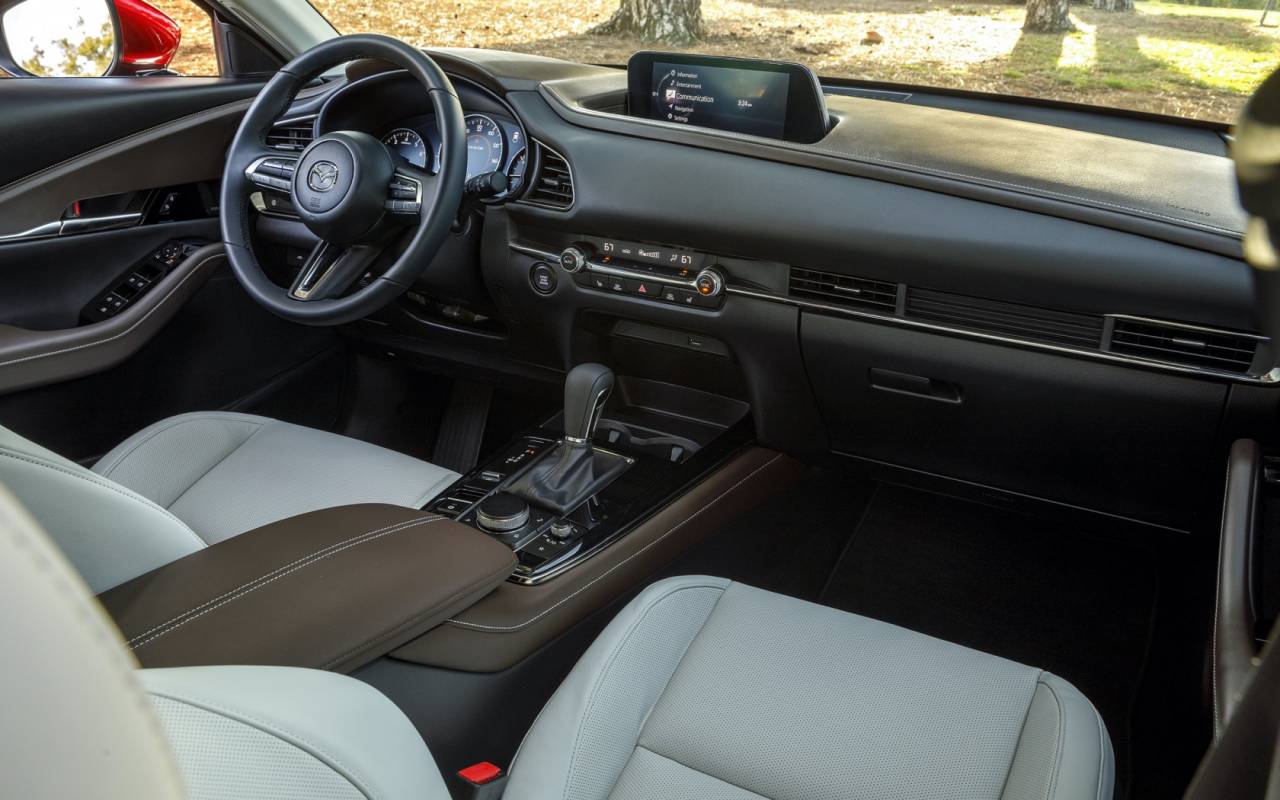 On the tech side, there’s an 8.8-inch display nestled in a bay on the top of the dashboard. Mazda positioned it high enough so that it’s just below your eye-line as you look at the road ahead, even if that does also mean it’d be too far to comfortably reach. That doesn’t matter, though, as it’s not a touchscreen.

Instead you use a rotary controller in the center console. Mazda’s argument is that it’s less distracting to use, though I’m not sure I agree. With us fully trained on touchscreens at this point, reaching out to jab at an icon or button is a whole lot quicker than trying to scroll through to it, particularly when you’re attempting to navigate Android Auto or Apple CarPlay, which are standard on the Select trim and above. 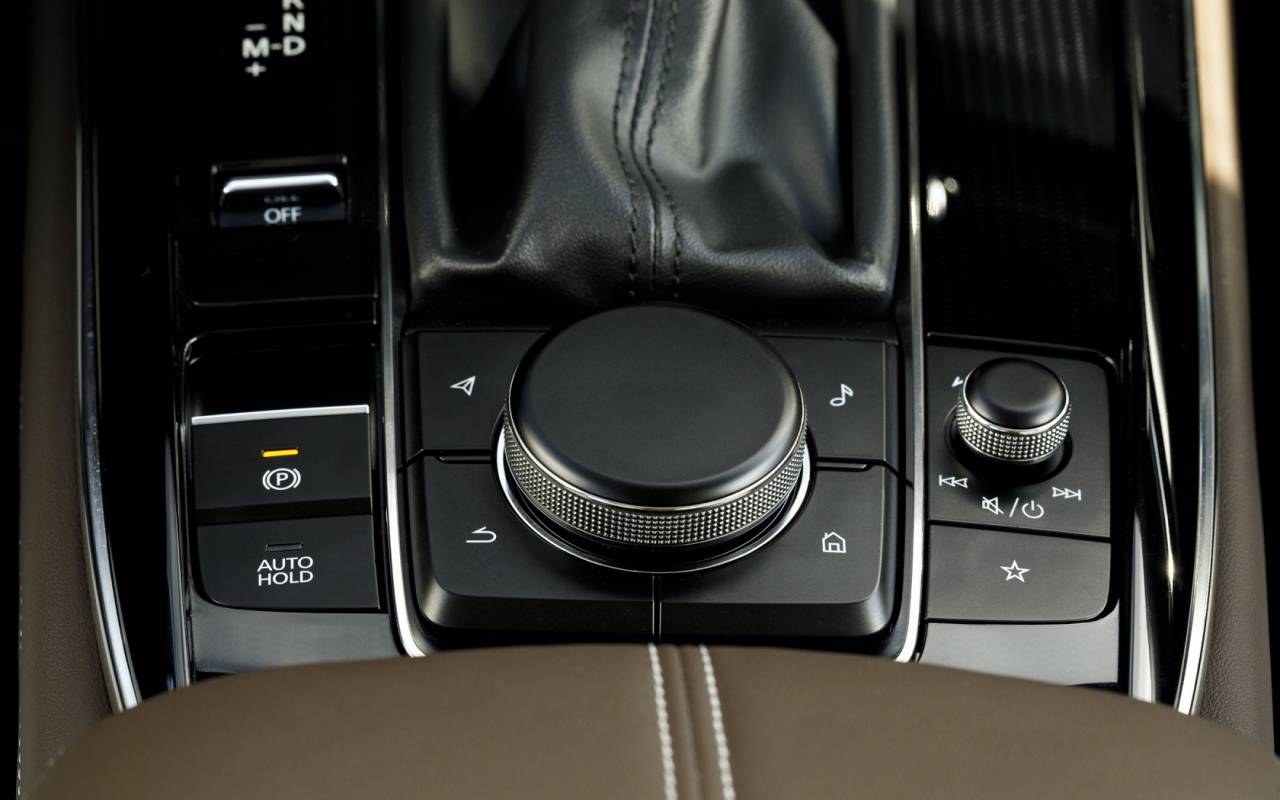 That’ll set you back $23,900 (plus $1,100 destination) and gets you an 8-speaker audio system, blind-spot monitoring, adaptive cruise control, keyless entry, leatherette seats, and dual-zone climate control with rear vents. The entry-level CX-30, in contrast, is $21,900 and of that list only gets the 8-speakers, cruise control, and keyless entry, plus you’ll sit on cloth. The $26,200 Preferred trim throws in heated front seats with 8-way power and 2-position memory for the driver, along with a Bose 12-speaker audio system.

Finally, the 2020 CX-30 Premium starts at $28,200. It gets leather, paddle shifters, a power lift gate, and Mazda’s signature LED lighting with adaptive headlamps. You also get to look at a color head-up display, in addition to the 7-inch driver display that all trims have. Unfortunately there are no more USB ports than the front two all trims make do with, leaving rear passengers out of luck. 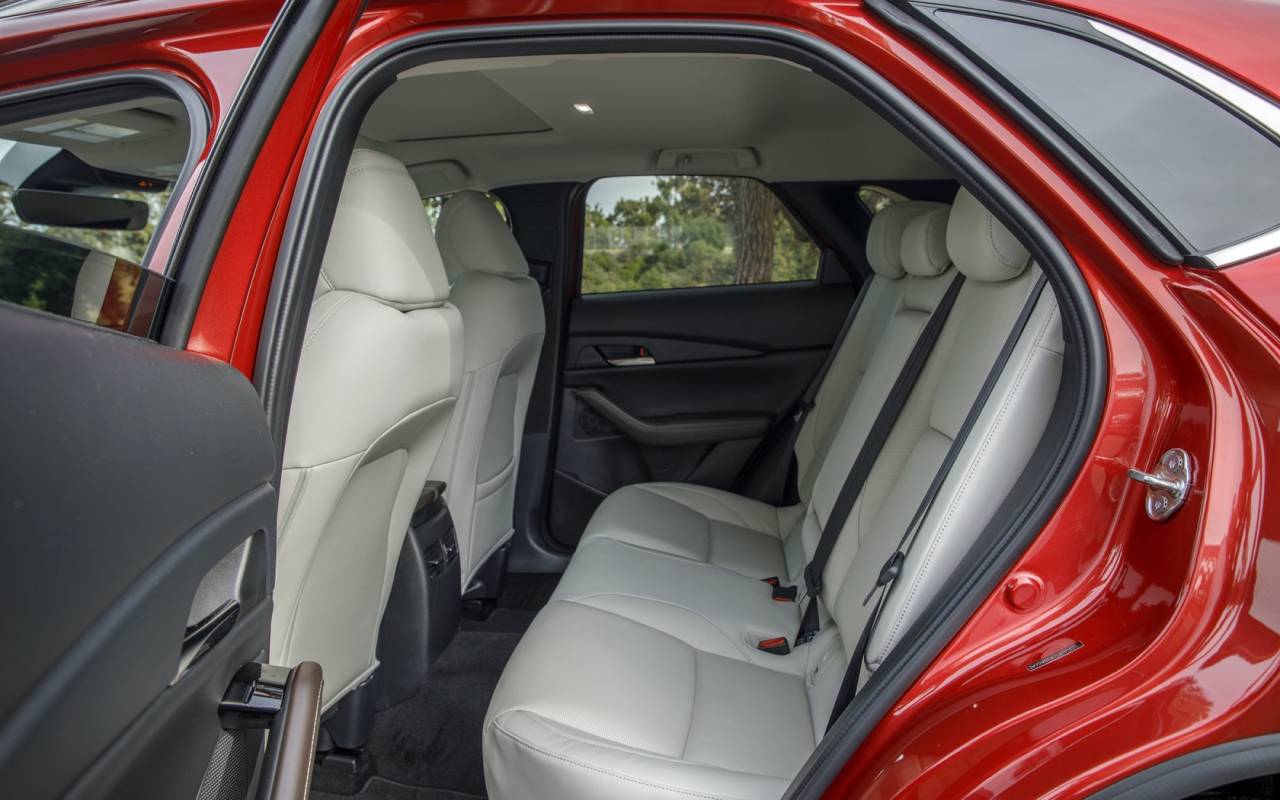 Shared across the line-up is a single engine, Mazda’s 2.5-liter SKYACTIV-G with 186 horsepower and 186 lb-ft of torque. A six-speed automatic is standard too, as is front-wheel drive with all-wheel drive a $1,400 option.

On paper, the CX-30’s 0-60 mph time of around 8 seconds drops it somewhere in the middle of the compact crossover pack. From behind the wheel, though, you’d not think it. Mazda has always punched above its weight when it comes to chassis dynamics, and the CX-30 keeps its Mazda3 cousin’s combination of poise and eagerness. 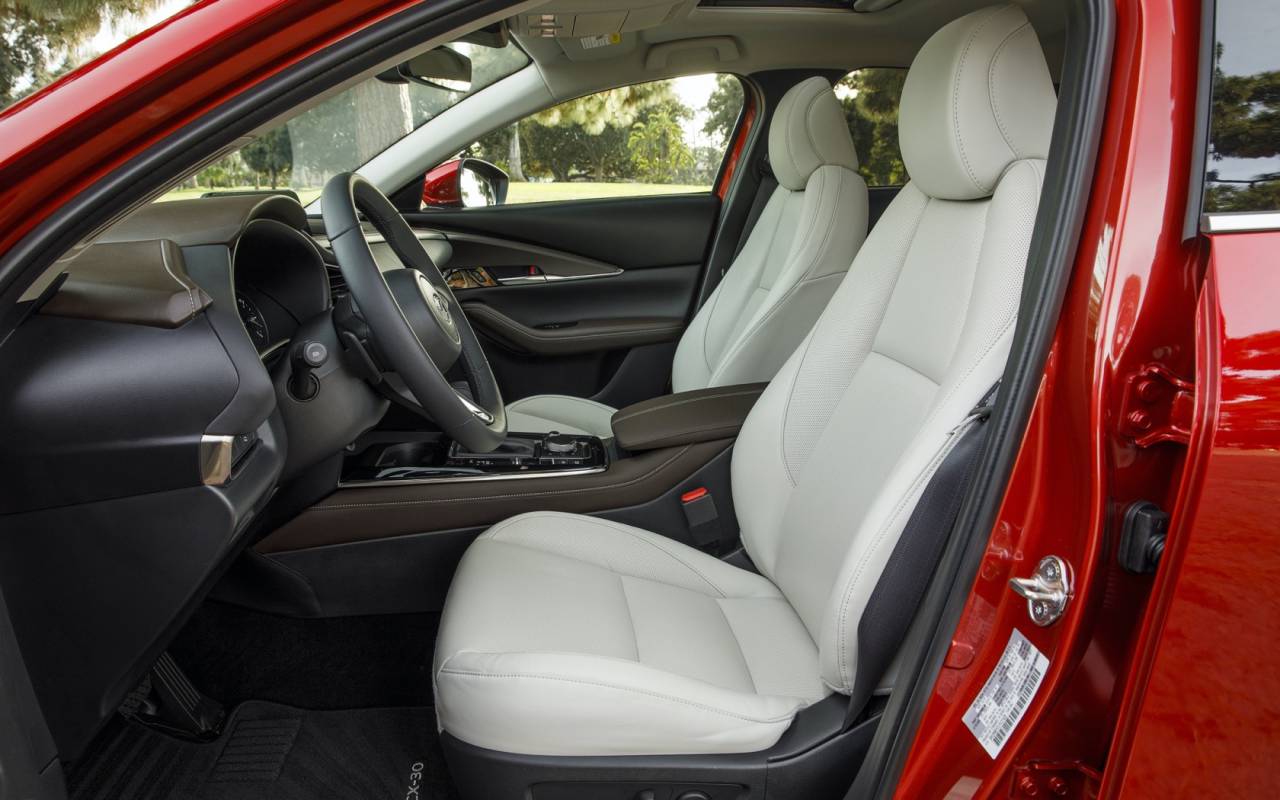 Turn on Sport mode and the transmission keeps things ticking right where the four-pot delivers its best. This isn’t the shock-and-awe method of throwing power at the situation, the crossover instead relying on precise and beautifully-weighted steering, just the right mix of compliance and firmness in the corners, and predictable brakes. It leaves the CX-30 as much at home on highway jaunts as it is nipping around corners, and if you had assumed more practicality would come at the cost of driver engagement, Mazda is here to tell you that’s not the case.

As for economy, Mazda says the FWD model will do 25 mpg in the city, 33 mpg on the highway, and 28 mpg combined. Opt for the AWD and that dips to 24 mpg, 31 mpg, and 26 mpg respectively. My time behind the wheel of the CX-30 AWD suggested it wasn’t hard to hit those numbers. 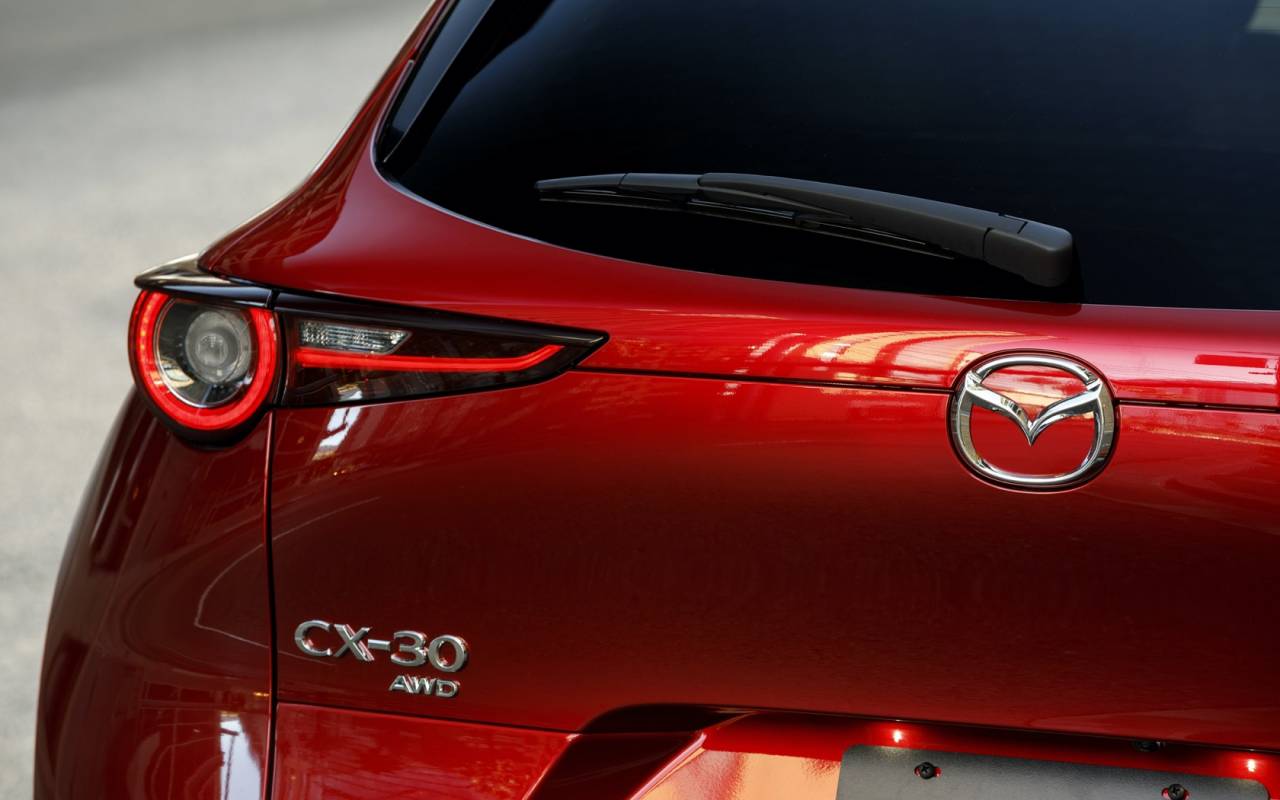 I’ll confess, my first inclination was to deride the CX-30 as a range-padding exercise, Mazda following the example of automakers like Mercedes and BMW and leaving no gap in the line-up unfilled. As I waved it goodbye, however, I was about ready to crown it king of Mazda’s crossovers.

The tweener sizing means it’s big enough for family duties but not so large as to feel profligate or unwieldy. The cabin feels the part, the styling hits the mark, and it’s priced competitively (though I’d skip straight to Select trim at the very least). Most important, the experience behind the wheel is a reminder that crossovers were meant to combine practicality with car-like driving dynamics. Too often it feels like automakers have sacrificed the latter: the 2020 Mazda CX-30 nudges the scales back in a way that keener drivers will appreciate.