The 2021 Ford Bronco Sport is an exciting proposition, but it’s easy to misjudge. Unlike its bigger Bronco 2-door and 4-door siblings, Bronco Sport sits on a modified platform shared with the Escape crossover. But where the Escape is tailor-made for urban cruising, the new Bronco Sport is skewed towards outdoorsy owners who enjoy an active – dare I say wilderness-embracing – lifestyle.

In fact, it only shares 70 to 80-percent of the Escape’s underpinnings. The Bronco Sport trims the wheelbase by 1.8-inches, compared to the Escape, while measuring 173-inches long. That’s almost the same length as a Jeep Compass, making it a suitably small SUV despite how it looks in photos. 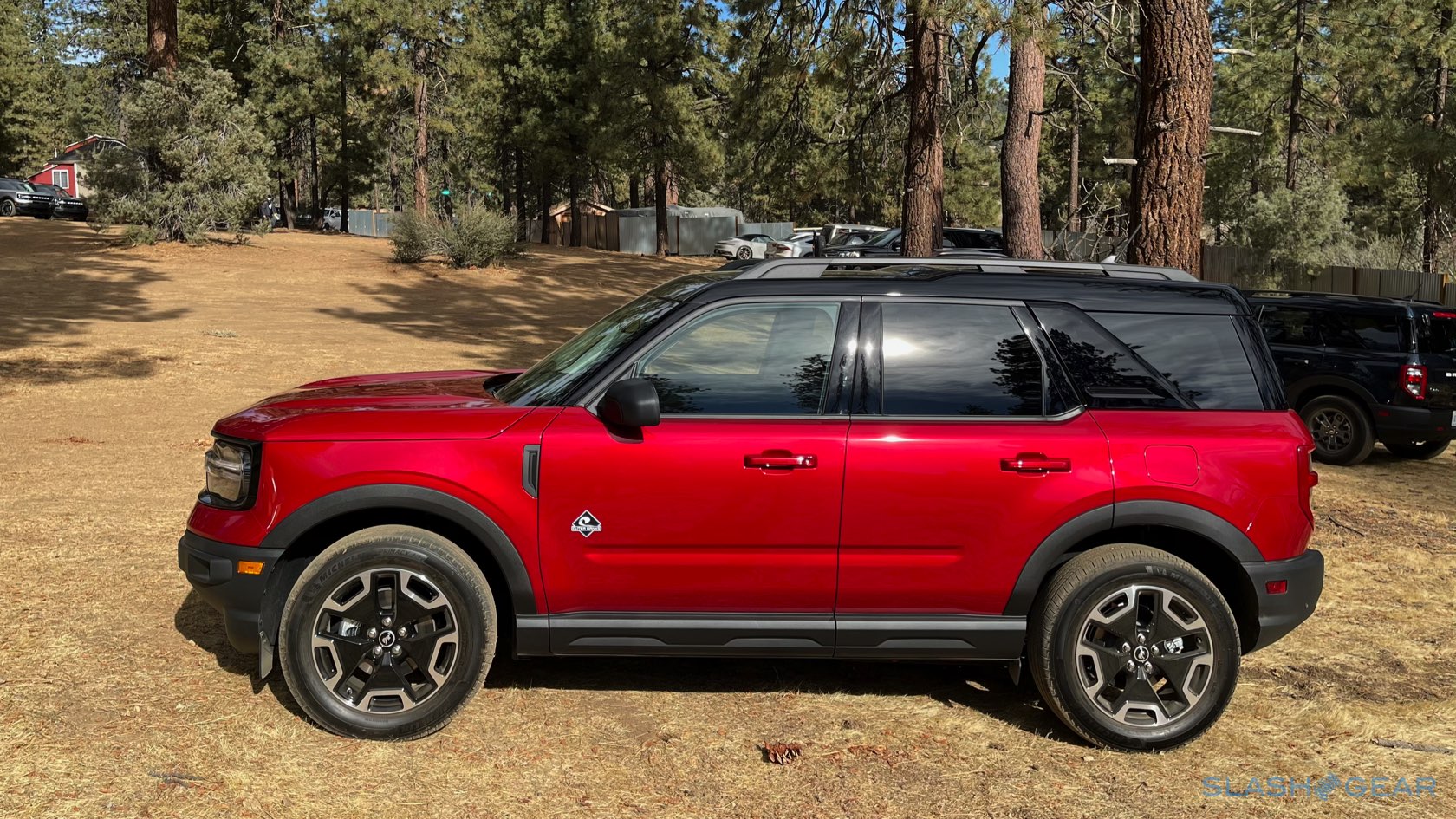 It even shares the same engine choices with the Ford Escape. The Bronco Sport Base, Big Bend, and Outer Banks series have a 1.5-liter turbocharged three-cylinder engine EcoBoost engine, with 181 horsepower and 190 lb.-ft of torque. This small engine packs quite a punch while still getting 25 mpg city, 28 highway, and a combined average of 26. I suspect this engine will be the lion’s share of sales for most buyers. 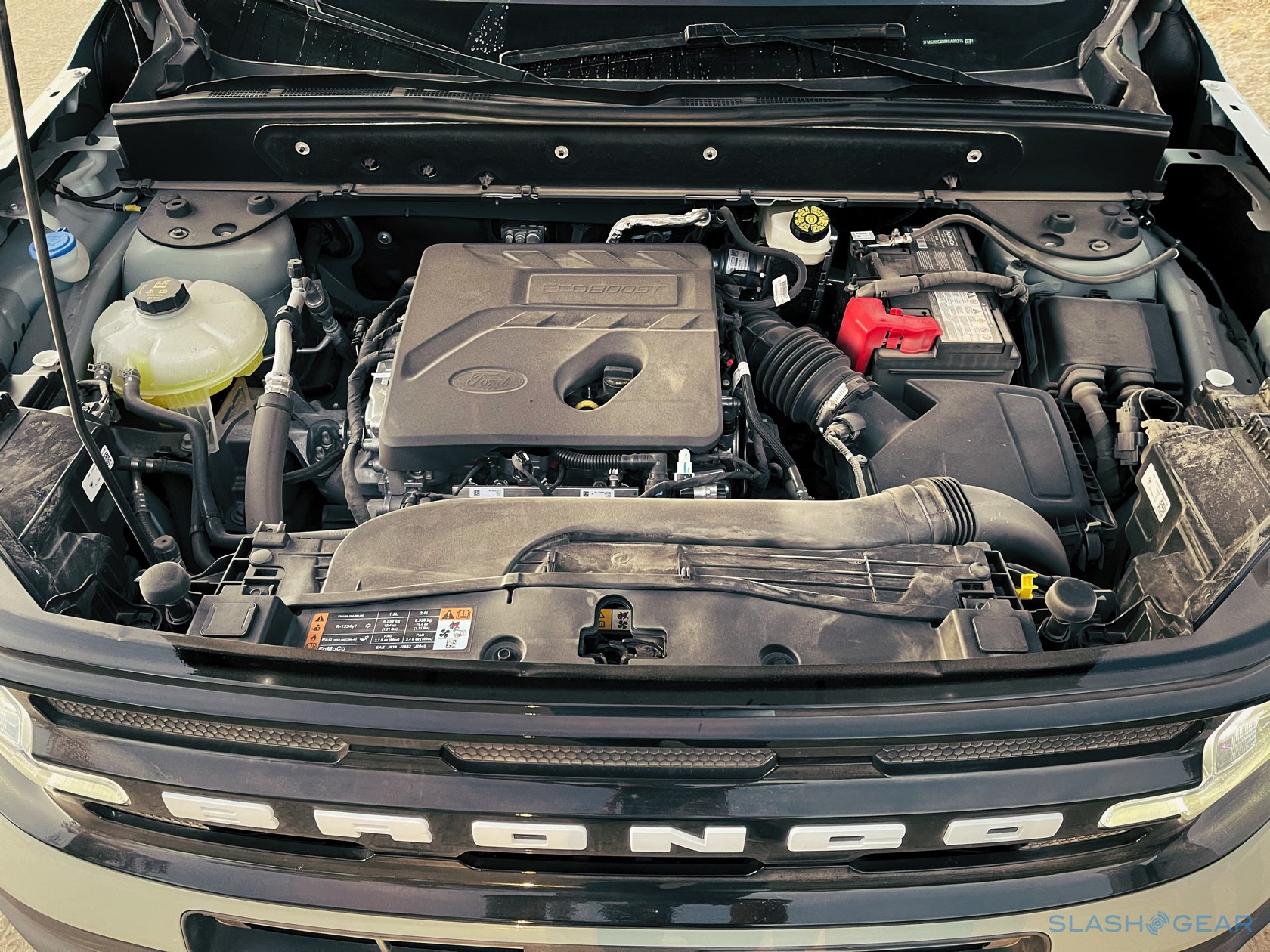 It took spending half of my drive time pushing the 1.5-liter on a paved road and then off-road, to instill an unexpected sense of confidence that the Bronco Sport is, despite my fears otherwise, no Escape. Even more surprising, I’m left with the suspicion that most of the time it’ll prove just as capable as the 2.0-liter engine.

That 2.0-liter turbo-4 is exclusively found in the Bronco Sport Badlands and First Edition, where it offers 245 horsepower and 277 lb.-ft of torque. Expect 21 mpg in the city, 26 on the highway highway, and 23 combined. Both engines are mated to an 8-speed automatic transmission; unlike the manual option in the bigger Bronco, this is the Bronco Sport’s only gearbox. 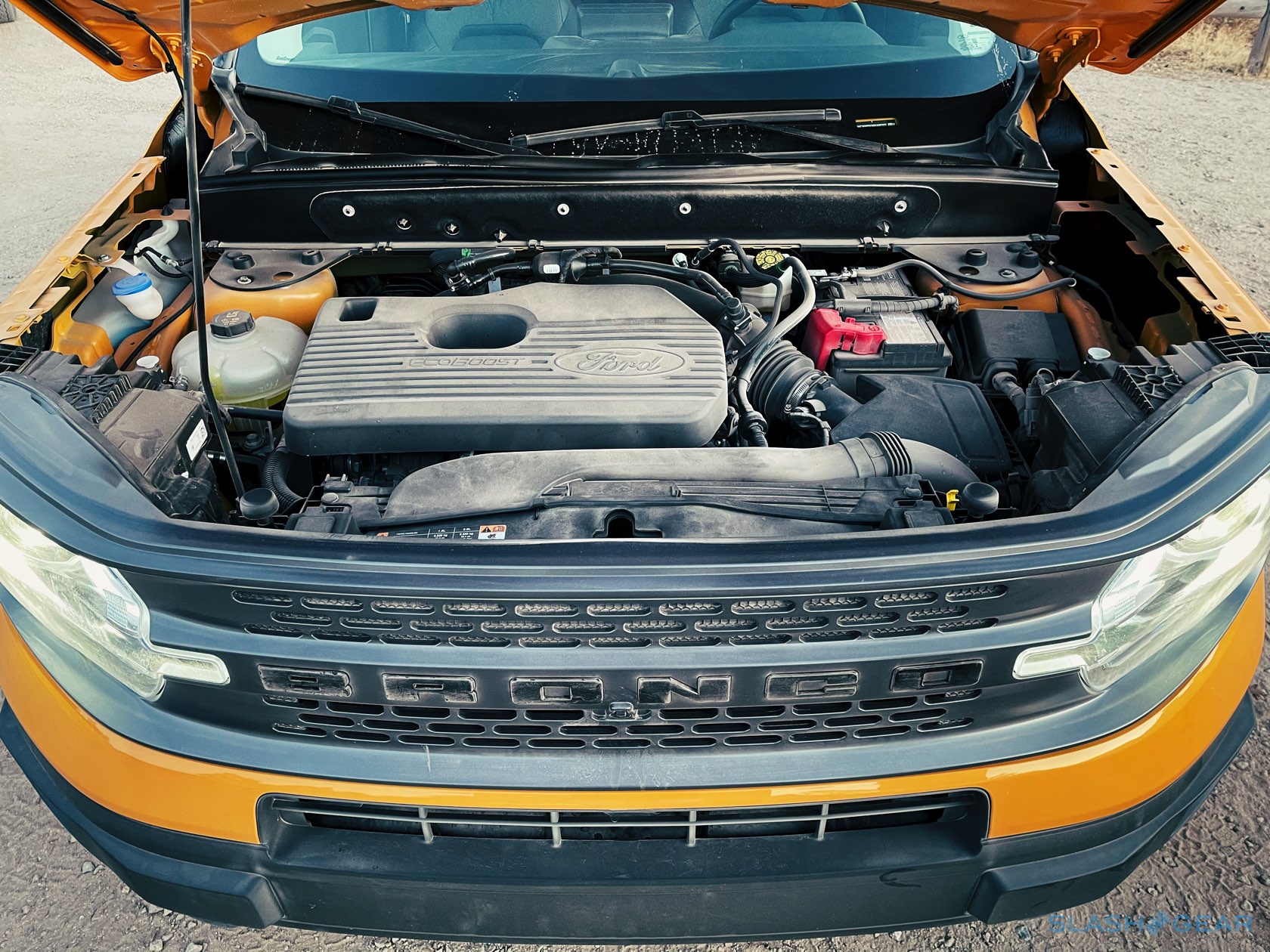 Also exclusive to the Badlands and First Edition models are the steering-mounted paddle shifters. The two upper trims get additional coolers, too, for their transmission and the rear drivetrain. That, Ford says, should ensure better performance during more intense off-road sessions. 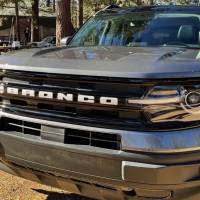 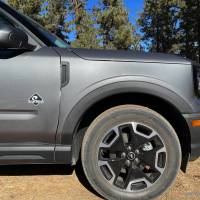 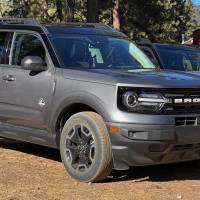 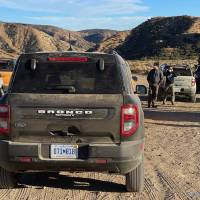 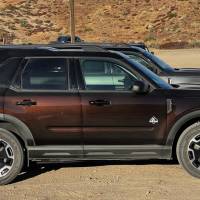 You’d be happy to know that all Bronco Sport models get all-wheel-drive as standard, though not every trim gets the same system. The base and mid-tier models borrow a similar AWD system to that of the Ford Escape, albeit with new software to maximize its off-road capabilities. Unlike in the Escape, the Bronco Sport’s flavor of the AWD system is more serious in transferring power to the ground, instead of muting the engine response to improve traction. 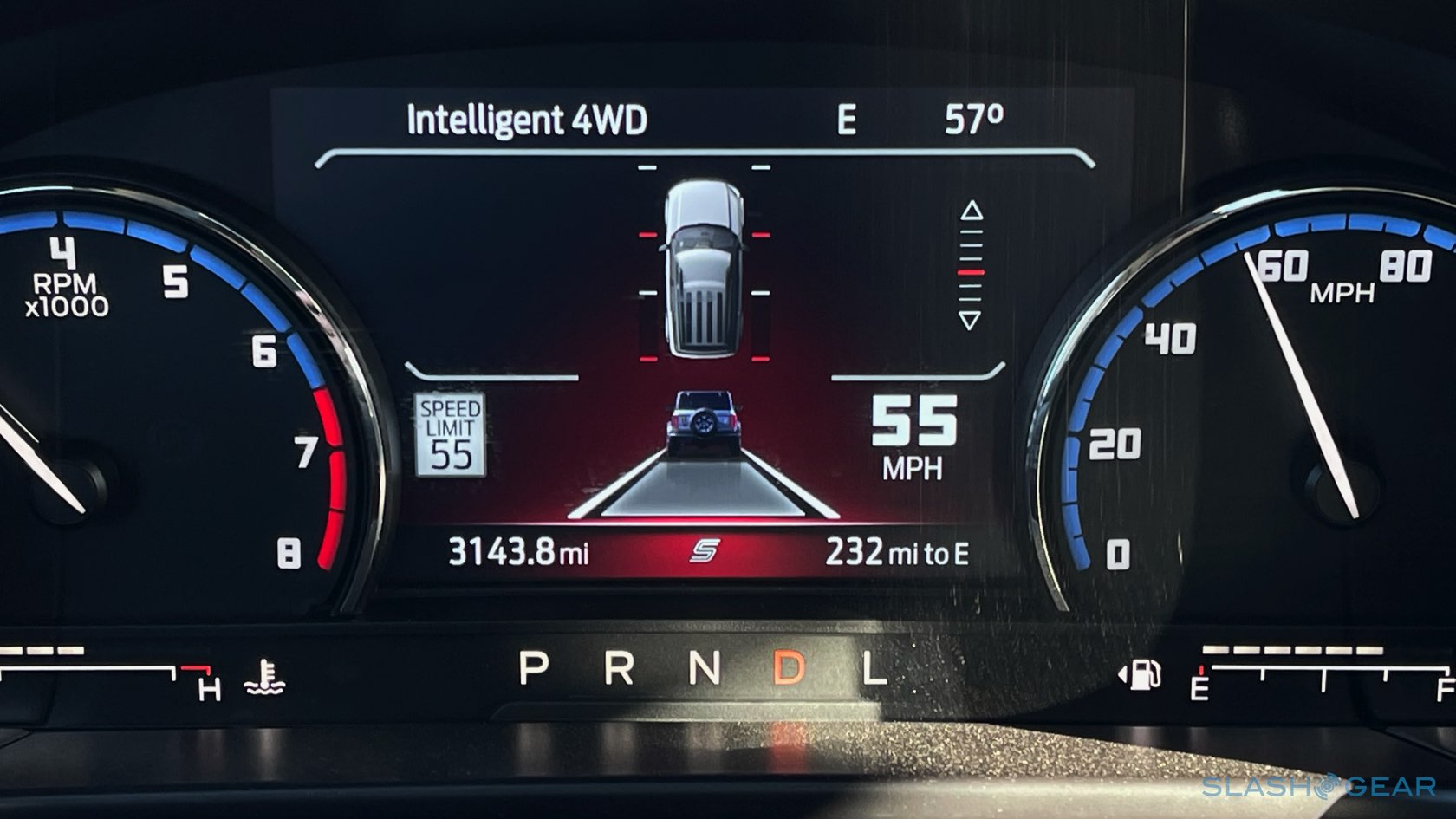 Along with their bigger engine, the Badlands and First Edition models get a unique torque-vectoring differential in their rear axle. The twin-clutch system can transfer up to 100-percent of available torque, as well as acting as a limited-slip and locking differential, by locking the transmission in first gear.

If I’m being brutally honest, my expectations weren’t high for the Bronco Sport. Consider me shocked, then, that it proved just as capable as the Jeep Renegade – and most definitely better suited than the Subaru Crosstrek, Toyota RAV4, and Ford Escape – when facing a tough off-road course. With no active transfer case for low-ratio gearing, the Bronco Sport will undoubtedly turn off “serious” off-roaders. All the same, for novices and part-time adventurers, no other compact SUV in this price range can get you farther when the pavement turns to dirt.

“From the beginning, we knew that Bronco would appeal to more than one kind of adventurer,” Debra Hotaling, head of US regional communications at Ford Motor Company, explained to me. “On one hand, you’ve got folks who would take their bronco and push the limits of its capability, while others will take a Bronco and see it as the ultimate gear locker.”

Key to its unexpected talents are the GOAT off-road driving modes. GOAT stands for Go Over Any Terrain, and Bronco Sport has no less than five driving modes (Normal, Eco, Sport, Slippery, and Sand) in the base and mid-trim models, while the Badlands and First Edition models get two extra driving modes, Mud/Ruts and Rock Crawl. Ground clearance ranges from 7.9 to 8.8-inches, depending on the trim, while the Bronco Sport can wade through 17.7 to 23.6-inches of water, depending on tire size. 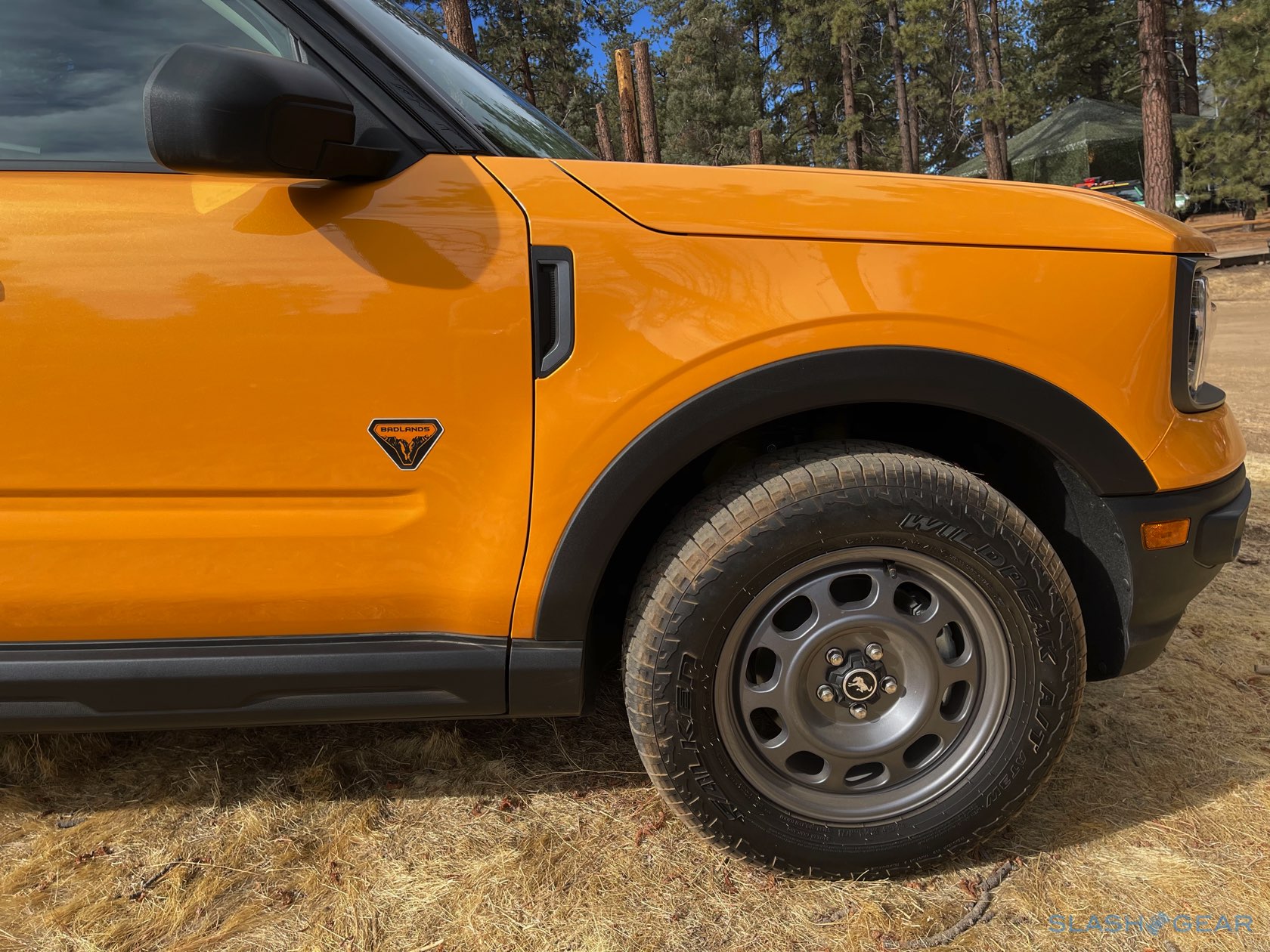 When I say this is novice-friendly, I don’t mean it as a snub: in fact, Ford has done its best to make taking the Bronco Sport off the asphalt as unintimidating as possible. The optional Trail Control is a good example of that, essentially an off-road version of cruise control. When engaged, Trail Control can max out at 20 mph going forward (or up to 6 mph in reverse) while the system handles the throttle and brakes. It allows you, the driver, to focus on steering the vehicle when climbing over mud ruts or dunes, and proved more than useful during my test drive along a very technical trail in the Hungry Valley Vehicular Recreation area.

Towards the end of our test drive, I drove the Bronco Sport First Edition off-of a 34-degree cliff and survived to tell the tale. While Ford didn’t let me drive it back up, one of Ford’s hotshot drivers scaled the Black Diamond-level hill ascension, and the SUV didn’t break a sweat.

As for the styling, there the Ford Bronco Sport surprised me again. Pictures don’t really do it justice, especially right next to the full-fat Bronco coming midway through next year. The compact footprint and upright design give it a rugged stance, while the step-up roof design is reminiscent of old Land Rover Defenders. It has iconic round headlamps, short front and rear overhangs, and flat body sides.

“Honesty and robustness were two keywords we kept in mind in designing the Bronco sport,” Brian Paik, Ford senior exterior designer, explained. “So even if Bronco sport is more compact, we wanted it to communicate off-road authenticity without trying too hard like other small SUVs in the market.” 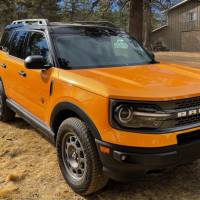 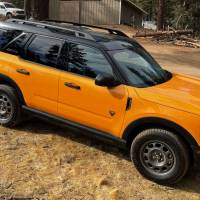 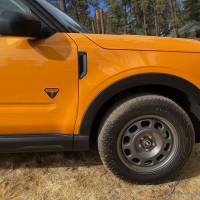 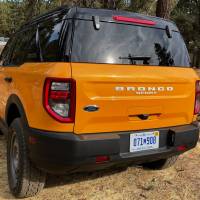 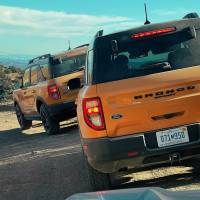 Now, I know it and Ford knows it: most of the time, the Bronco Sport will live on the road, not the trail. Happily there it lives up to expectations of an easy-going daily driver. The interior has more combined legroom than a Mazda CX-30, Jeep Renegade, or Toyota RAV4 – despite having a shorter wheelbase than the Escape – while thanks to the step-up roofline, the Bronco Sport has more second-row headroom than virtually any other compact SUV in the market today. 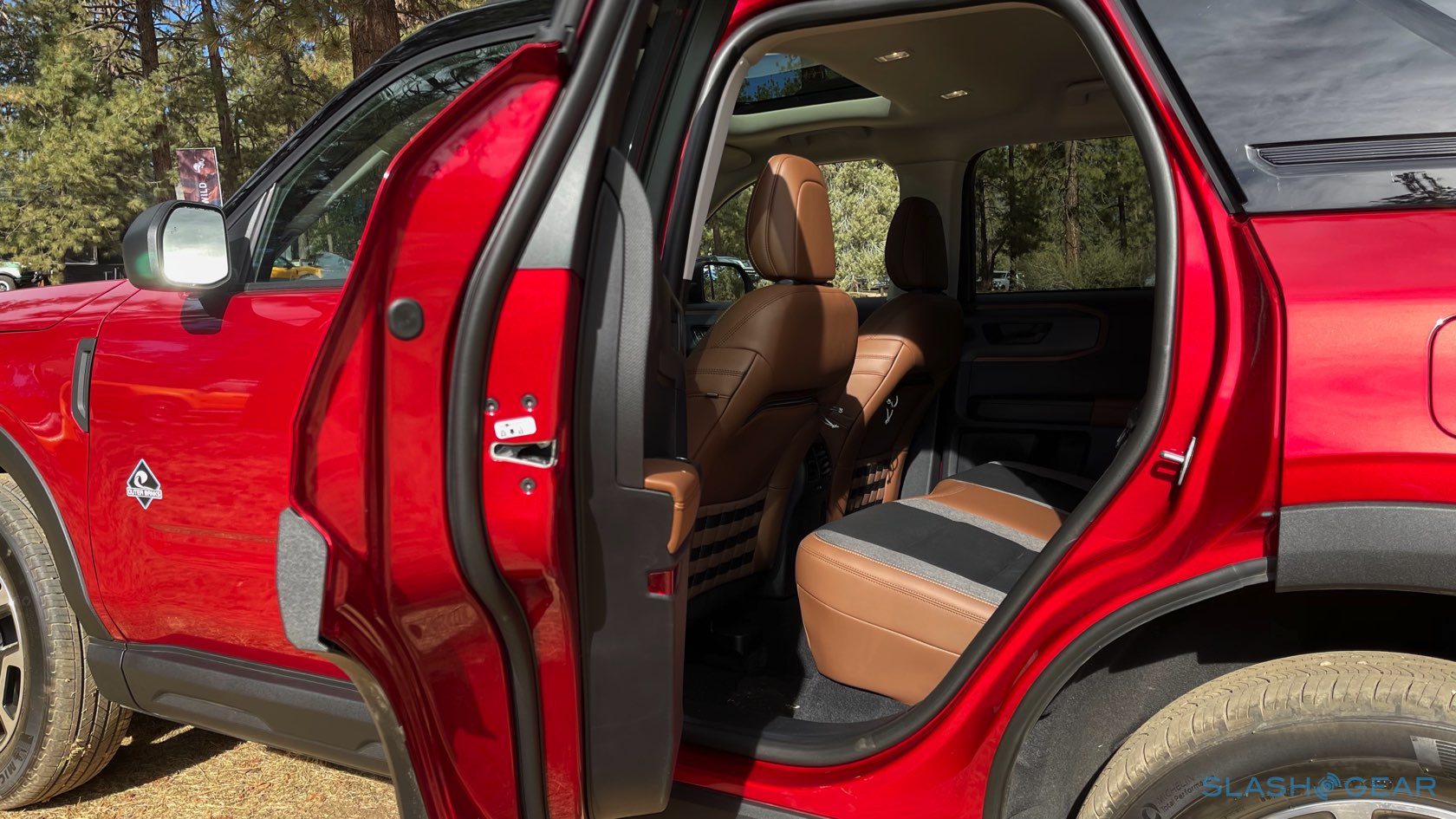 It’s also impressively practical, and the cabin is brimming with thoughtful features. The trunk door has a separate opening glass hatch, handy when loading smaller items without lifting the entire door. THe Bronco Sport offers up to 32 cu-ft with the rear seats up, large enough to accommodate oversized beer coolers and camping gear – or a big family grocery shop. 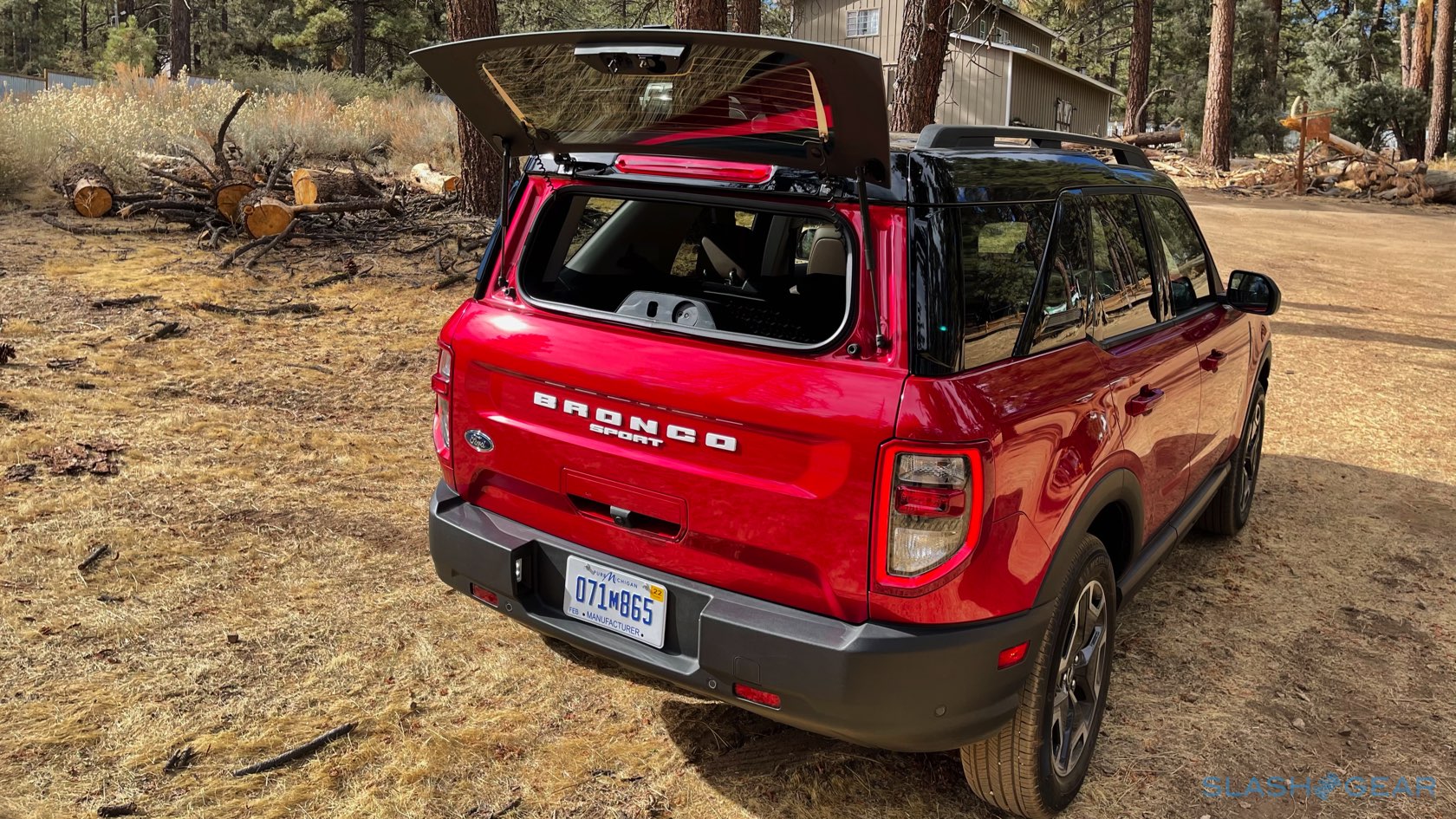 The rear compartment is large enough to store up to two 27.5-inch mountain bikes, thanks mainly to that distinctive roof design. Lifting the back door reveals a pair of adjustable LED floodlights to make loading and unloading in the dark more manageable. The compartment also has carabiner straps, while the front seats have zippered seatback pockets for additional storage. You even get a handy bottle opener in the cargo area. 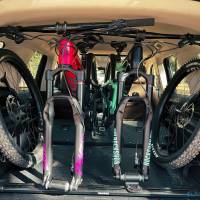 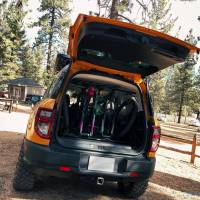 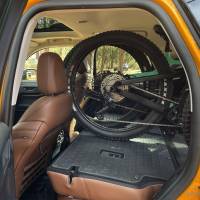 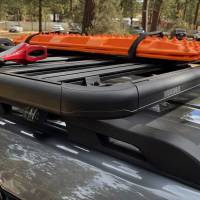 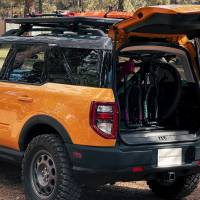 With a base price of $28,155, the Bronco Sport is around $2,000 more than an entry-level Ford Escape S, but you get vintage-inspired styling, standard AWD, and loads of rugged attitude. Standard equipment includes Ford SYNC 3 with an 8-inch touchscreen, 17-inch wheels, a 4G Wi-Fi hotspot, and Apple CarPlay/Android Auto connectivity. 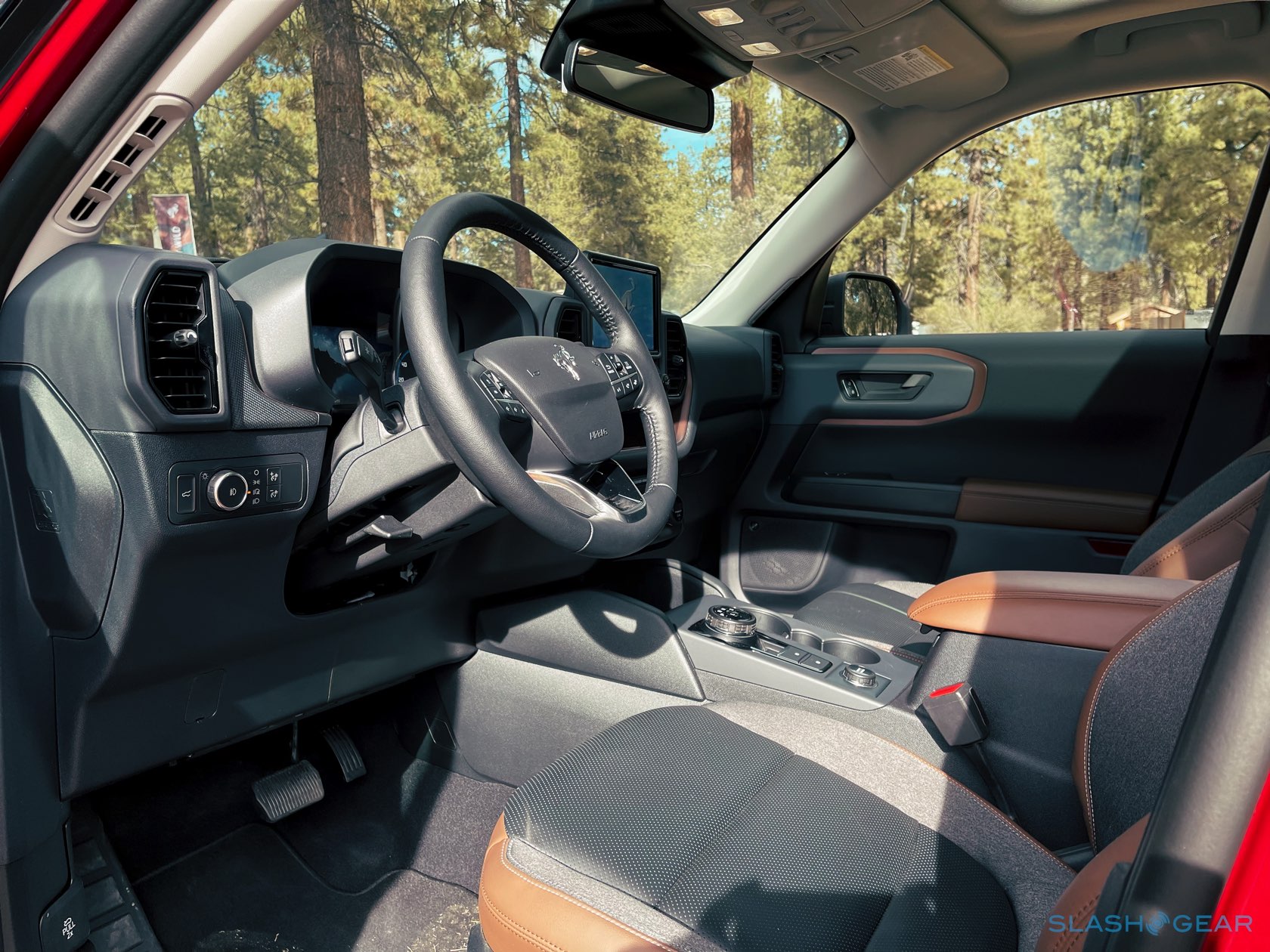 In my opinion, the most desirable trim is the Bronco Sport First Edition, though since it’s sold out as of my writing you’ll have to hope your nearest dealer stumbles across a spare. The First Edition essentially combines the capabilities of a Badlands with the interior of an Outer Banks; that means you get both the larger 2.0-liter engine, and a more refined cabin. It also gets unique wheels and some decal striping on the sides.

Consider me surprised. As it turns out, Ford’s 2021 Bronco Sport is not a softer version of its highly-anticipated Bronco sibling. Instead, it’s a smaller and modern interpretation of the original Bronco, pairing distinctive retro personality with strong capabilities both on and off-road, without sacrificing on the tech and creature comforts we expect from today’s small SUVs. Factor in pricing starting at under $30k, the Bronco Sport undercuts the competition with its potent mix of everyday drivability and competent off-road manners.