2021 Buick Encore GX Review: Familiar to the point of frustration

Few automakers seem to revel in confusing drivers quite like General Motors does, and the 2021 Buick Encore GX is fine example of that. For a start it’s one of two different models Buick offers with the same name: the original Encore, which dates back to 2012, and this Buick GX which is newer, slightly larger, and borrows the platform Chevrolet uses for its Trailblazer.

Then there’s GM’s legendary parts bin sharing. As well as the platform of the Chevy, the Encore GX gets switchgear familiar from GMC and even Cadillac, a pair of three-cylinder turbocharged gas engines snagged from GM China, and an infotainment system that’s variously themed across, well, most of the automaker’s group. 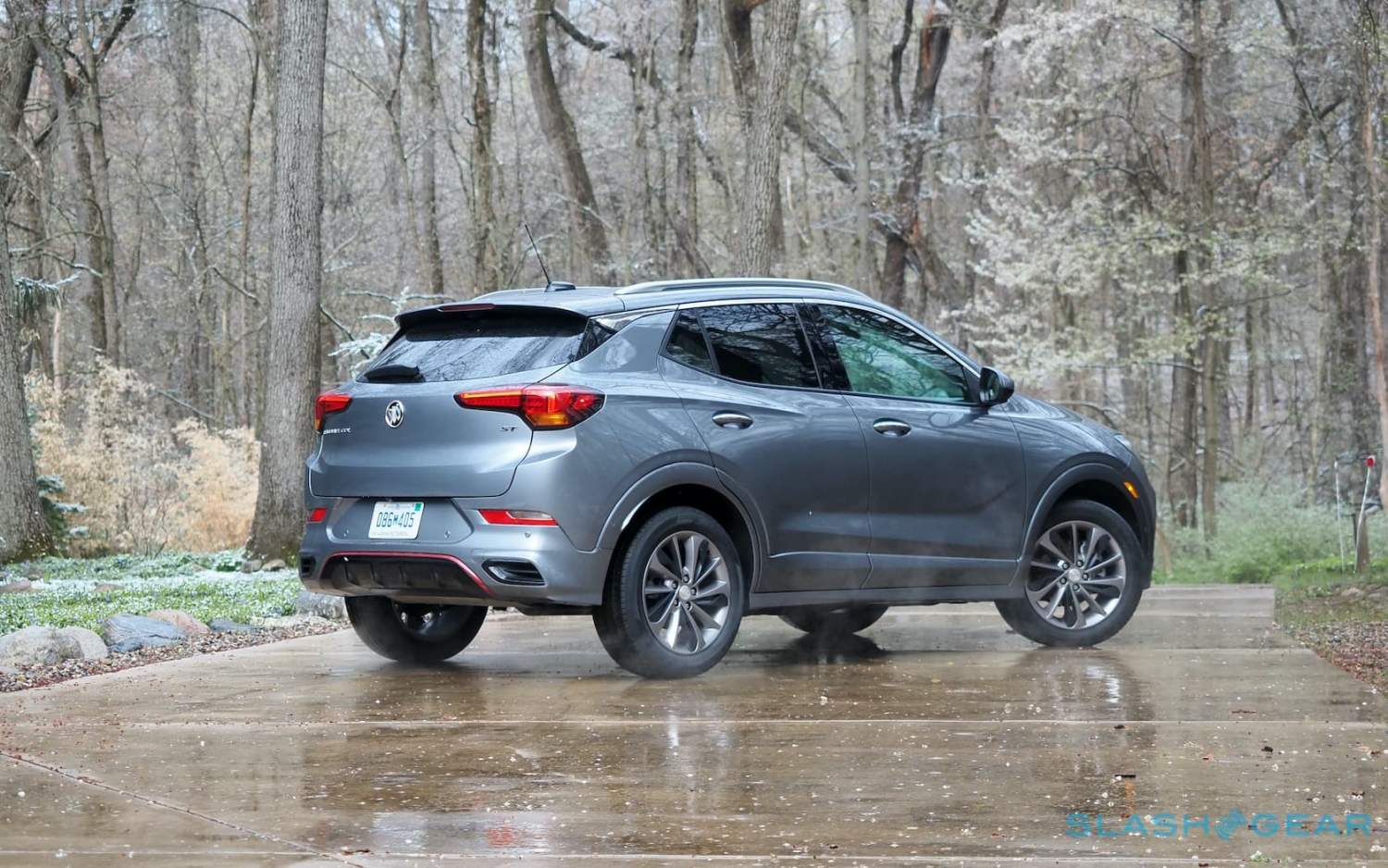 Like is so often the case with Buick and GMC models, it leaves the 2021 Encore facing a significant value challenge right out of the gate. No, its $24,200 starting price (plus $995 destination) isn’t huge – and it’s even $400 less than the smaller, older Encore – but a Trailblazer kicks off at $19,995 all-in. That leaves badge cachet and extras to make up the difference.

The struggle gets harder still when you arrive at the 2021 Encore GX Essence trim which Buick supplied me. That starts at $28,600 (plus destination) but, with various options, had spiraled up to over $34k all-in. For that, you get the larger, 1.3-liter engine, but still only front-wheel drive. 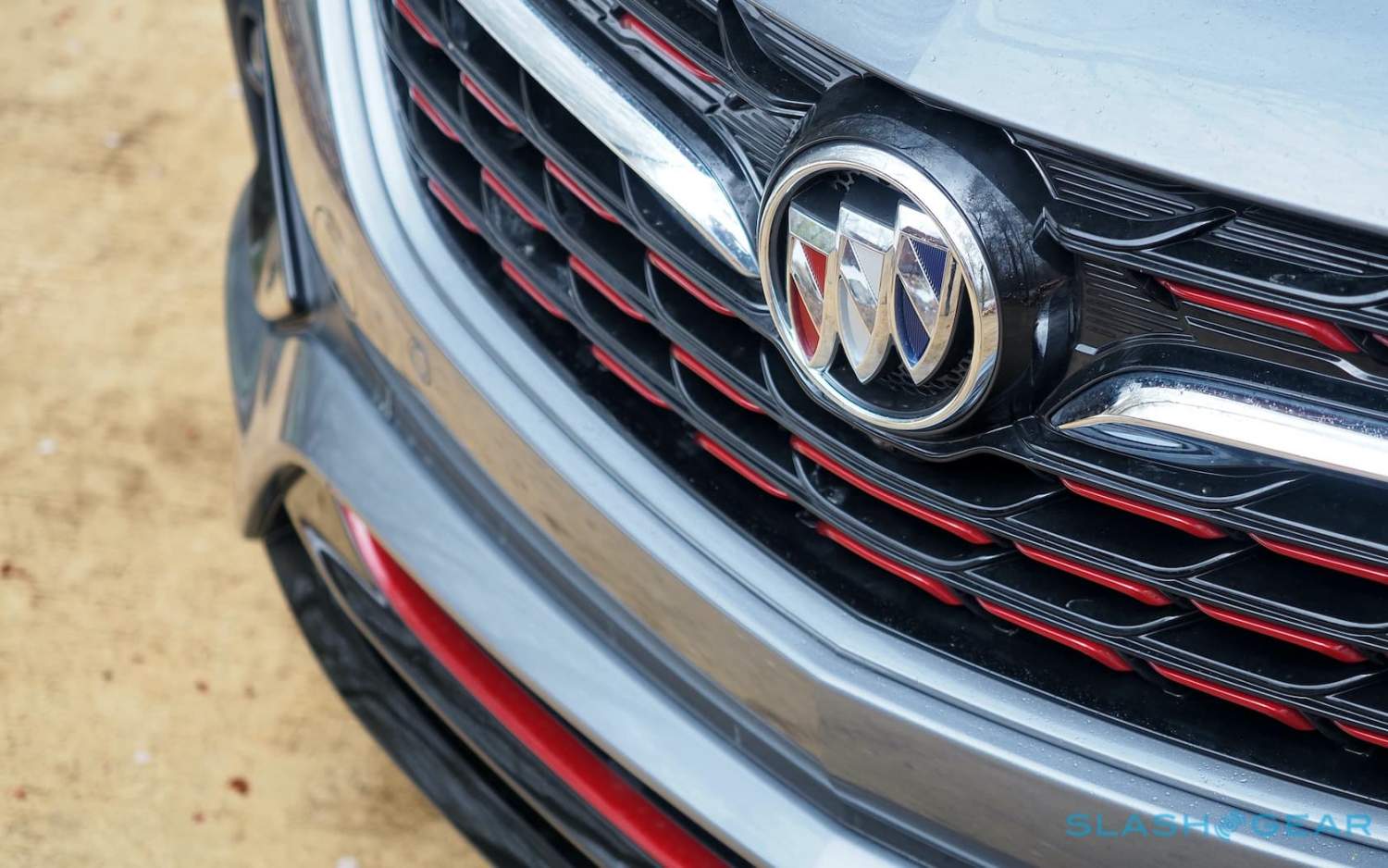 Buick’s crossover at least looks the part, a chunky little thing with not too much chrome and 18-inch alloy wheels. This one has the $650 Sport Touring Package, with different alloys, body-color trim, and red highlights to the grille. LED headlamps, taillamps, fog lamps, and daytime running lights are standard on Essence trim, as are heated power side mirrors and a manual liftgate. $520 adds power to that, too.

I’ll confess, I mistook the 1.3-liter engine for something bigger at first. Its 155 hp and 174 lb-ft of torque will cost you a $395 premium over the standard 1.2-liter turbo, which offers 137 hp and 162 lb-ft, and though I’ve not driven the smaller engine I suspect the upgrade is well worth it. Buick pairs it with a CVT and front-wheel drive as standard, but it’s impressively absent of that rubber-banding feel that some continuously variable transmissions suffer. 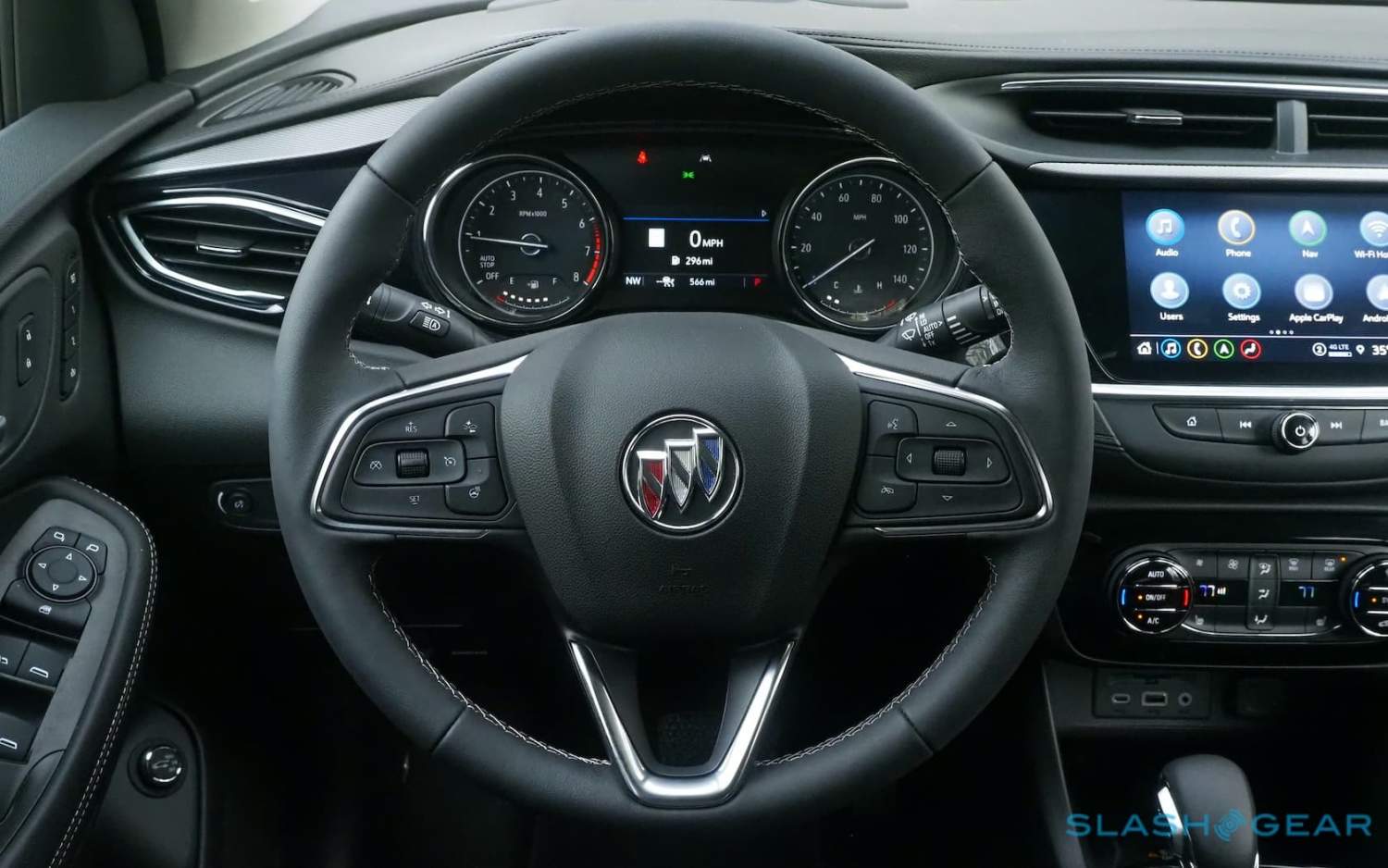 In fact it all sufficiently perky for urban duties: more so, indeed, than the Trailblazer I drove with the same 1.3L. Though it’s not the most refined engine – there’s a fair amount of noise audible in the cabin, even with Bose’s active noise cancellation present – it drives nicely enough, and the CVT is miles better than the example in Toyota’s Corolla I drove recently. Adding AWD is $2k more on the base car – you can only get it with the larger engine, an a 9-speed automatic transmission – and switching between it and FWD is done manually with a button on the dashboard. 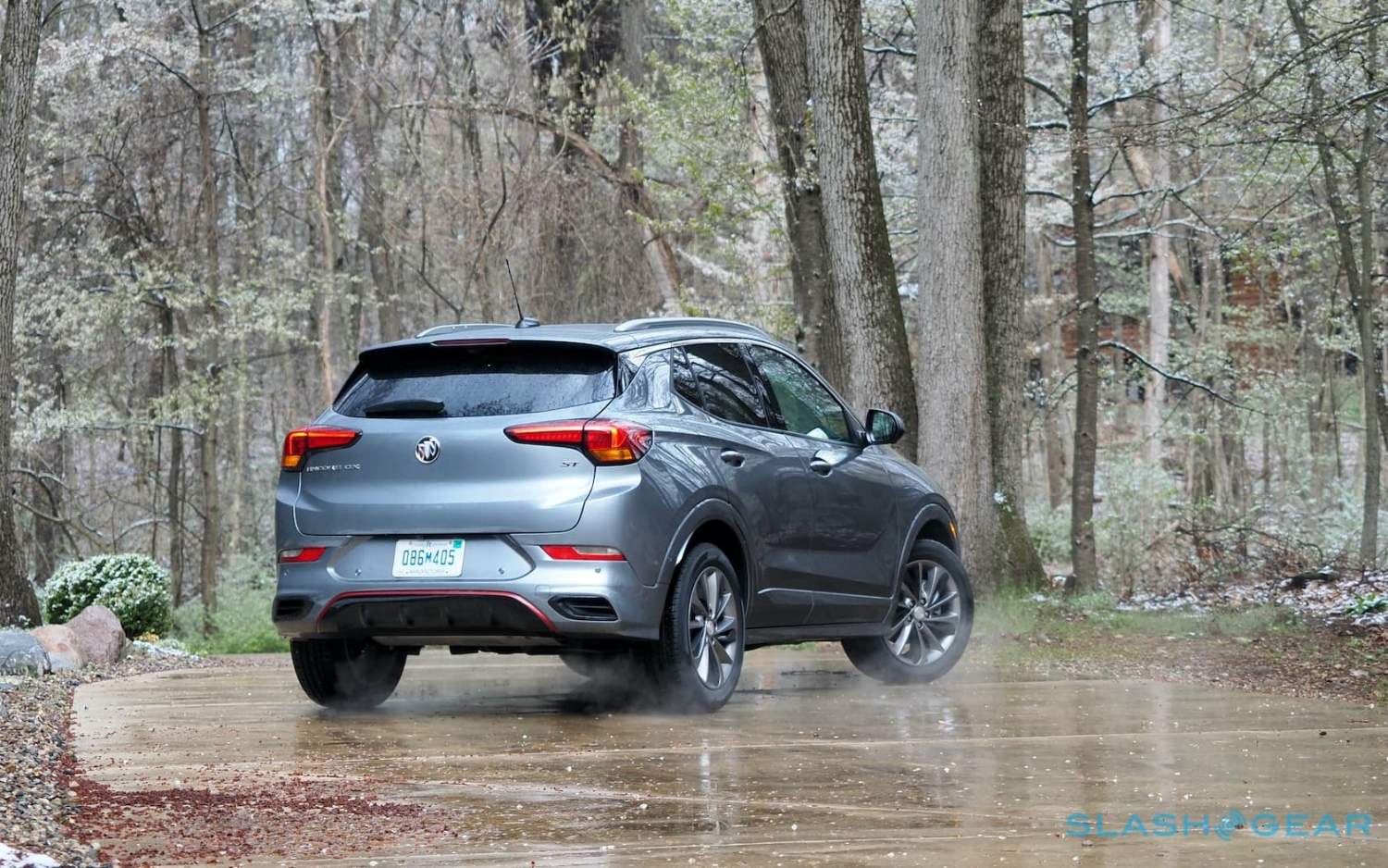 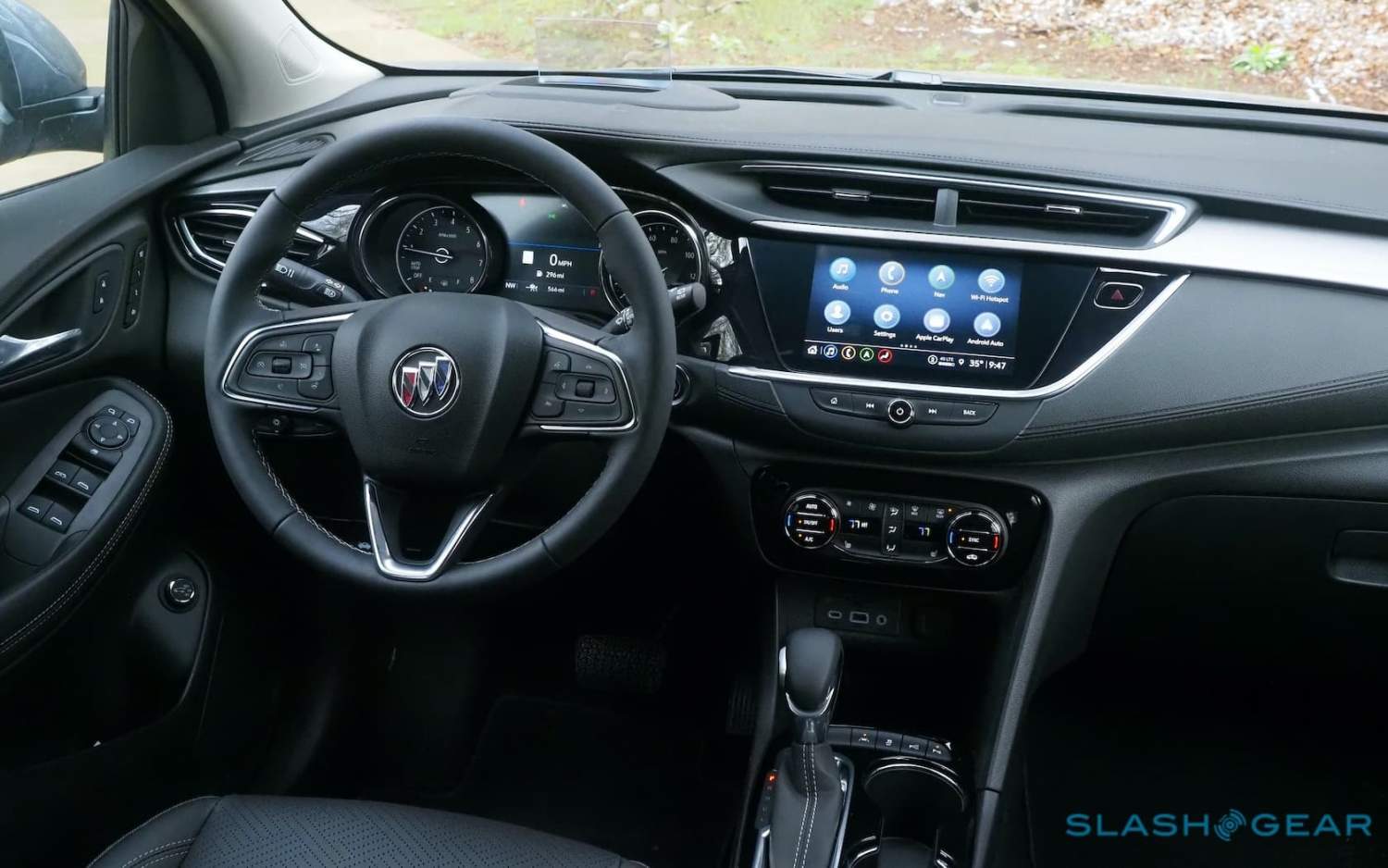 The Encore GX’s cabin feels a little less oppressively-dark than Chevy’s does, though not by much. Essence trim gets power adjustment for the front seats, dual-zone climate control, a heated leather-wrapped steering wheel, leather trim, keyless entry and start, and a useful 120V outlet. The driver has a 4.2-inch display sandwiched between the analog gauges, while there’s an 8-inch infotainment touchscreen with Android Auto and Apple CarPlay support along with baked-in 4G/LTE and WiFi hotspot. 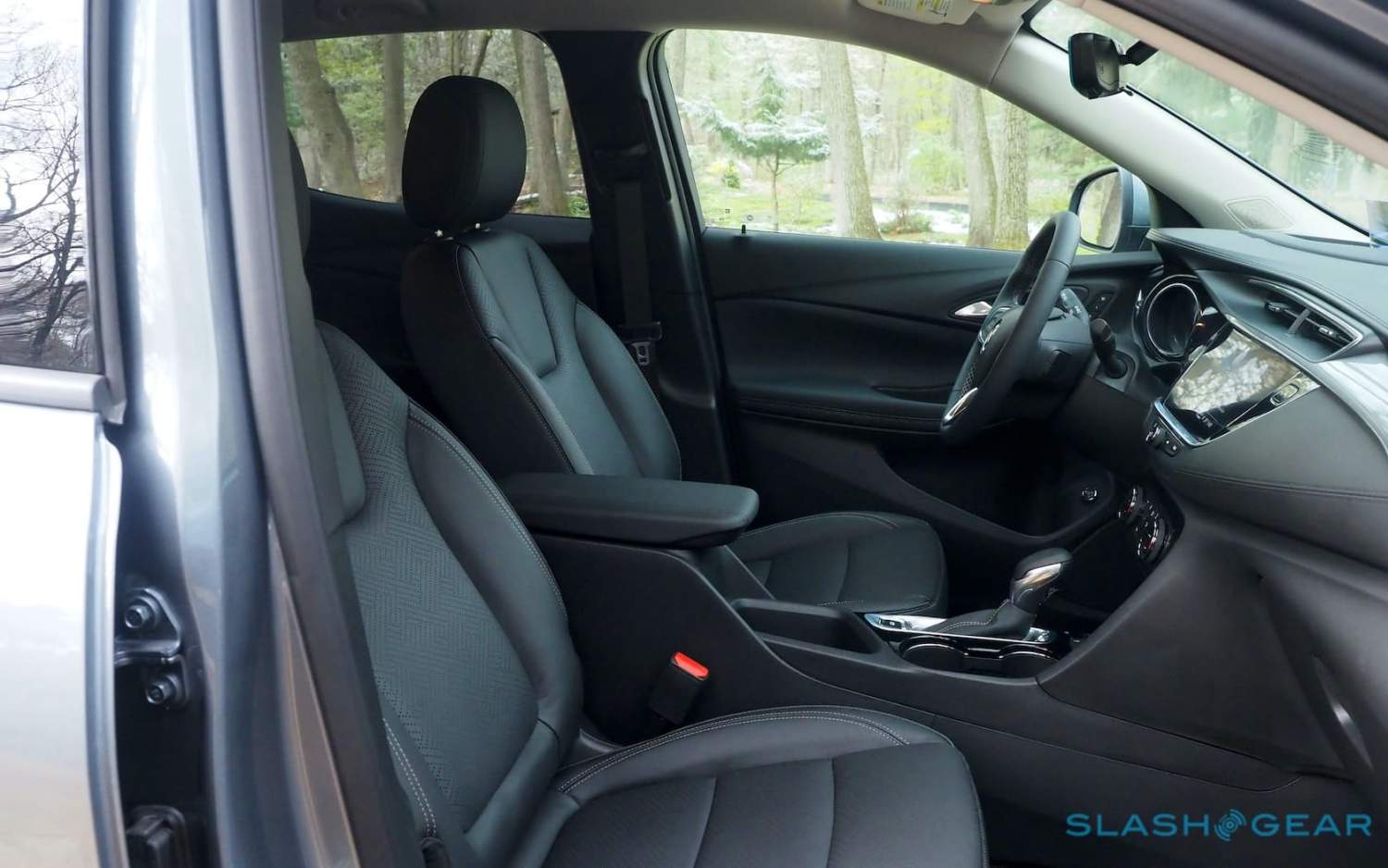 The Essence GX has plenty of USB ports, too, including both Type-A and Type-C in the front and the rear. The $770 Convenience Package adds a front wireless charging pad along with rear camera mirror and rain-sensing wipers, plus automatic parking assistance. The $1,790 Advanced Technology Package throws in a surprisingly high-resolution 360-degree camera, adaptive cruise control, navigation, and a head-up display. The latter is a fairly clunky implementation, mind, with a fold-out reflector rather than the windshield projection most modern systems use. 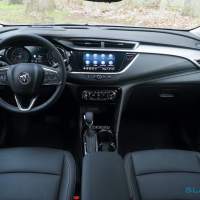 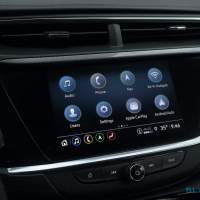 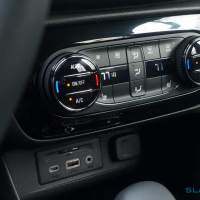 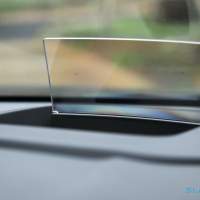 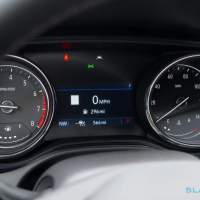 I like Buick’s infotainment system, but that’s no surprise since I’ve liked it in Chevrolets, GMCs, and the Corvette, among other cars. It’s intuitively laid-out and responsive. Elsewhere, though, things aren’t so refined. Some of Buick’s plastics underwhelm, and while key touchpoints generally feel sturdy, they never really live up to the premium billing that the automaker insists goes hand-in-hand with its badge. 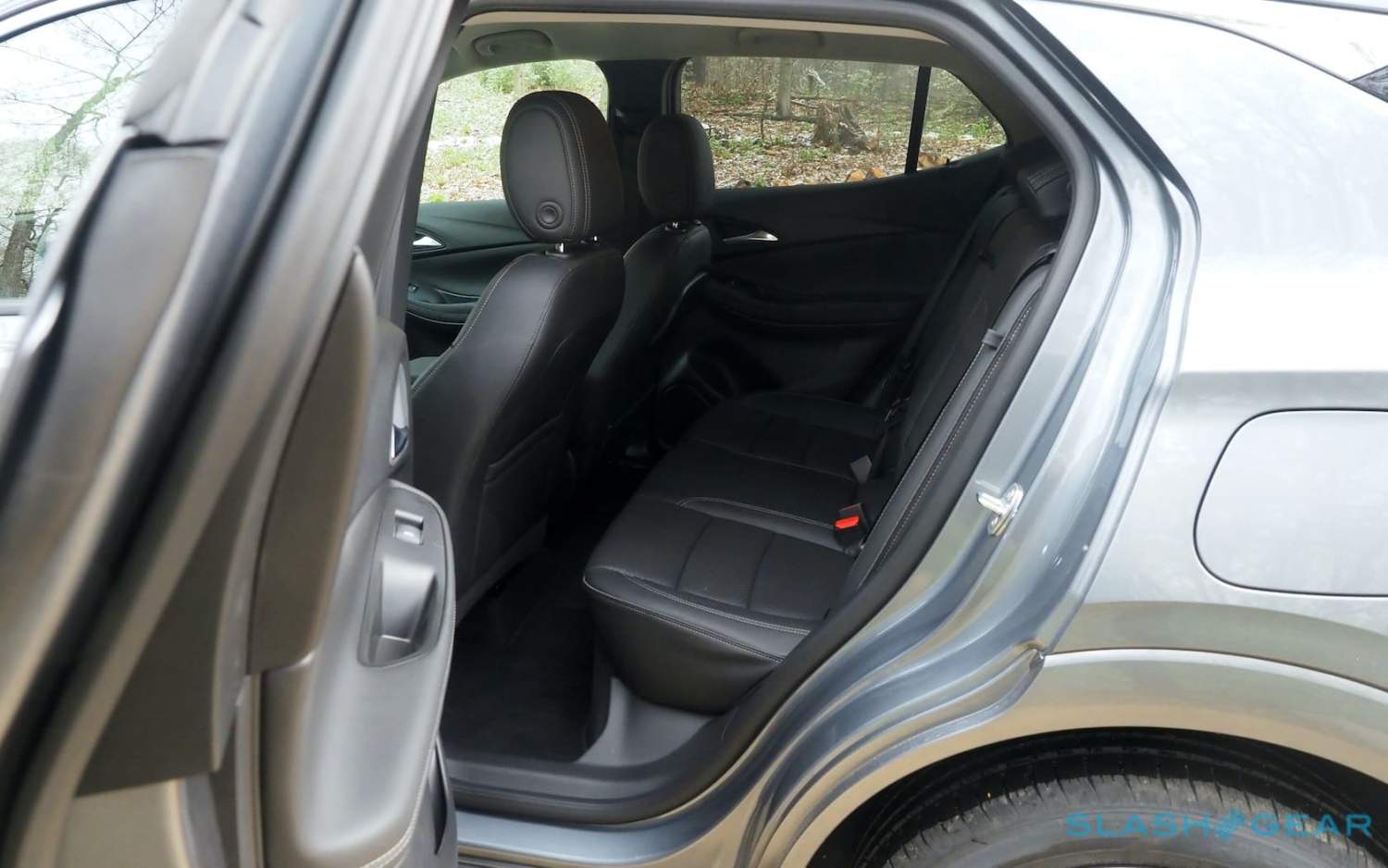 Larger than the Encore, there’s more cabin space too. Rear seating is adult-friendly, both for head and leg roominess, and the 23.5 cu-ft of trunk space expands to 50.2 cu-ft with the split rear bench dropped down. 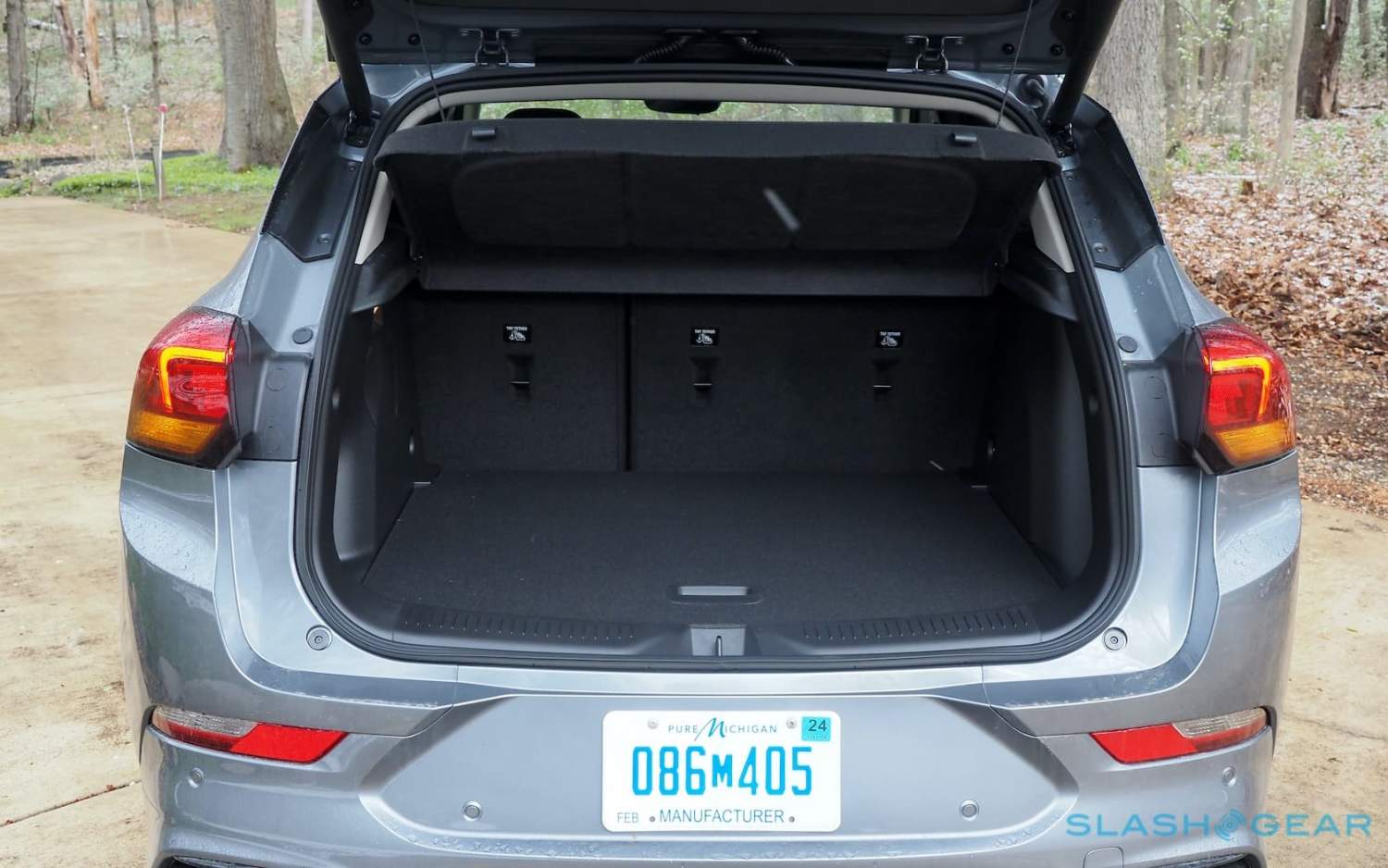 In the confusing array of mix-n-match vehicles that make up GM’s multitudinous brands, it’s easy to get caught up in the weeds making comparisons. That’s even before you get to pitting the 2021 Encore GX against its compact crossover rivals. There, Buick would like you to contrast it with mini-SUVs from Audi, BMW, and Volvo, though to be blunt it simply doesn’t hold up to that sort of scrutiny. 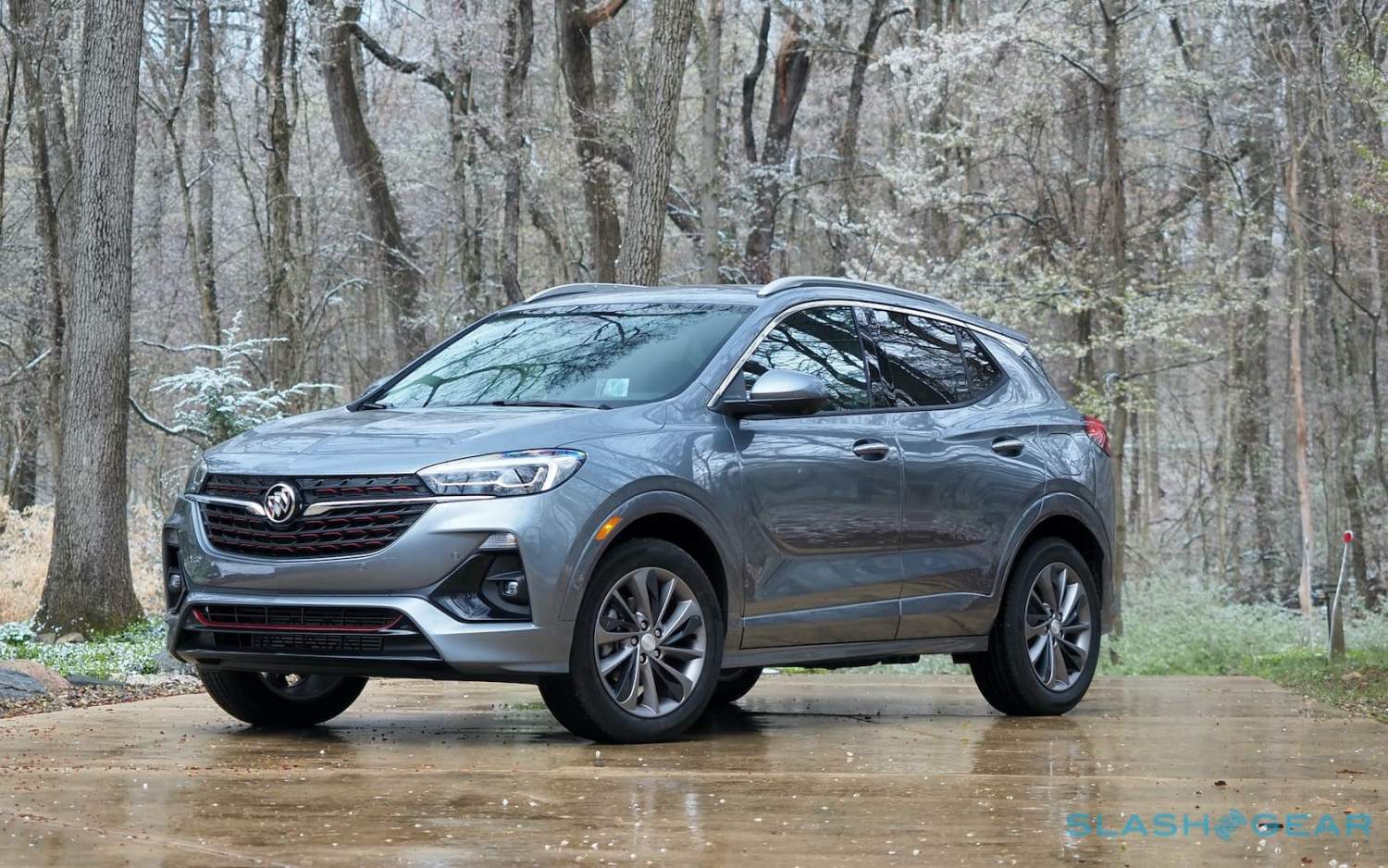 Things get a little more competitive when you cross-shop with the Toyota RAV4, Honda CR-V, or Kia Seltos, though even there I feel like the Buick doesn’t offer a compellingly better experience behind the wheel, or in terms of luxury, economy, or practicality, than that well-esteemed trio. The fact you could get a new 2021 Ford Bronco Sport for less than this particular Encore GX costs is also eye-opening. You’ll spend more on gas in the Bronco, sure, but I know which has more personality, and more curb-appeal.

Honestly, the biggest threat to the Encore GX is probably coming from inside the house; or, at least, the same neighborhood. Chevy’s Trailblazer is so very similar, but markedly cheaper, and I’m not sure the Encore GX’s cabin refinements, nor Buick’s badge prestige, do quite enough to make it a no-question upgrade.