I could spend twelve paragraphs talking about BMW’s grille-of-the-moment, but it all really boils down to whether or not you like the 2021 M440i Convertible’s outsized snout and – should you not – if the fact you don’t see it while you’re driving is sufficient aesthetic distance. Time has blunted some of the shock & awe of the 4-Series’ fascia, though I still think it’s easier to stomach in darker forms as on the M4.

Removing the extraneous chrome definitely helps. The M440i sets its balance somewhere between that M4 and the glitzier 430i convertible. The latter made a feature of the nose; the M440i tones it down somewhat with BMW’s Shadowline exterior trim package, which comes as standard. 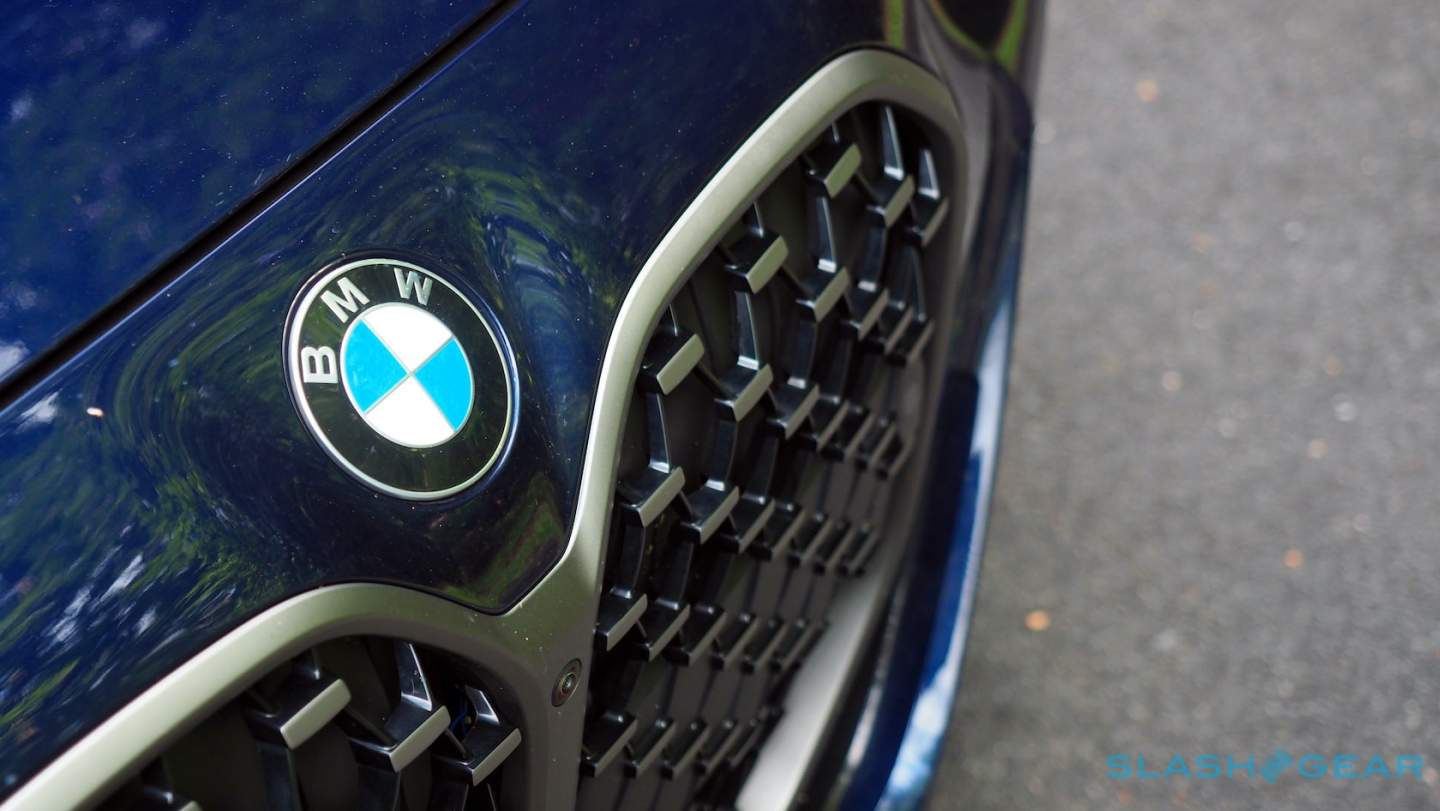 It’d be a shame to allow design alone to sway you one way or the other. Behind the outlandish looks is another example of what BMW, arguably, does best. A potent two-door with refinement on tap, as capable of embracing playful roads as it is at long-distance cruising. 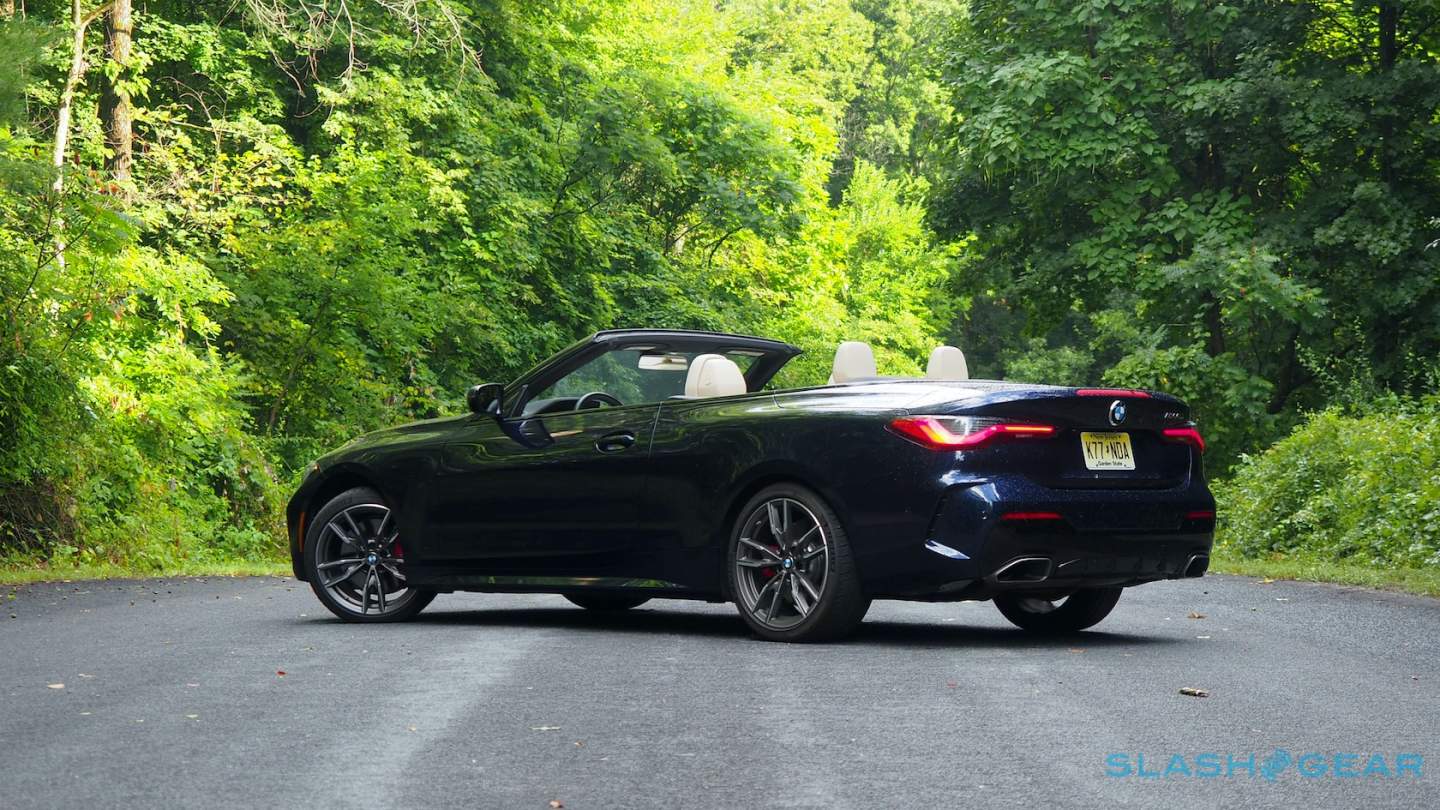 Here, you pay $64,000 (plus $995 destination) for the privilege and, by German automaker standards at least, the options involved are relatively restrained. The blue paint adds just shy of $2k; the Dynamic Handling Package with upgraded 19-inch wheels is another $1,300. $3,700 adds the Executive Package, with heating for the steering wheel and front seats, a head-up display, upgraded LED headlamps with BMW Laserlight, and cabin ambient lighting. You still pay $350 more for ventilated front seats and $500 for the integrated neck-warmers, mind. 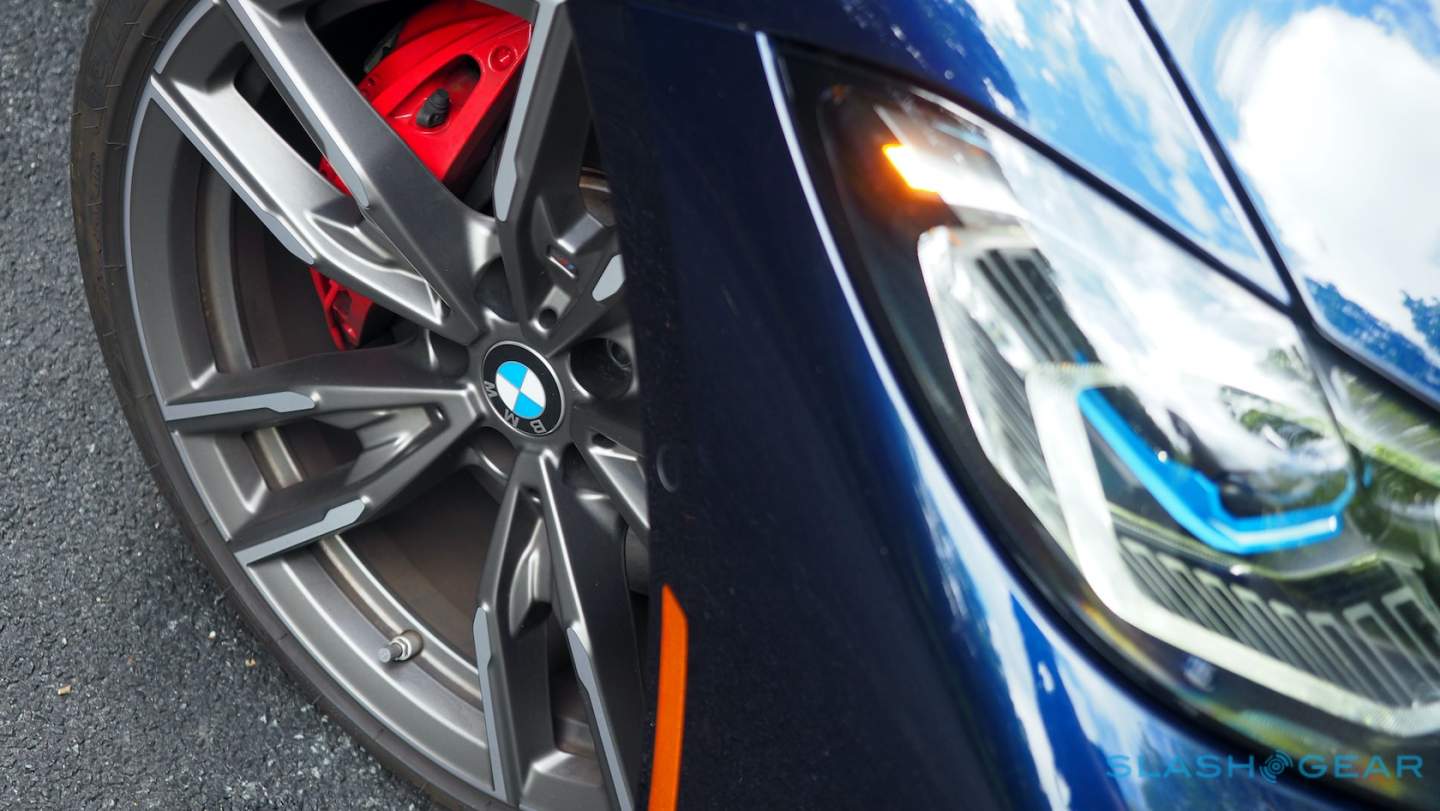 $700 adds the Parking Assistance Package – with niceties like a 360-degree camera and parking distance control – and then there’s $500 for wireless phone charging and $875 for the Harman Kardon audio system. Grand total is $74,870 all-in, conspicuously just north of what a new M4 Coupe will cost you. Of course, the average M4 Coupe also gets heaped with $20k+ of extras; playing in this category is never going to be cheap. 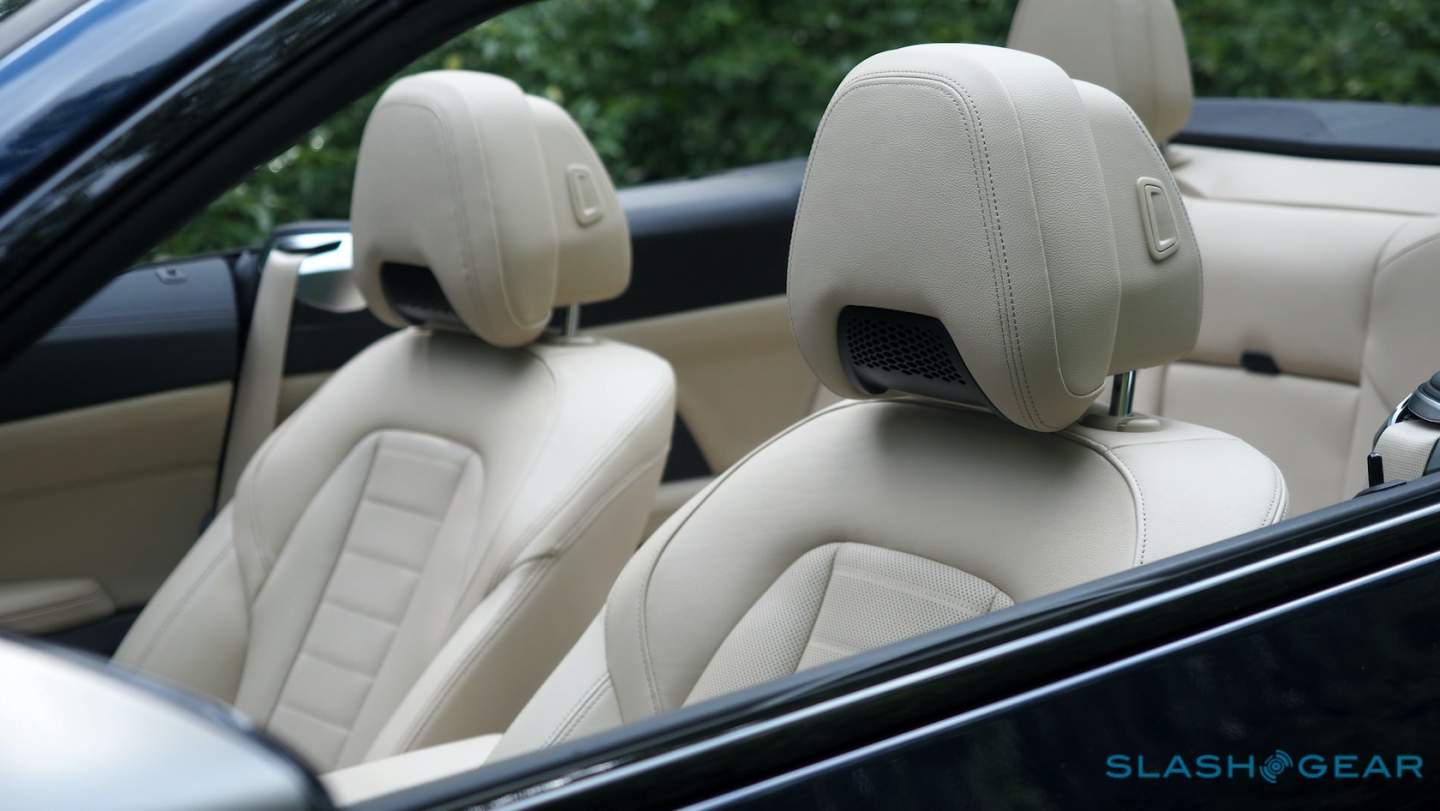 As in that M4, the M440i Convertible gets BMW’s lovable 3.0-liter M TwinPower Turbo six-cylinder engine, here paired with an 8-speed Sport Automatic transmission, M Sport Differential, variable sport steering, and Adaptive M Suspension. You get 382 horsepower and 369 lb-ft of torque, down of course from the M4’s 473 hp and 406 lb-ft, but I’m not sure that’s too great a loss. 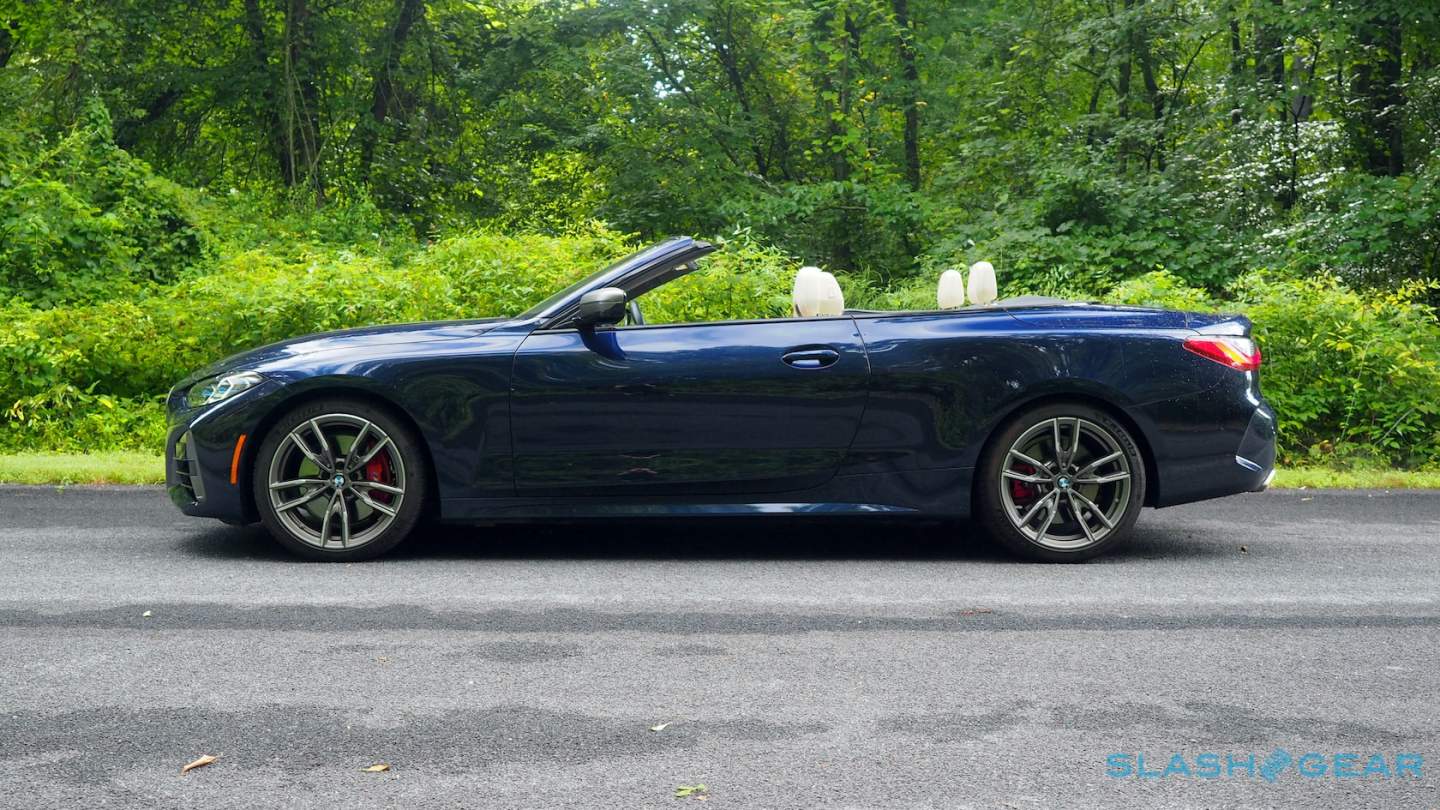 Don’t get me wrong, the M4 is raucous good fun, but this tweener inline-six suits the M440i drop-top nicely. It sounds great – a thrumming reminder of the power on tap, rather than a headache – and the trick suspension does an unexpectedly good job of isolating you from even unpleasant road surfaces. Slicing off the roof of a car usually leaves you with at least some shudder, but BMW’s efforts have somehow left the M440i compliant without being disconcertingly squishy.

In Comfort mode, then, it’ll waft like any good convertible. You can power the roof down at speeds up to 31 mph, that process taking around 18 seconds. It’s a fabric roof, helping keep the car’s center of gravity down, though the insulation is good at keeping out even highway noise, and there’s a proper glass rear window with heating. Gone are the days when embracing open-air motoring also meant suffering with the top up. 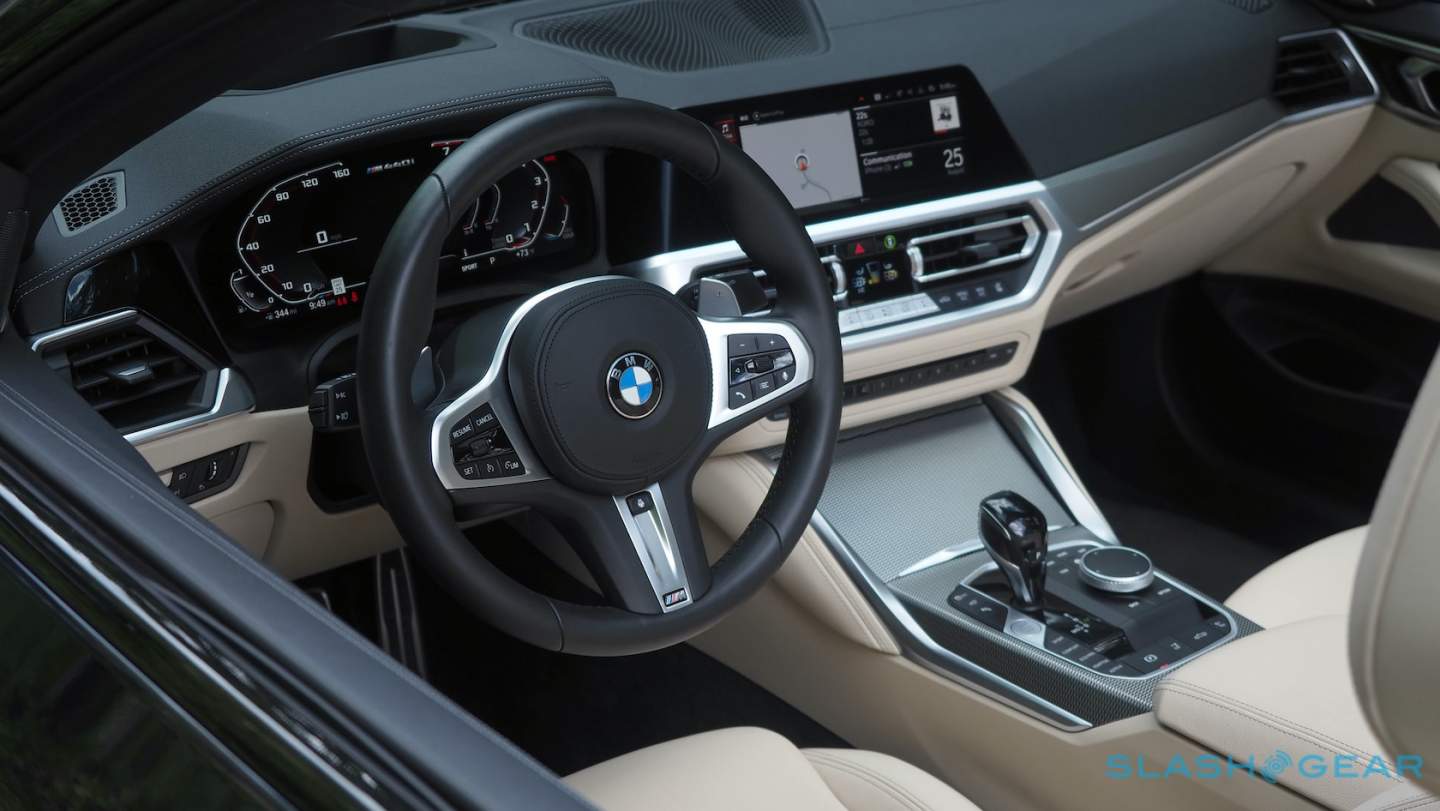 BMW’s 48V mild-hybrid system means the stop-start system is far more refined than many of its ilk – enough that I didn’t instinctively turn it off the first time it kicked in – and can even allow the inline-six to shut off completely when you’re driving slowly. Of course, in Sport or Sport+ mode, BMW puts it to use ensuring you wring as much performance out of the convertible as possible.

Again, it’s the suspension and the differential that play their hand here, though balanced against the M440i’s near-4,200-pound curb weight. Straight line speed certainly isn’t lacking, 0-60 mph arriving in a quoted 5.0 seconds that feels conservative. The xDrive version, with all-wheel drive instead of this car’s rear-wheel drive, trims it to 4.7 seconds. 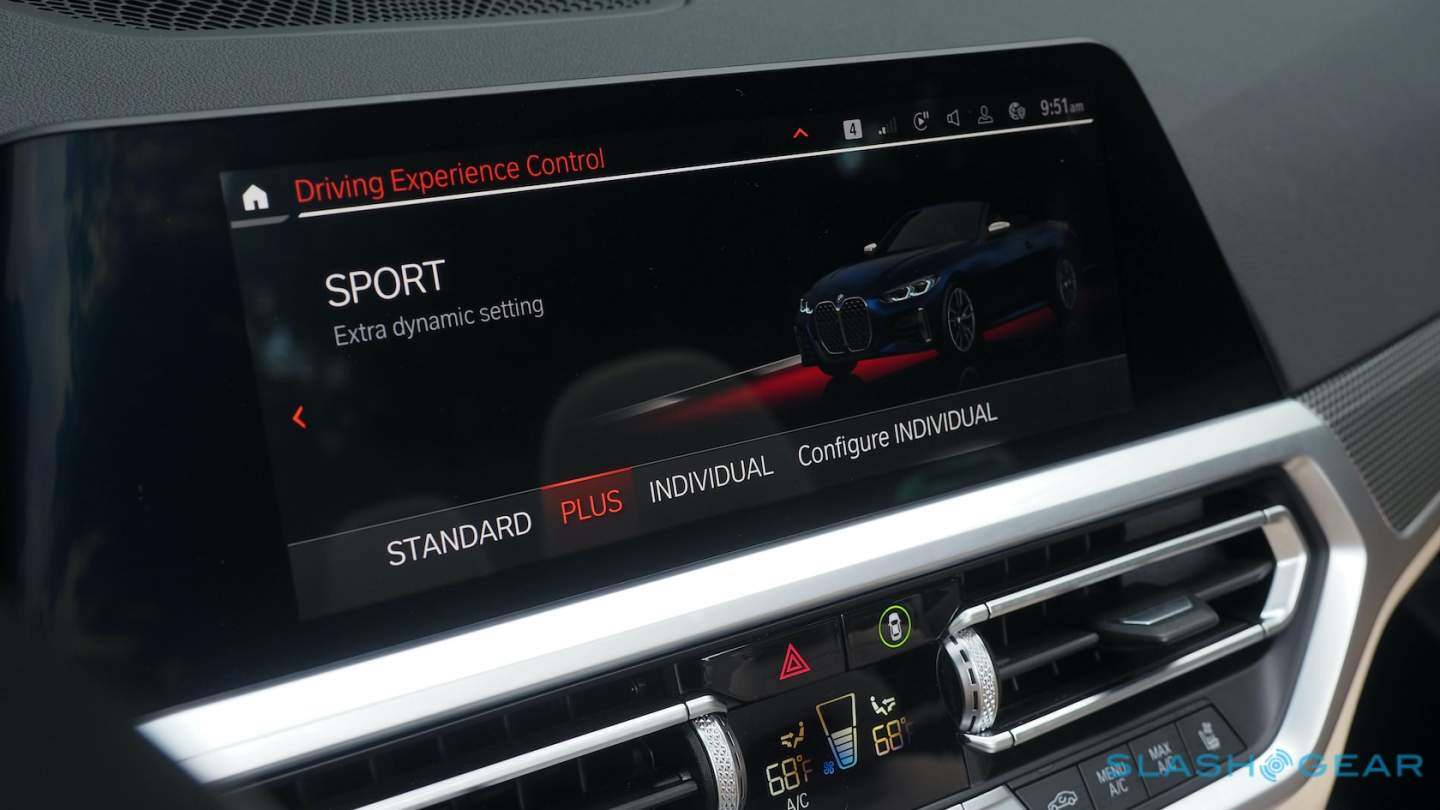 Come the corners, and the M440i is proficient and stable. I wouldn’t say it’s necessarily the most playful car: where the M4 urges you on, the M440i can be hustled but it doesn’t demand it. It definitely feels tuned for those sweeping mountain curves that automakers love to film their commercials on.

Economy is a quoted 23 mpg in the city, 31 mpg on the highway, and 26 mpg combined. In practice, they’re achievable but it’s easy to dip lower if you spend much time in Sport mode. 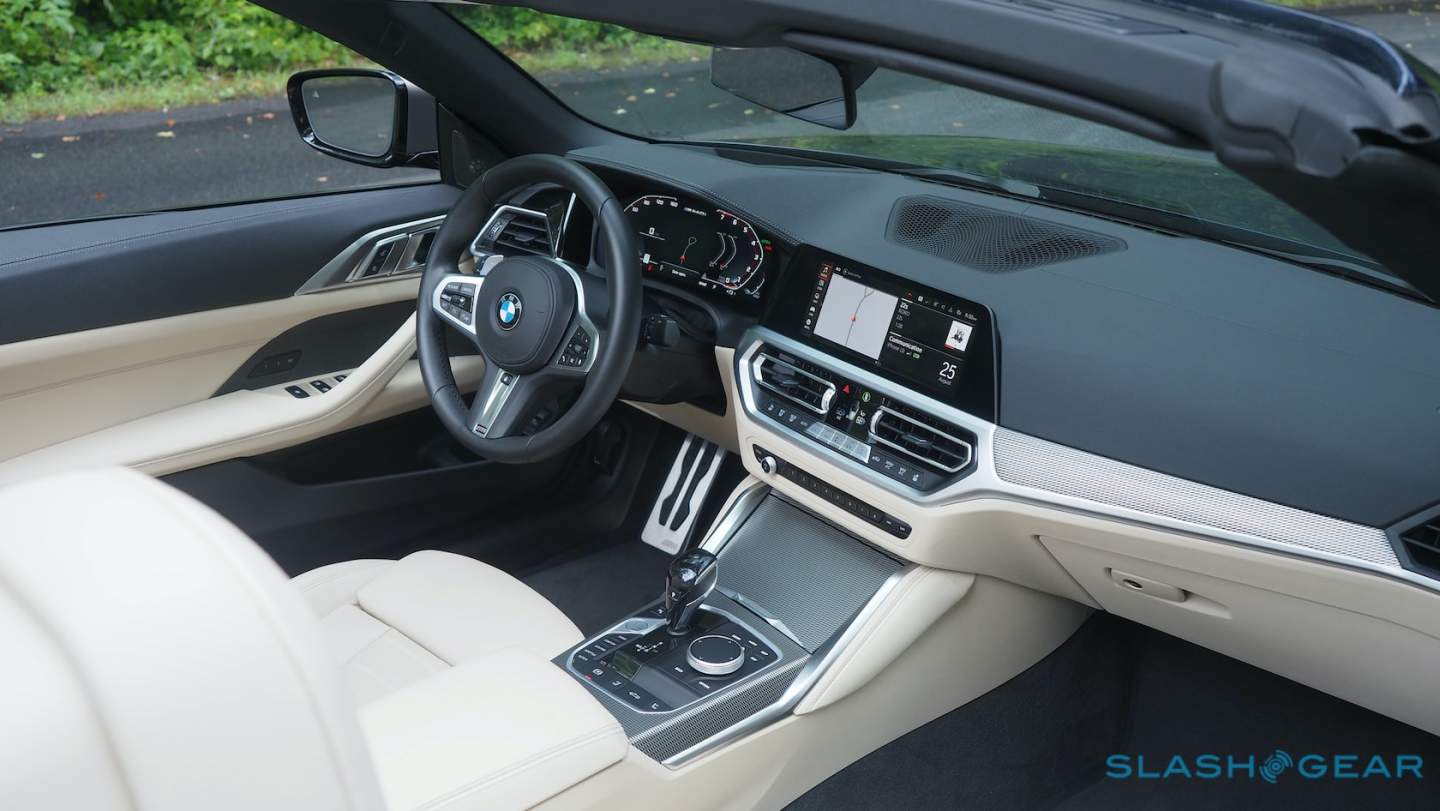 As for the creature comforts, there BMW feels more old-school despite the polarizing exterior. Plenty of leather, a dashboard that’s now eminently familiar from several models in the automaker’s line-up, and standard features like wireless Apple CarPlay and Android Auto, iDrive 7.0 on an 8.8-inch touchscreen, power seats, WiFi hotspot, and SiriusXM. The Executive Package swaps the analog-digital instrument combo for a fully-digital panel, which looks much better. 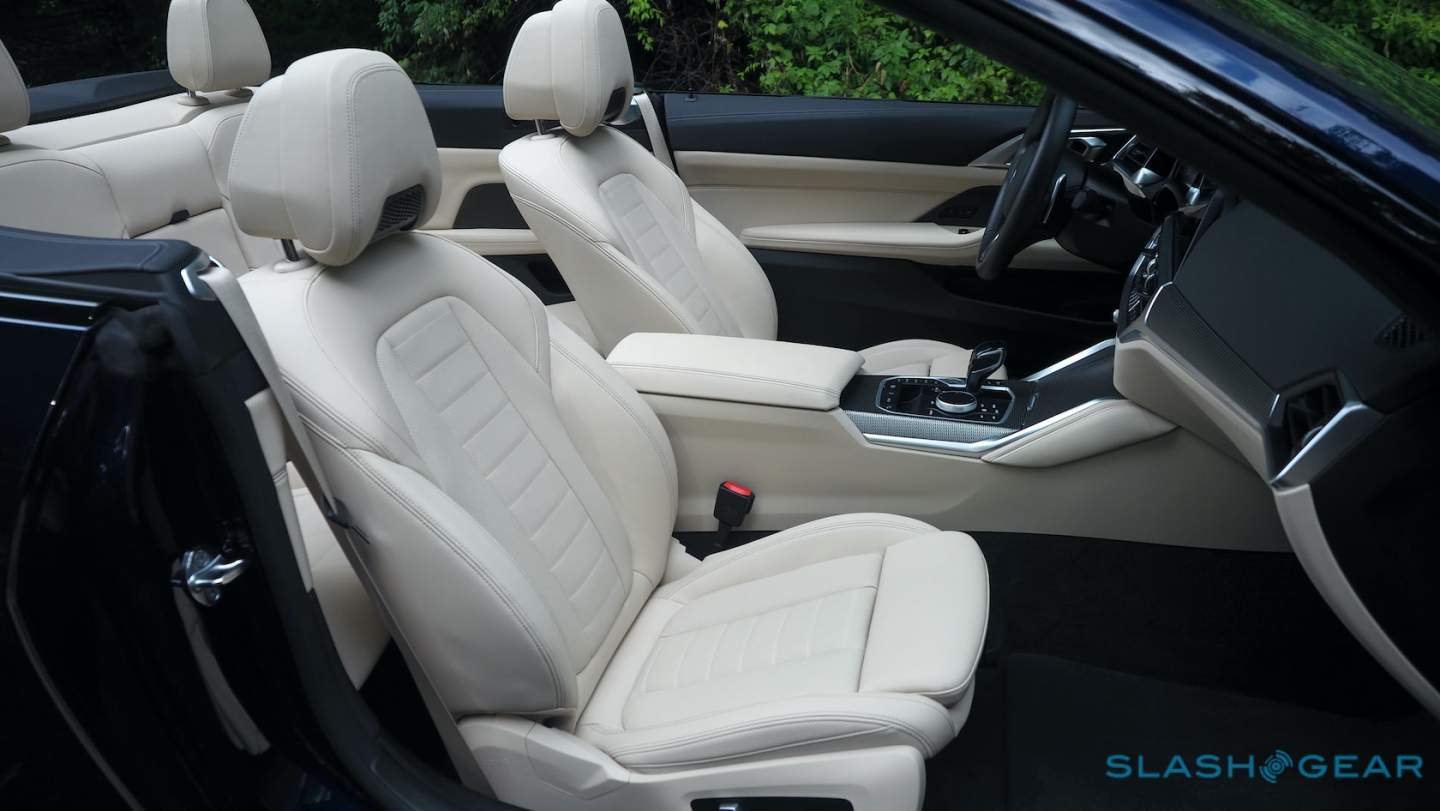 Safety features includes a head protection system, active blind spot detection, BMW Active Driving Assistant, front collision warning with mitigation, and lane departure warnings. Adults will fit in the back, within reason, and even with the roof up the whole thing doesn’t feel entirely claustrophobic.

Though BMW finally has a drop-top version of the new M4, I’m not sure it’s necessary. This M440i Convertible strikes a charming balance between performance and what you want an open-air car for: refined cruising. More power and speed seems like it might miss the point. 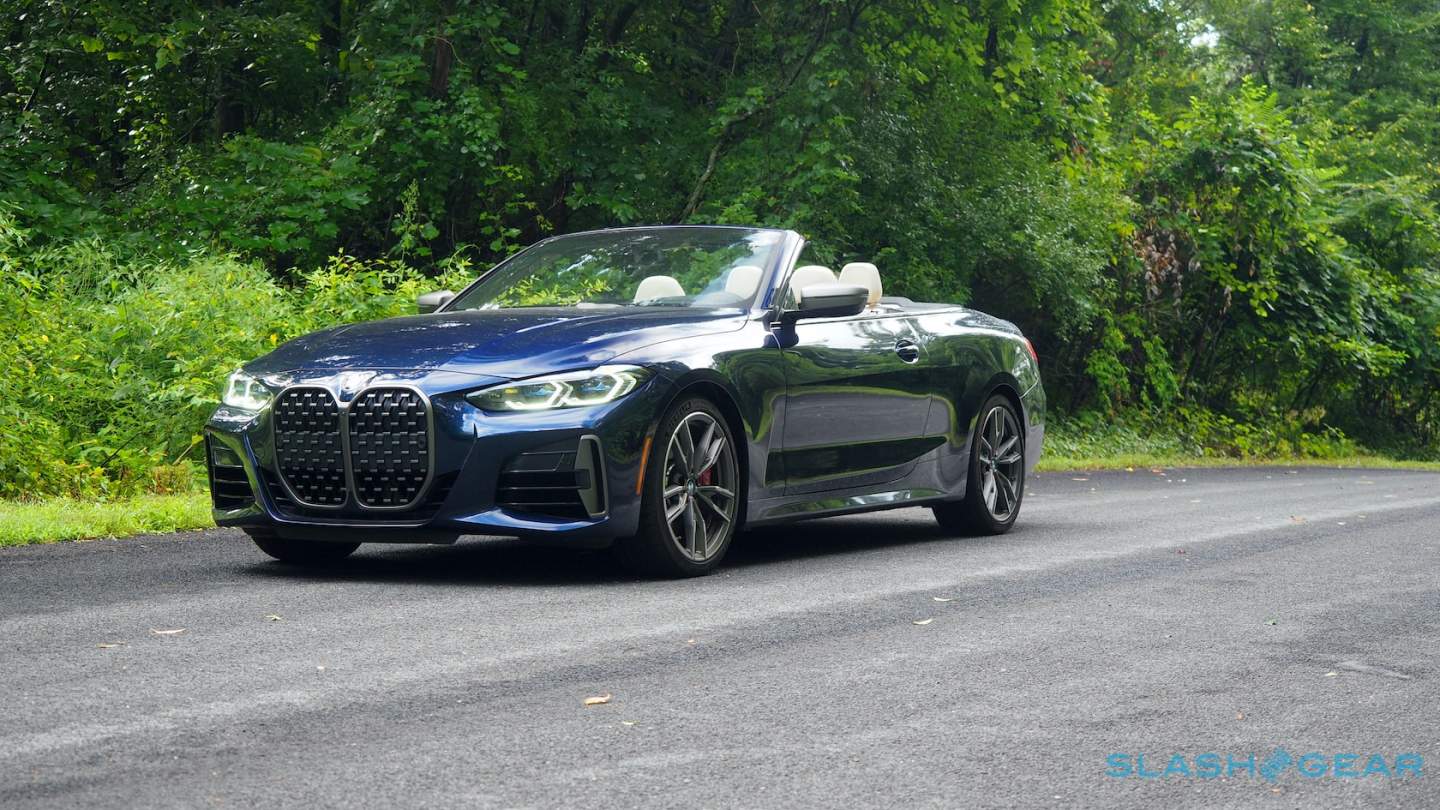 The question, of course, is whether you get enough of that balance in the cheaper 430i Convertible. The overlap between that and this car is certainly clear, and though part of me is reluctant to give up the extra two cylinders and their silky contribution to the M440i, the sacrifice isn’t too great overall.

Think of it, then, as levels of treat rather than a black & white decision either way. The BMW M440i Convertible is enough M car, and enough open-top cruiser, and – grille aside – isn’t going to disappoint anyone with its blend of tech and comfort.