Taste is subjective. That became my mantra, snug behind the wheel of the 2021 BMW 430i Convertible, as I surreptitiously watched the reactions of the people around me at the 4 Series’ substantial snout. Not since the Bangle years has the German automaker found itself at the heart of such styling controversy, a furore that threatens to overshadow this drop-top before you even get to the new fabric roof.

The handiwork of former BMW design chief Chris Bangle has, ironically, gained enthusiasts in the intervening years; his divisive aesthetic is a little less challenging at all these years’ remove. I’m wary to predict whether or not the automaker’s current fetish for oversized nostrils will prompt the same rethink in a decade or two. 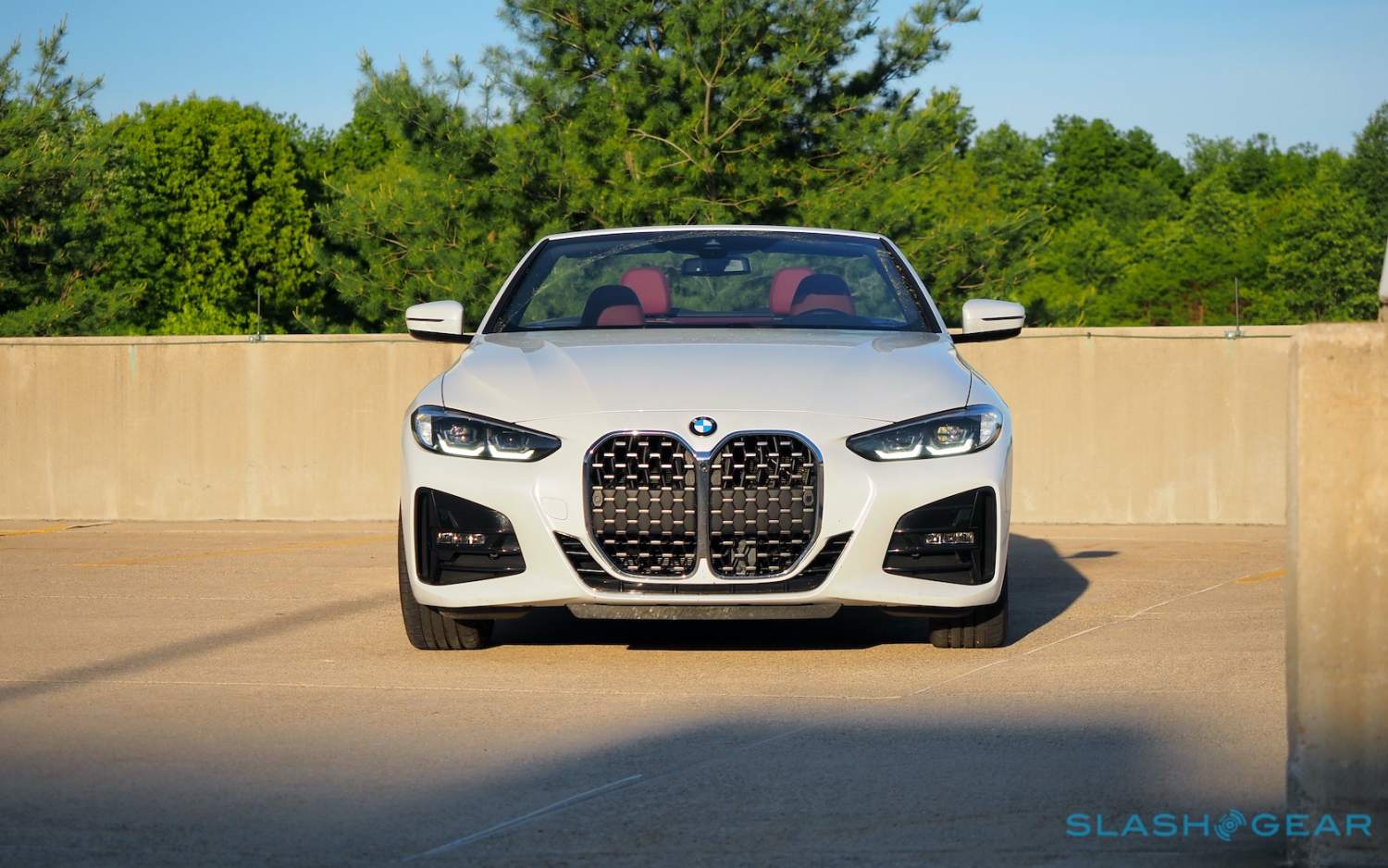 If you want attention, anyway, the 4 Series Convertible is a good way to get it. Particularly in this Mineral White Metallic, the slightest of sheens helping elevate it from the usual white paint-jobs. I’m not a fan of them normally, and honestly I’m not sure it does the 430i’s surfacing any favors; there’s something slab-sided about it, while darker colors like on the 2021 M440i Coupe I drove earlier in the year seem more flattering. 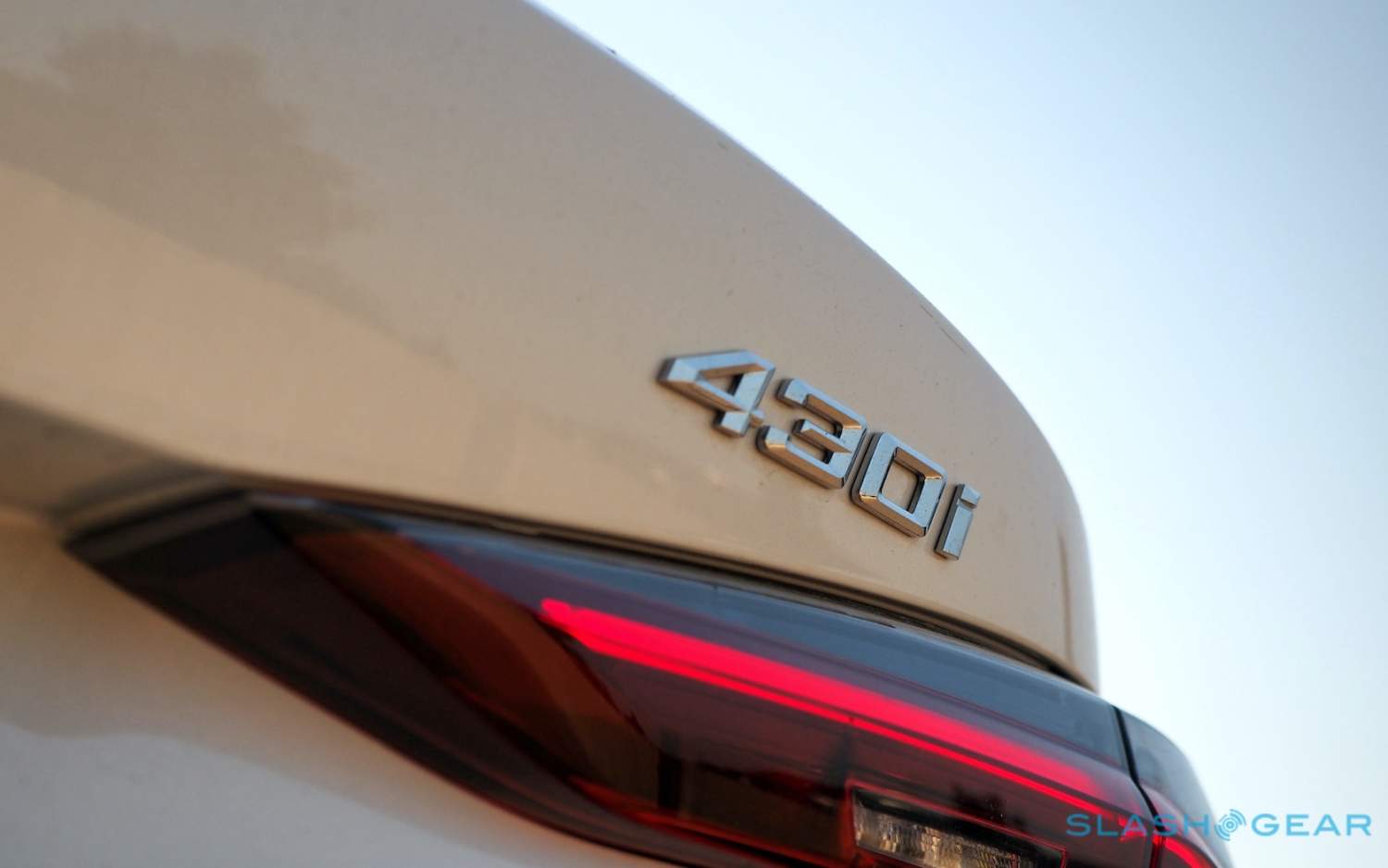 Once you get past the very front, things become fairly ordinary. The larger front lower intakes and black tweaks are part of the M Sport pack, a $3,800 option atop the 430i Convertible’s $53,100 (plus $995 destination) starting price. It gets you nicer 18-inch wheels along with an M steering wheel, too. 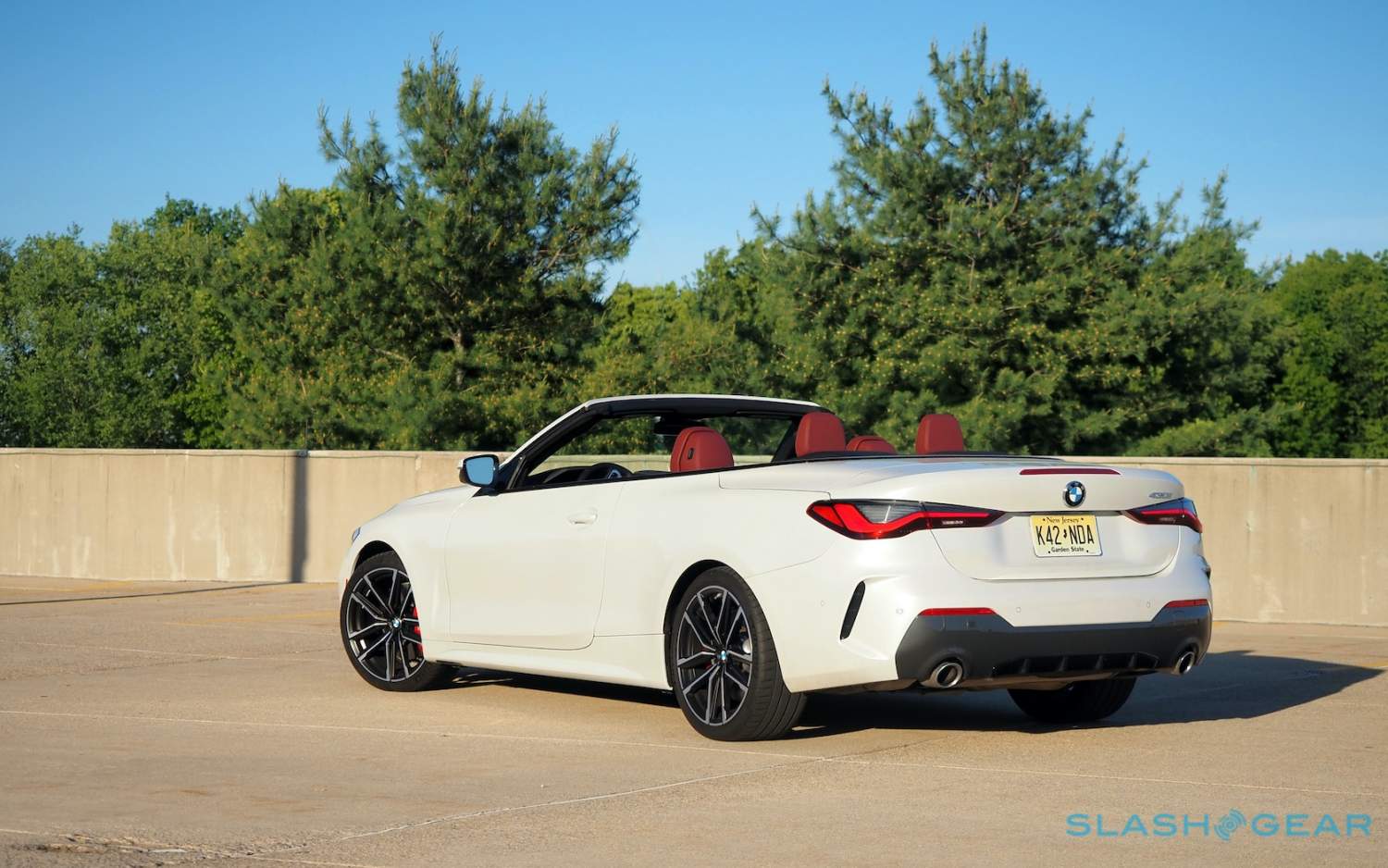 The big change for this generation of convertible is the roof, with BMW switching to a soft-top from the old folding hard-top. Frankly there’s no great noise penalty incurred for that, and you still get a heated glass rear window, but it’s 40-percent lighter than the old top which helps keep the center of gravity down. You can open it and close it at speeds up to 31 mph, a process which takes about 18 seconds of well-orchestrated panels and flaps opening, shifting, and closing again.

I’m not much of a convertible person, if I’m being blunt. I’m pale, burn easily, and don’t really like the attention. Still, out on the back roads with the roof down and the optional neck warmers built into the headrests taking the edge off the early morning chill, I could begin to see the appeal. 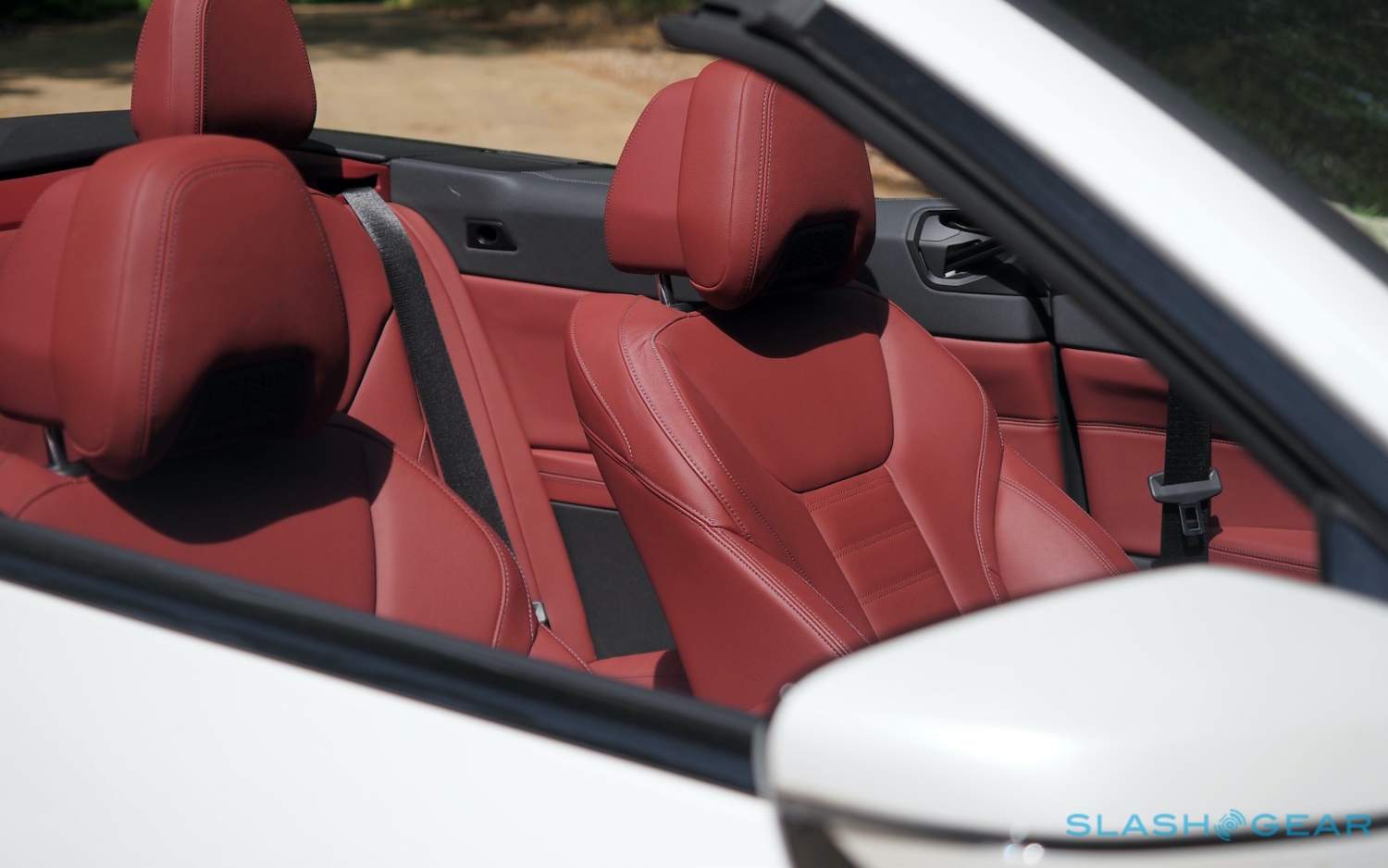 Those warmers are $500, and you’ll pay the same again for heated front seats. Those in the rear can count on proximity and shared body-heat to keep them warm; it’s snug back there, unless you have child-scale legs. A heated steering wheel is $190.

Slicing off the top also leaves less between you and the 2.0-liter turbocharged 4-cylinder engine’s soundtrack. Yes, it may not be a flat-six, and may “only” bring 255 horsepower to the party along with 295 lb-ft of torque, but honestly they’re plenty in practice. The eight-speed automatic transmission is fast and picks its ratios with aplomb, and if you hit the Sport button and shove the gearstick into “S” mode there’s a pleasing rasp from the tailpipes to go along with the more eager driving dynamics. 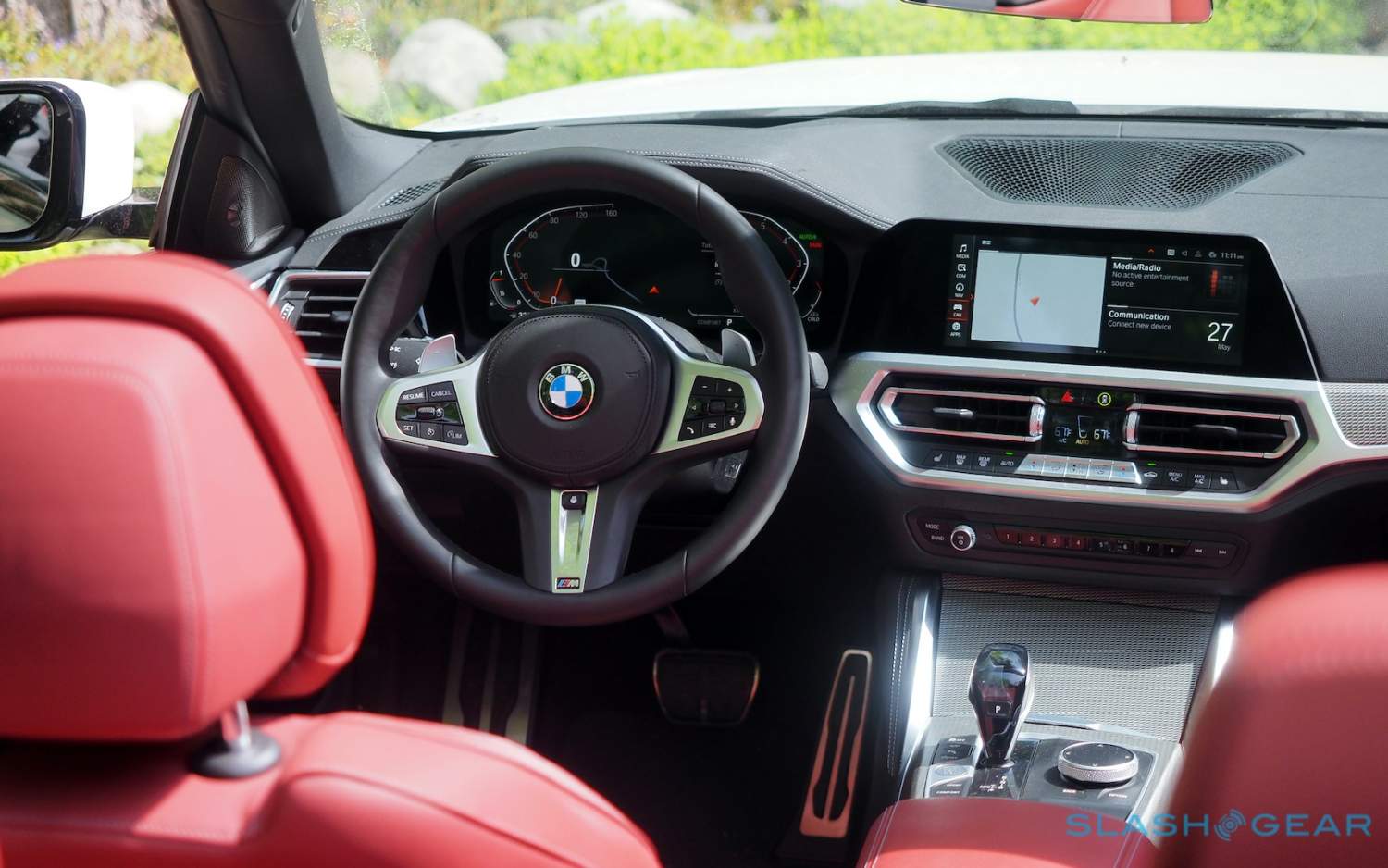 0-60 mph comes in a quoted 5.9 seconds, and there’s something innately pleasing about a rear-wheel drive two-door with BMW’s adroit suspension setup. Corners are handled with a flatness that encourages a little extra pace the next time, though the slightly distanced feel through the steering wheel I found in the M440i carries over to this droptop, too. 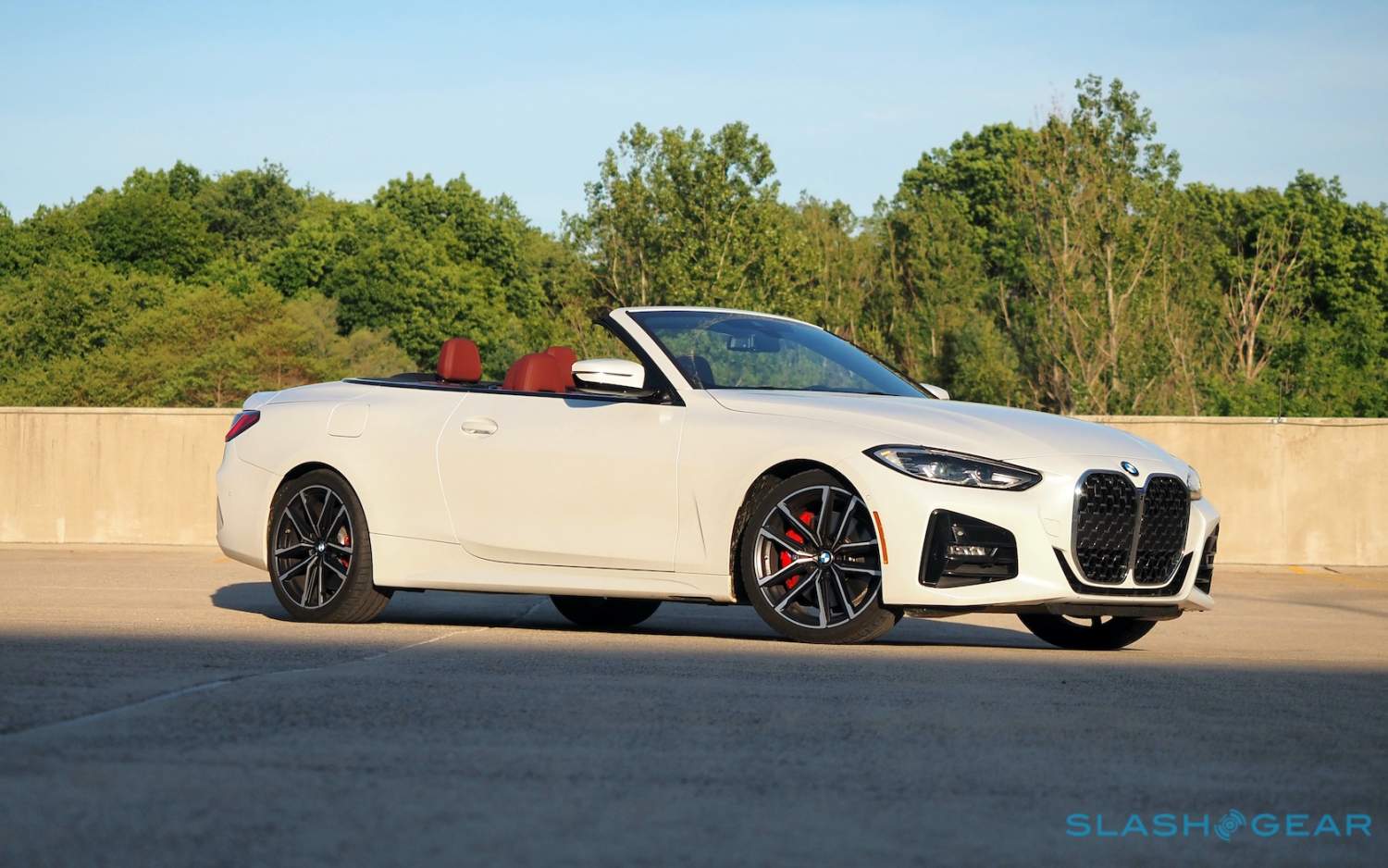 It’s easier to forgive in a car made more with cruising in mind, however, and in Comfort mode the 430i Convertible slides along serenely. Michigan roads aren’t exactly known for their perfect finish, but the BMW did its level best to iron out things with surprising success.

Indeed it’s oddly livable-with, assuming you don’t get relegated to the rear bench. The 9.0 cu-ft trunk – up 1.2 cu-ft from the old model, another side-benefit of the switch to a soft roof – is reasonable, while the 24 mpg city / 33 mpg highway / 27 mpg combined fuel economy is not only solid but readily achievable, too. 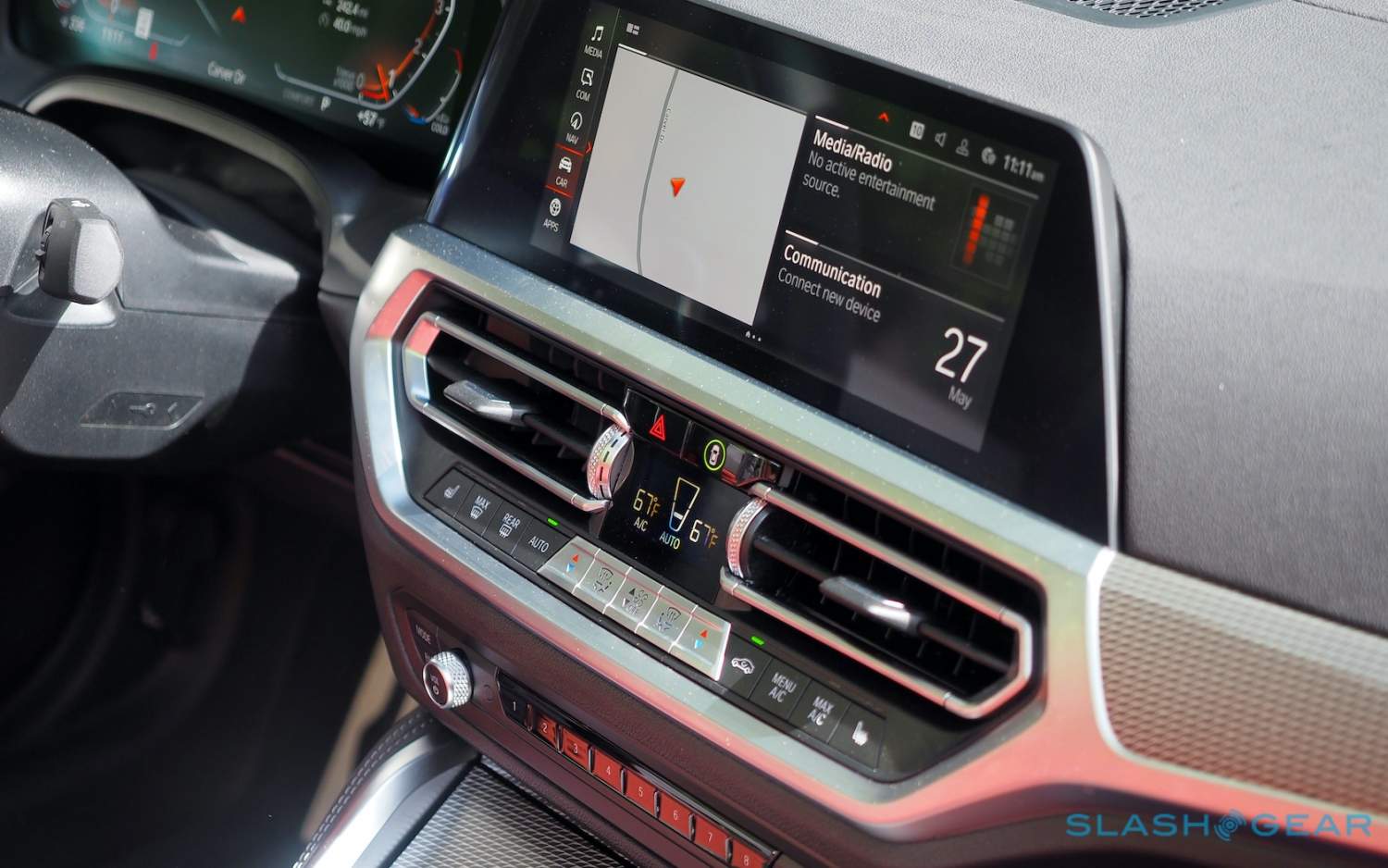 On the tech side, BMW’s cabins are a familiar quotient by this point: you’d be hard-pressed to tell which Series you’re in at first or even second glance. An 8.8-inch center touchscreen for iDrive 7.0 is standard, as is a 5.1-inch instrument cluster (with a larger, fully-digital version a worthy upgrade for $750; that also adds you navigation). There’s wireless Apple CarPlay and Android Auto, adaptive cruise control, blind spot warnings and lane departure warnings, parking sensors, and frontal collision warnings.

As with any BMW you can throw a long list of options at the car, including a $1,100 head-up display, $875 Harman Kardon audio system, $250 ambient lighting, and $500 wireless phone charging plus WiFi hotspot. That’s before you get into M Sport options like upgraded brakes and Adaptive M Suspension. 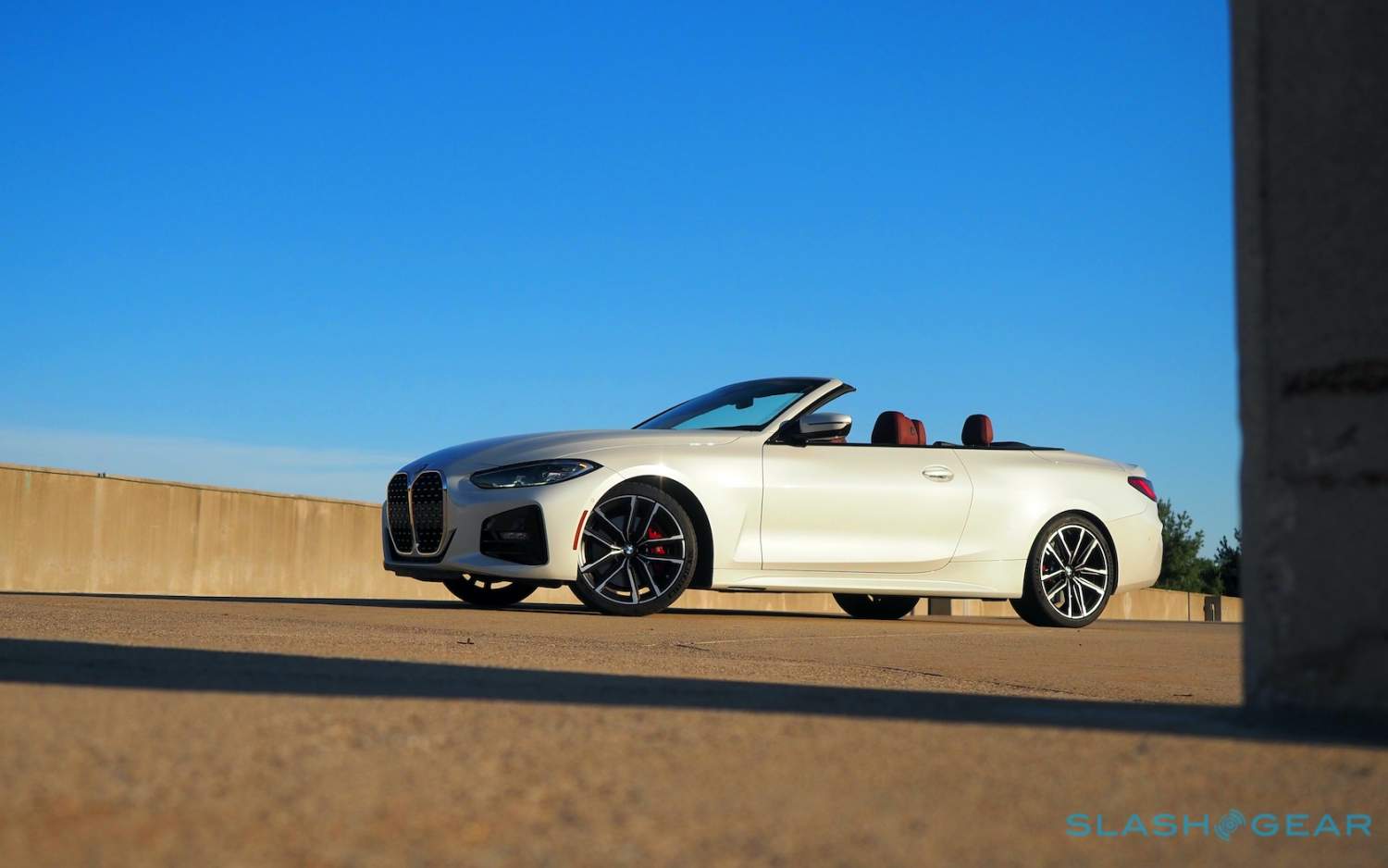 My inclination, though, would be to leave the options sheet alone as best I could: it doesn’t take much extra to leave the 430i Convertible an eminently pleasing place to spend time, roof up or down. Pleasing to drive and refined inside, it shows few of the compromises that many drop-tops have demanded.

That brings us back, of course, to the styling. Maybe you like the BMW nose, or maybe you hate it; I found my gut-reaction to it softened the longer I spent with the car, but for some it’s probably a hurdle too great to overcome. There’s no easy answer to that, beyond only ever approaching the 430i Convertible from behind, or being a little more judicious as you pick a paint finish. Only time will tell if this is a modern classic or a period best forgotten.