Maybe it’s early-onset dementia, or the fact that this 2021 BMW M4 Coupe is finished in handsome Portimao Blue Metallic and not the bilious green launch color, or perhaps Bavaria’s designers were right all along, but I find myself not hating the M4’s most controversial styling feature. Much has been said about the expansive snout on BMW’s enthusiast coupe, and vanishingly small amounts of it proved positive, but I find myself bucking the trend.

It’s not that the new M4 – the two-door performance version of the BMW 3 Series – is classically good looking. Style is subjective, yes, but that’s not to say the consensus doesn’t follow some broad trends. All the same, continued exposure and comely paintwork have me feeling oddly warm’n’fuzzy feelings towards the coupe’s copious grille. 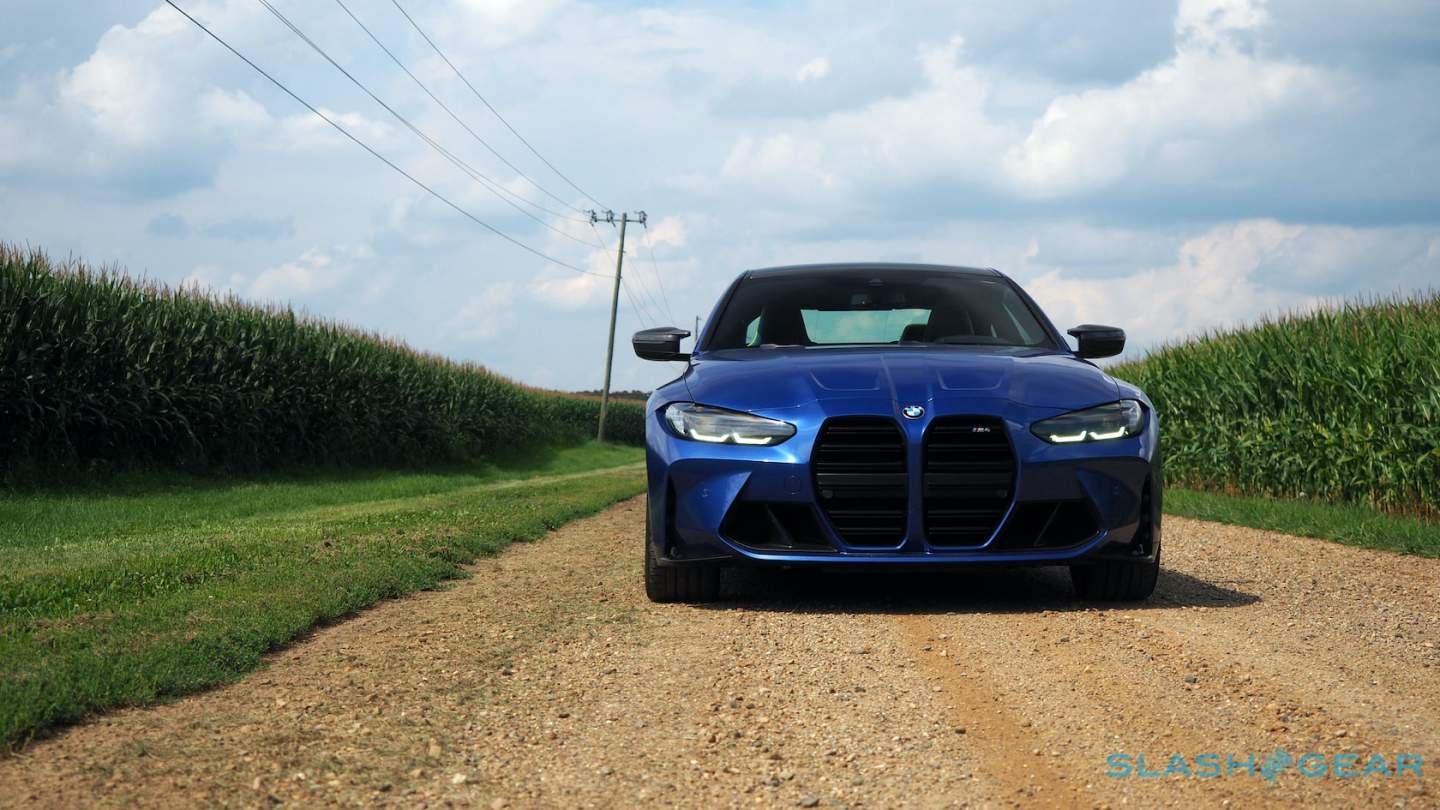 You probably won’t agree, and I’m okay with that. What we can likely find common ground on is a sense of thankful surprise that BMW continues to offer the M4 with a six-speed manual transmission, as well as its 8-speed automatic. Sports cars with three pedals are a dying breed and, even though you can’t get the more potent M4 Competition with the stick shift, I’m thankful nonetheless that BMW hasn’t given up on the configuration altogether.

Anyway, it’s not like the regular 2021 M4 Coupe’s 3.0-liter turbocharged inline-six is lacking in power. 473 horsepower and 406 lb-ft of torque go straight to the rear wheels; the M4 Competition nudges that up to 503 hp and 479 lb-ft, and an xDrive all-wheel drive version, but honestly I’m not sure any of that is necessary. 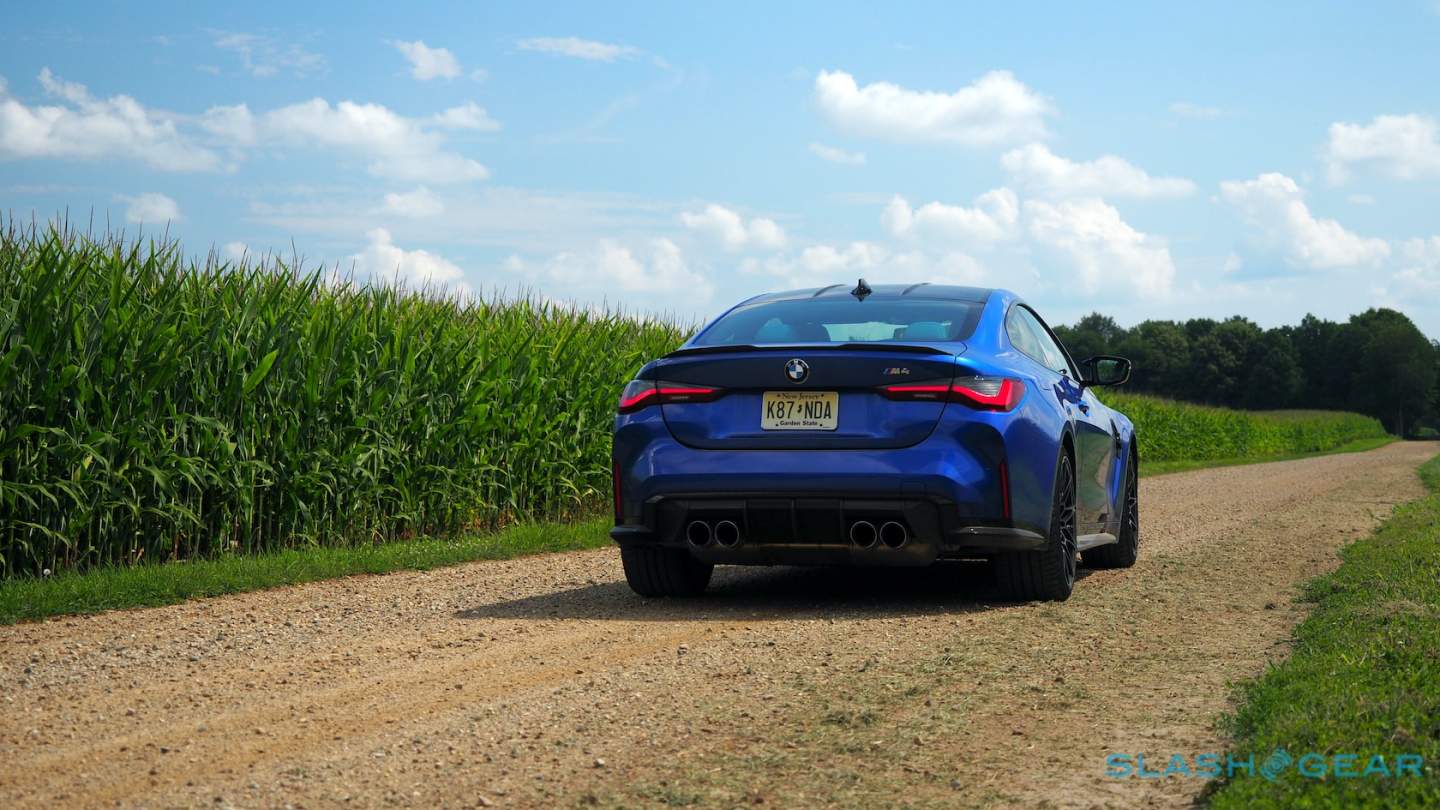 While I’ve no doubt that BMW’s automatic makes for the fastest 0-60 time – 4.1 seconds, the automaker claims – not to mention suitably slushy driving around town when you don’t want a German monster, the opportunity for a manual is too good to give up. Well, once I turned off BMW’s active rev matching, anyway. It gives a hefty hoof-full of throttle as you downshift, which is probably useful on the track but makes you seem like a try-hard to every other driver around you the rest of the time. 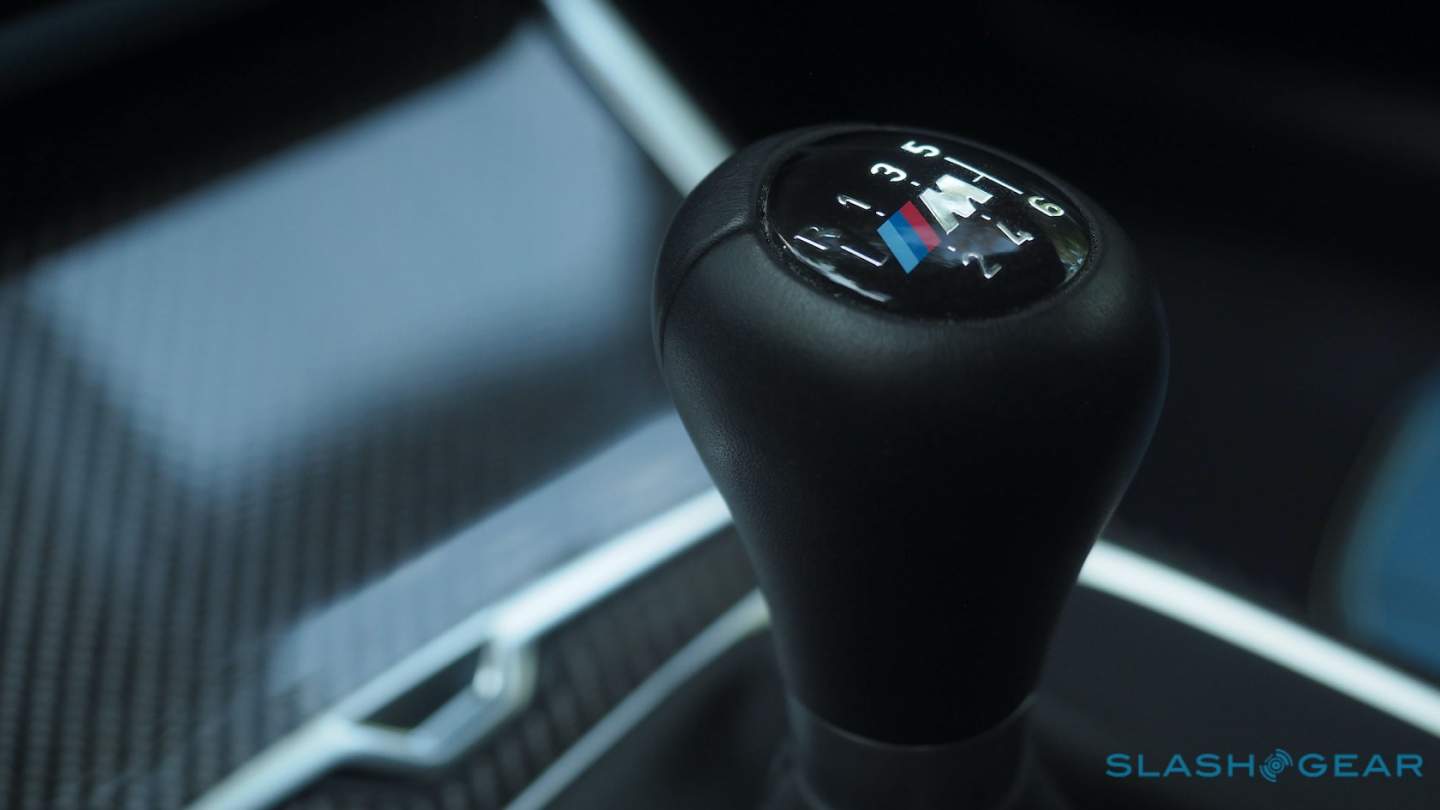 Happily switching it off is one of BMW’s long, long list of options and settings in the M4. We’re a far way from the days when a normal mode and a sport mode were your big driving decision, and the pages of settings, various buttons, and general tweaking potential here is vast and frankly overwhelming. The $900 M Drive Professional option adds adjustable traction control modes, with a further ten settings along with drift analysis.

Thankfully there are two little red preset buttons on the steering wheel, each of which can summon your carefully-configured array of drivetrain and other settings. That meaty-rimmed wheel leaves a good first impression, and the 6-speed takes that baton and runs with it. 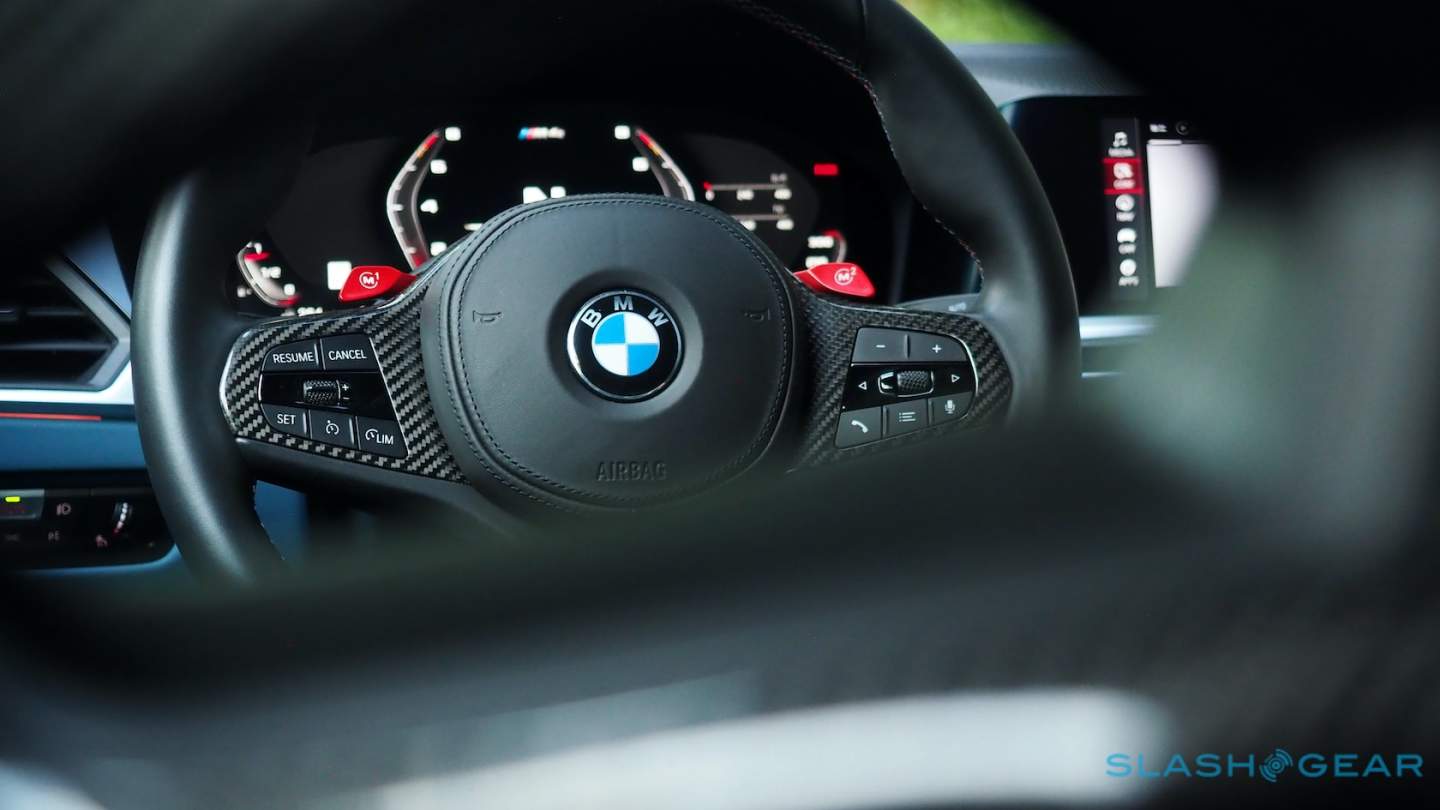 It’s not a light, playful transmission as you’d find in a Miata, instead responding well to a firm hand as you slap it between positions. Strong-arming through the cogs as the turbo howls up to the redline never gets old. Sure, the automatic is faster than any human hand, but maybe we’re losing track of why we love cars like these in the first place. Backroad romps, not bragging rights.

Even in the default settings, things are firm and agile. There’s a little roll in more urgent corners, but it’s only really noticeable when you tap into Sport mode and realize it has disappeared completely. The standard wheels – 18-inch up front and 19-inch at the back – are probably just fine and dandy, but the $1,300 M Double-Spoke bi-color wheels, an inch larger on both axles, look sublime. Grip is never in question, and if the rear end gets playful then it’s almost certainly because you’ve provoked it yourself. 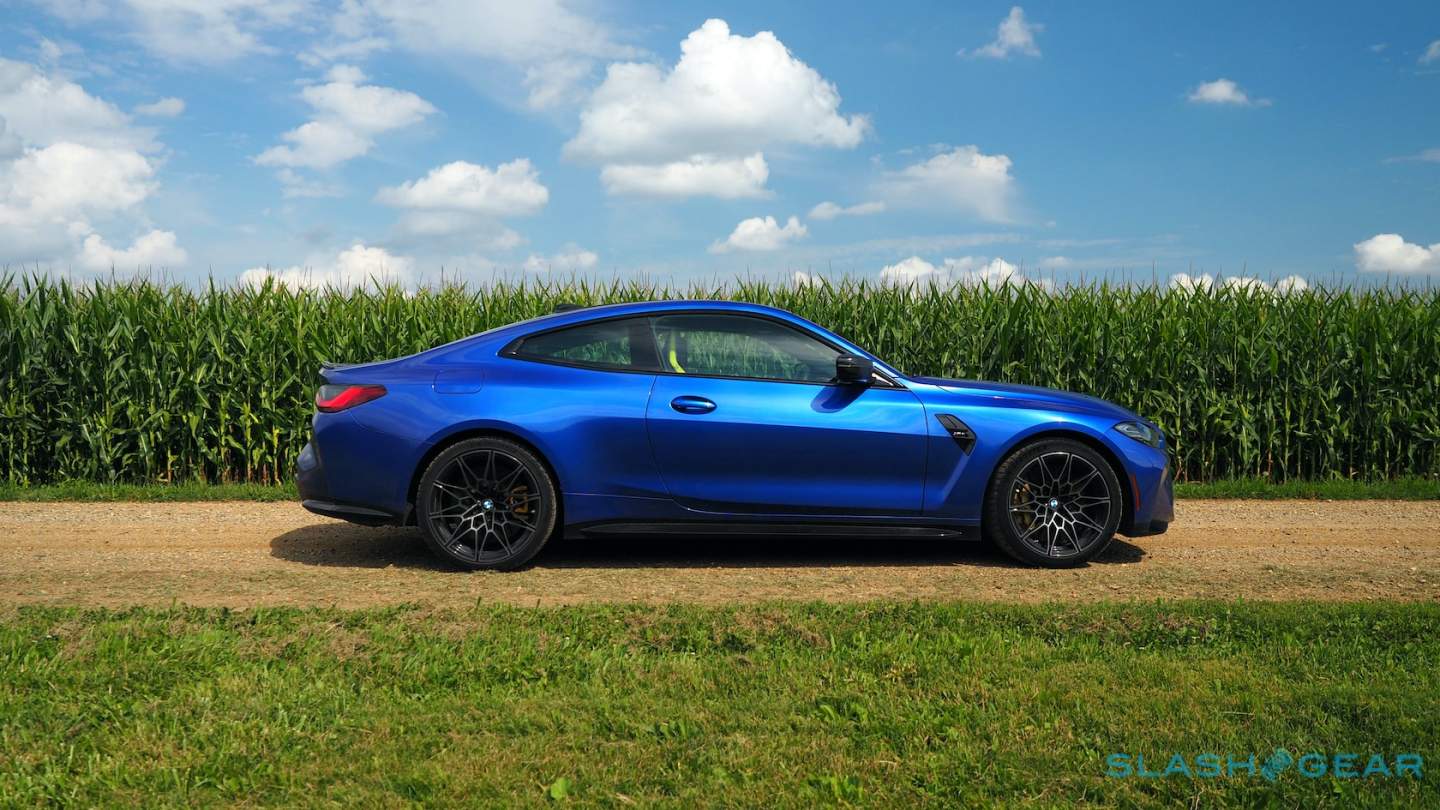 The $8,150 carbon ceramic brakes aren’t cheap, but they’re entirely dependable. BMW manages to avoid the grabbiness that some rivals suffer in return for their extra stopping force, too. Pull back from the more aggressive drive mode settings and, while the M4 is never going to be mistaken for a cosseting 330i, nor will it shake your teeth loose on every scrap of less-than-perfect asphalt. 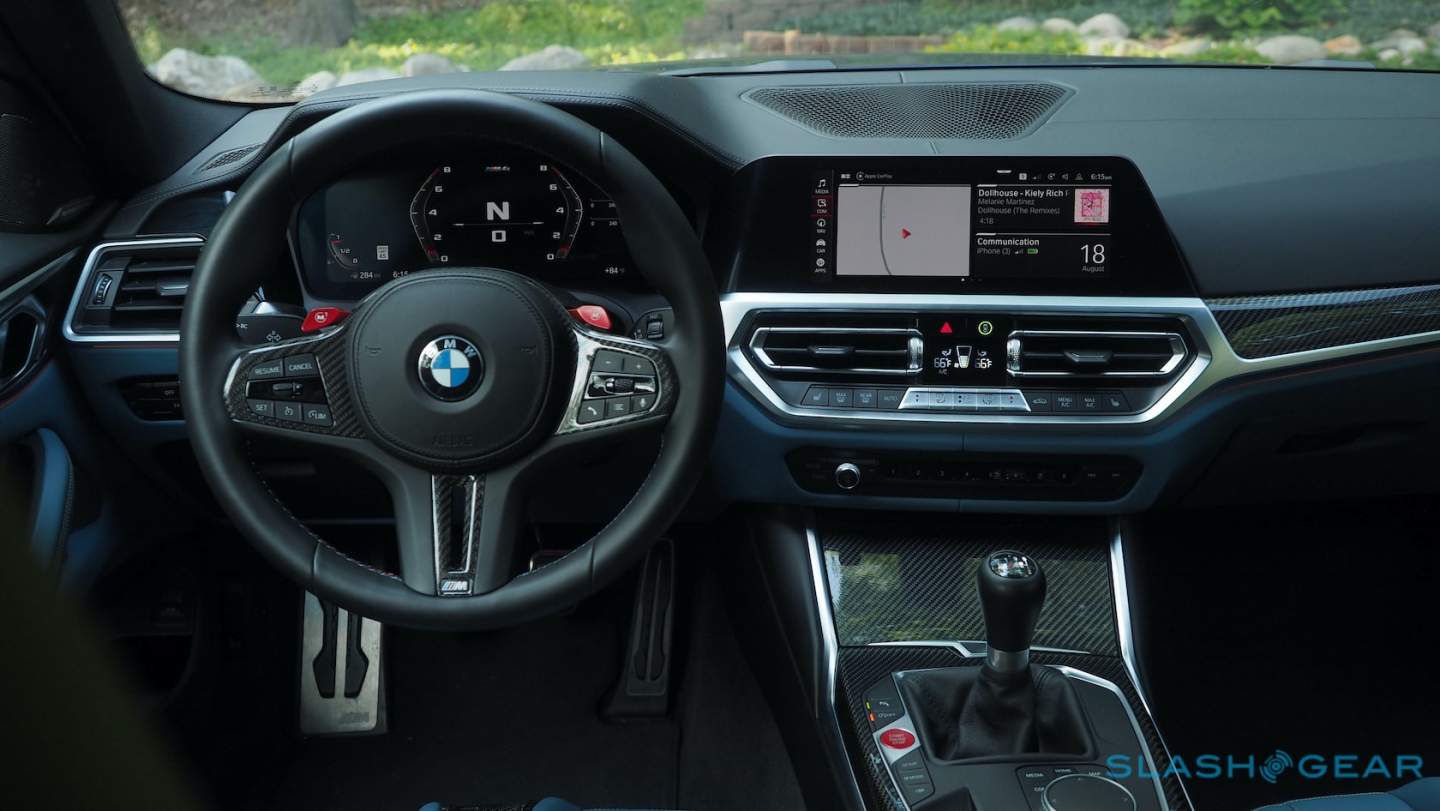 Inside, the cabin is familiar but outfitted with a host of performance trim. The $950 Carbon Fiber package lavishes it on the center console, dashboard, doors, and elsewhere, to match the striking roof. Spend $3,800 on the M Carbon Bucket Seats, meanwhile, and you get a set of impressive sports thrones. Their light blue and eye-searing yellow leather is an acquired taste, as is the hump at the front between your thighs. BMW tells me it lends support in more urgent track conditions, but it still feels weird to me. 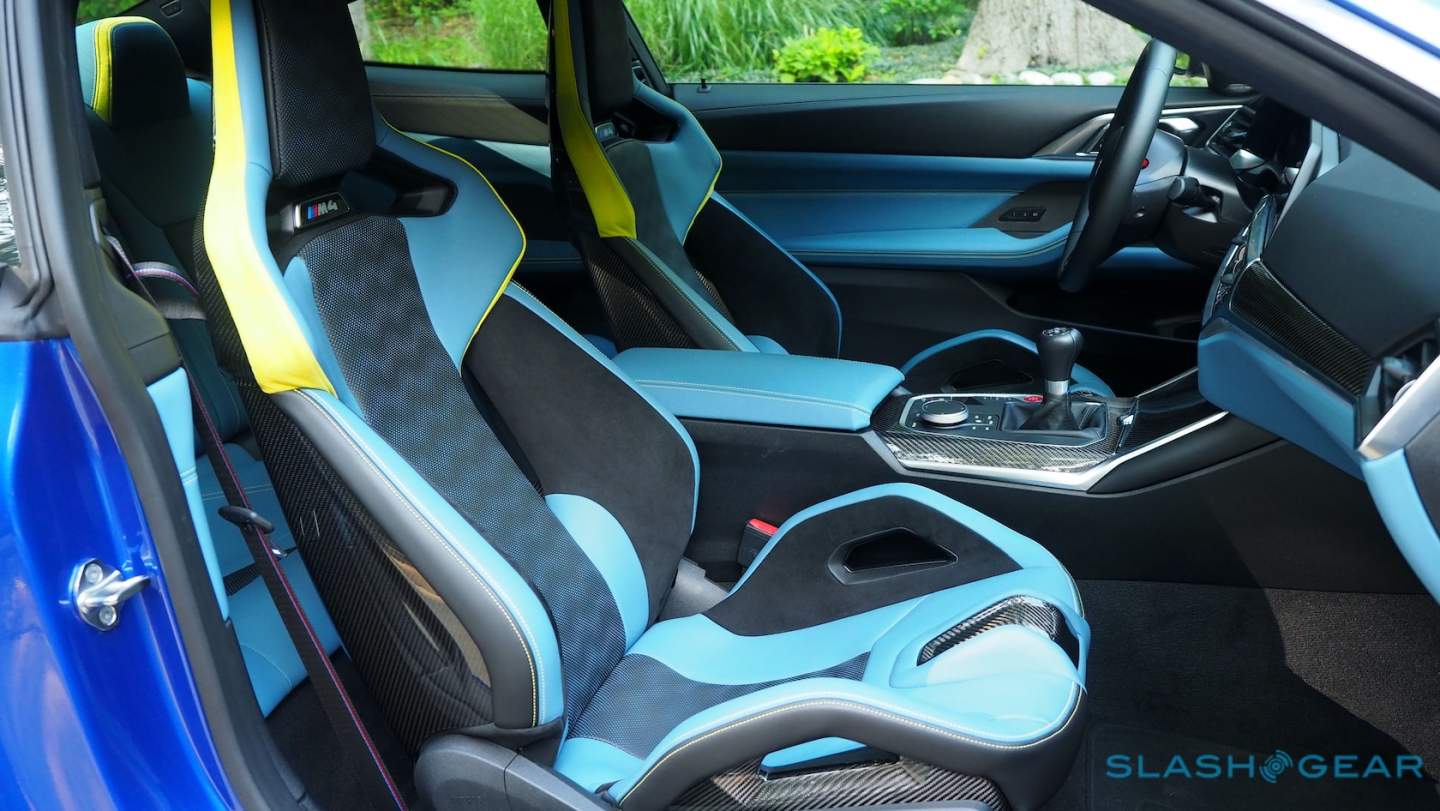 BMW’s iDrive system supports wireless Apple CarPlay and Android Auto, gets a set of USB-A and USB-C ports, a sizable 12.3-inch touchscreen, and a fully digital driver instrument display that shifts layout according to your drive mode. A Harman Kardon audio system is standard, too. This is all familiar fare if you’ve been in a recent BMW. 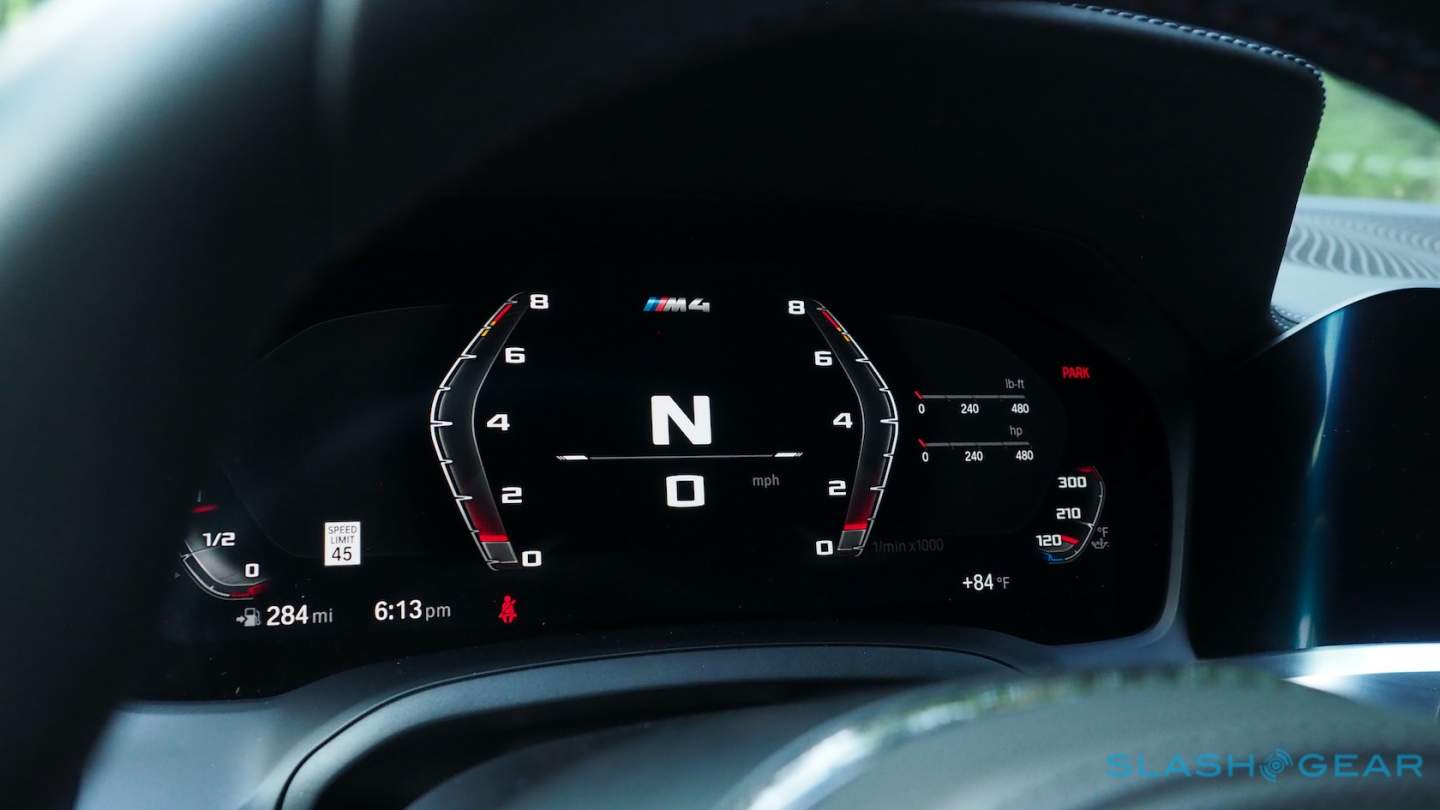 In the back, there’s actually a reasonable degree of room for adults. I’m 5’8 and could fit there without needing to clamshell my legs or chop off any limbs completely. Adding to the sense that BMW expects the rear seats to be used occasionally are dedicated USB ports and other controls. 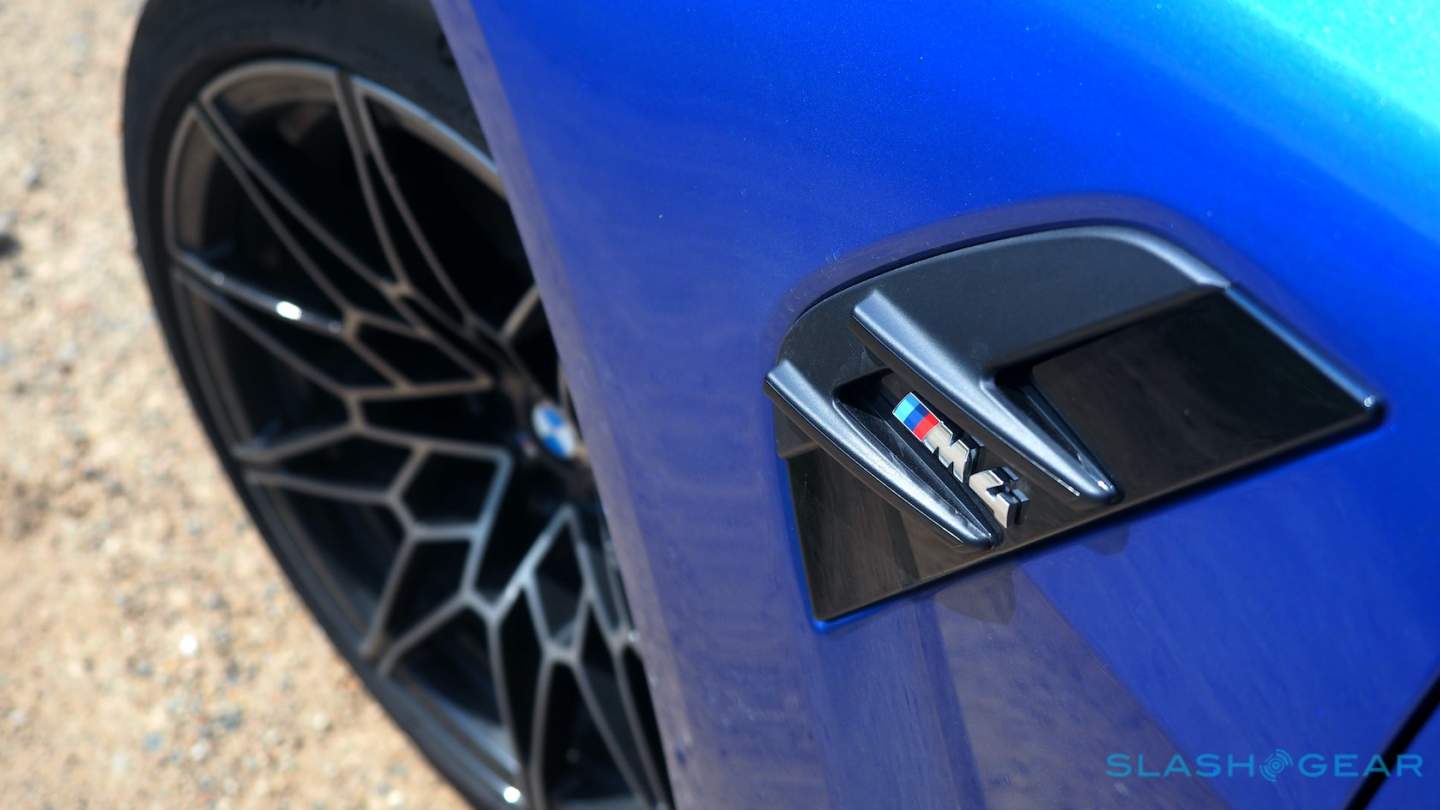 As for safety, there’s blind spot warnings, forward collision warnings with automatic emergency braking, lane departure warnings, and front and rear parking sensors, all as standard. The only option is the $300 M Shadowline Lights package, and even then that’s more an aesthetic change than a functional one. 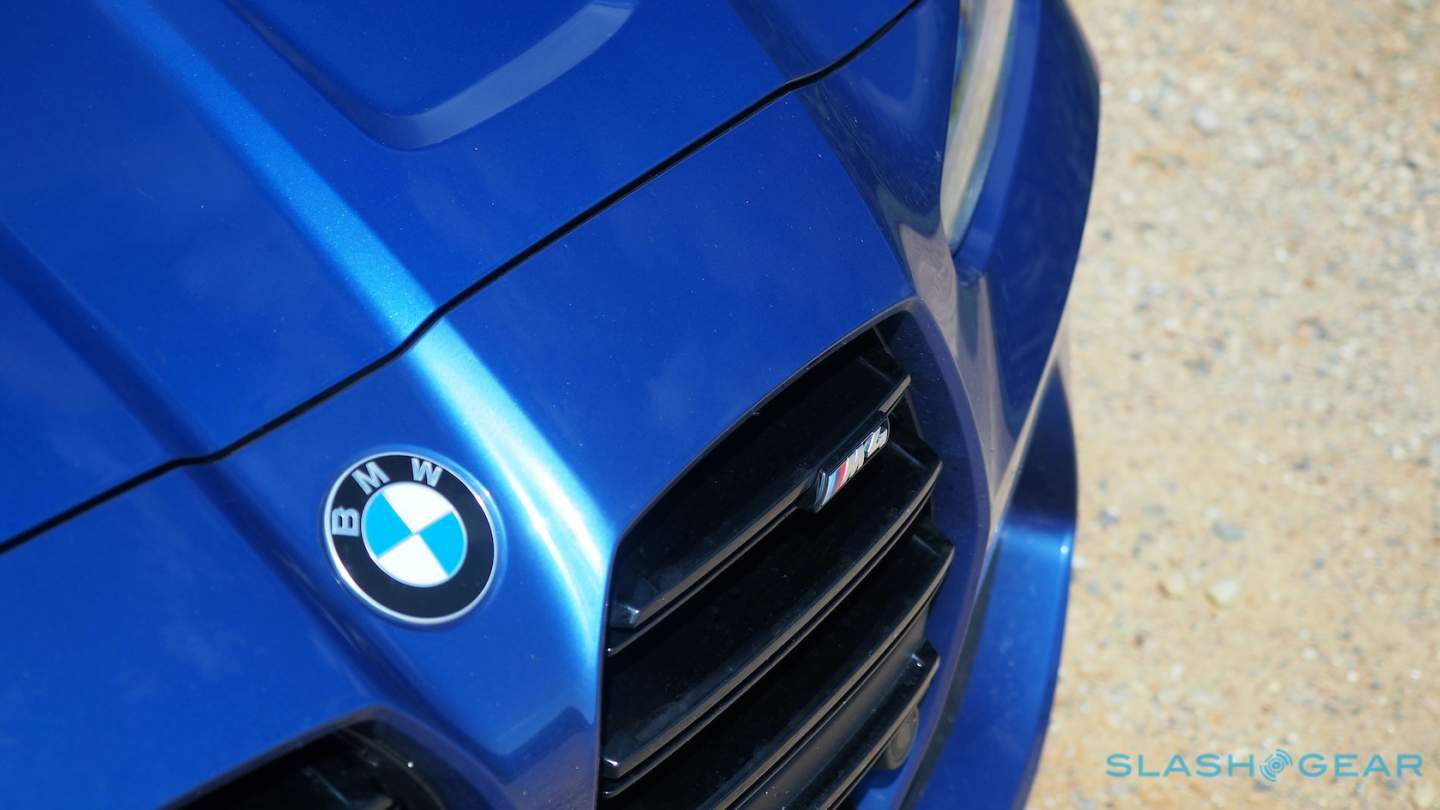 The cash you save there, you’ll spend on gas instead. The EPA says you’ll get 16 mpg in the city and 23 mpg on the highway, which might be possible if you ignore every reason you bought the M4 coupe in the first place.

With its sticker price of $71,800 (plus $995 destination), the M4 Coupe lulls you and your wallet at first. BMW’s options, of course, bring the real heat: all-in, this review car ended up just shy of $94k. That’s $15k more than the more powerful M4 Competition xDrive Coupe, which starts at $78,800 (plus destination). 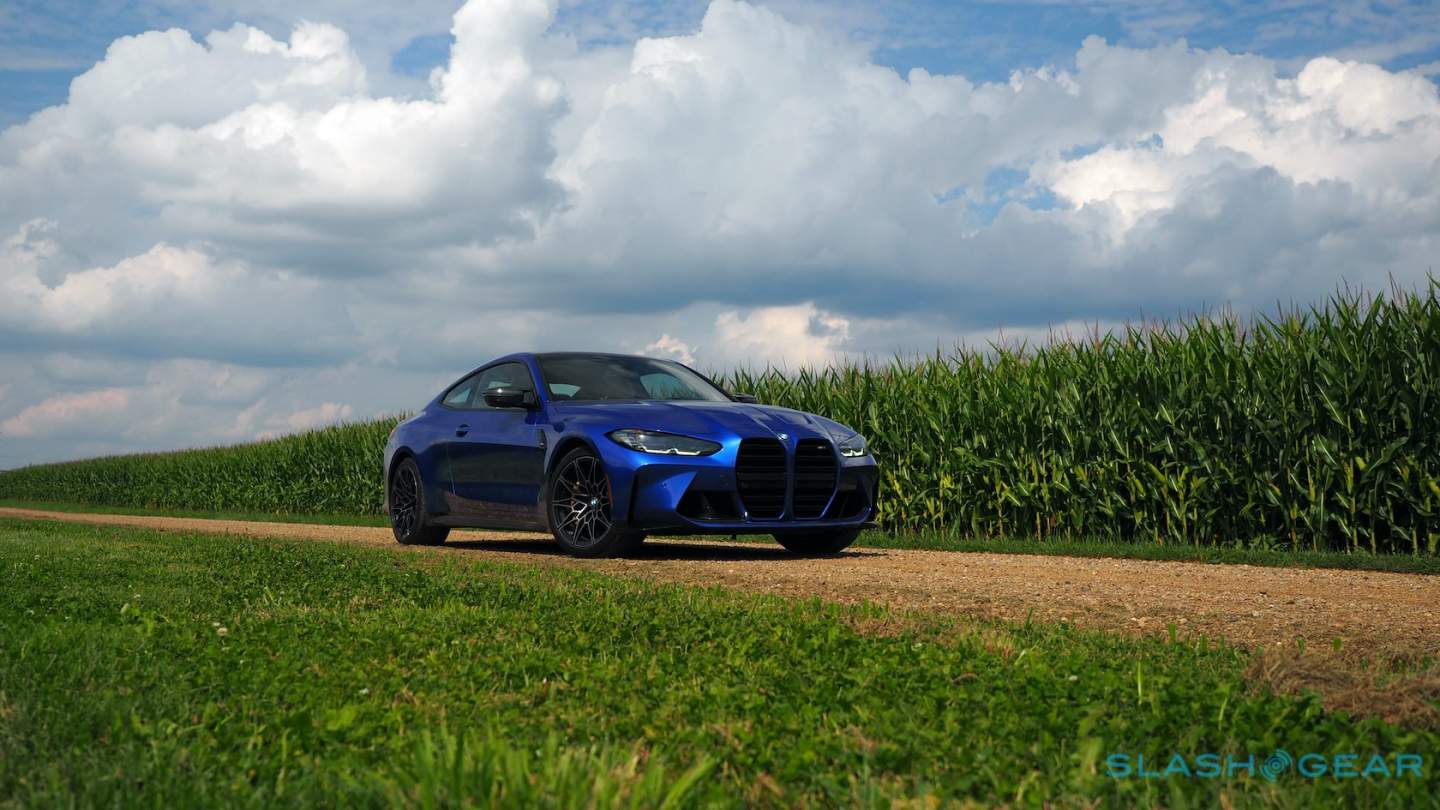 I’d like to say you could skip most of the add-ons and still have the same overall experience, but a lot of them contribute so specifically to the M4 Coupe that I’m not sure the savings are worth the sacrifice. Maybe, in the grand scheme of things, spending lavishly on one of the few remaining manual transmission, true sports coupes is justifiable. After all, you probably won’t be thinking about the price tag when you’re slamming through the gears and listening to the inline-six sing its magical song.