Audi seems determined not to startle the brand-faithful with its EVs. Just as the original e-tron SUV surreptitiously injected electrification into what otherwise felt like any other recent SUV with a four-ring grille, so too the new 2021 Audi e-tron Sportback makes familiarity as important as zero-emissions. Rather than outlandish exterior sheet metal or stark departures in cabin design, this newest e-tron presents all-electric drive as about as close to mainstream as we’ve seen.

It’s a cunning strategy. VW Group has big plans for electric vehicles, and it can’t count on selling all of them to bleeding-edge early-adopters and green zealots. If full EVs are to account for 20 of Audi’s vehicles by 2025, it needs to coax drivers away from internal combustion. 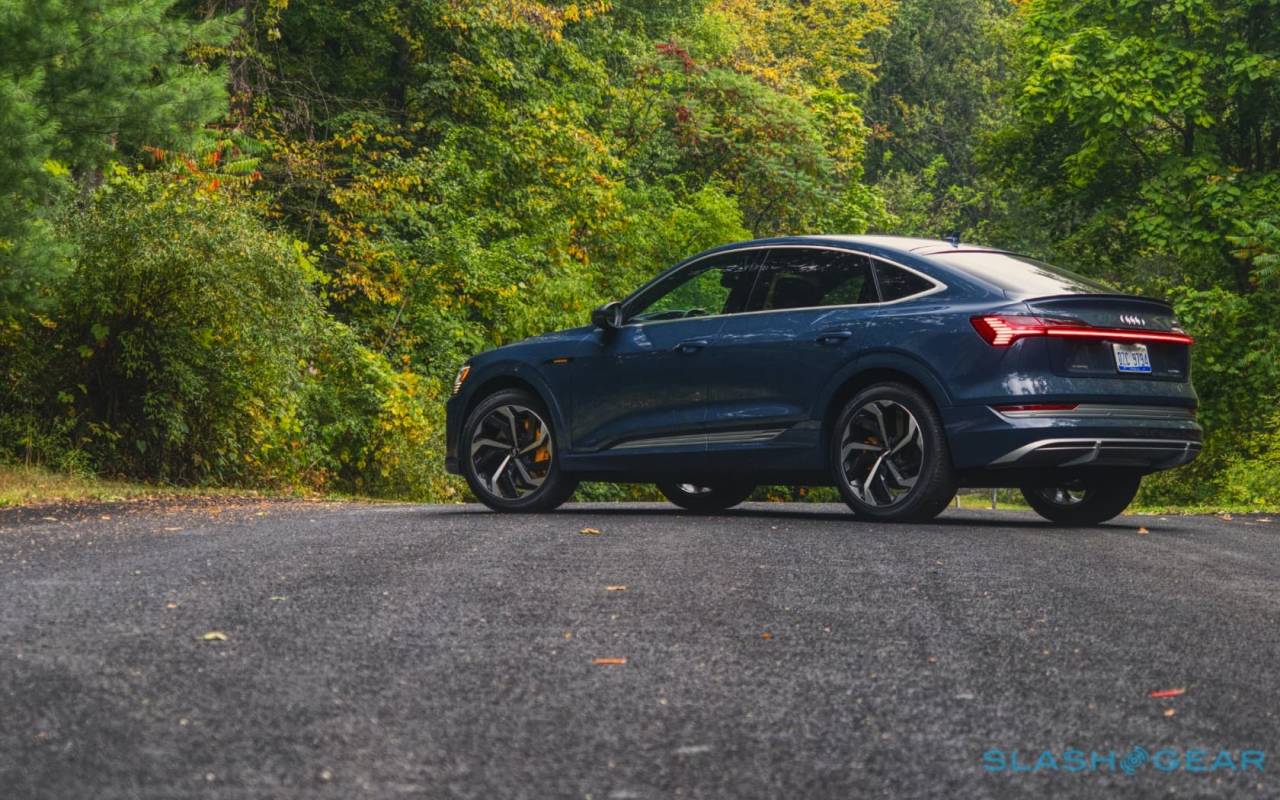 Pricing kicks off at $69,100 (plus $1,045 destination, but before any incentives) for the 2021 e-tron Sportback Premium; the Premium Plus is $78,000 and the Prestige is $82,300. Even the entry-level car gets four-zone climate control, a power sunroof, Quattro all-wheel drive, navigation, a Bang & Olufsen 3D audio system, and leather seats with heating and ventilation for the front.

Things look familiar from the e-tron SUV, up until you get to the sloping roofline. Audi’s Sportback models like the A5 and A7 ended up adding sales rather than stealing them from A4 and A6, the company says, and the expectation is that the 2021 e-tron Sportback will do the same in EVs. The not-really-a-coupe-but-almost aesthetic is handsome and clean, with restrained electric cues – like the closed-off grille – there for those in the know to spot. 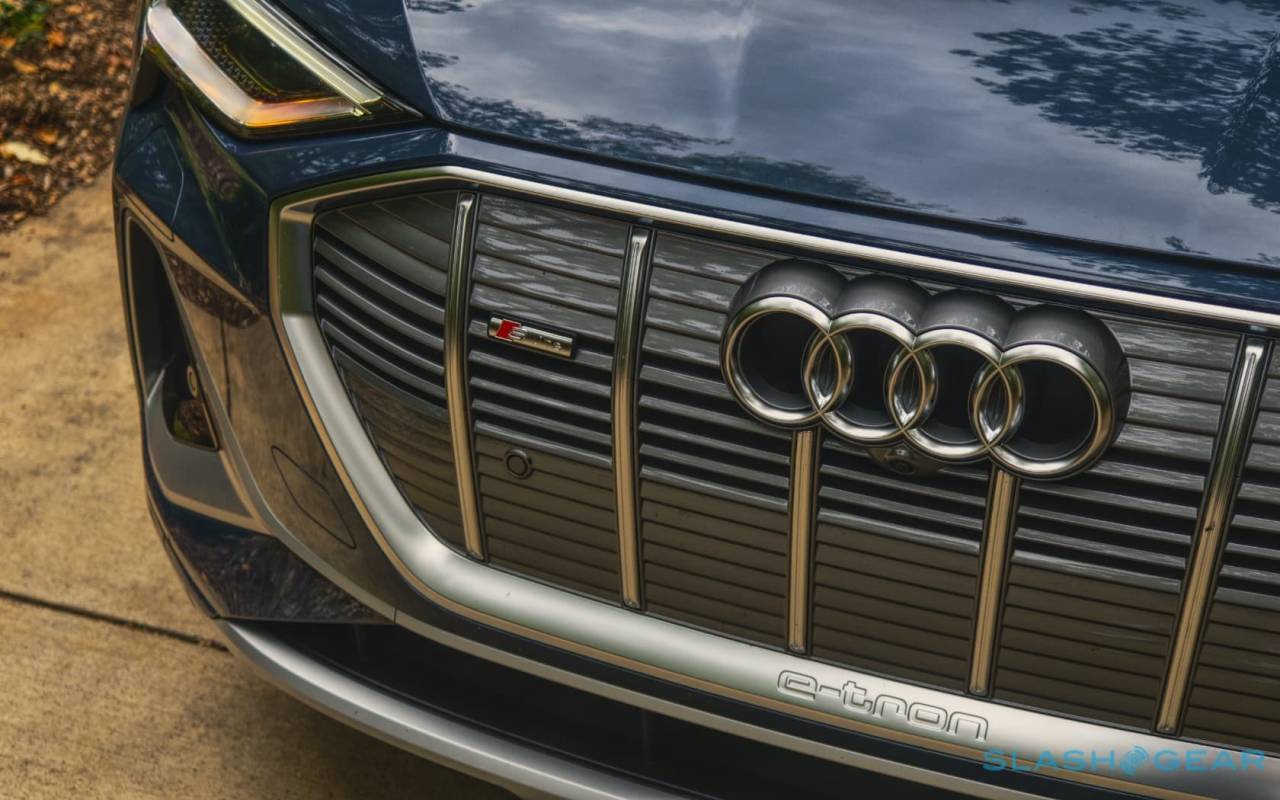 In the rear you get 27.2 cu-ft of space, surprisingly only 1.3 cu-ft less than the e-tron SUV offers. There’s a front storage compartment under the hood, but it’s small: Audi’s charging cable takes up most of it. Even rear headroom isn’t really all that impacted, with average height adults back there giving no complaints.

Under the sleek new sheetmetal is the same e-tron architecture that we’ve enjoyed before. Audi uses two electric motors, one for each axle, with the rear being slightly larger and more powerful. In normal use you get 355 horsepower and 414 lb-ft, though those figures can briefly be boosted to 402 hp and 490 lb-ft when you bury the accelerator in the S transmission mode. 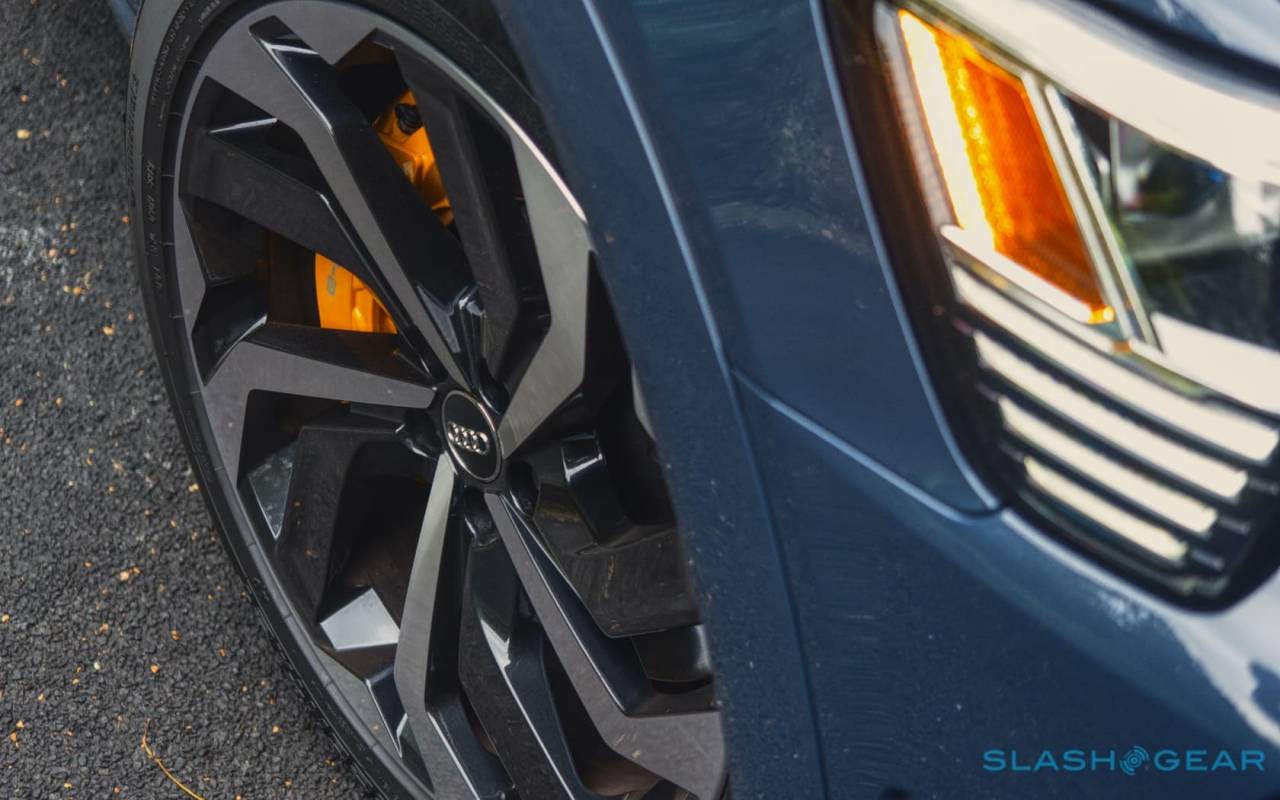 0-60 mph comes in 5.5 seconds, top speed is 124 mph, and the EPA estimate is 218 miles on a full charge of the 95 kWh battery. With a DC fast charger and the e-tron Sportback’s 150 kW charging support, a 0-80% charge takes about half an hour. And, though it might look more sporting, you’ll still be able to tow up to 4,000 pounds with the available package.

On the road, there’s a slight compromise in ride made for style: the standard e-tron Sportback gets 20-inch wheels, rather than the e-tron SUV’s 19-inch, while the $4,100 Edition One package upgrades that to 21-inches. Adaptive air suspension is standard, though, which goes a long way; in Comfort mode, the EV is as plush as an A8. 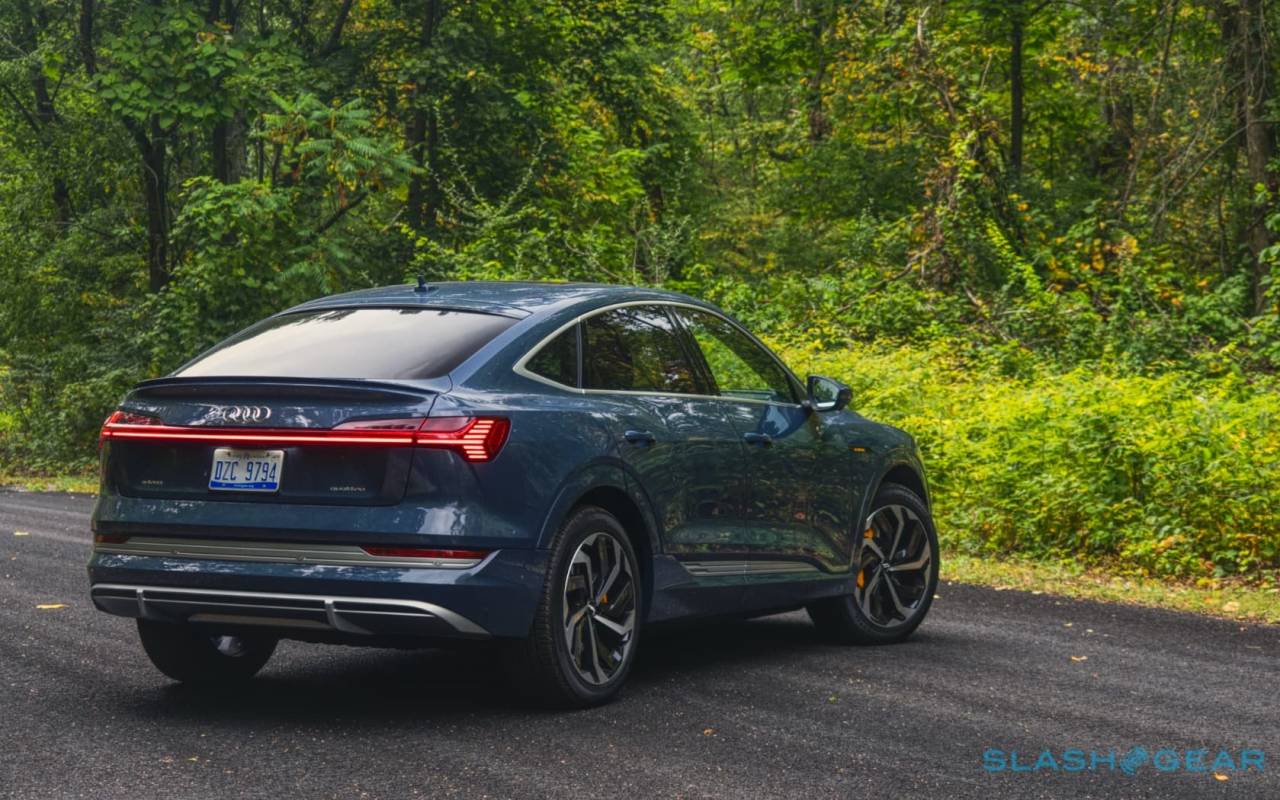 Switch to Dynamic, meanwhile, and the e-tron Sportback does its best to hide the 5,754 lb curb weight. Though the acceleration isn’t at “Ludicrous” levels, the fact that all that torque arrives from the get-go makes for a deeply entertaining point-and-shoot driving experience. You surge away from lights and stops signs, dart through gaps in traffic, all the time serenaded with the e-tron’s spaceship-like electronic whirring. Audi says it hasn’t decided yet whether to launch the Sportback S in the US, so consider me preemptively jealous that Europe gets to enjoy peaks of 496 hp and 718 lb-ft.

The steering wheel still has paddles, but since there are no gears to flip through they control regenerative braking instead. There are three levels available, from basically non-existent through to moderately aggressive, and Audi says that the e-tron Sportback can recuperate around 30-percent of its total range at the maximum setting. I’d not argue with a fourth, even more intensive setting, frankly; unlike other EVs, you can’t do one-pedal driving even with the regen cranked up to the max. 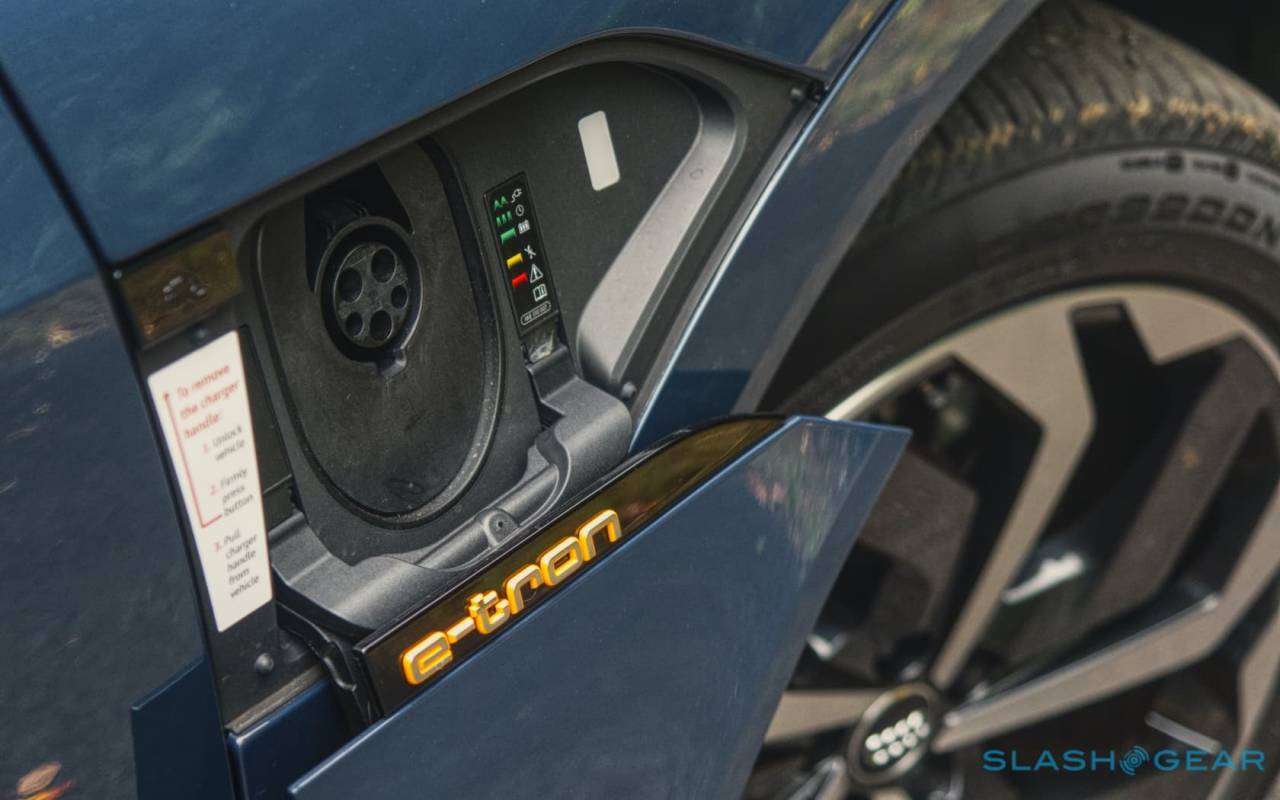 Now, I didn’t set out to scientifically test Audi’s range promises. The e-tron Sportback’s dashboard estimate is based on your recent driving behavior, and I’m generally of the opinion that total potential distance isn’t what gives people anxiety, but uncertainty about just how reliable the number of miles quoted is. Having been in some EVs where the range remaining number starts to spin down like an elevator in freefall, with seemingly little connection to how far you’re actually driving, accuracy there is something I’m always conscious of.

With only a long weekend to see how it held up, I’ll hold off from any final conclusions. The e-tron Sportback’s estimate, though, generally came within 1-3 miles of the distance I actually drove on each charge. I suspect it would improve the more the trip computer had time to observe my driving style, itself fairly mixed given I was was trying to cover all the bases in the time I had. In short, then, not Tesla-rivaling numbers but enough predictable miles from a full battery to suit most daily needs. 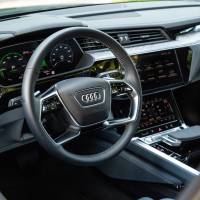 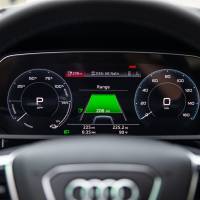 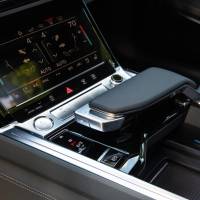 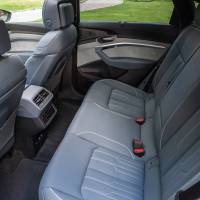 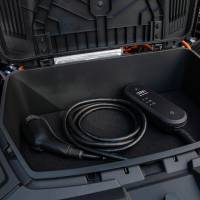 Audi’s cabin design doesn’t stray from the example it set with the original e-tron SUV: enough of the familiar so as not to confuse loyalists, along with a few tech tweaks. The dual touchscreen infotainment system is straightforward to use, though those coming from other EVs and wanting to find the power consumption metrics most offer may come up short. Audi is fairly restrained in what it shows you.

The idea, I suspect, is to stop electrification feeling like such an outlier. Certainly, the automaker has done all it can to make living with an EV as straightforward as possible. Having two charging ports, one on each front fender, as comes standard on the Premium trim may feel needlessly lavish, right up until you find a charger with a short cable reach. 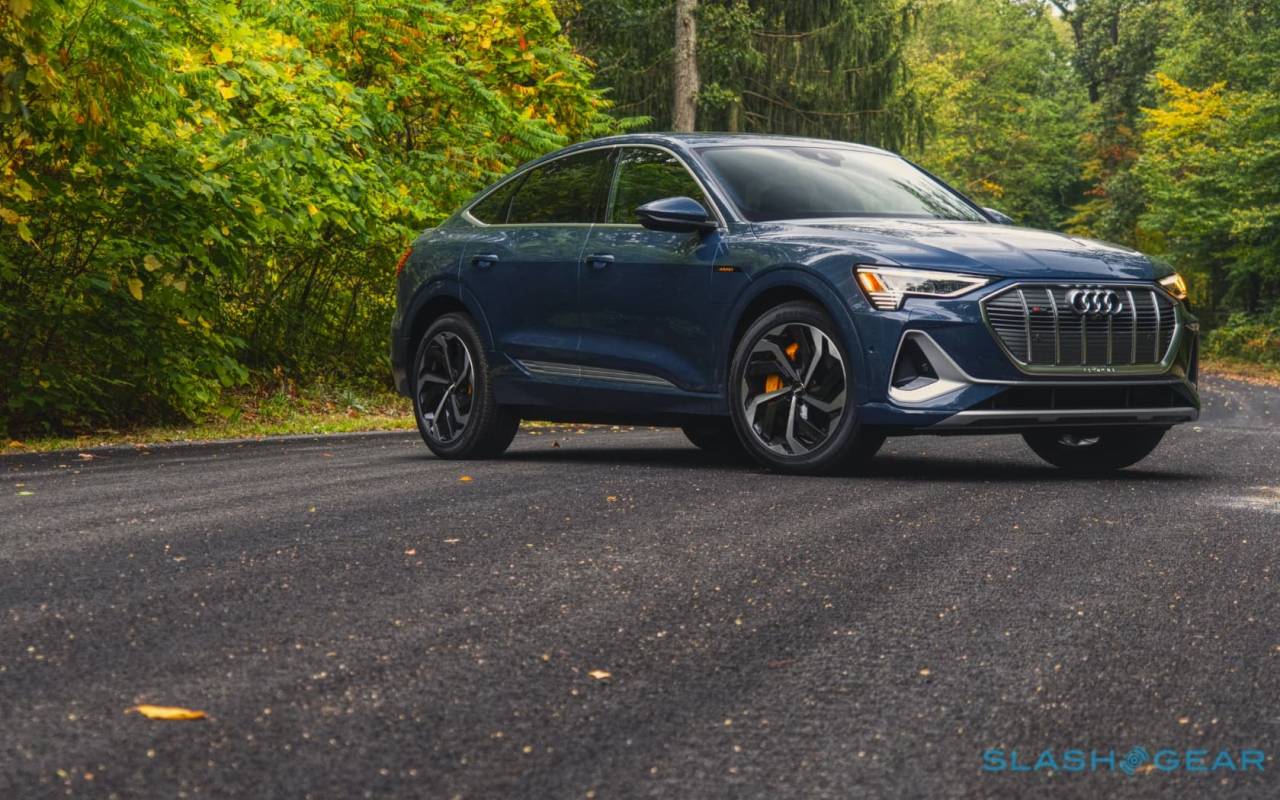 There’s plenty to like about the e-tron Sportback. All the same, though, I can’t help but think that the real excitement in Audi’s EV line-up is still just around the corner. The Audi e-tron GT will bring some drama to the luxury sports sedan segment, yes, but it’s the 2021 Q4 e-tron and its rumored $45k starting price which I’m most intrigued by.

That’s because, while there may be no shortage of high-end all-electric vehicles for those with deep pockets to enjoy, we’re yet to really see luxury and electric cross down into the mainstream. I can totally understand Audi’s strategy at launching the e-tron SUV and e-tron Sportback first, and they certainly offer a taste of what’s to come, but it’s getting more EVs onto more driveways that I think will be the true tipping point.