Throwing development cash at a shrinking segment, with the hope of persuading badge-obsessed drivers to rethink their brand loyalties, sounds like a fool’s errand, but Acura has plotted a surprisingly sensible course with the new 2021 TLX. True, sedans may now comprise less than 38-percent of new premium vehicle sales in the US, but that’s still a sizable group of potential customers. Offer them something stylish, affordable, and rewarding from behind the wheel, and you could have a hit on your hands.

Acura has taken no chances getting the new TLX’s styling pitch-perfect. The sedan gets an exclusive platform, adds 2-inches in length compared to the outgoing car, and extends the wheelbase by 3.7-inches. It’s lower, the track is wider, and most notably the hood is longer with more distance between the front axle and the dashboard. 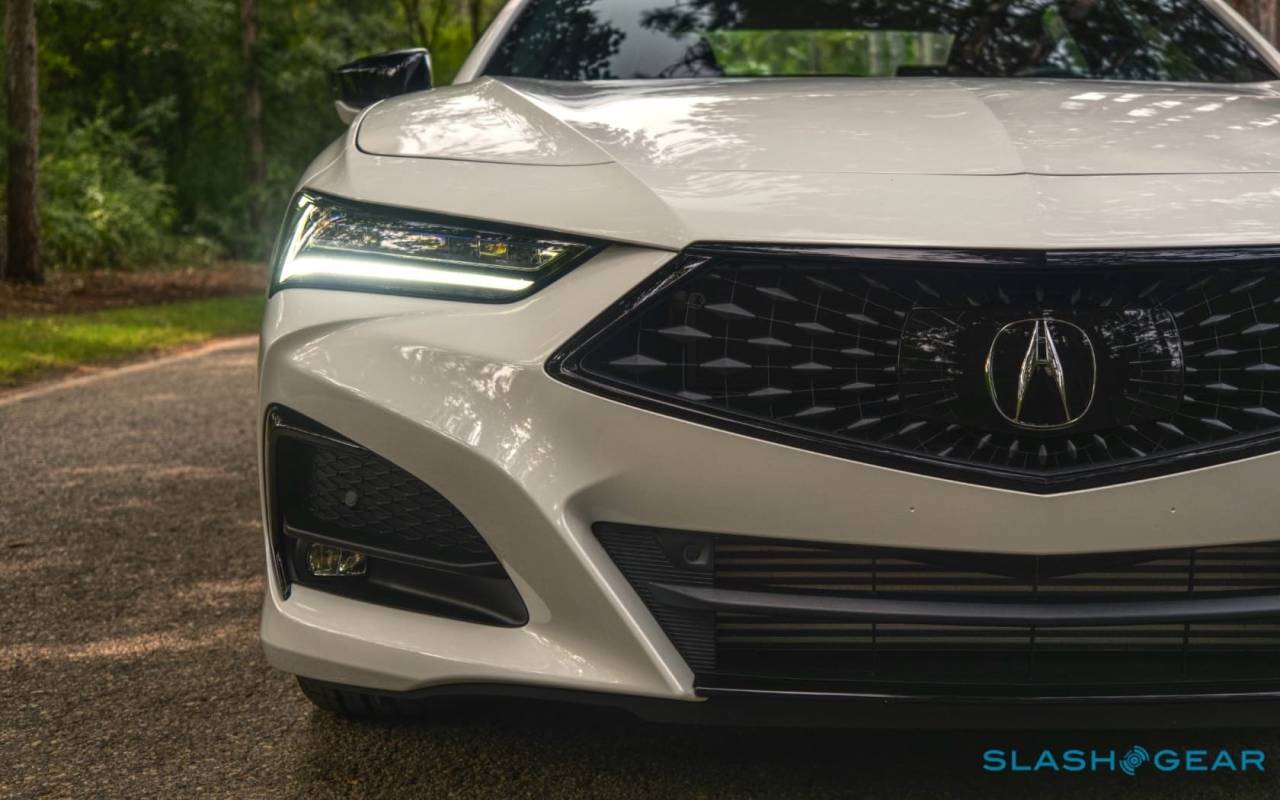 The result is, I’m pretty confident in saying, the most striking vehicle in Acura’s current line-up. And yes, I’m including the NSX in that statement. Viewed from the front, the new TLX looks low, wide, and menacing; as it pulls up behind you, it fills your rearview mirror with sharklike poise. The rear is equally slick, pinched glass above broad hips. Everything emphasizes the long, low, sleek qualities associated with a sports sedan. 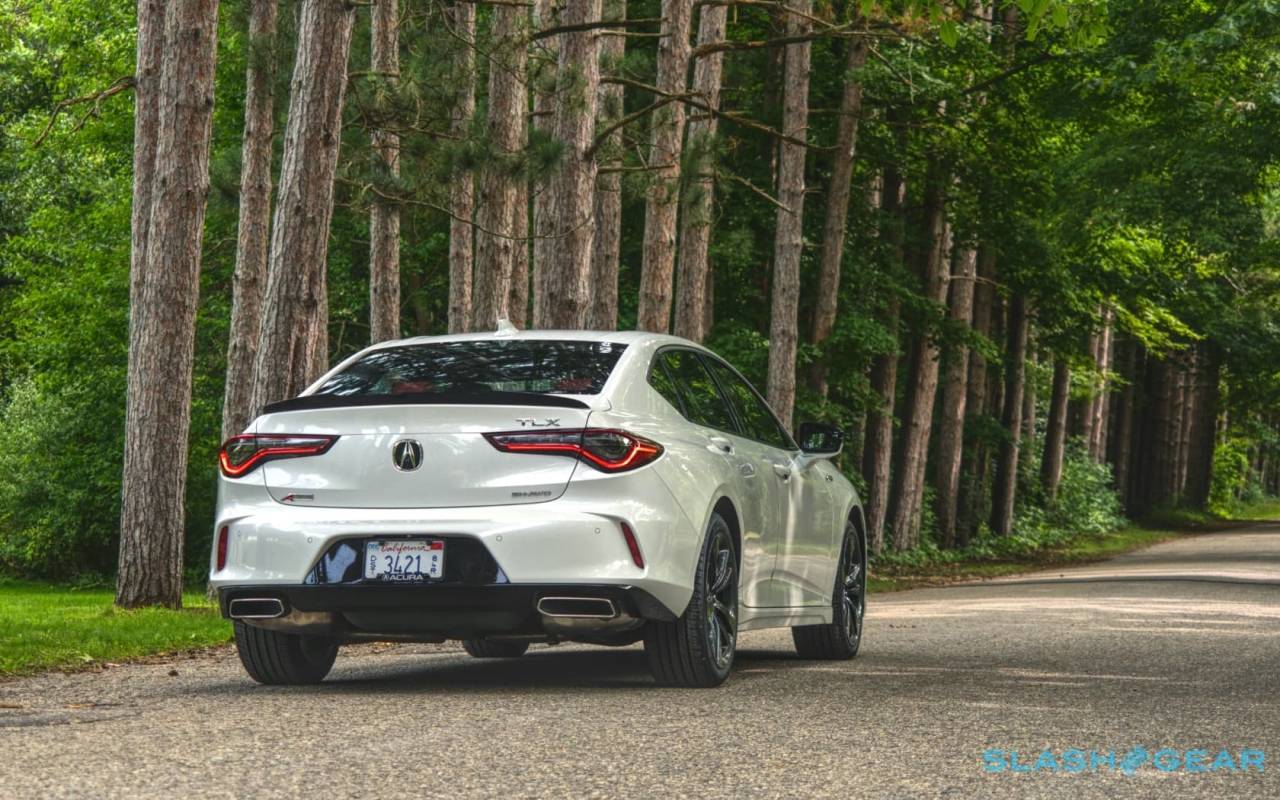 On top of that core silhouette there’s Acura’s detailing, which – until the somewhat exaggerated TLX Type S arrives next Spring – errs just on the right side of restraint. The kinked squiggles of the DRLs, gleaming like the remnants of a midnight light-painting, and their razor-sharp red echos in the tadpole-shaped rear clusters. The A-Spec swaps most of the exterior brightwork for black, most noticeably around the larger, more stylized grille that doesn’t – I’m looking at you, BMW – overpower the front fascia. My one complaint? That glossy panel right in the grille’s center, hiding the front sensors for the adaptive cruise control. Necessary, but not so great to look at. 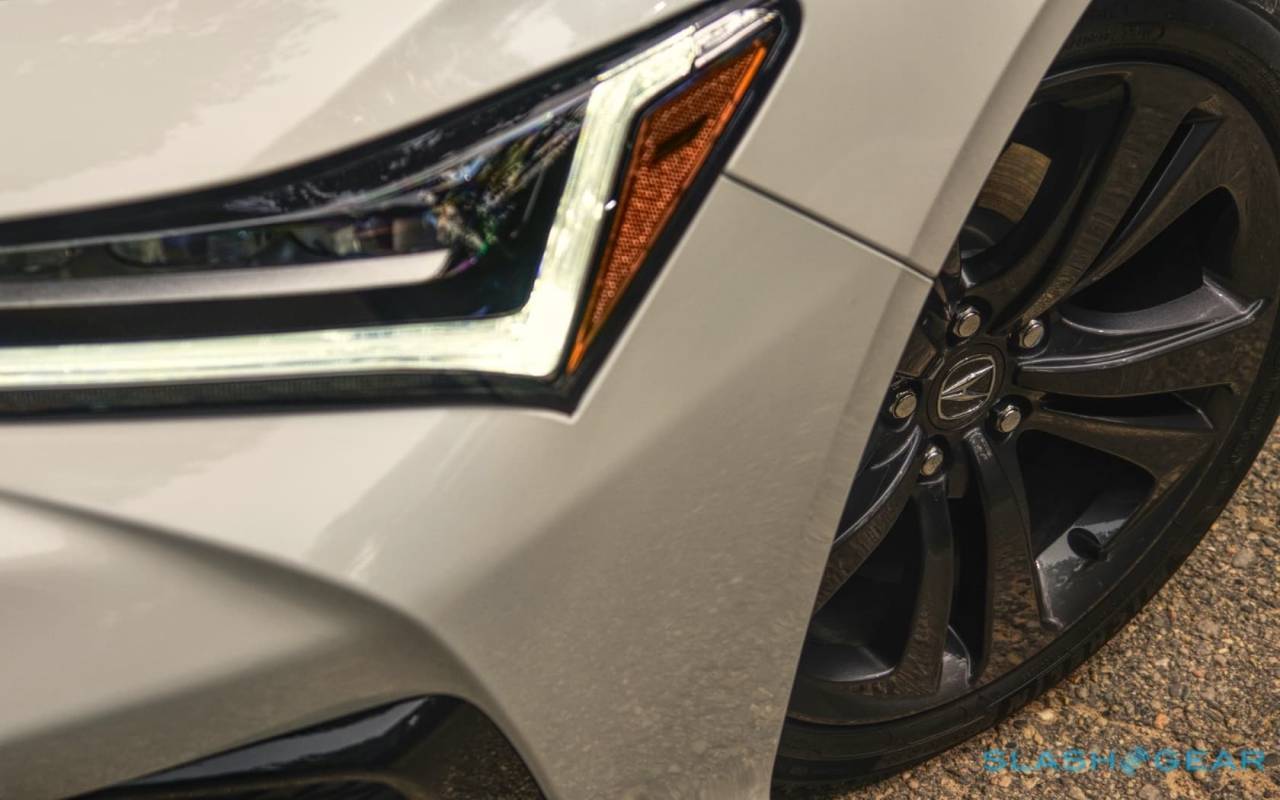 Keeping things simple is the fact that, despite several trims and that sportier-looking A-Spec package, there’s only the one engine for now, and really just one decision to be made about FWD/AWD and one about suspension.

Everything, from the base car through to the top-spec Advance, gets the same 2.0-liter inline-four VTEC Turbo. Indeed, Acura’s argument is that the old car’s entry-level four-cylinder simply hasn’t been replaced: this new 272 horsepower, 280 lb-ft torque engine has potency more akin to the old 3.5-liter V6 that used to be offered as an upgrade. 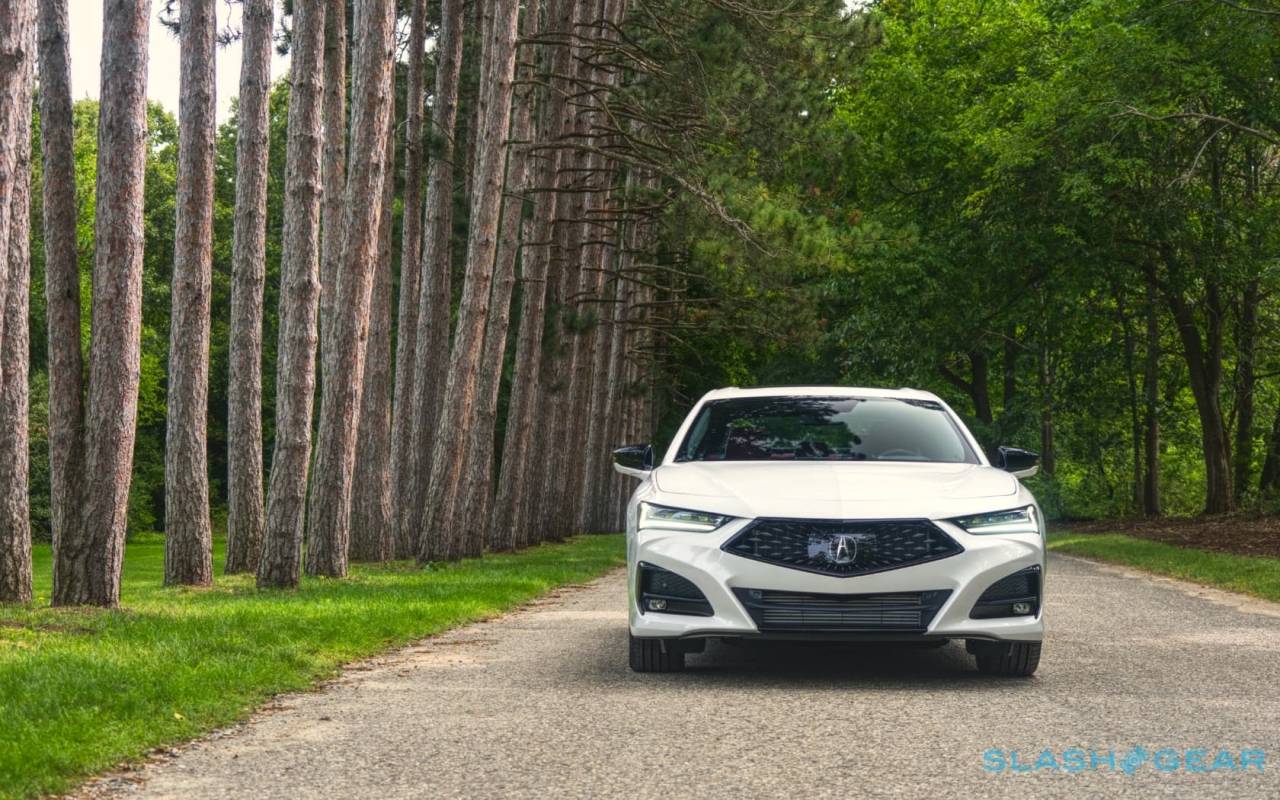 The TLX Advance gets adaptive dampers while the rest have simpler, single-mode amplitude-reactive dampers; all versions have double-wishbone front suspension and multi-link rear . Finally, there’s a 10-speed automatic transmission, variable gear ratio steering, and an electro-servo brake system derived from that of the NSX.

Acura is exceptionally proud of its SH-AWD system, and so I split my time between the all-wheel drive TLX in Advance and A-Spec forms. There’s good reason for the automaker to crow, too. Now in its fourth generation, SH-AWD is capable of pushing up to 70-percent of the power to the rear when required, and then allocating up to 100-percent of that to either the left or right wheels. Everything is managed automatically – and shaped by the drive mode you’re in – depending on traction and performance demands. 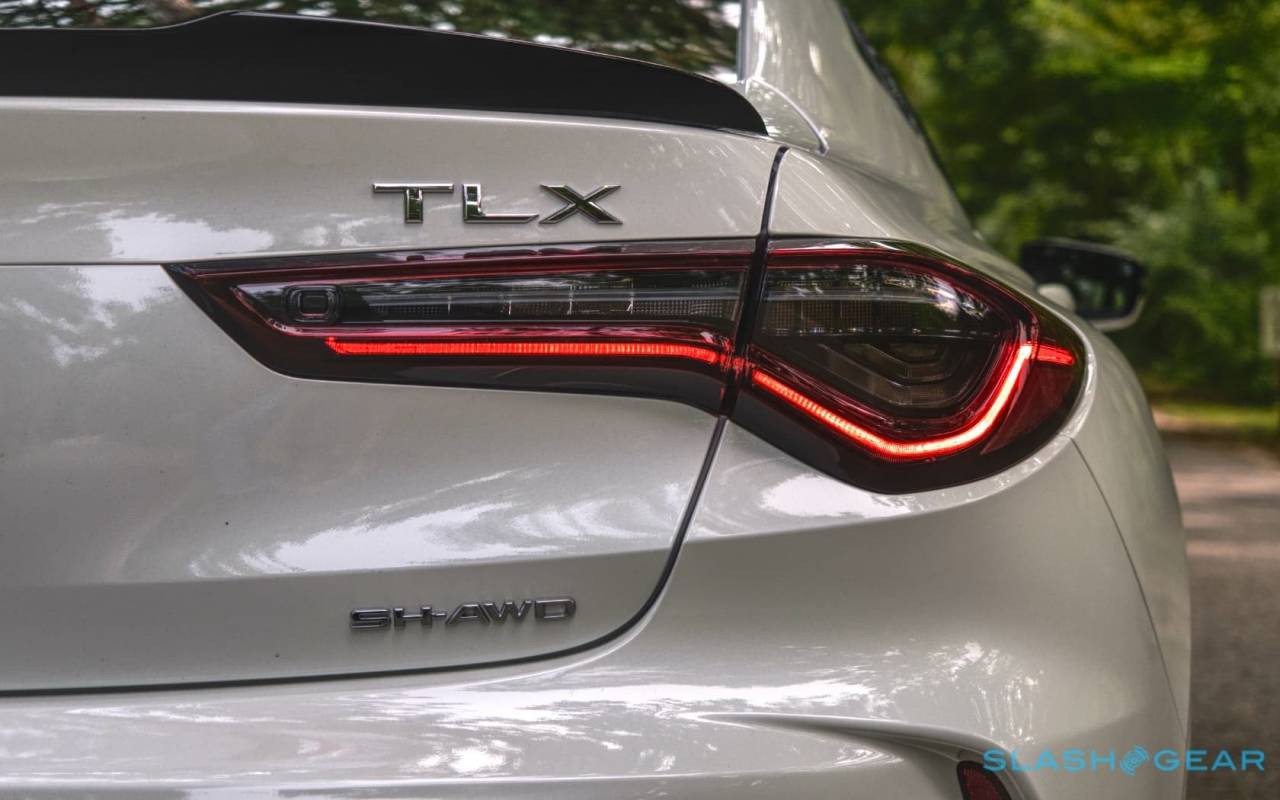 The 2021 TLX’s new engine may be smaller in capacity than its predecessor, but you notice the improvements from the get-go. Peak torque arrives at 1,600 rpm, but more important there’s about 90-percent more low-end torque available than in the old 2.4-liter car. Minimal turbo lag and the AWD’s ability to precisely place power where the TLX can use it best helps combat a tendency toward understeer: better to brake early into the corners and then squirt out of them, than try to carry too much speed through.

The TLX would probably benefit from summer tires on that front, rather than the all-season shoes Acura fits as standard. In part, though, this is just what you get with a front-heavy vehicle. Acura says it nudged the weight balance to 57:43 – an improvement from the 60:40 of the outgoing TLX, that even saw it move the 12V battery from the front to the rear where it nestles inside the optional spare tire – but physics is a callous mistress nonetheless. 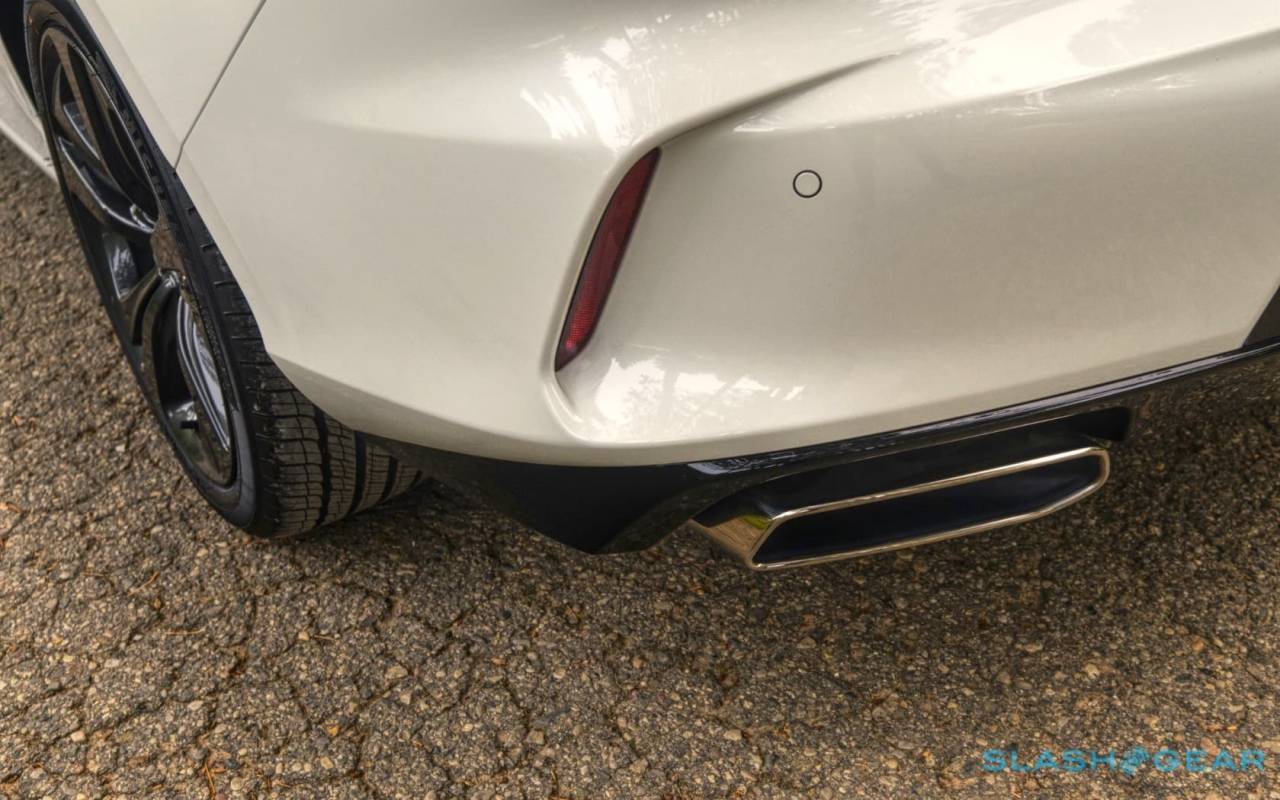 That’s not to say it’s a disappointment, nothing of the sort in fact. Recognize the TLX’s tendencies and you can start having fun: the all-season rubber may squeal a little when pushed, but there’s still decent grip, and though I’m not normally a fan of transmissions with so many gears to choose from, Acura’s ability to shift by up to four ratios in one fell swoop at least means you’re not normally left waiting for the automatic to catch up. There are paddles, of course, if you’d rather shift yourself.

As for the steering, Acura’s variable ratio setup escapes the feeling of unpredictability that some rival systems struggle with, and it’s easy to place the TLX whether in tight corners or lanes on the highway. Similarly, though the trick brake-by-wire system may be dialed back from the aggressive settings in the NSX, it’s effective and easy to modulate without being jerky or grabby. 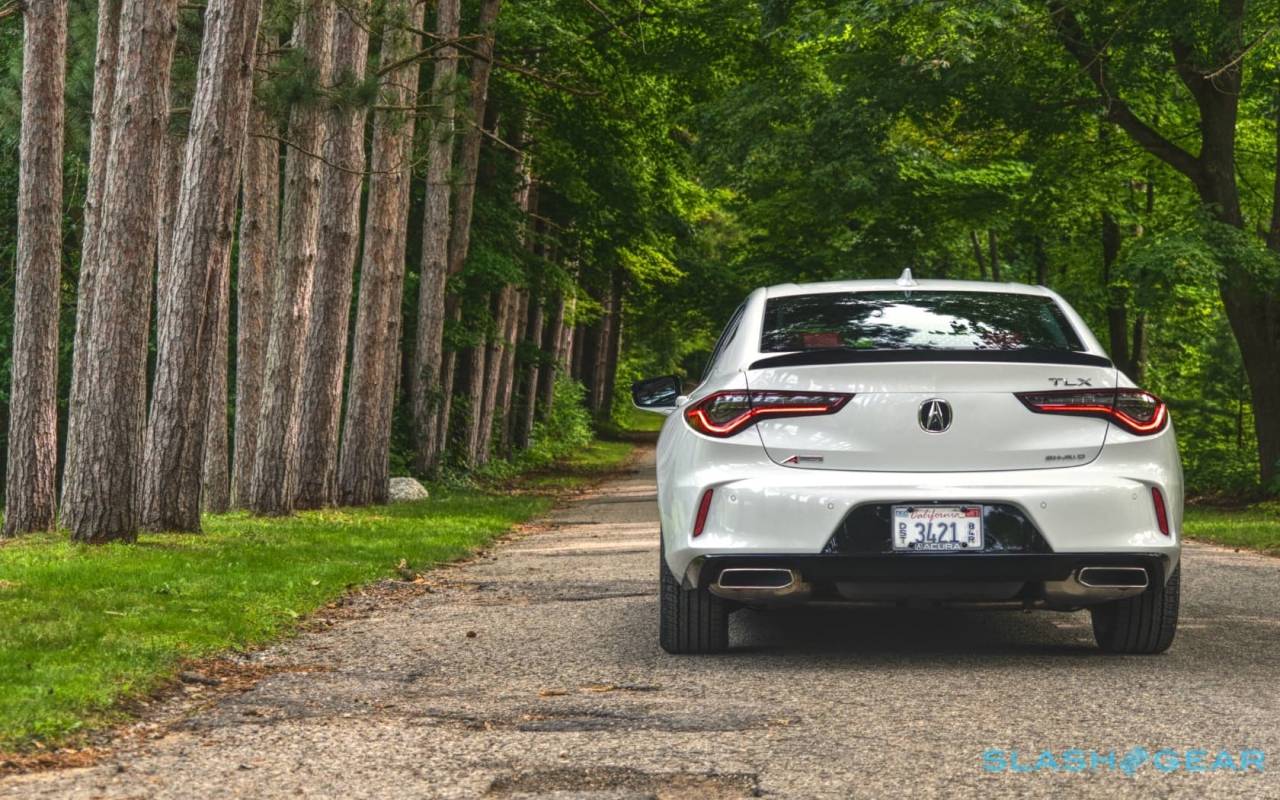 Honestly, I’d expected to be disappointed that Acura saved the adaptive dampers for only the most expensive TLX trim, but I clearly should’ve given the engineers more credit. In fact I prefer the simpler, single-mode dampers in the A-Spec. With their firm ride they aren’t quite as cushy in Normal and Comfort modes as the Advance, but they also escape the occasional floatiness that car’s adaptive system can exhibit when trying to deal with particularly ill-kept asphalt.

In Sport mode, meanwhile, the adaptive dampers are firmer than their single-setting cousins, but it leaves the TLX feeling a little too firm. The TLX isn’t easily unsettled, but you’ll definitely feel the bumps. 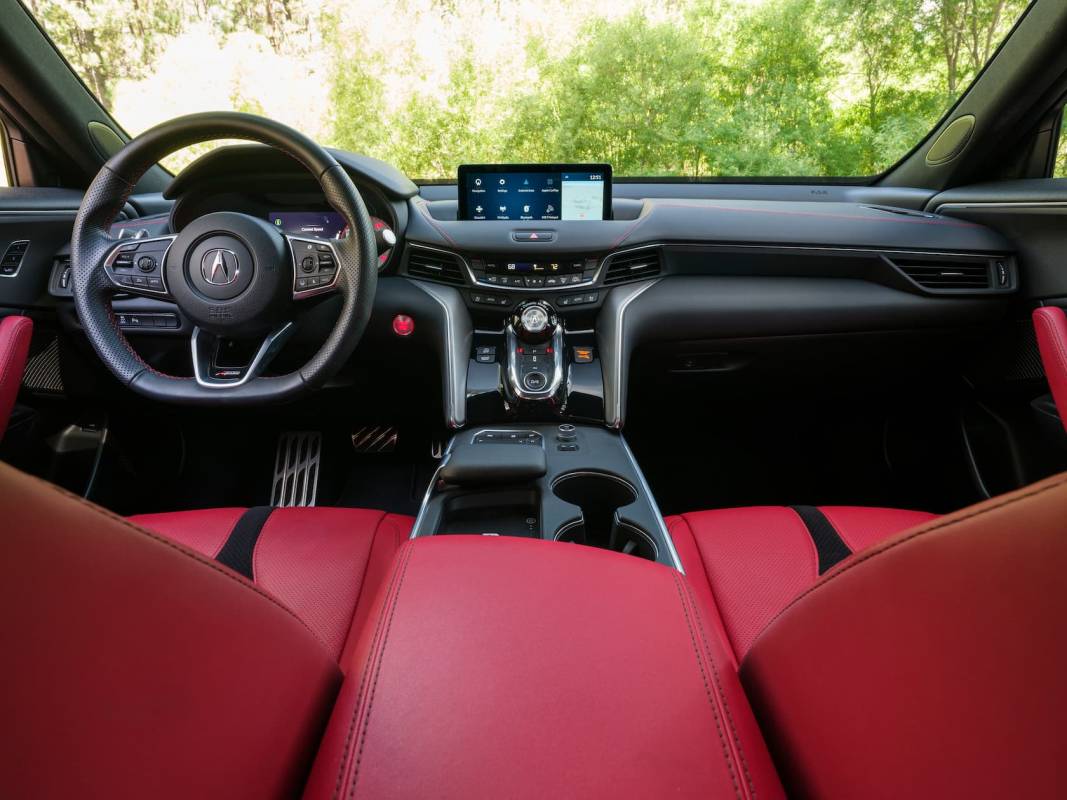 Inside, Acura’s cabin is generally a great place to be. I’ve bemoaned the brand’s obsession with over-designed and excessive plastic trim before, and the new TLX goes a long way to addressing that. The dashboard is still fairly busy to the eye, but the materials have taken a noticeable step up in quality. For the most part, what you see is what you touch: the wood is real open-pore wood; the metal is proper metal. There are still a lot of buttons and knobs, but at least they feel sturdy and premium. 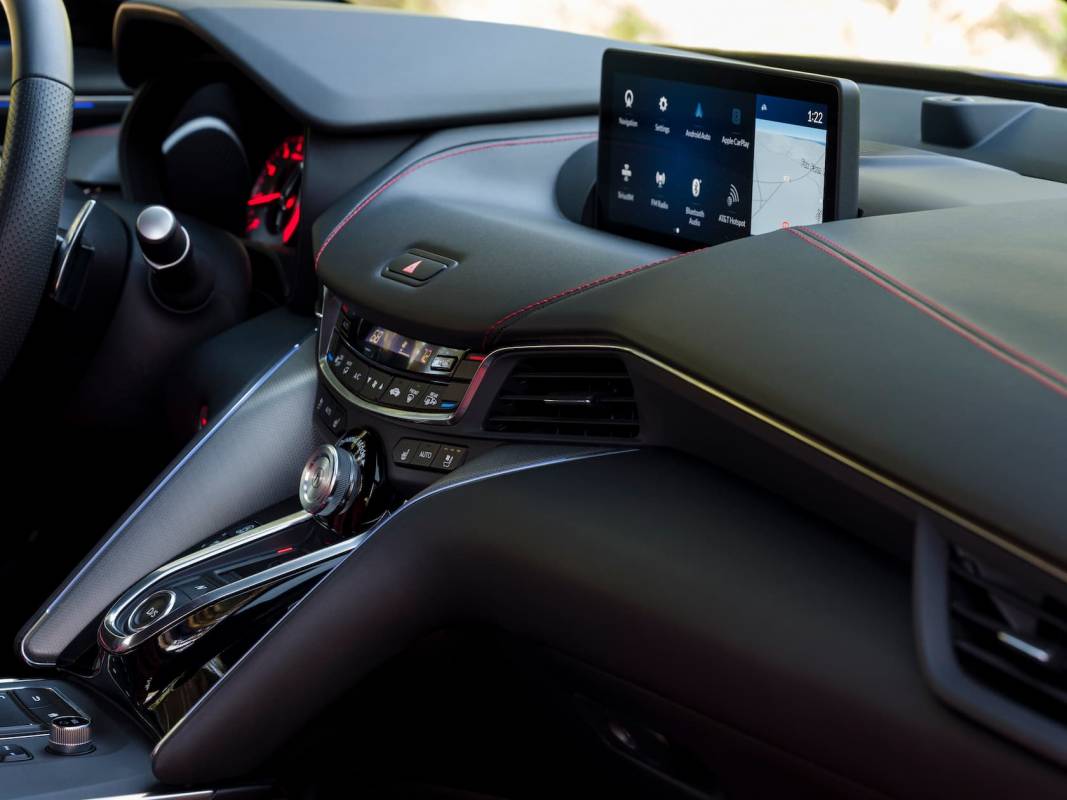 I’m a big fan of the TLX’s front seats, which are not only nicely padded but well spaced thanks to the car’s extra width. Acura says it focused on the driver’s positioning, and that pays dividends with visibility, but the front passenger gets the automaker’s clever new “face-hugger” airbag. The rear feels a little more snug, and 13.5 cu-ft of trunk space isn’t vast; Acura figures that those looking for maximum practicality will continue down the dealership aisles and pick out an SUV instead.

A 10.2-inch Full HD display perches atop the dashboard, but don’t bother reaching for it. As in the RDX, Acura’s True Touchpad Interface puts a trackpad in the center tunnel, the position of icons on-screen mapped to points on its surface. It takes a little getting used to – my inclination is always to touch-and-swipe, which often just confuses things – but Acura says its research shows drivers end up less distracted and keep their eyes on the road more consistently. It also moved the power/volume and track controls down to the side of the touchpad, where they more readily fall to hand. 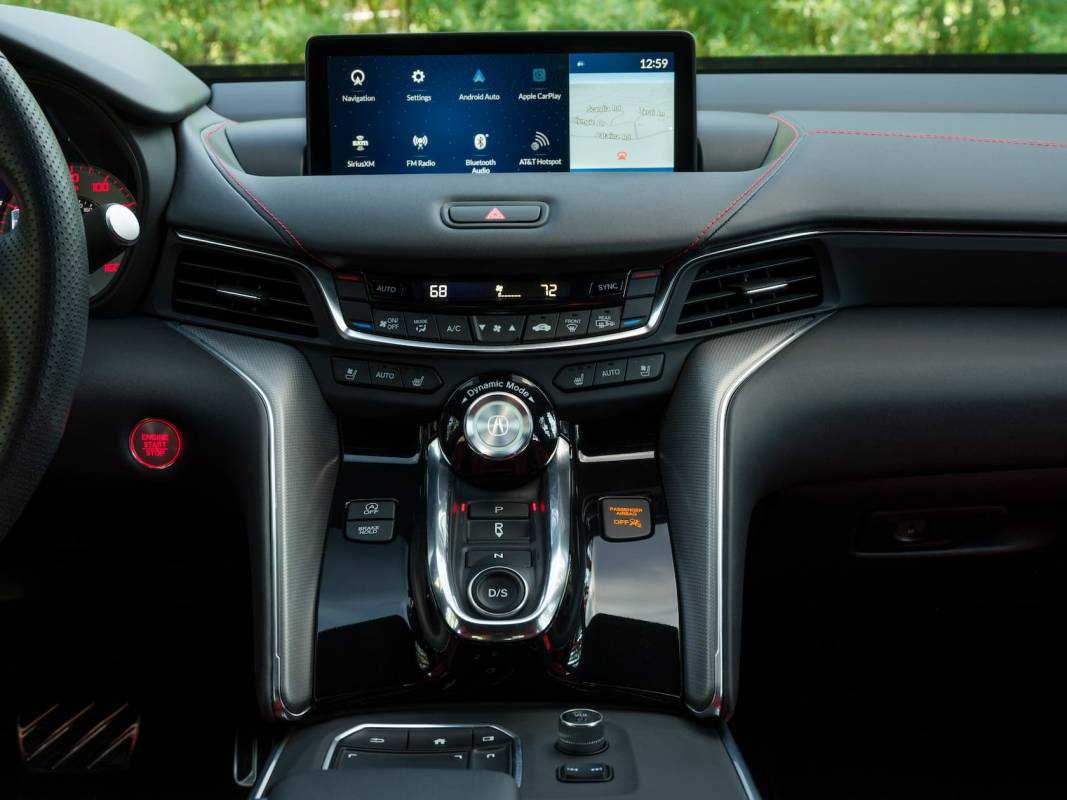 Android Auto and Apple CarPlay – both wired, not wireless – are standard, as is WiFi and support for OTA updates. The top-spec ELS Studio 3D Premium Audio system is, as I’ve written before, worthy of vehicles several multiples of the TLX’s price tag. Higher trim cars get LED color lighting, with three themes linked to the drive modes, and 24 owner-selectable themes apparently inspired by the favored routes of Acura team-members. A sizable 10.5-inch head-up display arrives on the Advance trim. 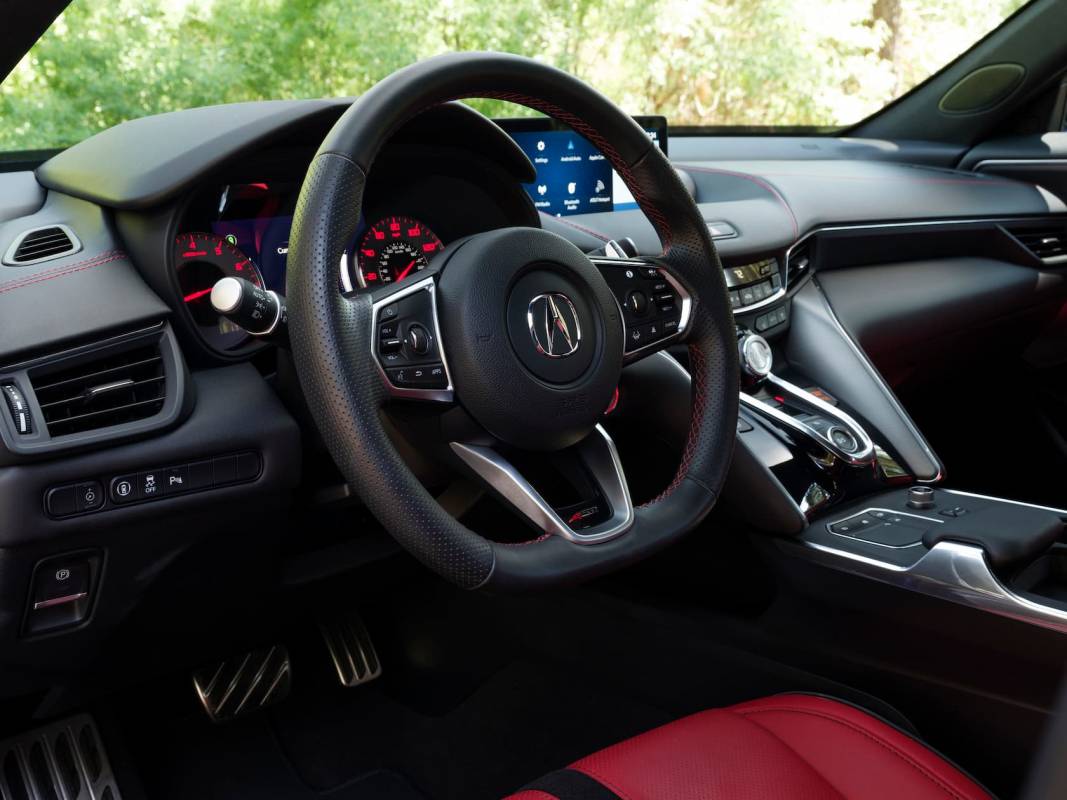 AcuraWatch is standard on all trims, with the suite of active driver safety and assistance tech adding a few new features with the 2021 TLX. You now also get traffic sign recognition, a driver attention monitor, expanded pedestrian detection courtesy of a wider-angle front radar, and Traffic Jam Assist which helps with positioning and lane-keeping at speeds from 0-45 mph. Weirdly, there’s no 360-degree camera option, and the entry-spec TLX misses out on blind spot monitoring too.

All in all, the walkaway feeling about the new TLX is promise. The outgoing TLX may be showing its age, but it still outsells Audi’s A4, Infinity’s Q50, Volvo’s S60, Lexus’ IS, Genesis’ G70, and Alfa Romeo’s Giulia. This new version, larger and better-equipped, improves on its predecessor in basically every way, and suddenly Acura’s goal of grabbing sales among people who might otherwise look to a similarly-priced Audi A4, Mercedes C300, or even a BMW 530i xDrive doesn’t seem as ridiculous as it might first sound. 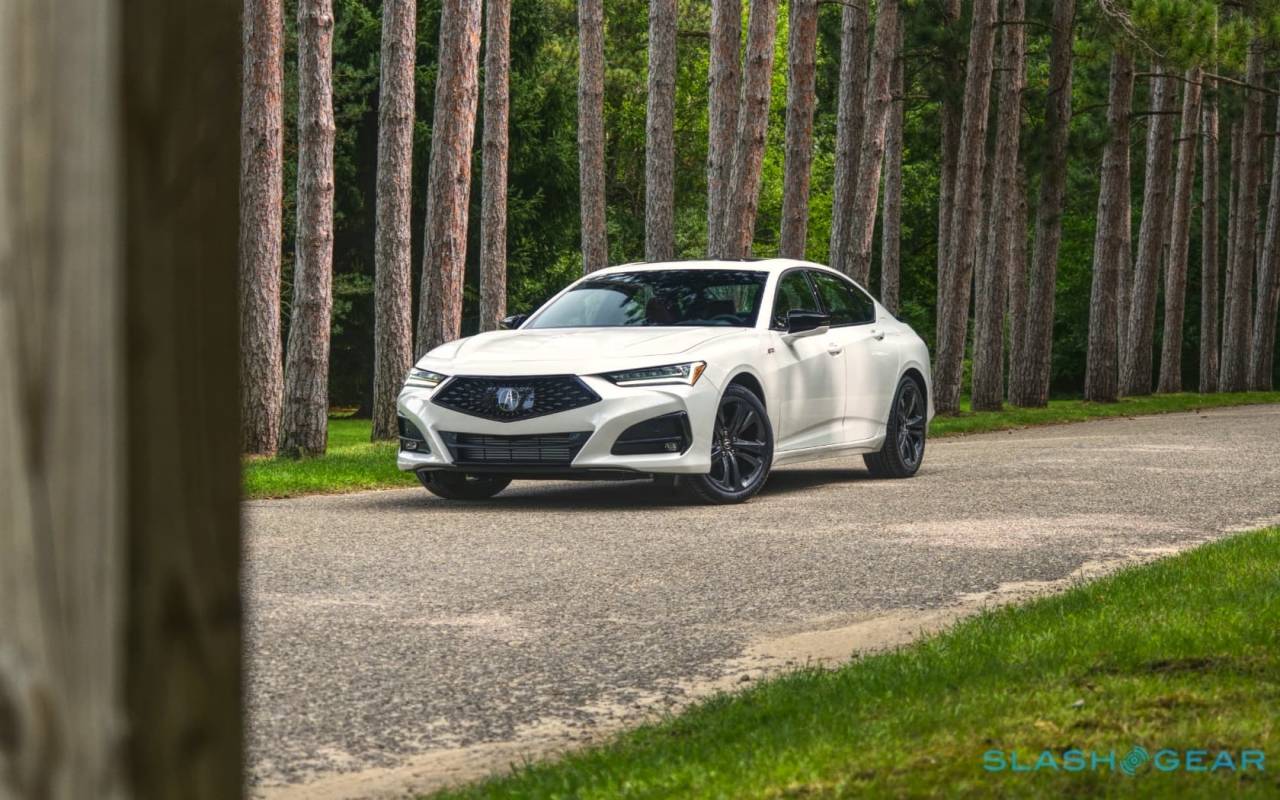 What’s abundantly clear is that Acura has built a platform that’s more than ready for a performance upgrade. The TLX Type S will deliver on that, with a new 3.0-liter twin-turbo V6. That should get 355 hp and 354 lb-ft of torque, uprated Brembo brakes for the 20-inch wheels, and special adaptive suspension tuning.

Don’t discount the regular TLX before that, though. Acura’s primary challenge remains coaxing German-obsessed luxe-sedan buyers to give its four-door a try, but design that turns heads and aggressive pricing are definitely strong moves in the right direction. Once you’re behind the wheel, being convinced by the new TLX’s charms is even easier.