More range, more power, and more like a regular, gasoline Golf than ever, the 2017 Volkswagen e-Golf is an EV you could forget runs on electricity. VW’s sole electric car in the US – which it currently only offers in ten states – it’s the vanguard of the automaker’s big electrification push due in 2020, when a production version of the I.D. concept will hit the streets. That promises can’t-miss-it design, range to rival the Bolt EV, and a whole new platform underneath. For now, though, the e-Golf is more about coaxing VW loyalists into something more surreptitiously green.

Mildly confusingly, the new e-Golf will be sold as a model year 2017 car, despite the remaining new Golf models that will follow it later in the year being model year 2018. It’s actually a calculated play around emissions standards and incentives on VW’s part, trying to squeeze the car in to make the most of what could be the last year some of those incentives apply. 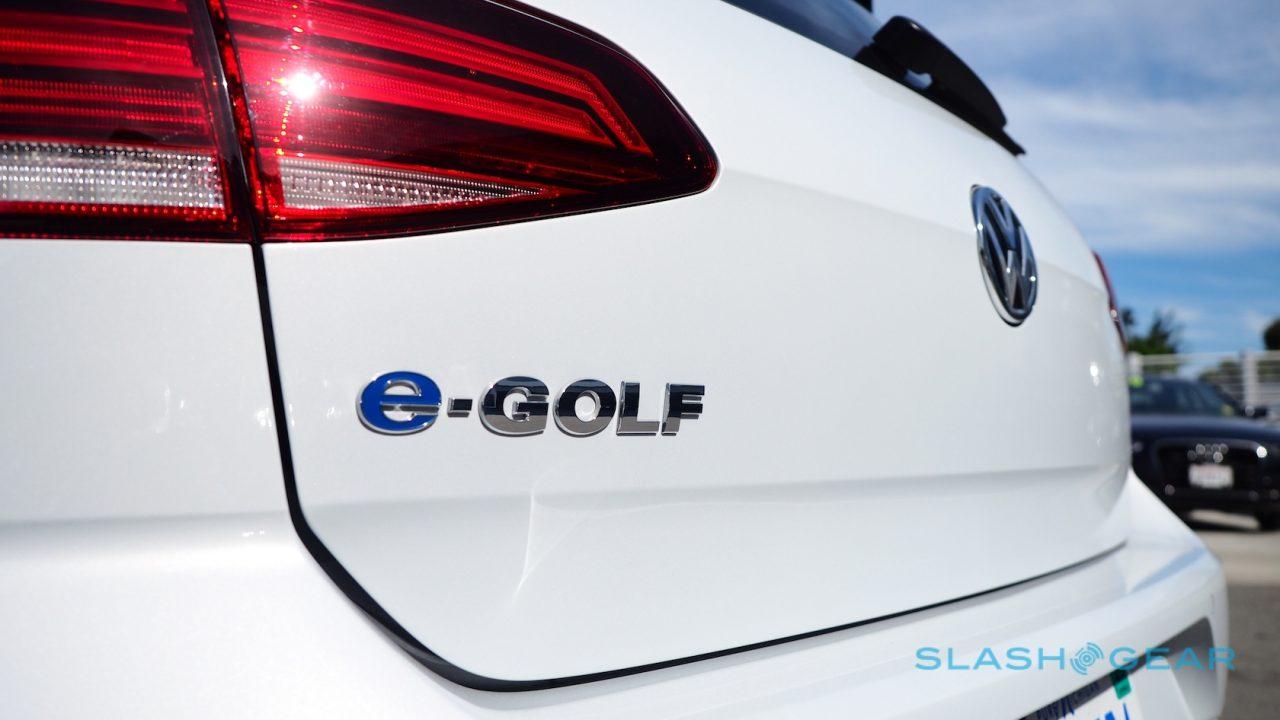 The fundamental improvements over the old e-Golf are range and charging. Volkswagen has slotted in a new, 35.8 kWh battery – up from 24.2 kWh in the 2016 car – which boosts EPA range from 83 miles to 125 miles. A 7.2 kW onboard charger is now standard across all 2017 e-Golf trims, while DC Fast Charging is standard on the higher level Limited Edition and SEL Premium trims (and remains an option on the base SE). Plug in a 240V Level 2 charger and you could get a full battery in under six hours; manage to locate a DC fast charger, and you’ll get 80-percent in about 45 minutes.

It’s an improvement that nudges the e-Golf over that all-important three-figure range barrier. It may still be a mental block more than a practical one for most drivers – the typical daily commute is more like a third of the new e-Golf’s potential range – but with many still skeptical about whether an EV could work for them as a daily driver, it’s vital that VW address it.

On the road, I took the 2017 e-Golf on a trip from San Rafael in the north bay above San Francisco, and down the coast to scenic Half Moon Bay. It’s a roughly 90 mile round trip, incorporating a mixture of highway, coast road, and urban traffic, not to mention some significant hills. Starting out, the trip computer read 125 miles; with the HVAC on, and cycling through the various drive modes – more on which in a moment – I made it there and back with almost exactly the distance I’d traveled knocked off. 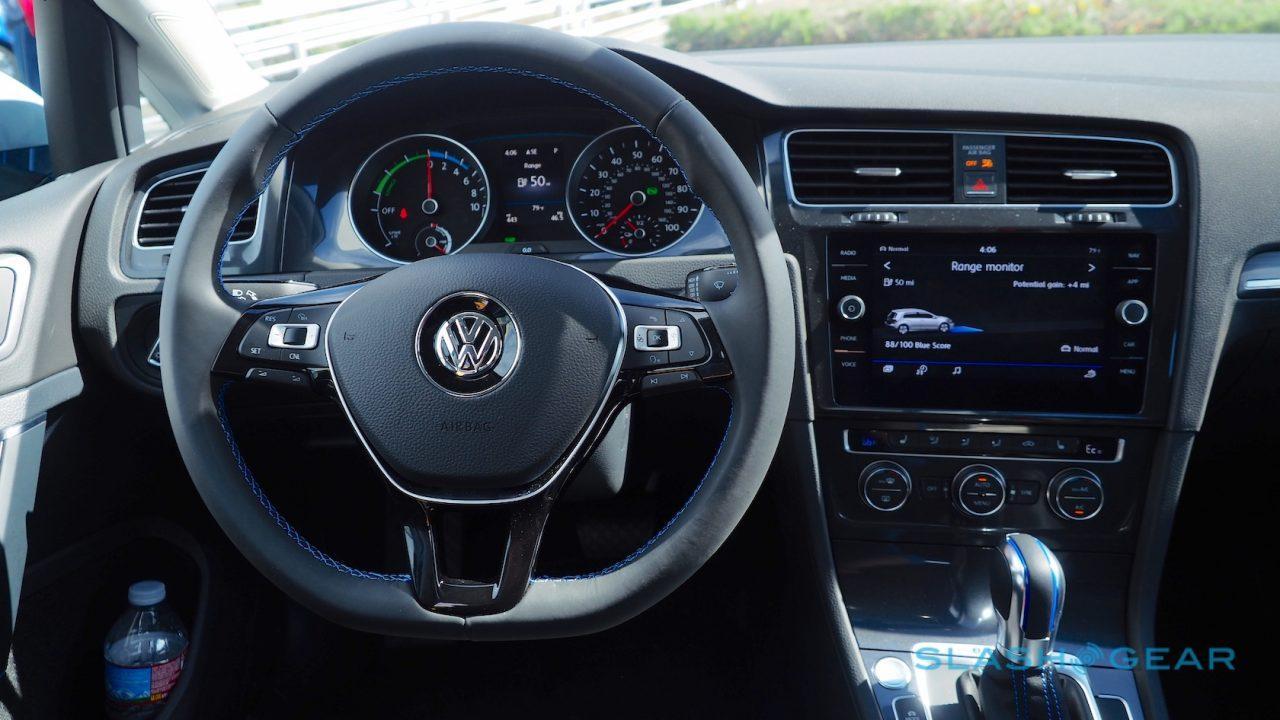 For the 2017 car, VW has dropped in a new 100 kW electric motor, for 134 HP rather than the 115 HP of the old car. Torque is up from 119 to 214 lb-ft, while the top speed is now 85 mph and the 0-60 mph run comes in 9.6 seconds. In short, this is no Tesla Model S in Ludicrous Mode, though that instantaneous EV torque leaves it feeling perky in city driving. Push your right foot all the way and the “kick down” point where a regular automatic car would drop a gear or two is replaced in the e-Golf with a surge of electric power. Notably, that happens even if you’re in the most frugal of the drive modes, which came in useful when trying to get ahead of another driver trying to merge into my lane.

On the outside, you’d probably need to be a true e-Golf aficionado in order to recognize the changes at the front. LED lights are standard at both ends, complete with some blue highlights to give a little extra differentiation between this and the gasoline cars, and the EV’s distinctive C-shaped daytime running lights are carried over too. Updates are more noticeable at the rear, with new horizontal light patterns in the clusters, and a new lower valance.

That’s picked out with a chrome trim strip that arches up over a faux-diffuser. Volkswagen’s designers also decided to add two oval openings, where you might expect to find the tailpipes on a gasoline car. It’s an odd little flourish for a vehicle on which the absence of an exhaust system is usually a key selling point. 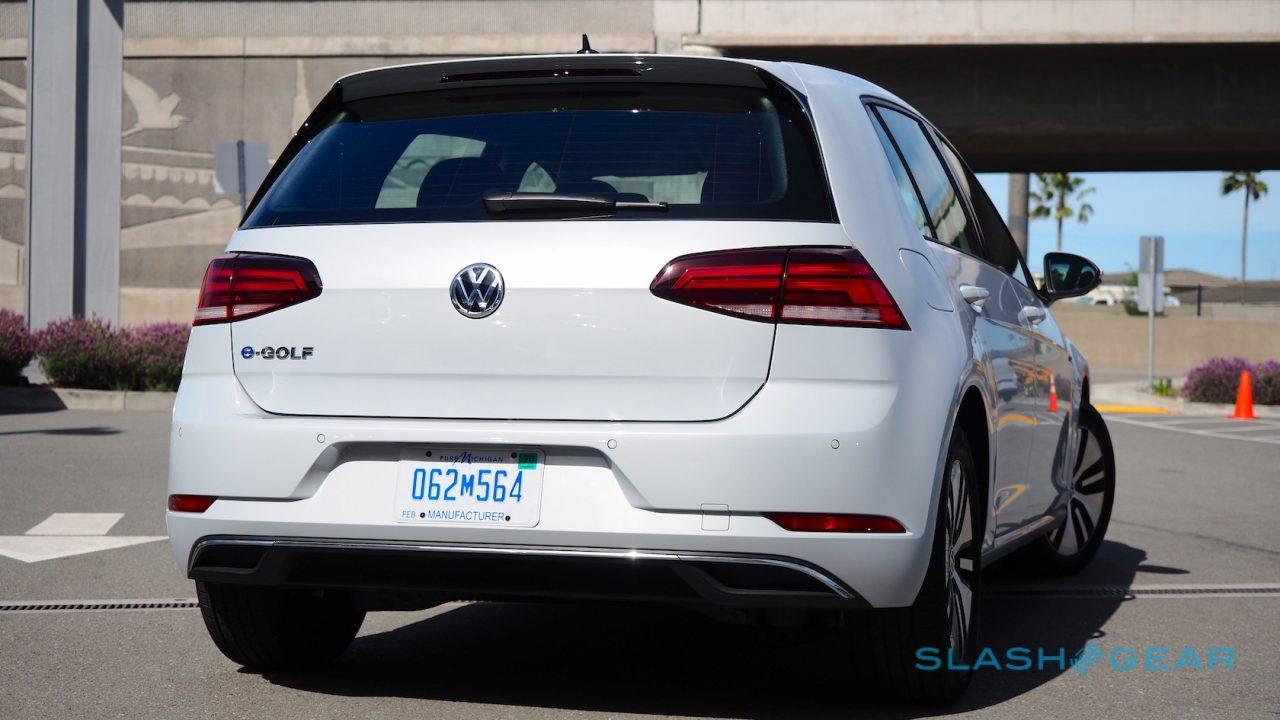 Inside, the most notable change is the introduction of VW’s new infotainment system, an 8-inch glass-topped touchscreen in the center stack. It’s swifter and smoother than the old system, though what it shows – particularly in the EV-specific menus – is much the same. It, cruise control, and a leather-wrapped steering wheel are standard on the entry-level e-Golf SE; the e-Golf Limited Edition throws in leatherette seats and parking distance control, along with DC Fast Charging.

Finally the 2017 e-Golf SEL Premium opens the door to an optional Driver Assistance package that includes adaptive cruise control, forward collision warnings with autonomous emergency braking, blind-spot monitoring, lane assist, and more. It’ll also include the 12.3-inch Volkswagen Digital Cockpit, which replaces the regular gages with an LCD, much in the vein of Audi’s Virtual Cockpit. That’ll be available slightly after the first 2017 e-Golf cars hit dealerships, in Q3 this year.

Just as with the previous e-Golf, my lingering impression of the 2017 car is that VW worked hard to make it as painless a transition as possible for those familiar with its gasoline siblings. Unlike the Bolt EV, which has a cabin and dashboard about as far from any other Chevy as you could imagine, the Volkswagen is a Golf first and then an electric car. That’s both a good and a bad thing. 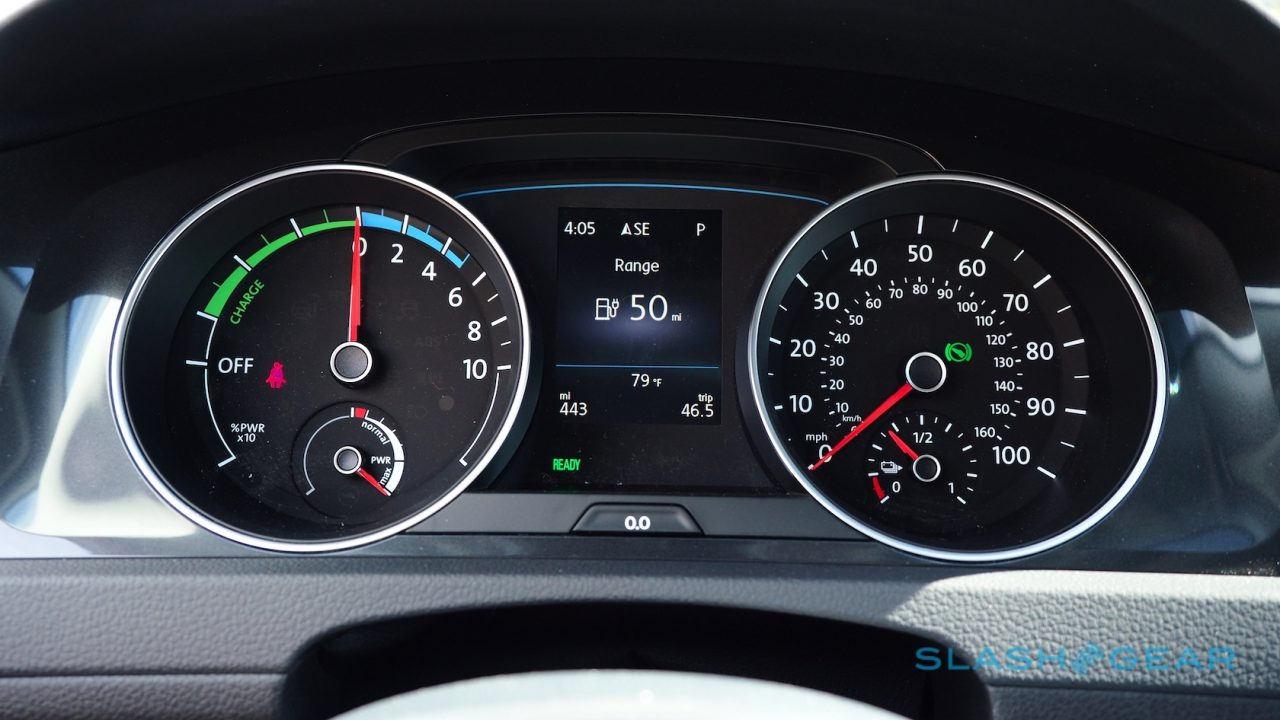 On the plus side, it’s easy to drive. You get the same gage layout in the driver’s cluster, only the tachometer now shows real-time electric power or charge status, while the fuel gage is now a battery meter. A fairly small display sandwiched in the middle can show speed, range, upcoming navigation instructions, or various other data, though only one at a time. If you’ve driven a recent Golf, then getting into the e-Golf, hitting the start button, and just getting on with driving should be second-nature.

Less welcome is how some of the EV-specific settings feel like they’ve been squeezed in, with confusion the result. Like other electric cars, there’s a regular “D” mode and a second, high-regeneration mode which VW dubs “B” (other automakers variously refer to it as “L” or “one-pedal driving”); you switch between the two by pulling the gearstick back, in what in any other VW Group car would flip you into Sport mode. Pushing the stick left or right, meanwhile, doesn’t step through the gears in semi-manual mode like in a gasoline car, because there’s no gearbox in an EV: instead, when you’re in “D”, it steps you through four different aggression levels of regenerative braking. The strongest level, VW tells me, is equivalent to the strength you’d experience in “B” mode.

But wait, there’s more. A button down by the gearstick toggles between three drive modes – Normal, Eco, and Eco+ – which also affect how the e-Golf uses power. In Eco and Eco+ your maximum power is capped, while things like the HVAC system are ramped down so as to be more frugal. In all, with every combination of drive and transmission mode accounted for, there are twelve different possibilities, which seems a little overwhelming. 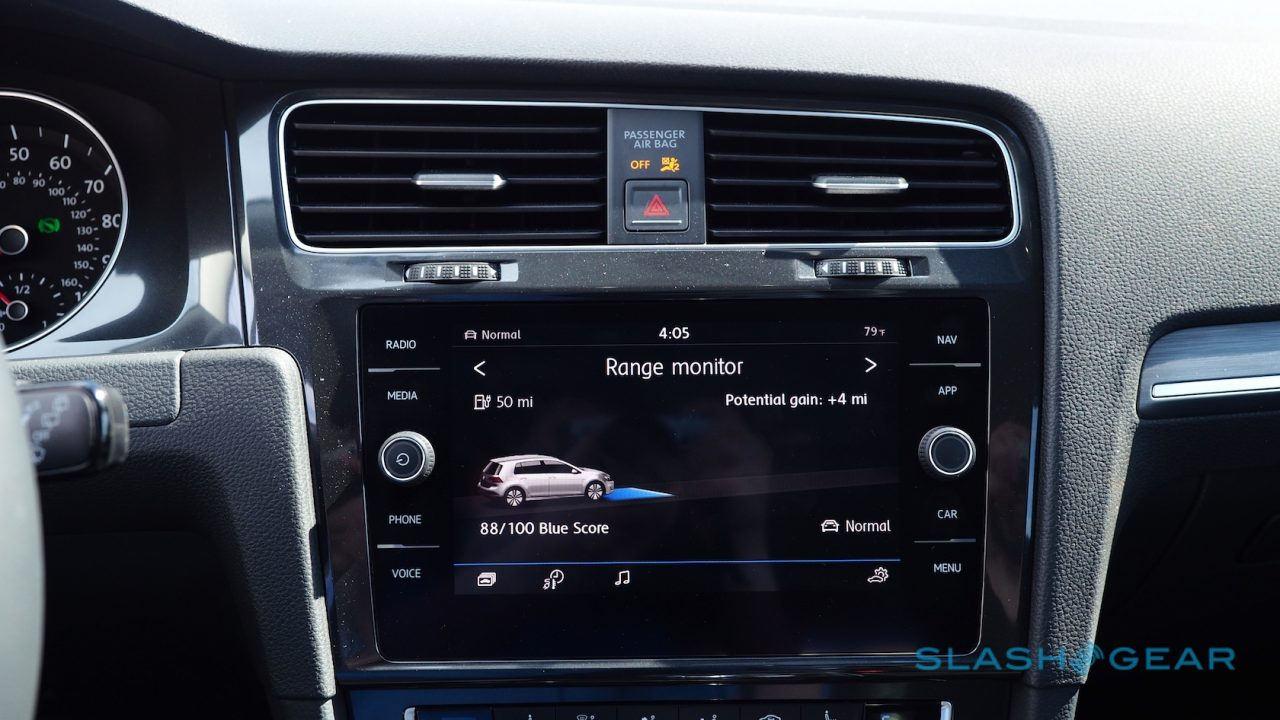 I can’t help but think that VW might’ve done better condensing all those options down into some simpler menus on its big new touchscreen instead. I’d also have preferred more aggressive regenerative braking in its “B” mode, since I had to resort to using the brake far more in the e-Golf than I did in the Bolt EV. The Volkswagen will definitely slow significantly when you lift your right foot, but with nowhere near the same alacrity as in the Chevrolet.

There are two schools of thought in electric cars right now. If you’re an automaker you can either build a new vehicle from the ground up, or you can add electrification to an existing platform. In the case of the e-Golf, which takes the latter strategy, the upside is a car that’s in many ways indistinguishable from its internal-combustion counterparts. The downside is that it can feel like electrification was retrofitted, even if the underlying platform was, VW insists, designed with an EV variant in mind. 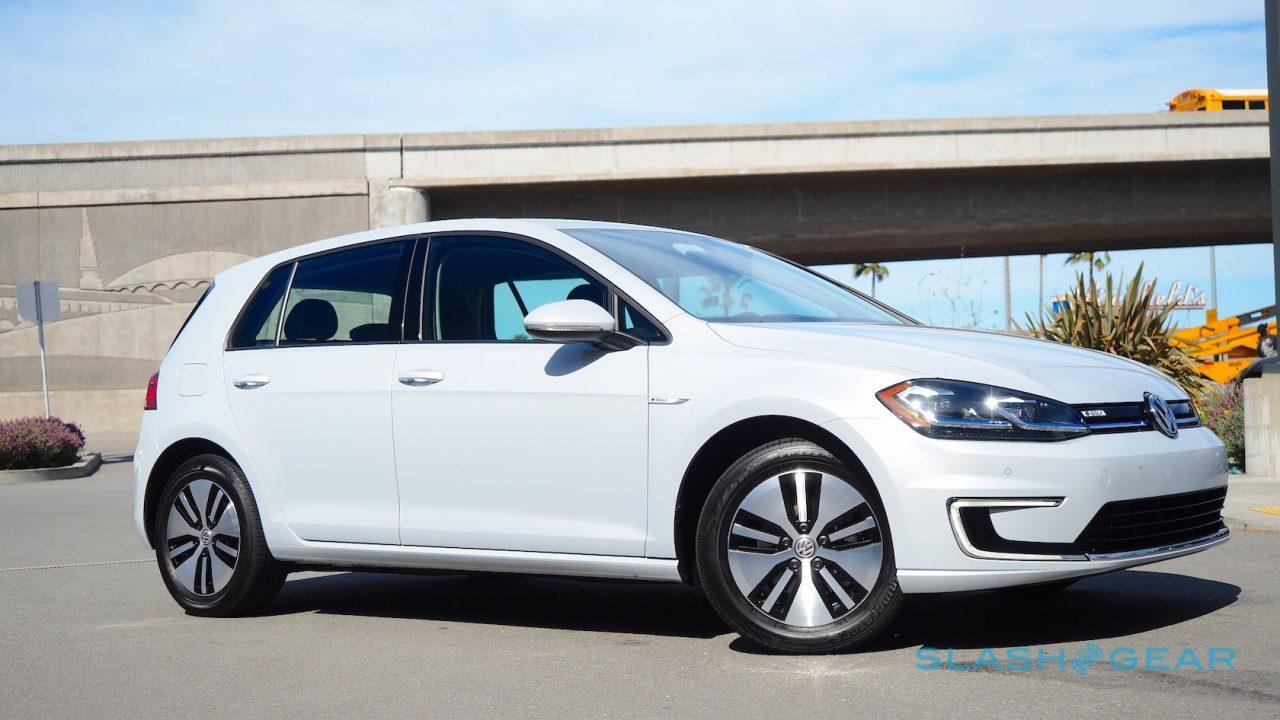 How appealing the e-Golf is, therefore, depends on how much you want to drive a Golf. Final pricing hasn’t been decided upon yet, and VW can’t say exactly when the 2017 car will show up in dealerships; the 2016 car comes in at $28,995 for the SE and $35,595 for the SEL Premium (before any tax credits or subsidies) and I’d not expect a huge bump from those numbers. So here’s your big decision.

The Chevrolet Bolt EV is a little more expensive, a lot more geeky in the cabin, and has a whopping 238 mile range (which, as I discovered, is a conservative number). The 2017 e-Golf looks like a Golf and drives like a Golf, promises an achievable but not outstanding 125 mile range, and focuses more on slotting unobtrusively into your life. One car wears its oddball EV identity on its sleeve; the other plays its electrification close to its chest. If you’ve held off from buying an electric car because you’re less about shouting your green credentials than you are just driving, the 2017 VW e-Golf is worth considering, but green range addicts will need to wait a few years for the Volkswagen I.D. to arrive.