Was Facebook Holding Game Improvements Back for Google+ Release?

Earlier today we were graced with news from Google Senior Vice President Vic Gundotra about the fifth tab at the top of the Google+ social network, that being the Games tab, it rolling out with a total of 12 games to start including the smash hit Angry Birds, Zynga Poker, and Bejeweled Blitz. In response, it seems, tonight we’re to understand that Facebook has just finished several features ready for release today, this announced by Jared Morgenstern at 7:21pm Central Standard time. This release is separated into three sections: A new game ticker, More room to play, and Bookmark your Favorites. One can’t help but wonder if these updates were being held back in wait for Google releasing their inevitable games tab, much in the same spirit of the “Awesome” announcement of Skype / Facebook integration days after the initial release of Google+ in Beta mode.

In essentially the same manner Google+ will soon have a separate stream for games from its main feed of shares made by people in a users circles, Facebook will now have a separate stream of friends’ game activity, including scores and achievements in a ticker. Each story will continue to be in a similar format to what we’ve been seeing in games in the main news feed now, linking in to games your friends are playing with updates about those games. You may also control who sees which updates about the games you’re playing (much in the same fashion Google+ uses circles) by heading to your Settings.

Each game will now have what appears to be a much larger screen for playing, many apps now able to expand to full screen. CityVille, Zoo World, Monster World, and Mystery Manor will be upgraded to this full-size ability inside the next few days. Go big! 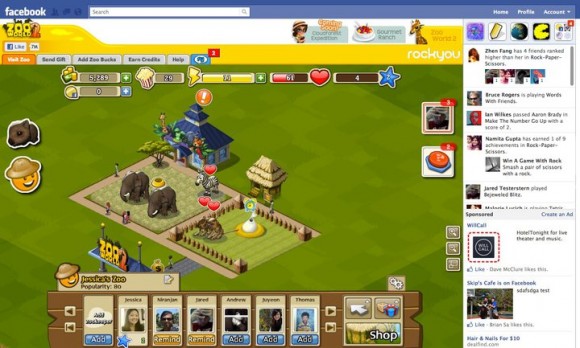 A new menu header will now be added to the left side of your screen for “Apps.” To work with this new bookmark menu, click the menu next to the bookmark and poof! There it goes. You may also remove, edit, and rearrange as you see fit, as well as edit settings. 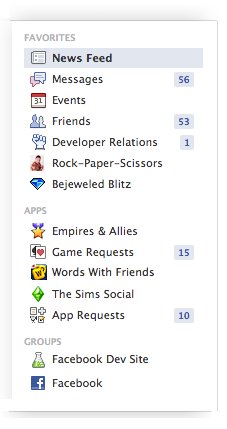 Seem similar to the Google+ Games release from earlier today? Or is it just a coincidence that Facebook had this release prepared for today? And what about social gaming? Will you be sticking with the Facebook crowd, or will you move over with the Google+ crowd for games like Farmville? How strange would it be to start over if you’ve been using your Facebook account for years?