In an “Awesome” announcement on the 6th of July, 2011, Mark Zuckerberg announced several new items for their popular social networking site. The first item was Group Chat, the next was a New Design, and the most “Awesome” of the three is Facebook working with Skype for video calling. This move was seen by many chatters in the livestream room at http://www.facebook.com/FacebookLive where the announcement was streamed live. Mark noted that they were excited about announcing one item at a time instead of doing it like “Companies that focus will always do better than ones that try to do a million things.” Sound like anyone you know?

Inside group chat you’ll also find the “New Design” announced today for Facebook, a design that incorporates the ability to adjust for browser size. You’ll be able to see a list of people online at any given time (a feature currently in a smaller window in your bottom bar,) and the entire chat interface will be revamped for ease of use AND so that you’ll be able to have more than one person in a chat window. The Chat Sidebar and the ability to simply add several people into a single chat is what Facebook meant for you to take away from this announcement, it was quite clear. 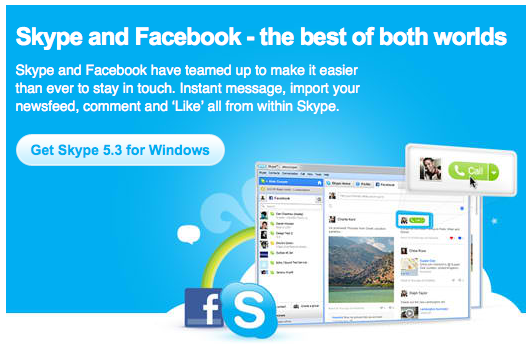 There will be a brand new Call button on Facebook rolling out today if not soon for all Facebook users. You’ll be able to Facebook chat to a friend, see if they’d like to have a nice video chat, and connect to them with the Call button. You’ll have to download an applet to your browser to make Video Calling work, and it SHOULD work within 30 seconds.

“No separate accounts, no separate connections, on a network that already has all your friends on it.”
Philip Su, Software Engineer, Facebook.

How this will compare to Google+’s Hangouts is asked by Mashable in the Q and A session. In response to the question “and what do you think about Google+”, Zuckerberg notes that he feels that Google+ social dip is sort of “validation” that the way he and the Facebook team sees the social future is truly the way it’ll be. No worries!

“As far as the Google stuff goes, I’m not going to say a lot. The next 5 years are about building apps. A lot of companies that haven’t been social in the past, not just Google, will be building social apps. In some cases they’ll build on existing infrastructure, in some they’ll build their own. Facebook’s job is to stay focused.” – Zuckerberg

Will all of this affect how Microsoft continues to invest in Skype? At the time the announcements were made, the only feature instantly live was group chat. We’ll see how this all plays out once all these services (including the other ominous gigantic social network of which we’ve been speaking) are fully up and running.