Ford and Chevrolet need to watch out. Volkswagen hasn’t just made a compelling pickup in the VW Atlas Tanoak, it’s demonstrated that – should it decide to give its utility the green-light – domestic automakers in the US would be right to be apprehensive.

That’s a big achievement for a company that isn’t exactly known for its big utility vehicles. Volkswagen started with the Atlas 7-seat SUV and its underlying MQB platform, then injected 16 inches of extra length. Measuring in at over 214 inches it’s right in the midst of the midsize pickup class, and has been lifted for almost 10-inches of clearance. At the back, there’s a 64-inch long bed, while the cabin has room for five. 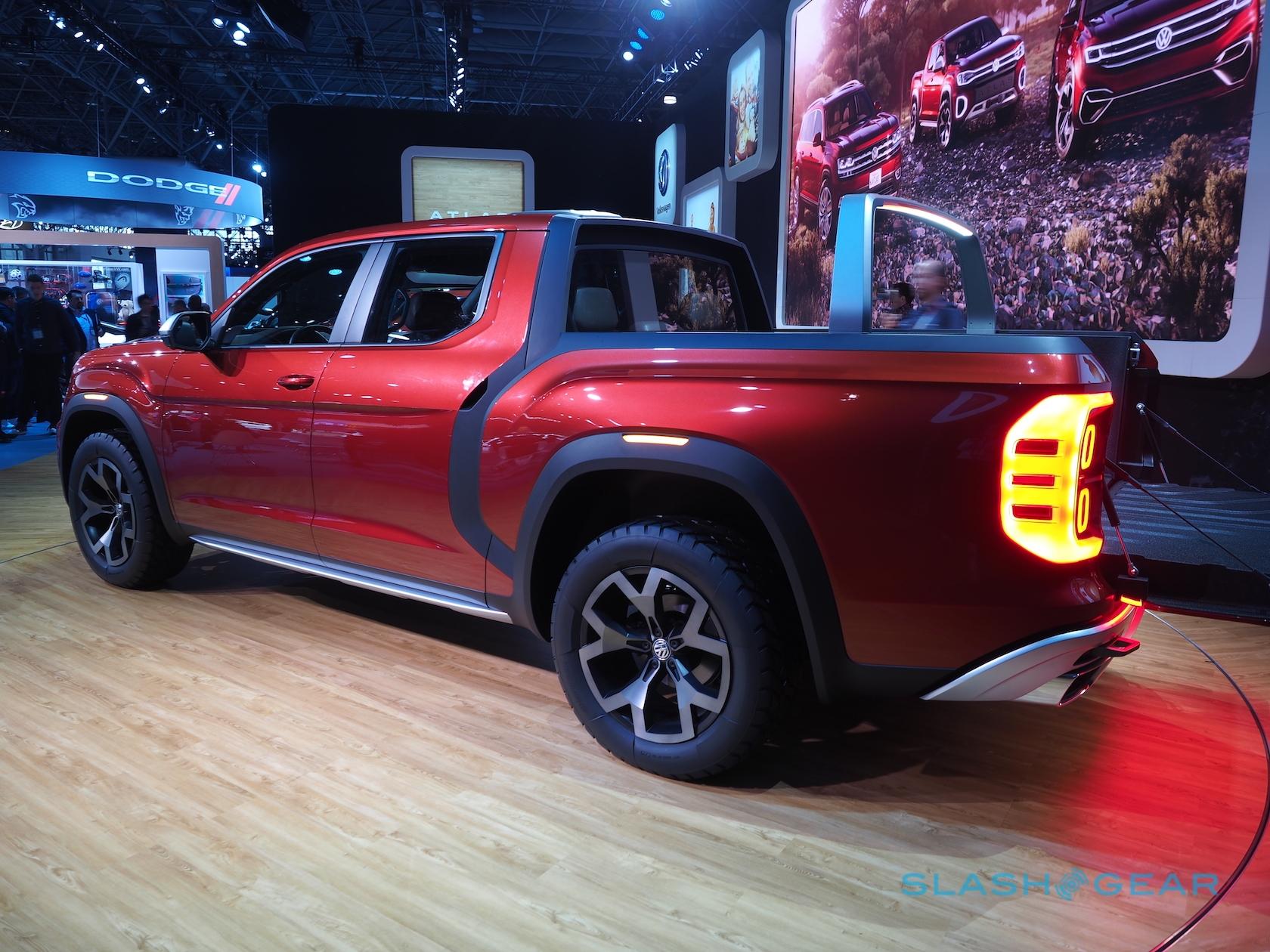 The numbers don’t do the reality justice, however. For a start there’s the beefy looks, clearly related to the Atlas SUV – and, indeed, the smaller Atlas Cross Sport Concept which VW also debuted this week at the New York show – but with the bulging proportions of a superhero. The fenders flare atop deeply knurled 20-inch off-road wheels like a lunar rover, while the air vents in the swollen lower bumper gape greedily.

VW sensibly doesn’t do a thing to disguise that, either, and in fact picks out those details with some judicious LED lighting. The automaker has gradually been increasing the amount of exterior lighting it has been building into its recent cars and concepts, but the Atlas Tanoak pushes that to even greater levels. The daytime running lights not only extend all the way across the two-bar grille to the illuminated VW badge, but are animated with it. 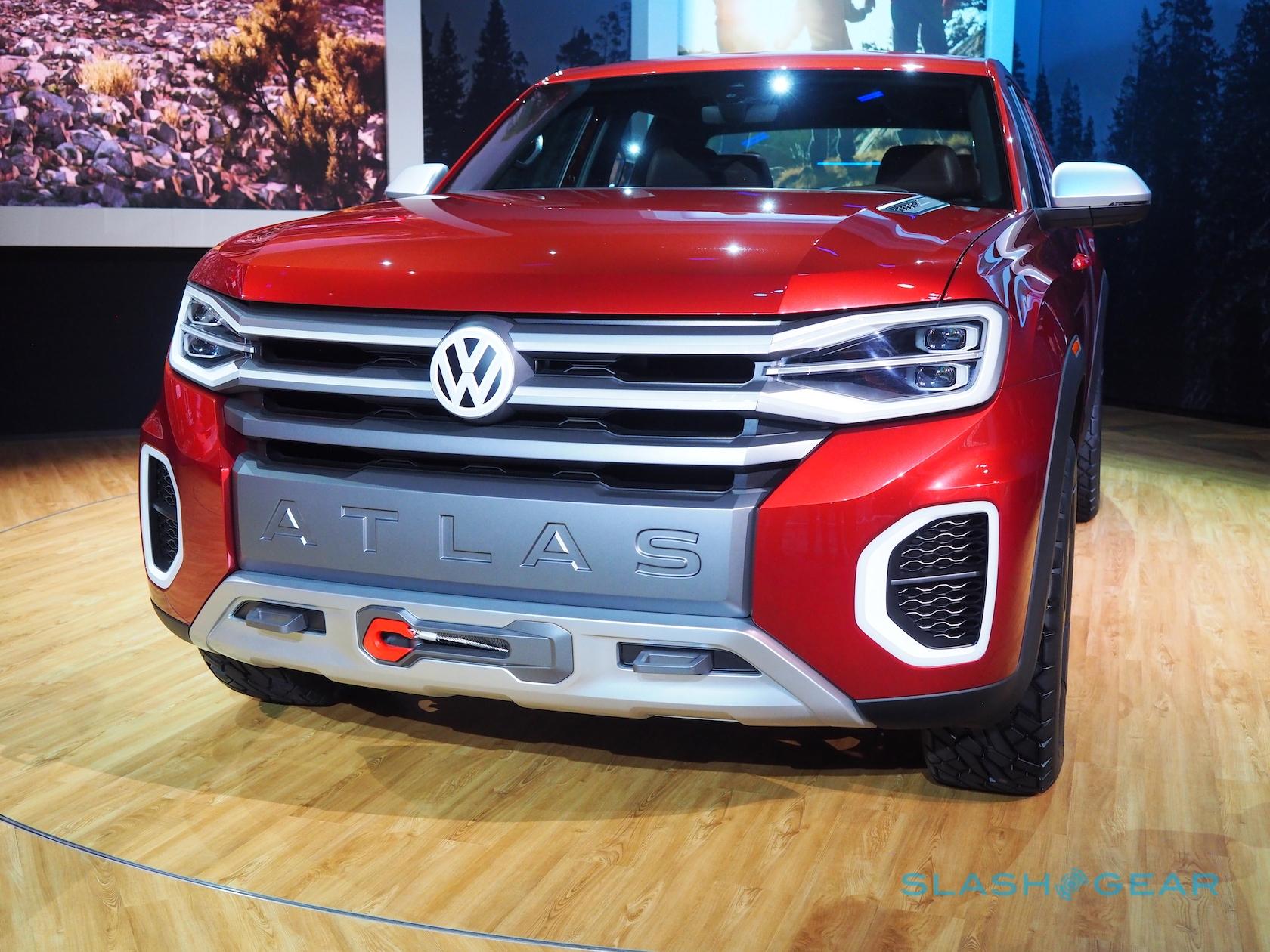 The same exaggerated proportions continue at the rear, with the bed clearly distinct from the double-cab by virtue of a sweeping trim line. It’s echoed by a silver rail that arches over the top, and which can slide along on rails to act as a support for upright cargo like surfboards or sheets of plywood. It looks great but, more importantly, it’s useful functionality that other pickup makers aren’t yet offering. Even better, just like cars have offered “ski hatches” that allow pass-through from the trunk to the cabin, the Atlas Tanoak has a hatch behind the cab which allows even longer cargo to run right through. 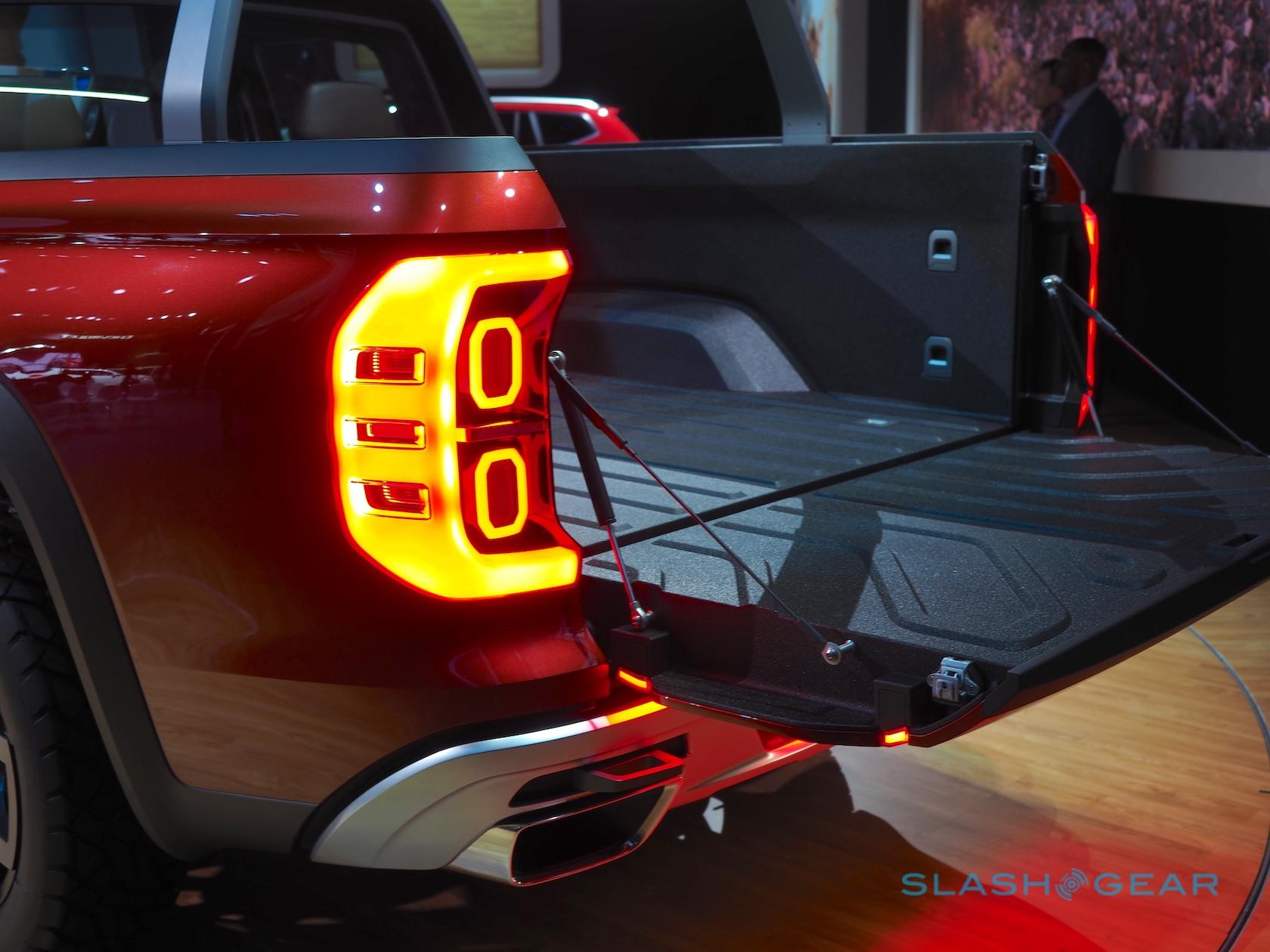 Inside, the Atlas’ car roots are showing, but in all the right ways. Just like in a Honda Ridgeline, the experience behind the wheel is more car than utility; where the Honda is stolidly earnest, though, the Atlas Tanoak can take greater liberties. Pinstripe LED lighting runs the shoulder-line of the cabin, changing between blue and yellow depending on which drive mode you’re in. The steering wheel is a chunky, thick-rimmed affair that feels like it could’ve been pulled from a sports car. It’s studded with thick metal control pods, hewn from single billets and both looking and feeling every bit as rugged as a pickup itself should. 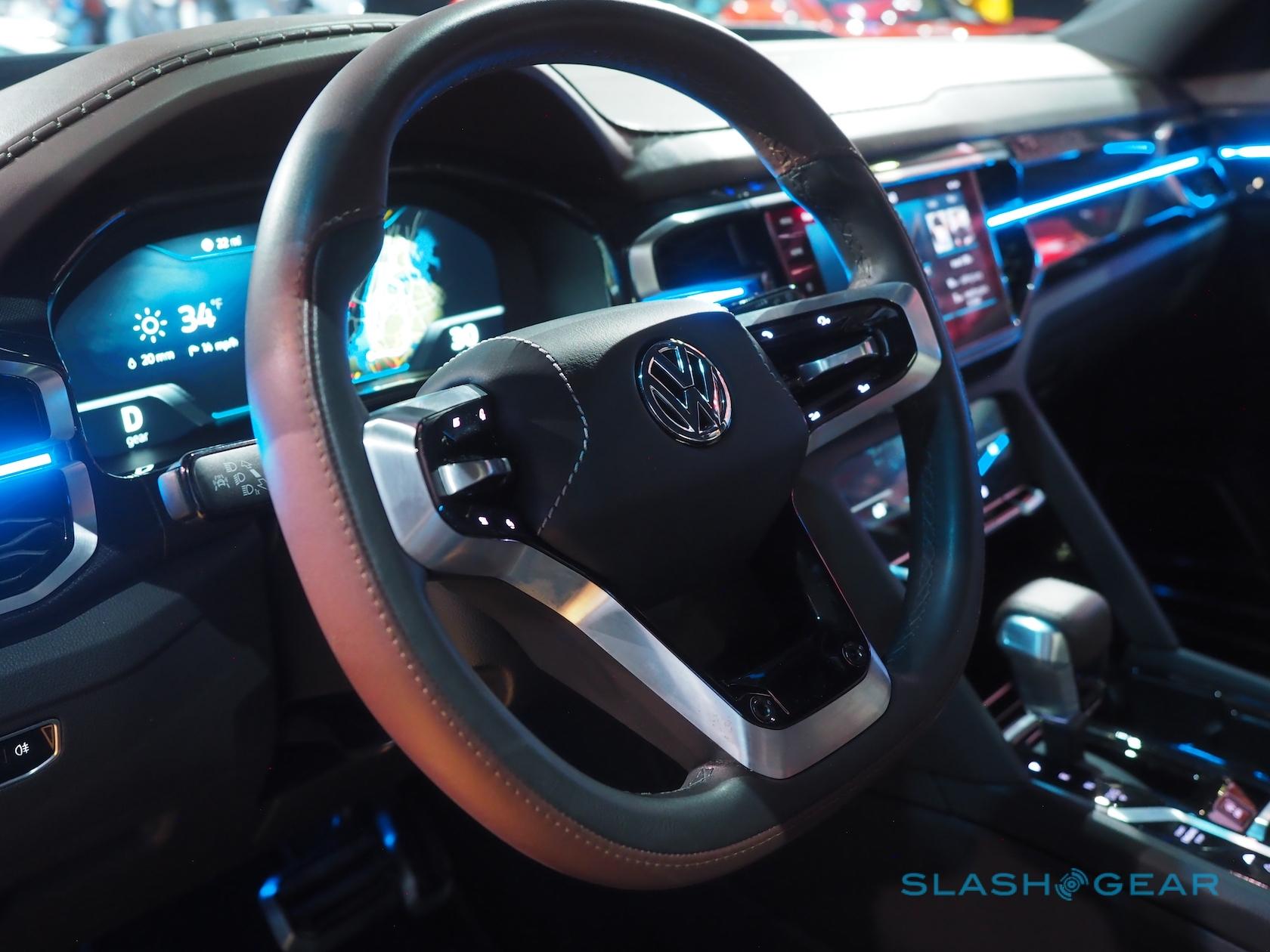 Then there’s the technology. The digital instrumentation that replaces the analog gages is a league ahead of what just about every truck out there offers today, while VW’s infotainment system gets a big touchscreen to play with in the center console. Underneath there’s a second display, for the HVAC functionality. Happily Volkswagen’s designers have still included not only physical controls, but ones big enough that you could still toggle and tap them while wearing work gloves. 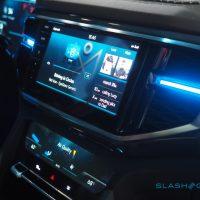 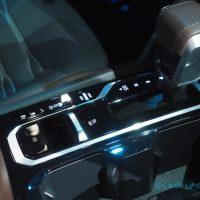 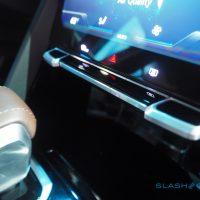 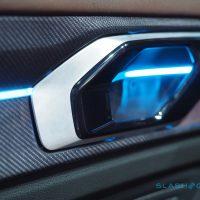 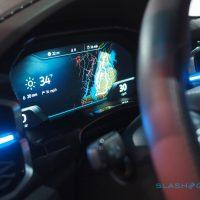 If there’s an oddity in the mix, it’s that VW – for all its recent talk of being on the accelerating train toward widespread electrification – opted to make the Atlas Tanoak a pure gasoline truck. The 3.6-liter V6 certainly isn’t a slouch, with its 276 horsepower and 266 lb-ft. of torque, and with all-wheel drive it shouldn’t be fazed in the mud. Still, a hybrid would fit much better in Volkswagen’s current line-up, and we can’t help but imagine how the Tanoak equivalent of a Ford F-150 Raptor might perform. 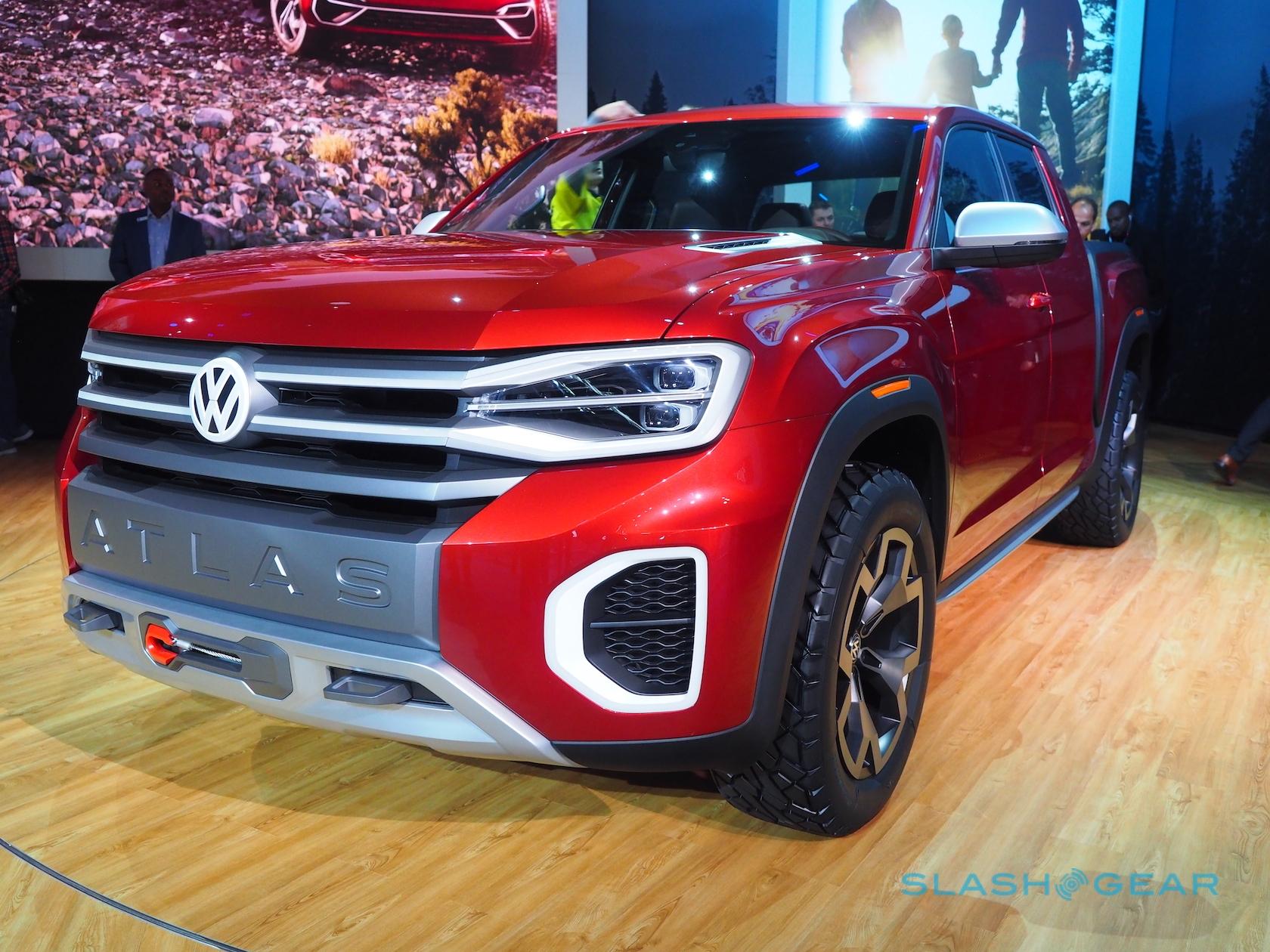 Our biggest frustration, of course, is that VW is insisting that right now it has no production plans for the truck. The goal is to get feedback, with the automaker saying that it recognizes just how important pickups are to the US market. Still, according to Klaus Bischoff, Executive Director of Volkswagen Design, the go-anywhere looks aren’t just for the show.

“When we do show cars we always take a deep look into feasibility,” he explained to us, suggesting that what we see in concept form now wouldn’t necessarily be too far from something VW could actually produce. “In principle we could build this. The decision is what we need.”

For what it’s worth, VW, consider us convinced.