Vizio’s VIA Plus Google TV and Android smartphone and tablet aren’t the company’s only new products for CES 2011; the company also has a fresh range of Theater 3D HDTVs running the gamut of 22- to 71-inches. The passive 3D sets use battery-free glasses, and all models get Vizio’s regular VIA apps – including Netflix, Facebook, Amazon Video on Demand, and Yahoo! TV Widgets, among other things – while two sets, the Vizio XVT3D476SV and XVT3D556SV, have Google TV functionality.

All have WiFi b/g/n built-in, and a Bluetooth remote control – complete with a QWERTY keyboard – is standard on many units. Some have LED edge backlighting, others use Vizio’s Smart Dimming system which splits the screen in 32 zones and can adjust backlighting across them accordingly.

There’s also compatibility with Oakley’s “optically correct” 3D glasses, just in case the bundled set aren’t good enough for you. Pricing on the new sets is yet to be decided, but they’ll arrive in the spring. 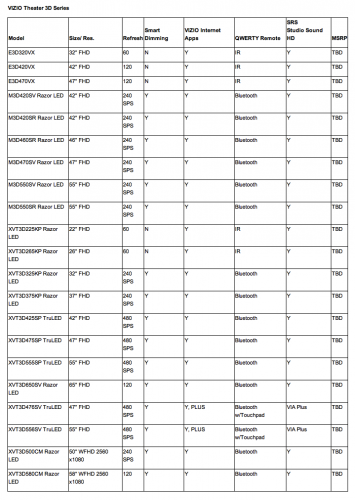 VIZIO Announces Full Line of Theater 3D™ HDTVs in Sizes Ranging from 22 to 71 inches – Brighter, Flicker-Free 3D with Superior Performance for Everyone