Further details on Vizio’s Android powered tablet and smartphone have emerged, with the company confirming that the Via Phone and Via Tablet will come with IR blasters to allow them to double as universal remote controls for your home A/V setup. Both devices have a 1GHz processor, WiFi b/g/n and Bluetooth, along with HDMI, GPS and a microSD card slot. They’ll play particularly nicely with VIA Plus, Vizio’s new Google TV based range of HDTVs and Blu-ray players.

The Vizio Via Phone is fronted by a 4-inch capacitive touchscreen and has a front-facing camera for video calls – previously tipped at 2-megapixels – and a 5-megapixel rear camera. Meanwhile the Vizio Via Tablet has an 8-inch capacitive touchscreen and a front-facing camera; it also gets three speakers which the company says is to provide “stereo audio in both portrait and landscape modes.”

VIA Plus HDTVs and Blu-ray players, meanwhile, will include Bluetooth QWERTY universal remotes (each with a touchpad) along with dual-band 802.11n wireless. Still no word on when the devices will arrive on the market, though Vizio will be showing them all off in private at CES 2011 later this week. 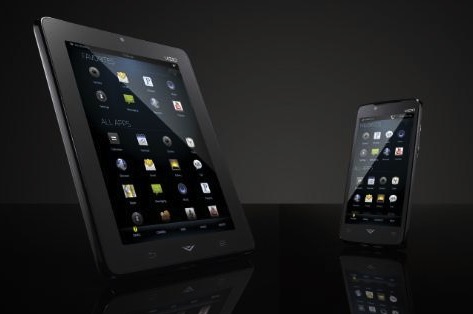 – Part of the VIA Plus Ecosystem, the VIZIO smartphone and tablet Feature a Unified and Intuitive User Experience to Simplify Today’s Connected Lifestyle

– The VIZIO smartphone features a 4″ high-resolution capacitive touch screen with 5 Megapixel camera for photos and HD video capture, and a front-facing camera for video chat

IRVINE, Calif., Jan. 3, 2011 /PRNewswire/ — VIZIO, America’s #1 LCD HDTV Company*, announced today it is expanding into the mobility category with the VIZIO smartphone and tablet (referred to as the “VIA Phone” and “VIA Tablet” below) — both part of the VIA Plus ecosystem, the next generation of VIZIO Internet Apps™, that features a unified, sophisticated and intuitive user experience across multiple CE devices including VIZIO HDTVs, Blu-ray players, smartphones and tablets.

“Both the VIA phone and tablet feature the highest performance coupled with innovative features that tie them into the media consumption experience,” said Matthew McRae, Chief Technology Officer at VIZIO. “And by integrating the VIA Plus user experience also found on our next generation TVs and Blu-ray devices, VIZIO is delivering the multi-screen, unified ecosystem others have talked about for years and never delivered.”
The VIZIO VIA Phone features a 1 GHz processor, 4″ high-resolution capacitive touch screen, 802.11n Wi-Fi and Bluetooth connectivity, GPS, a MicroSD card slot for memory expansion and HDMI output with HD video playback. It also features a front-facing camera for video chats and a 5 megapixel rear camera for photos and HD video capture.
The VIZIO VIA Tablet also features a 1 GHz processor, with an 8″ high-resolution capacitive touch screen, 802.11n Wi-Fi and Bluetooth connectivity, GPS, a MicroSD card slot for additional memory expansion, HDMI output with HD video playback, and a front-facing camera for video chats. It also boasts a unique three-speaker design for stereo audio in both portrait and landscape modes.
Both devices include a built-in IR blaster with universal remote control app for quick access to the entire home theater or nearly any other CE device in the home. Both run on the Android™ Platform, which will also allow users to access thousands of apps through Android Market™.
“As part of the VIA Plus ecosystem, the VIA phone and tablet are natural extensions of the HD entertainment experience that historically has centered around the TV,” added Mr. McRae. “Whether consumers are looking to enjoy content on the big screen, on their tablet or on a mobile phone, VIA Plus delivers on the promise of Entertainment Freedom for All by creating a rich and consistent user experience across all devices that’s accessible to everyone, from the power user to the casual browser.”
VIZIO will be demonstrating the VIA Phone and VIA Tablet in their private CES showcase at the Wynn Hotel from January 6 to 9, 2011.
*Sources: Q3 2010 iSuppli and DisplaySearch Reports

VIZIO Announces VIA Plus, the Connected CE Ecosystem that Delivers a Unified User Experience From the Big Screen to Mobile Devices

– VIA Plus to provide seamless entertainment freedom for all across VIZIO’s line of HDTVs, Blu-ray Players, SmartPhones and Tablets

– VIZIO Smartphone and Tablet based on the Android™ Platform to feature built-in IR blaster with universal remote control app, HD playback with HDMI output, and access to thousands of apps in Android Market™

IRVINE, Calif., Jan. 3, 2011 /PRNewswire/ — VIZIO, America’s #1 LCD HDTV Company*, announced today the VIA Plus ecosystem, the next generation of VIZIO Internet Apps™ that will provide consumers with a connected CE experience unlike any other. The new ecosystem will allow for unified on-demand content and application consumption across multiple consumer electronic devices including VIZIO HDTVs, Blu-ray players, SmartPhones and Tablets.
“The promise of a unified consumer experience across multiple screens and devices has been unfulfilled until now,” said Matthew McRae, Chief Technology Officer at VIZIO. “With VIA Plus, VIZIO is delivering the first true integrated ecosystem across multiple classes of devices and enabling a simple yet powerful interface for consumers to enjoy their applications, services, and content.”
VIA Plus expands upon the VIA experience and extends it to new devices creating a world-class connected ecosystem that combines the latest technologies and a unified user experience to provide the very best HD entertainment experience. Consumers will be able to begin content consumption from one device and seamlessly transition the content to another device allowing entertainment to be continuously enjoyed anywhere and anyplace without interruption.
VIA Plus HDTVs and Blu-rays will incorporate Google TV and feature a premium Bluetooth QWERTY universal remote with touchpad, dual-band 802.11n built-in wifi and enhanced onscreen navigation including search and web browser.
The VIA Plus Phone and Tablet will be based on the Android Platform and feature built-in IR blaster with universal remote control app, HD playback with HDMI output, and access to hundreds of thousands of apps in Android Market.
“In the upcoming era of connected digital devices, we believe the companies that stand the best chance of success are those that realize the consumer experience isn’t just about hardware. Rather, it’s the integration of hardware, software, and services toward a specific usage model that will ultimately offer a unique and potentially lasting consumer experience,” said Richard Shim, mobile computing analyst with DisplaySearch. “One of the usage models that we believe can be addressed most readily is the consumption of high-quality digital entertainment.”
More Freedom with VIA Plus
With VIA Plus devices, consumers will be able to search, organize and access their favorite apps more easily than ever. At its core, the VIA Plus experience is a unified, consistent and intuitive user interface that allows consumers in just a few clicks to quickly group favorite apps by categories, customize the dock with their most frequently accessed apps or switch apps with the multitasking bar.
“We know we have tremendous interest and support from our current distribution for new VIA devices, but always are mindful of what the end user wants. With the proliferation of platforms and apps now available to connected devices, navigating and learning different interfaces can be frustrating to end users,” said Mr. McRae. “With that in mind, VIA Plus presents a simple, consistent, and elegant interface so users can quickly access the entertainment they seek on devices from a 4″ mobile phone to a 65″ Theater 3D HDTV.”
VIZIO will be demonstrating VIA Plus devices in their private CES showcase at the Wynn Hotel from Janurary 6 to 9, 2011.
*Sources: Q3 2010 iSuppli and DisplaySearch Reports
Source: VIZIO, Inc.