The folks behind Virgin Galactic – cousin of the earth-bound Virgin Airlines – have lit their first rocket motor test on a ship that may one day bring everyday citizens on joy rides to space. The craft being tested this week goes by the name SpaceShipTwo, also known as SS2, it being one of several craft eventually set to offer brief flights to what Virgin Galactic calls “the edge of space” and back.

This initial test was done at a runway at California’s Mojave Air and Spaceport this morning – Monday, that is, the 29th of April. This test was done with carrier mothership WhiteKnightTwo, it carrying SS2 to an altitude of around 47,000 feet (14,300 meters) where the smaller craft test-fired a rocket engine that would, or will, eventually carry it to its space-bound top height.

This test is only the very first in a set of tests that will eventually prove the craft viable for real human use. British billionaire Sir Richard Branson, owner and founder of Virgin Galactic, Virgin Airlines, Virgin Mobile, etc, spoke this morning of the event in brief, suggesting his day thus far has been “ridiculously exciting”. With flight tickets set at the moment at an expected two hundred thousand dollars a person, it’s not difficult to see more than one reason why Branson would find this day a positive one.

According to Virgin Galactic, they plan on running their first official full space flight by the end of the calendar year. This flight may or may not be working with user-purchased tickets at that time.

Virgin Galactic is a concept born not just of Branson’s wishes to head to space, but of the company’s ever-expanding aims to bring consumers entertaining experiences in travel. Such is a flight aboard a Virgin Airlines flight, complete with posh interiors and wireless phone chargers in specialized waiting rooms at the airport. After Virgin Galactic takes off for real, we expect Virgin Volcanic to head below our Earth with a giant drill – it’d only be right. 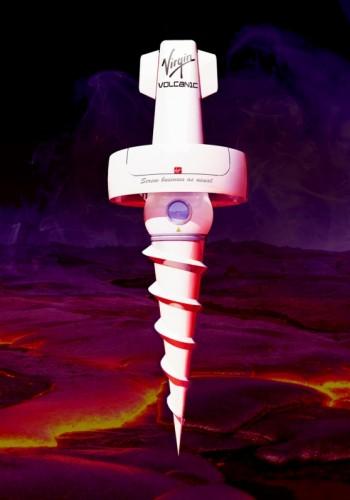 UPDATE: A video has been released showing this event, specifically the bit where the SpaceShipTwo breaks the speed of sound – watch for it now.