Virgin Galactic’s SpaceShipTwo unexpected deployed its “feathering” system shortly before crashing, the National Transportation Safety Board investigators have said of the incident on Friday last week, which saw one pilot killed and another seriously injured. “About nine seconds after the engine ignited, the telemetry data told us that the feather parameters changed from lock to unlock,” NTSB acting chairman Christopher Hart revealed during a press briefing today, something which took place on the fateful test flight at Mach 1.0 – the speed of sound – but which should not have happened until around Mach 1.4.

NTSB’s investigators “found almost all of the important parts of the space vehicle that we need in order to complete our investigation,” Hart said today, covering a crash site approximately five miles long.

Among the recovered components were the fuel tanks, oxidizer tanks, and the engine of SpaceShipTwo, none of which showed any sign of burn-through or being breached, Hart revealed..

“We are a long way off finding cause,” he insisted, pointing out that “we have extensive data sources to go through.” However, there’s already a glaring departure from normal practice in the cockpit.

The feathering system – the trailing aerodynamic components behind SpaceShipTwo – is usually put into action at the apogee or highest point of the flight. The trailing feathers shift upward, slowing the craft as it re-enters the atmosphere.

“Approximately two seconds after the feathering parameters indicated that the lock/unlock lever was moved from locked to unlocked, the feathers moved toward the extended – the deployed position – even though the feathering handle had not been moved,” Hart explained. “This occurred at a speed just above approximately Mach 1.0.”

Hart, who brought two models of the Virgin Galactic ship on-stage to demonstrate the change in aerodynamic components, said that in-cockpit recordings showed that the feather lock/unlock lever was moved by the copilot from lock to unlock. 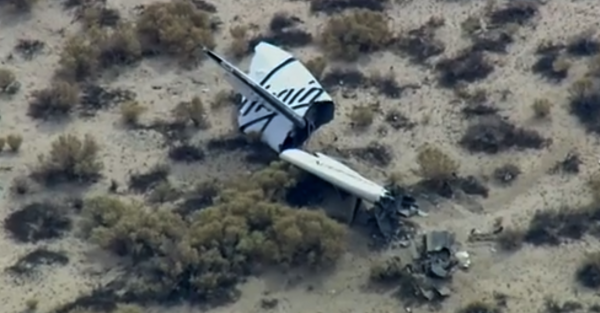 Virgin Galactic founder Richard Branson had said over the weekend that, assuming any technical issues could be overcome, “the dream lives on” for his space tourism plans. In a subsequent statement, Virgin Galactic argued that it was “not the time for speculation” over the root cause.

“Everything we do is to pursue the vision of accessible and democratized space – and to do it safely. Just like early air or sea travel, it is hard and complicated, but we believe that a thriving commercial space industry will have far reaching benefits for humanity, technology and research for generations to come. This is an important mission and we have been overwhelmed and grateful for the outpouring of support we have received from our future astronauts, friends in the industry and people all over the world who are inspired by the work our industry is doing and who are urging us to continue” Virgin Galactic

The feathering system was first demonstrated in-flight back in 2011: