Toyota has picked a wireless charging system for its upcoming hybrid and EV cars, adopting WiTricity ahead of formal trials of the technology beginning in 2014. Set to appear on the next-gen Prius and other eco-friendly cars from Toyota, the company confirmed to us back in August, the system will allow drivers to recharge their car batteries simply by parking on top of a special electromagnetic-resonant transmitters that could take the form of simple mats or be embedded into parking spaces.

In the process, Toyota believes it will address one of the lingering pain-factors of EV ownership: having to plug it in. While it’s unclear whether the hassle of hooking up a traditional, wired charger is a real chore for EV drivers or merely a psychological block to adoption, either way the flexibility of being able to recharge simply by pulling up in the right spot could make ownership even easier.

Toyota’s decision to go with WiTricity’s wireless charging system doesn’t exactly come as a great surprise. The car manufacturer invested in the MIT spin-off back in 2011, and has “cooperated technically with the company for the past several years” it says on the development of the car-capable system.

Neither Toyota nor WiTricity intend to actually produce the wireless chargers themselves, however. Toyota will outfit future hybrid and full-electric vehicles with the necessary receiver coils, presumably as an option rather than as a standard-fit item, while leaving the chargers to third-party manufacturers licensing the tech from WiTricity.

Although fundamentally similar to wireless chargers seen on smartphones in recent years, WiTricity’s system differs in that it uses more tuned transmitter and receiver coils. That “strongly coupled” resonance allows for greater power transmission efficiency, essential if cars are to recharge in a timely manner. 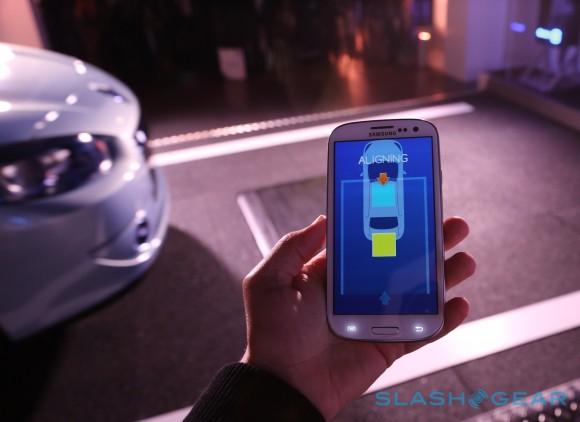 Exactly how long the system will take in comparison to, say, a standard 110V or 240V wired charger is unclear, though the wireless nature of the system does open the possibility for more transient top-ups. Rather than requiring the car to be parked up and plugged in, the charging mats could feasibly be put down at intersections and other points where drivers pause, cumulatively adding to the overall battery life.

That’s going to require some real investment, however, and Toyota is still yet to begin public trials. It’d also benefit from some collaboration with other car manufacturers, since the industry is yet to settle on a single standard: Qualcomm has its own Halo system, for instance, while Mitsubishi is working on its own alternative, among others.