This tiny button could solve the IoT’s big headache

Controlling your digital life from your smartphone, or even by voice, is great, but there are times when it’d be a whole lot more convenient to reach out and stab a physical button. That’s the idea behind Flic, crowdfunding success from late last year, and here at CES to show off what you can do with a tiny stick-on button, long-lasting battery, and a few simple conditional rules. Flic’s primary target is smartphone users looking to gain swifter access to a couple of key features, but as I played with the rubber-coated key I realized it comes surprisingly close to the perfect IoT control.

Flic’s premise is simple – a programmable button you can assign to different features on your smartphone or tablet – but actually delivering that in an approachable way hasn’t been especially straightforward.

On the hardware side, the Flic is roughly coin-sized, coated in one of four soft-touch finishes, and powered by a button battery. Thanks to Bluetooth Low Energy, only turning the key on when it’s actually pressed and then leaving it in standby the rest of the time, the Flic team estimates battery life at around five years or 60,000 clicks.

While there’s only one button, up to three different triggers can be programmed: click, double-click, and hold. That’s all programmed through the companion app for iOS or Android, and can be assigned to things like Spotify playback or calling certain contacts, or through IFTTT and the wealth of connected devices that service has access to.

Flic also has an SDK for apps wanting to directly integrate triggers into their software – bypassing the Flic app itself altogether.

The assignments are stored in the app, not in the button itself, but are synchronized through Flic’s cloud service so that any device signed in will trigger in the same way. Because of that, even if the device that was used to program the button initially isn’t within range, on a click it will effectively wirelessly bleat until another registered device responds.

It’s that fact which makes Flic potentially the universal button IoT and smart home enthusiasts have been crying out for. With a 150 foot (roughly 50m) range, the key upstairs in the bedroom could potentially be communicating with the tablet you might leave on the coffee table in the lounge – normally left there to control the SmartThings or Sonos app perhaps – rather than to your phone.

Paired with the fact that you can have effectively limitless Flic buttons in service at any one time, and you’re looking at a very capable replacement for the physical switches that have so far sat uneasily with DIY smart home systems. Wireless light bulbs are far more flexible than their traditional forebears, certainly, but having to reach for an app to control them rather than a switch on the wall can be annoying. Philips’ hue tap switch has tried to address that, but so far it’s only compatible with the company’s own bulbs. 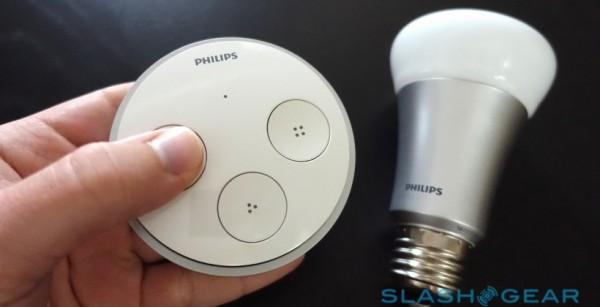 Flic, though, could handle hue – through IFTTT currently, though the startup told me unofficial communications with Philips are underway – as well as a wealth of other devices and services. With a choice of self-adhesive or clip back panels, it would be easy to install, and at under $30 apiece it’s cheaper than hue tap too.

The Internet of Things and the smart home are still in their infancy, but if they’re to appeal to more than a geek audience then they need to fit in with those users who aren’t glued to their smartphones for every service. Sometimes, a button really is the best way of interacting, and at first glance when Flic starts shipping from March, it may be the first to truly fit the bill.