This next iPhone 5G magical feature is “nearby” Android and Samsung, too

Several companies are developing a feature that, depending on who you ask, requires 5G connectivity for their next phone. This feature takes a few different forms but is, at its core, all about hyperlocal sharing. For Apple it’s their newest version of AirDrop, using Ultra Wideband tech with (for example) the iPhone 11 and the U1 chip – they call it “spatial awareness” and it’s in the process of being developed (in a slightly different iteration or two) by Samsung for Galaxy phones and by Google for Android phones, too.

The key with this next-generation feature collection (from Samsung, from Google, from Apple), is the seemingly magical appearance of phones when they get near other phones. These features aren’t strictly new – it’s their implementation and their eventual marketing as an at-least-partially “new” feature set that’s important. With the 5G era comes expectations of magical speed – and here’s what Samsung, Google, and Apple seem to have to bring that magic.

Samsung has a solution that’ll make the most of the 5G speeds at which next-generation Galaxy S20 devices will be able to connect. Data will be moved up to the Samsung cloud – ideally as fast as possible – then back down to another Samsung device with super speed. Quick Share is a new iteration of similar features Samsung’s ran with in the past. 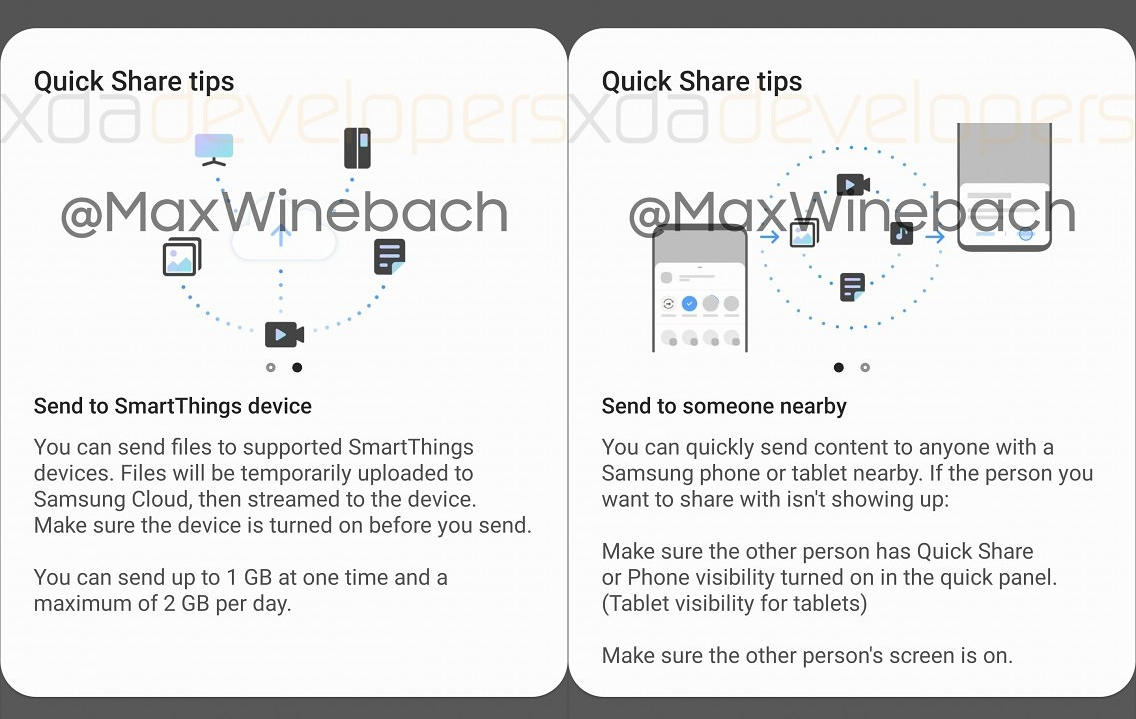 Google’s nearby sharing feature is… Nearby Sharing

Google’s Android-based Fast Share was leaked as far back as June of 2019, now appearing as Nearby Sharing in the latest leak here in January of 2020.

Google and Samsung are building on expectations for the dawn of 5G connectivity. Google’s solution does not directly depend on 5G mobile data connectivity, while Samsung’s definitely could benefit from 5G speed. Apple’s iteration of this realm of super fast magical connectivity between smartphones at a hyperlocal level is Ultra Wideband technology and spatial awareness, starting with their newest version of AirDrop. 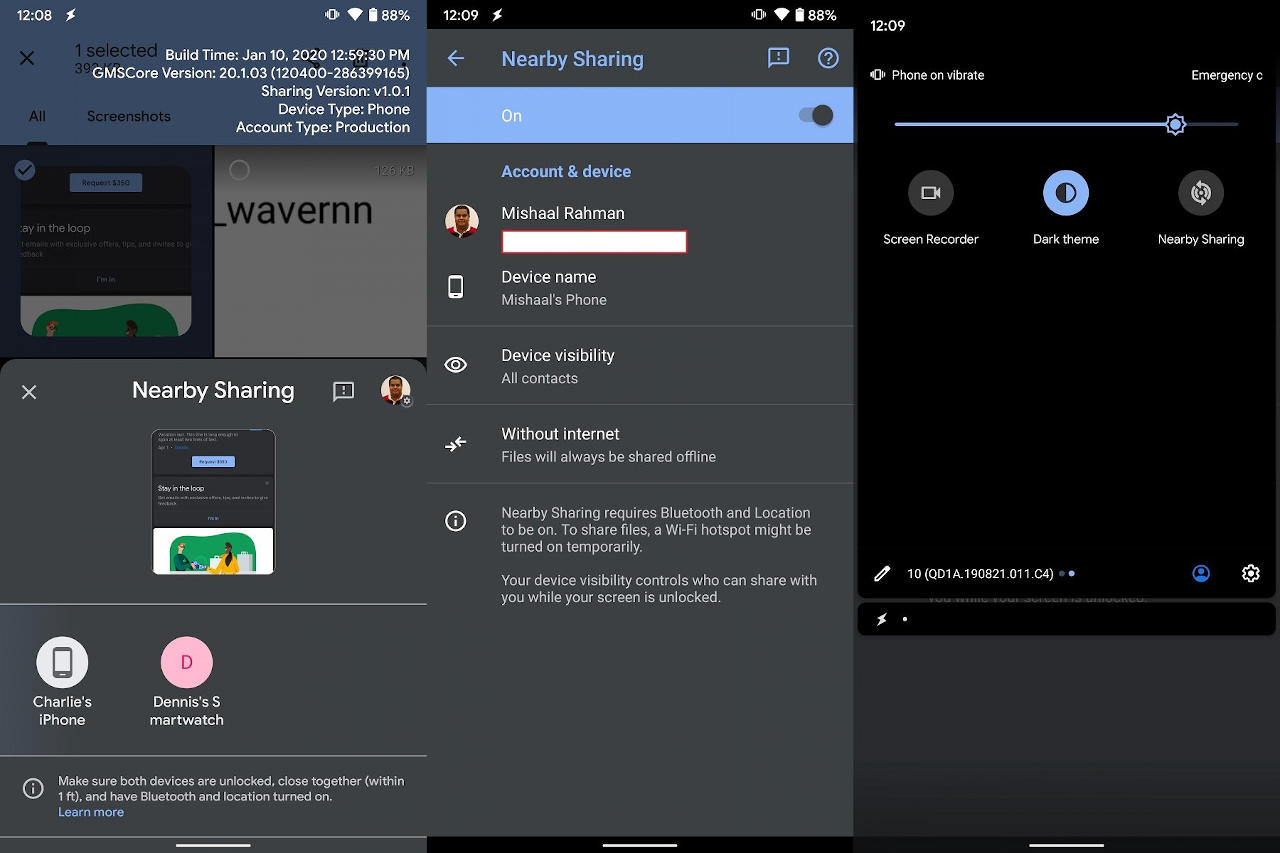 Apple’s keywords for this next-wave “that’s a cool thing your phone can do” feature set are: “spatial awareness”, “Ultra Wideband technology”, and the newest iteration of AirDrop. The first example of this tech came with the iPhone 11 and iPhone 11 Pro, but Apple did not make a major deal of the feature because it’ll play a larger role in the 2020 collection of Apple phones – which in turn will be able to interact with iPhone 11 and 11 Pro in full effect. 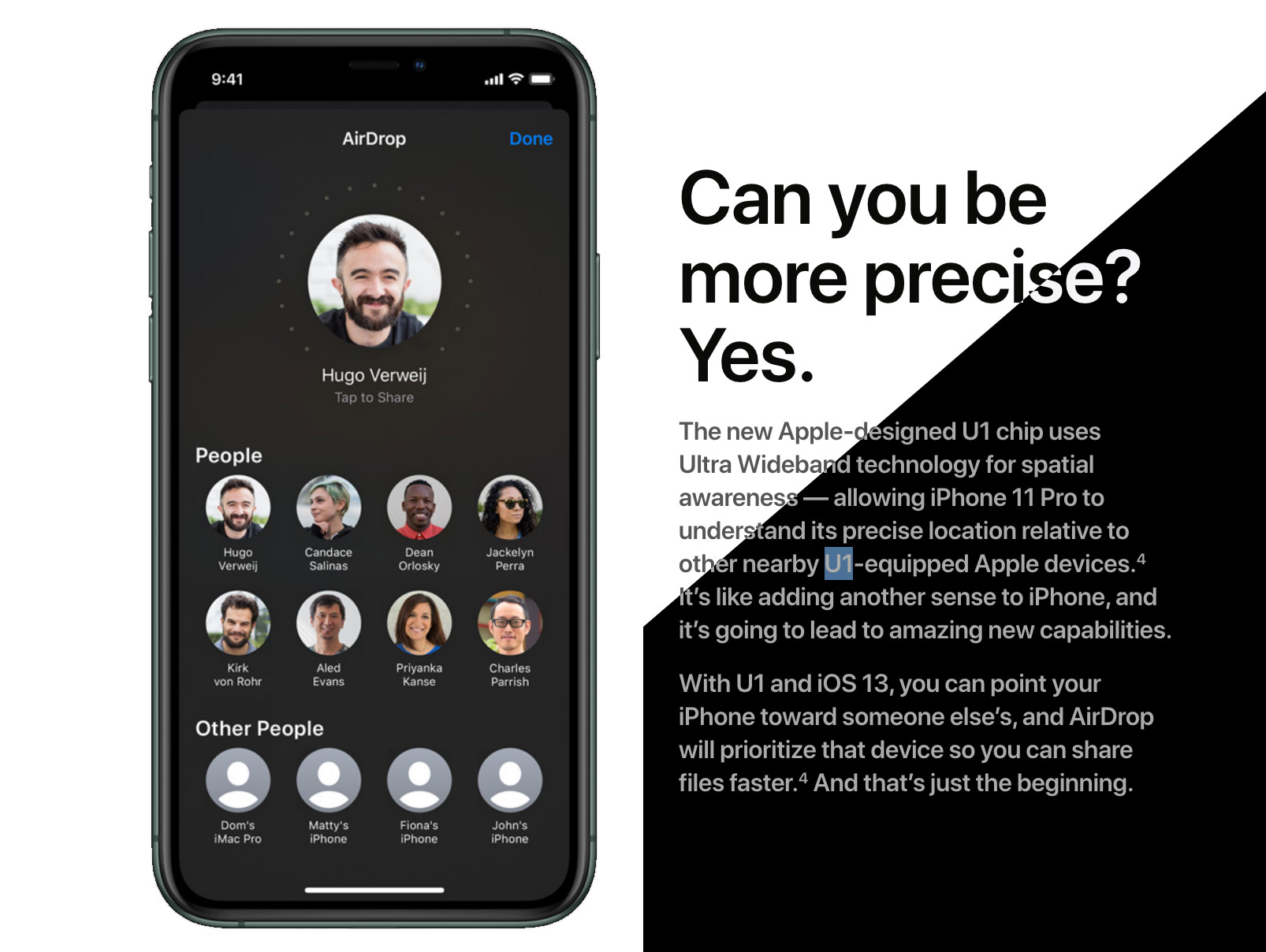 “So if you want to share a file with someone using AirDrop, just point your iPhone at theirs and they’ll be first on the list,” said the listing for iPhone 11. The iPhone 11 Pro listing added: “It’s like adding another sense to iPhone, and it’s going to lead to amazing new capabilities.”

And here’s the key – after again describing the tech’s ability to enhance the functionality of AirDrop, the Apple text added: “And that’s just the beginning.” Some functionality appeared last year – the big jump appears to be arriving with iPhone 5G devices here in 2020.

While Apple’s tech doesn’t require 5G connectivity, it’ll certainly play off the expectations users have and will have for the significantly faster data speed. To surprise and delight users, this system will make the iPhone feel magical in a brand new set of ways.